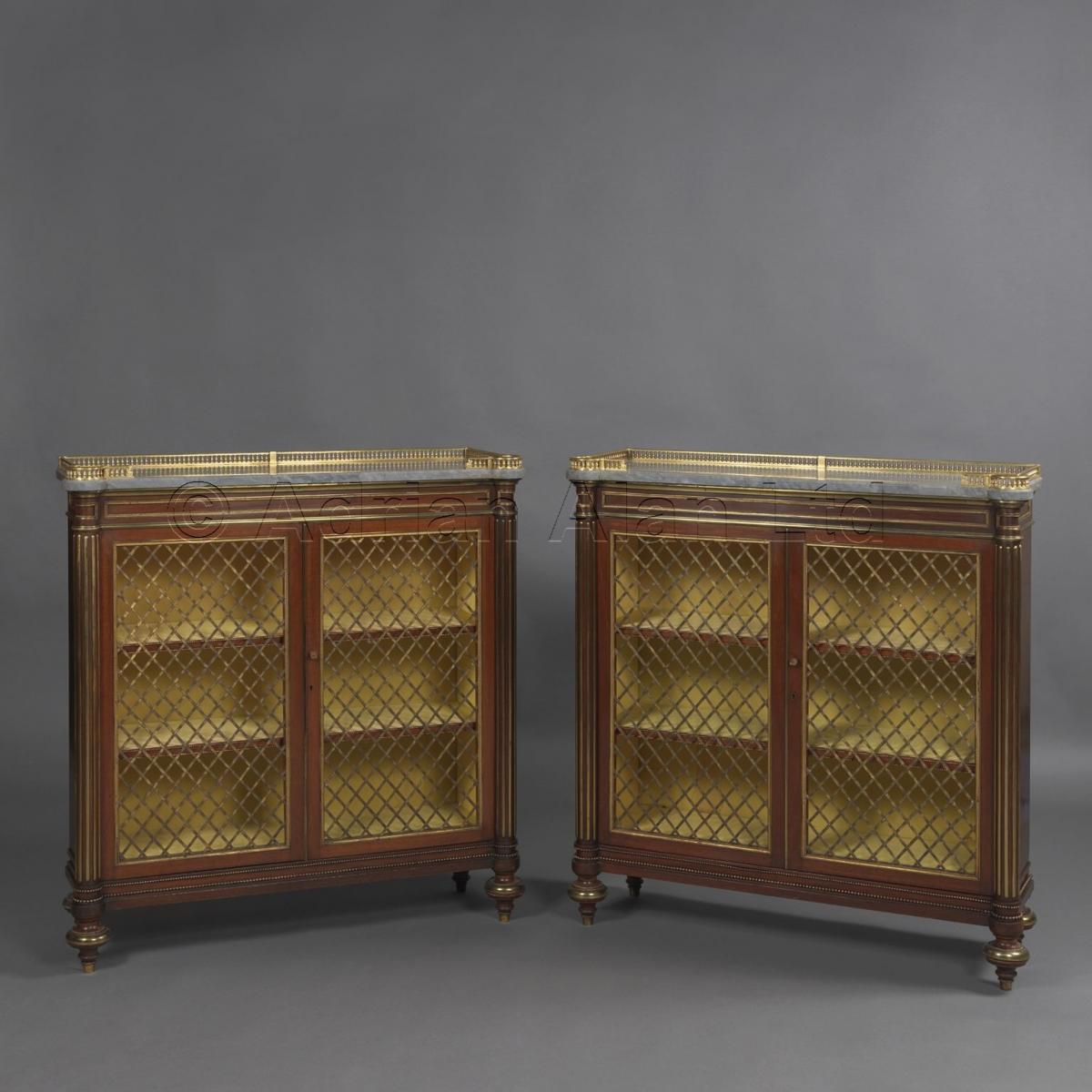 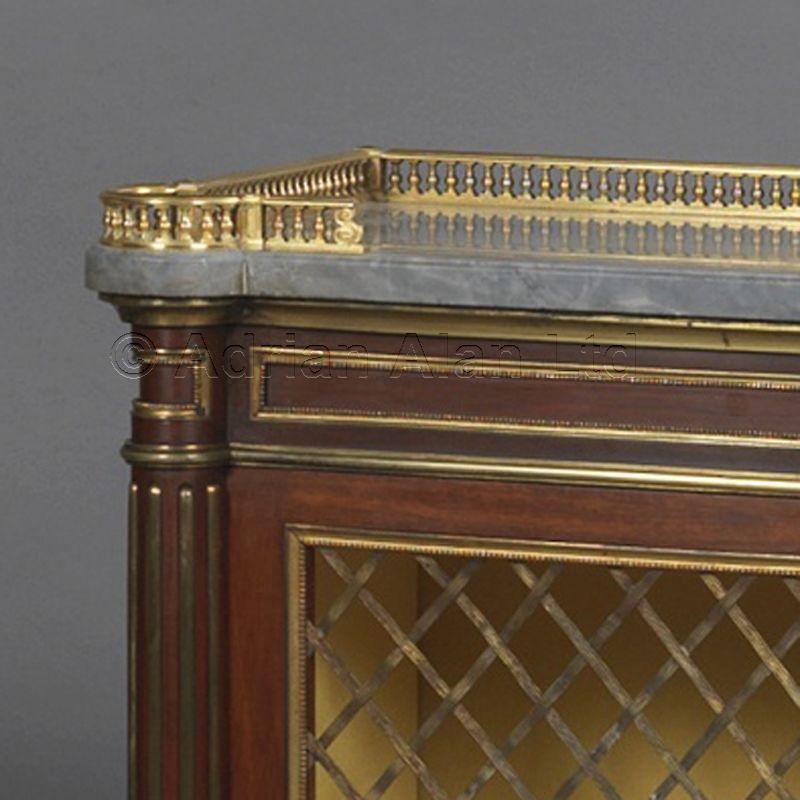 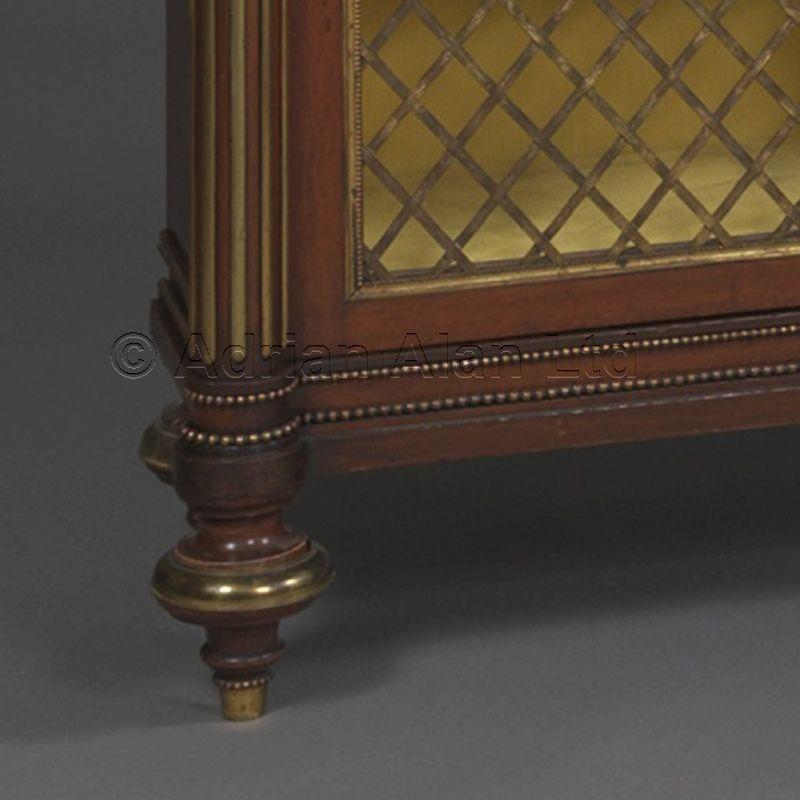 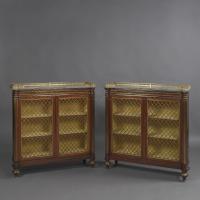 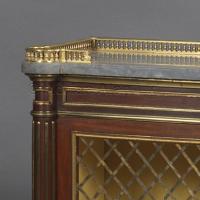 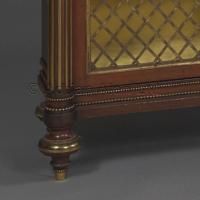 A Fine Pair of Regency Gilt-Bronze Mounted Mahogany Dwarf Bookcases With Grey Marble Tops in the Manner of George Bullock.

Each bookcase has a grey marble top with rounded corners surmounted by a pierced brass gallery, above a pair of doors fitted with grills, flanked by fluted columns and raised on turned and tapering feet.  The interior of each bookcase silk lined and fitted with two brass beaded shelves.

George Bullock (1777-1818) was a cabinetmaker appearing to have worked both in London and Liverpool. There is little record of his early career other than a superb wax, depicting a figure seated in an interior in the collection of Leeds Art Galleries. This depicts Henry Blundell of Ince and is signed 'G. Bullock 1801'.

In 1804 Bullock showed at the Royal Academy a marble bust of Blundell, which is now in the Walker Art Gallery, Liverpool.

By 1815, he was established as 'Sculptor, 4 Tenterden Street, Hanover Square, Mona Marble and Furniture Works, Oxford Street'. These were his premises until his death on 1 May 1818.

Bullock used a wide range of exotic woods and marbles in his furniture designs. Later in his career however he made a particular virtue of using native British woods and marbles. There were strong commercial and patriotic reasons for this during the Napoleonic wars, but interestingly a similar move towards native woods also took place in France. In a geological lecture in Liverpool a Mr. Bakewell described Mona marble as 'a beautiful Green Stone which is found in part of the island of Angelsea the property of Mr. George Bullock'. Bullock also used Scottish marbles.

Bullock's furniture was far more assertive in its character than was usual in his day, and the ornament both in the form of its finely modelled bronze mounts and the Boulle and marquetry of various woods and metals is highly stylised and dramatic. His use of native woods and marbles was often commented upon:

While most of his furniture was Neoclassical in style, some was Gothic, Elizabethan and Jacobean and he developed these styles far beyond other designers of his day. How much he designed himself is unknown as no records of his firm survive beyond a book of designs for furniture, interiors and metalwork entitled 'Tracings by Thomas Wilkinson from the designs of the late George Bullock 1820'. (Birmingham Museum and Art Gallery).

Edwards, R 'George Bullock as a sculptor and modeler.'