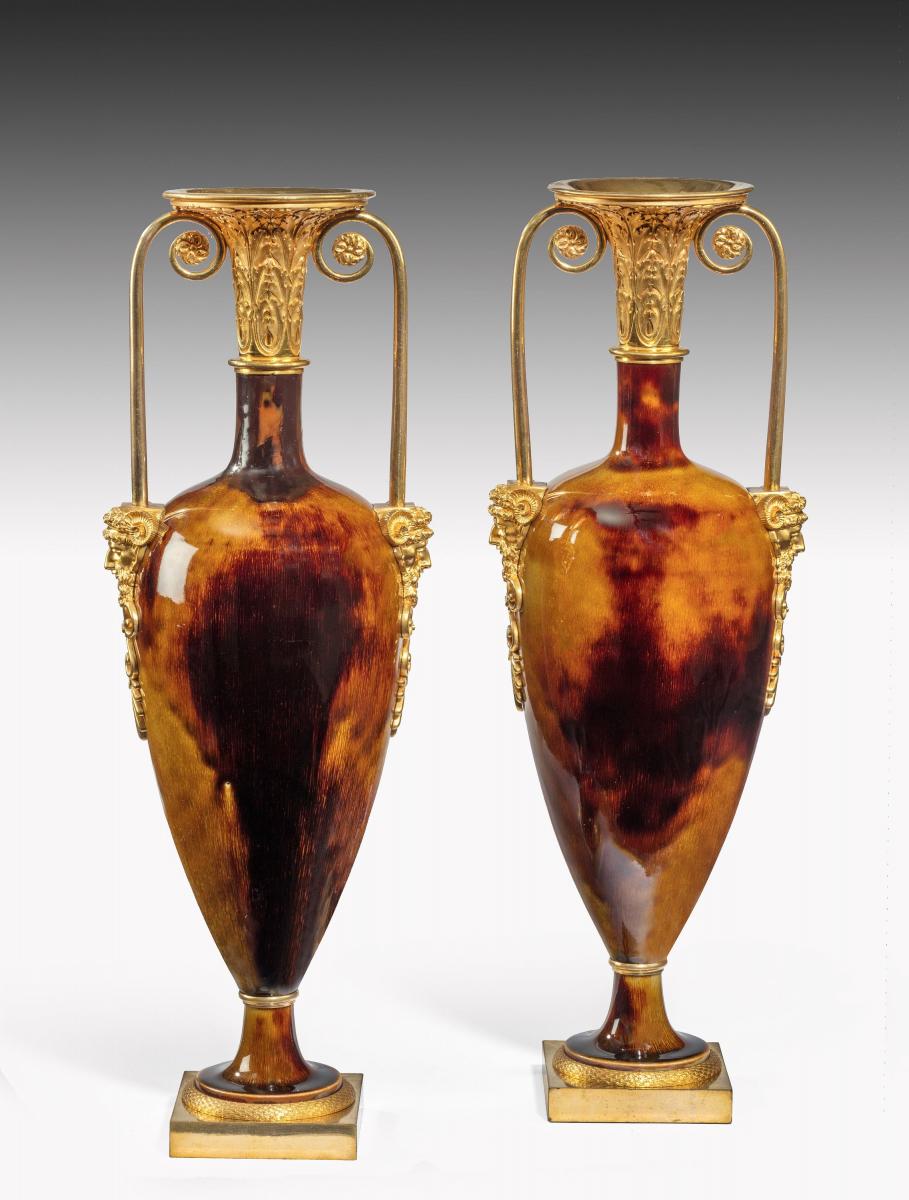 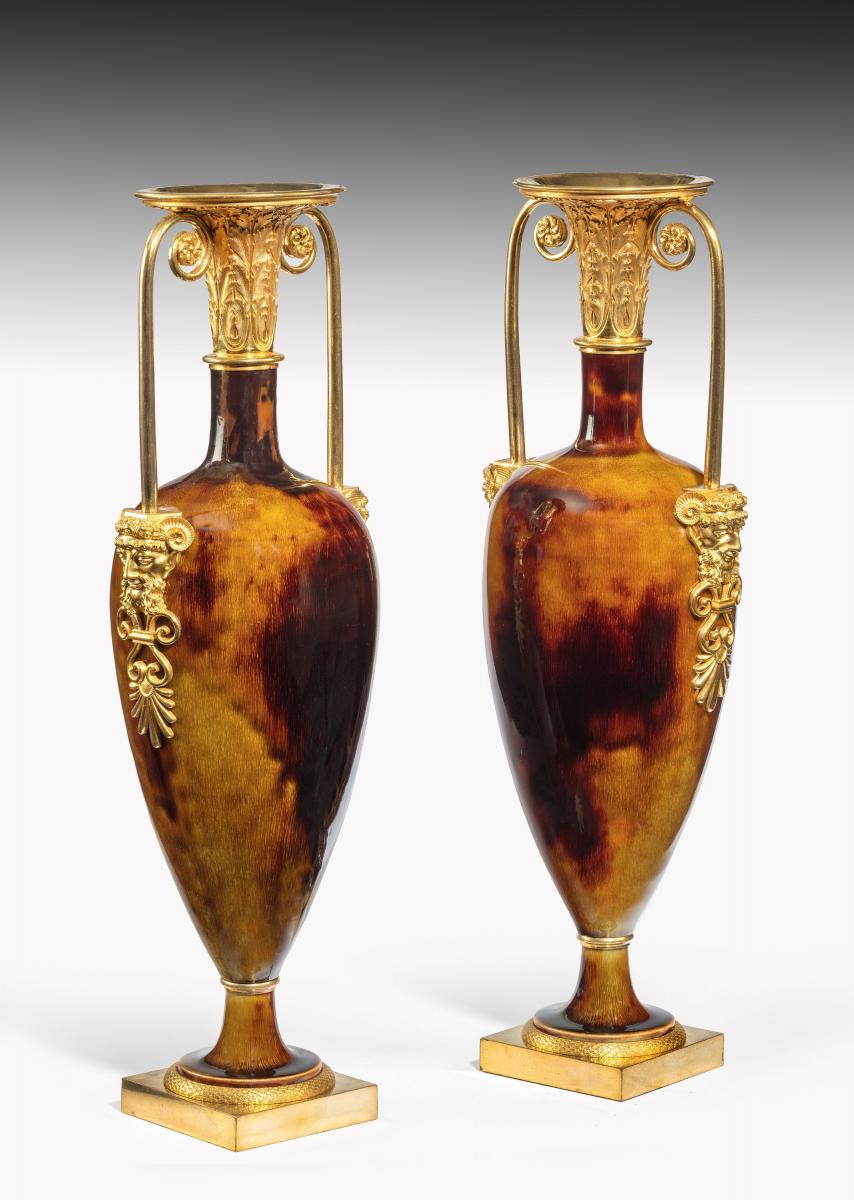 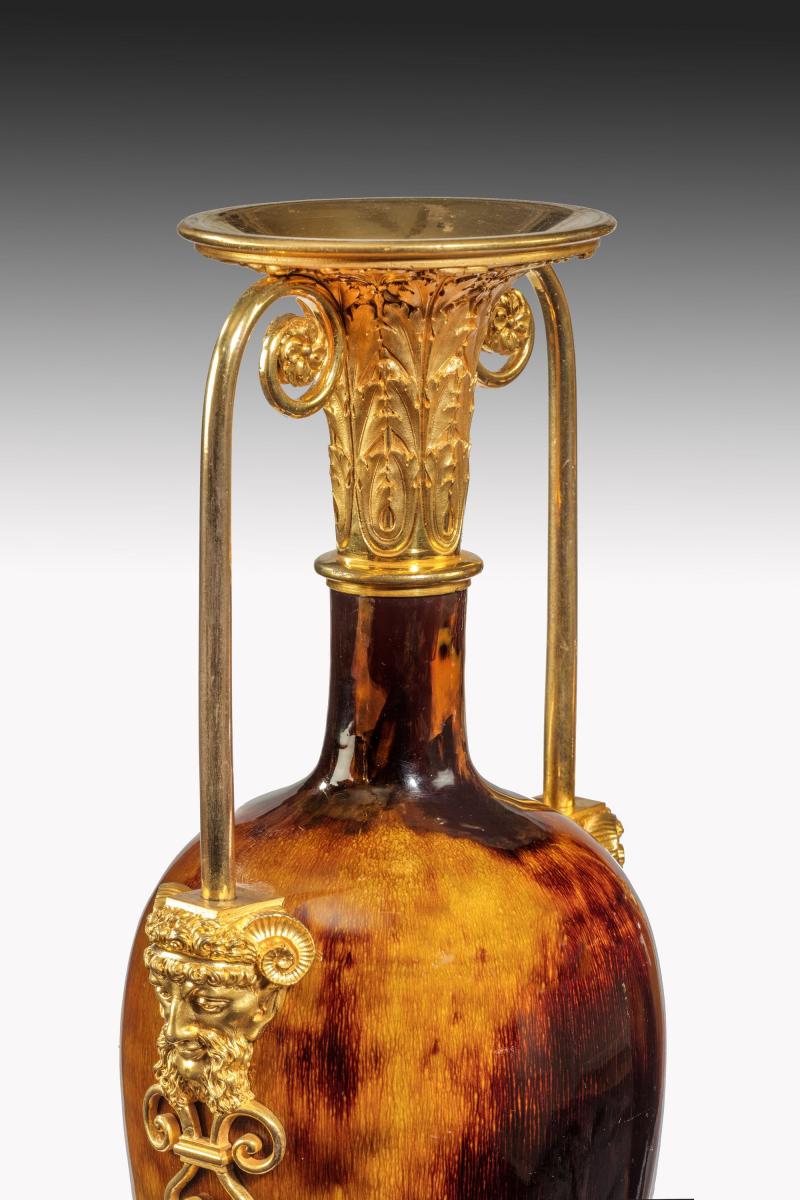 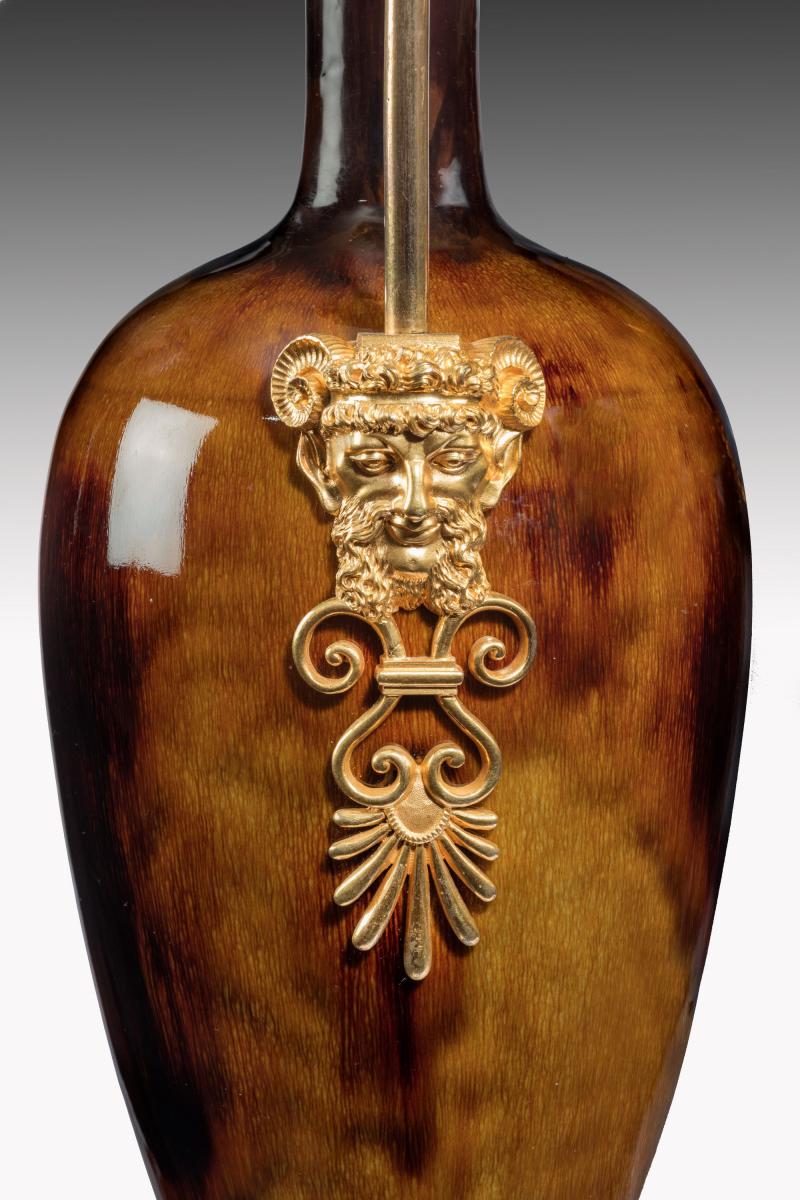 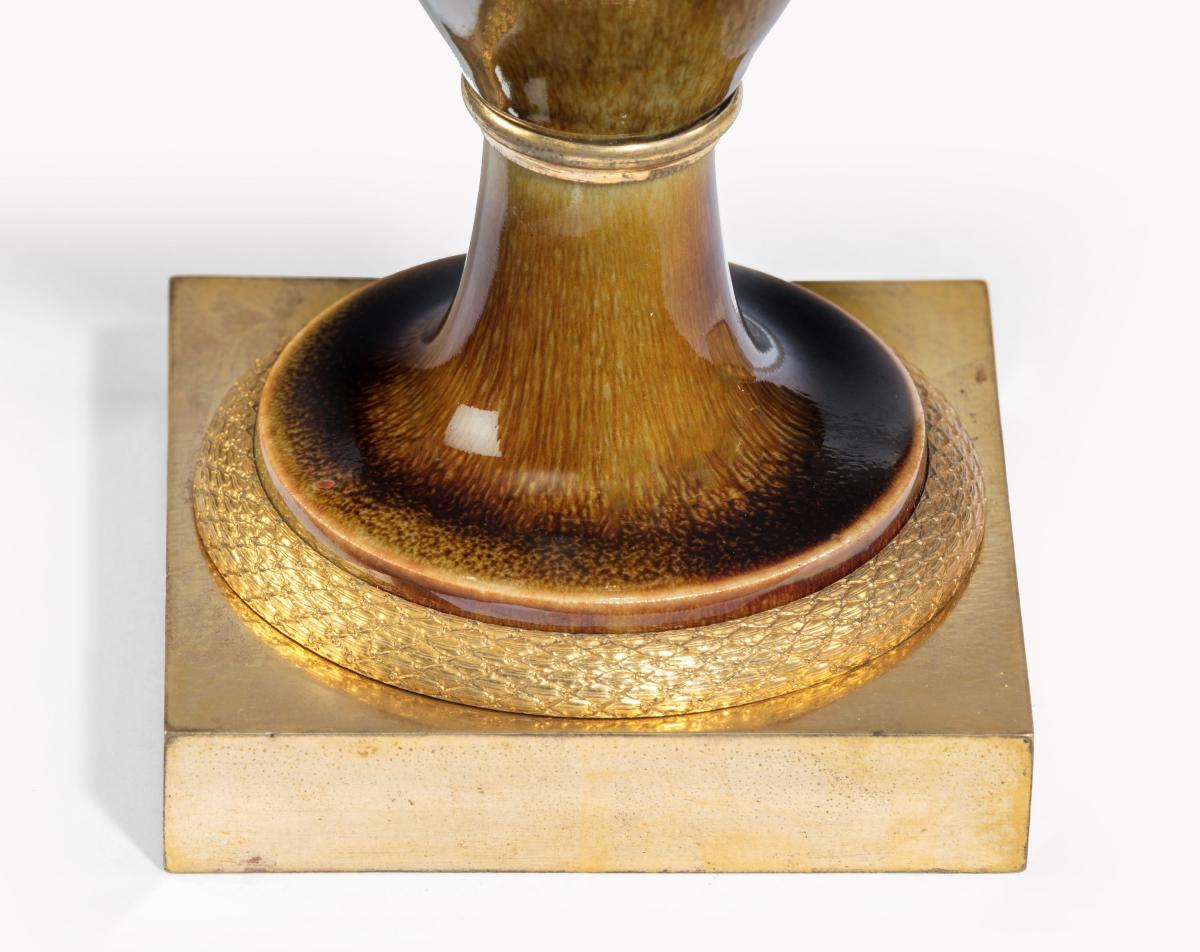 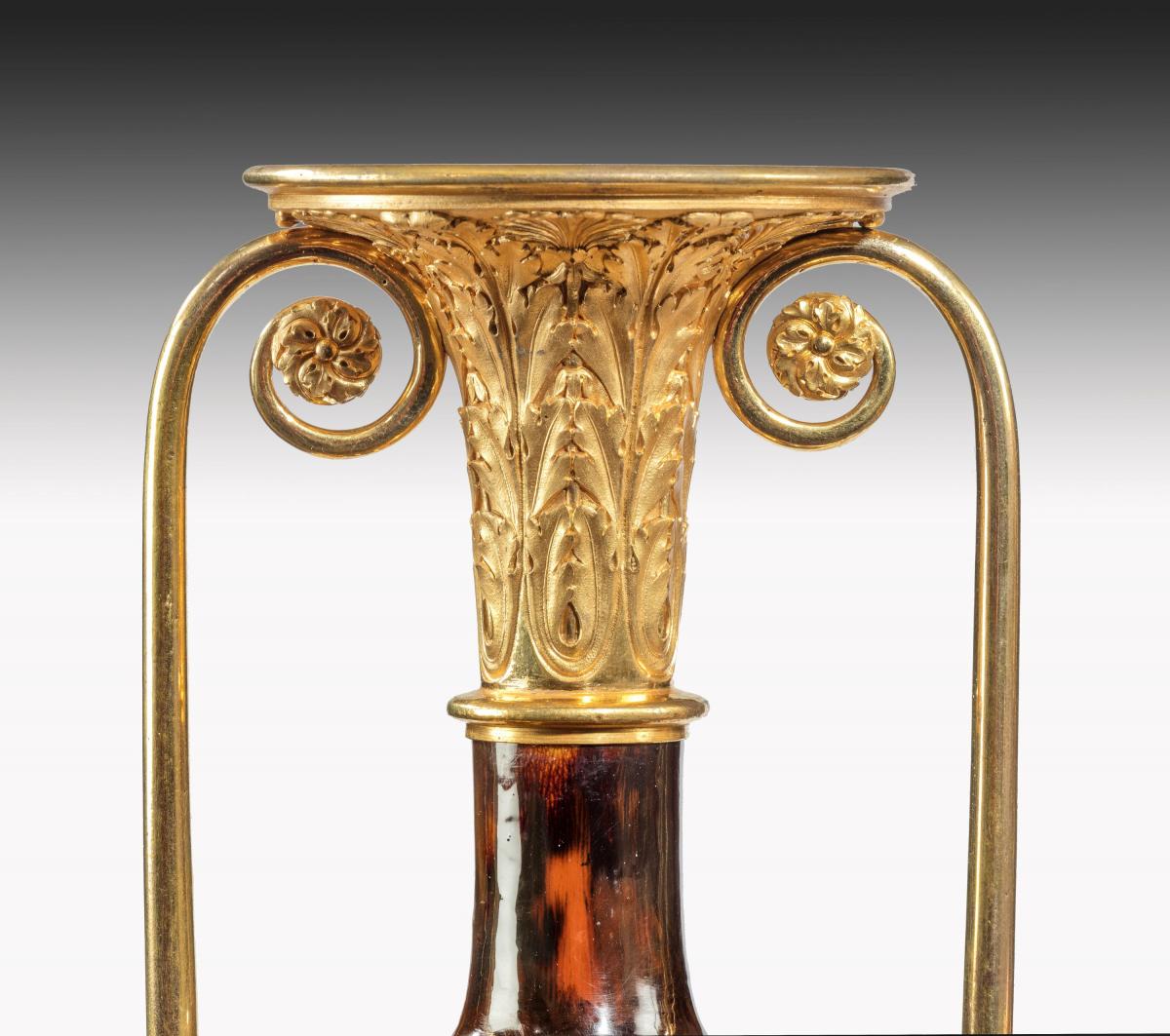 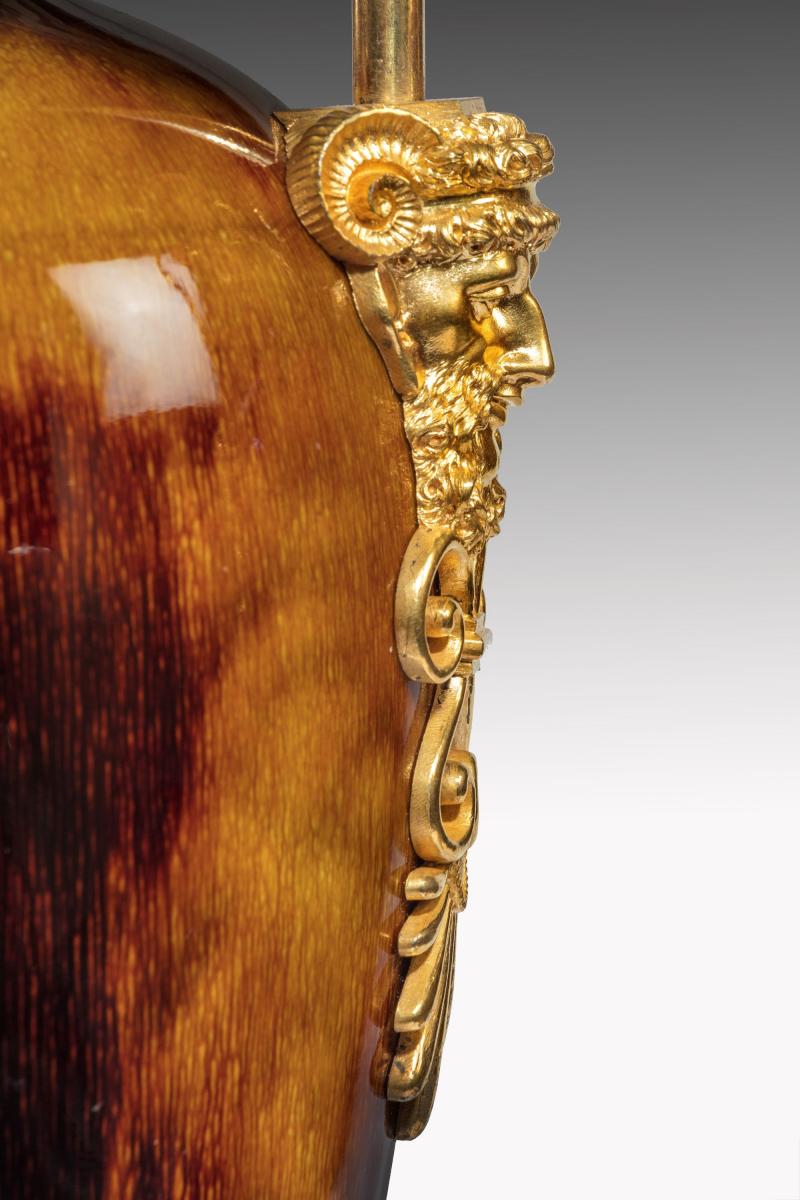 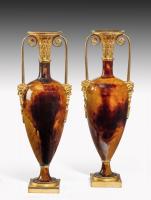 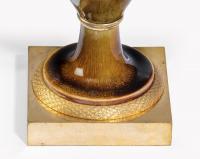 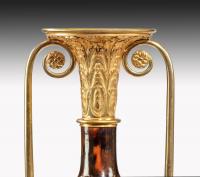 Two tapered ‘fuseau’ vases. Each with an acanthus and anthemion decorated top. With scroll handles and satyr mask terminals. The ‘fond ecaille’ (faux tortoiseshell) bodies set on a square plinth base.

‘Fuseau’ vases: The shape of the ‘fuseau’ vase was typical of the neo-classicism of Napoleon’s reign. Derived from the shape of ancient amphora, to which a foot has been added. The vase rests on a base of gilt bronze and consists of three separate parts: neck; body; and foot. Ormolu fitments between the neck and the body; and between the body and the foot, join the parts together.

Comparators: A similar pair of Empire vases by Dihl & Guérhard were sold in Christie’s ‘Villa Diodati House Sale’ in Geneva on 20th September 1996, lot 135. These vases are of similar height – 19.25 inches (49cm) – and are signed ‘Dihl’ on the base (see image below).

These vases demonstrate how Dihl & Guérhard made porcelain which imitated marble, and used carved and gilded bronze for the ornamentation of amphora-shaped vases. This pair of vases is also flanked by the same satyrs’ heads and palm leaves as appear on our pair of vases (see image below). With the same decoration as our pair of vases – two scrolling handles – and with a flared neck decorated with acanthus leaves. The pedestal is mounted on a square base (http://www.christies.com/lotfinder/lot_details2.aspx?intObjectID=992576). These vases were owned by Henri Samuel (1904–1996), one of the leading French interior designers of the twentieth century, and were housed in his Parisian apartment.

The image below shows a pair of similar French ‘fuseau’ vases by Dihl & Guérhard, circa 1805, and decorated to simulate hardstone, with shaped handles with satyrs’ masks. The ormolu necks of these vases demonstrate fine workmanship and retain the original mercury gilding. The fuseau vase was very popular at Sèvres under Empress Josephine, Napoleon’s first wife. Another vase of the same model, in black porcelain, can be found in The Hermitage Museum in St. Petersburg.

Christoph Dihl, and the firm of Dihl et Guérhard, reached its apogee around this time and, as Dihl himself was a chemist, this type of porcelain decoration simulating hardstone would have been of particular interest to their most discerning of clients. As a result, it is possible that these vases were made by him. Dihl was particularly fond of this type of satyr mask, and various vases made for Napoleon have similar decorative masks.

A pair of vases with a faux tortoiseshell porcelain body, dated circa 1785, and with mounts attributed to Pierre-Philippe Thomire sold at Christie’s ‘Taste of the Royal Court, Important French Furniture & Works of Art from a Private Collection’ sale on 9th July 2015, lot 3 – see image below. The faux tortoiseshell porcelain bodies are similar to those on our pair of vases.

It is interesting to note that Dihl’s portrait appears to incorporate a vase with very similar glazing suggesting it must have been an object he was particularly pleased with.

The factory enjoyed success which continued after the Revolution. The factory suffered financial difficulties in the early 19th Century eventually leading to its closure in 1828.

Thomire trained as a sculptor, before deciding to become a bronzier. He received his training in Pierre Gouthière’s workshop, before setting up his own business in 1775. Thomire began assisting Jean-Claude-Thomas Duplessis, the artistic director of the Sèvres Porcelain Manufactory. After Duplessis’ death in 1783, Thomire took over his job, designing and fitting ormolu mounts at the Sèvres factory. In 1804, Thomire bought the business of a ‘marchand-mercier’ – Martin-Eloi Lignereux. The company employed a large workforce in a workshop at Rue Boucherat, and a showroom at Rue Taitbout, which allowed him to exhibit and sell furniture, Sèvres porcelain and decorative objects which he produced in his own workshops. He was much patronised by Napoleon, and became ‘Ciseleur de l’Empereur’ (Engraver to the Emperor) in 1809.

Thomire retired in 1823, at the age of seventy-two but continued to work as a sculptor, exhibiting regularly at the Salon until 1834.