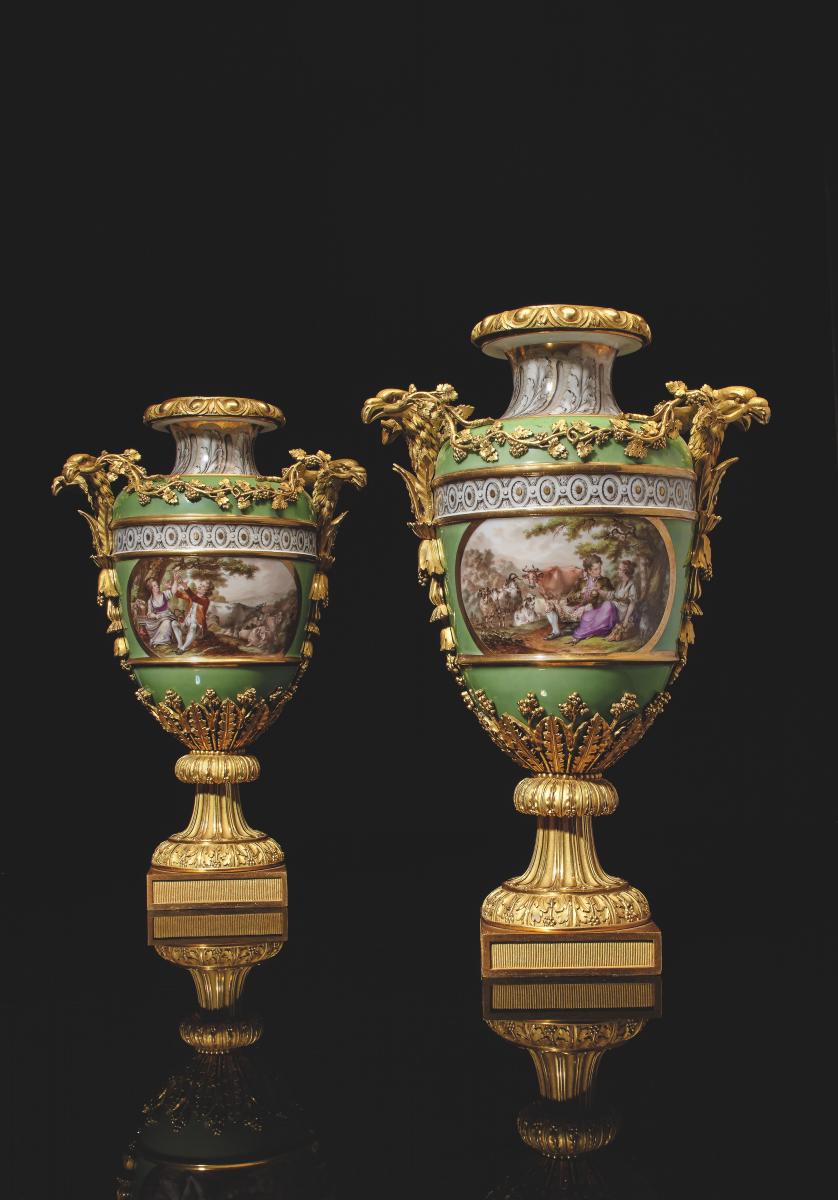 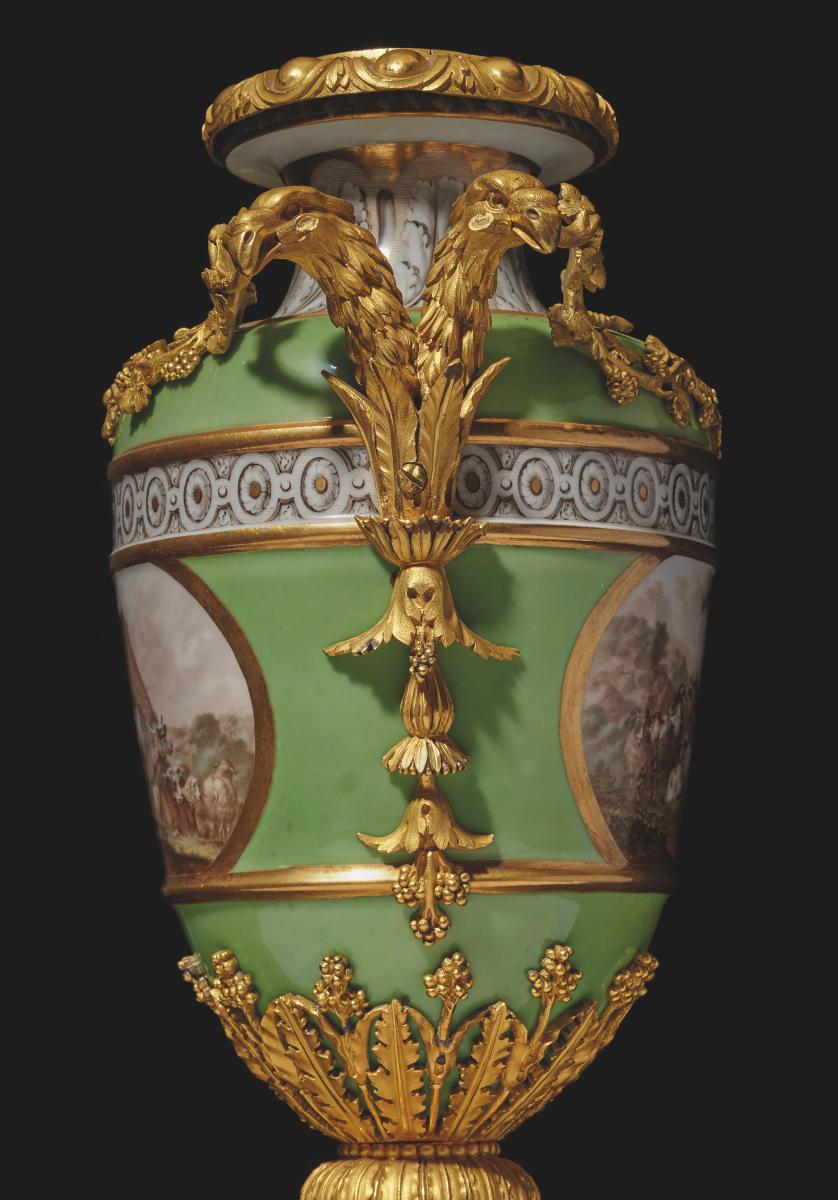 Each shield-shaped vase painted with grisaille leaves alternate with faux flutes, flanked by double eagle head handles issuing fruiting grape vine and terminating in variant pendant leaves, finely painted front and back with pastoral views of amorous couples before cows, sheep and goats probably after drawings by Boucher, on a conforming fluted ormolu base moulded with stiff leaf tips and acanthus, one stamped 'E 83'

The Élysée Palace was built for the Comte d’Evreux in 1722. Upon his death in 1753 it was bought by Louis XV for his mistress, the Marquise de Pompadour. When she died in 1764, the Hôtel d’Evreux, as it was known, was bought by the fabulously wealthy banker  Nicolas Beaujon. In 1786, the year of his own death, he gave it to the King who sold it to Bathilde d’Orléans (1750-1822), known as Duchesse d’Orléans, who had married the son of the Prince de Condé, the Duc  d’Enghien. The marriage was not a good one and the couple separated permanently in 1780. Unable to live at Versailles because of her marital state, according to the conventions of the court, she lived at Chantilly. Before her marriage she was known as Madamoiselle. From 1787 she lived in Paris. It was she that renamed the former Hôtel d’Evreux,  the Élysée in that year. The Champs Élysées was, in those days a huge open space. Although Beaujon had created gardens in the English manner, the Duchesse  created an Hameau de Chantilly which she named after her  father-in-law, the Prince de Condé’s  Château de Chantilly. Like her brother, Philippe de France, the Duc d’Orléans, she was descended directly from Louis XIV’s brother, Philippe. As such she was a Princess of the blood royal, and called her Serene Highness. Her husband’s family descended from Henri III and became the Princes de Condé.

She and her brother were both committed to a constitutional monarchy. When all titles were abolished during the Revolution, he became known as Philippe Égalité while she became known as Citoyenne Vérité. Signing the death warrant of his cousin, Louis XVI, did not save him from the guillotine in November 1793. Bathilde was forced into exile in Spain.

The Élysée was then bought by Marshal Joachim Murat in 1803 and then sold to Napoléon in 1808. The ‘EN’ mark for Élysée Napoléon presumably dates from this period.  During the 2nd Republic from 1848 to 1851 the Palace was known as the Élysée National. So, it could also stand for that as well

In 1814 the exiled Duchesse d’Orléans returned and the Élysée was restored to her. In 1816 she sold it to Louis XVIII. The meaning of the mark: ELB, sometimes with a fleur de lys, may stand for Élysée Bourbon following the Restauration.

Later in the 19th. Century the École Militaire used a simple E followed by number. In the 1855 ledger of purchases E83 refers to a lampadaire. So this precludes these vases which were made circa 1785. In  any case the École Militaire was closed in 1785 and only re-opened by Napoleon some ten years later.

The E 83 mark is clearly contemporary with the vases. What is more, the pastoral scenes in the manner of Boucher are entirely consistent with the gardening tastes of the Duchesse. The simple E is very likely to be for the Élysée and predates all the other marks. It would  therefore date from 1787 to 1792. An Inventory for the Duchesse may well have been seized by Convention in 1792; they  were paranoid about Royalist spies. It may yet be found in the Archives Nationales in Paris.

After the July Revolution in 1830, Charles X was deposed and Bathilde’s nephew, Louis-Philippe, Duke d’Orléans became King of the French.

A pair of ormolu mounted marble vases with the same eagle heads as handles are illustrated in Buckingham Palace The Interiors by Ashley Hicks on page 193. They are thought to have been made Circa 1790 and were bought by Benois for George IV while on a shopping trip to Paris after Napoleon’s fall, July 1814. A Pair of Sevres vases likewise with identical eagle head handles are also in the Royal Collection and are illustrated in French Porcelain Volume II Page 485. They are thought to be commissioned and designed by Dominique Daguerre.

Founded in 1781 by Jean-Baptist Locre, Porcelaine de Paris, was one of the first manufactures to use the Chinese secret of hard paste porcelain. It immediately aimed for the luxury trade, selling to the Royal Courts of Europe.

The attribution to Feloix is based on the very similar eagles that he has used on the set of four three branch Louis XVI wall lights Circa 1787 sold by Christies in New York from the Alexander Collection 30th April 1999 Lots 168 & 169 which fetched $511,000. Feloix delivered two pairs of wall lights which are recorded in the 1787 ledgers of the Garde-Meuble. One pair was delivered for Madame Adelaide bedroom at Versailles and the other pair was delivered to the Garde-Meuble for Marie-Antoinette bedroom at Versailles. Another pair with the same eagle heads is illustrated in the Wallace Collection Catalogue of Furniture Volume III by Peter Hughes. Several other similar pairs exist with eagle heads including a pair in Partridge Recent Acquisitions 1993 page 69. In the same Christies sale in NY another set of four Louis XVI ormolu wall lights Circa 1781 were delivered by Claude-Jean Pitoin on 25th May 1781, the casting and chasing attributed to Louis-Gabriel Feloix Lot 15 and sold for $1,817,500