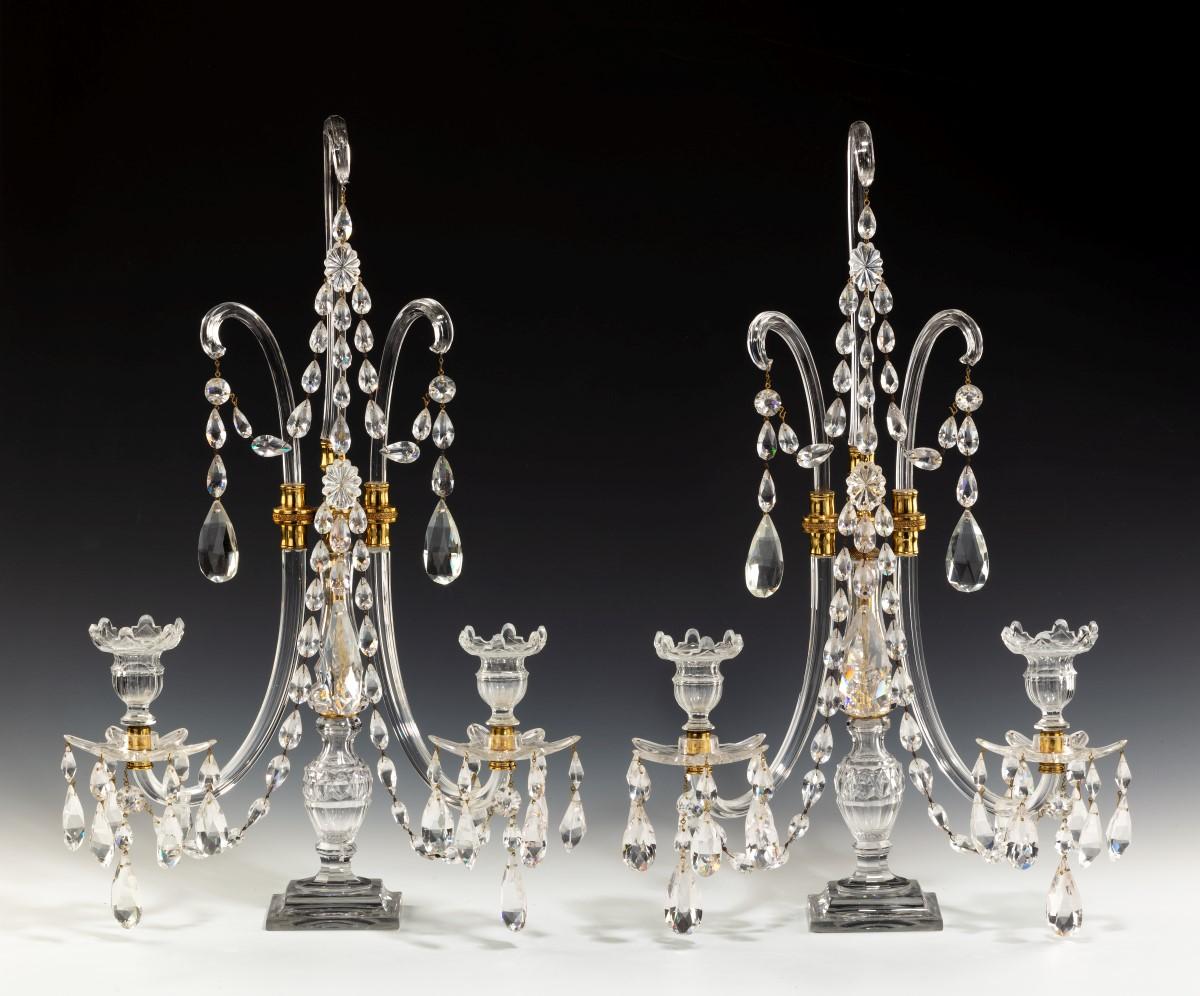 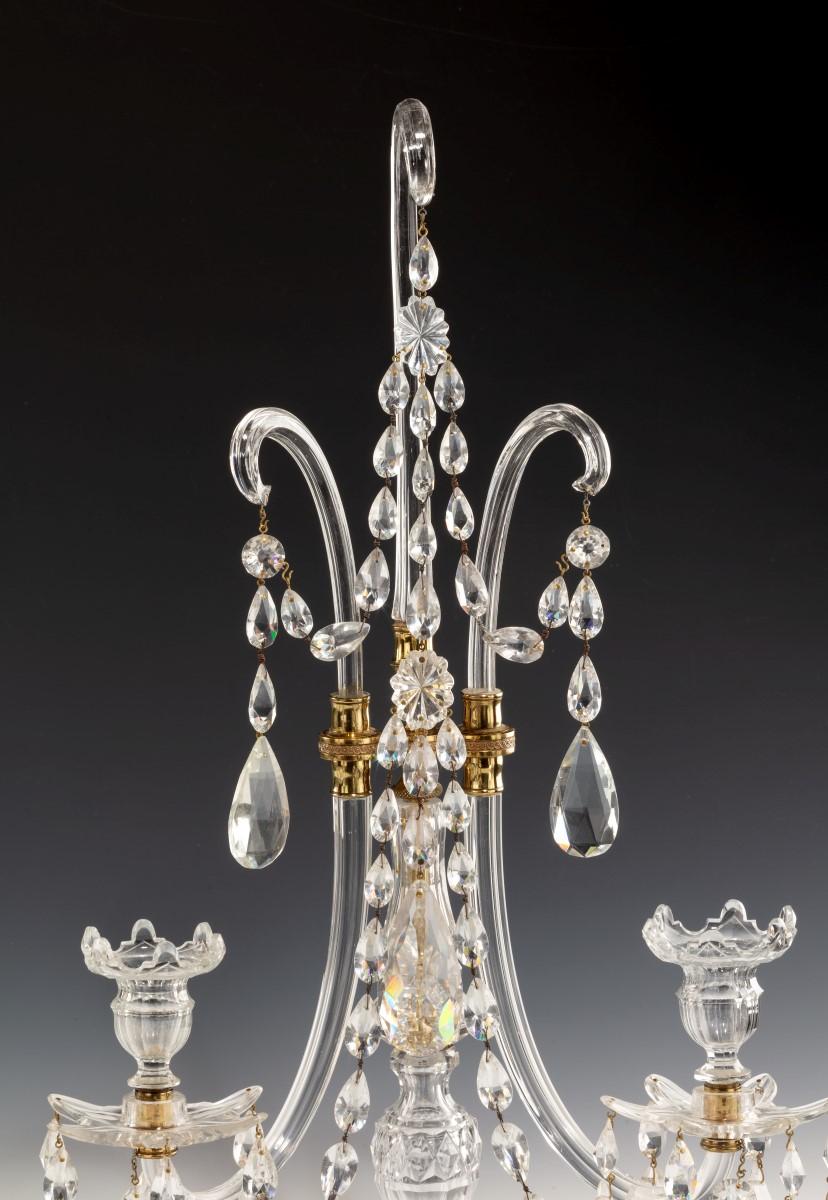 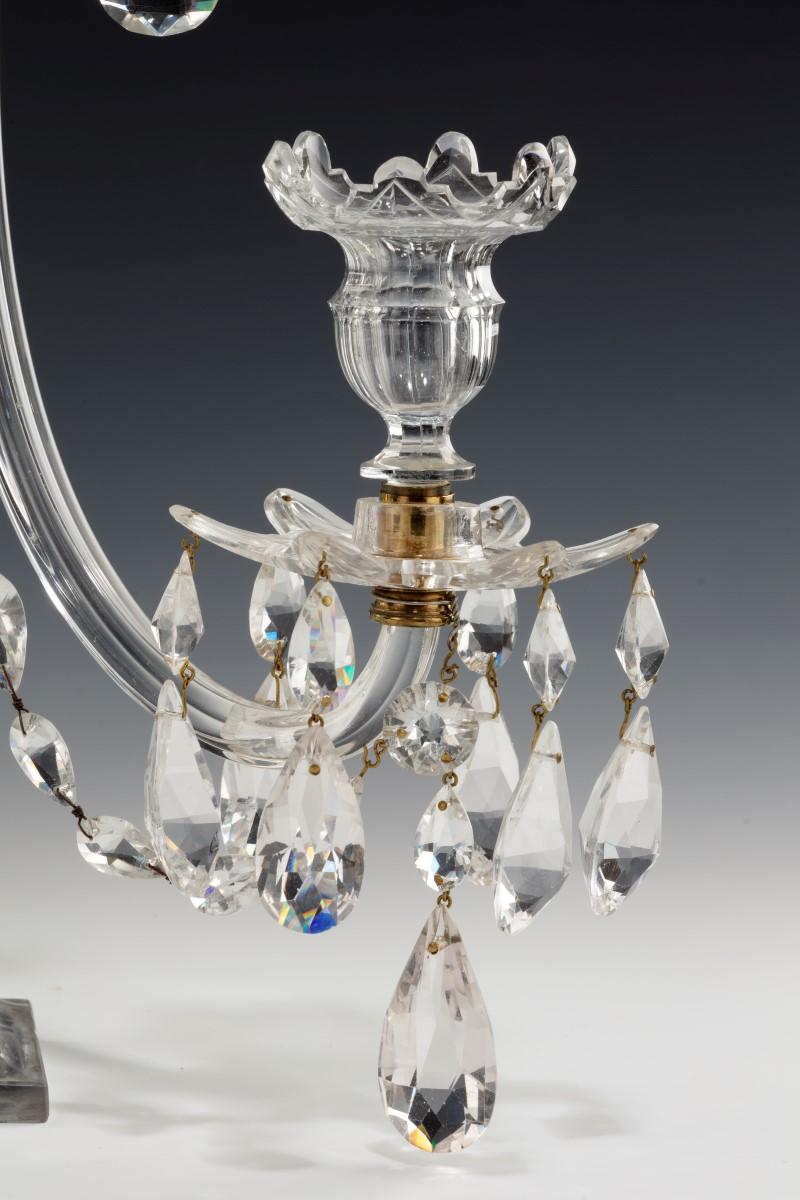 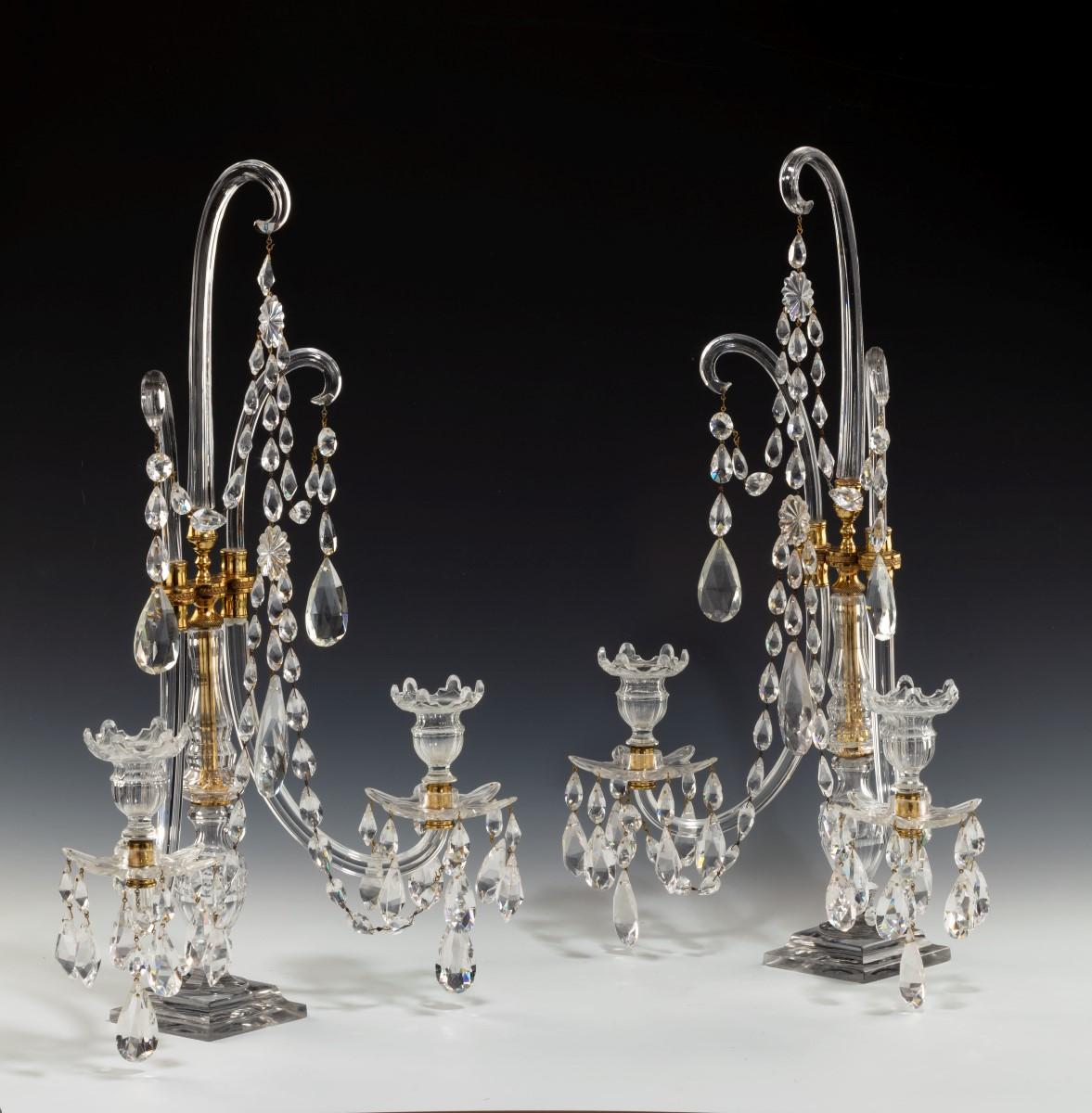 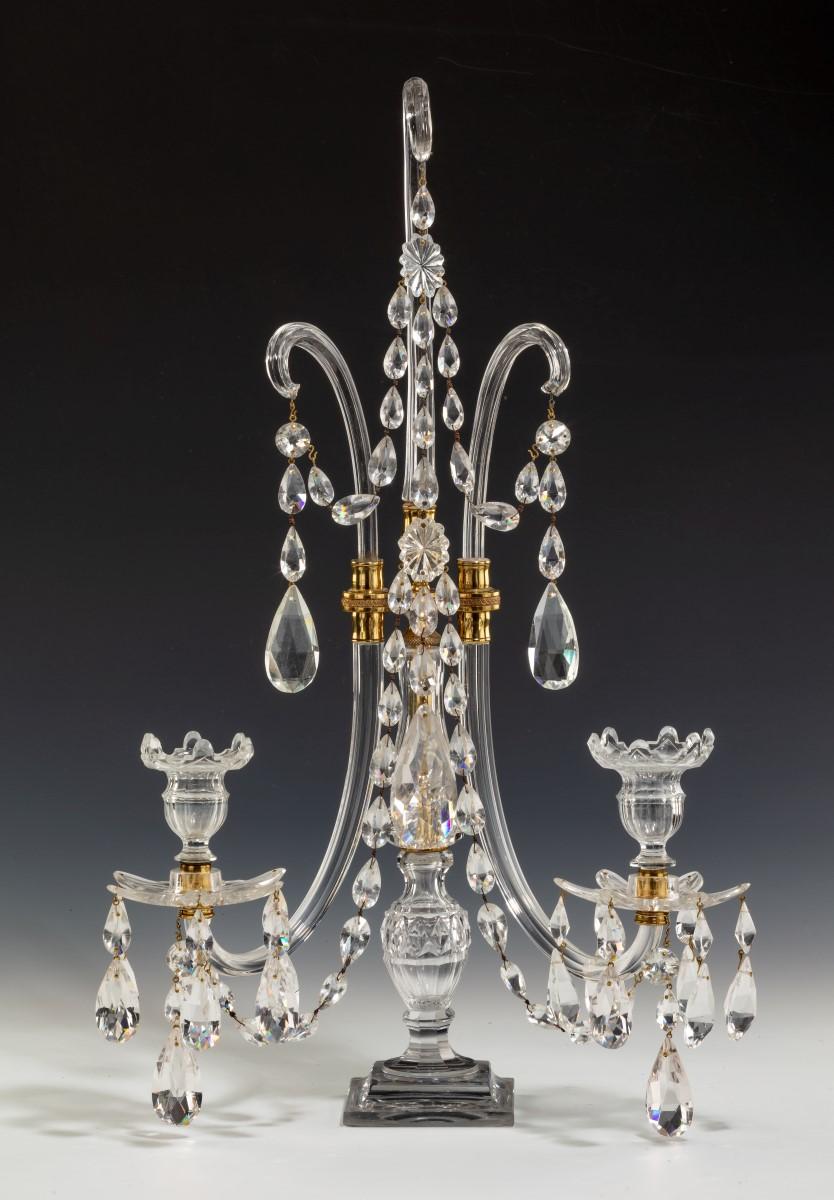 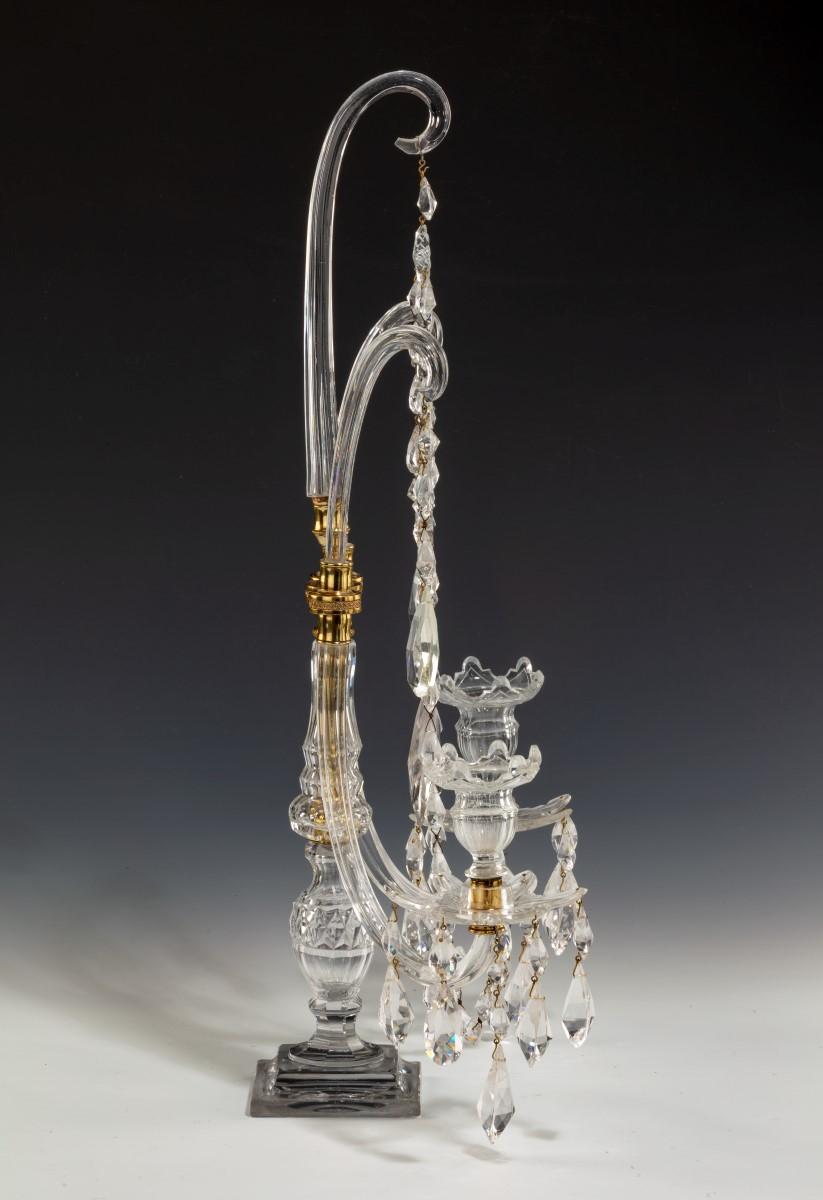 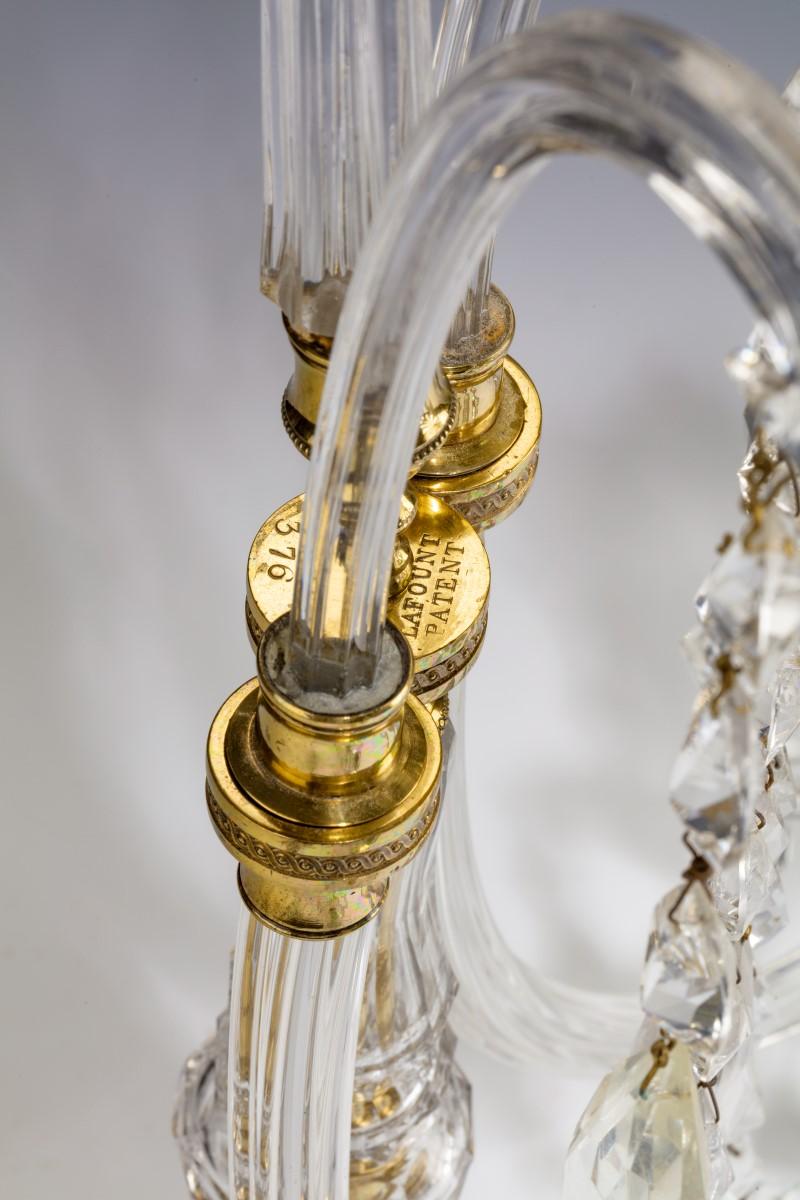 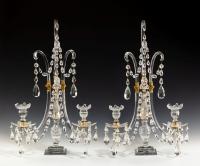 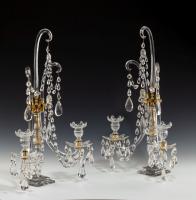 Each candelabrum supported by a cut square plinth base. With an urn-shaped lower shaft and brass mounts. The candle branches and central shepherd’s crook of ribbed section and of typical scrolling form. The branches supporting a Van Dyke-scalloped saucer rim and thistle-shaped candle nozzles, all draped with round double pointed spangles and finial drops. With garlands of pear drops, those from the arms attached to a sunburst at the top and another in the middle of the central drop.

With pear drops suspended from the six points of both the star-shaped drip pans. The arm-plates stamped ‘LAFOUNT PATENT’ – with one marked ‘376’ and stamped ‘Y’ and ‘Z’; and the other marked ‘377’ and stamped ‘X’ and ‘W’.

By the late 18th century, English glass manufacturers had begun using sophisticated cutting techniques, exploiting the refractive qualities of lead glass. In 1780, Parliament lifted a 35-year ban on the exportation of Irish glass. The Irish glass industry was tax-free, and glass manufacturers based in Ireland began to produce items for export, whilst some English glassworkers moved to Ireland to take advantage of the financial benefits. Consequently, the English and Irish styles of cut glass were very similar, often referred to as ‘Anglo-Irish’. At the time, light fittings were luxurious consumer goods. Wax candles were an expensive commodity, thus maximising the refractive qualities of glass efforts exploited the amount of illumination they could provide.

Martin Mortimer illustrates and discusses a similar candelabrum by Lafount in ‘The English Glass Chandelier’ (Antique Collectors’ Club, Woodbridge, Suffolk, 2000) plate 66, page 122 – see image below. This girandole is in the collection of the Corning Museum of Glass and is also for two lights, with extended moulded arms. The arm-plate is also stamped ‘LAFOUNT PATENT’.

Mortimer explains that instead of conforming to the established classic theme which had been fashionable for fifteen years or so, Moses Lafount, a ‘lustre-mounter’ in London, sought ‘greater originality’ (ibid, p.120). In December 1796, Lafount came to an agreement with two brothers named Cox, glass manufactures at Christchurch in Surrey, to exploit Lafount’s invention of a new design for attaching glass candle branches to chandeliers and candelabra. ‘The essence of the design was that the arms should appear to pass vertically through the arm-plate in one continuous curve of glass’ (ibid, p.121). In Lafount’s design, the branches were attached to a small brass loop, giving the impression that the entire branch was formed from one long curve of glass.

As in the adjacent example, our pair of candelabra has moulded parts, ‘the arms being…drawn while hot through a six-lobed opening to give them a softly-formed fluting along their length’ (ibid, p.121).