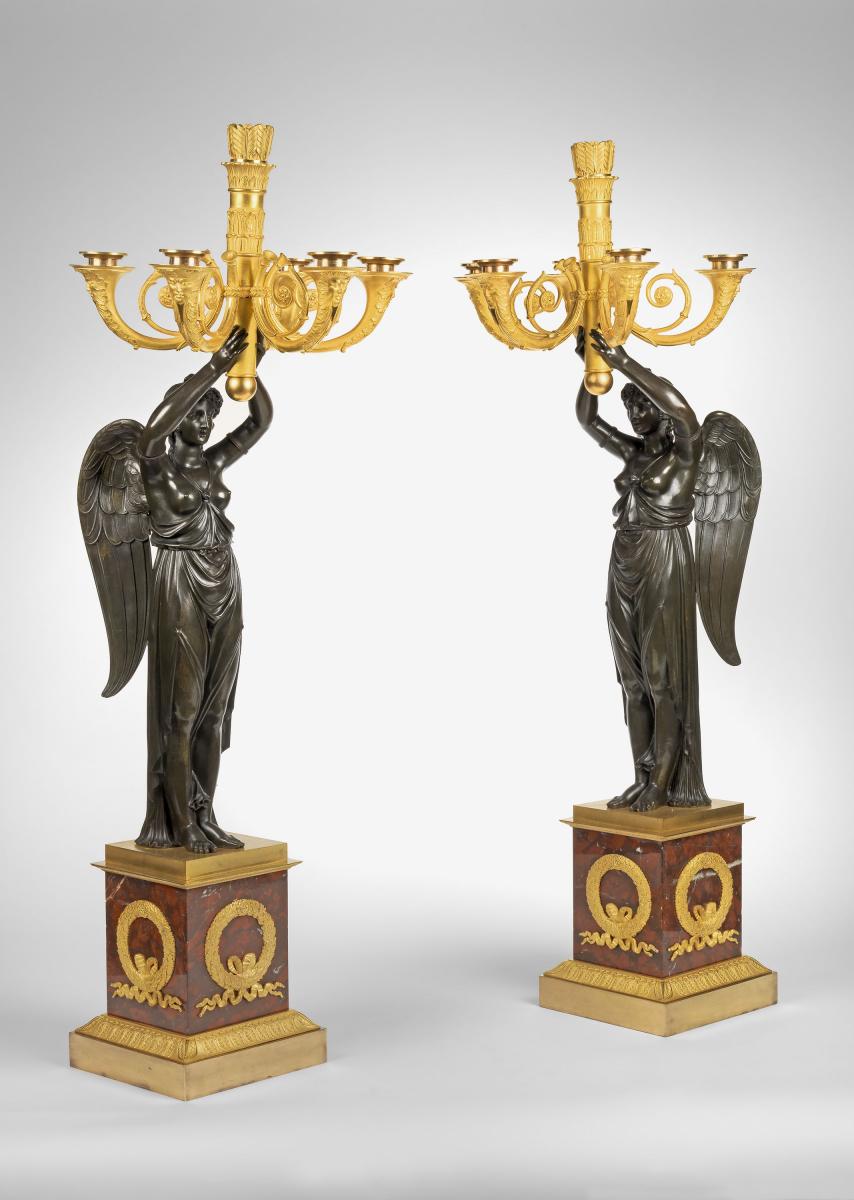 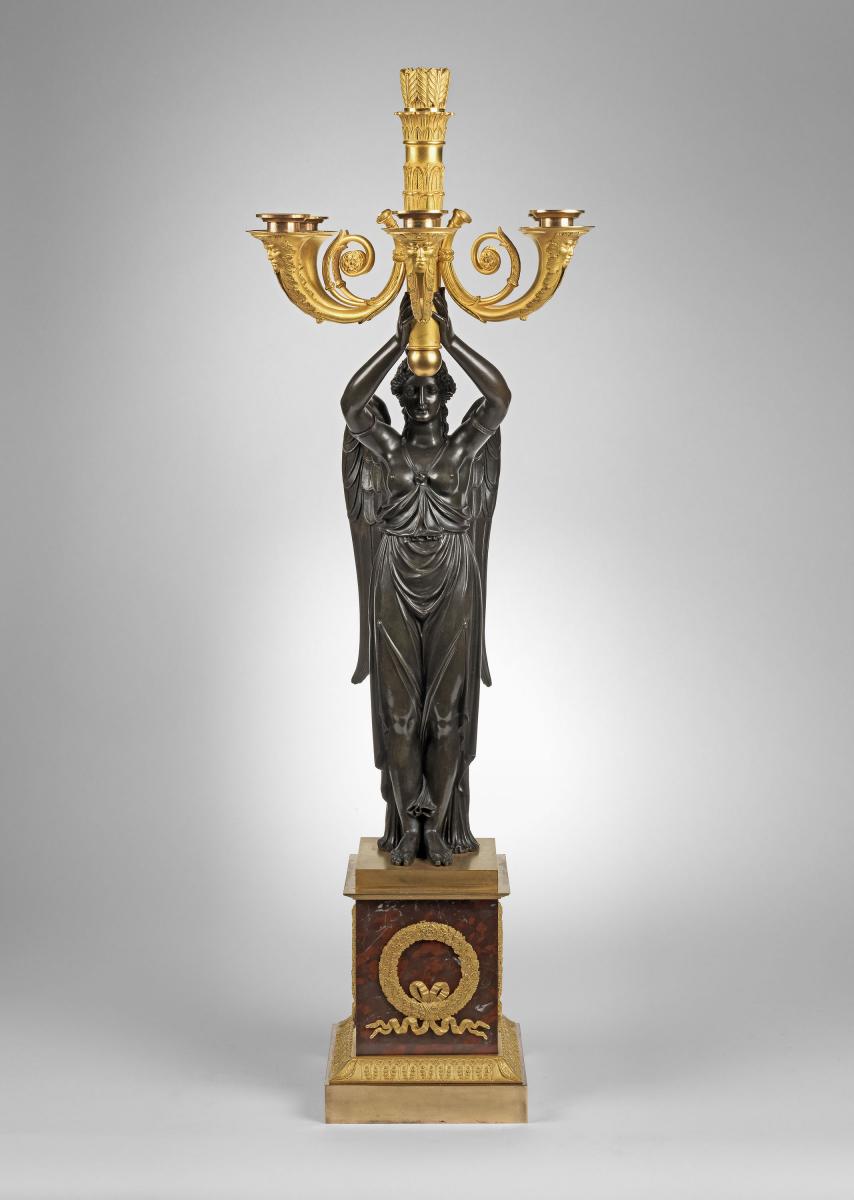 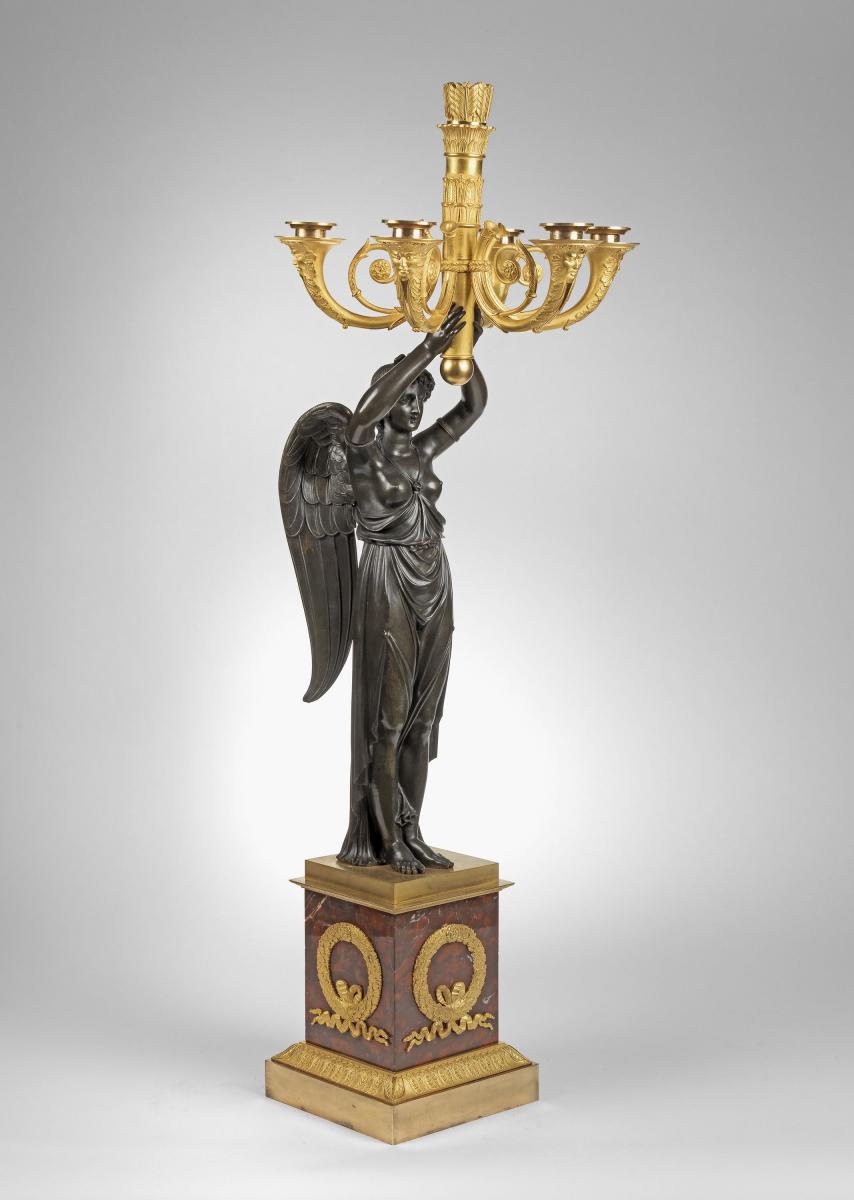 The five light candelabra are each modelled as figures of winged victory holding a quiver of arrows issuing five musical horn-shaped branches, on a square red marble base with circular ormolu wreaths with an ormolu ribbon and bow on all four sides.

Vergoldete Bronzen by Hans Ottomyer/Peter Proschel p335 fig 5.2.18 show a similar pair by Claude Galle that were delivered to The Grand Trianon at Versailles in 1809.

Les Bronzes Ornamentaux et les Objets Montes by Giacomo et Rozenn Wannenes p377 show a similar pair with the same square bases and ormolu wreaths and were made for the Russian Imperial family and are attributed to Thomire.

He was the most prominent bronzier, or producer of ornamental patinated and gilt-bronze objects and furniture mounts of the Empire period. He established the highest standard in refined finish in the craft that the French called that of the fondeur-ciseleur, "founder-finisher". In his pre-Revolutionary training, Thomire appeared first as a ciseleur, in the division of duties that went into the production, for example, of a set of gilt-bronze wall-lights delivered for Marie-Antoinette's card-room, her Salon des Jeux at Compiegne. He had received his training in the workshop ofPierre Gouthiere, the outstanding Parisian ciseleur-doreur working in the Louis XVI style, before establishing his own shop in 1776. He gradually assumed the leading position of his former master. Under the Empire, Thomire purchased the fashionable premises in rue Taitbout, Paris. When he exhibited in the 1806 Exposition Publique des Produits de l'Industrie, the first time a bronzier was permitted among the exhibiters, he gained a gold medal. At the height of his business, Thomire employed six or seven hundred workers. A great number of the bronzes by Thomire in the Imperial residences had been commissioned, but further bronzes were supplied as collateral for a loan that was extended to Thomire in 1807 and which he was unable to repay, which consequently passed into the Imperial collection in 1811. 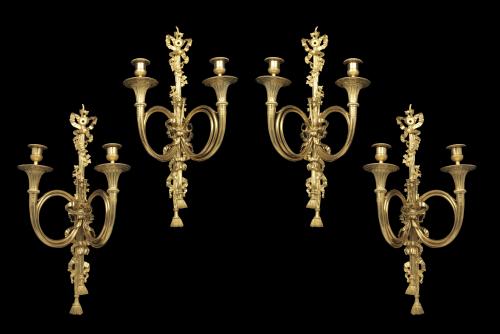 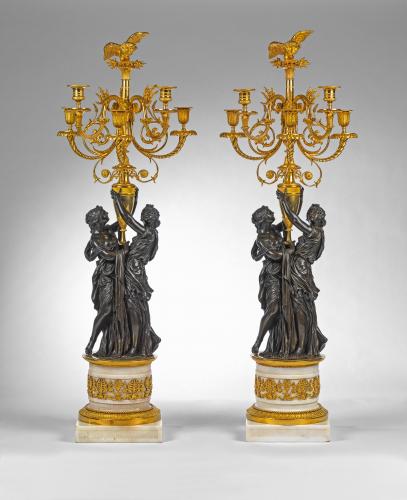 A Pair of Louis XVI Ormolu, Patinated-Bronze and White Marble Candelabra After a Model by Etienne-Maurice Falconet and Attributed to Francois Remond Circa 1790
Frank Partridge 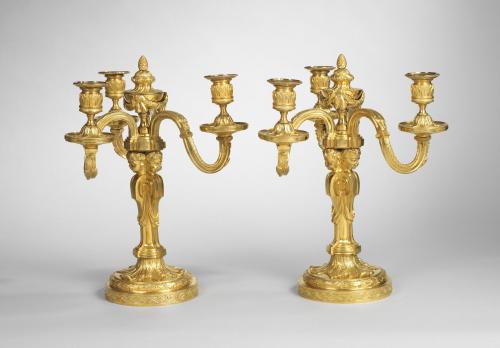 A Pair of Louis XVI Three Light Gilt Bronze Candelabra, Circa 1760
Frank Partridge
View all from this dealer