A Pair of Commodes Attributed to Mayhew & Ince 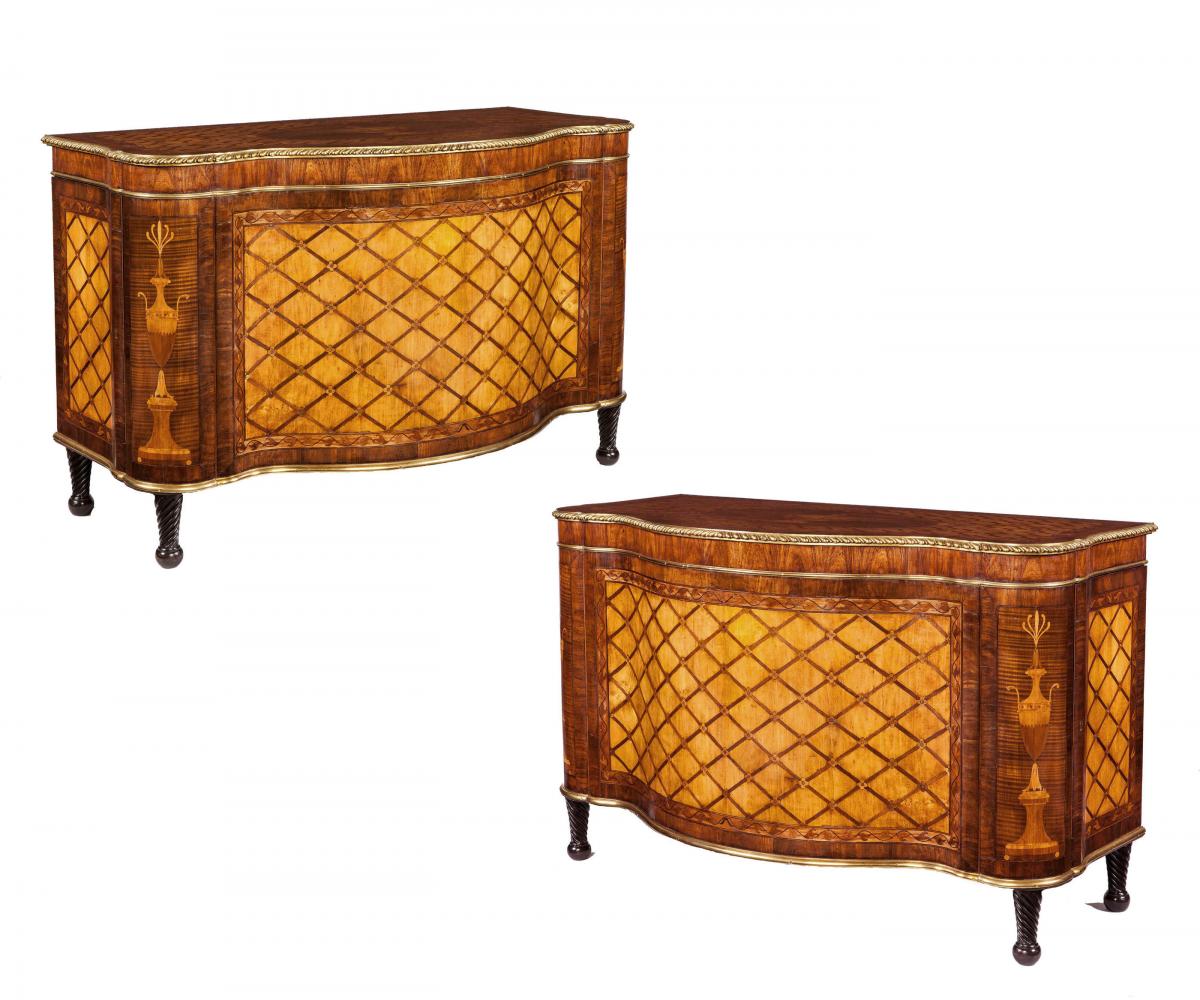 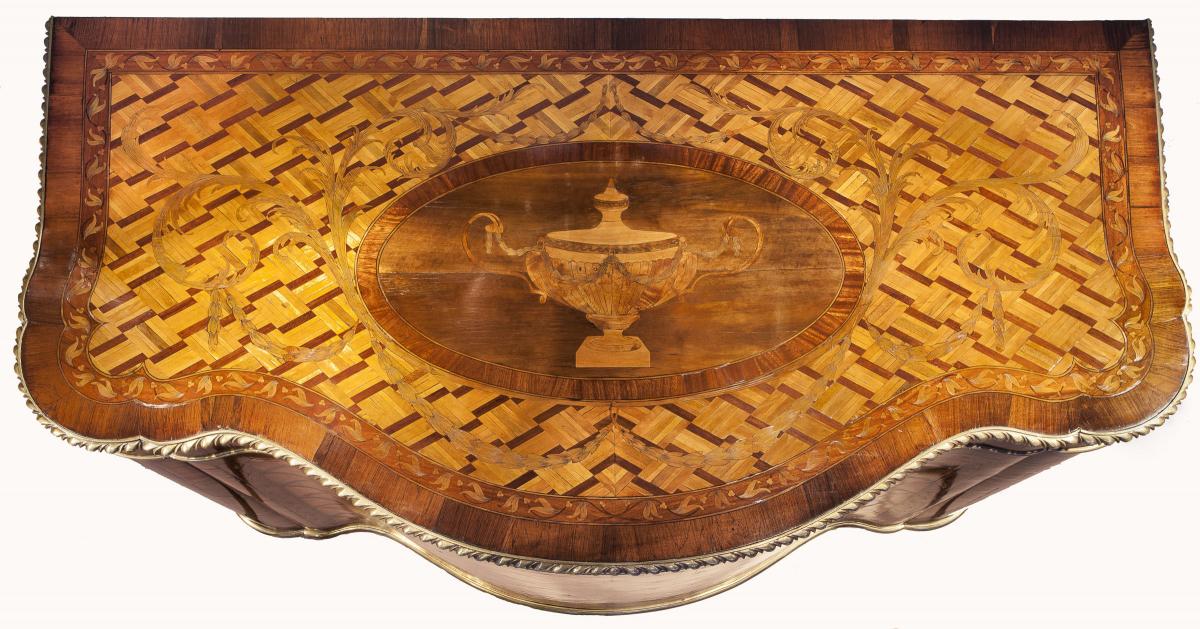 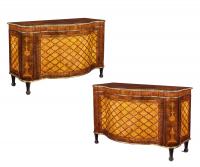 They carried out everything from the most expensive inlaid cabinet work to the plainest of tables. Rather impressively, and presumably a reflection of the quality of the work undertaken and the service provided, their clients were often very loyal.  In the case of Lord Darnley for example, patronage continued for 42 years.

Their softly curving form gives these commodes an elegance rarely found in such large pieces, and prevents them from over- imposing. The unusual design, with lobed corners punctuating the trellis panels to the front and sides, is matched by the choice of some exceptional woods for the marquetry, including a remarkable  ‘marbled’  wood in the gadroons of the central urn.

This combination prompts us to speculate about the original context for which the commodes were commissioned. The predominant trellis motif suggests that they may have been for a garden room, and the uncommon woods could perhaps indicate a botanical enthusiast as the patron.

Above all, it is very important to point out the rarity of finding a pair of commodes of this scale by one of the most important cabinet making firms in London.

Attribution
In this fine pair of commodes the viewer’s eye is naturally drawn to the tops – a reminder of the close relationship, in architectural usage, between commodes and pier tables. The central festooned urn within an oval medallion is surrounded by a rich trellis parquetry overlaid by luxuriant foliate scrolls and laurel swags; and the whole is bordered by vivacious trails of berried leaves, skilfully adjusted to turn around the lobed corners, which echo the ormolu-mounted outer profile.

The façade below, by contrast, is highly unusual in having its principal decorative focus at the front corners. The marquetry ‘antique’ vases here punctuate otherwise uninterrupted trellis panels on the wide front and the end doors, which are bordered to match the top. The distinctive lobed and serpentine-fronted profile is accentuated by horizontal brass mouldings at the top, beneath the frieze and along the bottom edge.

The unusual design is matched by the choice of some exceptional woods for the marquetry, including a remarkable ‘marbled’ wood in the gadroons of the central urn. This combination of circumstances prompts us to speculate about the original context for which the commodes were commissioned. The predominant trellis motif suggests that they may have been for a garden room, and the unusual woods could perhaps indicate a botanical enthusiast as the patron.

While the identity of the original patron still eludes us, the makers declare themselves plainly – by the design, decoration and several technical features – as the leading partnership of John Mayhew and William Ince, established in Broad Street, Soho for forty-five years (1759–1804).

The ‘antique’ urn is a constantly recurring motif in their marquetry repertoire, on which they rang innumerable changes.  Rich scrolling foliage is also a highly characteristic idiom, as is the quasi-illusionistic fashion in which this is draped across the parquetry of the top.  The gadrooned brass mount fitted to the top was also frequently favoured by this practice.

The form, serpentine in plan but strictly horizontal at the bottom edge (with no answering serpentine apron), is paralleled in a pair of commodes at Broadlands, Hampshire – again with comparable ‘antique’ vases –  which were probably delivered by Mayhew & Ince in 1788.

Evidently they promoted this design to their clients, to judge by other examples of similar type.  The low-slung form, of a slightly ambivalent square-serpentine outline, finds other variations among commodes attributed to this firm, for instance a pair of commodes now in the Philadelphia Museum of Art,  and another commode in the Lady Lever Art Gallery, . This particular design, however, with its large lobed front corners, appears to be unmatched.

In functional terms, the most unusual feature of these commodes – and almost peculiar to Mayhew & Ince – is the placing of the doors to the ends, leaving the front panel as a solid façade. This formula was regularly adopted by the firm, in commodes of every profile – serpentine (as in the Broadlands pair), semi-elliptical (most of the closest derivations of the famous Derby House Commode) and several other variants.

They also produced commodes of this type in a strictly rectangular, chest-like form, including a celebrated pair at Burghley House (delivered in 1767) and a single example at the Lady Lever Art Gallery (probably supplied to Archibald Douglas in 1773).  The two Burghley commodes have different internal fittings: one has graduated drawers (as does the Douglas commode), while the other has sliding shelves in both compartments. A comparable difference is found in the present pair, one of which is likewise fitted with two banks of drawers, while the other has a fixed shelf in each cupboard.

Various technical details are also typical of this firm’s workshop practice. While not all unique to them, in combination they strongly endorse this attribution. Particularly distinctive is the heavy reliance on screws in the construction – taken to the point of screwing parts of the carcase together before applying the veneer on top.  In some cases the top is screwed down to the case and then veneered over, but in the present commodes the screws go the other way, at an angle, under the veneer of the frieze.

Other characteristic features include the ‘false’ inside-front board, creating a blind space behind the serpentine show-front; the partitioned interior in a pink-stained softwood, lipped at the exposed edges in mahogany; the panelled softwood backboard, flush-framed inside; and the mitred junction of the doors and the back uprights where they are hinged together.

Finally, the feet were found, during conservation, to have been secured originally with integral screw-threaded extensions. Exactly the same technique is used on the Chesterfield Commode in the Lady Lever Art Gallery, one of the closest relatives of the Derby House commode and firmly accredited to Mayhew & Ince.

These commodes have formerly been linked to the output of John Cobb, and do indeed find some parallels in his style of ornament, notably in the ‘basket-weave’ parquetry on the top. However, the much stronger indicators of Mayhew & Ince’s practice leave little room to doubt their authorship. The appearance of other furniture evincing characteristics of both workshops has lately given rise to the suggestion that Mayhew & Ince shamelessly borrowed Cobb’s clothes when it suited them.