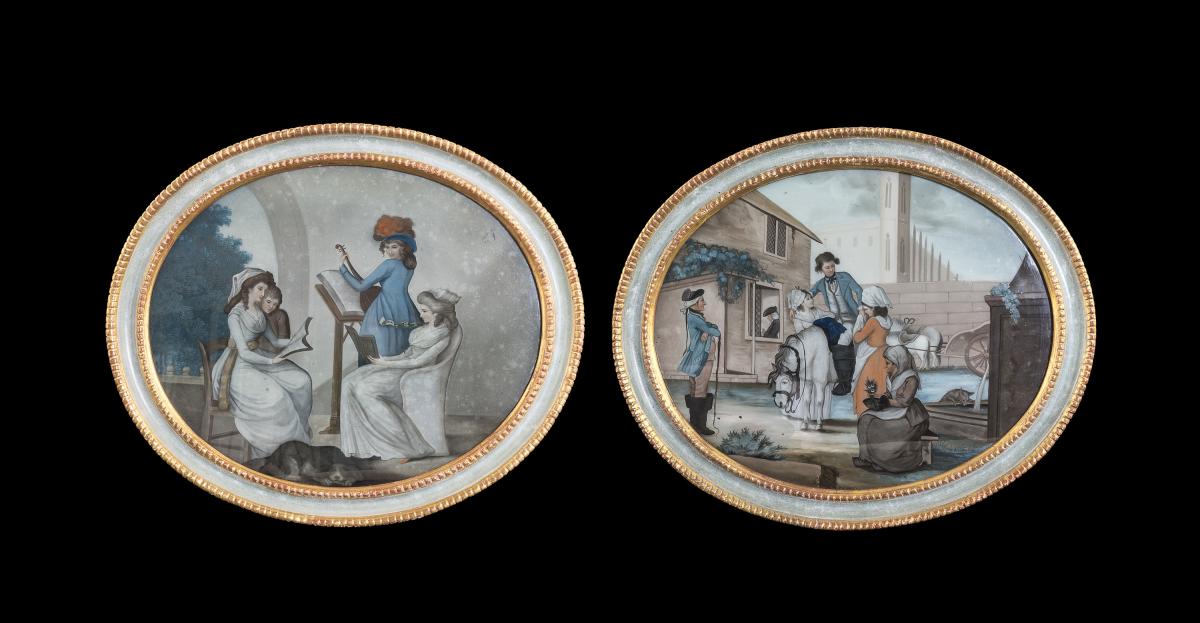 Two Chinese reverse glass paintings of English scenes, in oval format, one showing a group of musicians with a dog in the foreground, the other with a young man on a horse being tearfully bid farewell by several ladies; in modern gilt wood frames.

These are very fine examples of this type, well painted and faithfully copying two prints after paintings by Sir Henry William Bunbury, 7th baronet, (1750-1811).
One shows a group of musicians and is called The Song. It was a stipple etching by Francesco Bartolozzi (1727-1815) and published by William Dickinson, July 10th 1782. It is one of a pair dedicated to Georgiana Cavendish, Duchess of Devonshire, the other being The Dance.
The other is an illustration for Lawrence Sterne’s last novel A Sentimental Journey Through France and Italy (1768), the engraving by Thomas Watson and also published by William Dickinson, May 28th 1781. The print is inscribed in English and French: “La Fleur kissed their Hands round & round again, and thrice he wiped his Eyes, and thrice he promised He would bring them all Pardons from Rome”.
Sterne’s Sentimental Journey was a novel based on Sterne’s own travels in 1765 and framed as an answer to Tobias Smollett’s rather jaundiced Travels Through France and Italy of 1766, and Smollet appears in the later novel as the character Smelfungus.
The novel relates the travels of the Reverend Mr Yorick, starting in Calais. In Montreuil he is persuaded to hire a servant and finds a local youth La Fleur, who is noted for little other than his conquests of the women of the town. The scene here shows his tearful parting from his admirers before leaving with his master on their journey towards Italy.
This scene was published in some early editions of the book, entitled The Departure of La Fleur from Montreuil.
That both these images were published by William Dickinson suggests he might have been responsible for the order from China.