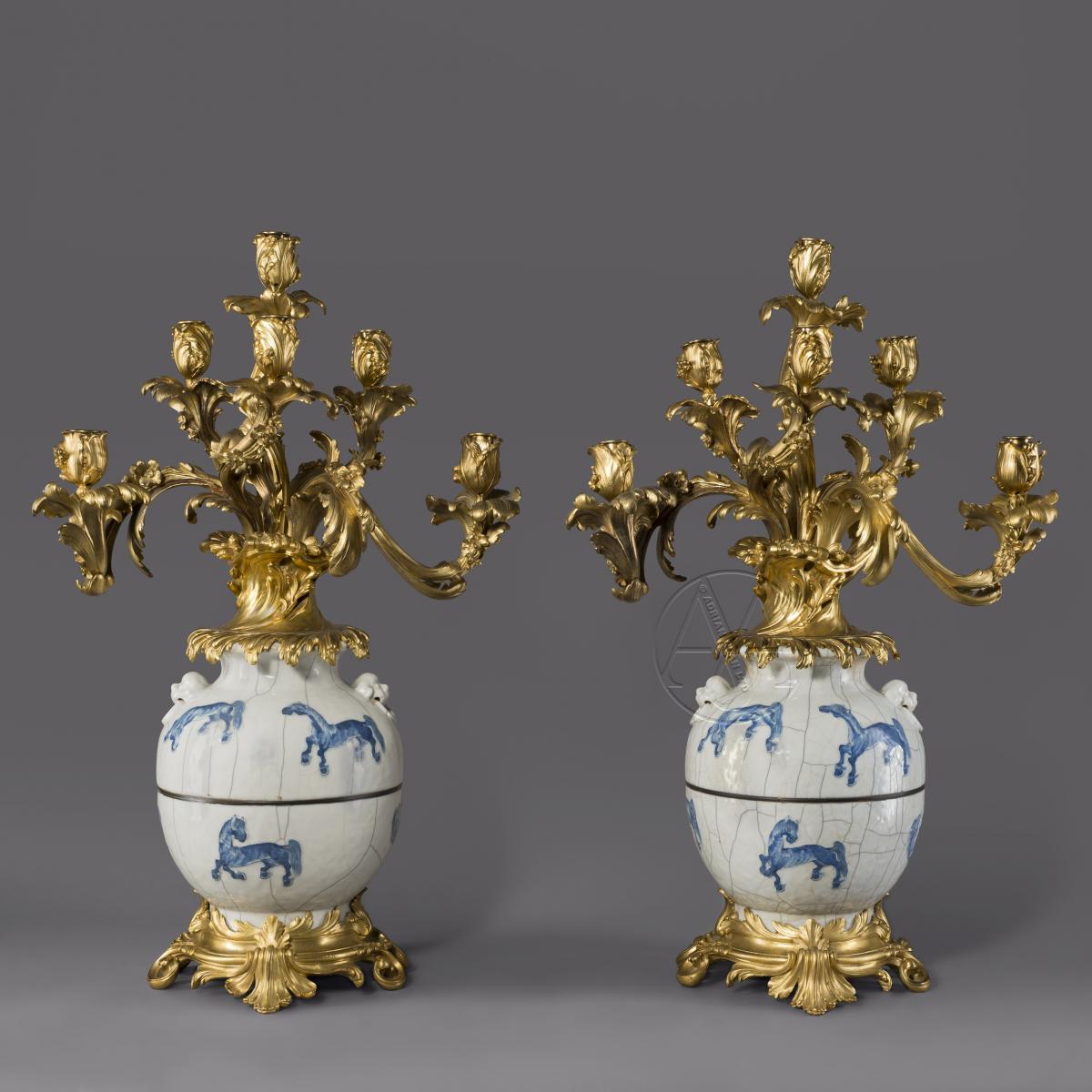 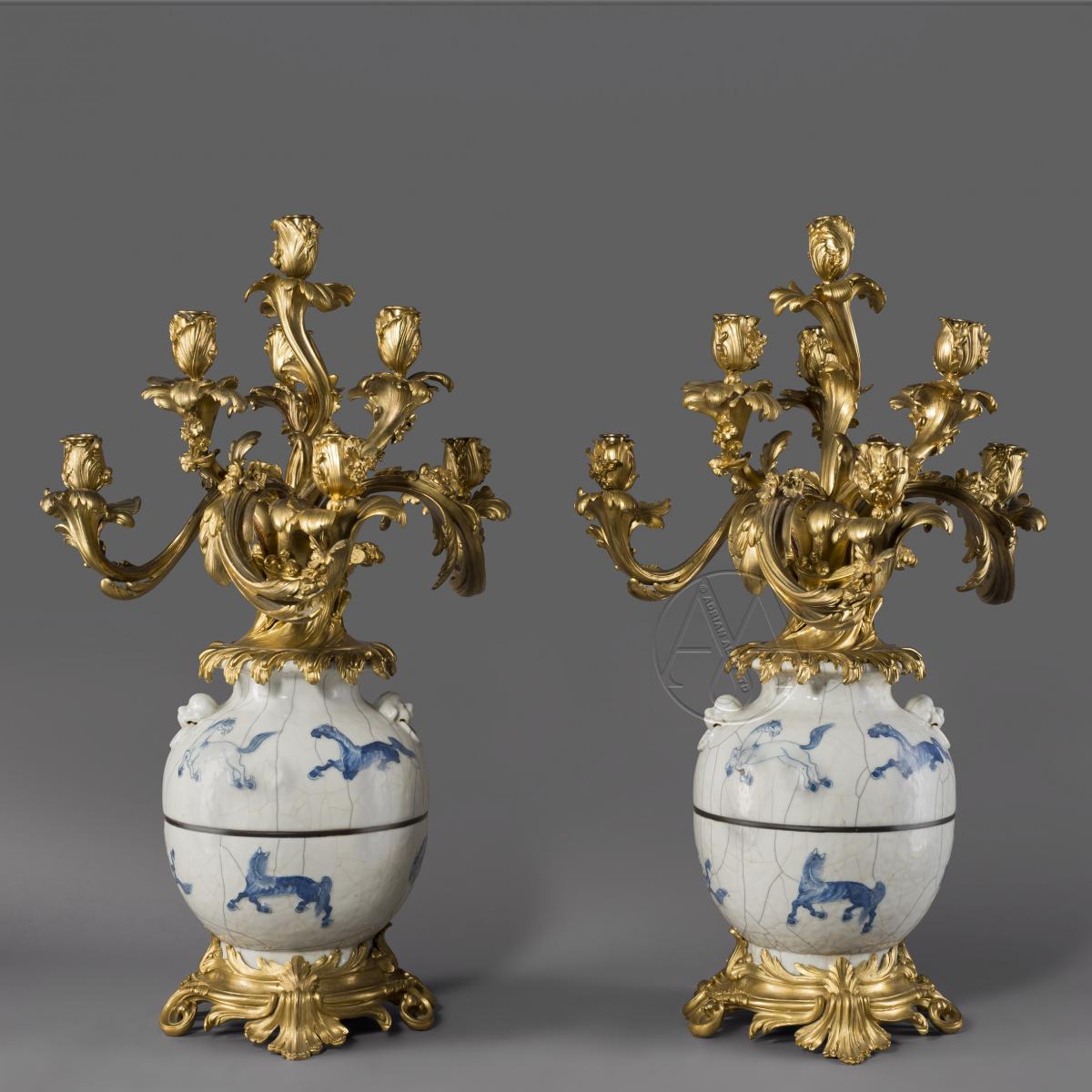 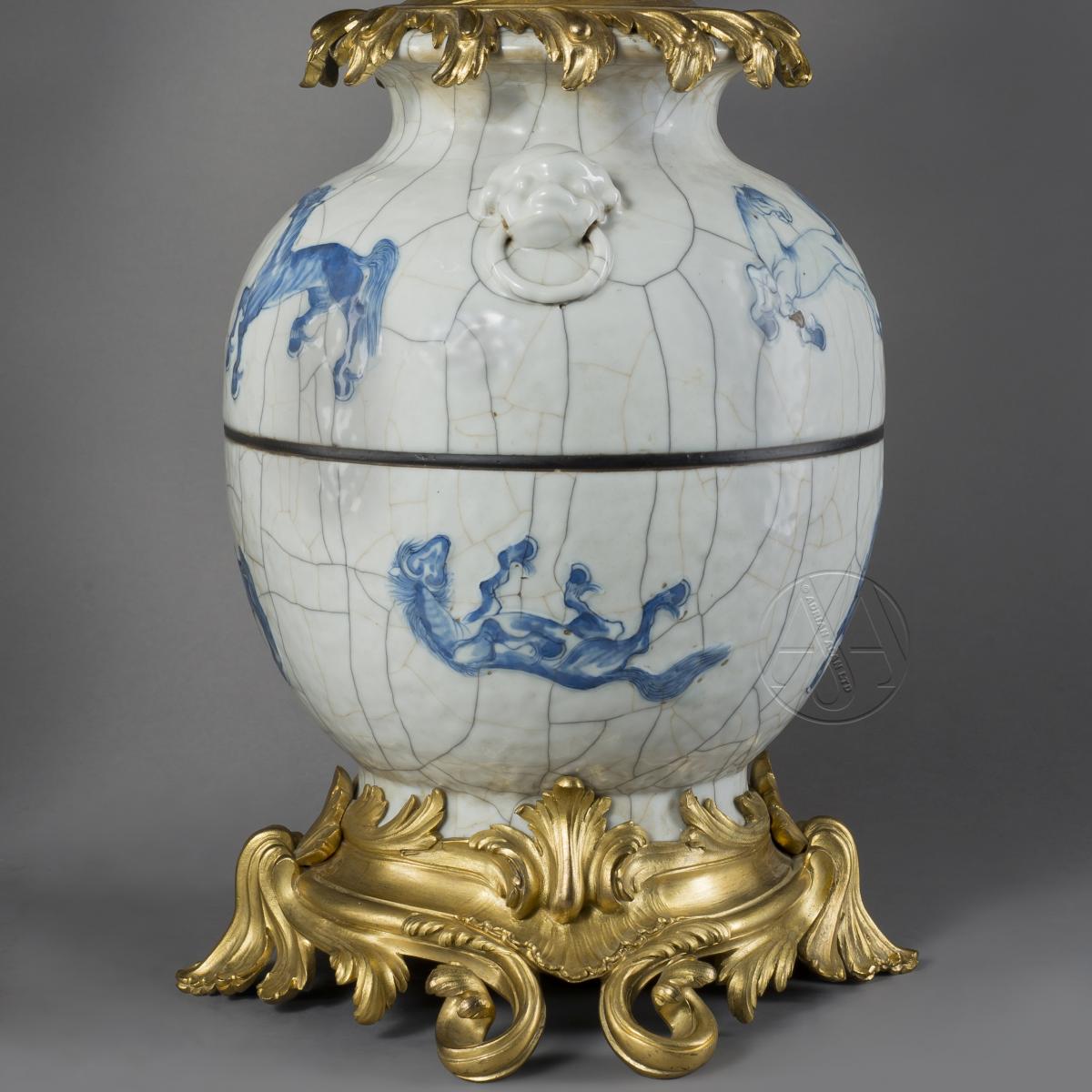 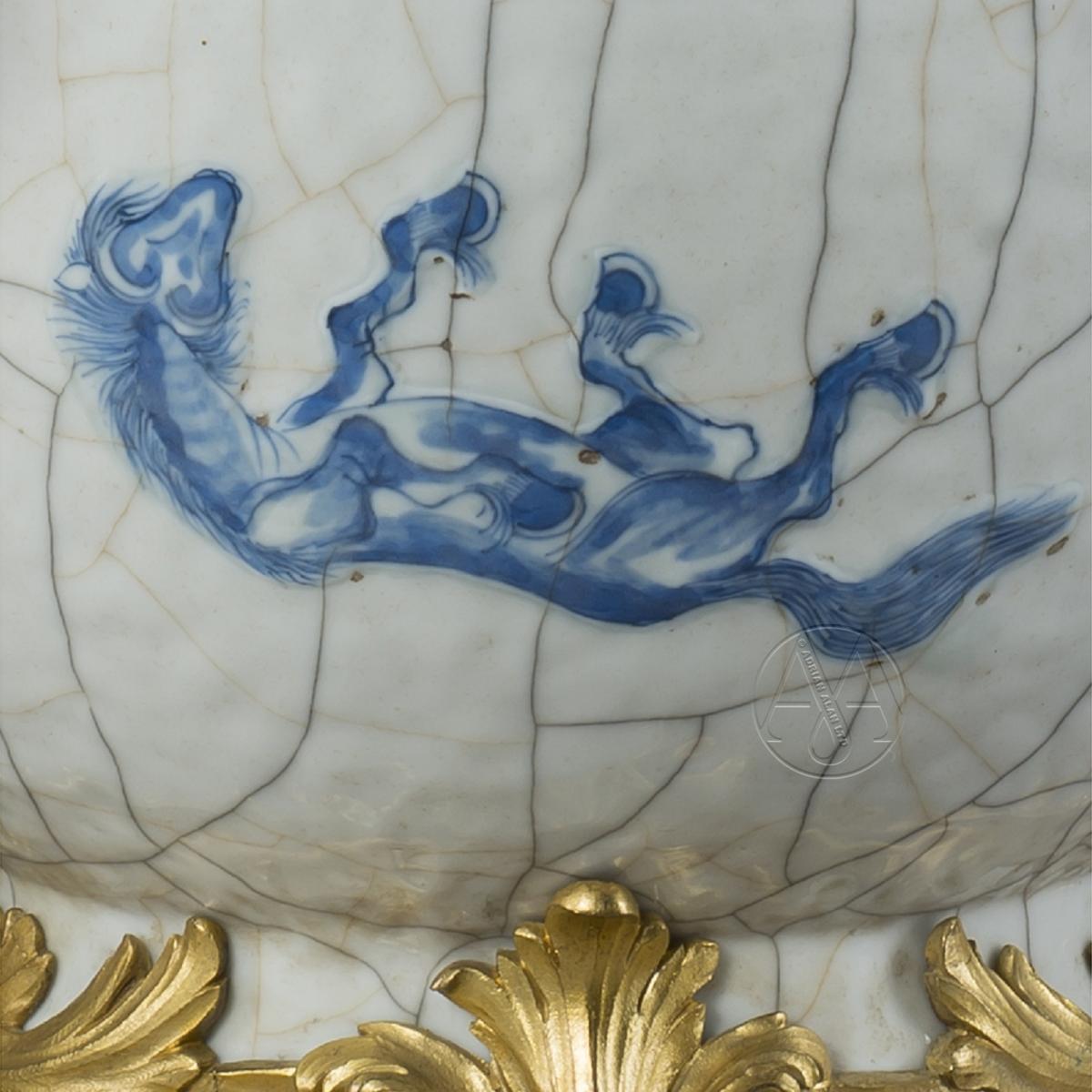 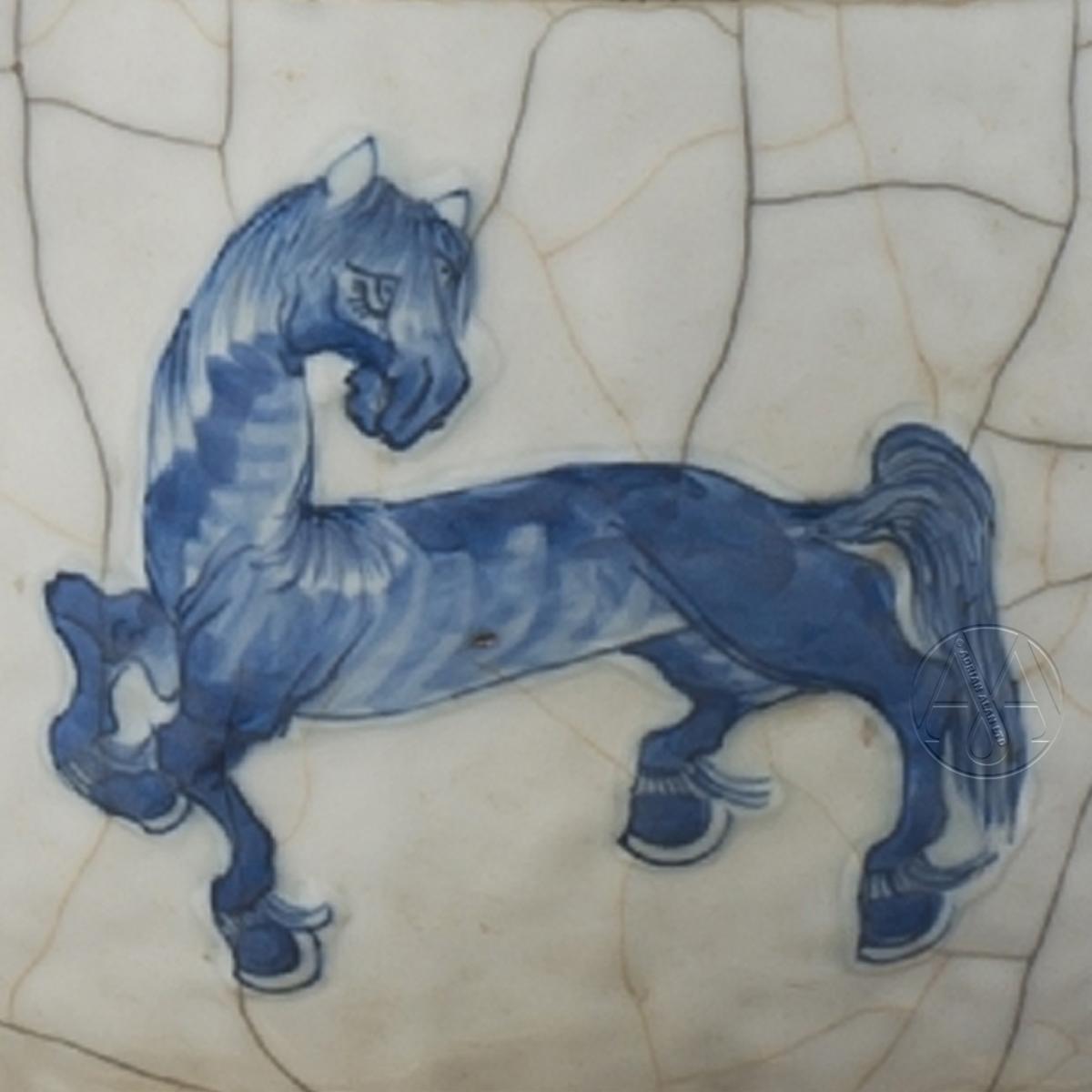 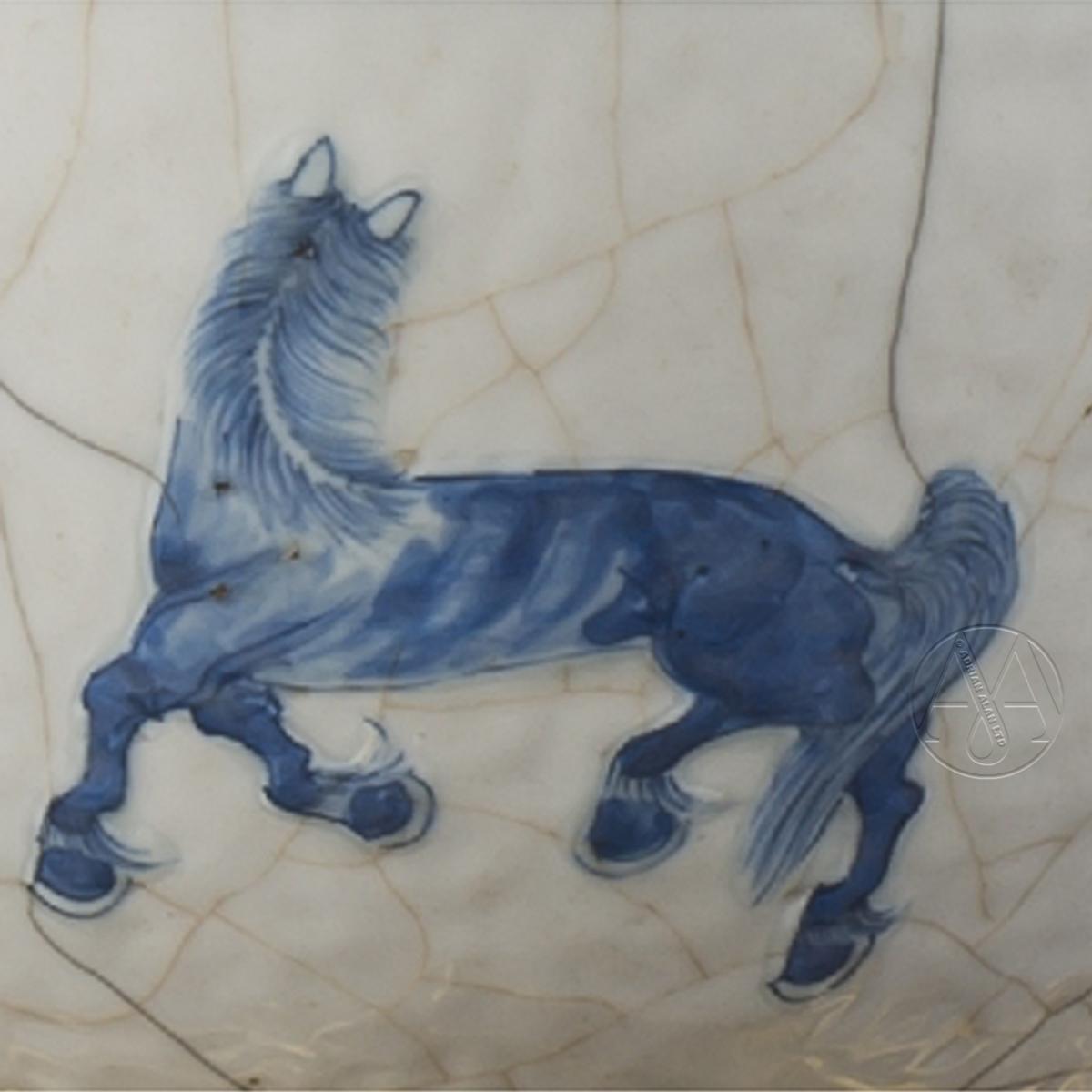 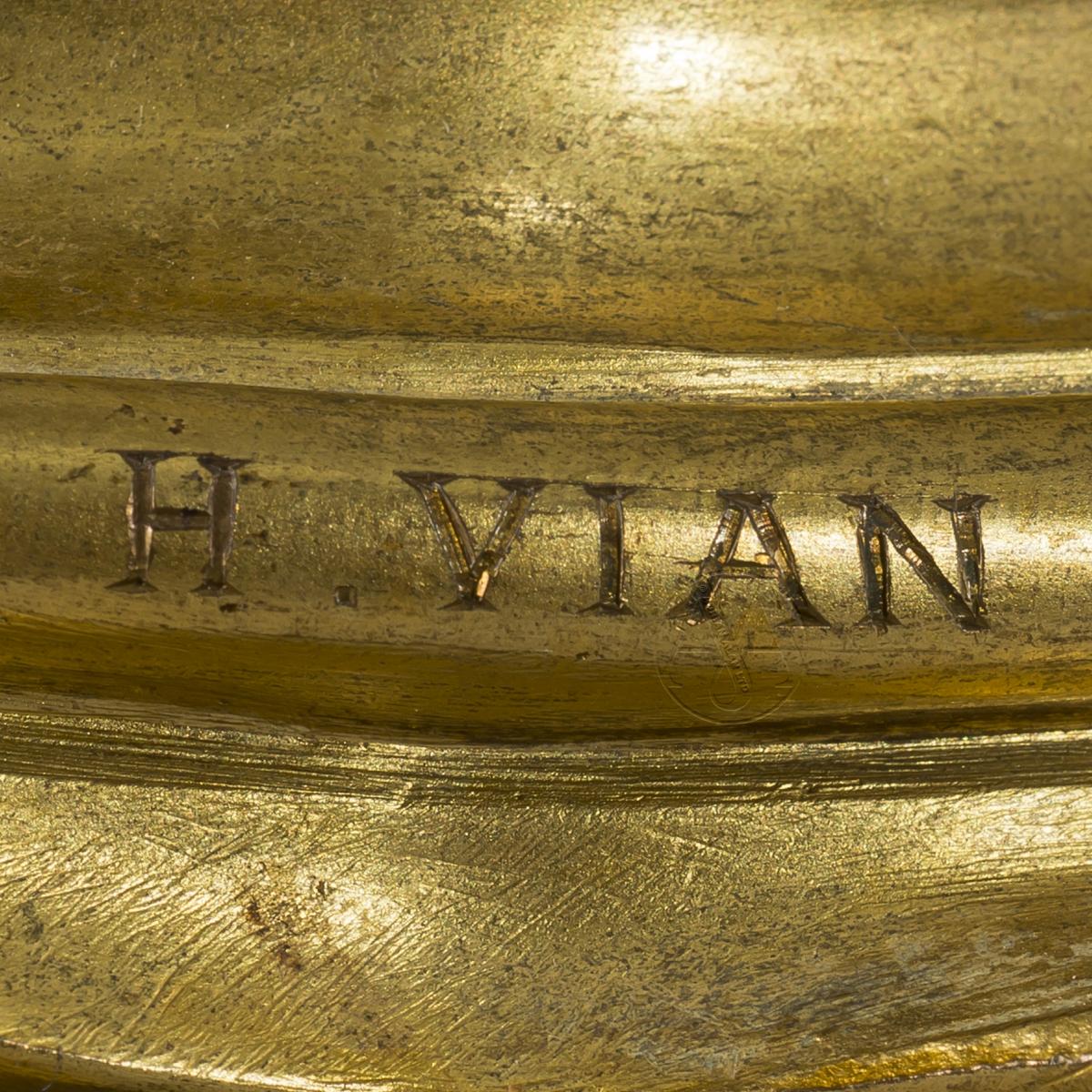 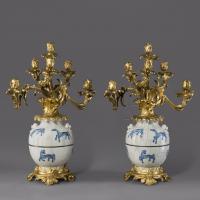 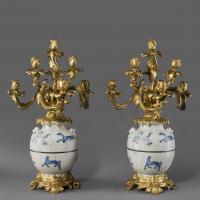 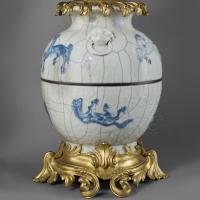 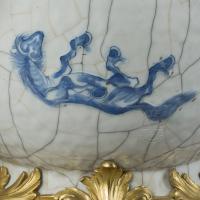 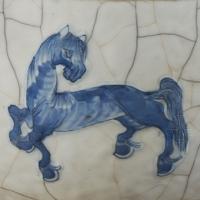 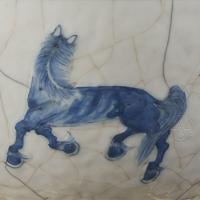 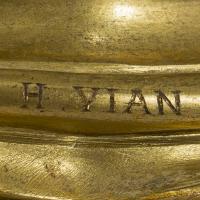 The porcelain vases, Chinese, Qing Dynasty, Circa 1890.
The bronze mounts, French, Circa 1890.

The bronze mounts stamped to one vase 'H. Vian'.

Each vase with an impressed six character apocryphal Yongzheng seal mark .  ‘Da Qing Yongzheng Nian Zhi,’ (Made in the Great Qing dynasty during the reign of the Emperor Yongzheng), [1723-1735].

Each guan-type vase has a tapering neck rising to a bulbous mouth with an incurving rim; the globular body is applied with a pair of handles in the form of dogs of fo to the shoulders and belted by a brown oxide band.  The vases are finely decorated with lively horses representing the Eight Horses of Muwang and variously depicted  grazing and galloping, all reserved on a crackle-glazed ground.  The vases are mounted with finely cast Louis XV style gilt-bronze scrolling seven-light candelabra and raised on acanthus bases.

The vases which date to the second half of the nineteenth century , have impressed seal marks to the base of each vase in Zhuan shu or archaic seal script for the Emperor Yongzheng (1723-1735).  The 'seal script' is stylistically related to the interest in the archaic and for hundreds of years Chinese artisans copied reign marks from earlier dynasties out of a respect and reverence for these earlier periods.

The eight horses of King Mu of the Zhou Dynasty was a popular theme for porcelain decorations from the Transitional into the Yongzheng period (1723-35). The story’s origins are in the historical romance, the Mu tianzhi zhuan (An Account of Emperor Mu), which describes the journeys of the fifth emperor of the Zhou dynasty (1023-983 BC) during which he met Xi Wangmu - the Queen Mother of the West - at Yaozhi (the Jade Pond).

The story tells of King (Wang) Mu, who dreamed of being an immortal God. He was determined to visit the heavenly paradise and taste the peaches of immortality. A brave charioteer named Zaofu used his chariot to carry the king to his destination.  During these travels the emperor's chariot was pulled by eight horses named after the colour of their hair.

In another account, from the fourth century book, the Shiyiji (Researches into Lost Records), the horses' names reflected their unusual talents:

The Eight Horses of Wang Mu became a popular subject among later poets and artists and a symbol for the journey of any emperor.

Henry Vian (1860-1905) was a celebrated Parisian bronzier specialising in the production of bronzes in the eighteenth century style and interior ornamentation of great quality. His output was concerned principally with the production of light-fittings but also included other bronze items.  Such was the quality of his work that his casting and gilding can often be mistaken for earlier eighteenth century works of art.