Decorated to the central roundels with precious beribboned objects, including a peach, a censer, bamboo and a guqin. These objects are surrounded by scrolling flower heads and encircled by concentric rings in underglaze blue.

The base of each plate is marked with the apocryphal Chenghua mark.

The objects which appear on this dish represent some of the ‘hundred antiques’, a collection of items combining scholarly objects with auspicious Buddhist emblems.

The motif became popular in ceramic and textile design from the beginning of the Kangxi period due to its connotations with the good qualities of the gentleman collector emphasised by the Kangxi Emperor.

The guqin, for example, is an ancient Chinese string instrument which represented music (one of the ‘four scholarly accomplishments’) and was used by learned literati figures throughout Chinese history to cultivate character, understand morality and supplicate demons.

The peach, on the other hand, is regarded to be a sacred fruit by the Daoists and is a symbol of immortality. The uniting of these emblems is highly auspicious and very popular in Kangxi ceramic design. 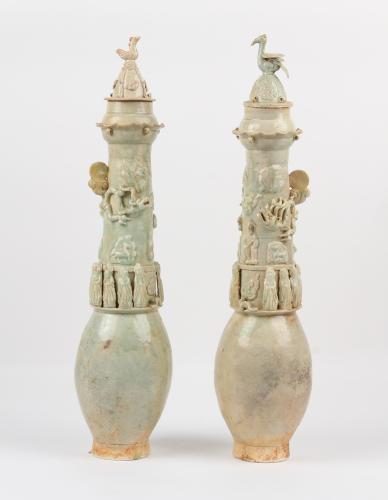