A monumental royal coat of arms by John Steell 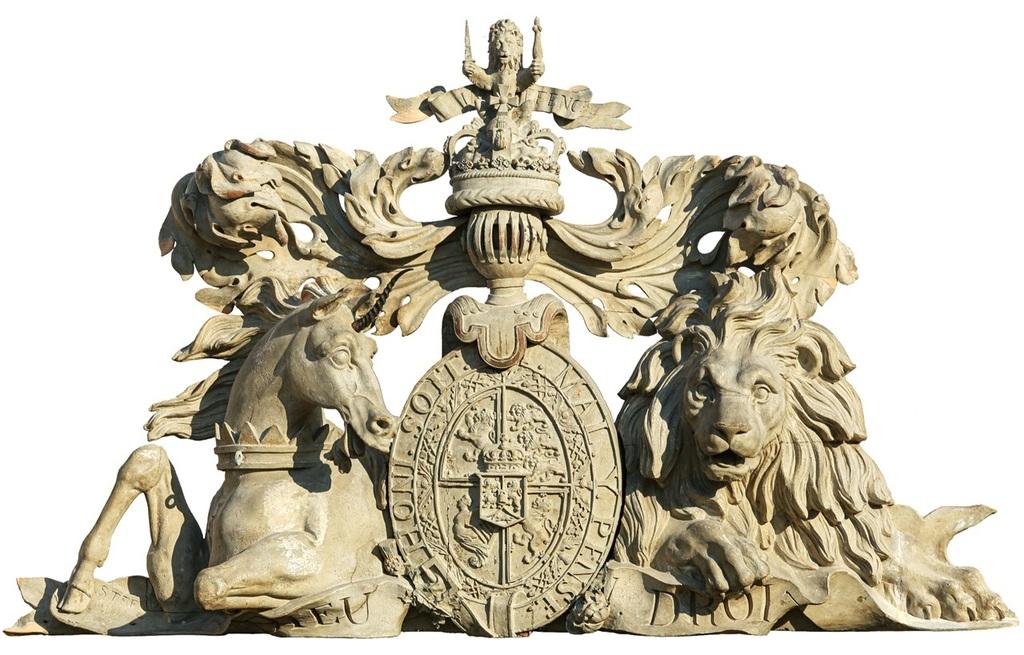 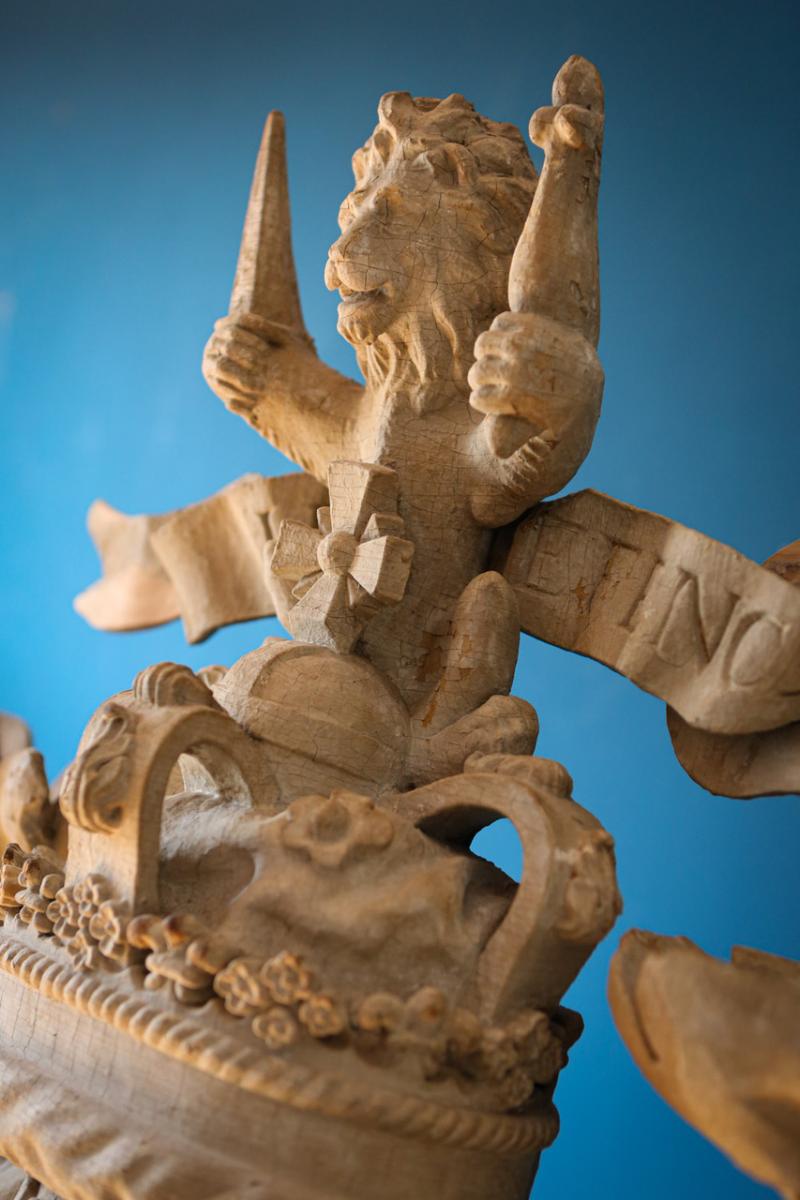 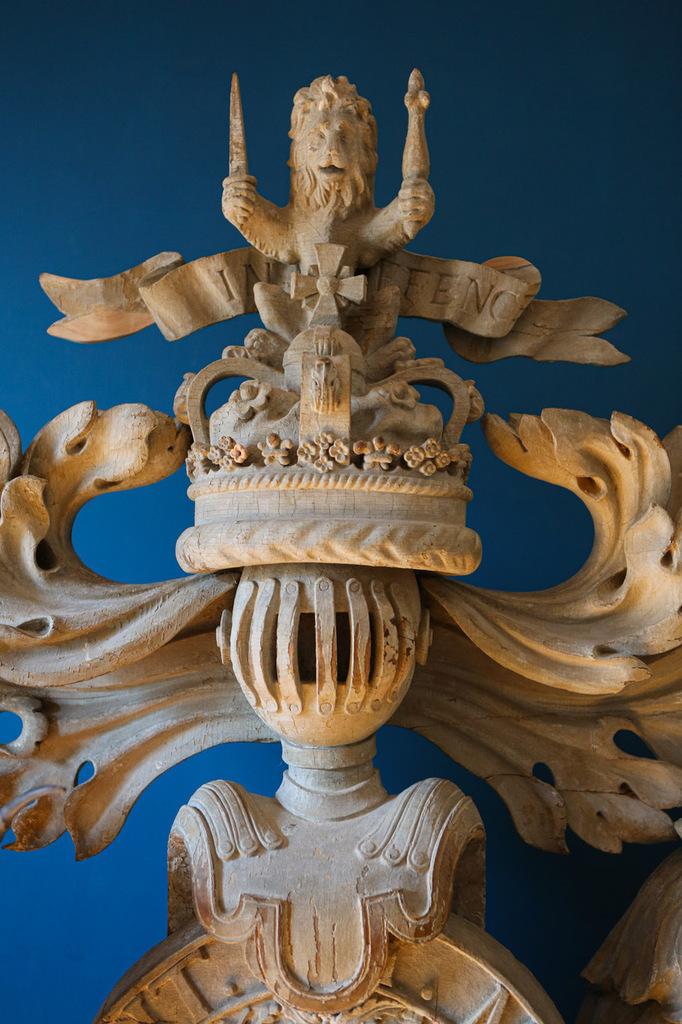 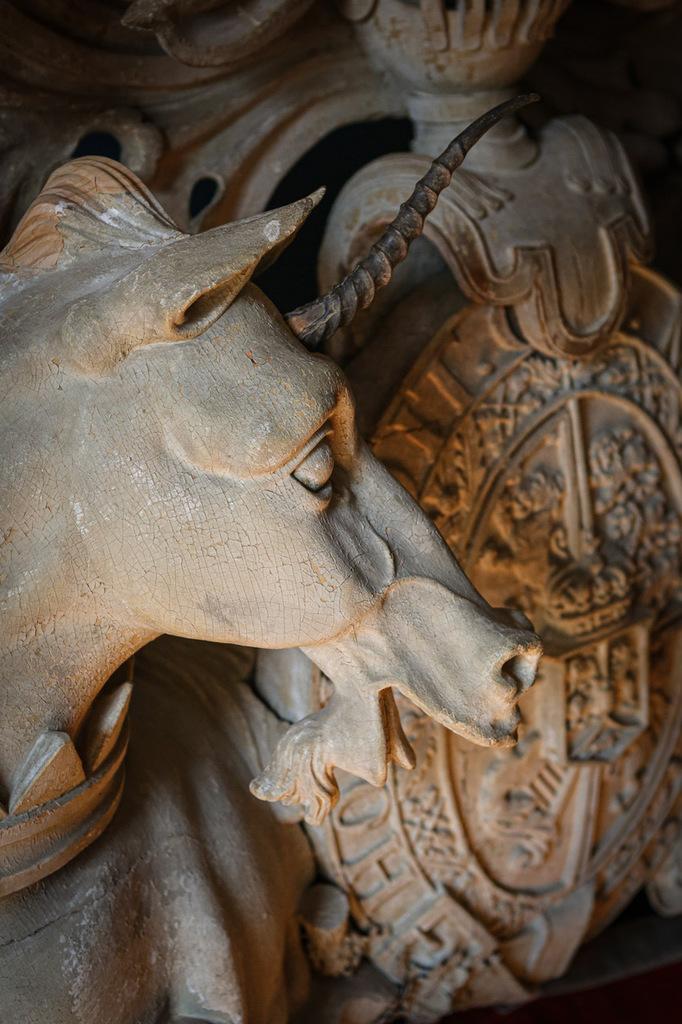 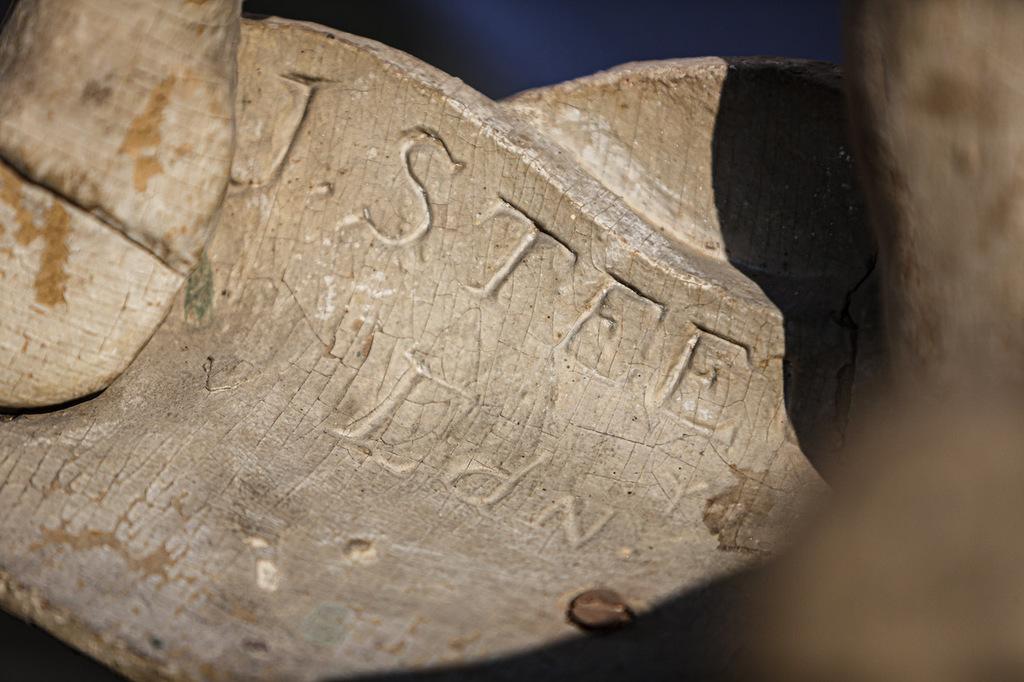 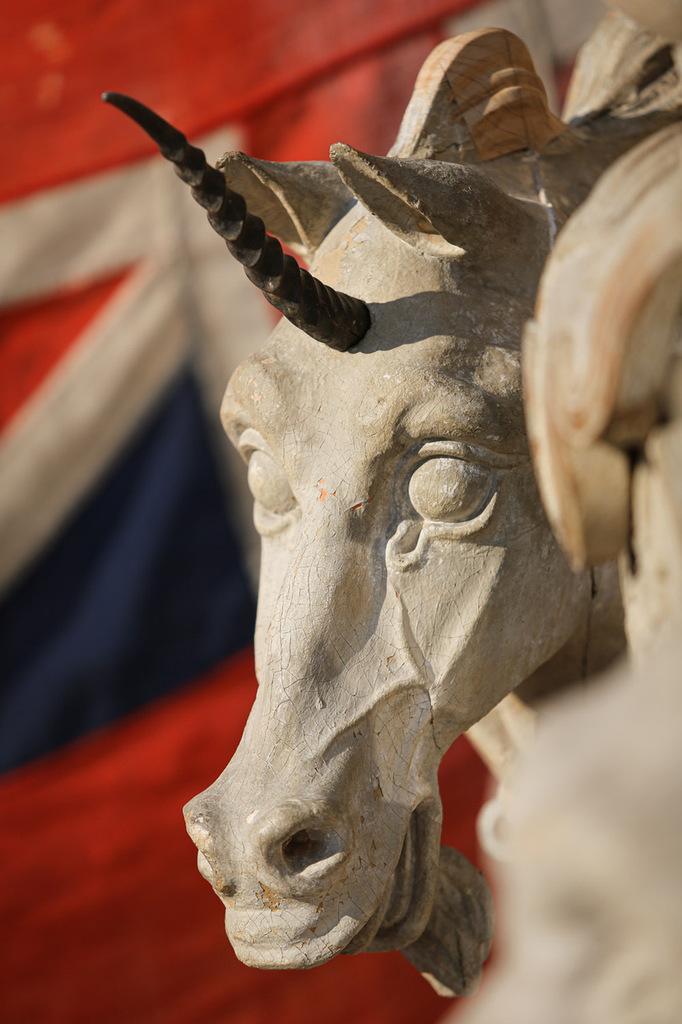 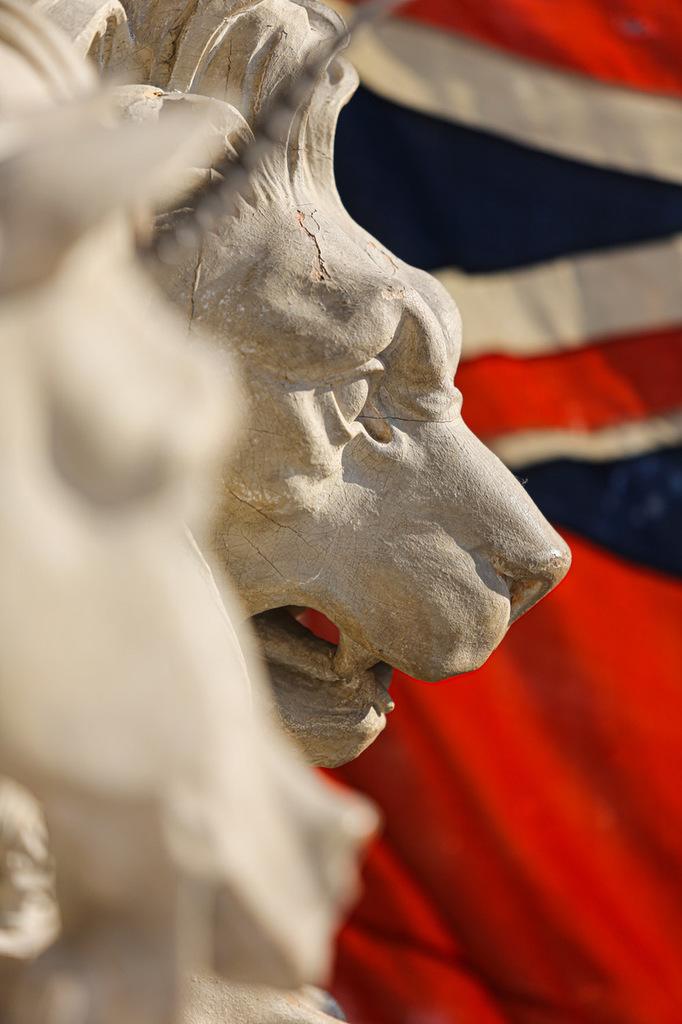 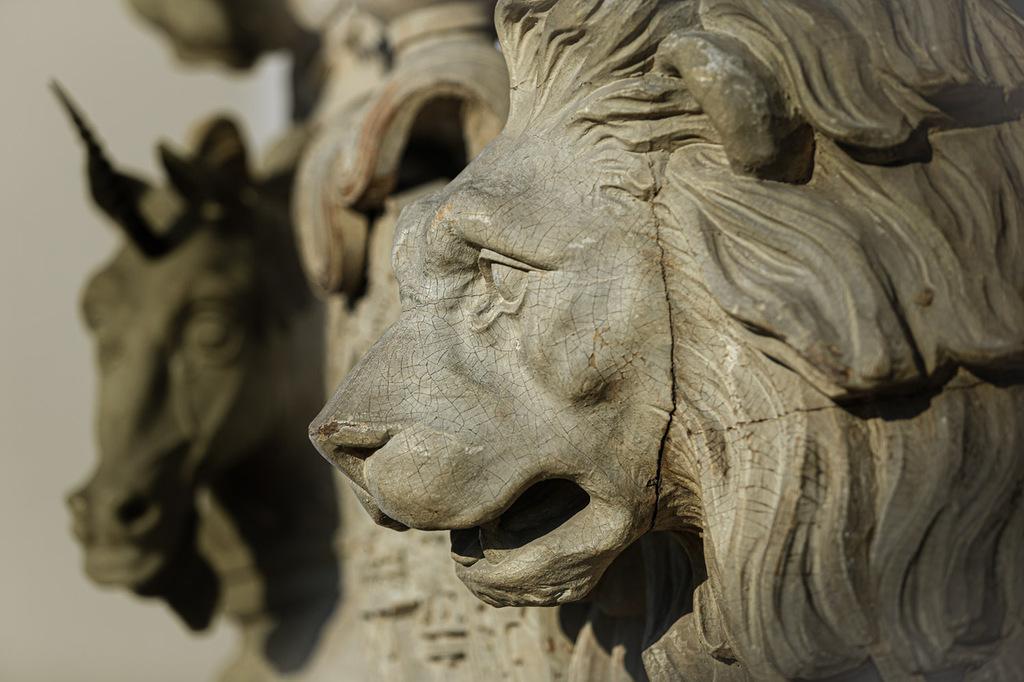 This late Georgian carved and painted wood coat of arms is of exceptional scale and quality. Depicting the royal coat of arms surmounted by an armed lion, royal crown and visor flanked by fleshy acanthus leaves and supported by the head, chest and front legs of a recumbent lion and unicorn, both reclining on a banner partially inscribed Dieu and Droit , signed on the front J Steell, Edin . Scottish, circa 1790.

This royal coat of arms is one of four now known to survive by John Steell. One is in the collection of the National Galleries of Scotland and the other two are still in place, adorning the pediment of Leith Customs House and the interior of the County Hall in Cupar. Both of these latter pieces have been later gilded and, in the case of the Leith example, later painted as well. The piece in the NGS is partially constructed from plaster, with the remaining part being of gilded pine. The academic appeal of all of these pieces is sizeable. The Steell family were certainly Scotland’s most notable carvers and sculptors during the 19th century and commissions like these for municipal buildings would have been extremely prestigious.

The discovery in context
It is extremely instructive to view these carvings together and assess them as a unified group though, unfortunately, measurements for the two carvings still in situ are not in the public domain. The piece in the National Galleries of Scotland is an altogether smaller piece, measuring 48 inches by 72 inches by 15 inches. It is also likely to be the latest in date as the first three figures forming the date are visible to the reverse and they are 184. John Steel Snr.’s trade card survives and advertises “house and ship carving on moderate terms”. It is thus tempting to conclude that this smaller carving might have been produced for a ship. All of the surviving pieces are signed.

It was during restoration in 1983 that the royal coat of arms on the pediment of Leith Customs House was discovered to have been carved by the Steell family. Intriguingly, this is also the only one of the known examples to have a date, that of 1813, carved into the reverse adjacent to the signature. Thanks to the work of Charles J Burnett we know that the piece was seemingly originally painted in a monochromatic colour scheme.

A simple visual examination of these three images reveals a surprising amount. Rather than keeping to a standard design and scaling the motifs up and down, Steell tailored each coat of arms precisely. The poses of the lion and unicorn supporters are quite different in each case. In the Leith Customs House example, to overcome the difficulty of a relatively shallow pediment, the supporters are depicted stretched out on the ground, whereas in the other two examples they are much more upright, suggesting that such space constraints were not a consideration when they were carved. If our example was also designed for display on the pediment of a building then it has been suggested that that pediment would have had to have been very steep indeed given the shape of the composition. The second known example was also published in the Heraldry Society of Scotland’s journal Double Tressure, this time by David M Bertie.

The Steell family and their significance John Steell Snr. (1770-1848) was an extremely talented wood carver with known works including Corinthian capitals in the Signet Library in Edinburgh (still in place today) and an exceptional series of carvings depicting scenes from the life of Mary Queen of Scots for Duns Castle which also survive. He seems to have made something of a specialism out of creating exquisite decorative feature pieces. In addition, he seems to have been heavily involved in the production of shop sign figures, one of which is in the collection of the National Museum of Scotland. It was carved in 1835 and depicts a smoking figure used to advertise various tobacconists in a single premises in Princes Street over a number of years.

Steell’s son, also John (1804-1891), would rise to become Scotland’s most famous sculptor, winning royal commissions and near-universal critical acclaim along the way. It is, however, extremely difficult to gauge the extent of his involvement in his father’s business in the early years of his career. Certainly, as he was apprenticed to his father from the age of 14 (in 1818), he would have played some part in the production of some of these wood carvings and it is the opinion of some experts that both men would have been involved in carving the surviving coats of arms. One other coat of arms by the Steell family is known in photographs but sadly does not survive. This was executed for the pediment of the Theatre Royal in Edinburgh and a photograph from 1858 showing the carving in some detail does exist. The photograph is of sufficient quality to be able to make out the words ‘I Steel’ and ‘Edin’ underneath the carving on the front of the piece. The Theatre Royal was built in 1811 and there is some debate as to whether the carving would have been executed at that date, meaning it was purely the work of Steell Snr., or whether it might have dated from the 1830 refurbishment of the theatre, thus raising the possibility of John Steell Jnr’s involvement.

John Steell Snr. was declared bankrupt in 1819 and his belongings were inventoried and seized in part payment of his debts. One entry in this inventory is especially relevant as it reveals “a carved achievement of the ‘kings arms in their present state’ was valued at £24. It’s not clear if this refers to an unfinished carving or the currency of the achievement.” A set of carving tools belonging to John Steell Snr. is preserved in the collection of the National Museum of Scotland. We are indebted Christopher Coles for his research into this piece.