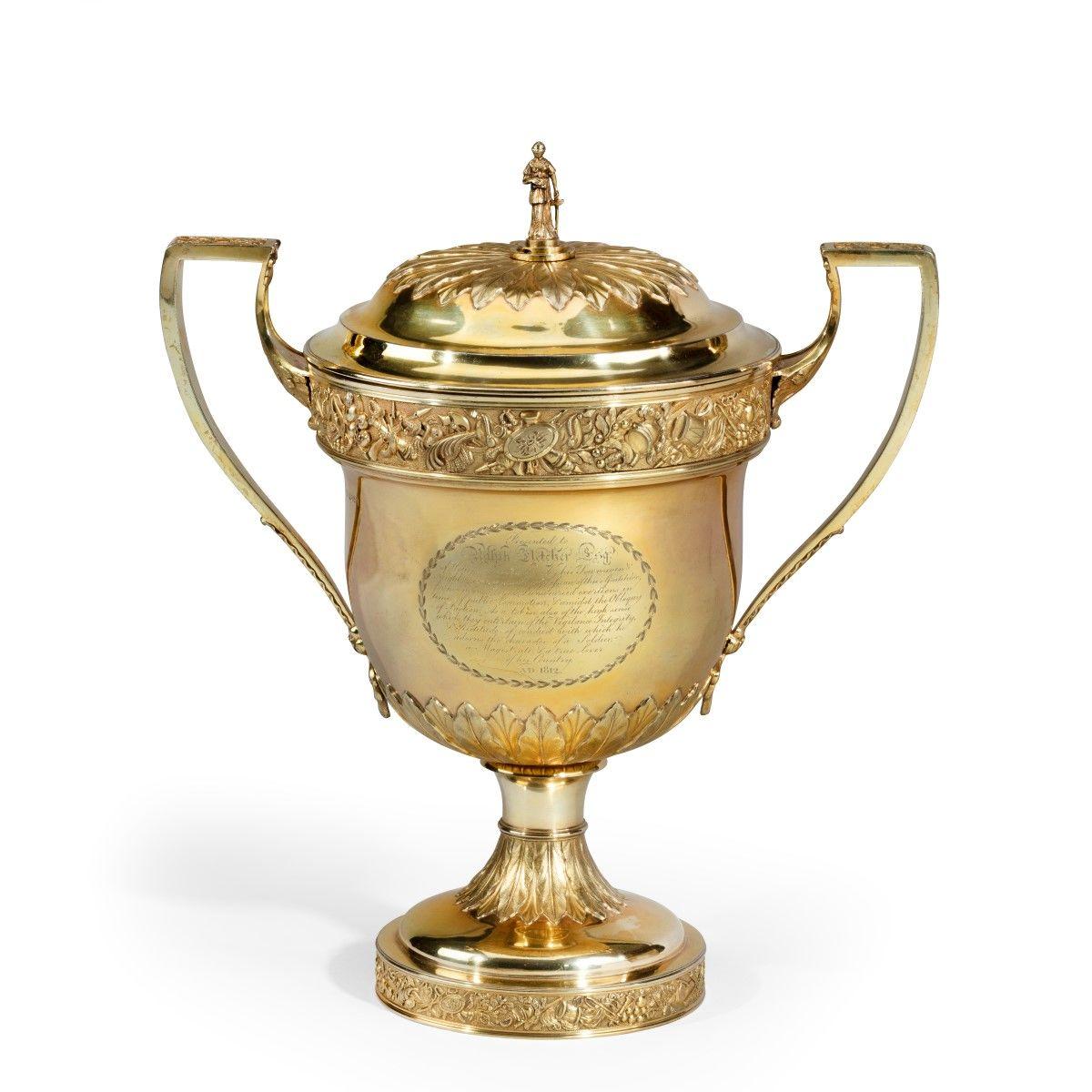 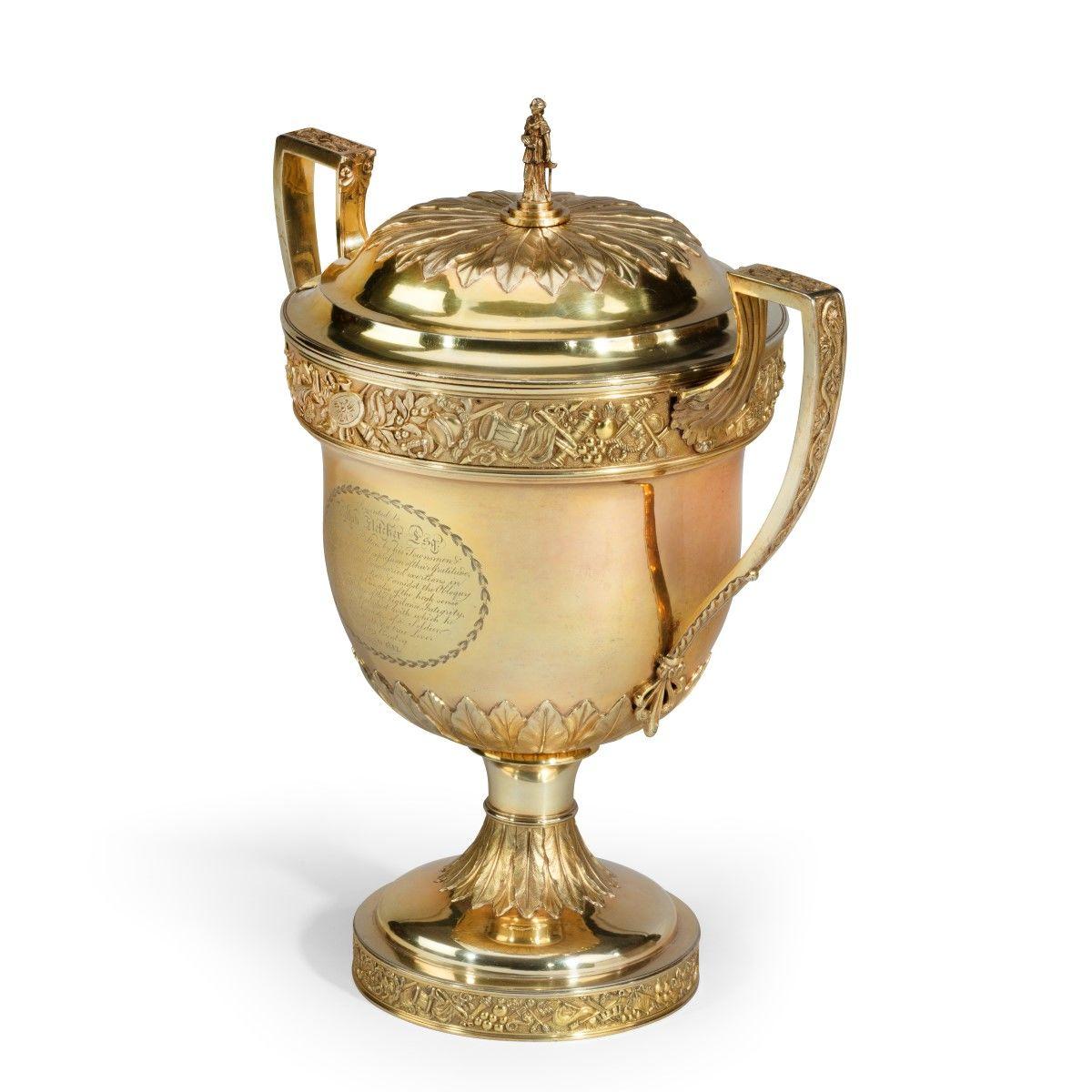 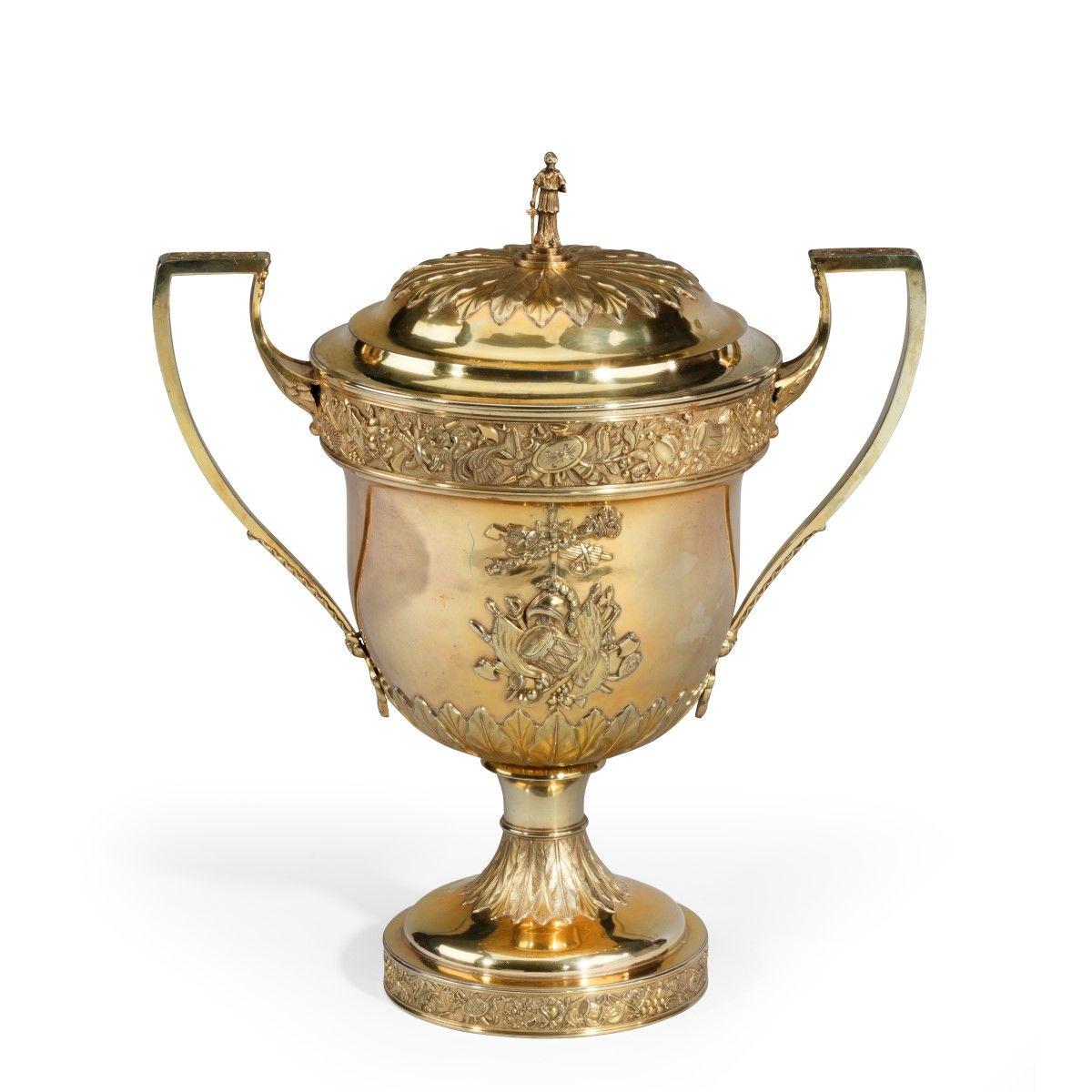 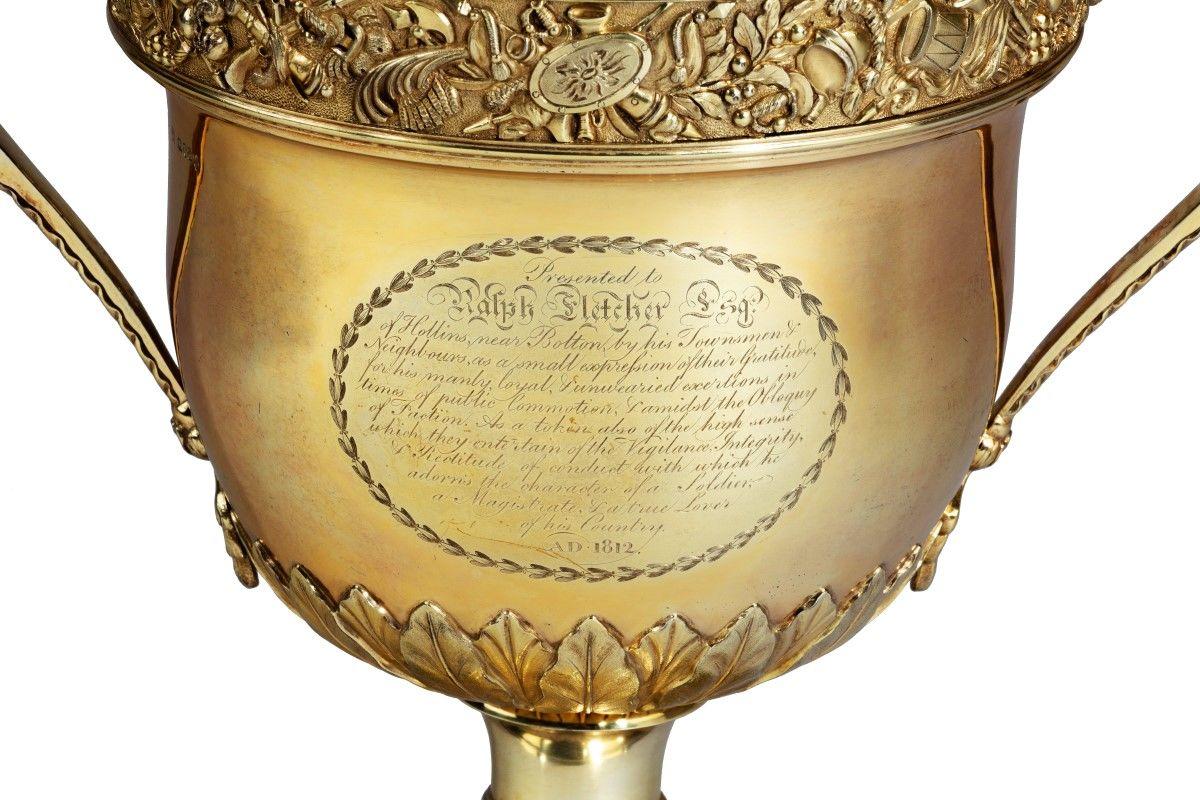 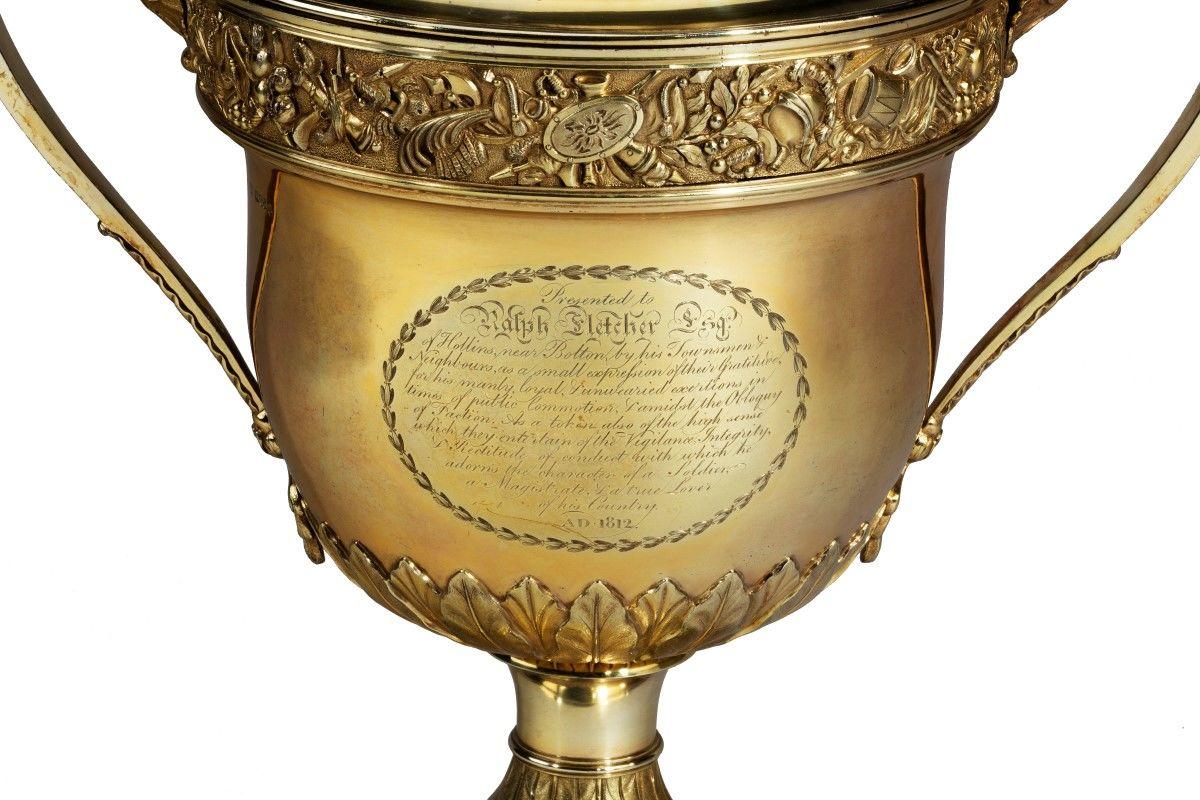 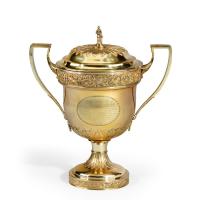 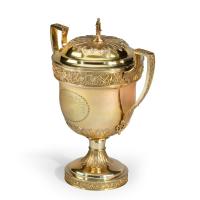 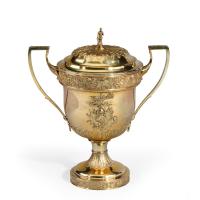 A monumental Regency silver-gilt presentation cup and cover, Peter and William Bateman, London, 1812, PRESENTED TO ONE OF THE MAGISTRATES AT PETERLOO.

Vase form with borders of military trophies including shields, swords, drums, cannon and cannon balls, plumed helmets and laurel, applied obverse with a similar trophy pendant suspended from crossed fasces, sword and tipstaff, reverse engraved with a presentation inscription on matted ground within a laurel wreath, also chased with stiff leaves, cover mounted with figure of Justice finial,
Presented to RALPH FLETCHER ESQ. of Hollins, near Bolton, by his Townsmen & Neighbours, as a small expression of their Gratitude for his manly, loyal, & unwearied exertions in times of public Commotion, & amidst the Obloquy of Faction. As a token also of the high sense which they entertain of the Vigilance, Integrity, & Rectitude of conduct with which he adorns the character of a Soldier, a Magistrate, & a true Lover of his Country. A.D. 1812.

During 1812, the year of the cup’s presentation, Luddites had been attacking Lancashire cotton mills in reaction to the widespread introduction of power looms. On 28 April 1812, Westhoughton Mill near Bolton, with 200 steam powered looms, was targeted and despite the late intervention of the militia, was burnt to the ground. In the reprisals which followed, coordinated by Fletcher, four men were hanged and nine transported. Although his spies were suspected of inciting the violence at the mill, for this service and his other activities against the Luddite threat, Fletcher was voted this cup at a meeting on 12 July 1812 chaired by his fellow magistrate Thomas Ainsworth.
By 1819, the Luddites had been suppressed only to be replaced by a new popular movement for political reform. On 16 August 1819 the Manchester Patriotic Union, a group agitating for parliamentary reform, organised a mass demonstration attracting up to 60,000 people. The local magistrates, including Fletcher, met in a house overlooking St. Peter’s Field where the crowd had gathered. When their attempt to arrest the speaker at the rally failed, they summoned the cavalry to help enforce the warrant. The local yeomanry responded first but, inexperienced, panicked and started cutting down the crowd. Regular Hussars then arrived to disperse the demonstration creating further chaos which led to the deaths of at least 11 people with a further 600 wounded. During the melée, Fletcher was seen beating some demonstrators with his stick.

Height 17 inches (43cm); weight 115oz (3577g)
This monumental trophy cup was presented to Ralph Fletcher (1757-1832), colonel of the Bolton Volunteers, deputy Grand Master of the Grand Orange Lodge of England, spymaster and one of the local magistrates who triggered, then witnessed, the tragic events leading to the 1819 Peterloo Massacre in Manchester.

With family wealth derived from the Lancashire coal mines, Fletcher was a fierce loyalist who used his public roles as a soldier and magistrate to suppress radical political activism in the cotton towns of the north west of England whilst also running government spies and agent provocateurs in the region. In 1808, after the Bolton Volunteers disbanded, Fletcher took command of the local militia.
Despite their responsibility for decisions which led to the massacre, the magistrates were exonerated by the government and congratulated by the Prince Regent. In 1822, Fletcher received another large cup in appreciation of his services, this time from the people of Bury. In Mike Leigh’s 2018 film Peterloo, Colonel Fletcher was played by Philip Whitchurch.

The Property of a Royal House