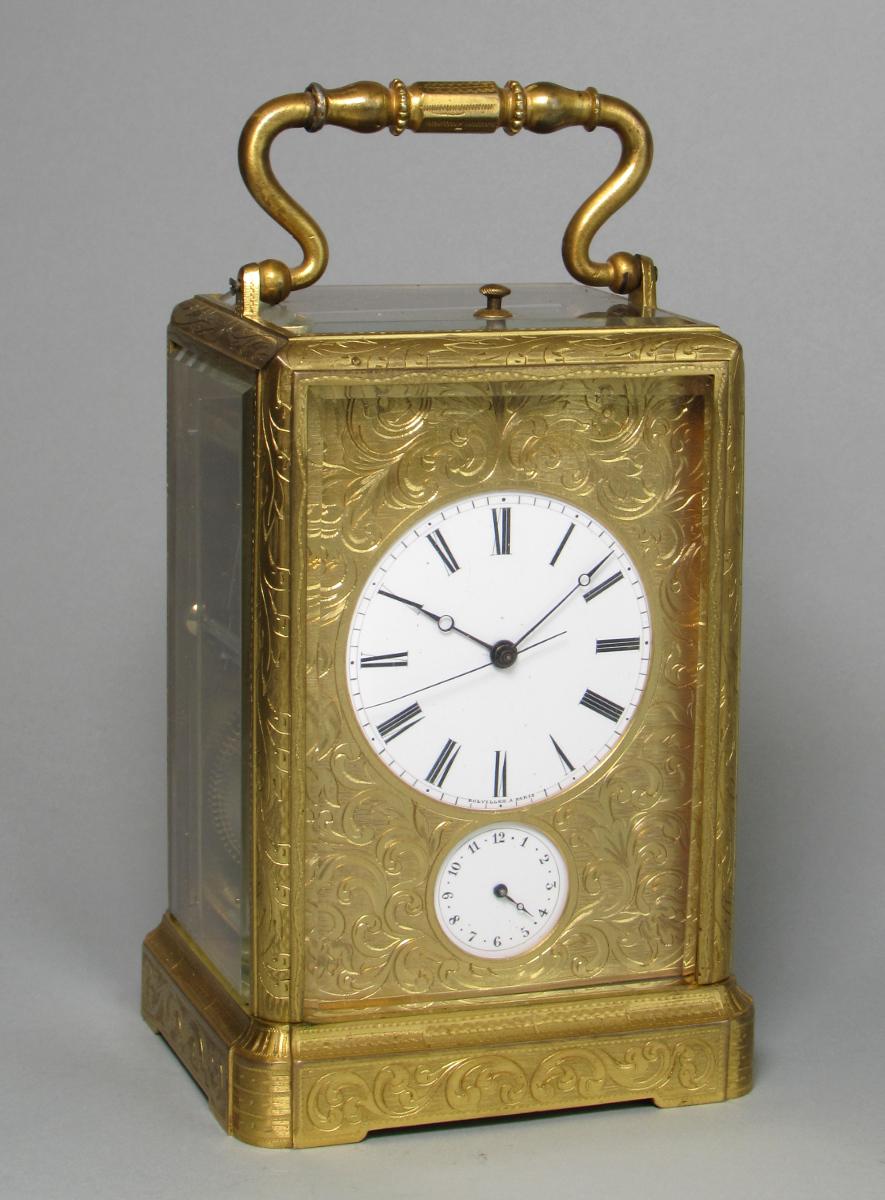 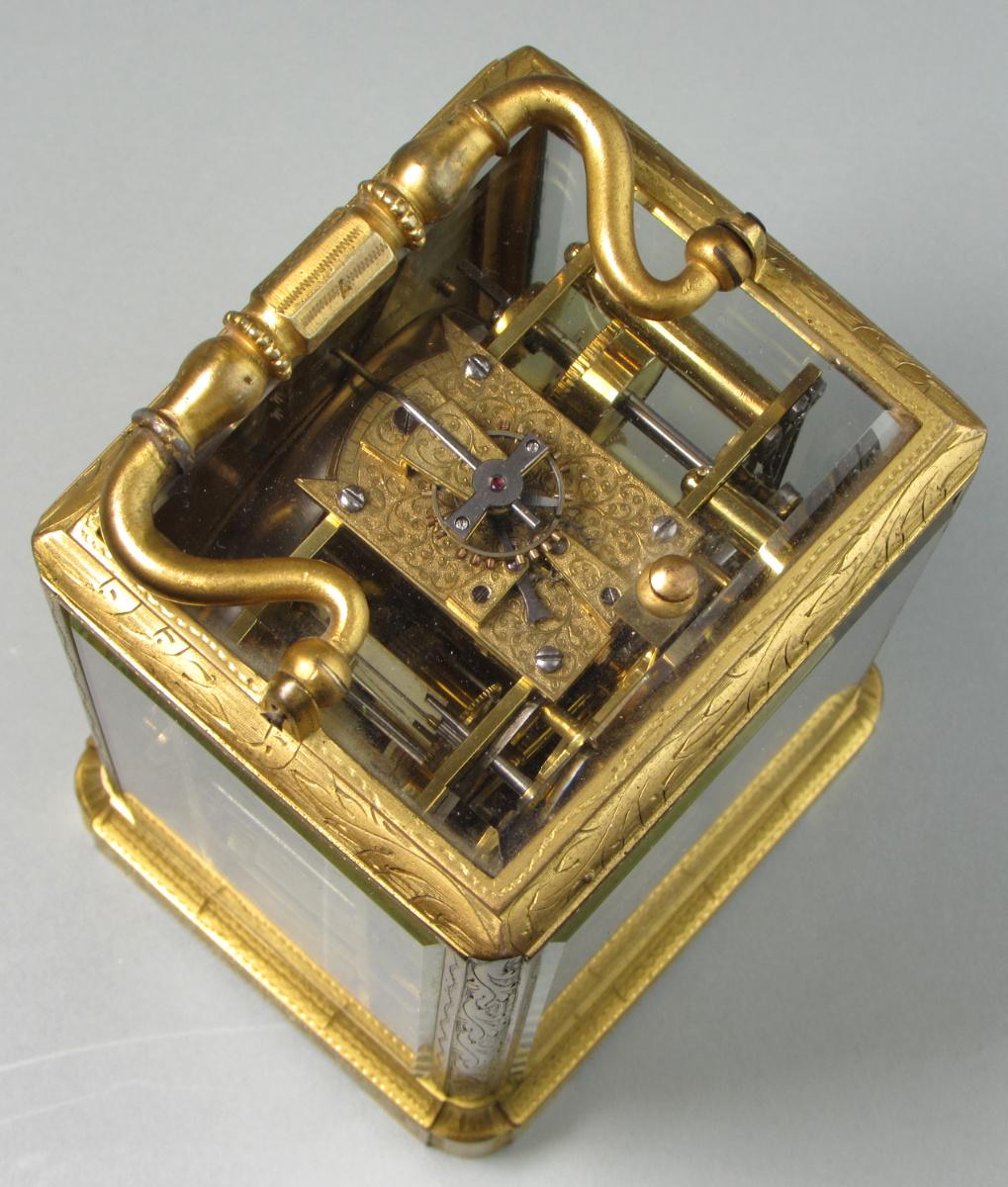 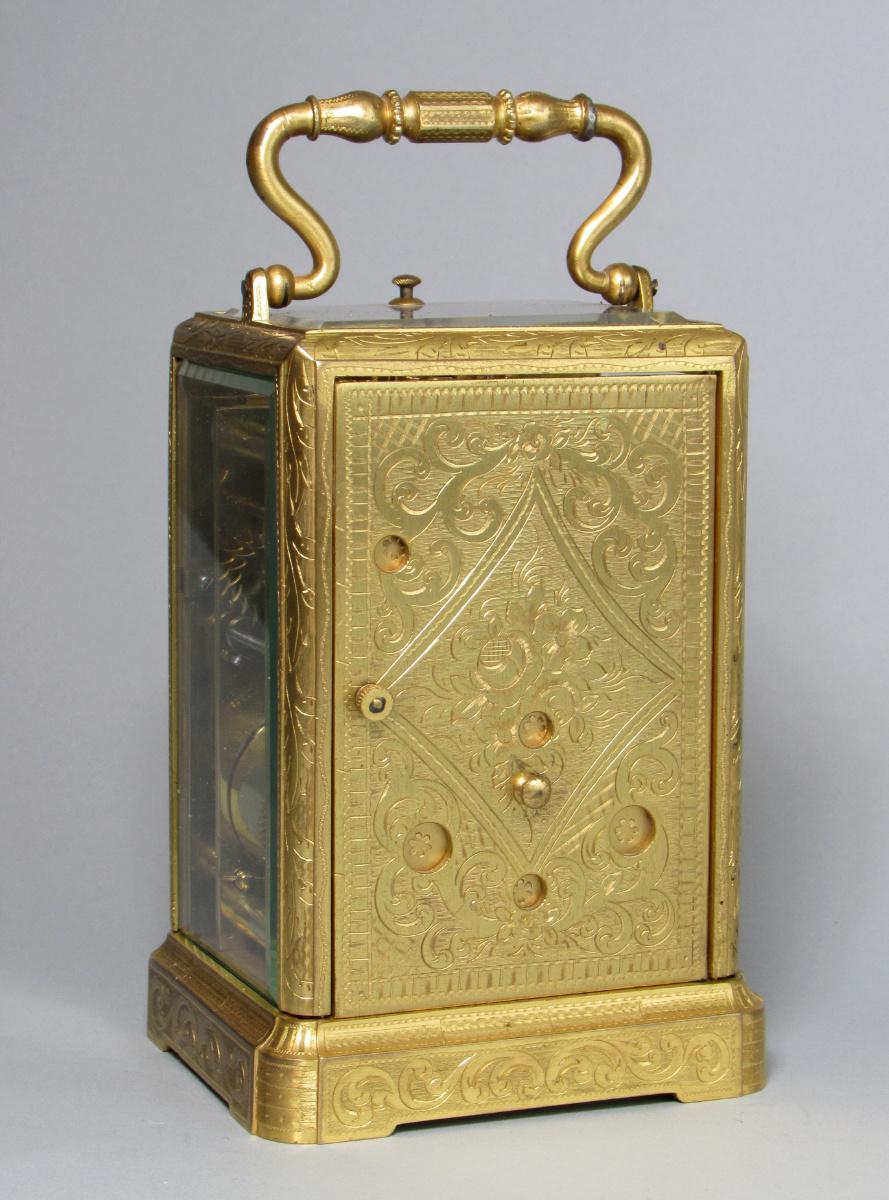 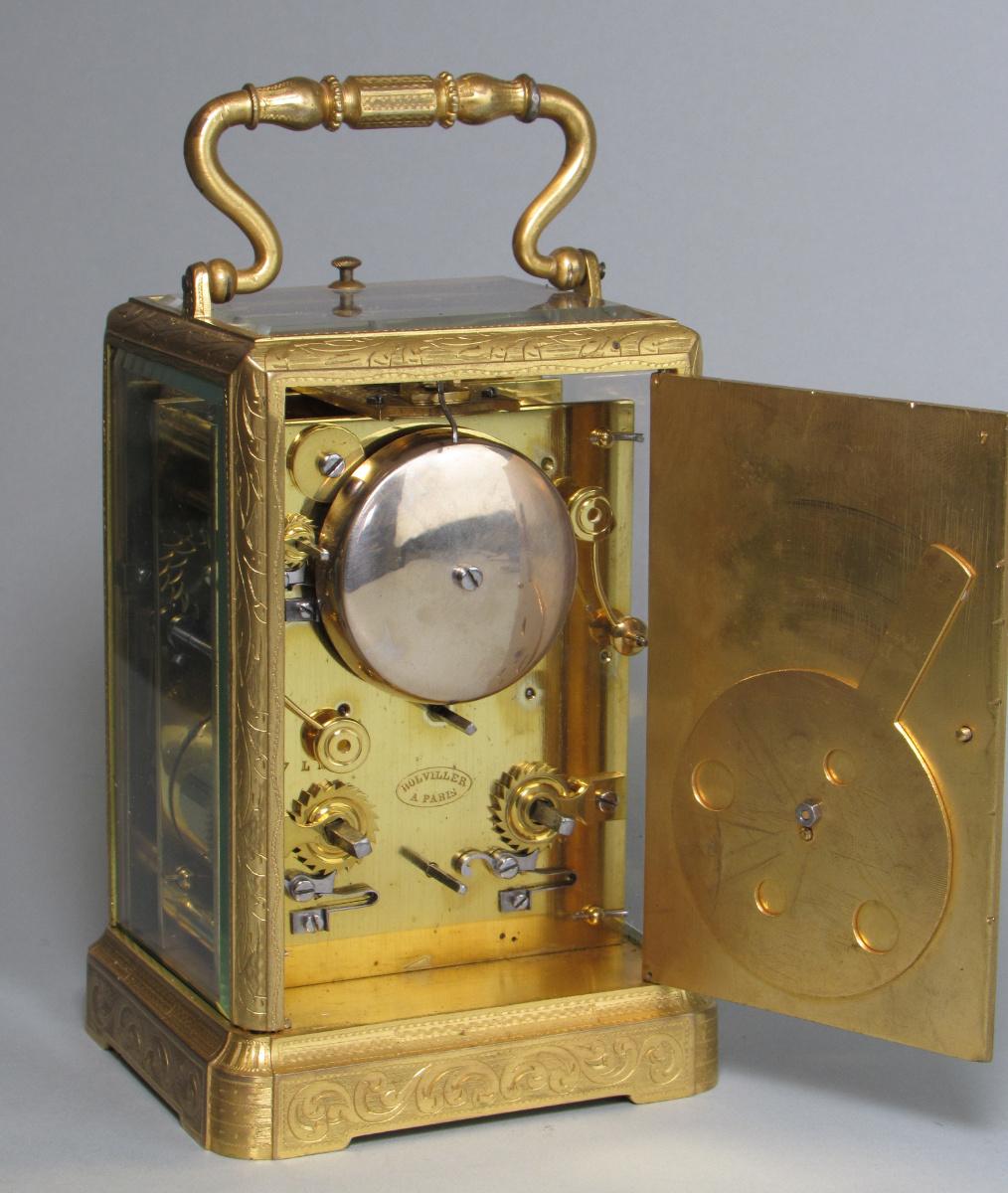 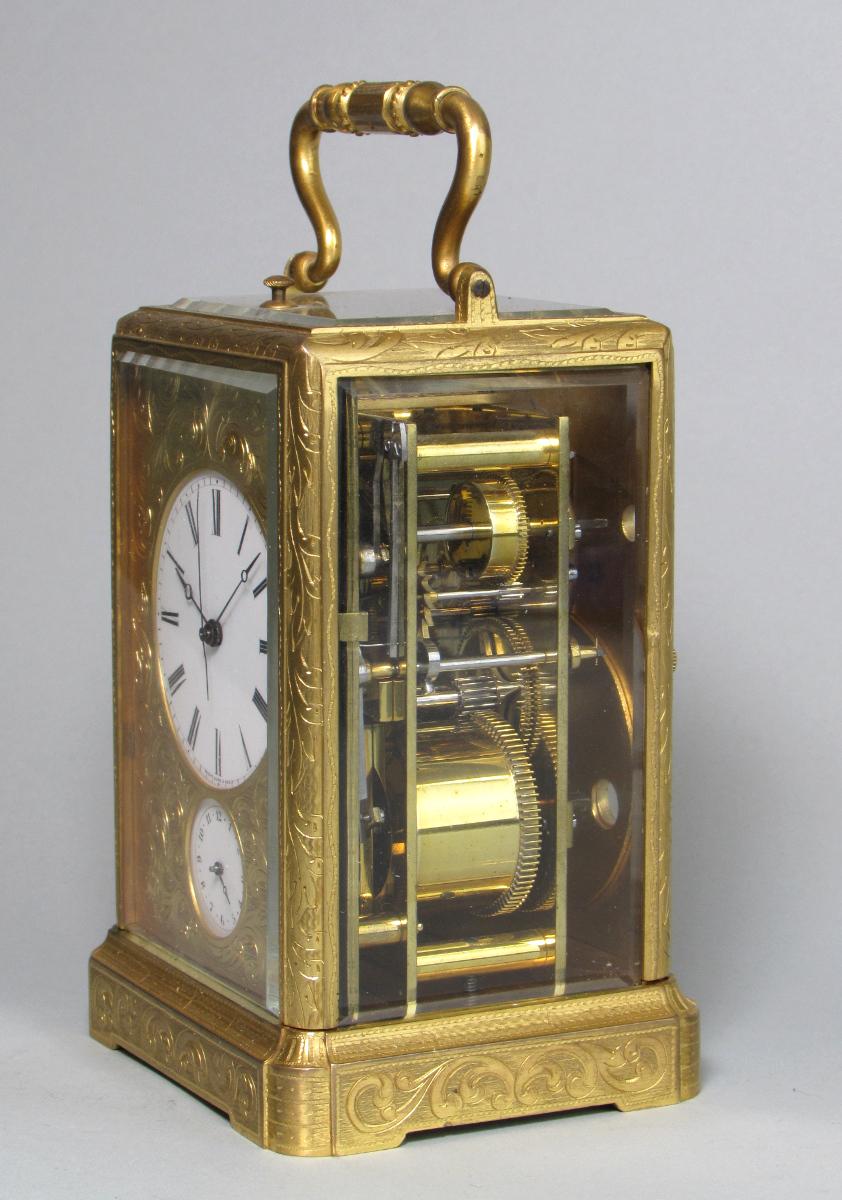 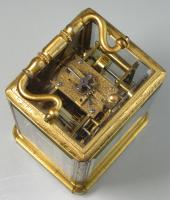 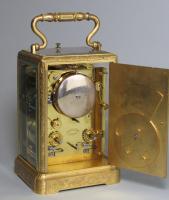 ​The eight-day duration movement strikes the hours and half-hours on a bell with a push repeat button to the top, sounding the last hour at will. The top of the platform lever escapement is engraved in the usual fine Japy frères style being scroll decoration set on a matted ground as also seen on clocks signed for Japy and Bovet frères, another fine maker supplied with movements by Japy frères.

The backplate is stamped with the Bolviller trademark, an oval with the wording Bolviller a Paris inside, along with the serial number 470 LM. Beneath the bell is seen the three-piece wheel work required to run the seconds hand, as also see on both Japy and Bovet frères examples; indeed, the three movements with which comparisons are made are near-identical. It is interesting to note that the frontplate of the movement  to the Japy frères clock, stock number D466, is stamped 236 L.

The white enamel dial has black Roman numerals, a subsidiary alarm setting dial, fine blued steel moon hands of a type seen on the earlier clocks by this maker, a sweep seconds hand and is signed Bolviller a Paris.

The one-piece case is fully engraved with floral decoration and has an engraved solid rear door with shutters that open to facilitate winding and setting the hands, along with a matching engraved mask to the dial.

​Alongside my research into other French carriage clock makers, I have been undertaking work on Bolviller and his associates with a view to publication at a later date.

As a summary I now know that Moïse Bolviller was born in Metz on the 7th of August 1800, the son of Joseph and Hintche Bolviller Terquenne. He is first recorded as working in Paris in 1825 at Barre-du-Bec having married Fanny Alkan in 1822 and had moved by 1829 to rue Saint-Avoye 25. Following a robbery at rue Sainte-Avoye in 1835 he moved to rue Charlotte 16 where he is recorded in 1837, advertising as a maker of watches and musical boxes. By 1845 he was at Rue de Bondy 30, and then in 1854 had moved to rue Vendome 12, where he was advertising watches, music boxes, clocks, mechanical singing birds, and watches running 15 days with chronometer escapements.

He often used blancs roulants (rough movements) supplied to him by the well-known makers Holingue frères as well as those from Japy frères, the latter usually having a sweep seconds hand as on this example.

In circa 1847 Bolviller went into partnership with the well-known escapement maker Celestine Phillipe Gontard with whom he was awarded a patent in the following year for a detent escapement, the patent registered at the Gontard address 12 rue St, Hyacinthe, St. Honoré, whereas Bolviller is recorded working at rue Vendome 12 at this time. I have a fair few carriage clocks signed on the dial for Gontard & Bolviller, Paris but they are always just signed for Bolviller on the movement. These clocks are usually identified by having a W as part of the serial number with a number of the movements in this sequence supplied by Japy frères.

Bolviller died in December 1874 at Boulevard de Temple, 42 in the 11th Arrondissement of Paris. His testament of the 10th of February 1874 suggests he was a religious man. The business was continued by his son-in-law Houlmann.

​Frédéric Japy (1749-1812) founded the clockmaking concern in Beaucourt, Montbéliard and having left school was apprenticed to his grandfather, a watchmaker named Jacques Georges Frédéric Japy. Following this he worked with his father at a time when most clock parts were still made individually by hand. Japy bought in machines to standardise the production and when he was unable to obtain tooling that would do the job he required, he would design and make the relevant machinery.

In 1806, he handed the running of the business to his three sons - becoming Japy Frères (Japy Brothers). In the earlier years production continued to the high standards set down by their father, as evidenced by this example, with the carriage clocks being the equal of most others. In the later years the mass production techniques they employed meant a standardisation of the movements, mainly the round-plated examples seen in many mantel clocks, and although the standard was high, never again reached the quality of the clocks produced in the early-to-mid part of the 19th century.