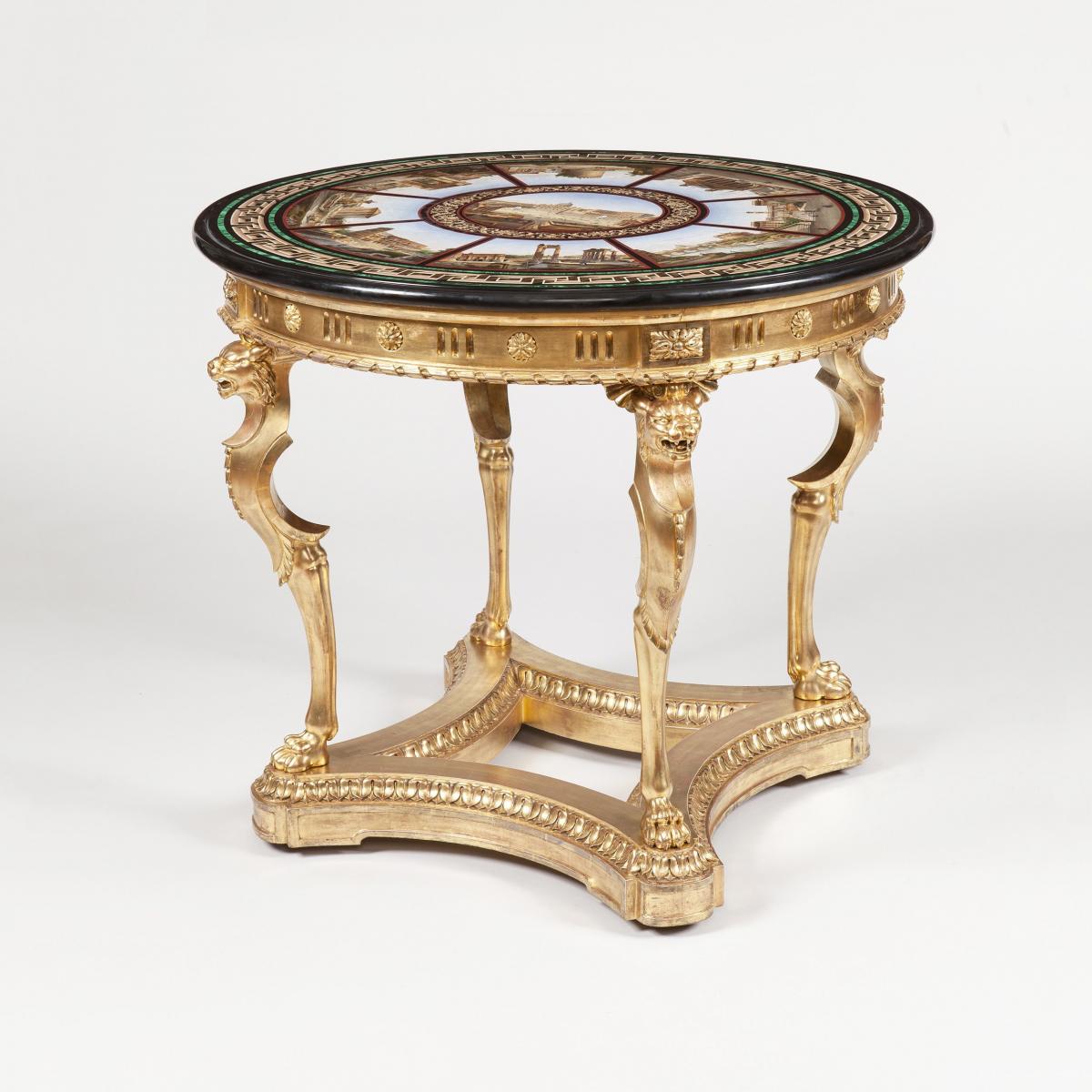 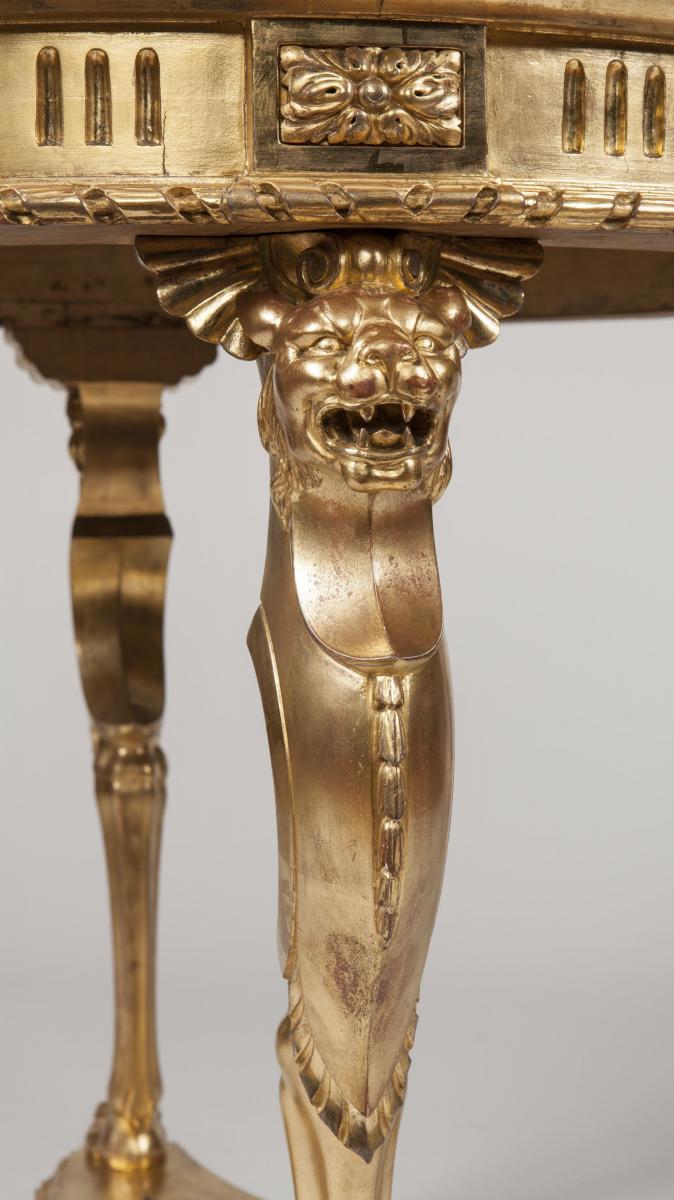 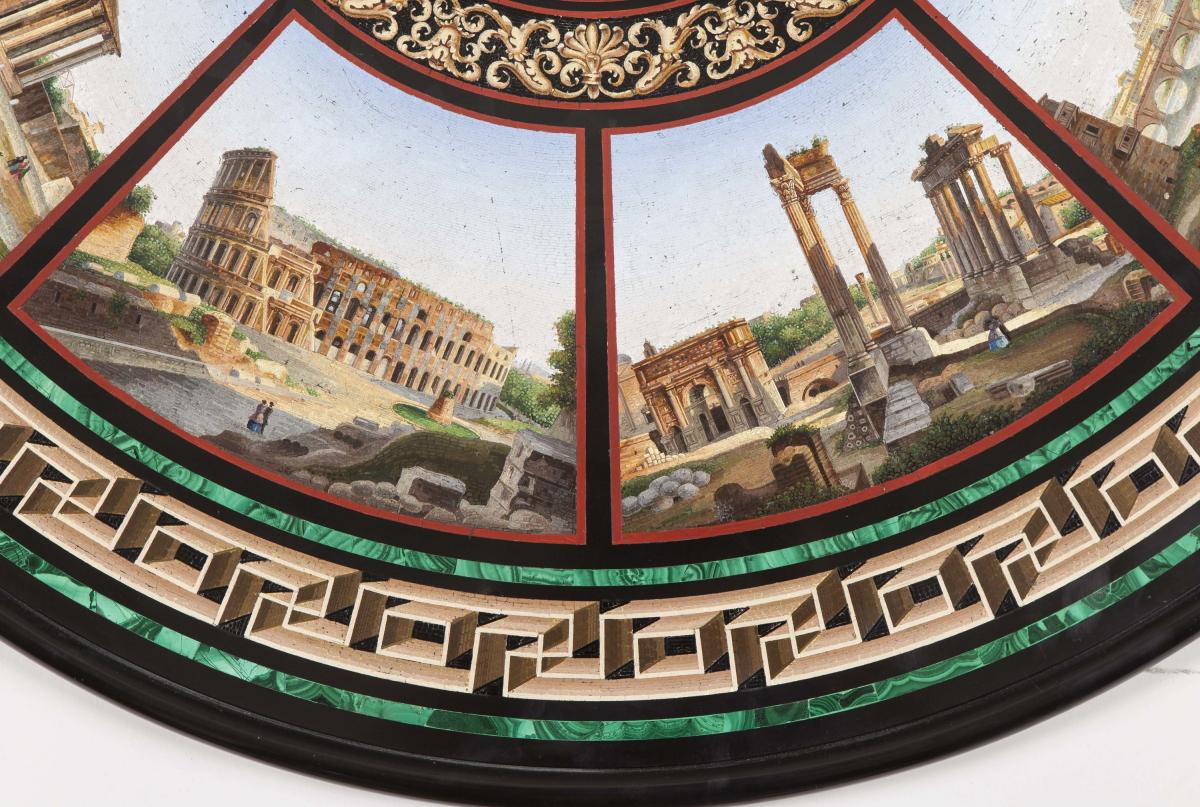 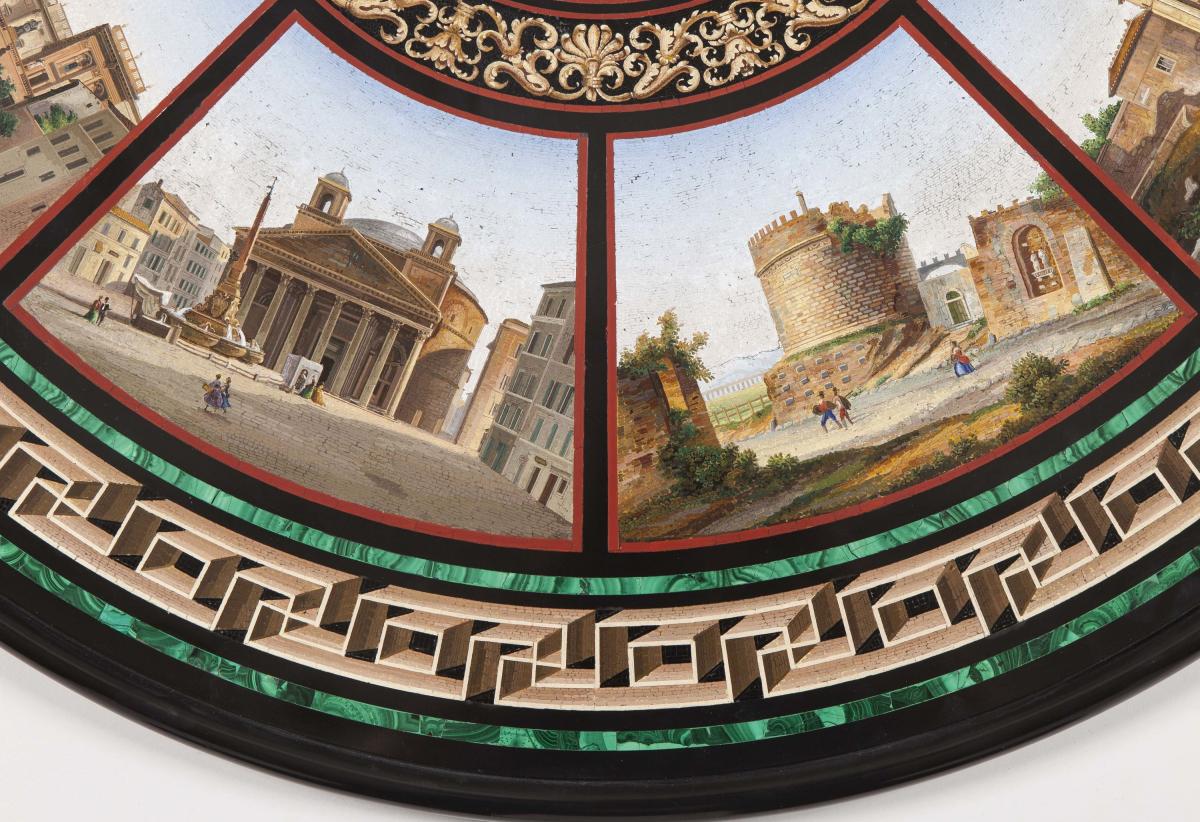 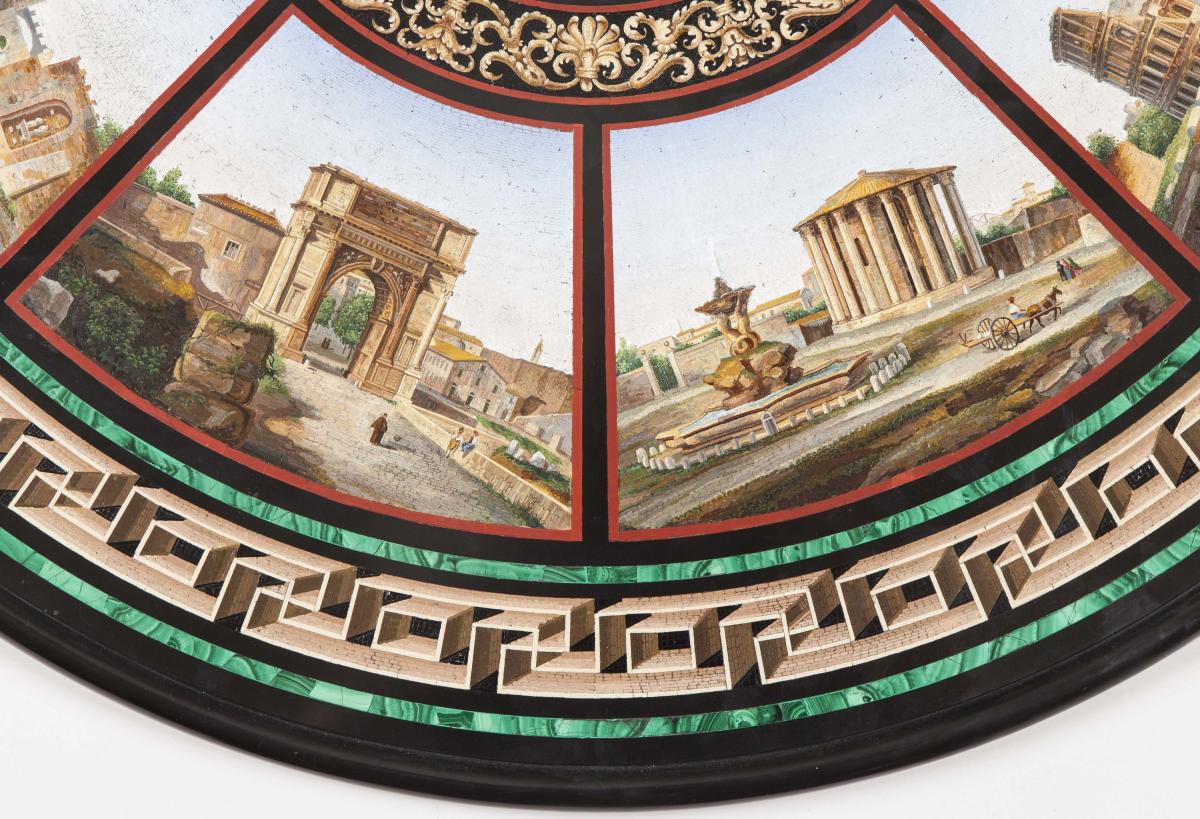 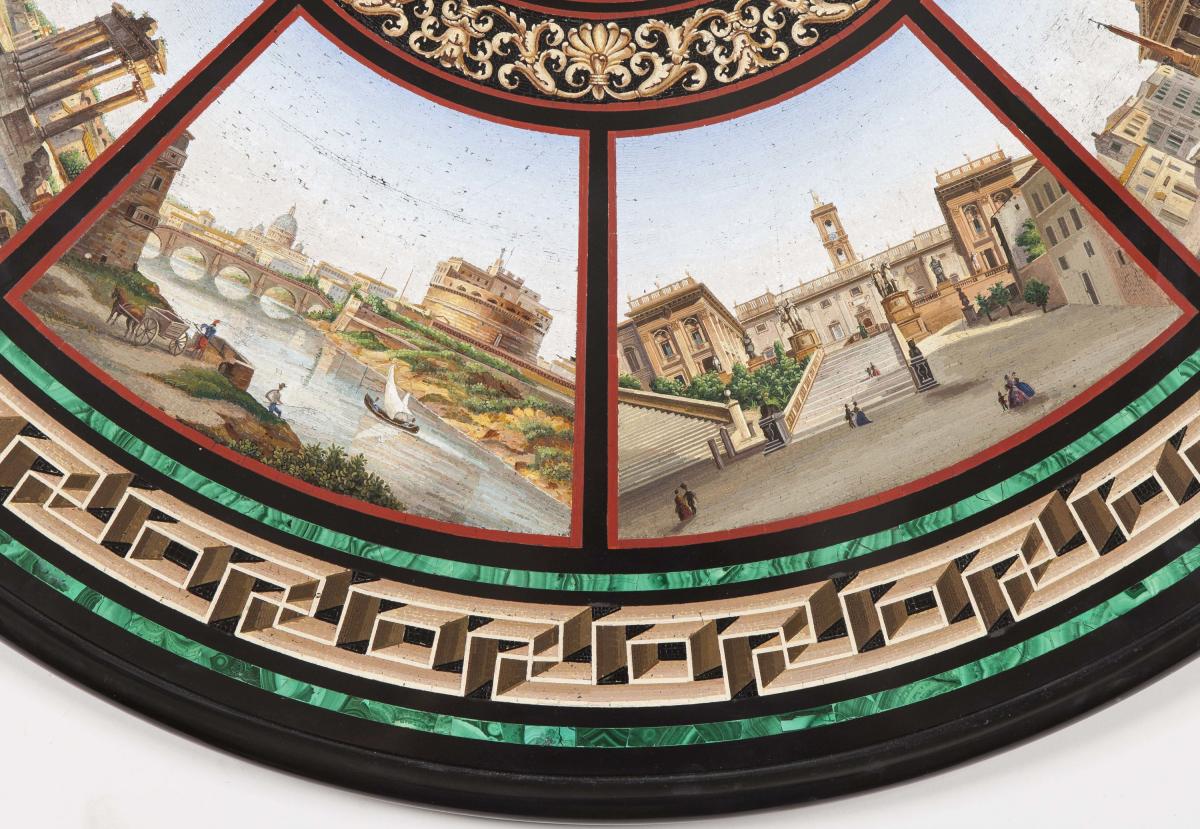 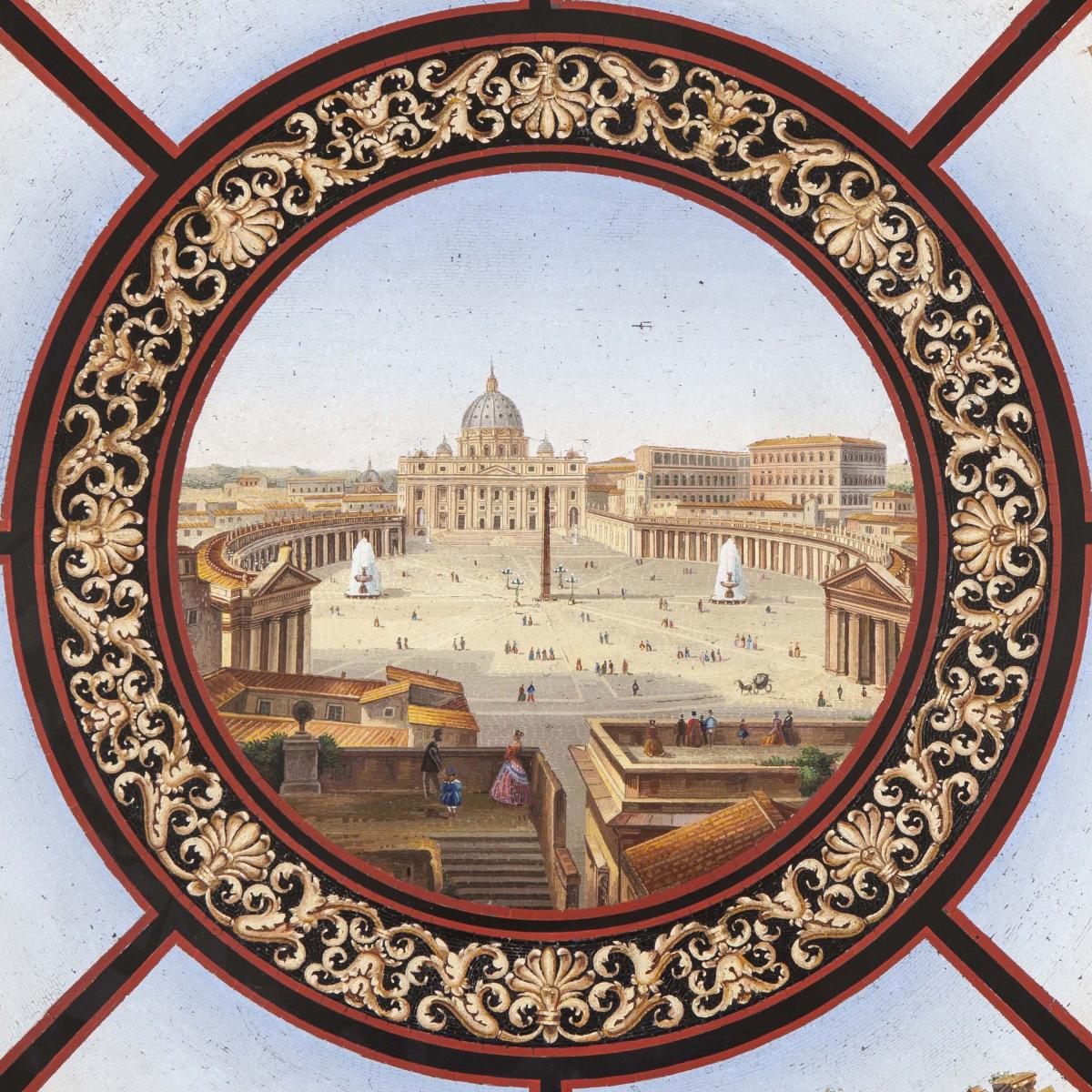 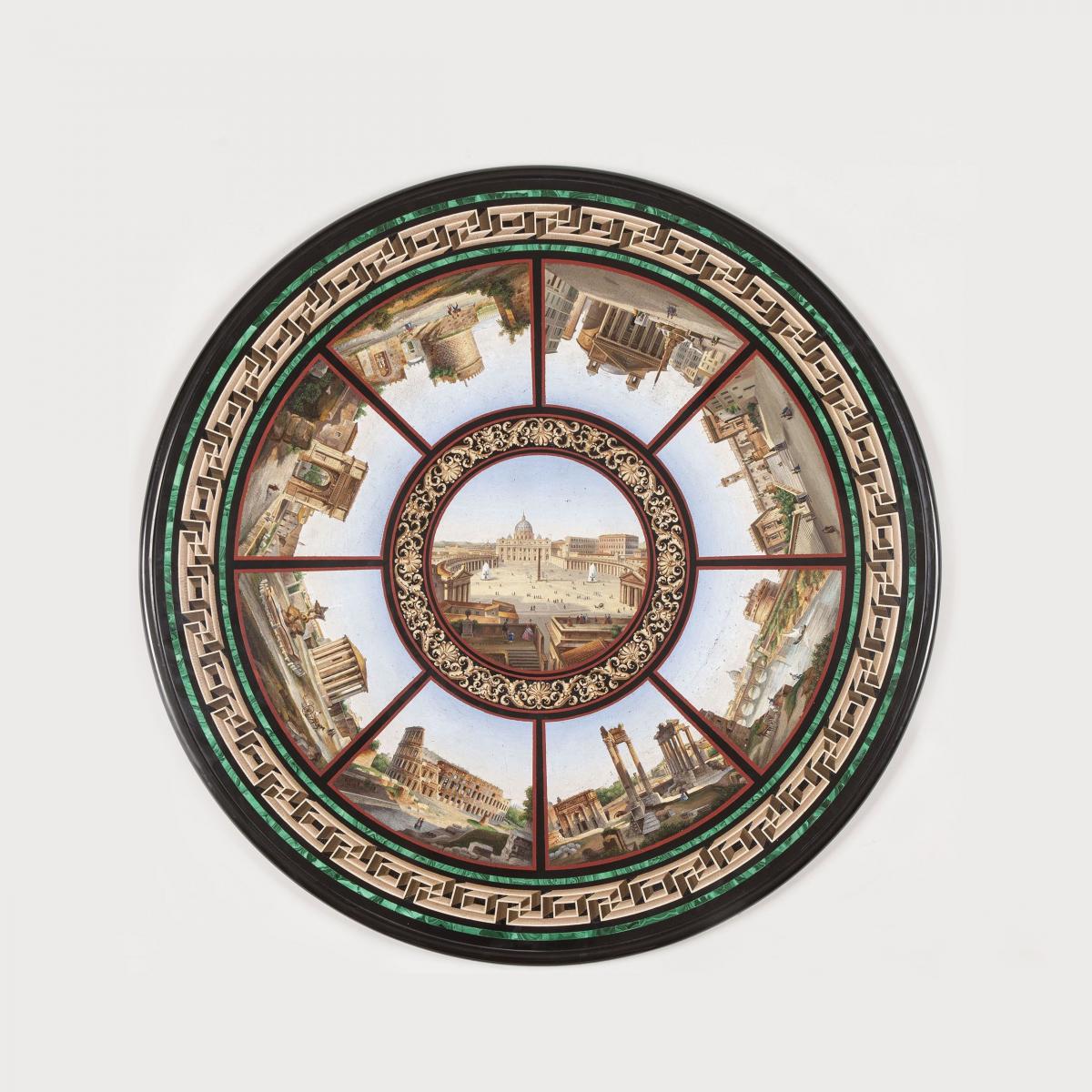 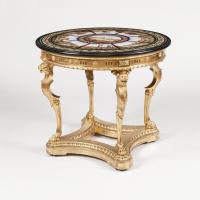 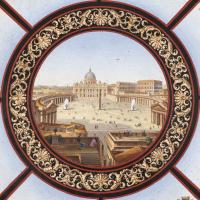 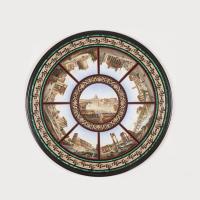 The Top Attributed to Cesare Roccheggiani

The carved gilt wood base in the manner of George Smith having four monopedia supports, each depicting leopards heads atop, with paw feet below, and conjoined by an incurved stretcher base having carved stiff leaf decoration, and raised on castors; the circular platform of marmoro nero, with a stylised Greek Key border within double Malachite reserves; the central micromosaic roundel depicts The Vatican from St Peter's Square, surrounded by eight separate roundels of The Pantheon of the Gods; the smallest of Rome's seven hills, the Capitoline; The Mauseoleum of Hadrian on the Tiber; The Roman Forum, with the remnants of the Temple of Vespasian; The Colosseum; the Temple of Vesta; The Arch of Titus, and the Tomb of Cecilia Metella.

The base is similar in design to designs published by George Smith's A Collection of Designs for Household Furniture and Interior Decoration, 1808. The taste for monopedia supports was of fashion, in the Regency period and models of such were displayed in the 1851 Great Exhibition.  The Macclesfield coat of arms depicts a shield with a central chevron and three leopard's faces.

Views of Roman monuments was the most popular theme used by mosaicists in Rome in the beginning of the 19th century, supplying the flow of wealthy Grand tourists from Northern Europe. From small gold boxes, plaques to tabletops, mosaics were among the most sought after souvenirs from Italy. Tabletops were the most prized and expensive items, either acquired on tour or commissioned by English aristocracy and those of wealth.

The scion of a dynasty of mosaicists, Roccheggiani was perhaps the most successful mosaicist in the last quarter of the nineteenth century. He is doubtless related to Lorenzo Roccheggiani, a late eighteenth-century master mosaicist at the Vatican, whose work included the altarpiece, Crucifixion of St. Peter after Guido Reni. Nicolo Roccheggiani, possibly Lorenzo's son, was also a principle artist at the Vatican, involved in executing the famous tabletop Achilles Shield commissioned by Napoléon Bonaparte, and later gifted by Leo XII to Charles X of France in 1825, and now preserved in the Museum of Versailles.

Establishing his own workshop on the Via Condotti in 1874, a late nineteenth-century guide book to Rome lists him as a supplier of mosaic pictures, tables, cabinets, paper weights and gold ornaments. His extensive retail production indicates that Roccheggiani ran a large workshop of mosaicists, as well as goldsmiths and craftsmen. The finest and most costly objects were tabletops (such as the present circular table) and large scale pictures acquired by wealthy and important patrons and displayed at international exhibitions; today they are in possession of discriminating collectors and museums.

The present table has all the hallmarks of the finest work by Rocchegianni, incorporating-and improving on- components also used by his master, Michelangelo Barberi. His extraordinary skill is evident in his very large and rectangular mosaic of St. Peter's Square, signed and dated C. ROCCHEGGIANI /ARTISTA/ VIA CONDOTTI NO. 15 / ROMA 1879 that sold Christie's, London, April 2010, lot 268 for an astonishing $730,538; his matching view of the Roman Forum, identically signed and dated, sold Christie's, London, December 2010, lot 245, for $533,192. A smaller table top, presenting the same scenes and displaying the characteristic double malachite reserves enclosing a trompe l'œil Greek key is recorded in a private collection (see Grieco & Gambino, 2001, p. 184); while a signed Rocchegianni table top similarly exhibiting these fine qualities was sold Sotheby's 2015.