The Maxwell of Kirkconnell Suite. A very fine George III Tray together with its original Waiters. Made in London in 1792 by Crouch & Hannam 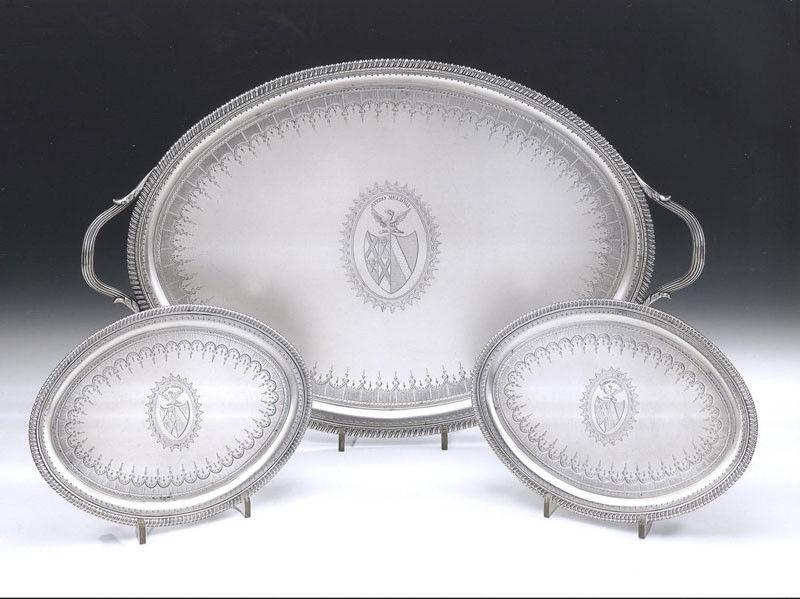 The Tray and Waiters have a stepped gadrooned rim which is decorated with bright cut festoons. The Waiters stand on four cast scroll panel feet with a gadrooned border.

The Tray has reeded side handles which are attached to the main body with acanthus mouldings. The main body of each piece is engraved with a crisp bright cut raying outer band, enclosing a central shaped oval bright cut cartouche.

James Maxwell of Kirkconnell was a Jacobite officer out in the 45 with the Young Pretender. After the Prince's defeat he fled with him to France, but was allowed to return to Scotland in 1760.

He was famous as the author of his "Narrative of Charles, Prince of Wales's expedition to Scotland in the Year 1745." He died in 1762, leaving a son whoses arms are engraved on these three pieces.

The Arms are specifically those of James Maxwell of Kirkconnell, who married Clementina Elizabeth Frances, daughter of Simon Scroope, of Danby County Yorks. She died without issue in 1815 and he died in 1827.

The estates passed eventually, via the Maxwell heiress, to Robert Witham Esq of Lartington Hall, County Yorks, who was related by marriage to the Maxwells. All the families mentioned were Roman Catholic gentry of ancient lineage.

The Scoopes of Danby being one of the most powerful families in the medieval peerage.

It is most unusual to fine a Tray together with its origianl waiters, as many were split up over the generations and Trays are scarce from the Eighteenth century.

Crouch and Hannam were specialist tray and waiter makers working in Giltspur Street, when these pieces were made.

A similar set of four waiters, also by Crouch and Hannam, are contained within the Queen's personal collection of silver and are illustrated on plate 32 of "The Queen's Silver" by A.G.Grimwade.