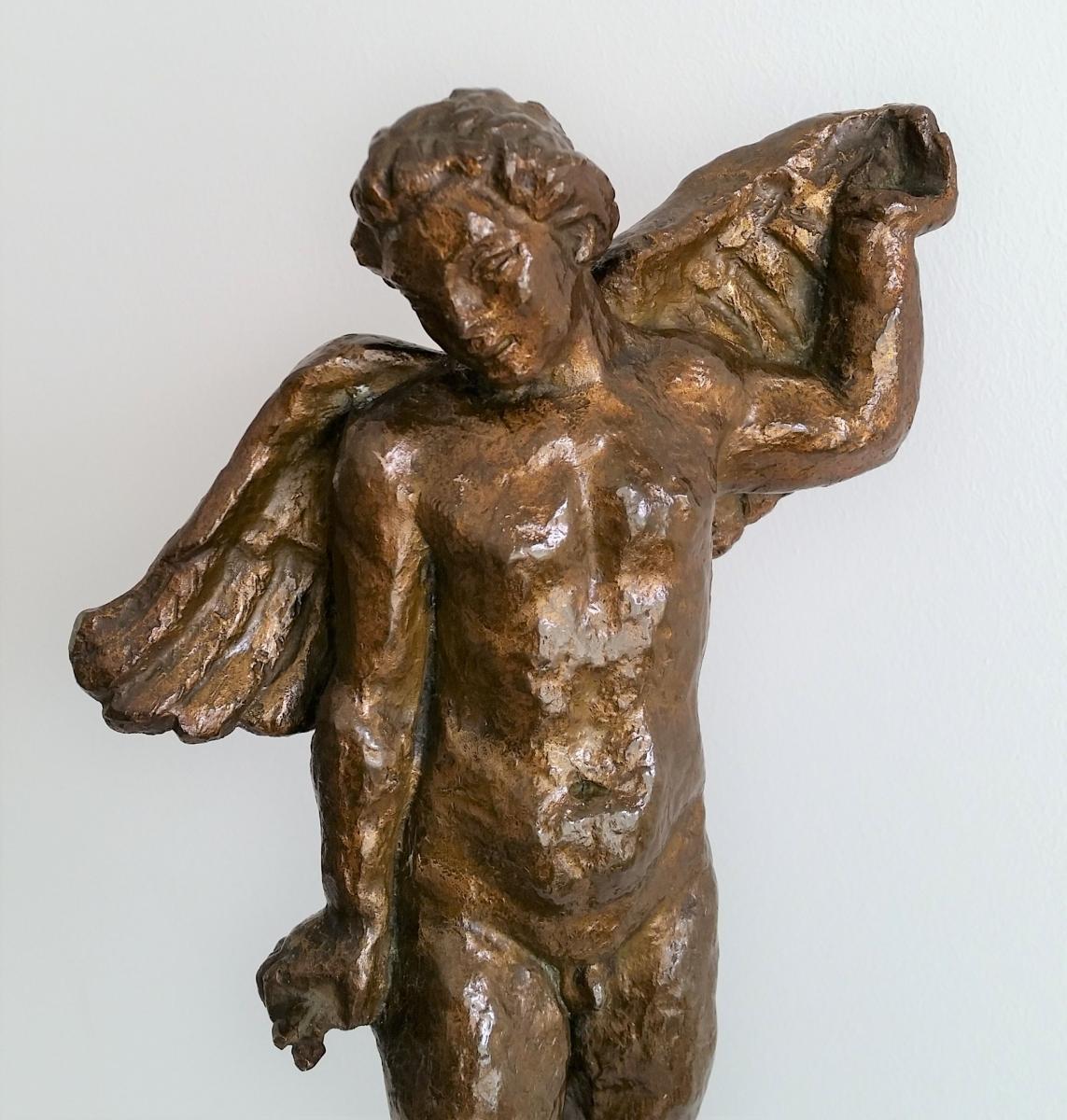 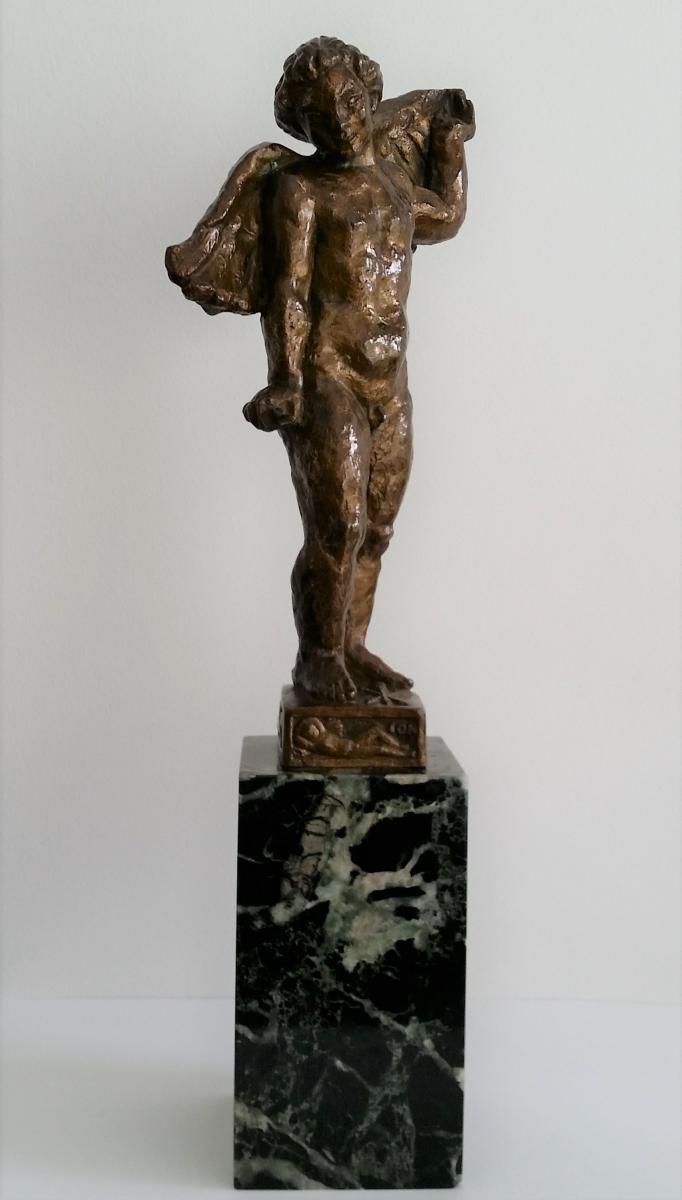 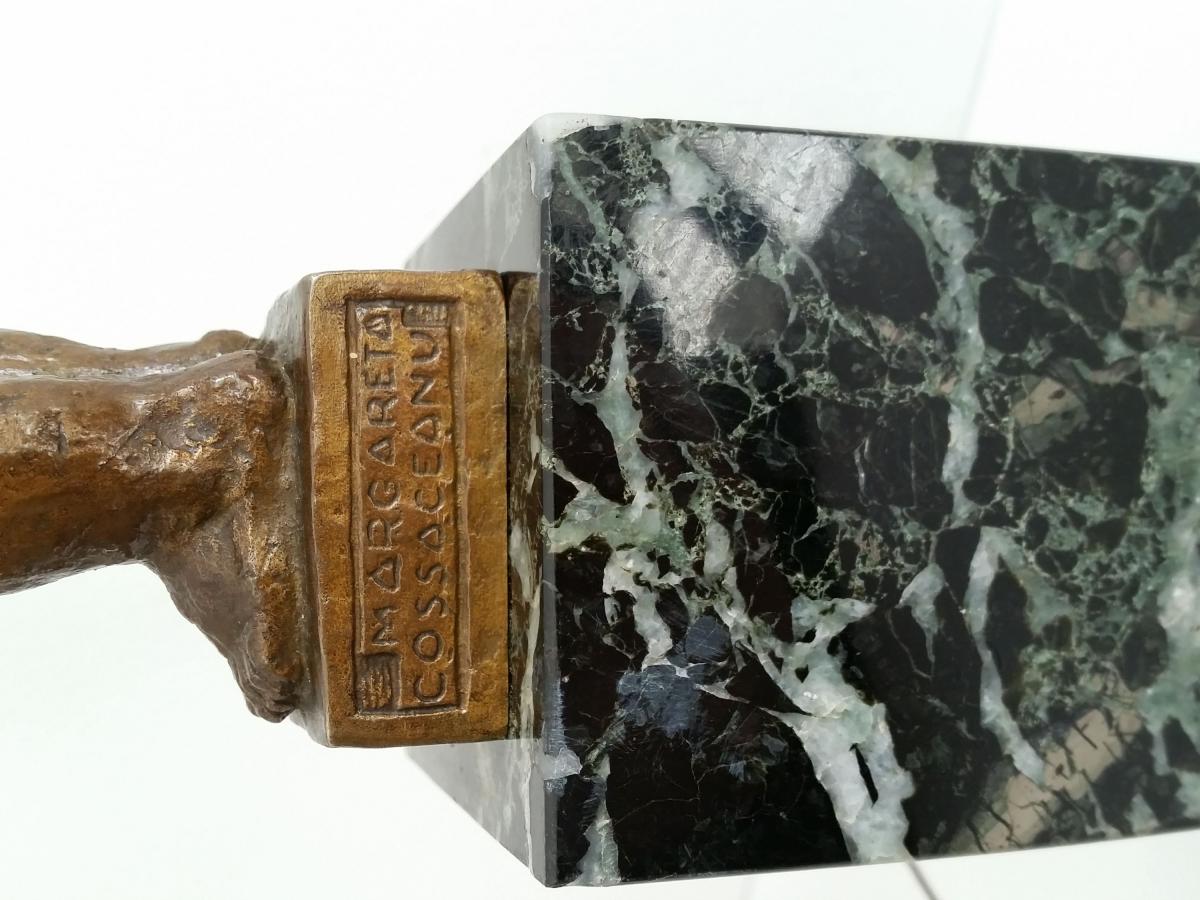 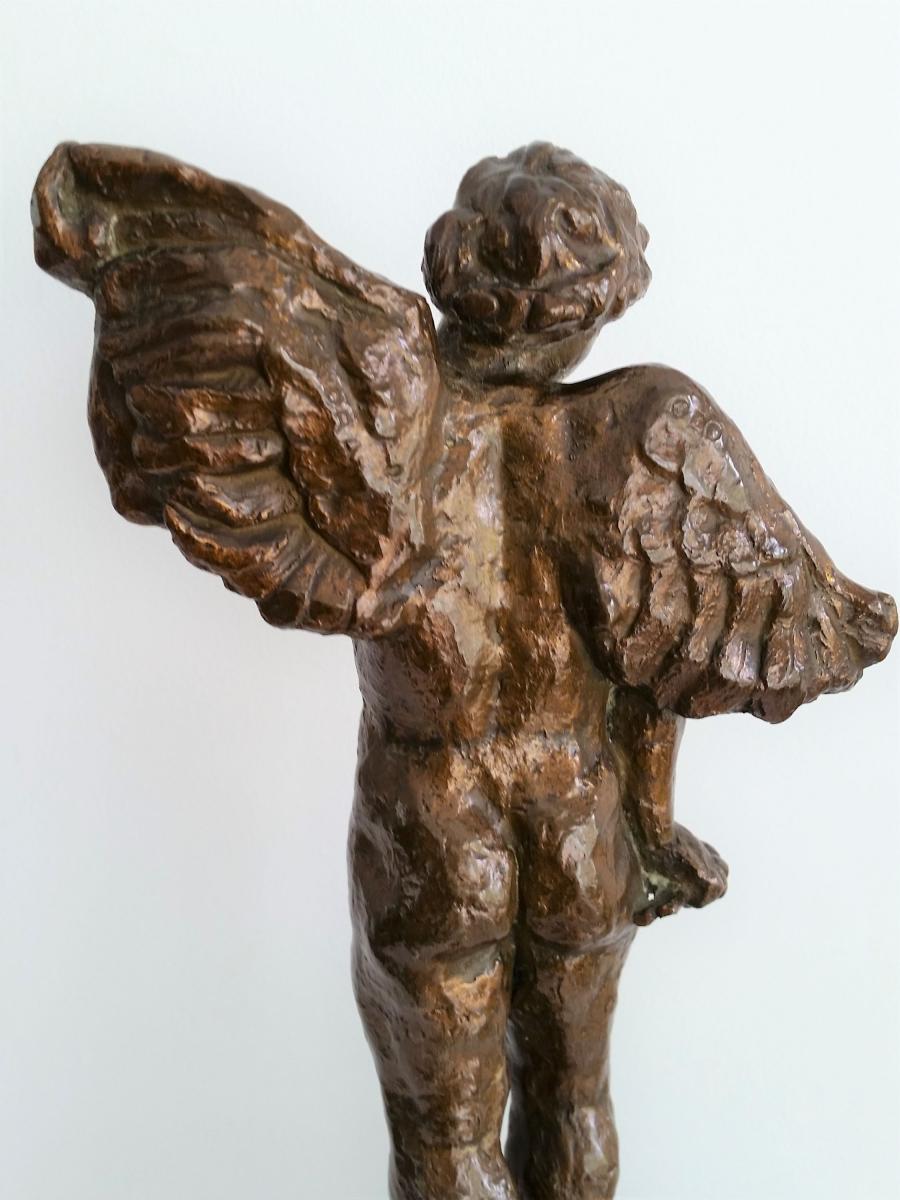 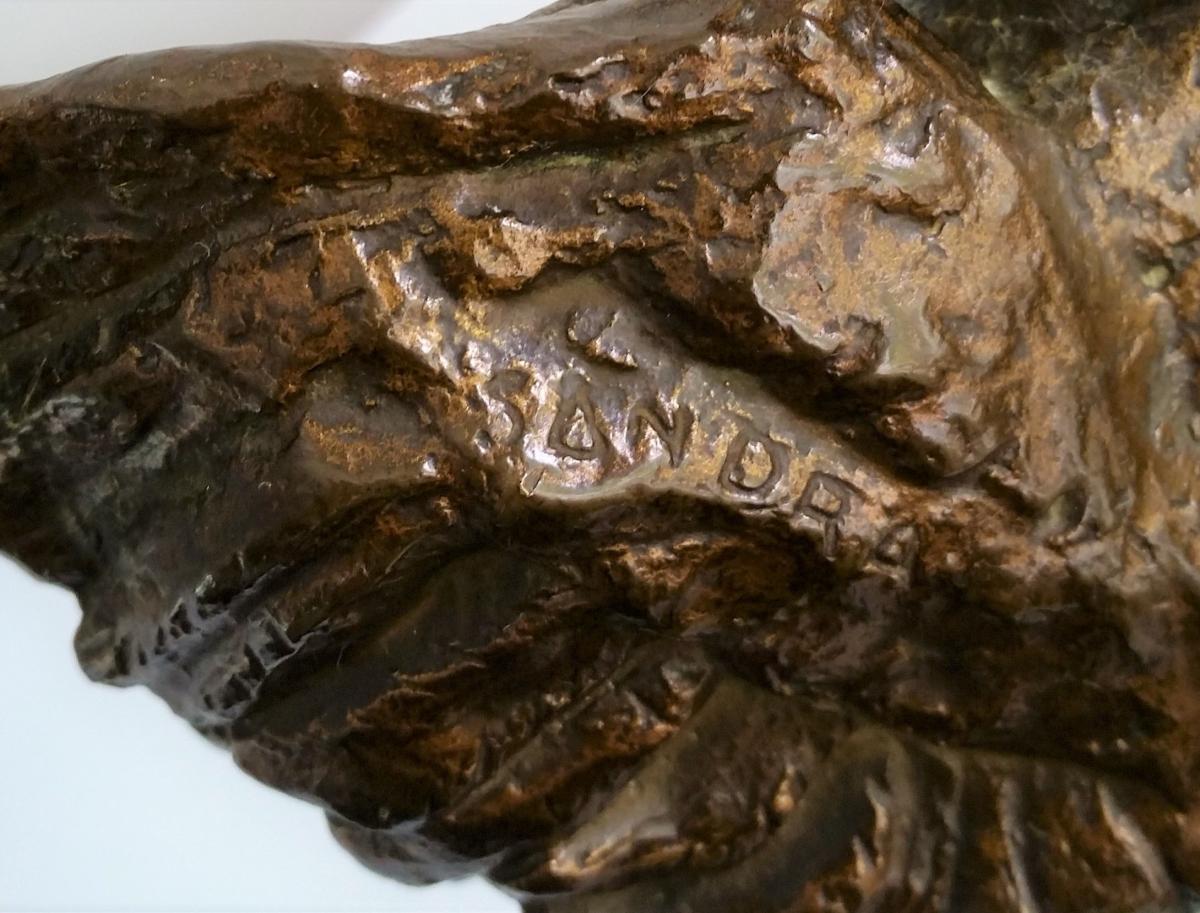 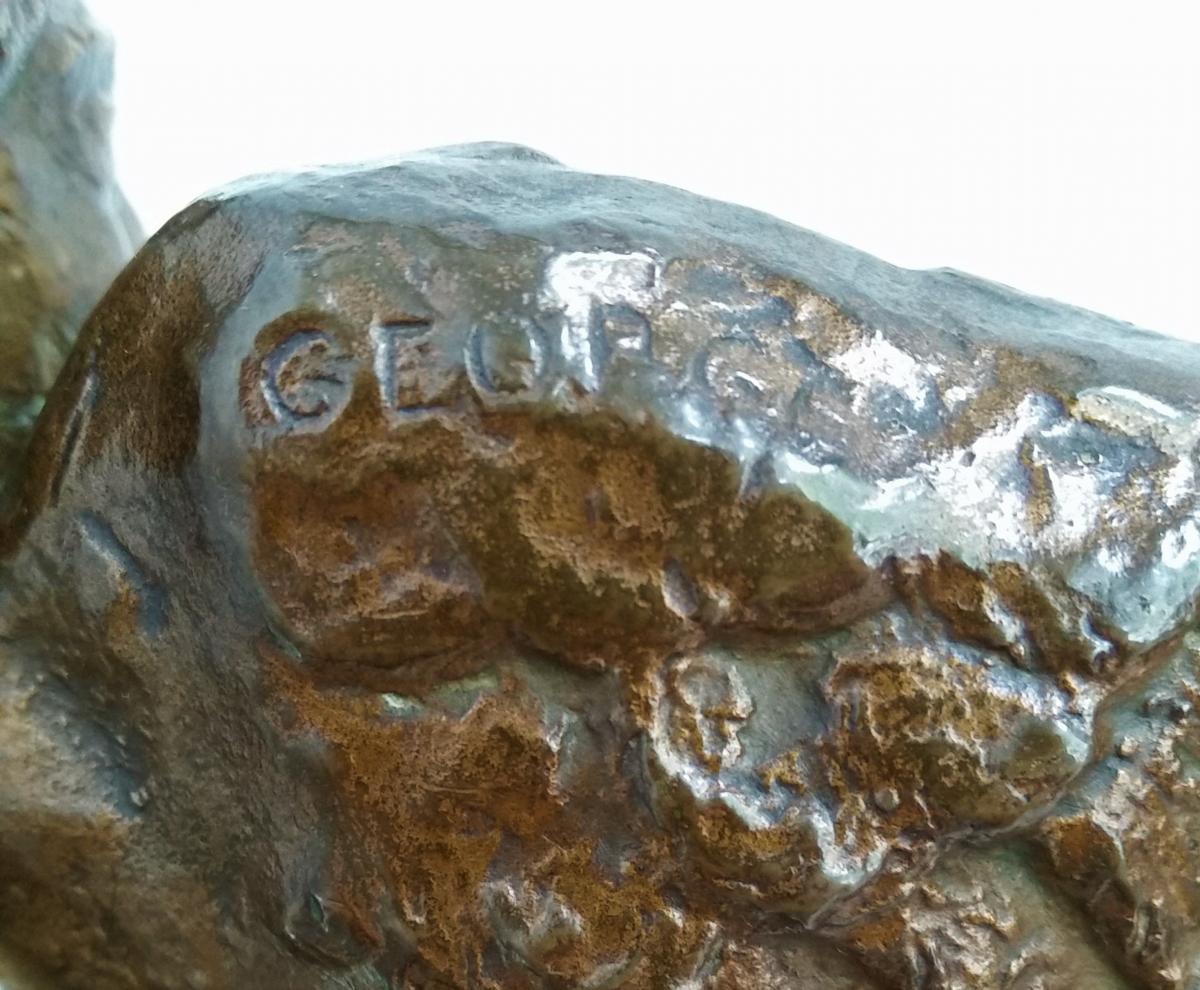 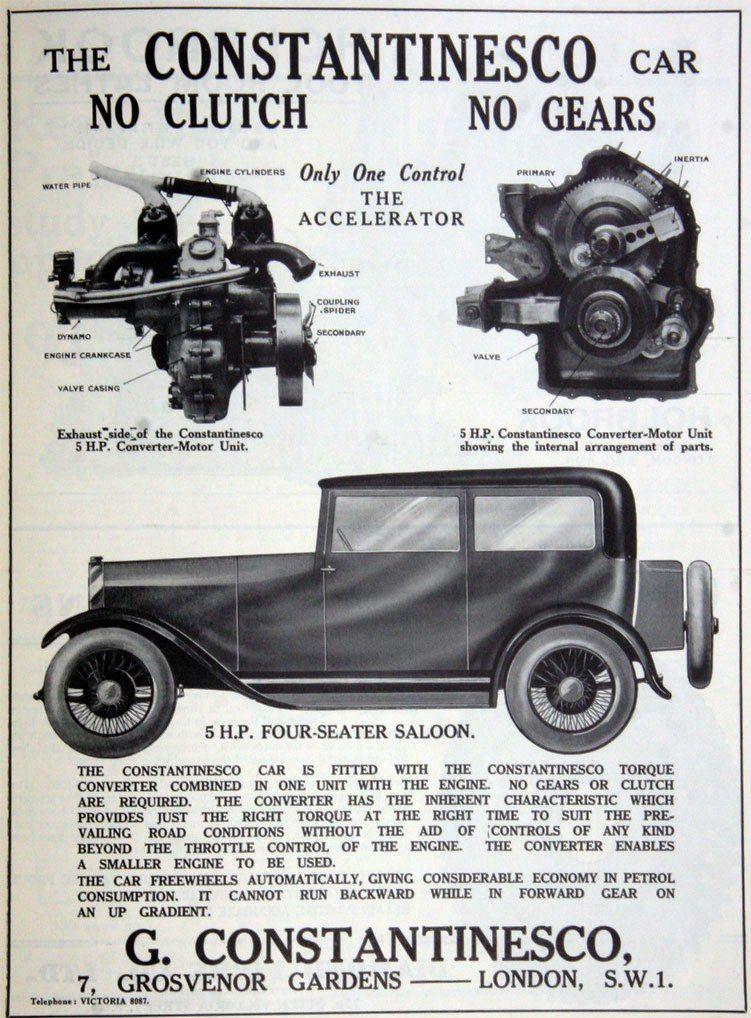 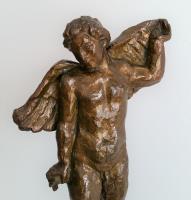 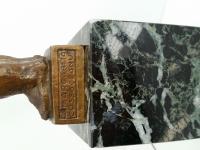 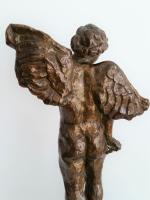 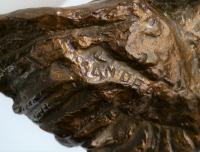 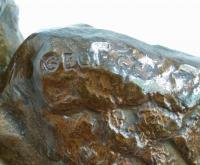 The names George and Sandra are incised on the reverse of each wing, the first names of her uncle and his wife (Alesandra), the subject and the names suggest possibly a 10th wedding anniversary present.

Margareta's uncle was the famous mathematician and inventor George Constantinescu. Based in Britain he is credited for over 130 inventions, including the synchronisation of machine guns to fire through propeller blades in WW1.   In 1926 he launched a  new car without gears, made in England, 'The Constaninesco' , now all but forgotten, a footnote in motoring history.  It was launched in Paris in 1926,  Margareta designed its radiator mascot (Walkyire, 1923),  to prove that it was simple to drive he demonstrated the car on the streets of Paris with his 8 year old son, Ian and the sculptor Bourdelle (who did not drive) both taking the car for a spin. Sadly the car did not take off and none were put into production.

Margaret Cossaceanu, initally studied sculpture between 1910 to 1913 at the School of Fine Arts, Bucharerst.  In 1921, she obtained a scholarship enabling her to go to Rome to pursue her studies at the Academy of Fine Arts It was during this stay in the Rome that she met French engraver-medallist André Lavrillier,,he took her to Paris, where she was introduced to the sculptor Antoine Bourdelle.

After being awarded the Grand Prize at the Academy of Fine Arts in 1922, she left Rome to settle in Paris, where she worked in the studio of her compatriot Constantin Brancusi whilst continuing her studies at the Académie de la Grande Chaumière.  Bourdelle took her on as an  assistant and collaborator in his studio where she was given the responsibility to recreate large scale versions of some of his works, for example, his Sapho.  In Bourdelle's studio, she met Germaine Richier and Alberto Giacometti. She continued to work with Bourdelle  until his death in 1929.

In 1929, she married the engraver and fellow artist, André Lavrillier,.

She participated in various Salons and exhibitions, such as the Salon d'Automne or the Salon des Tuileries and produced pieces for the French state.

In 1952, Bernheim-Jeune Gallery organised a retrospective exhibition of her work, and the Museum of Modern Art, Paris acquired The great torso of Woman.

In 1970, for the fortieth anniversary of his death she created a portrait bust of Antoine Bourdelle from memory.

In 1993, the GalerieVallois in Paris organised a retrospective show of her work. 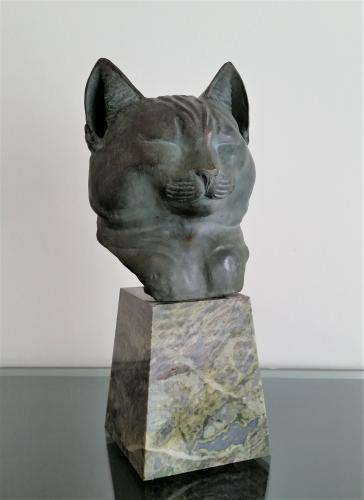 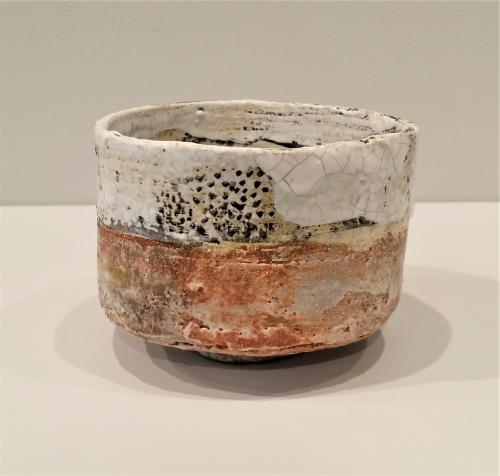 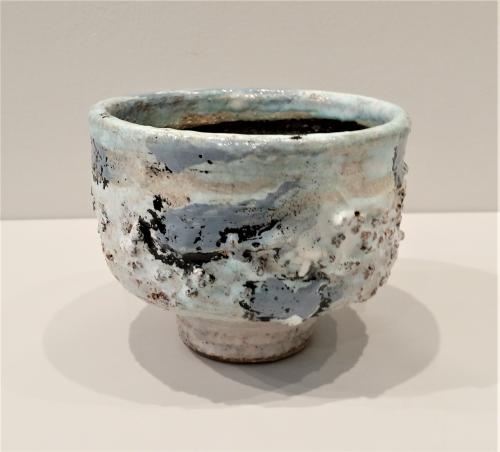