A majestic sea chart from the Dutch "Golden Age" 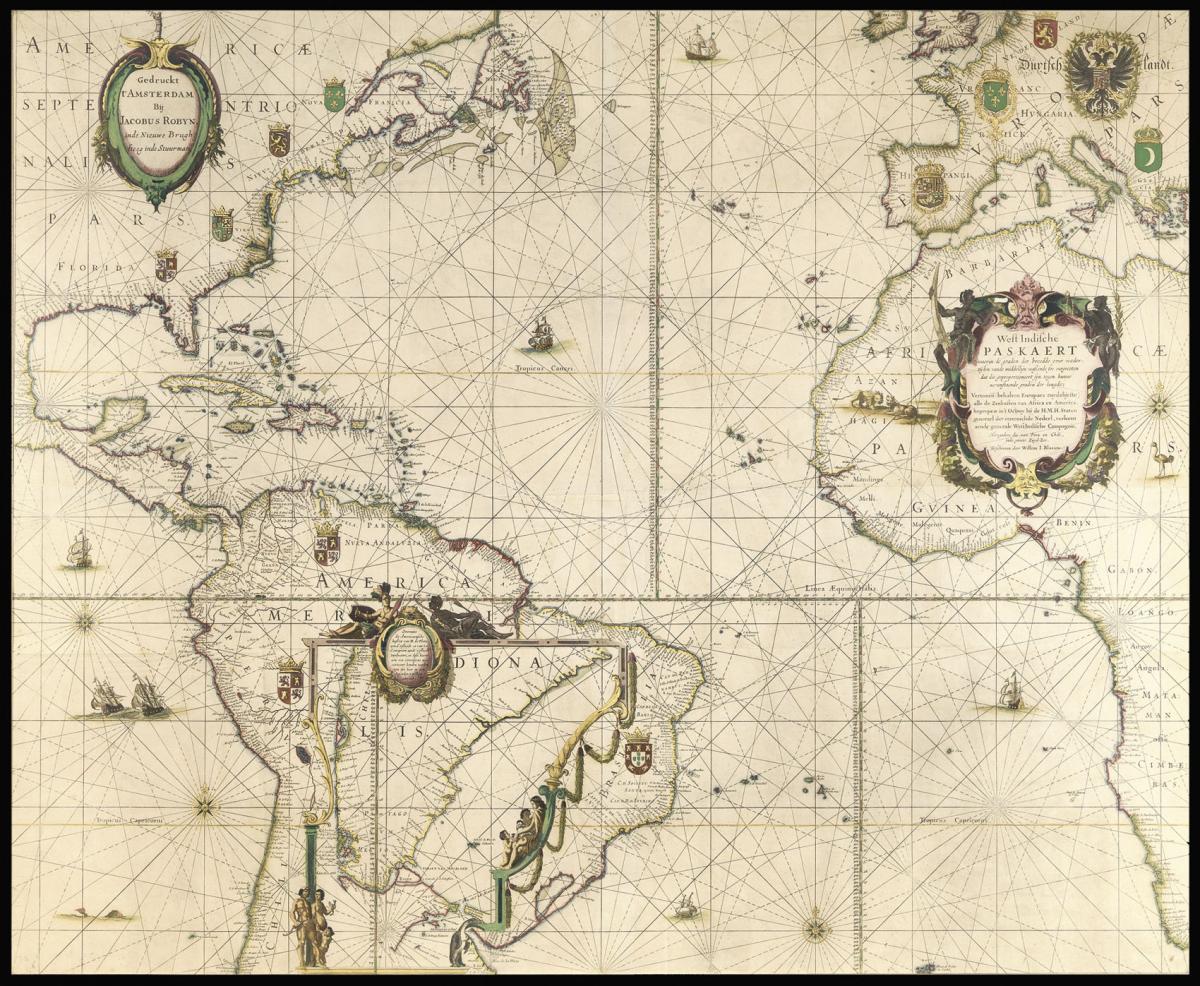 The very rare second state (of four) of one of the most important charts published in the seventeenth century, one of the earliest on Mercator's projection, and the first on the projection for North America.

Waters: the "earliest printed chart of the Atlantic … became immediately the standard chart for navigation to America and the Cape of Good Hope."

Campbell says that only "a few examples at most" of each state have survived. The title indicates that the Paskaert was designed to show the area chartered to the West India Company in 1621. Destombes and Gernez suggest that the lack of a privilege on the first state indicates that it was used exclusively by the company and not available to the general public.

Robijn must have acquired the plate "at one of the sales of Blaeu's stock in 1674 … He must have disposed of the plate fairly quickly as the next state is by Pieter Goos who died in March 1675." This brief period of ownership would explain the great rarity of this second state.

The examples located by Schilder and Burden are printed on vellum. No census of examples on paper has been compiled. The paper examples are also quite rare, and those that survive were included in luxurious composite atlases. An example of the Robijn state on paper in a private Dutch collection is reproduced in Putnam, 'Early Sea Charts' (plate 27).

Destombes and Gomez praised the West Indische Paskaert as "an extremely interesting chart because it is one of the earliest engraved and printed to include latitude… this scientific and artistic document of the first order marks an important date in the history of nautical cartography and is one of the most important contributions that the Lowlands produced in the XVII century."

The West Indische Paskaerte's importance extends far beyond its early use of Mercator's Projection. It appears to be the work of Hessel Gerritsz, "the chief Dutch cartographer of the XVIIth century" (Keuning, 'Hessel Gerritsz').

Gerritsz was the official cartographer to both the Dutch East and Dutch West India Companies, and before his death in 1632, he constructed a number of well-known maps and charts for Willem Blaeu; the most important must have been this chart for Atlantic navigation. Based upon the date on the title-page of the now-lost accompanying sailing directions, Günter Schilder and others believe the Paskaert was published in 1630, which was a pivotal year in Dutch cartographic history.

The Paskaert is contemporary with Johannes De Laet's 'Nieuwe Wereldt' (eds. of 1625 and 1630), which contained a suite of 14 regional maps of America by Gerritsz. These maps introduced what Zandvliet calls a "new map image" for America, which was soon duplicated in the regional maps that Gerritz prepared for the great atlases of Blaeu and Jansson.

Campbell points out that the Paskaert "betrays knowledge" of the maps added to De Laet. The West Indische Paskaert combines Gerritsz's "new map image" of the regional maps into one great general chart.