A Louis XVI Style Marquetry Commode after a model by Jean-Henri Riesener, by François Linke 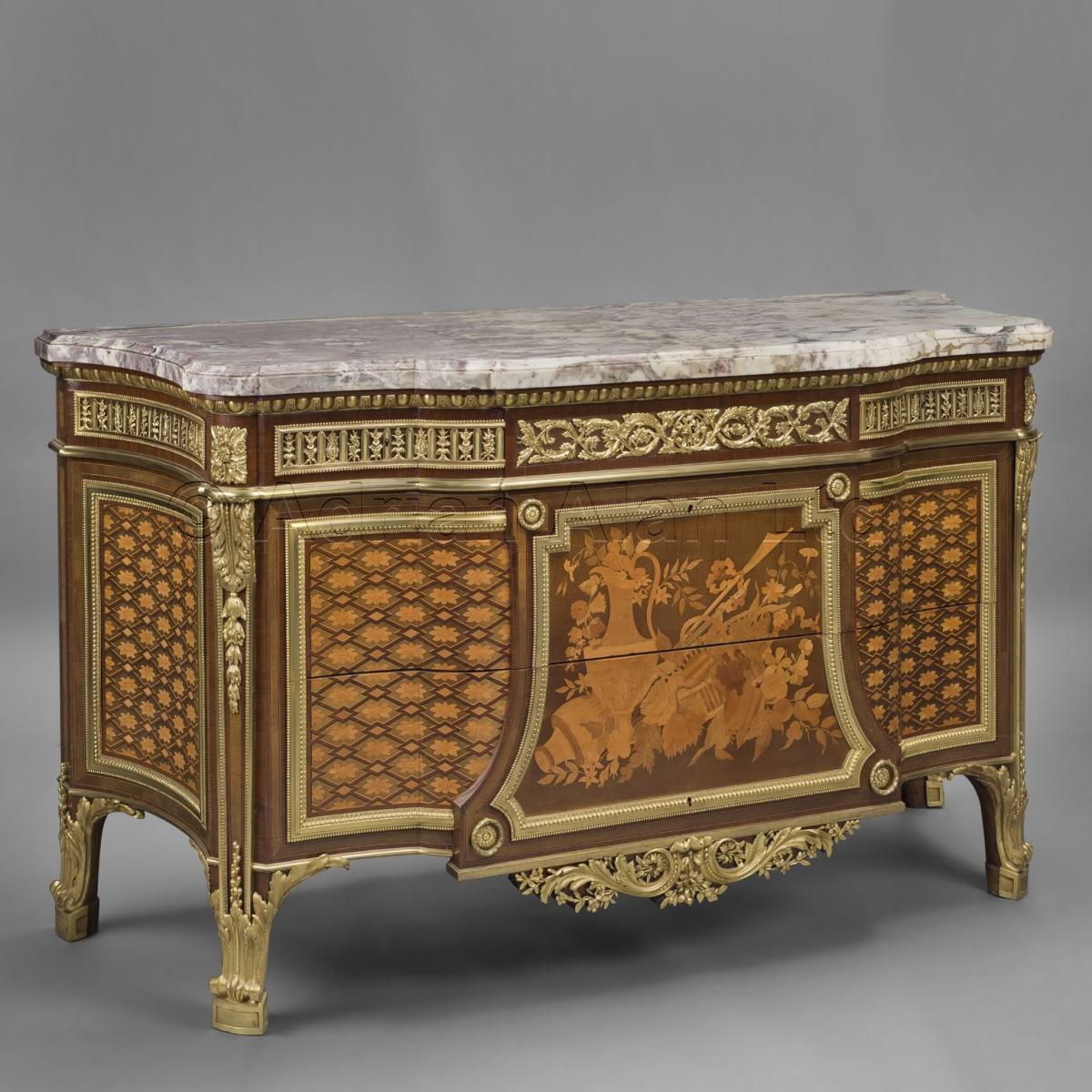 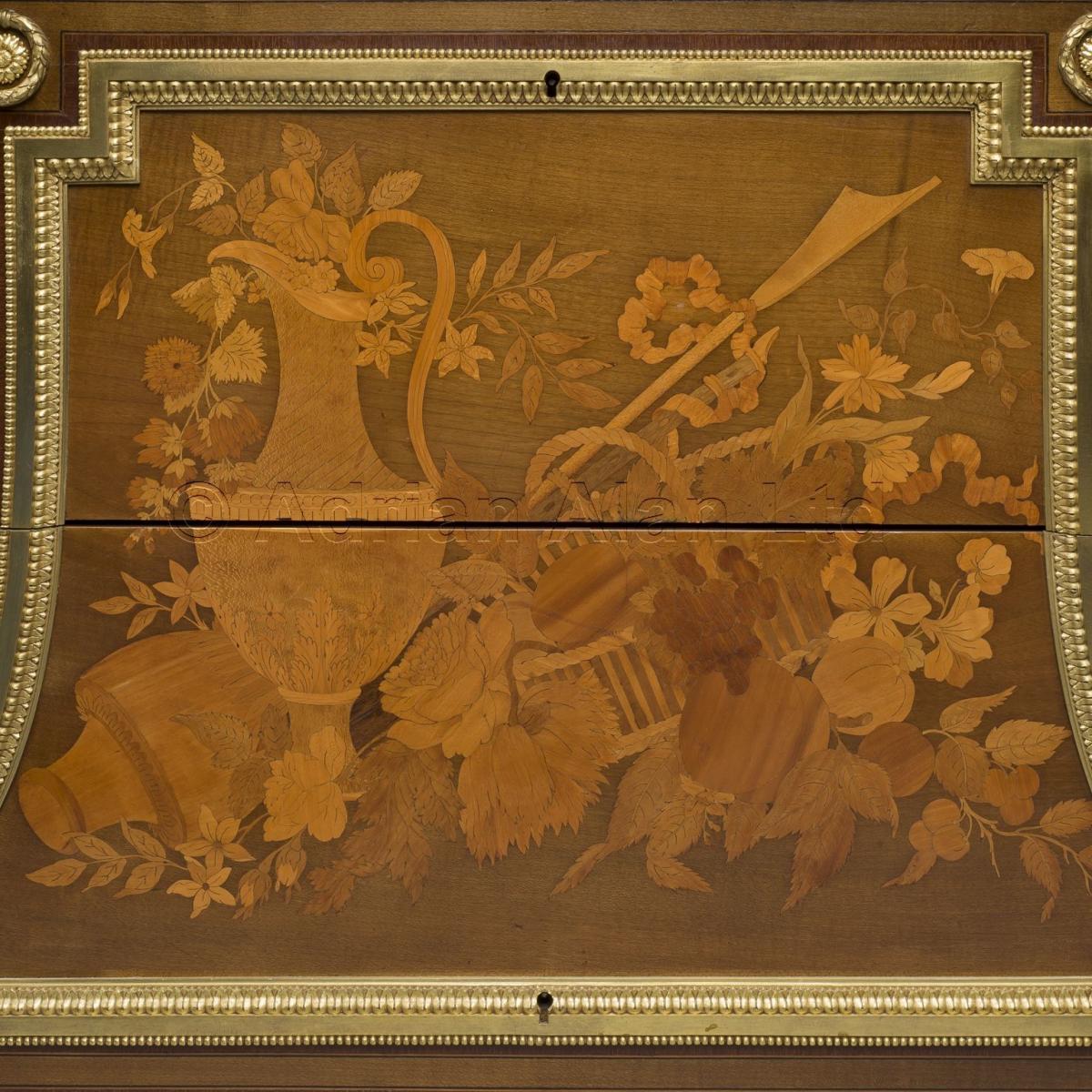 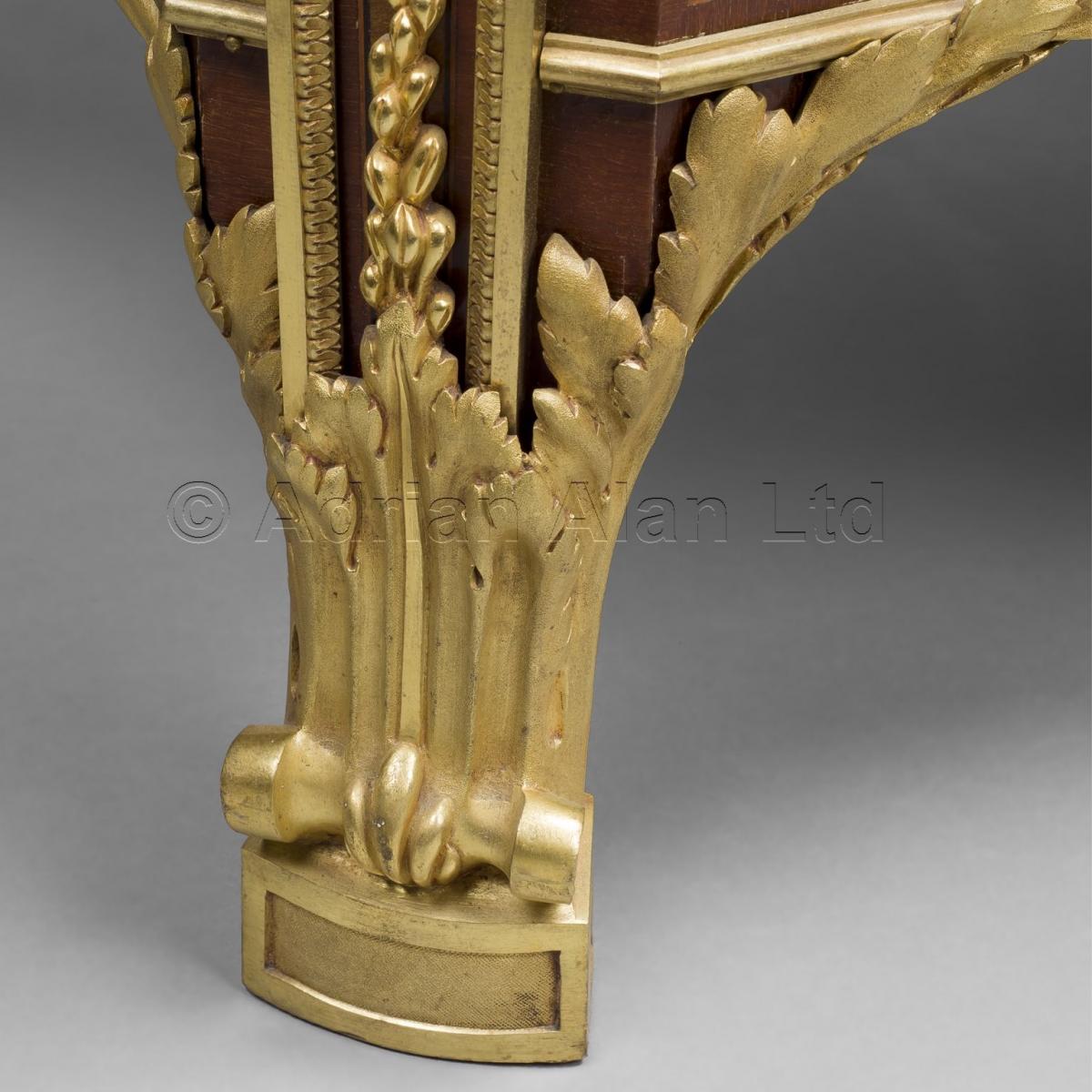 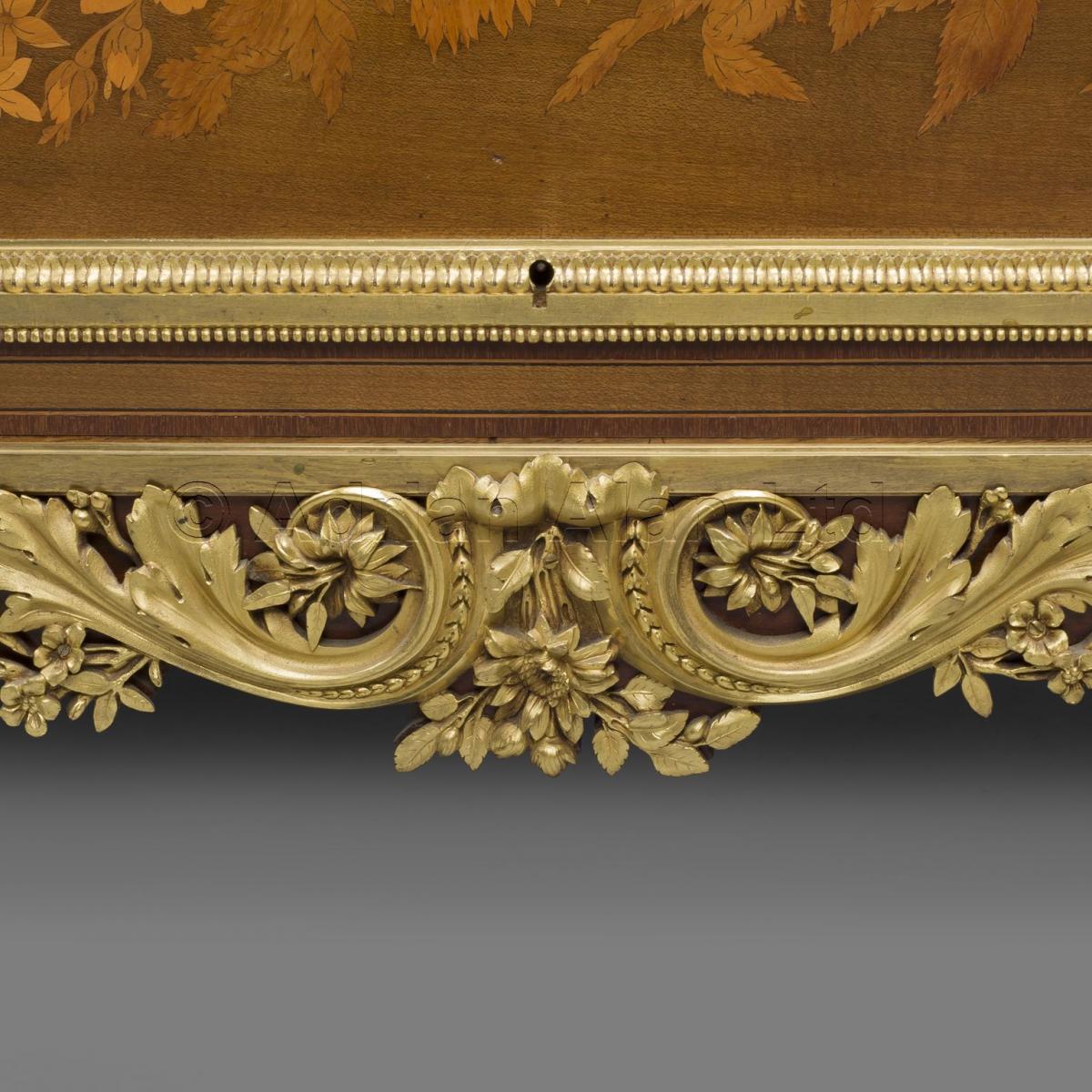 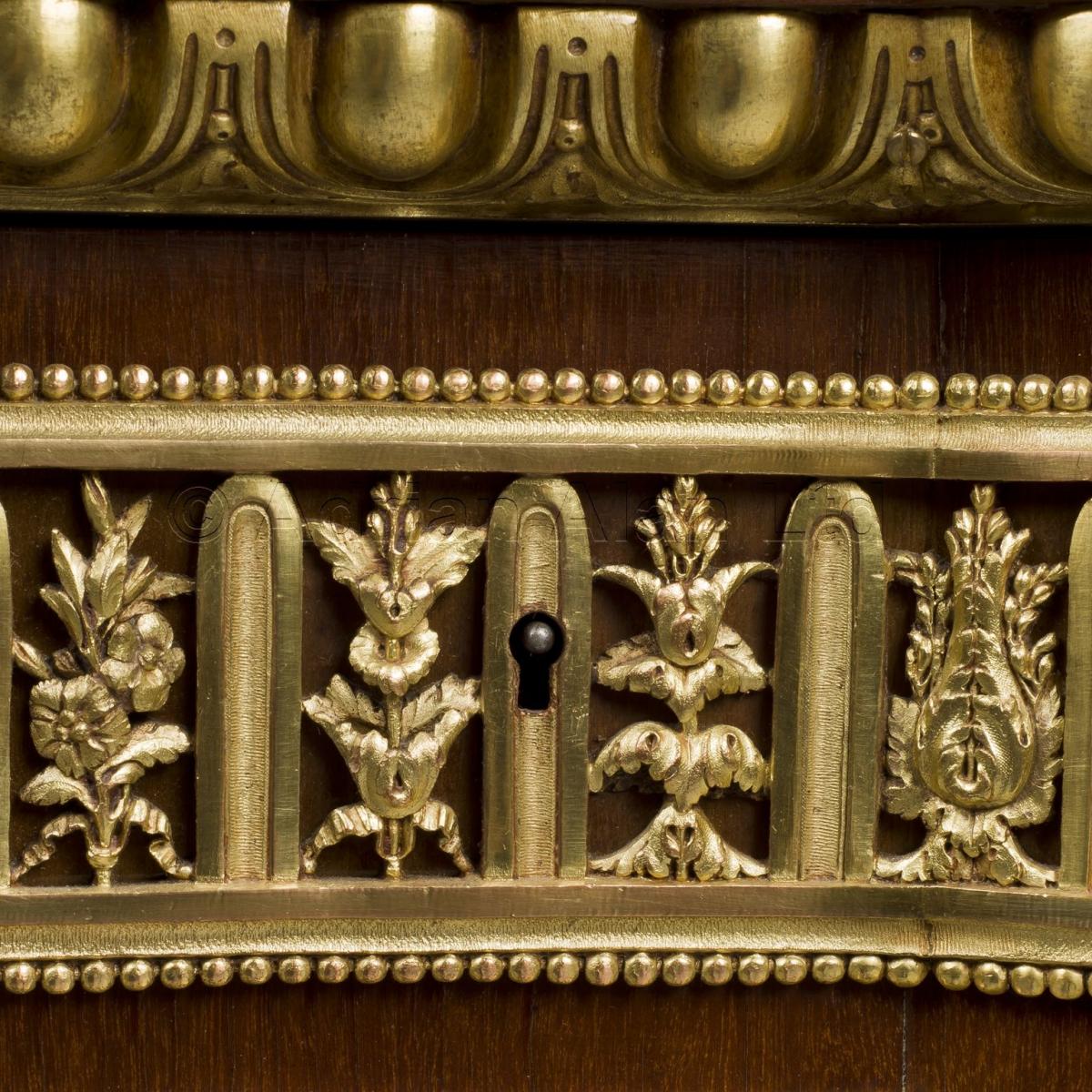 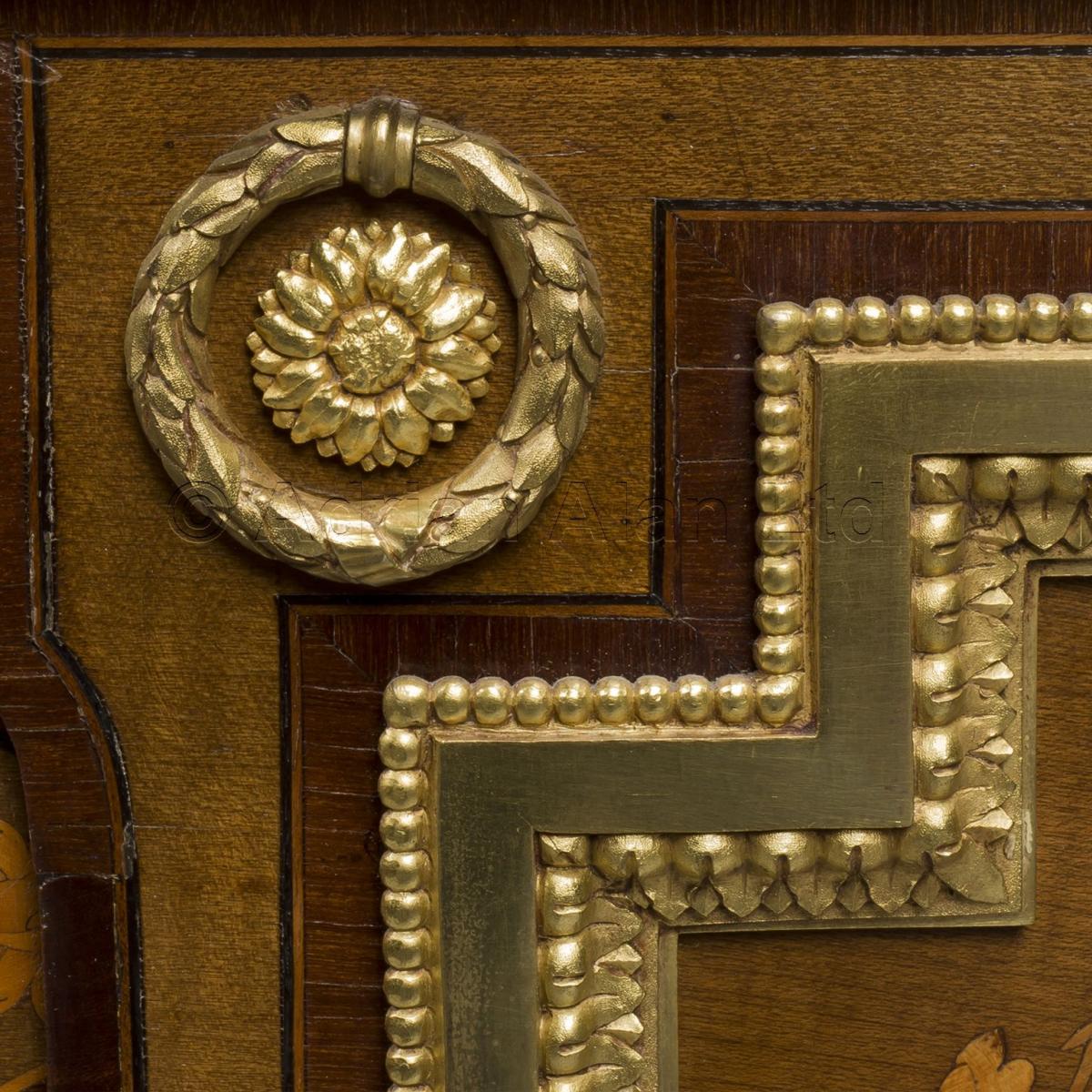 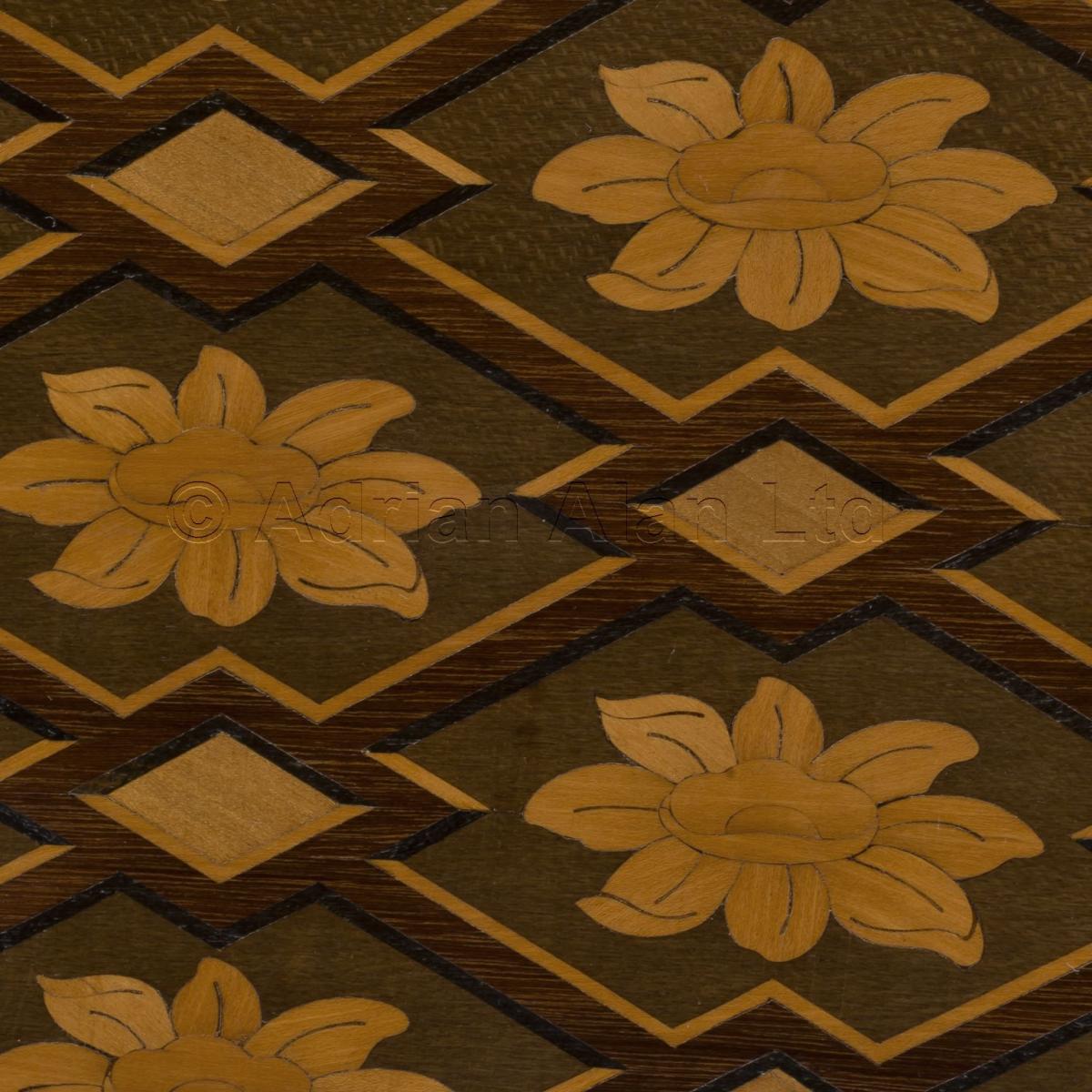 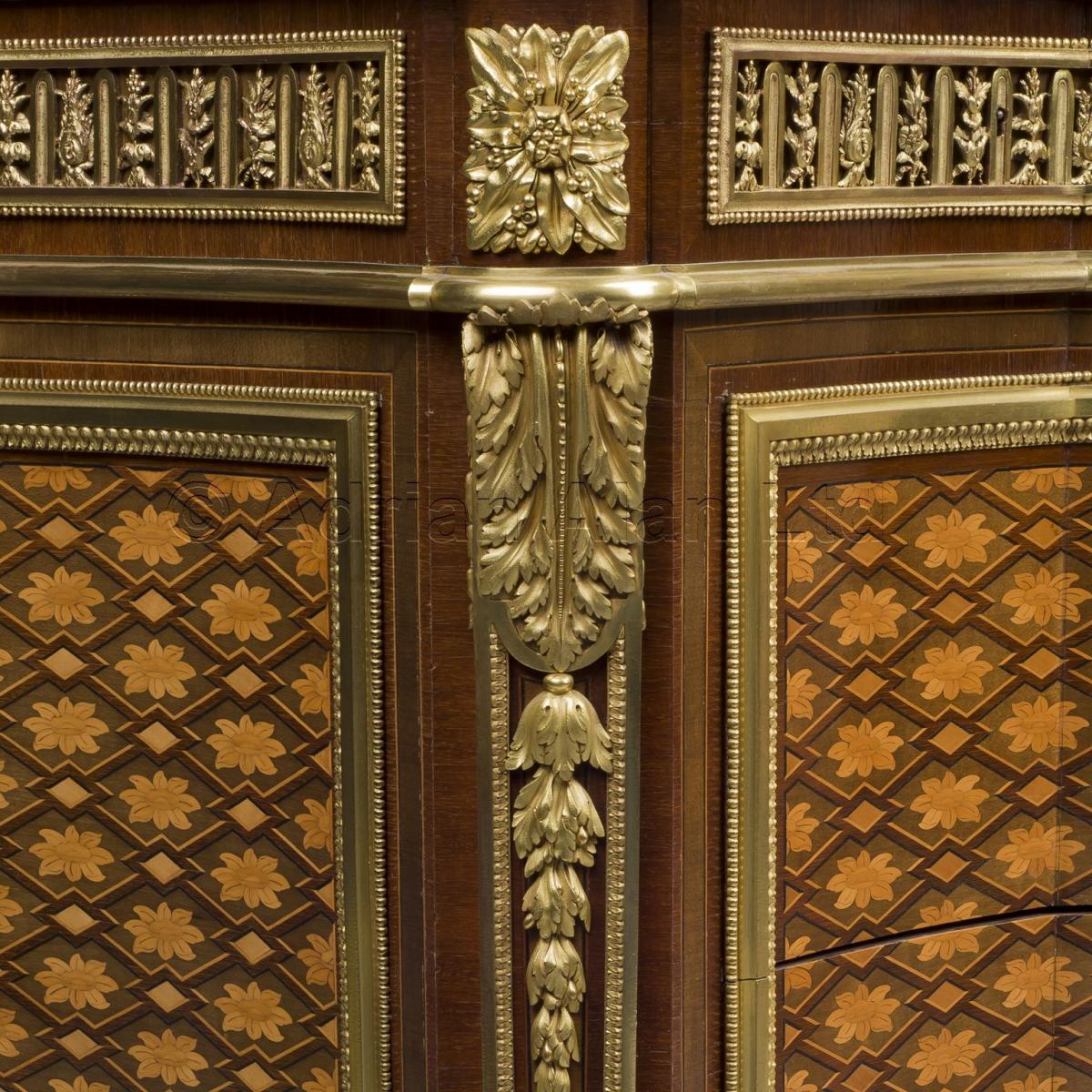 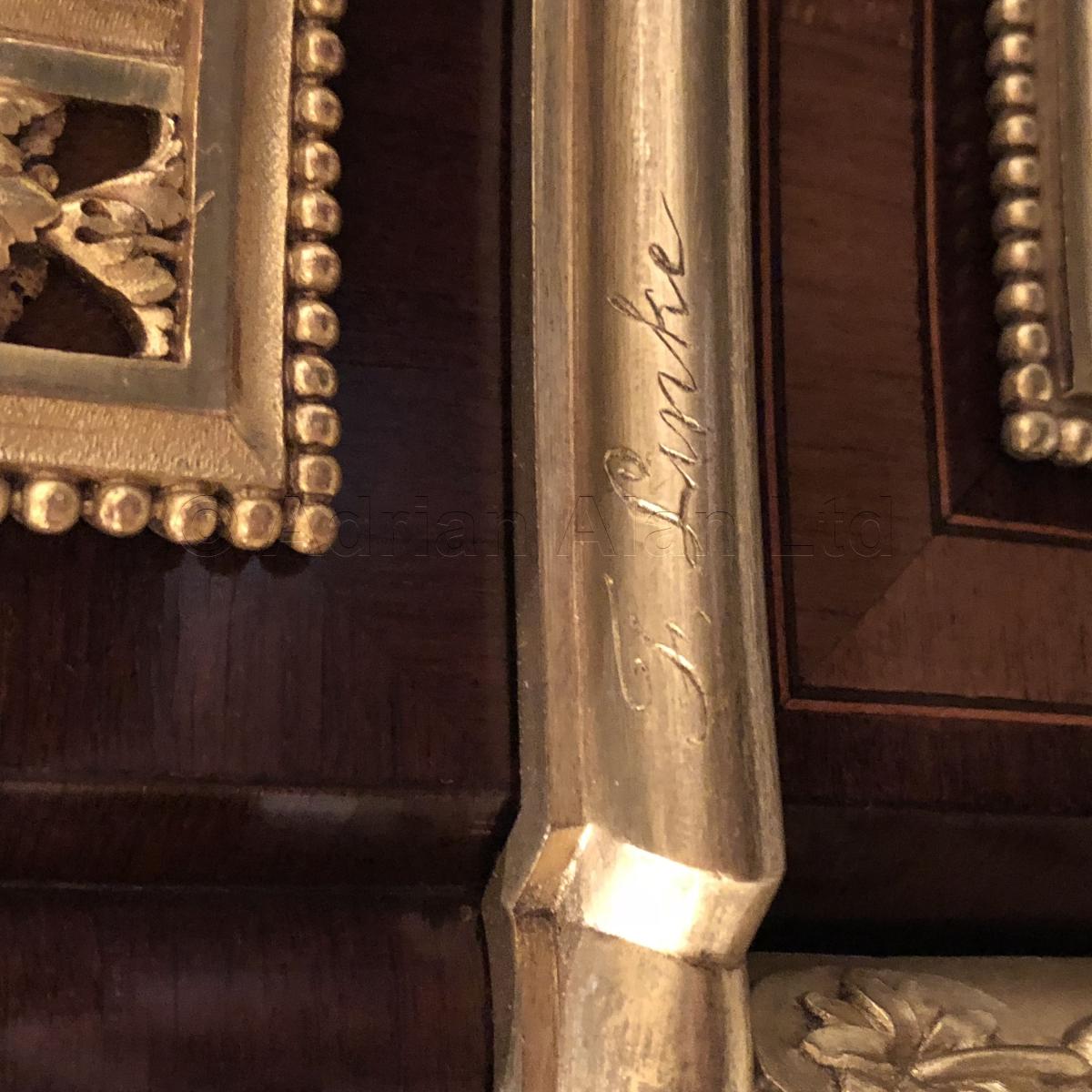 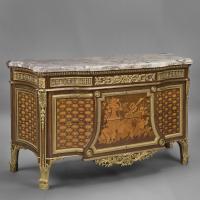 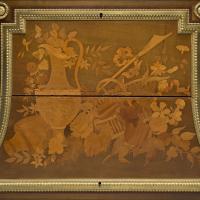 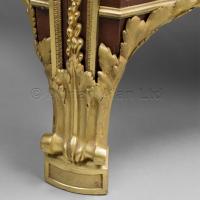 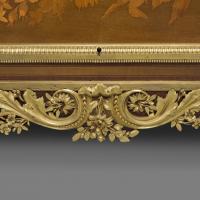 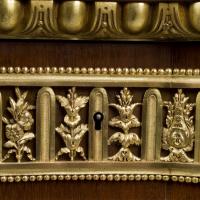 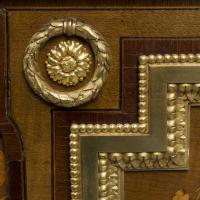 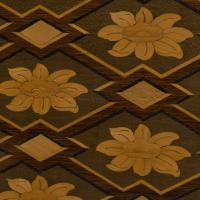 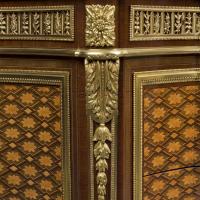 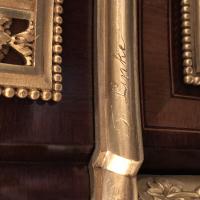 Signed 'F. Linke' and the lock-plate stamped 'CT LINKE SERRURERIE/PARIS'.  Stamped variously to the reverse of the bronze mounts 'FL'.

This fine mahogany commode has a fleur de pêcher marble top above a breakfront frieze set with three drawers, over a pair of drawers  with a unified central panel of floral marquetry and trophies within a gilt-bronze frame, flanked by panels of foliate parquetry.  The apron is mounted with finely cast acanthus and the scroll-mounted legs put down on block feet.

The origin of the design is derived from the cabinet work of the renowned eighteenth century ébéniste du Roi, Jean-Henri Riesener, who was responsible for many important contributions to the formation of the Louis XVI style in France. The distinctive repetition of stylised rosette and interlaced lattice work marquetry on the present example, punctuated by fine floral marquetry panels and gilt-bronze mounts is redolent of some of the most celebrated examples of his oeuvre.

This commode can be related to two notable commodes namely one made for the bedchamber at Versailles of the Comtesse de Provence, latterly in the music room at Hamilton Palace and now at Waddesdon Manor. Another commode providing direct comparison was the example made for Marie-Antoinette in the 1780's, and also formerly in the collection of the Duke of Hamilton at Hamilton Palace,  now in the Frick Collection.

Riesener when describing the identical stylised rosette and interlaced lattice work, as appears on this commode, used on the desk for the Comte d'Orsay, talks of 'mosaic' marquetry in the taste of 'Boulle'.  This marquetry equivalent of the inlaid brass and tortoiseshell work of André-Charles Boulle is derived from almost identical patterns used by Boulle on items such as the impressive Four Continents Clock now in the Wallace Collection.  Yet this geometrical device and indeed many other Boulle patterns of the time can be related to Japanese and Chinese lacquer work.  For instance the designs employed on the Four Continents Clock are virtually identical to that employed on a lacquer cabinet, now in the Wallace Collection, that was produced for the European Market in Kyoto in around 1680.  As time progressed the taste for the oriental became more generalised and interpretations became looser and less dependent on specific original sources.

He was born in 1855 in the small village of Pankraz, in what is now the Czech Republic.  Records show that Linke served an apprenticeship with the master cabinetmaker Neumann, then in 1875 at the age of 20 he arrived in Paris where he lived until he died in 1946.
Literature:

Pradère, Alexandre. French Furniture Makers: The Art of the Ebeniste from Louis XVI to the Revolution, Oxford University Press; pages 371 - 388.