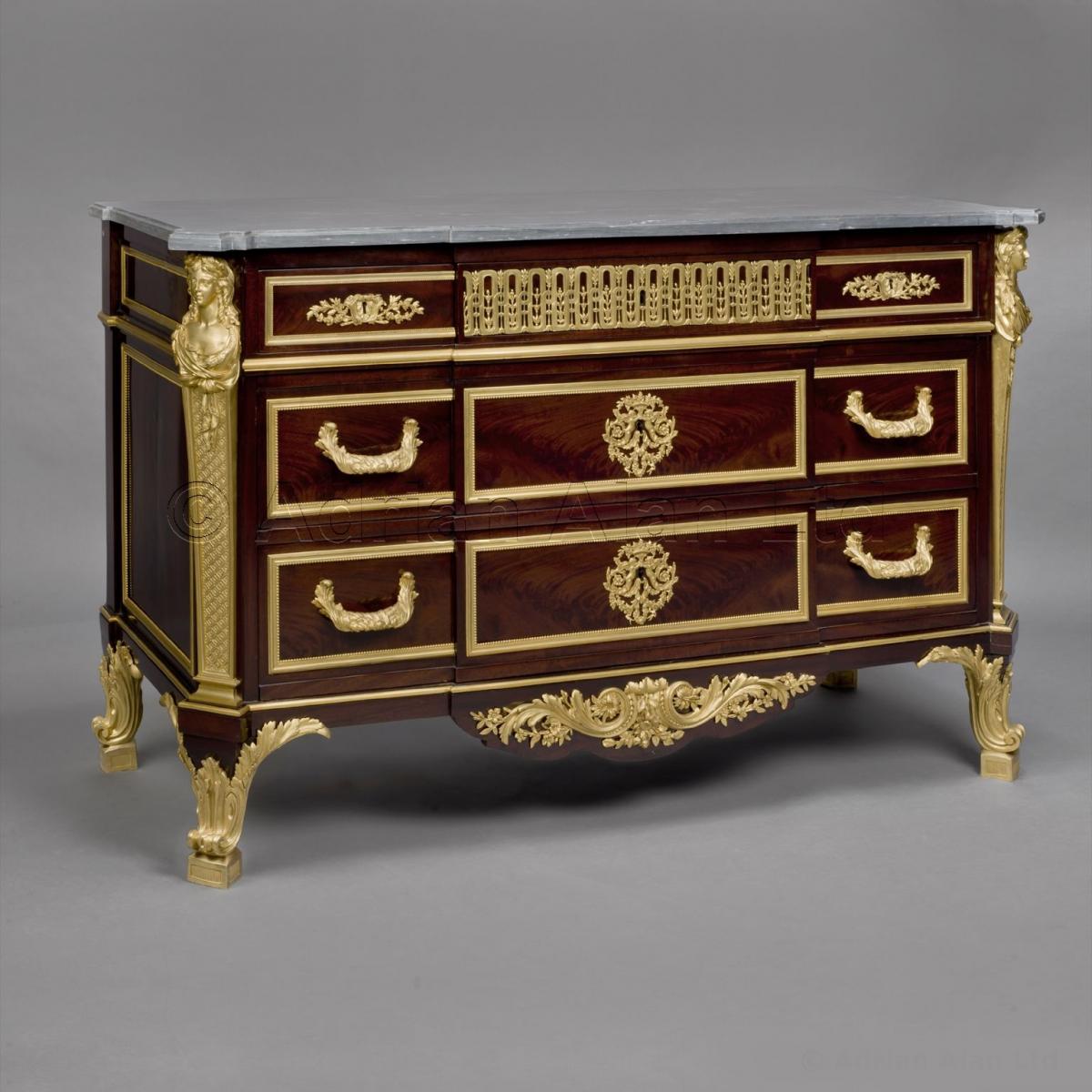 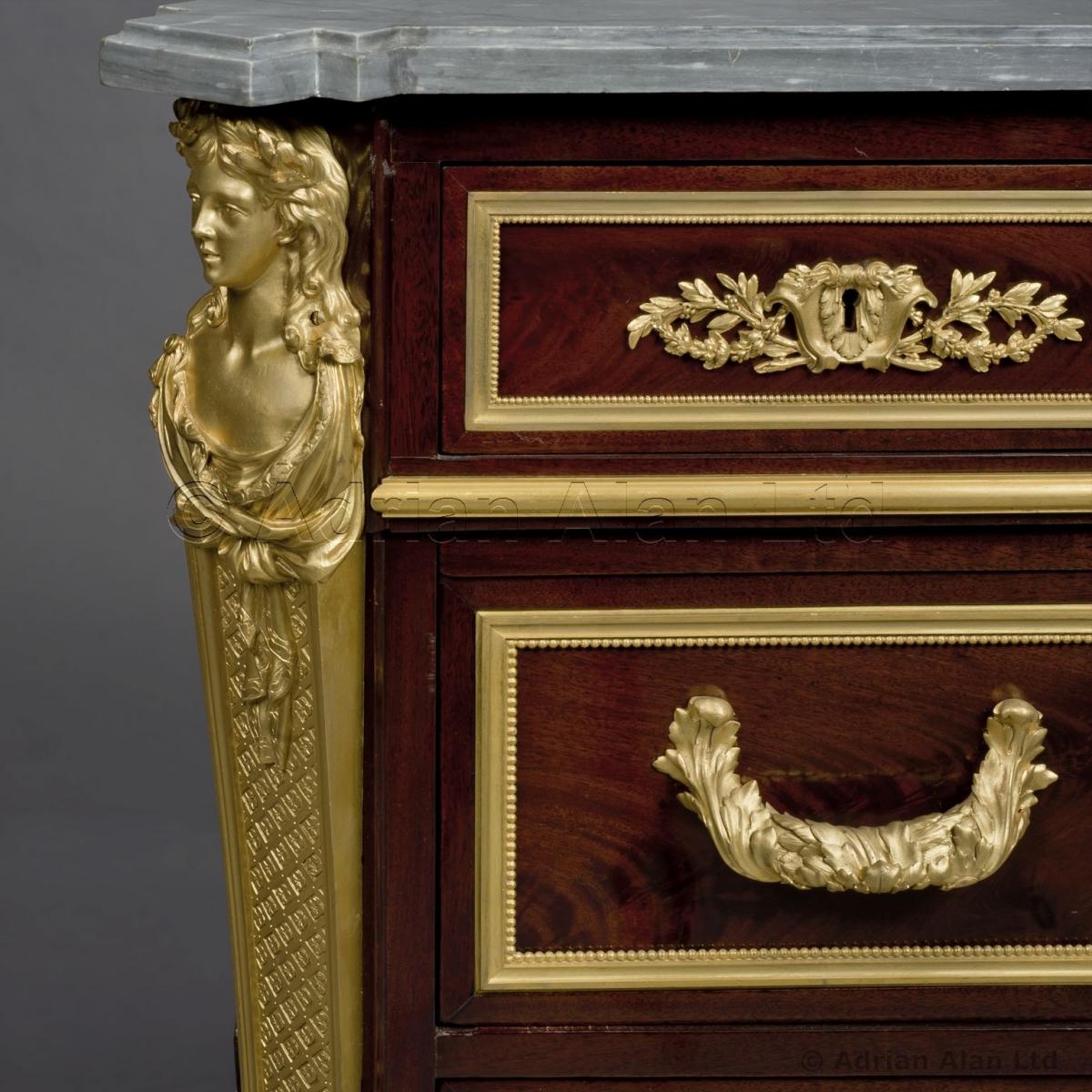 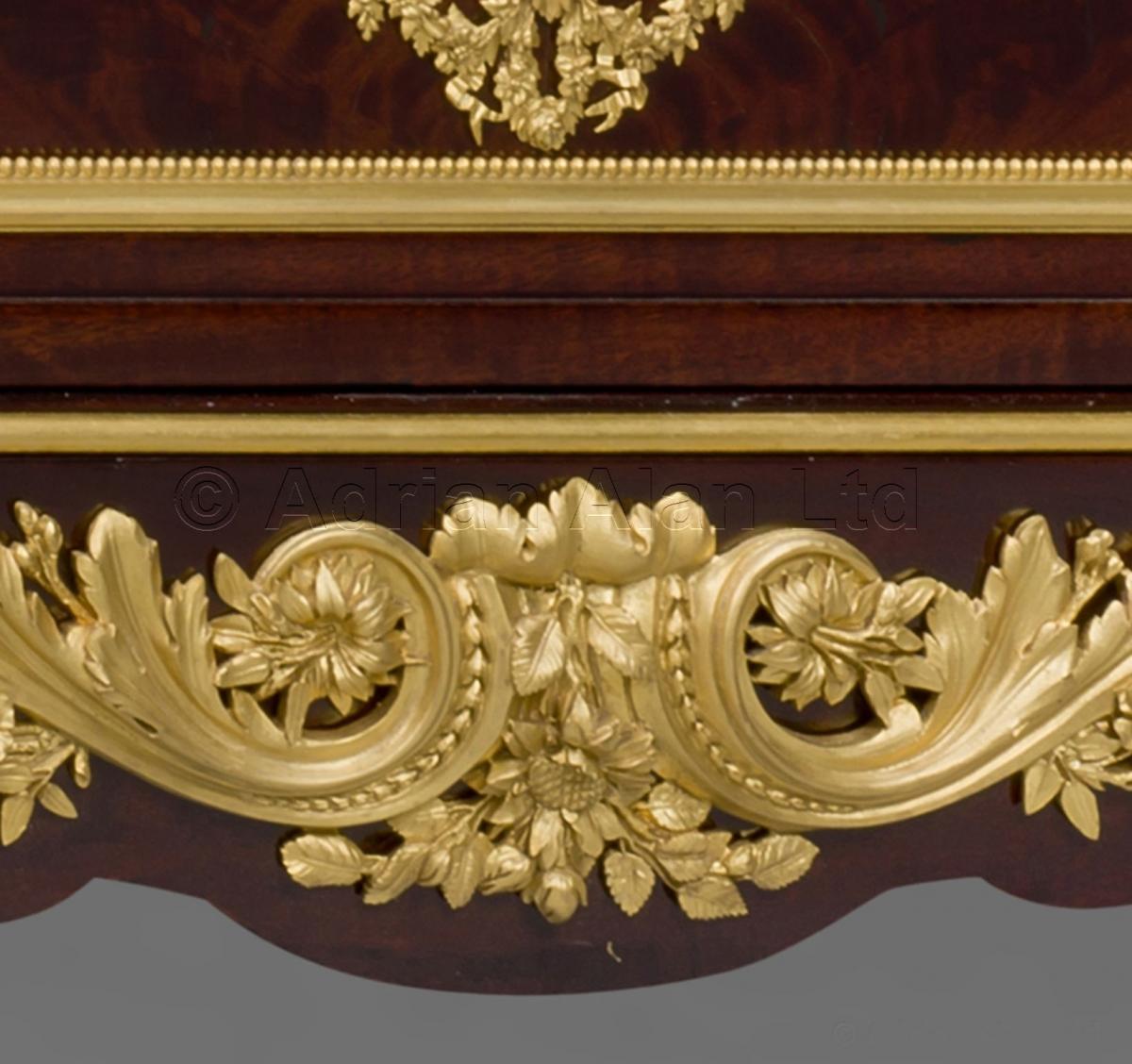 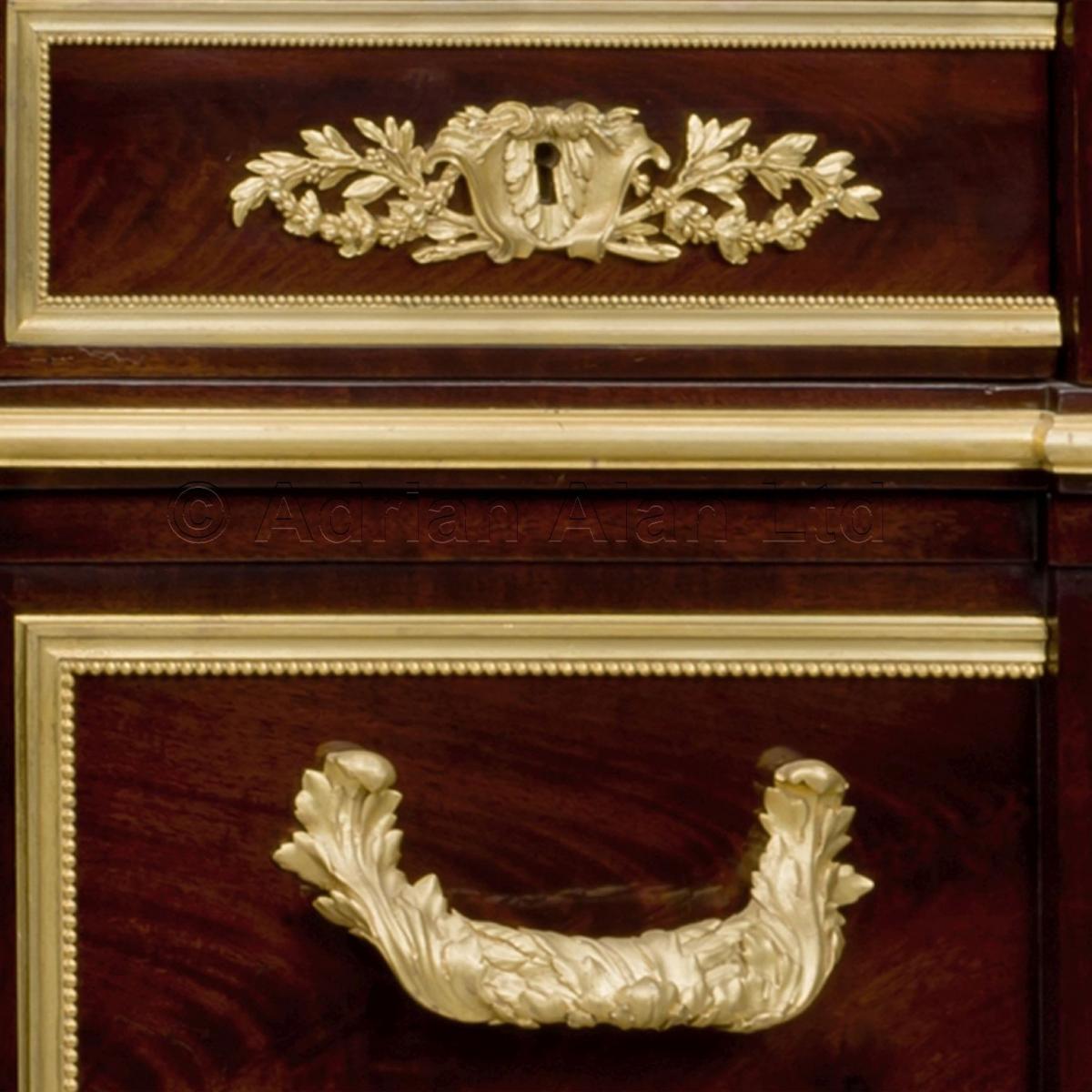 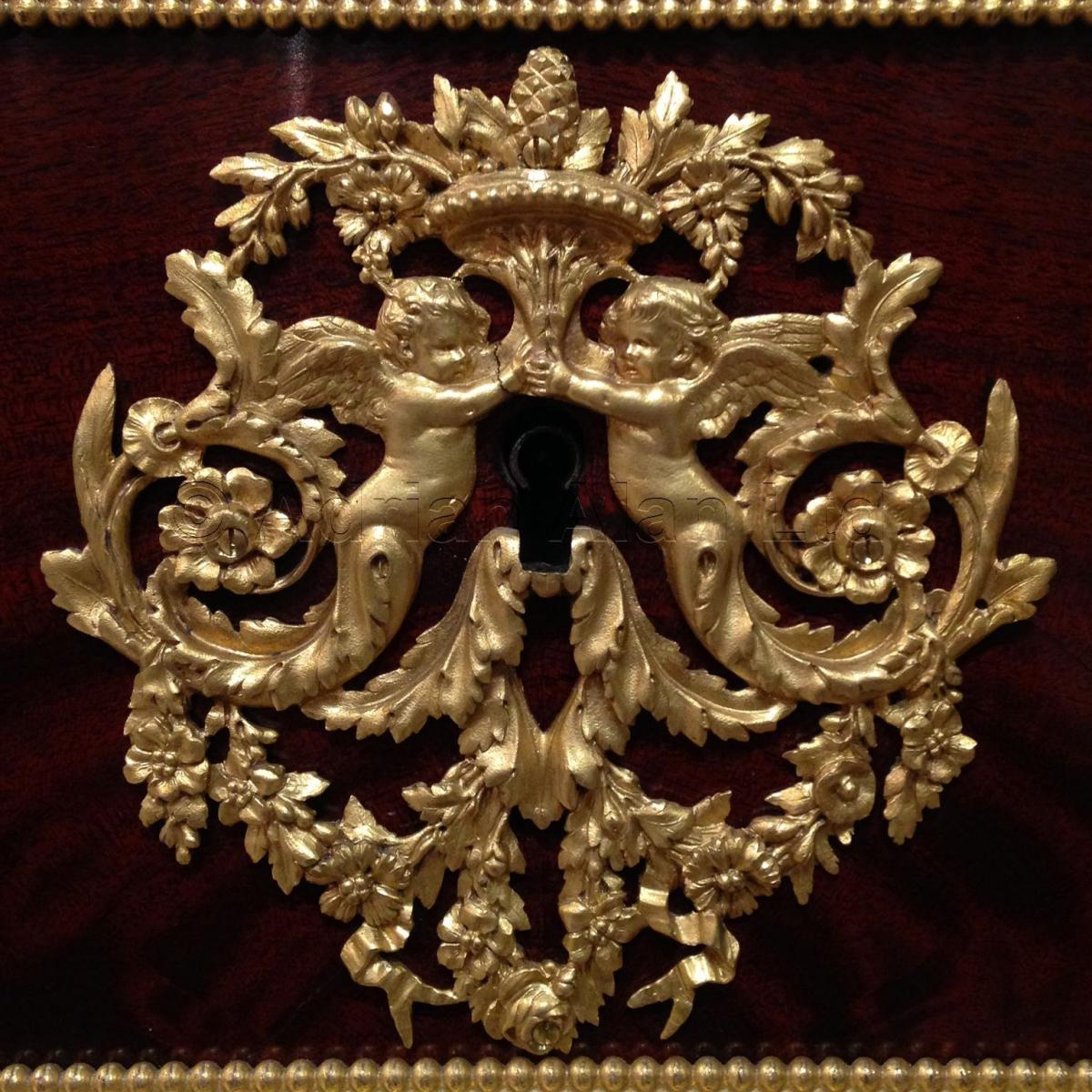 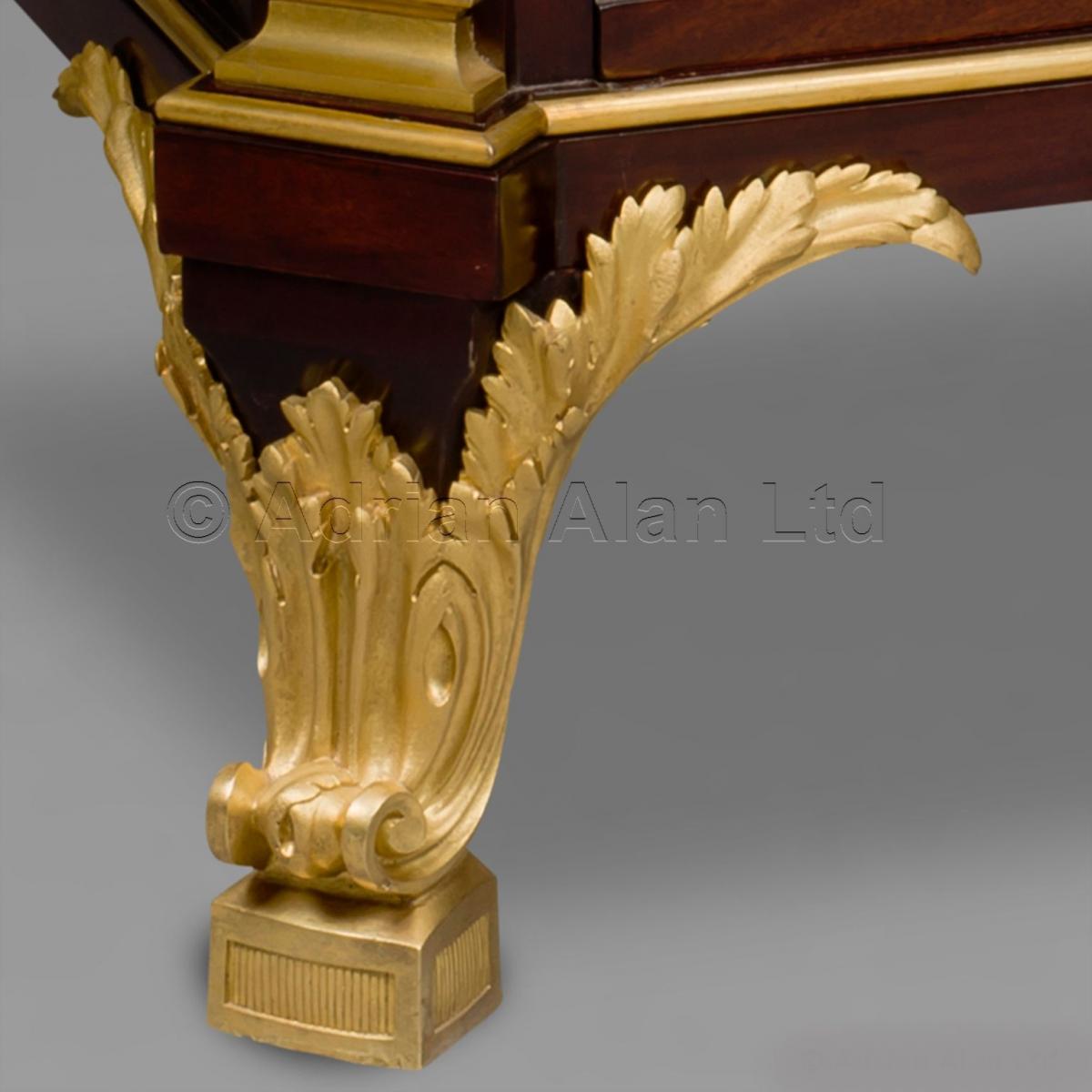 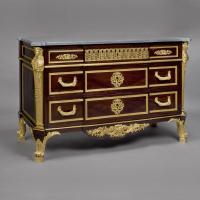 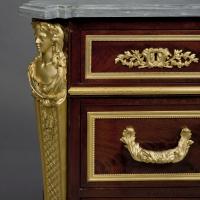 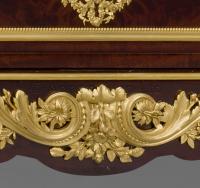 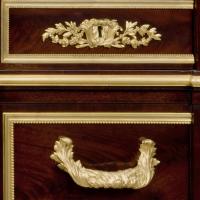 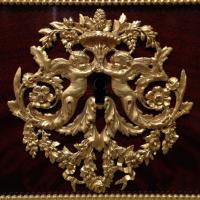 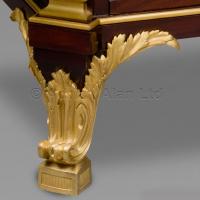 This fine, gilt-bronze mounted, mahogany veneered commode is of restrained neoclassical design in the manner of the important ébéniste du roi, Jean-Henri Riesener.

The commode is of rectilinear form and has a shallow breakfront blue turquin marble top with canted corners, above a fluted husk-filled frieze, flanked by two small drawers.  Below are two long drawers with elaborate, foliate and cherub cast escutcheons, acanthus handles, and a shaped apron centred by a fine scrolling and fronded acanthus mount.  The angles are headed by finely cast gilt-bronze figural mounts of female herms and the commode raised on scrolling acanthus cast feet.

The highly sculptural gilt-bronze figural mounts to the angles, depicting laurel crowned female herm figures feature on a number of important works by Riesener, including a commode now in the collection of the Hillwood Museum, Washington, DC. and a commode made for Louis XVI’s  Chambre du Roi at Versailles, now in the Royal Collection.

Jean-Henri Riesener (1735-1806) lived in Paris and was the foremost cabinet-maker of his generation and the successor to the court patronage of Jean-Francois Œben, whose widow he married in 1767.

From 1774 to 1784, Riesener supplied more than 938,000 livres worth of furniture to the Garde-Meuble Royal.  He was responsible for many important contributions to the formation of the Louis XVI style in France, of which he was undoubtedly the master.

Riesener began his career for the monarchy with the roll-top desk for Louis XV placed in his inner study. Commissioned in 1760 from his father-in-law and master Œben, it is a piece of furniture exceptional for its novelty, the refinement of its marquetry, the quality of its bronze details and above all the ingeniousness of its mechanism: all the desk closes with a single turn of the key and opens just by pressing a button. Completed in 1769, it was modified by him during the Revolution when he had to remove the royal symbols. The prestige of this piece of furniture was immense and definitively established the reputation of Riesener.

From this time on, there was no shortage of commissions from the court and for ten years he was the principal supplier to the royal residences. But his outrageous prices lost him a part of his clientele which turned to his rival Benneman. Marie-Antoinette, however, remained faithful to him. Riesener produced his most graceful and innovative pieces of furniture for Marie-Antoinette: In particular for her boudoir at Fontainebleau, he produced fragile furniture decorated with mother-of-pearl that was unique in its genre. Pearl was a particularly exotic material at that time and using it to cover the entire surface of an object was the height of luxury.

His furniture was much copied during the nineteenth century, in particular the 'Bureau du Roi' at Versailles, of which a superb version was made for the 4th Marquess of Hertford and is now in the Wallace Collection.