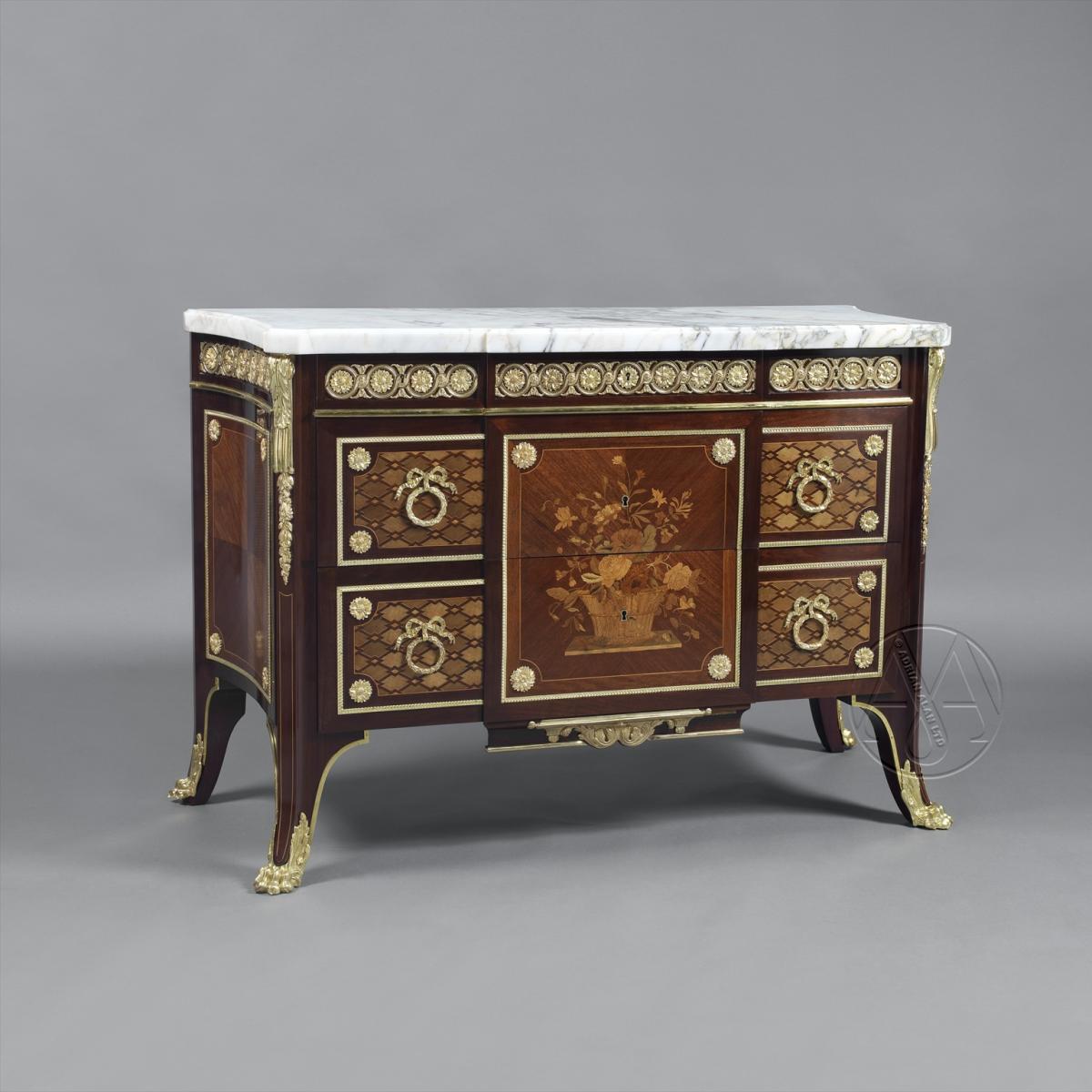 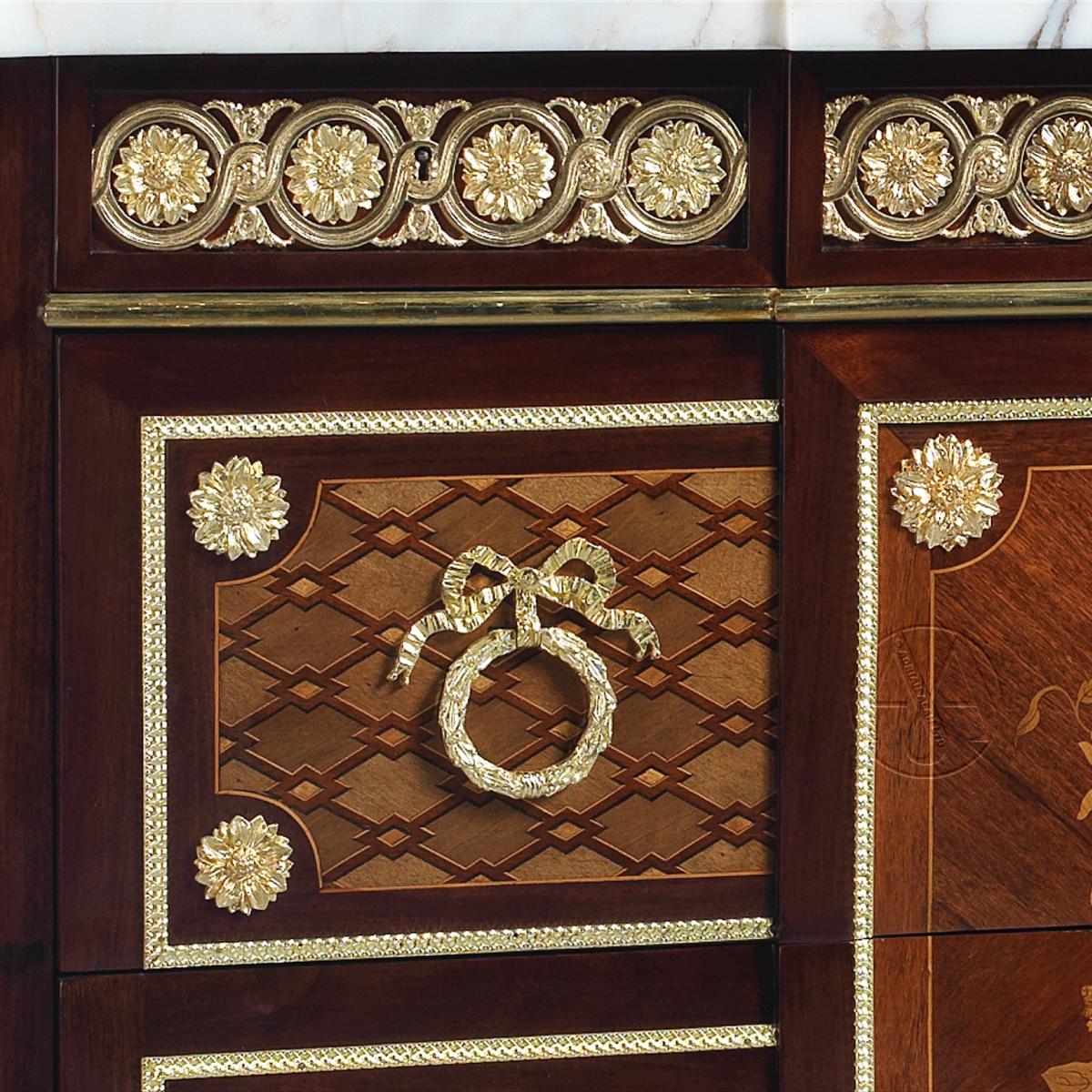 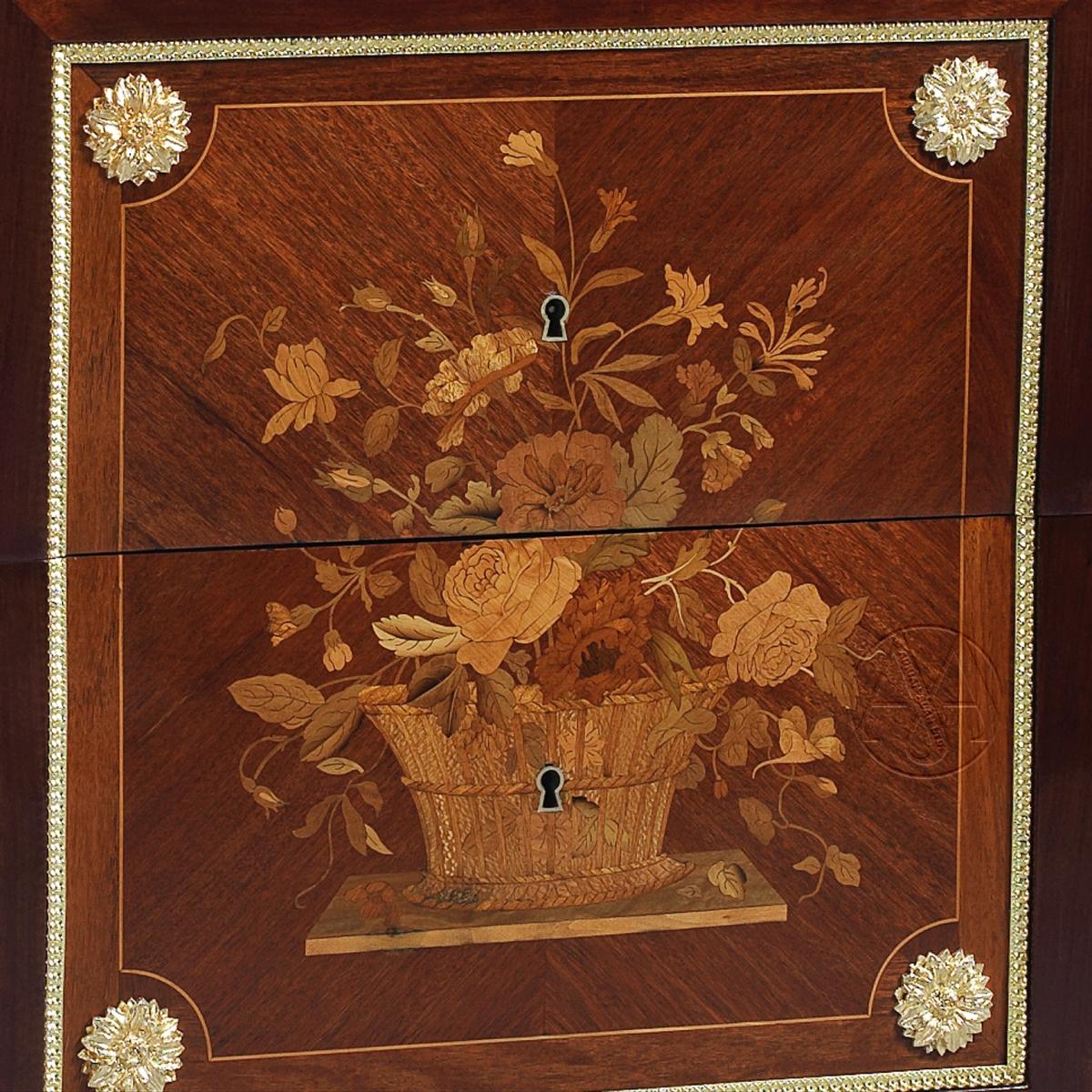 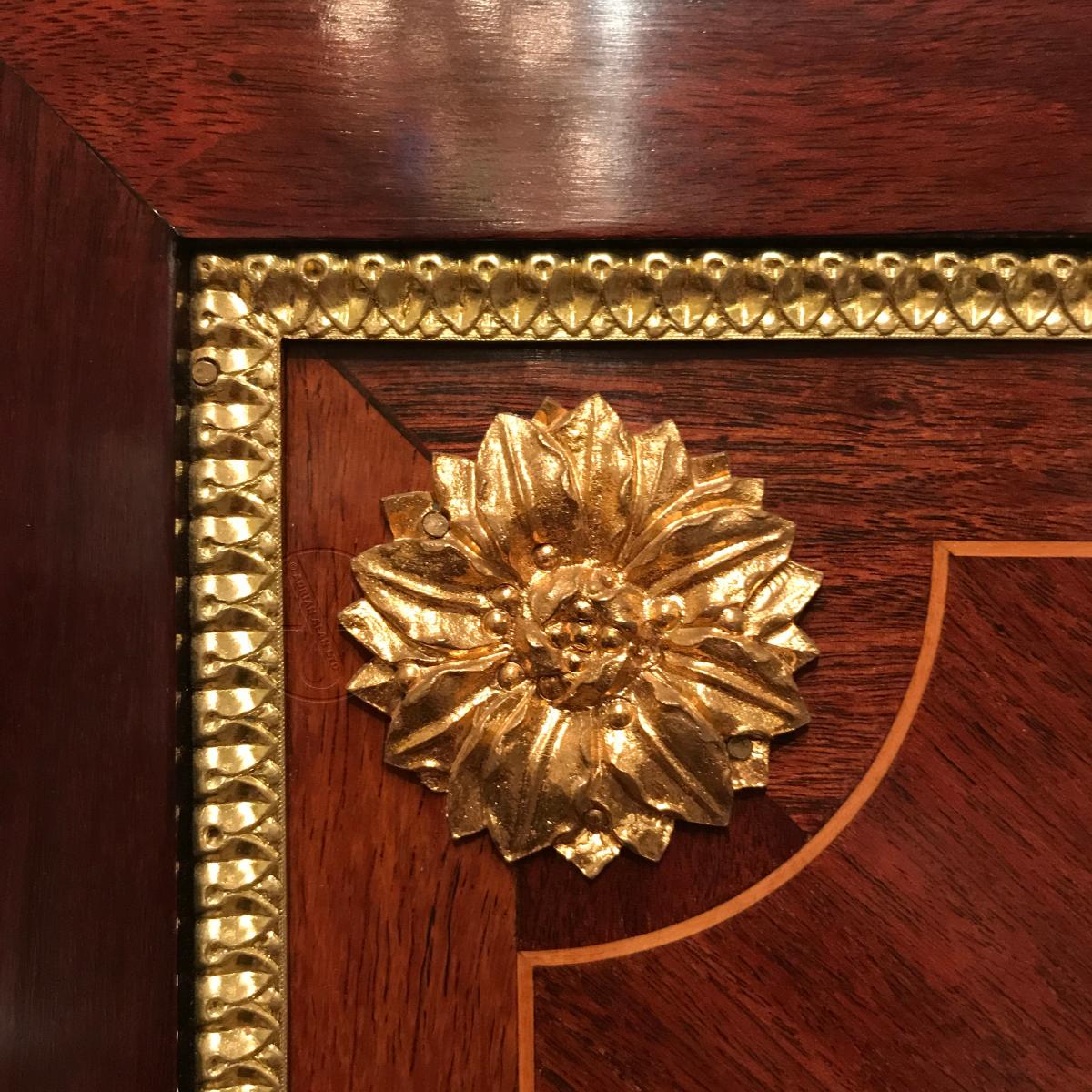 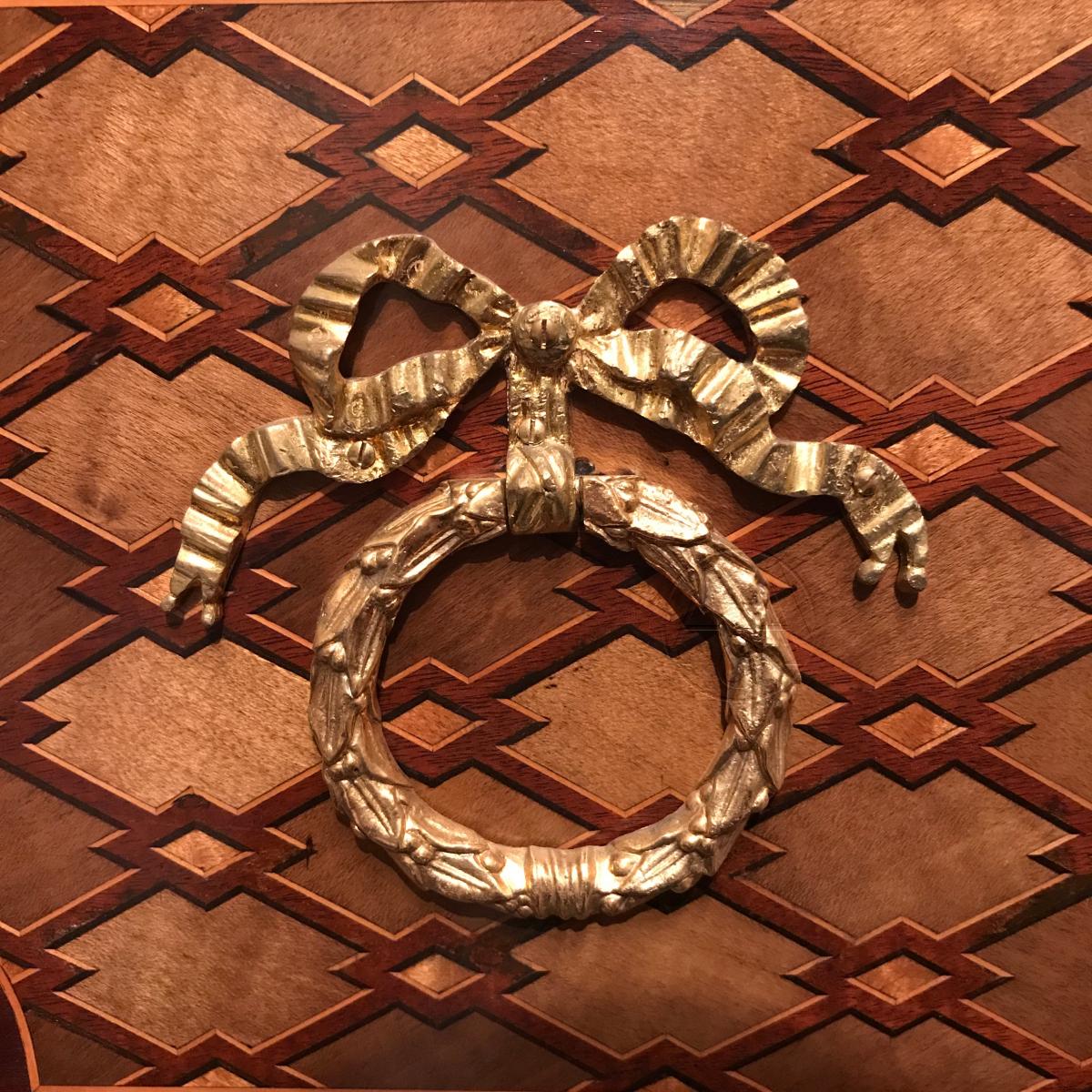 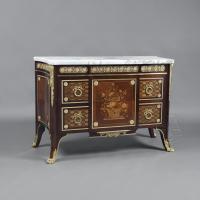 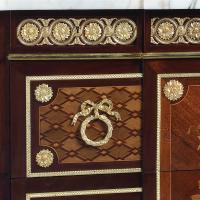 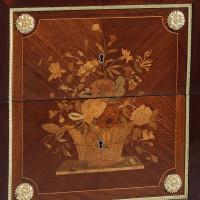 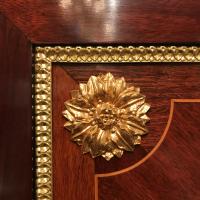 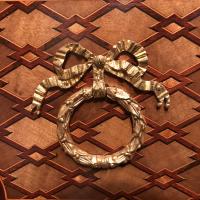 The bronzes stamped to the reverse ‘MK’.

This fine commode has a shaped Carrara Bianco marble top above a case of shallow breakfront form, with two large drawers, set beneath three frieze drawers mounted with guilloche and rosette running pattern.  The commode is veneered sans traverse with a marquetry panel depicting a basket of flowers, framed by panels of stylised foliate parquetry.  The panels are set within a frame of veneers and gilt-bronze mouldings, with ribbon tied handles and paterae.  The angles mounted with finely cast acanthus and foliate mounts and the sides concave in profile.   The commode is raised on out-swept legs terminating in lion paw feet.

This design for this exceptional commode is drawn from a body of work by Reisener that was defined by central panels of marquetry, usually of baskets or vases issuing flowers set against a background of stained sycamore veneer.

Two distinct forms are apparent, those incorporating rectangular marquetry panels and those with a trapezoidal central projection.  Of the first type the best known example is preserved at the Victoria & Albert Museum, London, formerly the John Jones collection, dated around 1776-1780 (inv. 1087-1882).  Further examples include two commodes delivered in 1780 for the Queen’s first apartment at Compiègne.

Examples of the second type, with trapezoidal panels, include a chest of drawers delivered to the Garde-Meuble de la Couronne in December 1776 for the apartment of the Contrôleur Général Des Finances and one delivered for the King's service at the Petit Trianon in 1777, preserved in the castles of Versailles and Trianon (inv. V5198).

A distinctly nineteenth century approach to the decoration of the present commode includes the adoption of panels of stylised rosette and interlaced lattice work on the drawer fronts.  This motif  is inspired by another of Riesener's most famous designs, namely the celebrated commode supplied in 1776 to Louis XVI for his cabinet intérieur at Fontainebleau.  Other notable examples include the commode supplied for the bedchamber at Versailles of the Comtesse de Provence, latterly in the music room at Hamilton Palace and now at Waddesdon Manor and an example made for Marie-Antoinette in the 1780s, and also formerly in the collection of the Duke of Hamilton at Hamilton Palace, now in the Frick Collection.

This geometric equivalent of the inlaid brass and tortoiseshell work of André-Charles Boulle; this distinctive device adopted by Riesener was ultimately derived from loose interpretations of Japanese and Chinese lacquer.

In this fine commode we therefore see a successful fusion of two characteristic Riesener designs; the commode combining a rectangular central marquetry panel with stylised, parquetry inlaid drawer fronts.  The result is immediately recognisable as Riesener but  within the decorative framework of the latter part of the nineteenth century.

Jean-Henri Riesener (1735-1806) lived in Paris and was the foremost cabinet-maker of his generation and the successor to the court patronage of Jean-Francois Œben, whose widow he married in 1767.