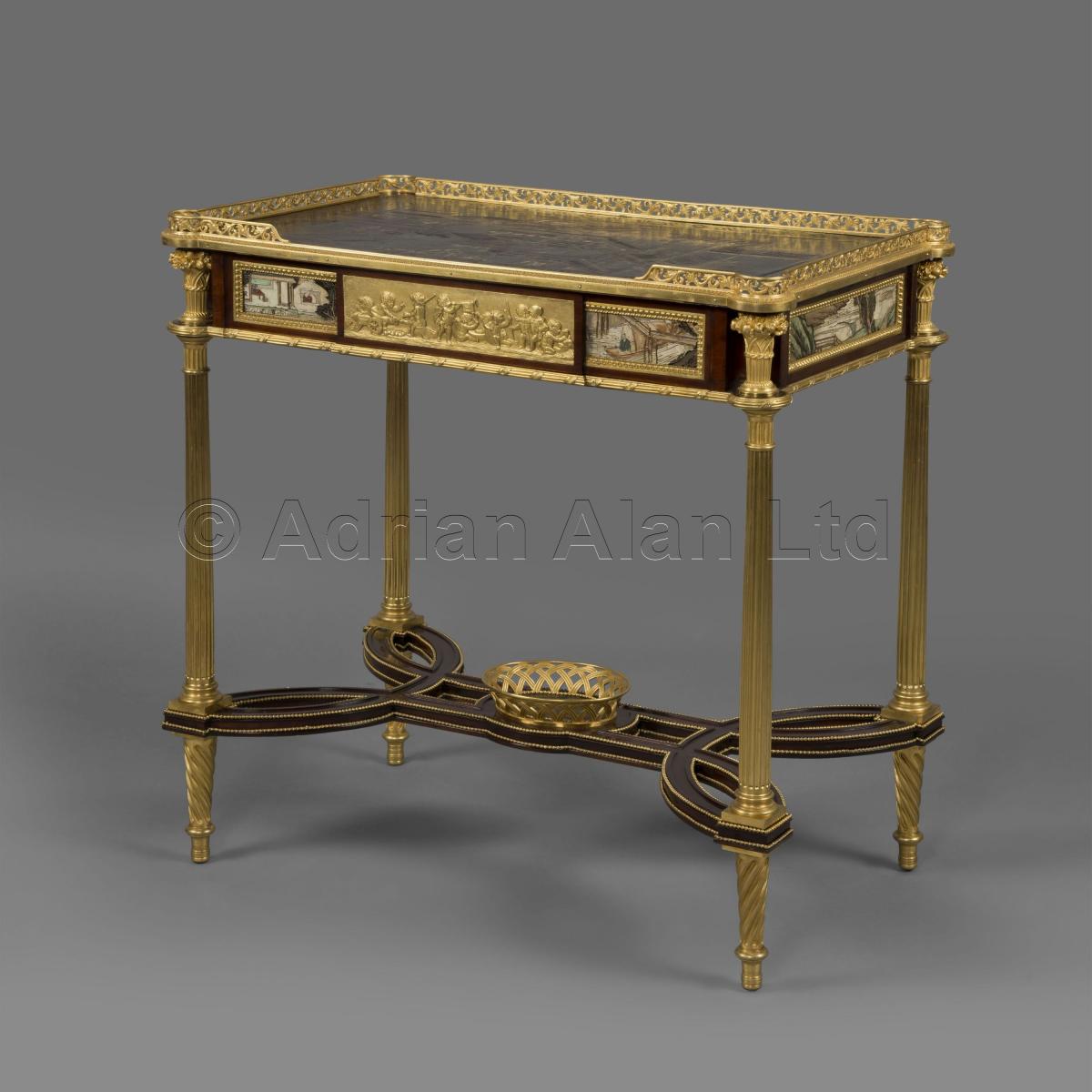 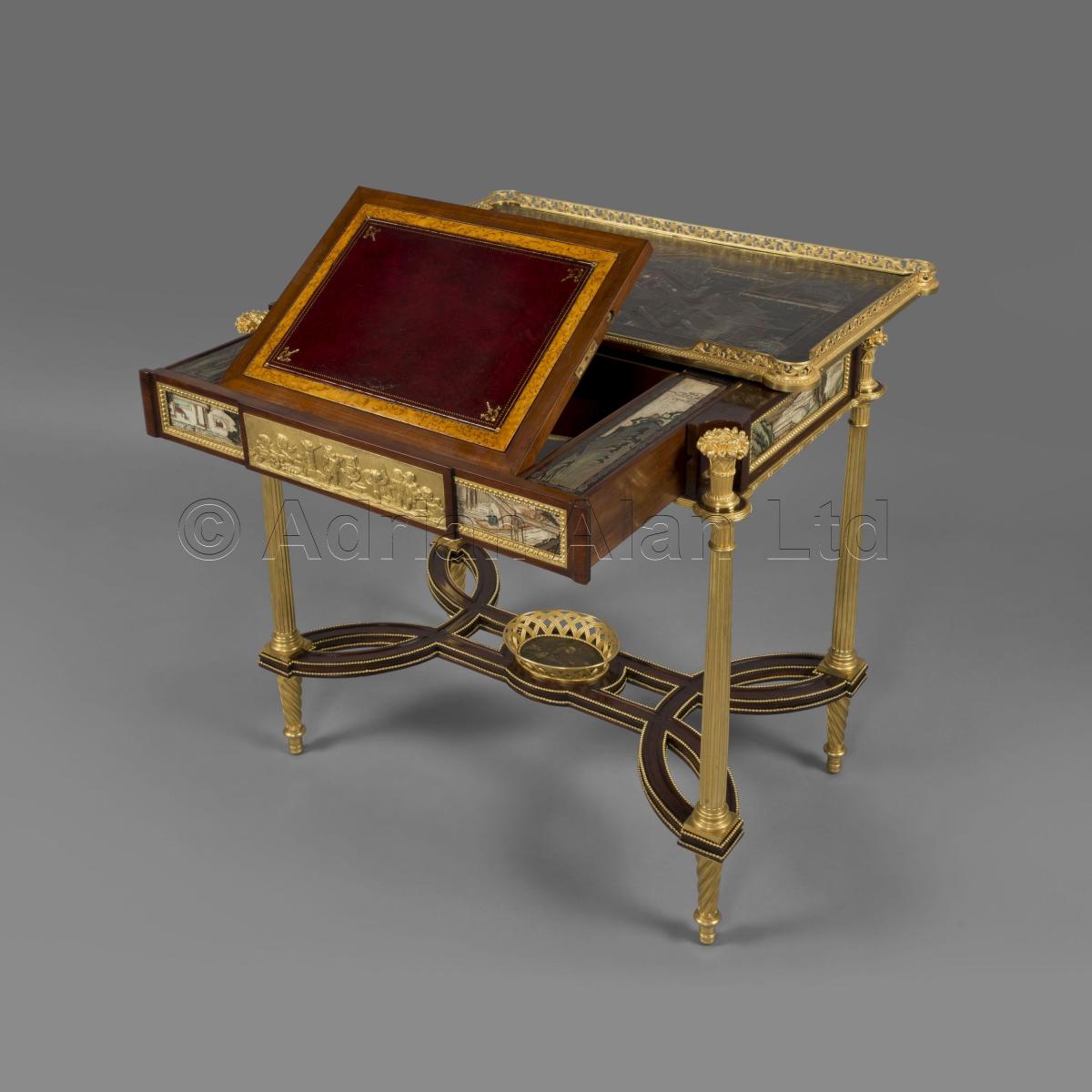 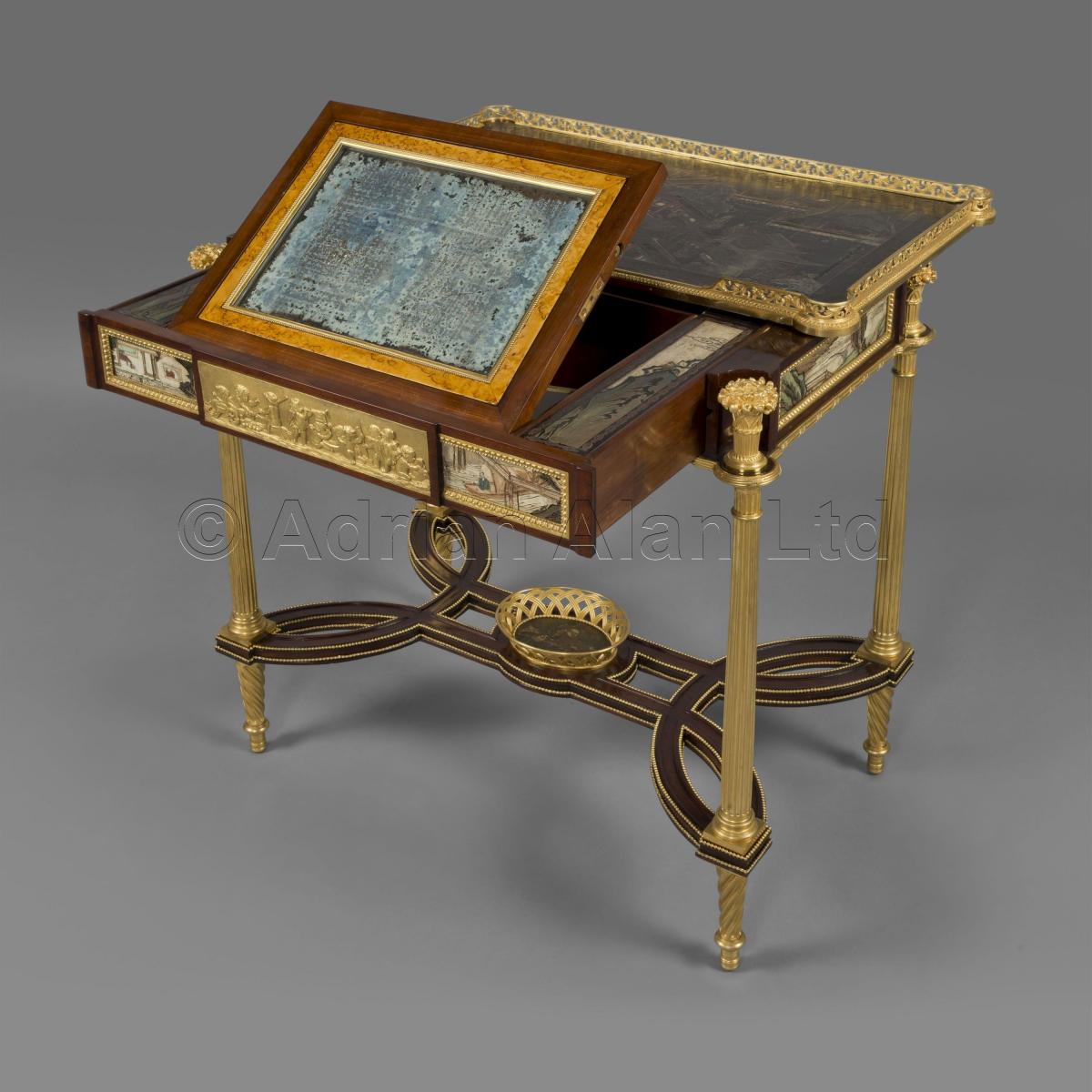 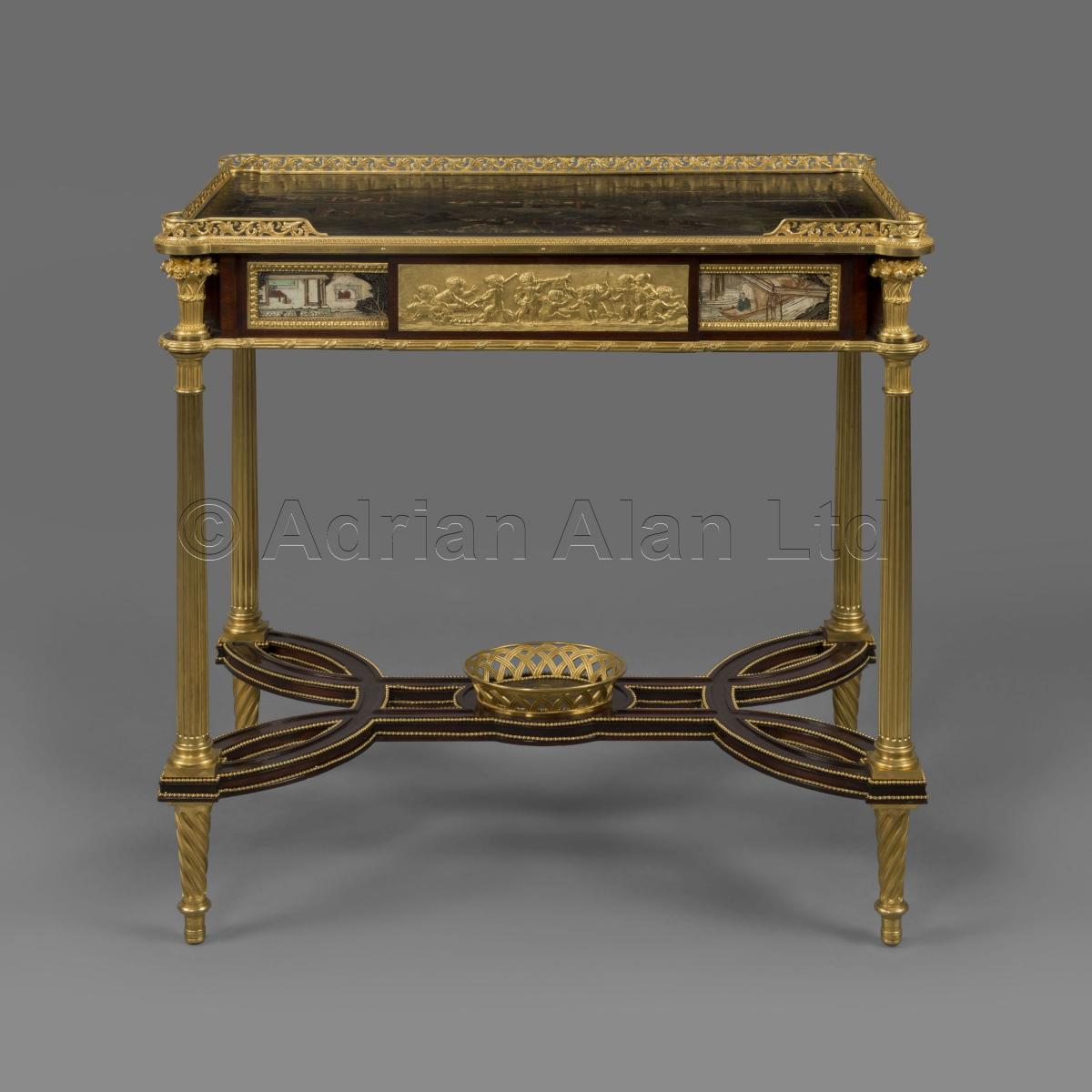 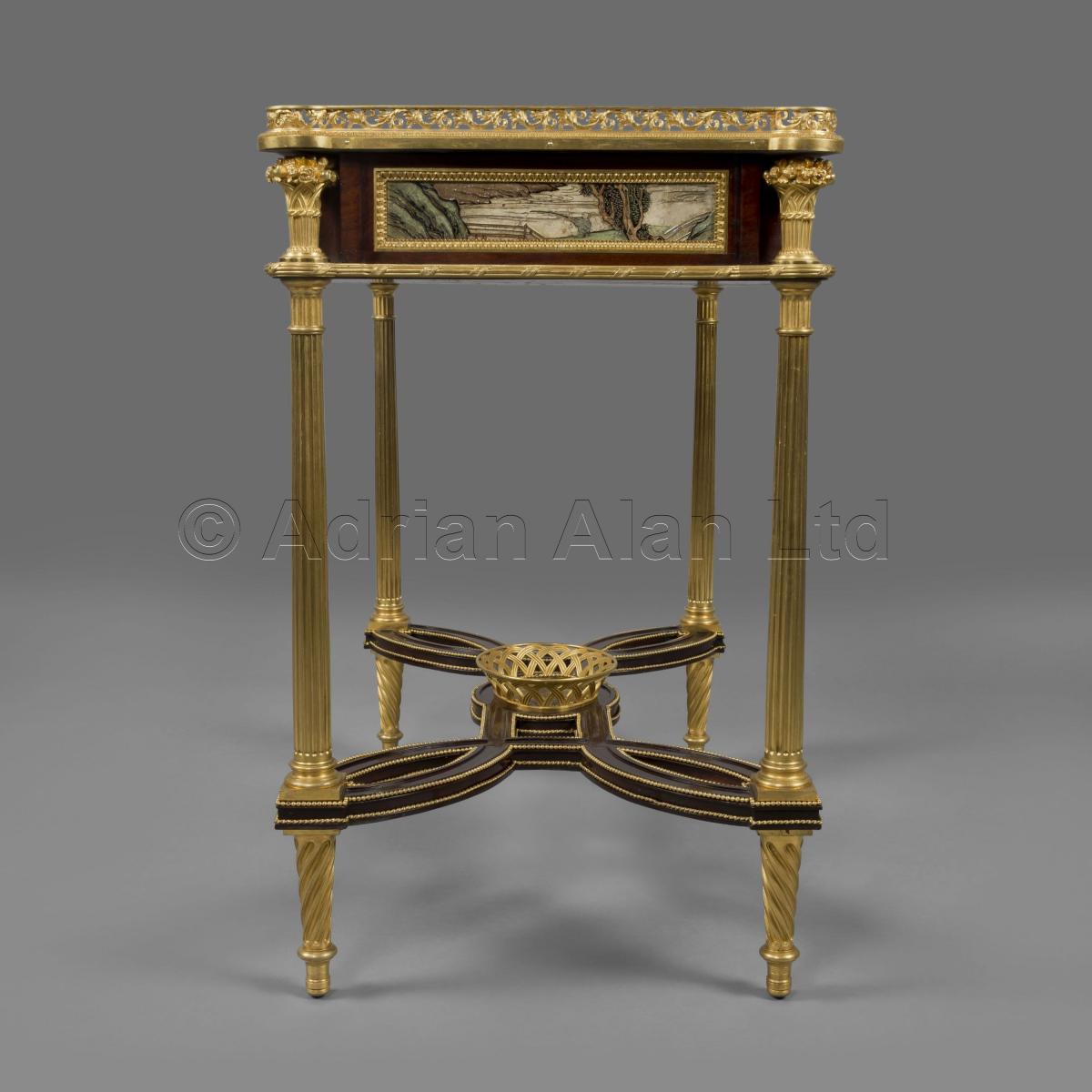 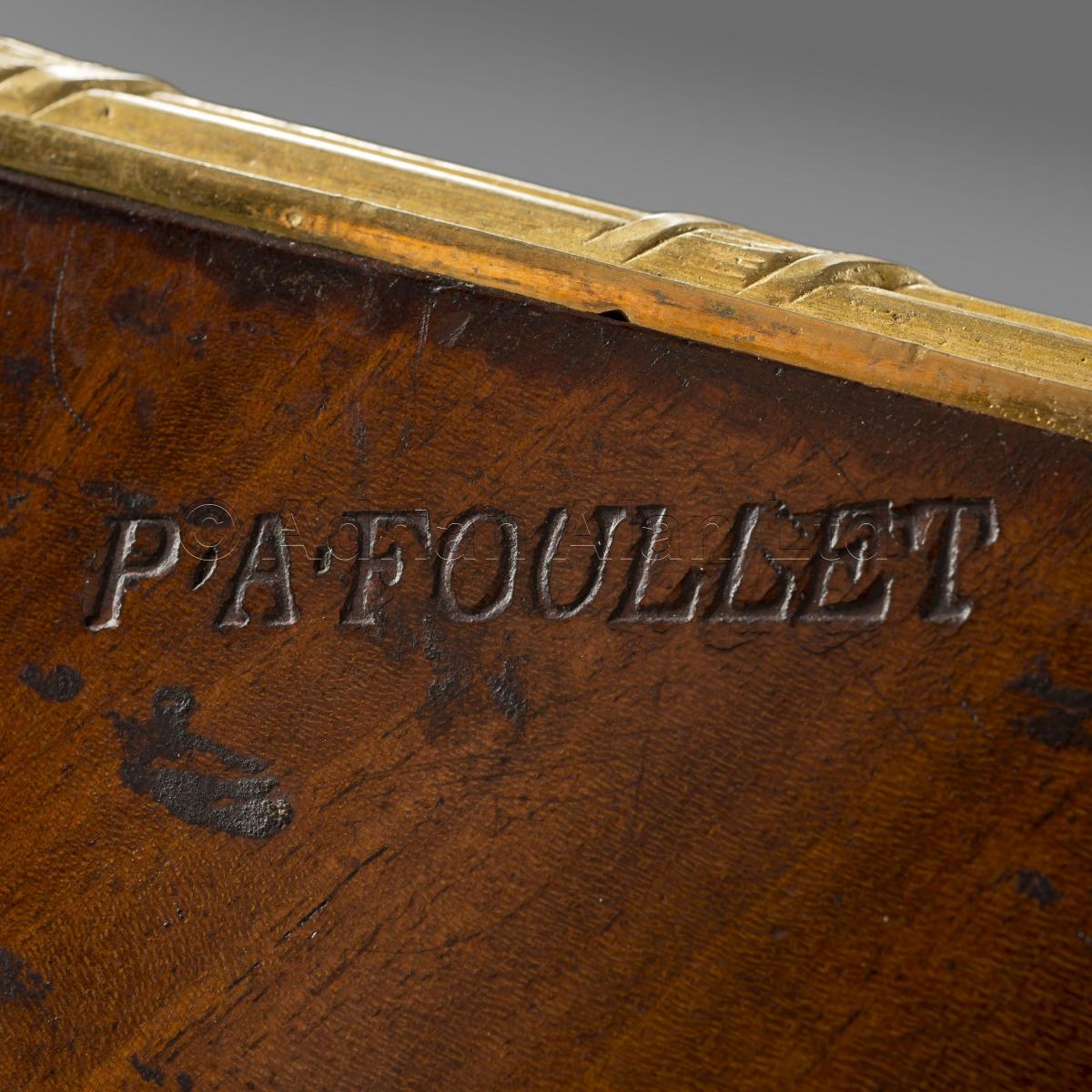 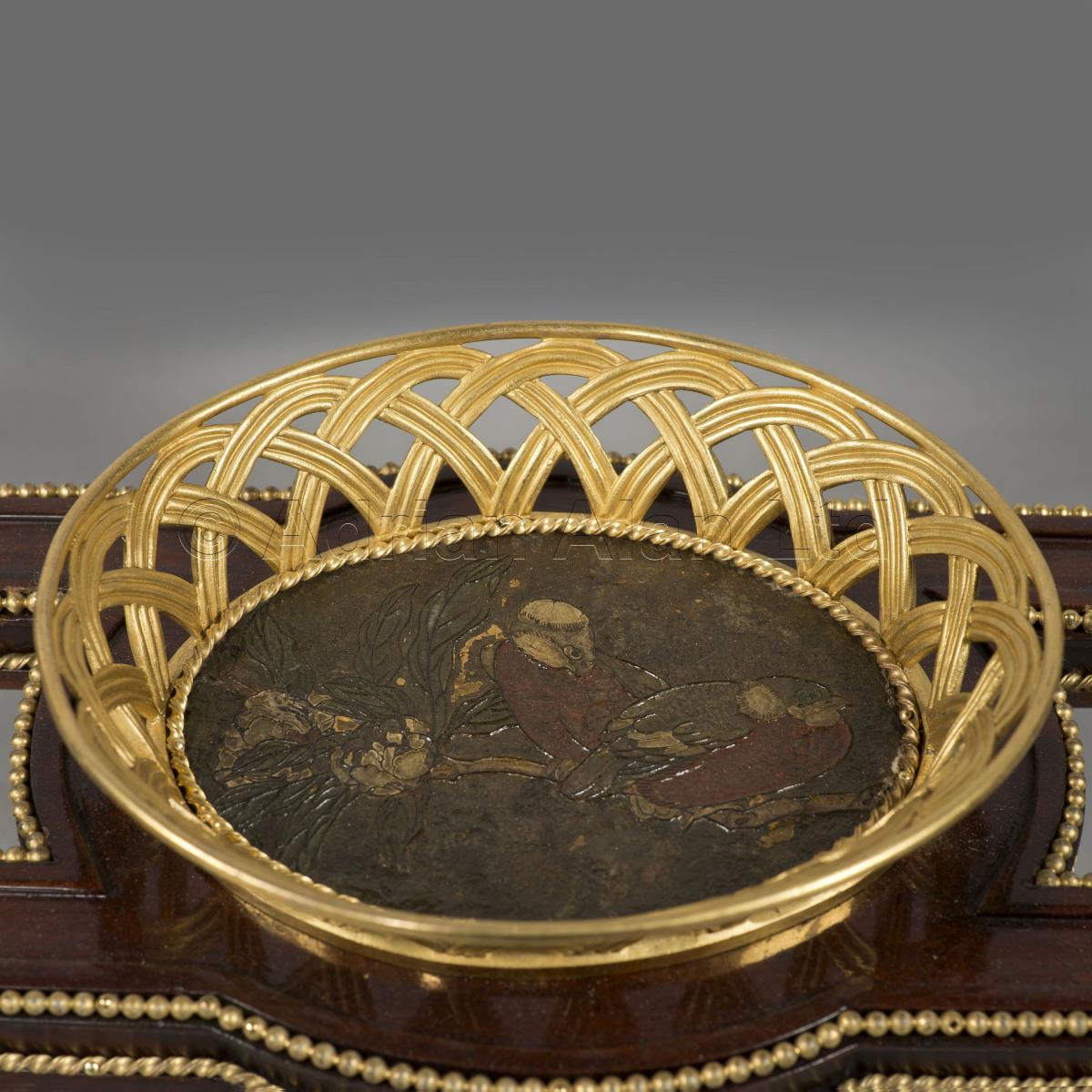 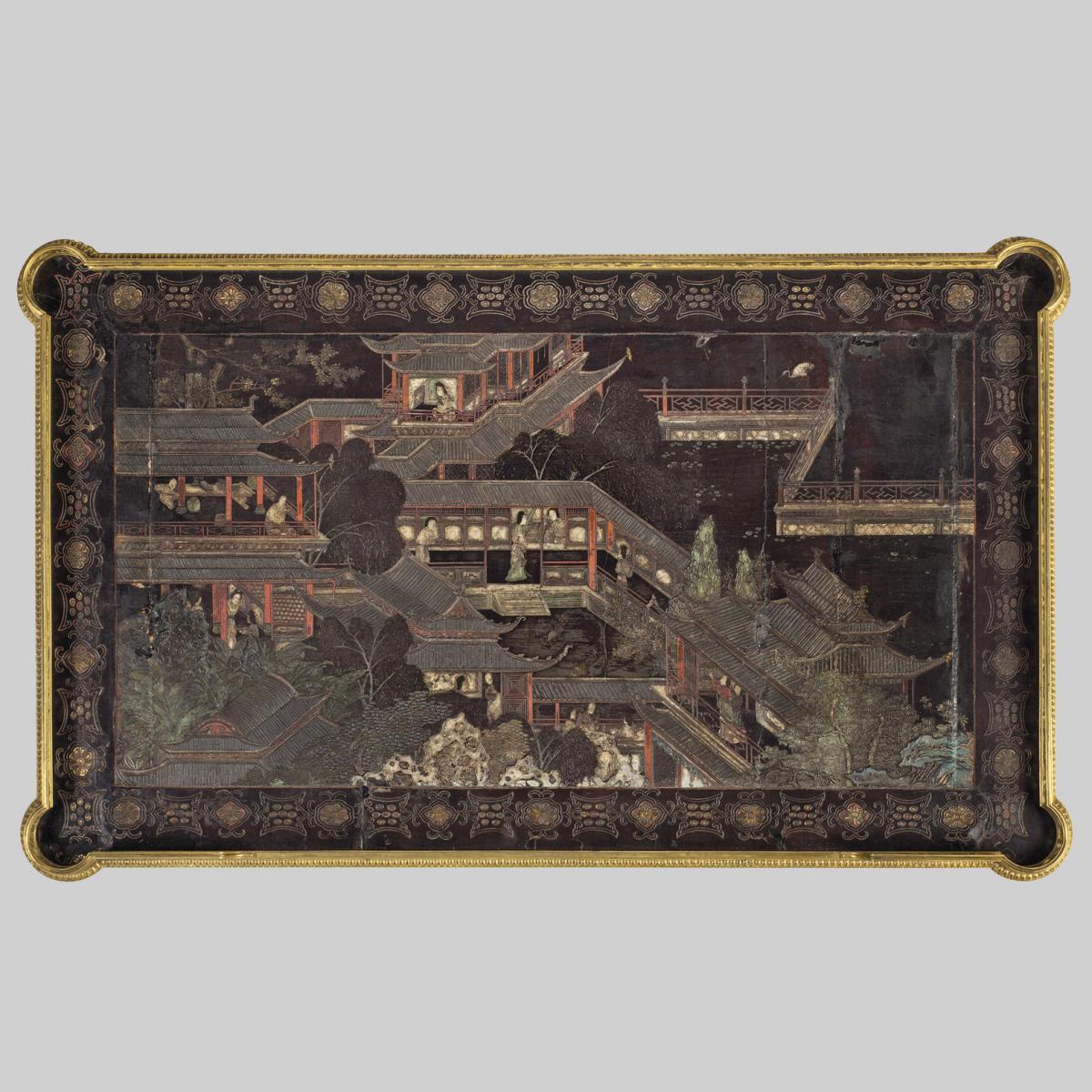 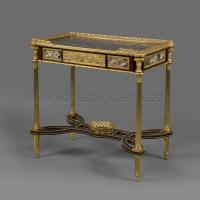 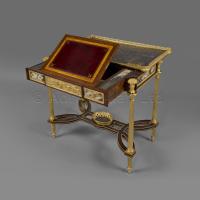 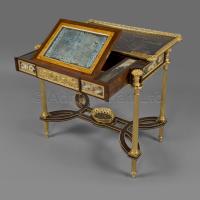 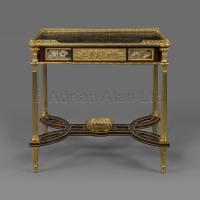 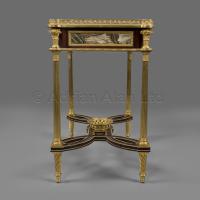 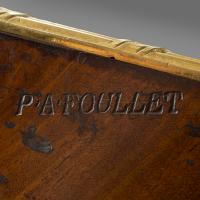 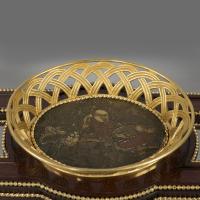 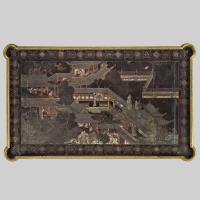 This exceptional and rare ladies dressing table has a rectangular top with projecting rounded corners and a pierced three-quarter gallery.  The top inset with fine 18th century Chinese Coromandel lacquer (probably adapted from a screen) depicting palace scenes and courtiers.  The lacquer top sliding to reveal a revolving mirror and lacquer-mounted interior compartments.  Below is a spring loaded frieze drawer centred by a tablet cast with putti depicting the liberal arts and flanked by further Coromandel lacquer panels.  The table is raised on four tapering fluted uprights, united by a pierced interlaced stretcher with a central basket, and put down on spiral fluted legs and toupie feet.

This very fine table de dame or dressing table is based on the celebrated model by Adam Weisweiller (1744-1820) supplied in 1784 by the Parisian marchand-mercier Daguerre to the Garde-Meuble de la Couronne.   Costing 3260 livres, with bronze mounts by François Remond it was placed in Marie Antoinette's cabinet interieur at the Chateau de Saint-Cloud.  Marie Antoinette had purchased the château de Saint-Cloud from the Duke of Orléans in 1785 and furnished it to her own taste in a refined Louis XVI style.

Marie-Antoinette later gave the table to her friend Madame Polignac.  The table was re-discovered in 1840 by the Prince de Beauvau in a marchand's shop on the Quai Voltaire.  In 1865 in was purchased at auction by the Empress Eugenie and placed in the salon bleu at the Tuileries Palace.  The table now forms part of the collection of the Louvre (inv. OA5509).

The popularity of this model was to influence a number of the leading Parisian cabinet-makers in the third quarter of the nineteenth century.

Adam Weisweiler was German-born. Although scholars know nothing about his apprenticeship and early training, records show that he was established in Paris in 1777, the year he was married. He became a maître-ébéniste in 1778, and set up his workshop in the unfashionable quarter of Paris on the rue du Faubourg Saint-Antoine, and worked mainly for the marchands merciers. These middlemen, such as Dominique Daguerre, would then sell Weisweiler's works to members of the French court, including Queen Marie-Antoinette, the king of Naples, and England's Prince Regent (later George IV).