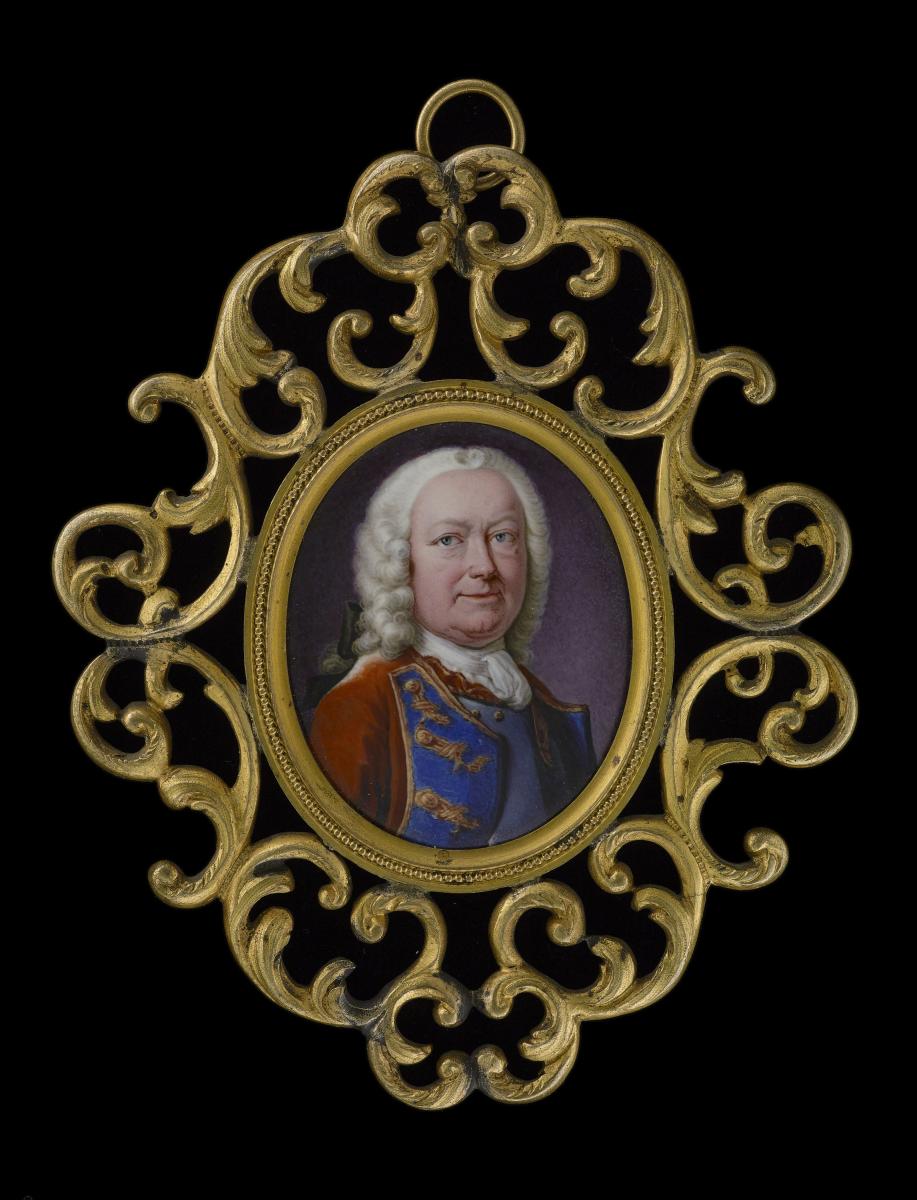 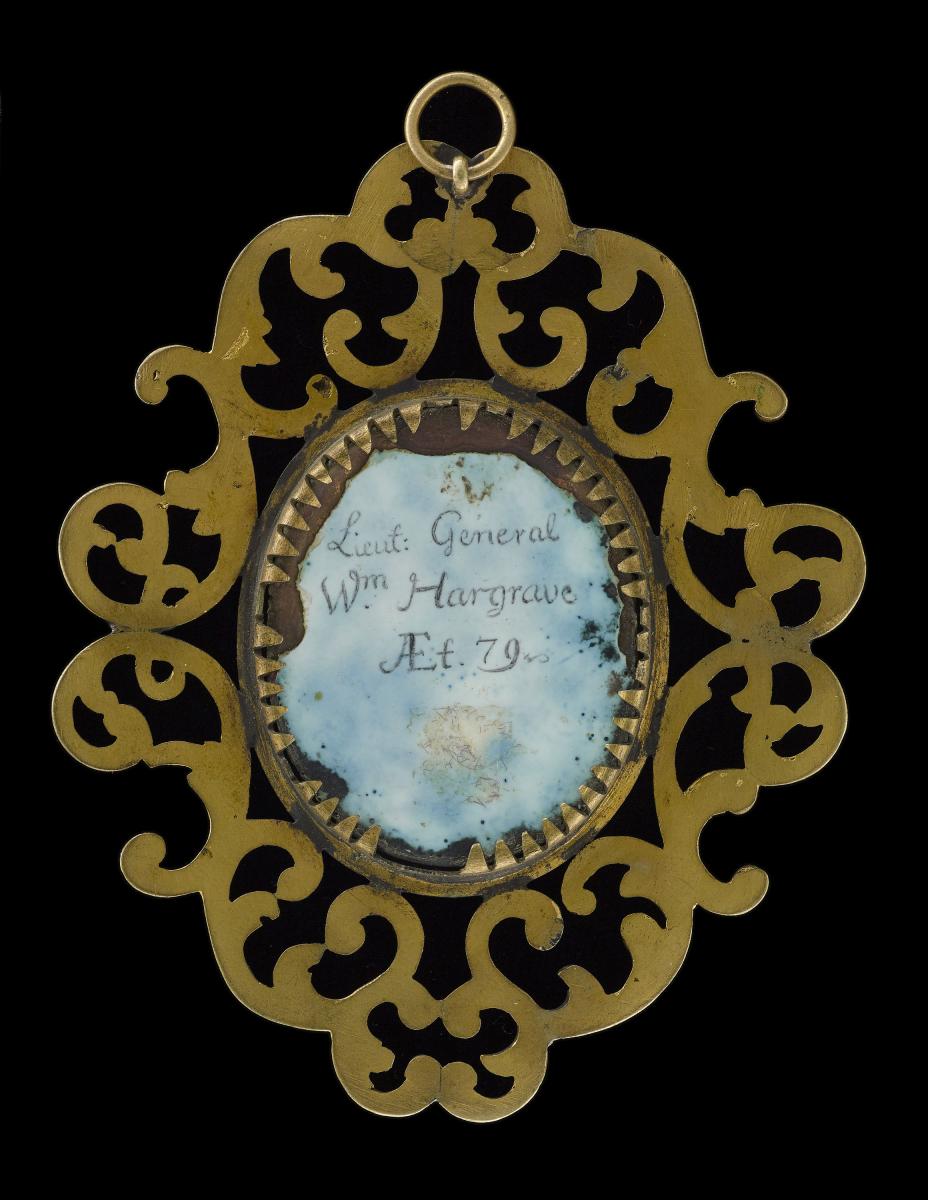 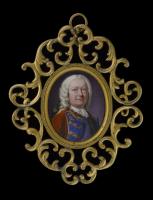 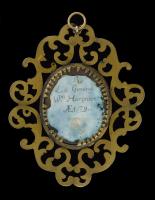 This rare portrait enamel by Abraham Seaman depicts Lieutenant-General William Hargrave, Governor of Gibraltar between 1743 and 1749, and was painted in his 79th year – the year in which he died.

The small island of Gibraltar had been captured in 1704 during the Wars of the Spanish Succession on behalf of the Austrian claimant of the Spanish throne, but then formally ceded to the British at the Peace of Utrecht in 1713. Then as now, the arrangement was somewhat eccentric. Initially, the island had none of the strategic significance that it was later to acquire and was, in the eyes of the British government, simply as a bargaining chip that could be used to exact concessions from the Spanish. However, the continuous attempts that were made by the Spanish to reclaim the island – including one major assault in 1729, which was provoked by the British extension of the island walls to include Jewish and Moorish populations – and the construction in the 1730s of major Spanish mainland defences, caused fortifications concurrently to expand on the Rock. As a result, the governors who were sent to administer the island were men of significant military experience, often at the end of their careers.

William Hargrave was one such man. Over the course of a military career that had spanned some forty years, Hargrave had served in the Low Countries, in Spain during the Wars of the Spanish Succession, and had taken part in the failed Jacobite uprising at the Battle of Sheriffmuir in 1715. Clearly his military skills were so valuable to the crown that this act of gross disloyalty was overlooked and his stock continued to rise. Indeed, shortly before he was appointed to the position of governor, he had been made a Colonel of the Royal Fusiliers. As governor, Hargrave presided over something of a cowboy state, whose citizens lived in an active fort that they were expected to desert at a moment’s notice for the pursuit of military operations and in which many fundamental rights had yet to be granted. The administration survived by exacting levies on passing ships – which often amounted to bribes – and the governor could at times be arbitrary in the implementation of his will. Nevertheless, Hargrave enjoyed a quiet retirement of two years, dying in 1751, the year in which the present miniature was painted. As in the case of this miniature, when he desired his likeness to be recorded Hargrave insisted on the highest standards of craftsmanship. In spite or because of his personally capricious attitude towards rights of law and property, Hargrave was honoured in Westminster Abbey by a spectacular funerary monument designed and executed by the pre-eminent sculptor of the age, Louis François Roubiliac.

Little information on the life and work of Abraham Seaman is known, however, a recently discovered marriage record from the parish of St Katherine’s by the Tower, London tells us that on 25 November 1732 ‘Abraham Seeman […] Limner aged 37 years’ married ‘Catheine Dibeley […] aged 25 years Widdow’. A ‘limner’ typically described a painter, so there is little doubt this record relates to the Abraham in question. If Abraham was 37 when he married in 1732, he would have been born in about 1695, and was therefore younger than his brother Enoch Seeman (b.1694), who, as the eldest son, took his father’s name. Abraham and Catherine appear to have had at least one child, a daughter named Isabella Susan, born on 18 November 1738 and christened at St. James, Westminster six days later.

Seaman appears to have spent the latter years of his life in Birmingham as a supplier of enamel colours prior to his death in October 1752. His burial record states him as ‘a pole’, which would seem to support the theory he was born in Danzig (Gdańsk) and brought over to England by his father in 1704, along with brothers Enoch, Isaac and Noah.