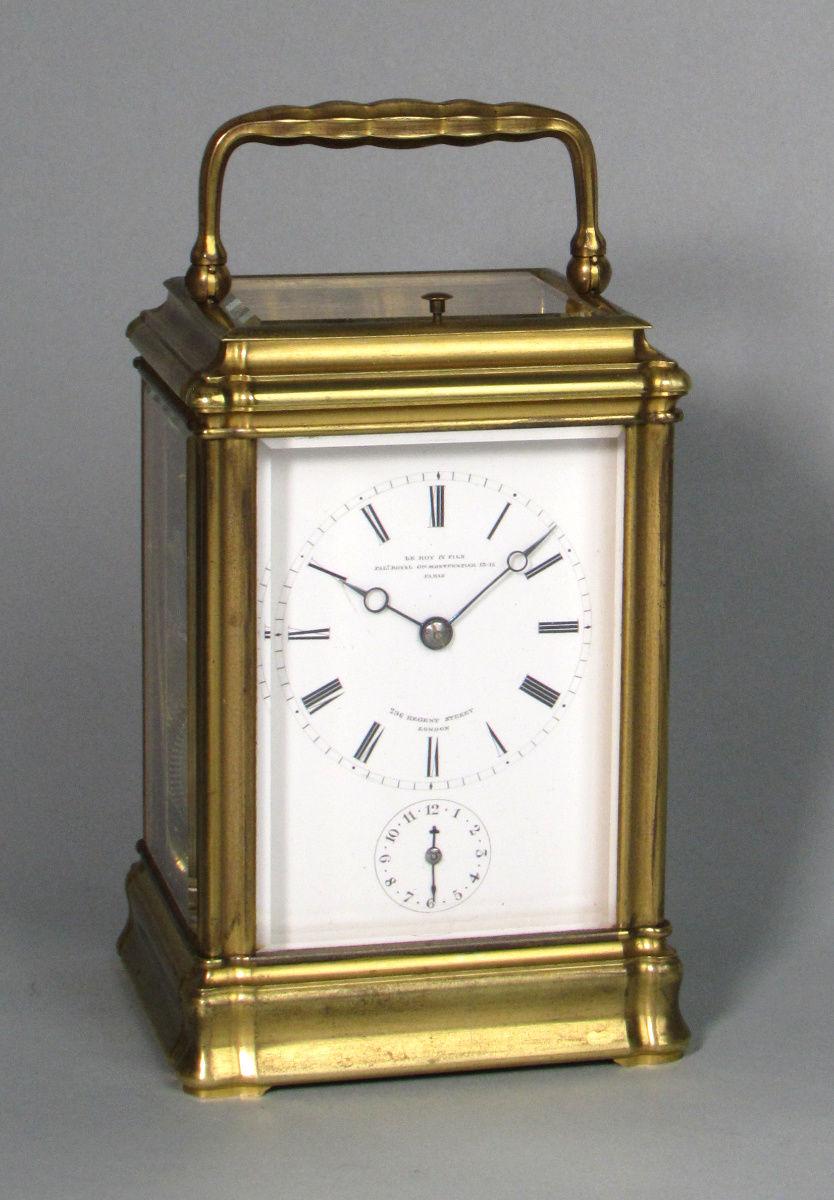 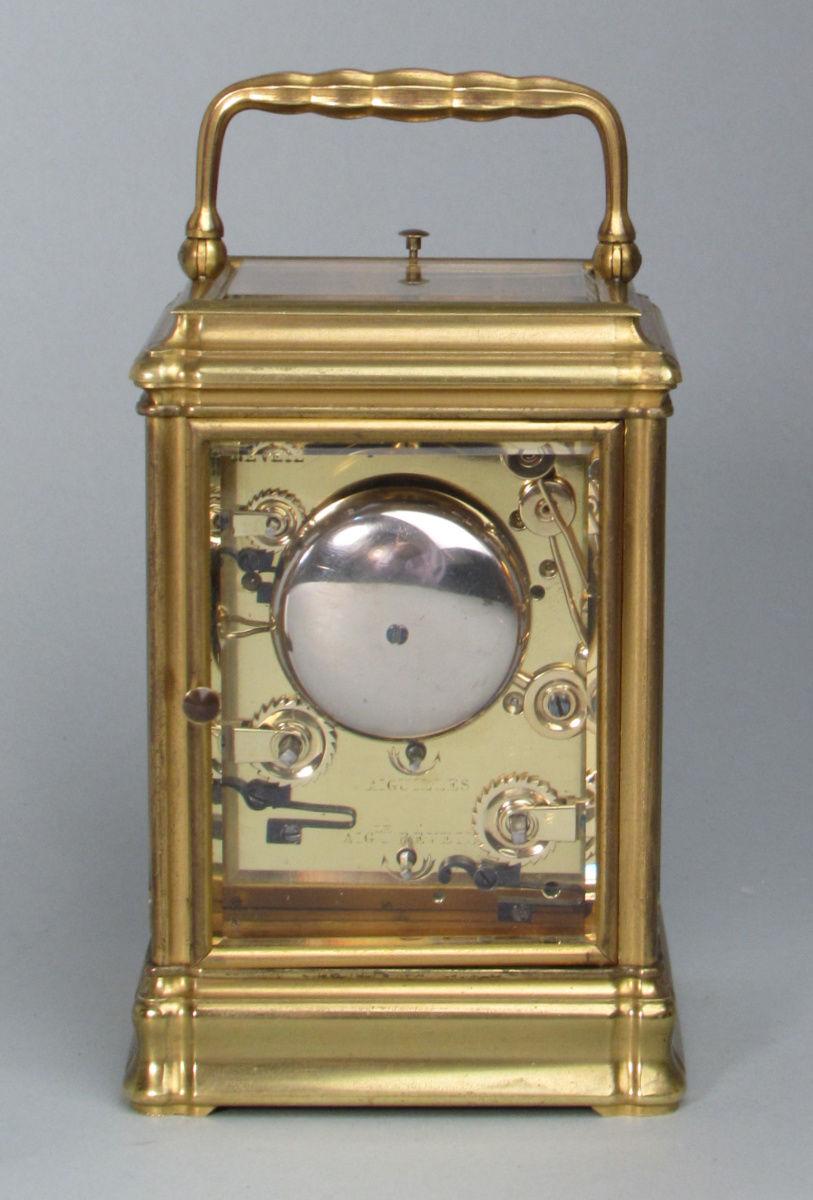 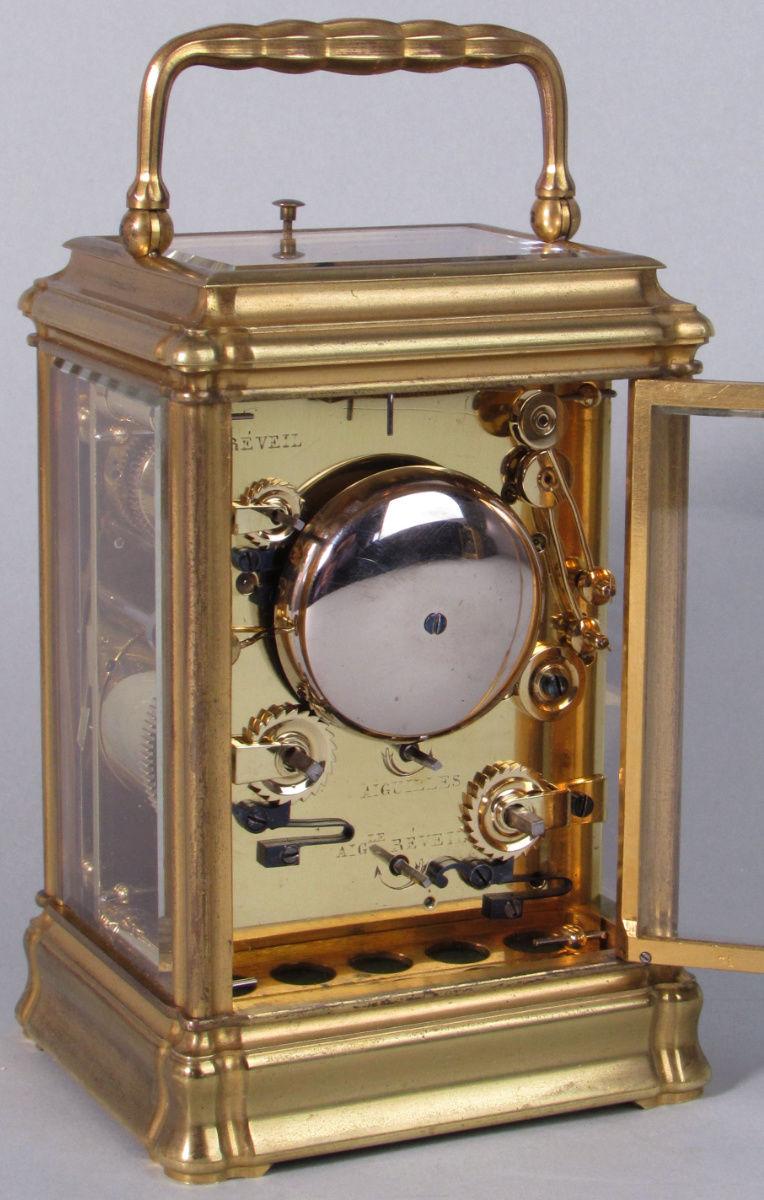 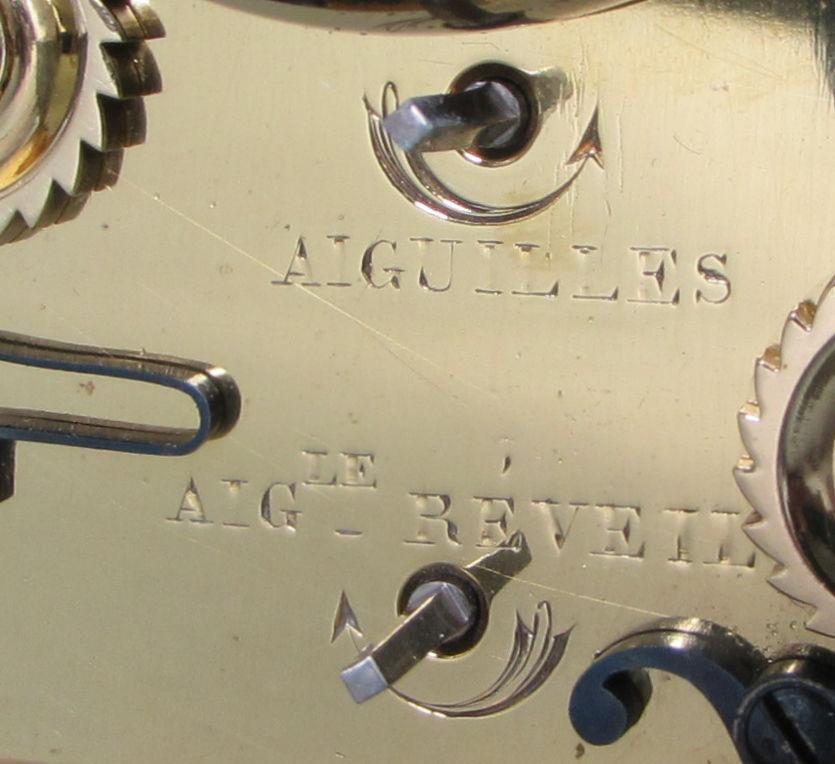 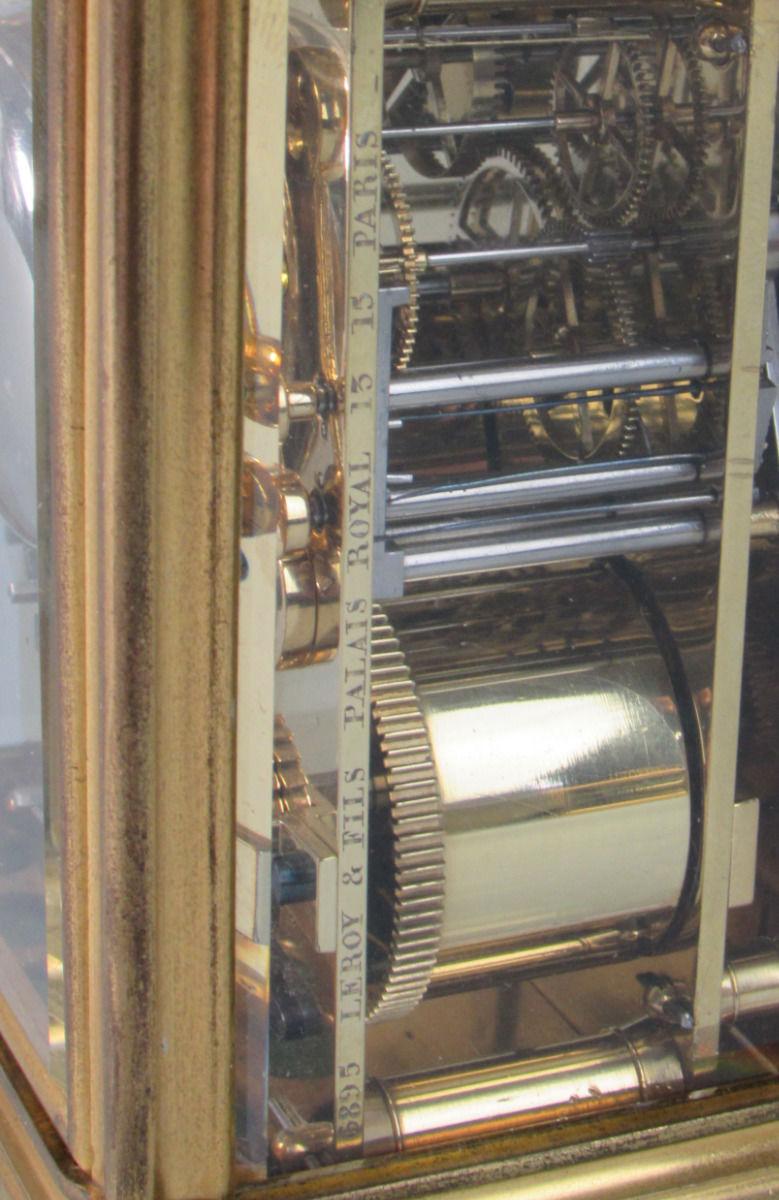 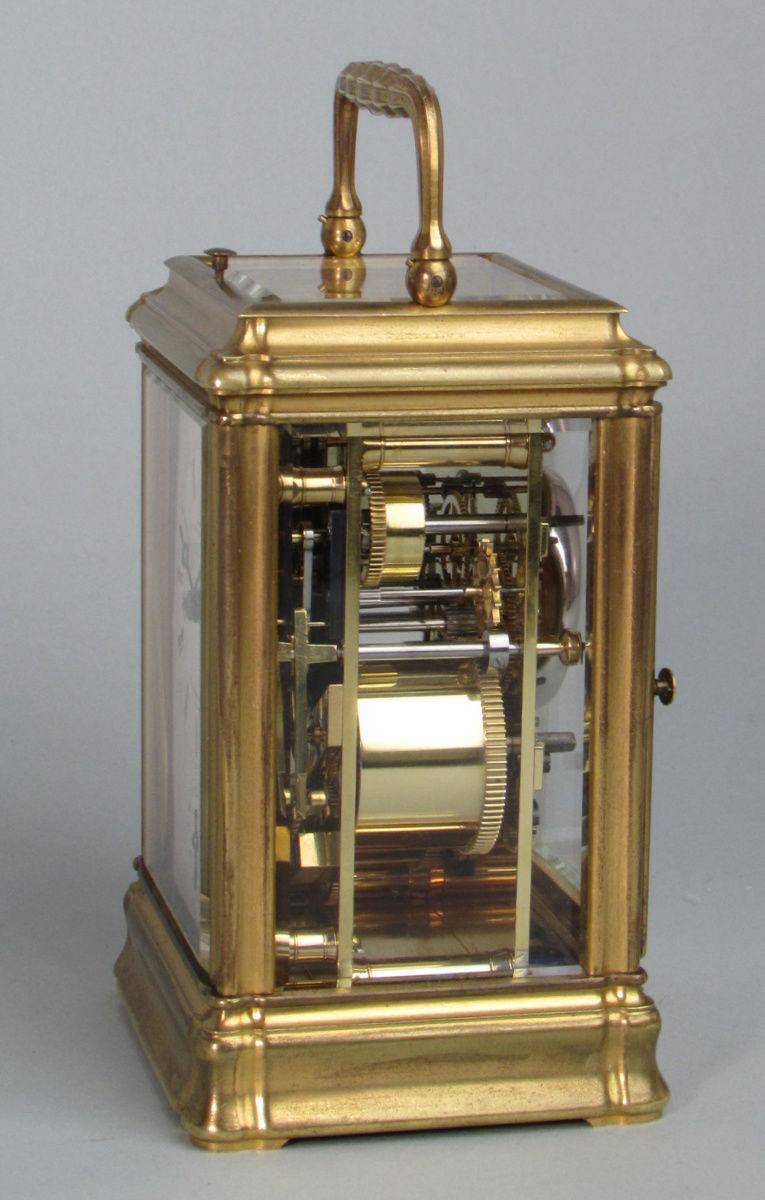 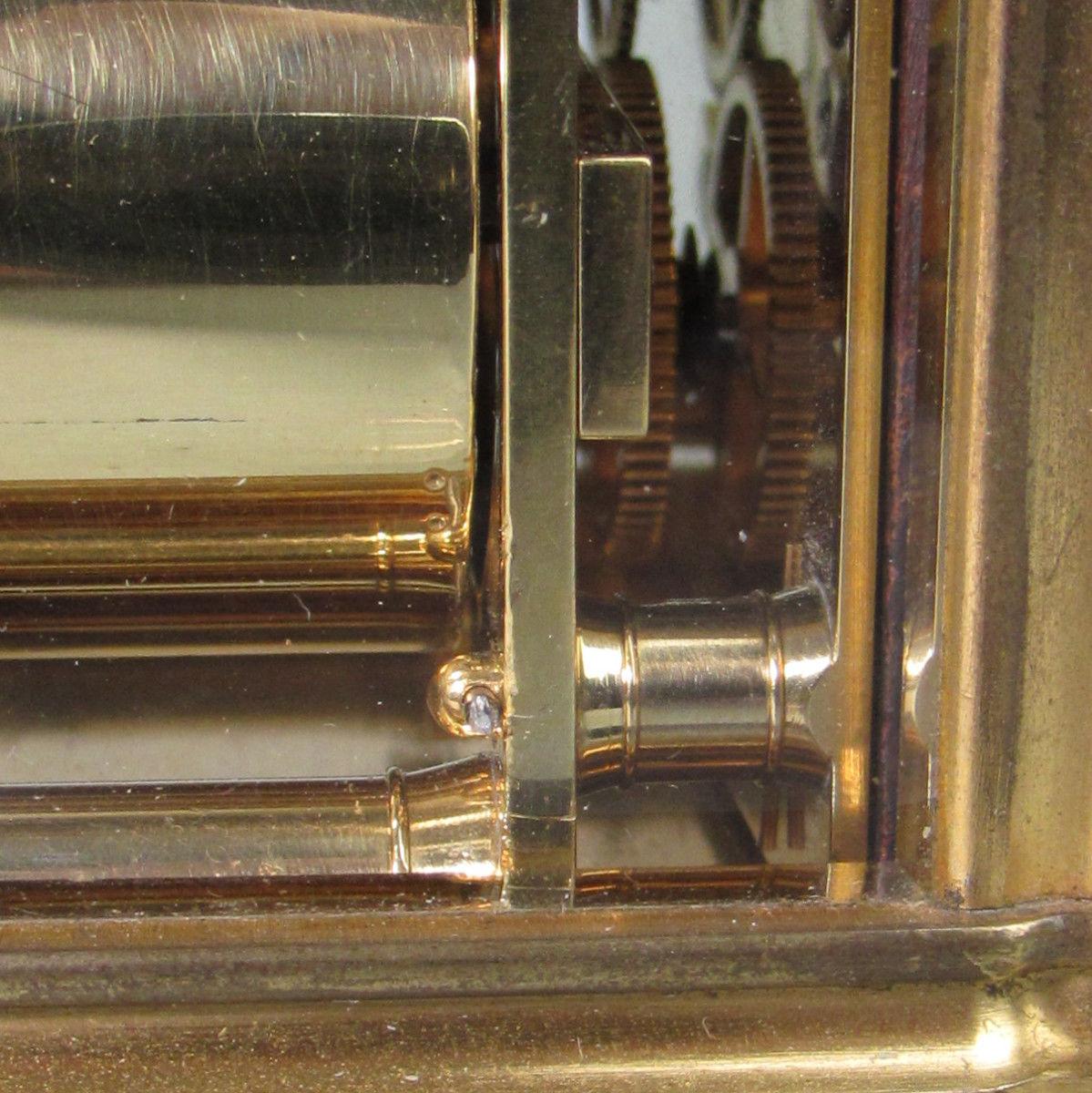 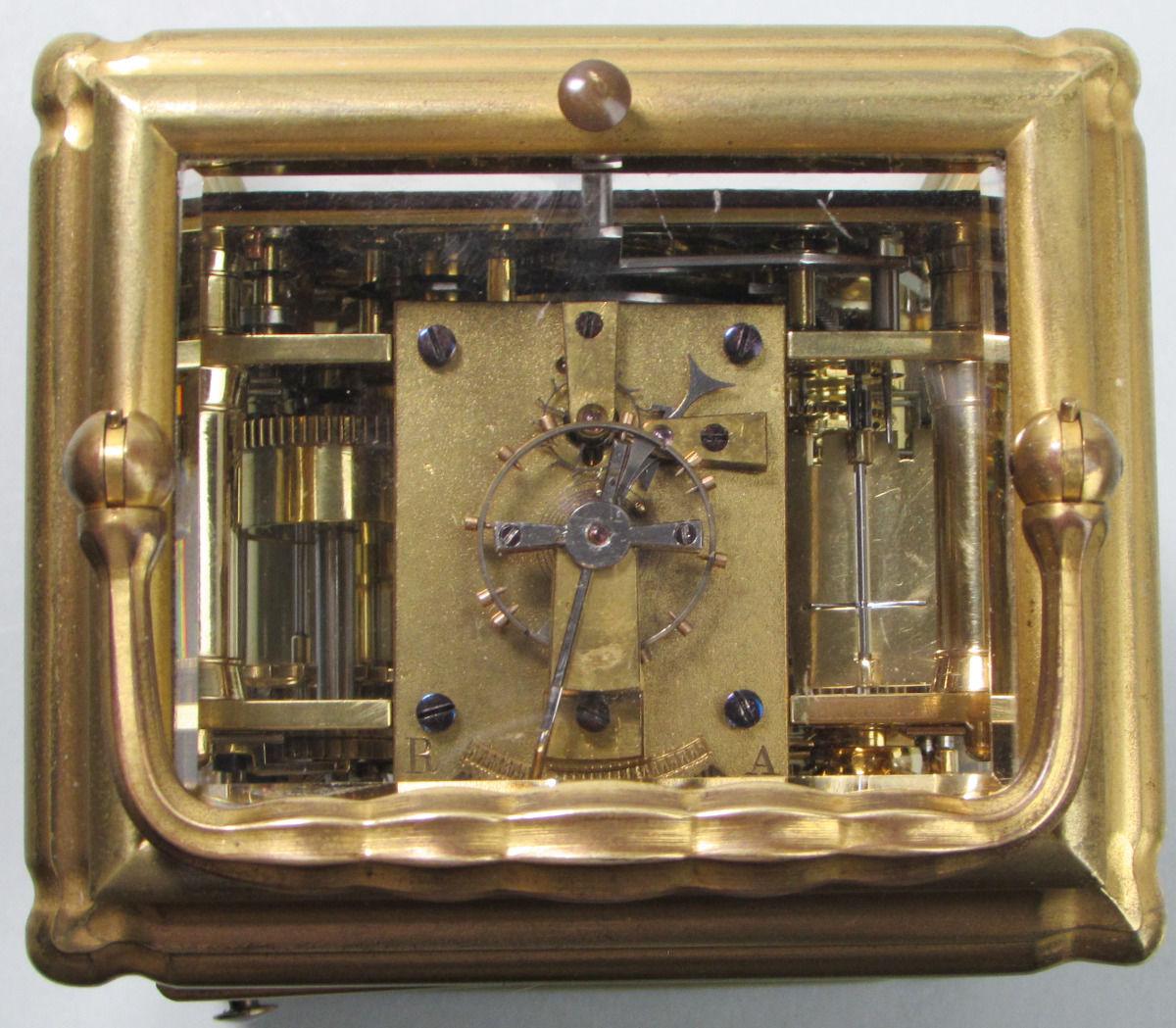 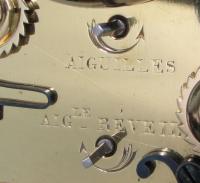 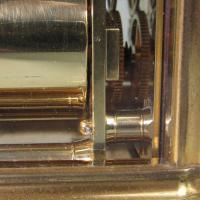 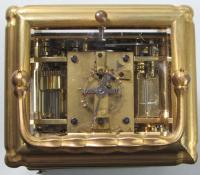 A relatively unusual half-hour sonnerie striking carriage clock for Le Roy of Paris and although this movement is unsigned it can be safely attributed to the Saint-Nicolas d'Aliermont workshops of Louis Baveux and Henri Jacot.

​The eight-day duration movement is of typical Baveux form with double-finned dial pillars, blued steel strikework and the usual style of font for the backplate wording and Baveux design for the hand setting arrow. It has Jacot half-hour sonnerie whereupon at the hour it strikes the hours on a bell and then at the half-hour strikes both the hour and half-hour on two bells, a form of strike that was used almost exclusively by Jacot at this period, and with a push repeat button to the top sounding the last hour and quarter at will. The platform lever escapement is also typical of those used at this time by Baveux/Jacot with a matt-gilt finish and club-tooth teeth. The movement is signed down the sides of the plate for the retailer Le Roy & Fils, Palais Royale 13 & 15, Paris and numbered 6895, with the inside stamped with the blanc roulant number for Baveux, 875.

The gorge case has the sharp corners as seen with the earlier models, being made circa 1875, and a five-bail gorge handle.

This form of half-hour sonnerie is fairly unusual and is normally only seen on examples coming from the Saint-Nicolas d'Aliermont workshop of Louis Baveux whether signed for Jacot or left unsigned. See my Jacot Exhibition catalogue from 2015, via the website, for further information and research on both the Jacot and Baveux families.

Basile-Charles Le Roy was born in Paris in 1765, the son of the clockmaker Bazile Le Roy (1731-1804) and became a maître in 1788 having founded la Maison de Le Roy at 60, Galerie de Pierre, Palais-Royal in circa 1785 following the opening of the Palais-Royal gardens to the public and its buildings to the trade by Philippe Egalité, the duc d'Orléans, allowing a number of other clockmakers to set up shop in the arcade galleries. Following the French Revolution, during which Le Roy worked for the Republic signing his clocks Elroy, Le Roy moved his business to Galerie Montpensier, 13-15 Palais-Royal, where they were to remain for nearly a hundred years. Le Roy was appointed a clockmaker to the Emperor Napoleon and to the latter's mother Madame Mère, as well as being clockmaker to Princess Pauline and Jérôme Bonaparte, King of Westphalia and then in 1829 he was appointed Royal Clockmaker to the duc de Bourbon and duc de Chartres. He exhibited clocks at the Paris Exposition of l'an VI (1797/8) and then 1819, 1823 and 1827. Basile-Charles's son Charles-Louis, born 1794, joined his father as a partner in 1828 after which the business became known as Le Roy et Fils and he was appointed both Horloger du Roi and Horloger du Ministère de la Marine in 1835. Basile-Charles died in 1839 and Charles-Louis in 1865, after which the business continued at the same address.

Fully restored & guaranteed The case has been left untouched