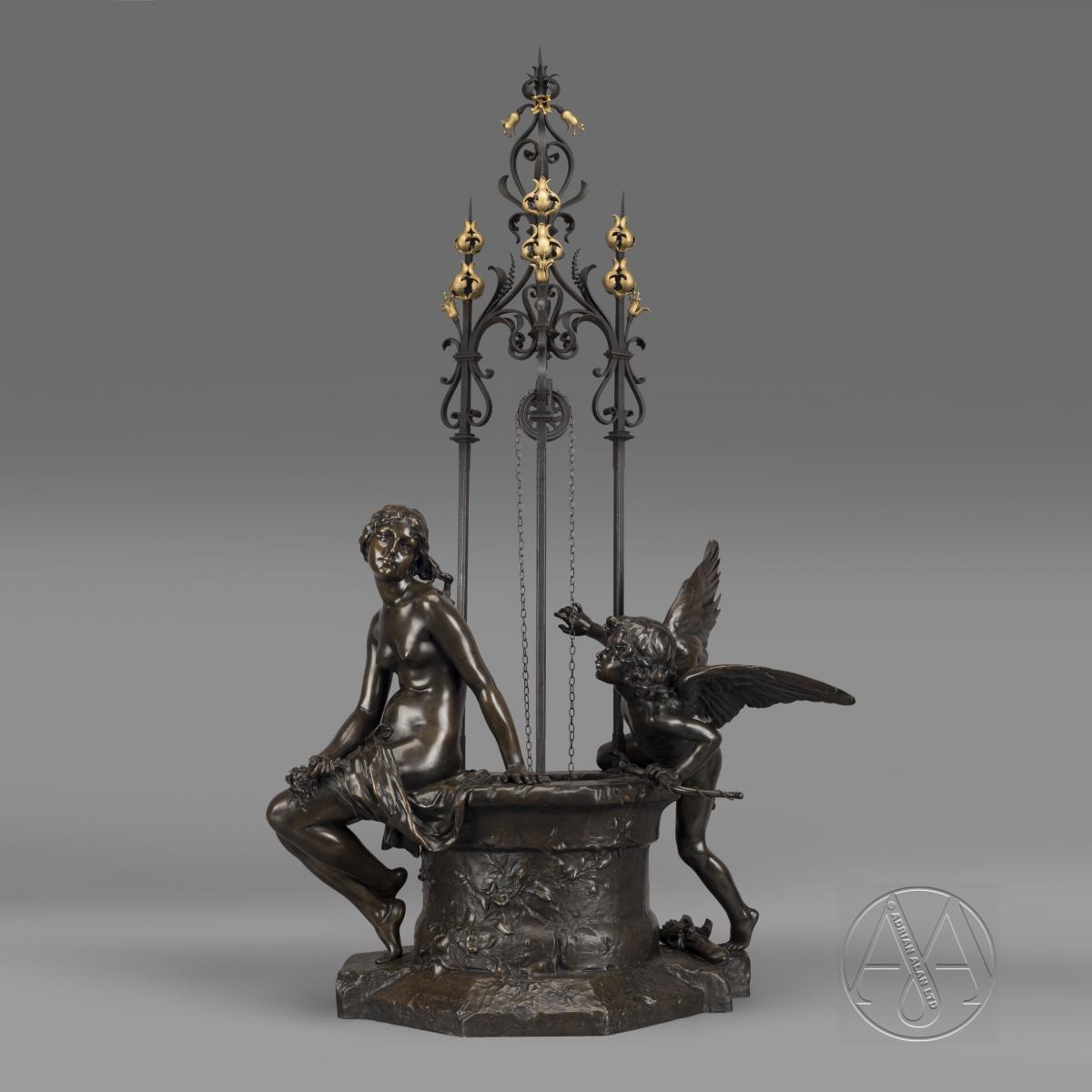 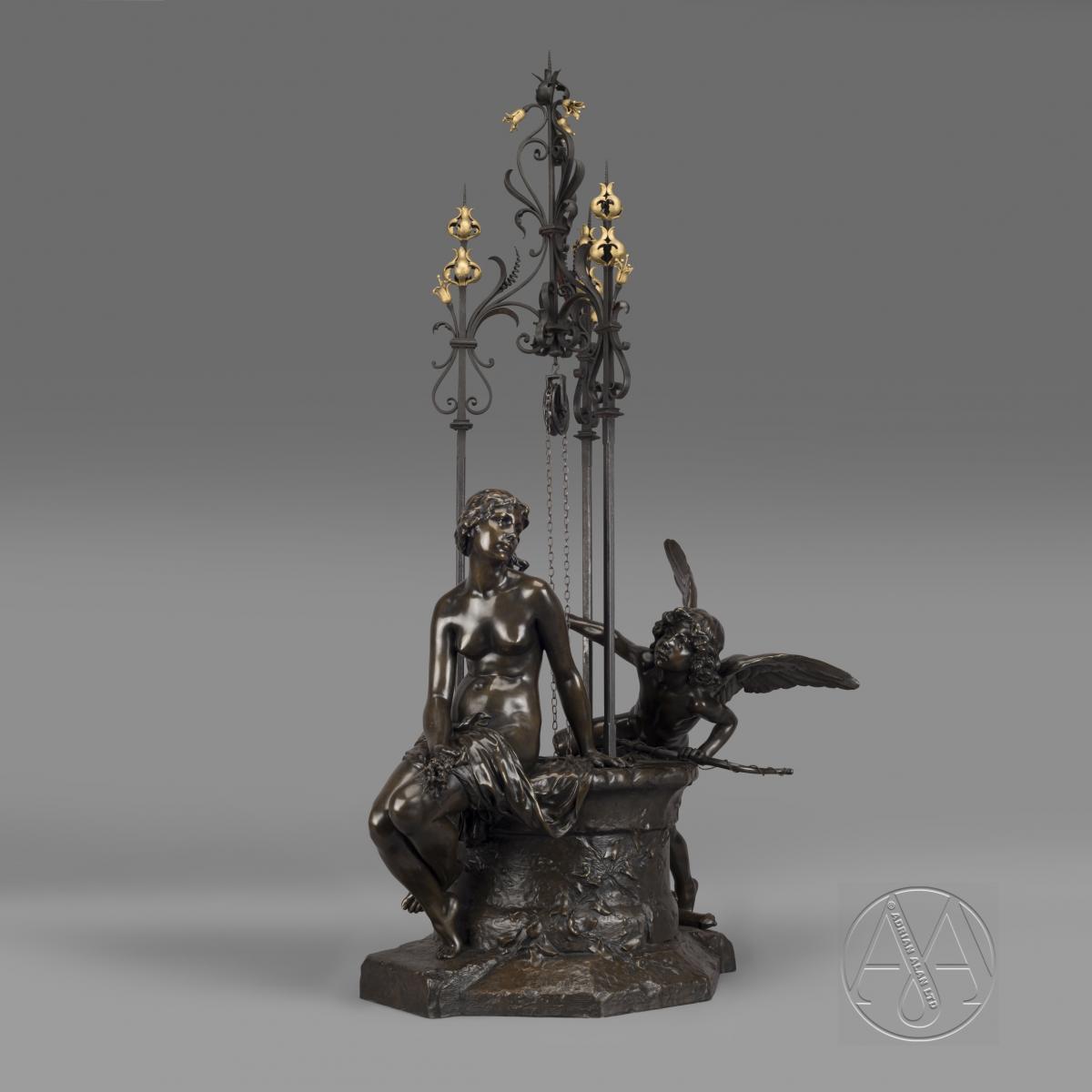 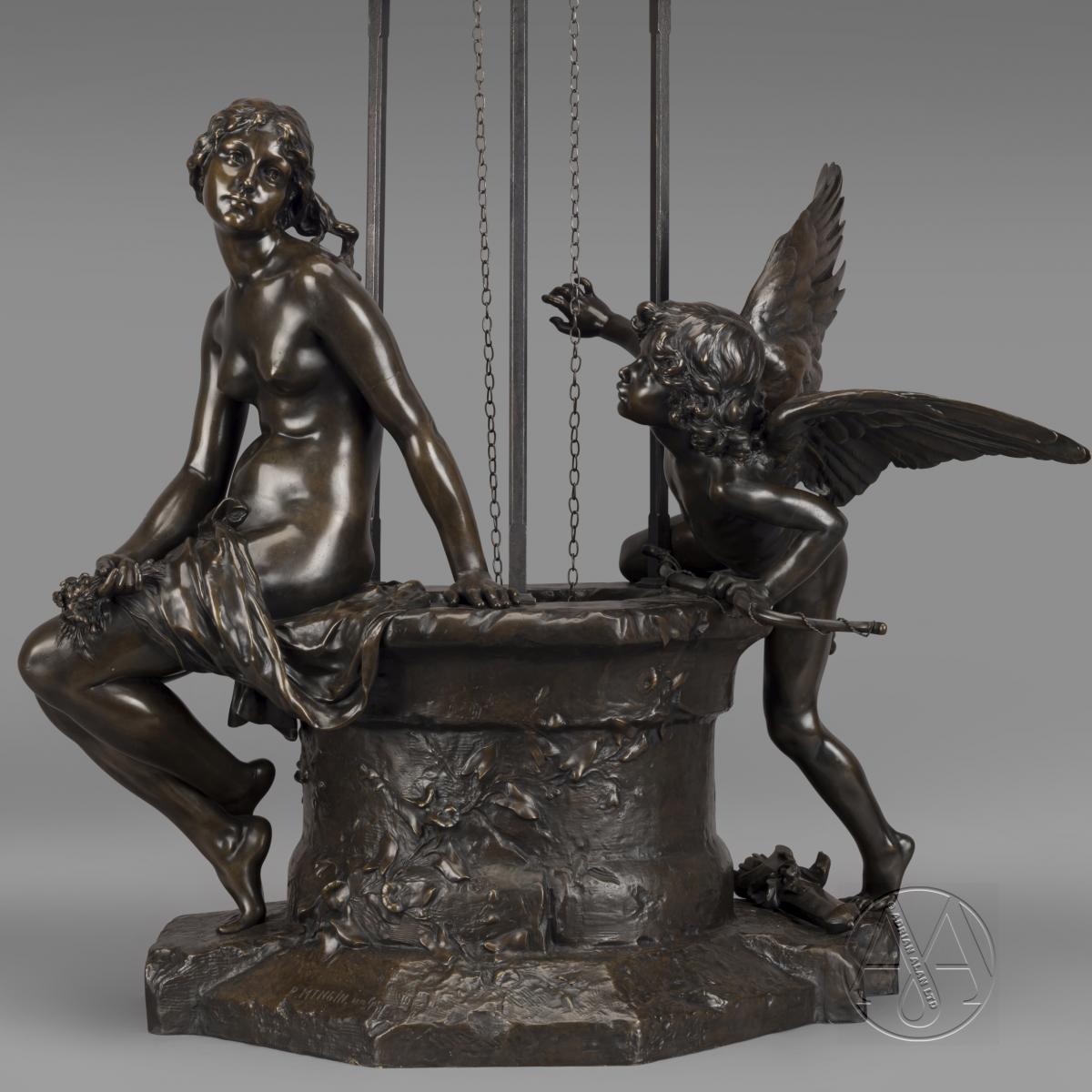 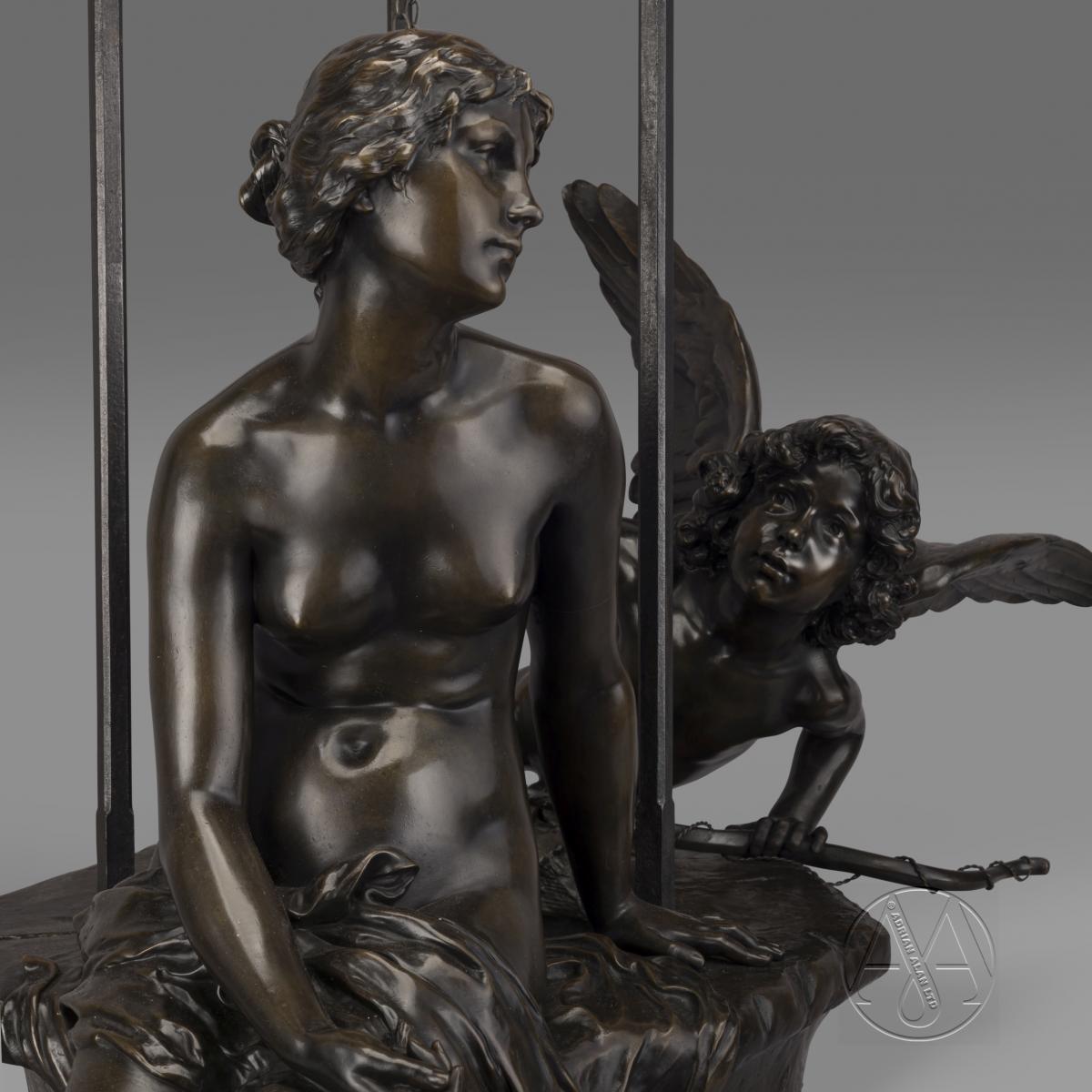 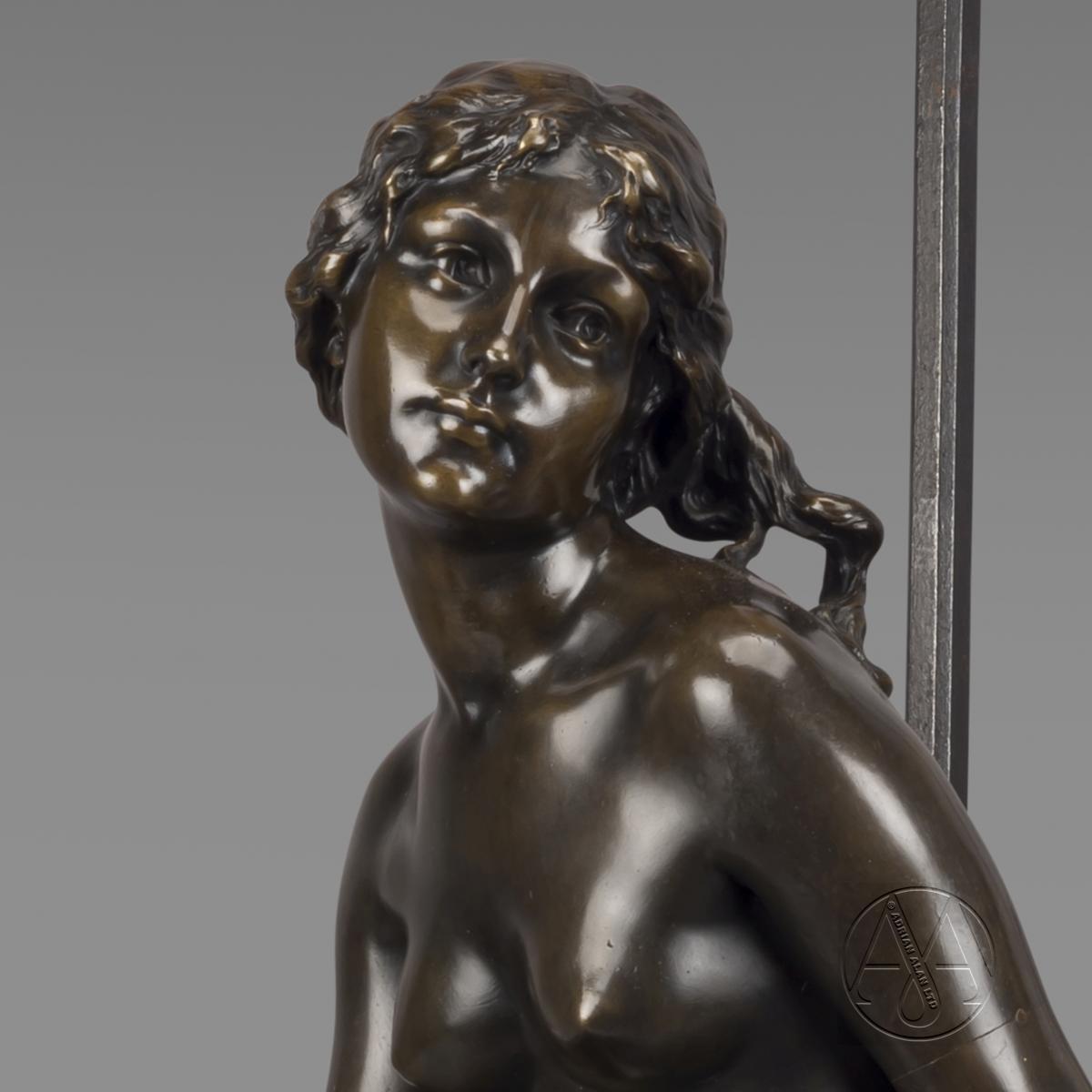 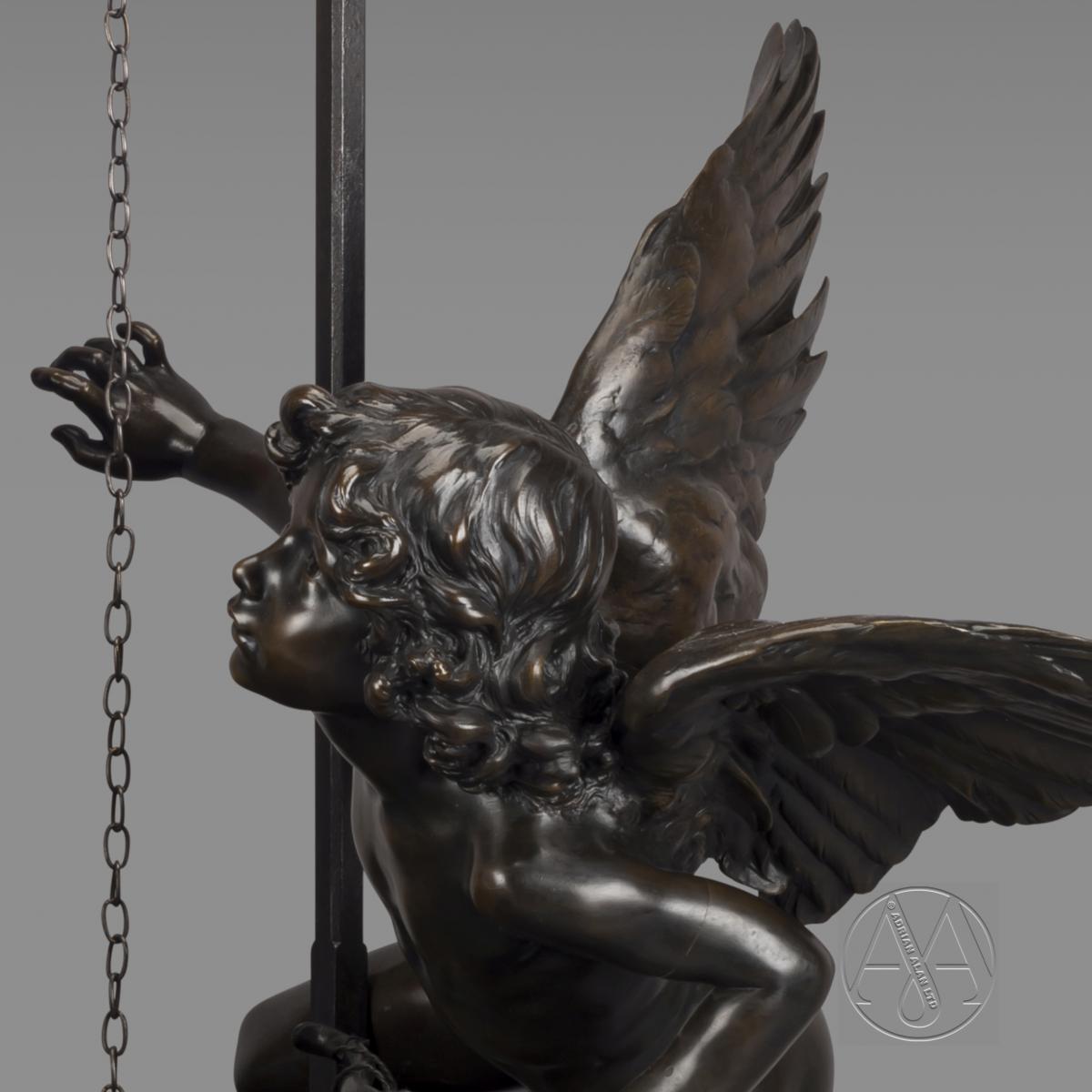 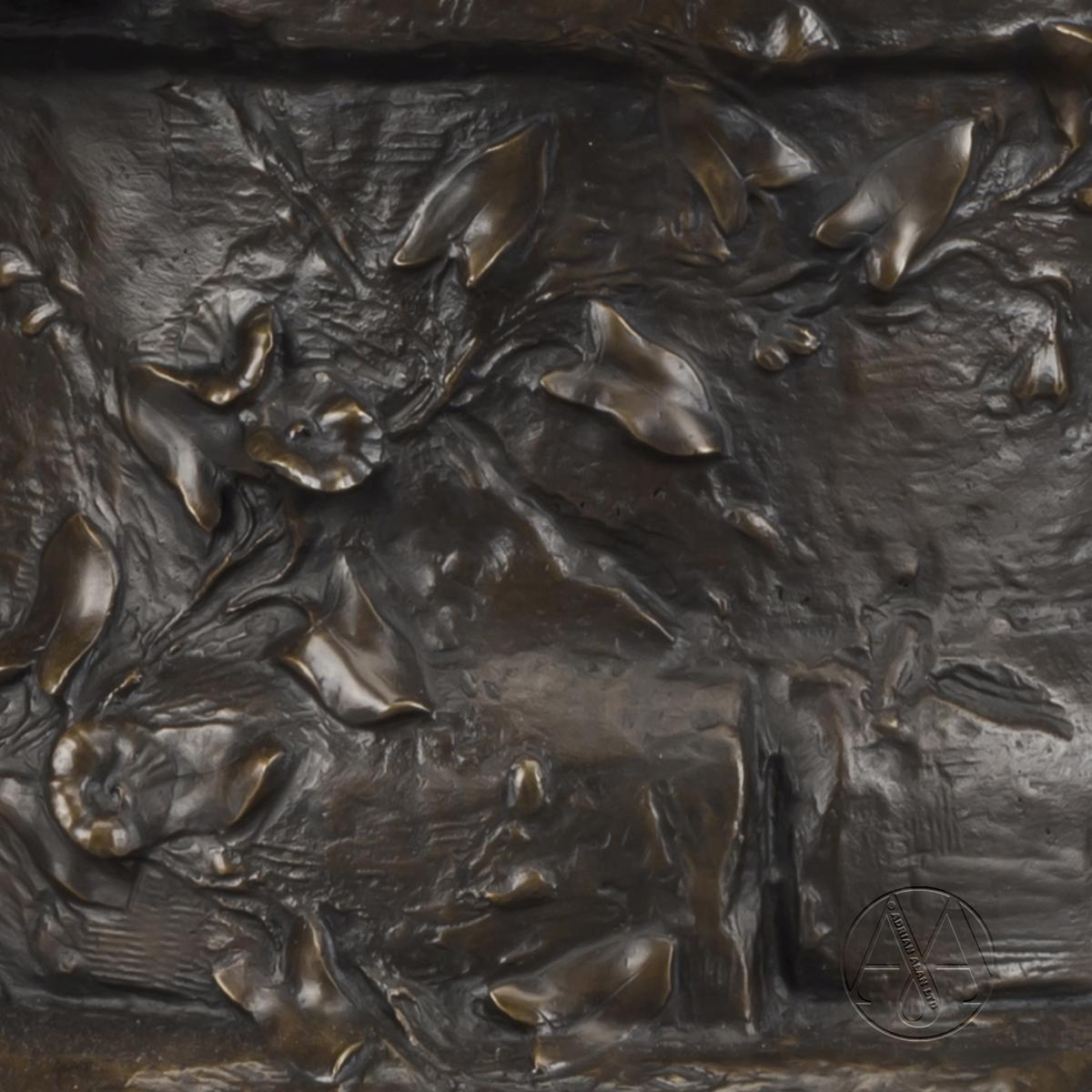 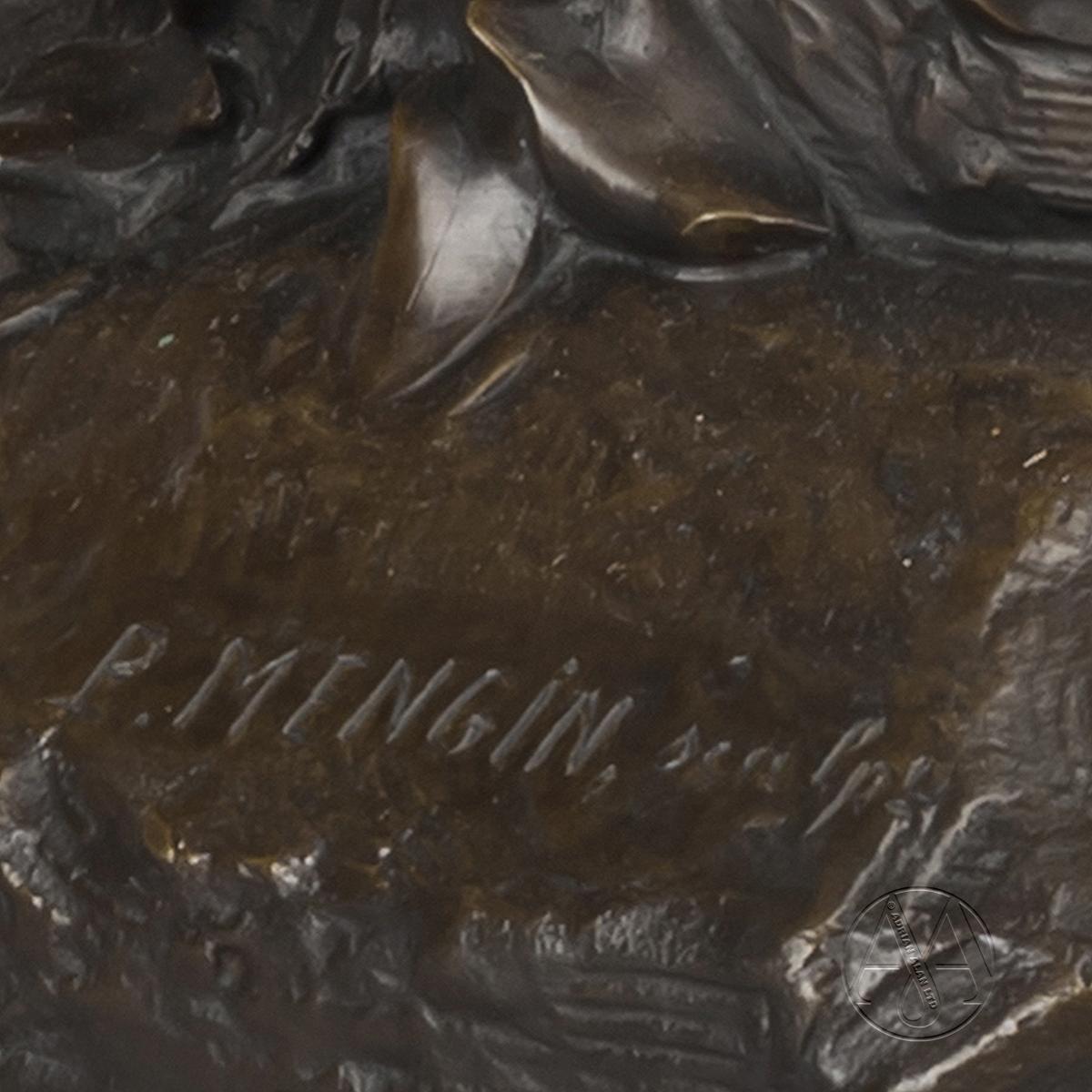 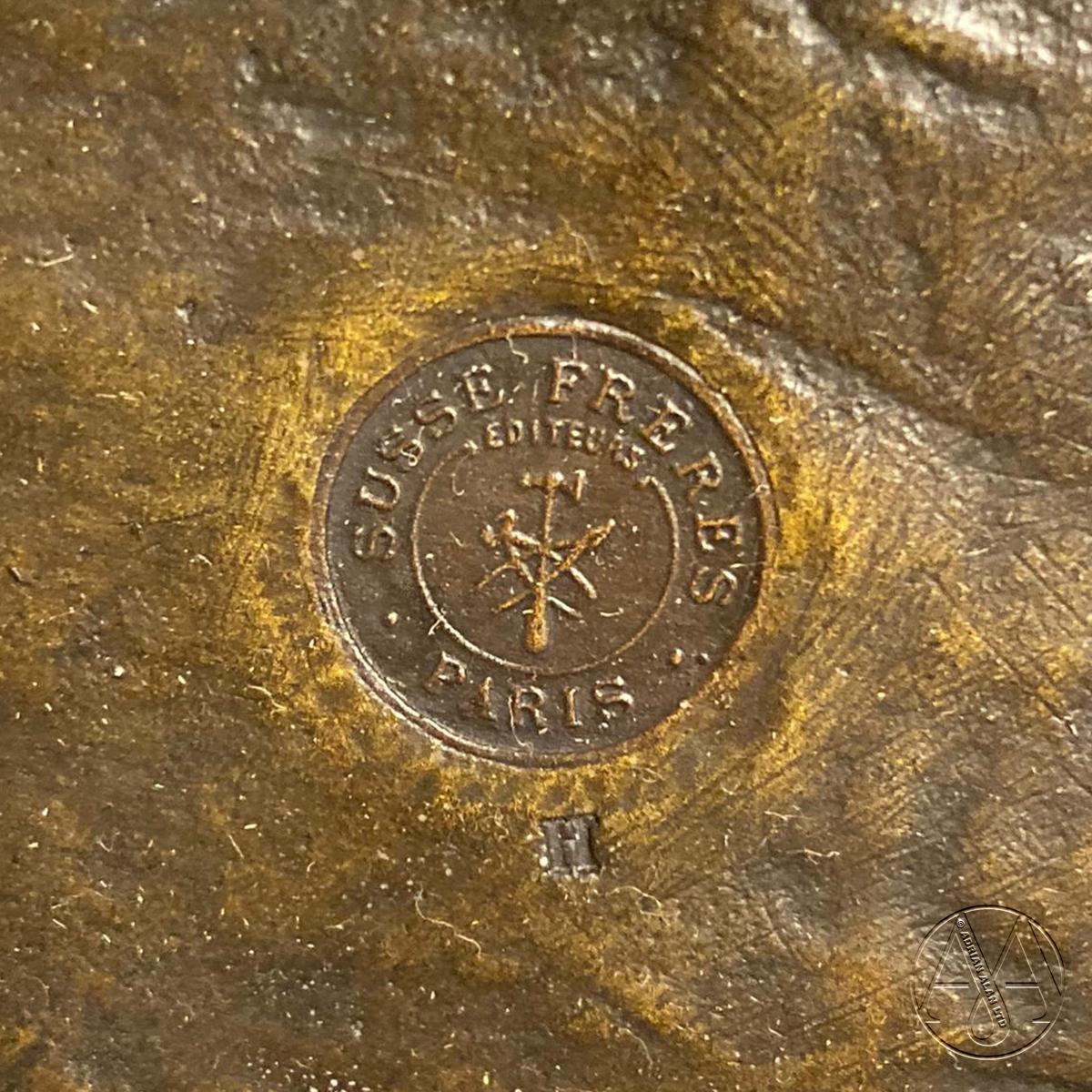 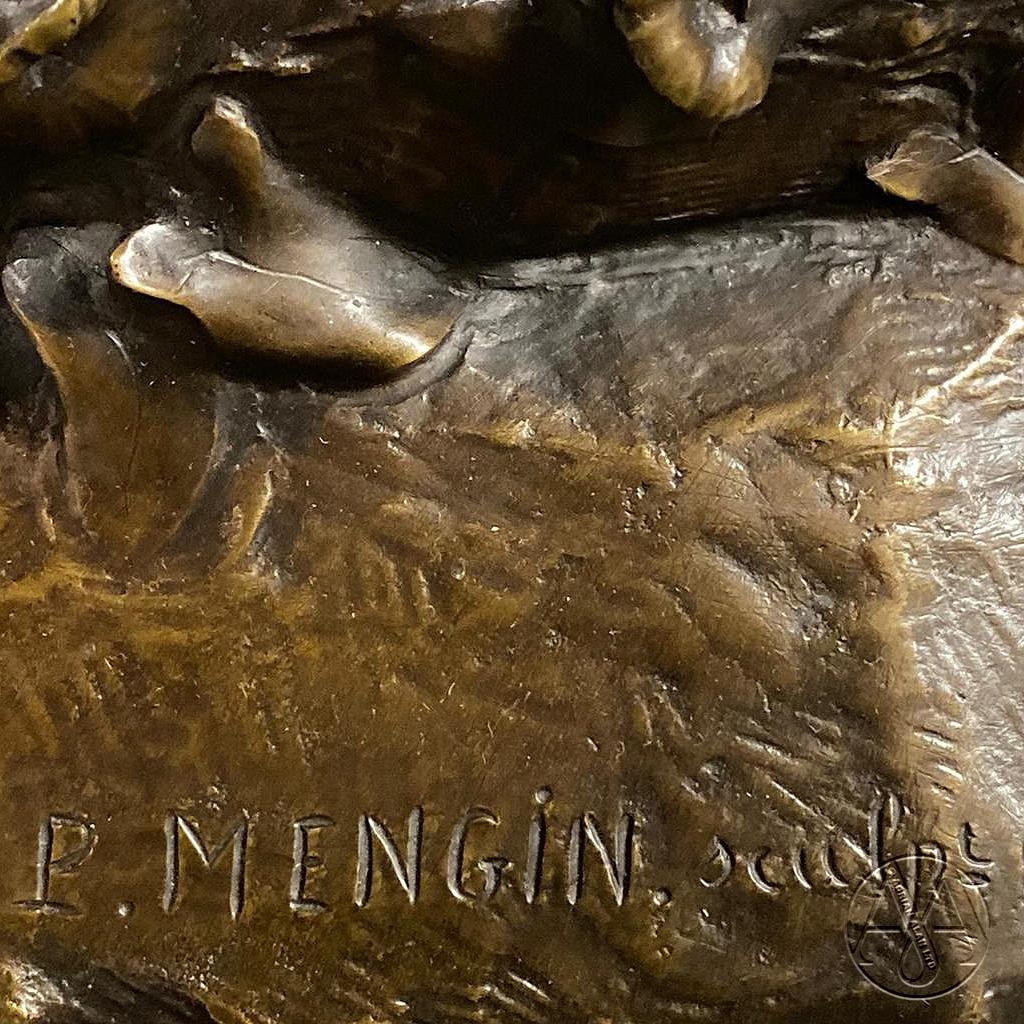 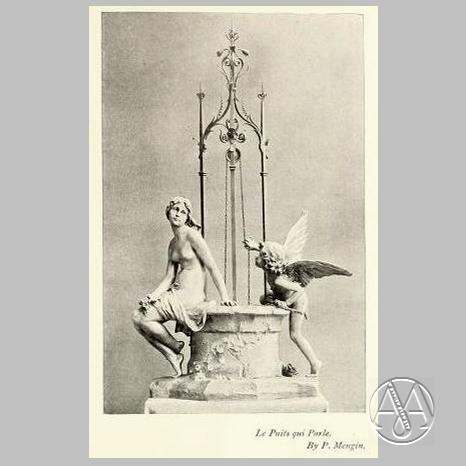 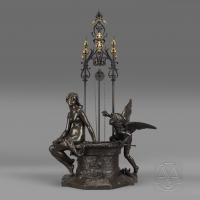 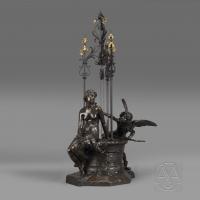 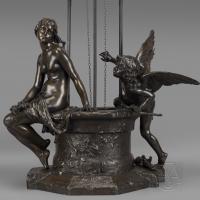 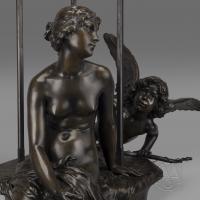 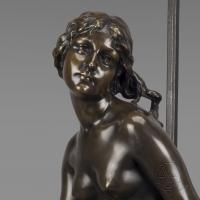 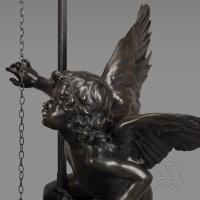 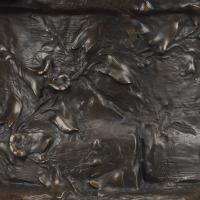 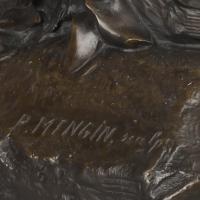 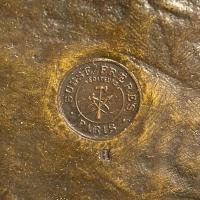 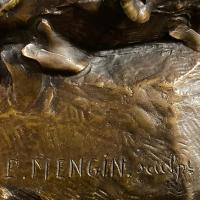 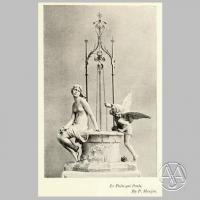 First exhibited at the Paris Exposition Universelle 1900, this exceptional patinated bronze group was edited in three sizes by the fondeur Susse Frères, with the current example being the largest at 147 cm.

The group is illustrated in the 'The Paris Exhibition 1900',d. D. Coral Thomsen, Art Journal, 1901, Vol 1; p.95.  This charming sculptural group continued to appear in Susse Frères printed catalogues of works until 1905.

Paul Eugène Mengin (1853-1937) was the twin brother of the painter Charles Auguste Mengin.

He studied under Dumont and Millet and first exhibited at the salon in 1873.

Specialising in animalier and figural groups he became a member of the Société des Artistes Français in 1884 and exhibited widely at the exhibitions of the period.  He received an honourable mention in 1877; a third-class medal in 1885; a travel scholarship in 1875 and a bronze medal at the Exposition Universelle in 1900.

Tracing its origins to 1758, the Paris foundry of Susse Frères  is one of the oldest art foundries in Europe.  They were appointed suppliers to Empress Marie Louise from 1812 and the Duc de Berry from 1818.  Following the 1830 revolution they were granted a Royal Warrant as an official supplier to the monarchy.   Originally a stationery company selling small bronze statuettes, the company began to focus on the process of bronze casting as early as 1839 under the direction of the brothers Michel Victor and Amedee  Susse.  They producing in that year a six-page catalogue of bronze sculpture.

In 1847 they obtained the right to use the Sauvage procedure for reduction, similar to that invented by Achille Collas and employed by Ferdinand Barbedienne.  The ability to produce reductions of large scale bronzes enabled Susse to create editions of work in various sizes and opened up the market to collectors.  Michel Victor Susse died in 1860 leaving Amedee as the sole director of the foundry until 1880 when Albert Susse became the director.

In the subsequent years Susse Frères obtained the rights to produce editions of the works of some of the most important French sculptors of the nineteenth century including:  James Pradier, Pierre-Jules Mêne , Auguste Cain , Pierre-Nicolas Turgenev , Yevgeny Alexandrovich Lanceray, Louis-Ernest Barrias , Jules Dalou , Alexandre Falguière and Mathurin Moreau.

Renowned for the quality of its casting and multipatinated finishes, the firm of Susse Frères exhibited with notable success at many of the great exhibitions of the nineteenth century including a prize medal at the 1851 Great Exhibition in London and a Grand Prix at the 1905 Lieges Exposition Universelle. 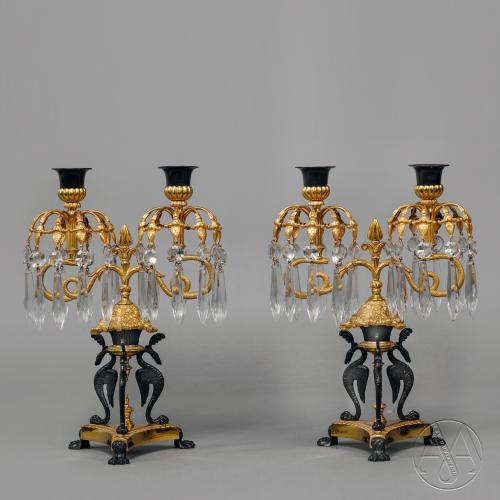 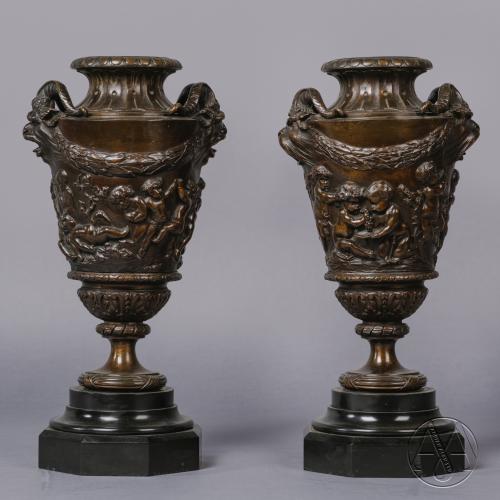 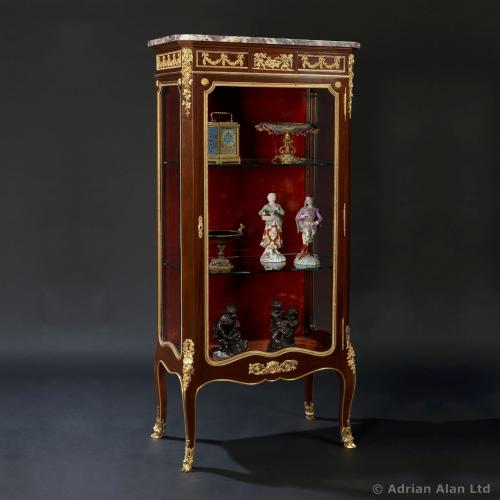 A Gilt-Bronze Mounted Mahogany Vitrine, the bronze by Picard
Adrian Alan
View all from this dealer