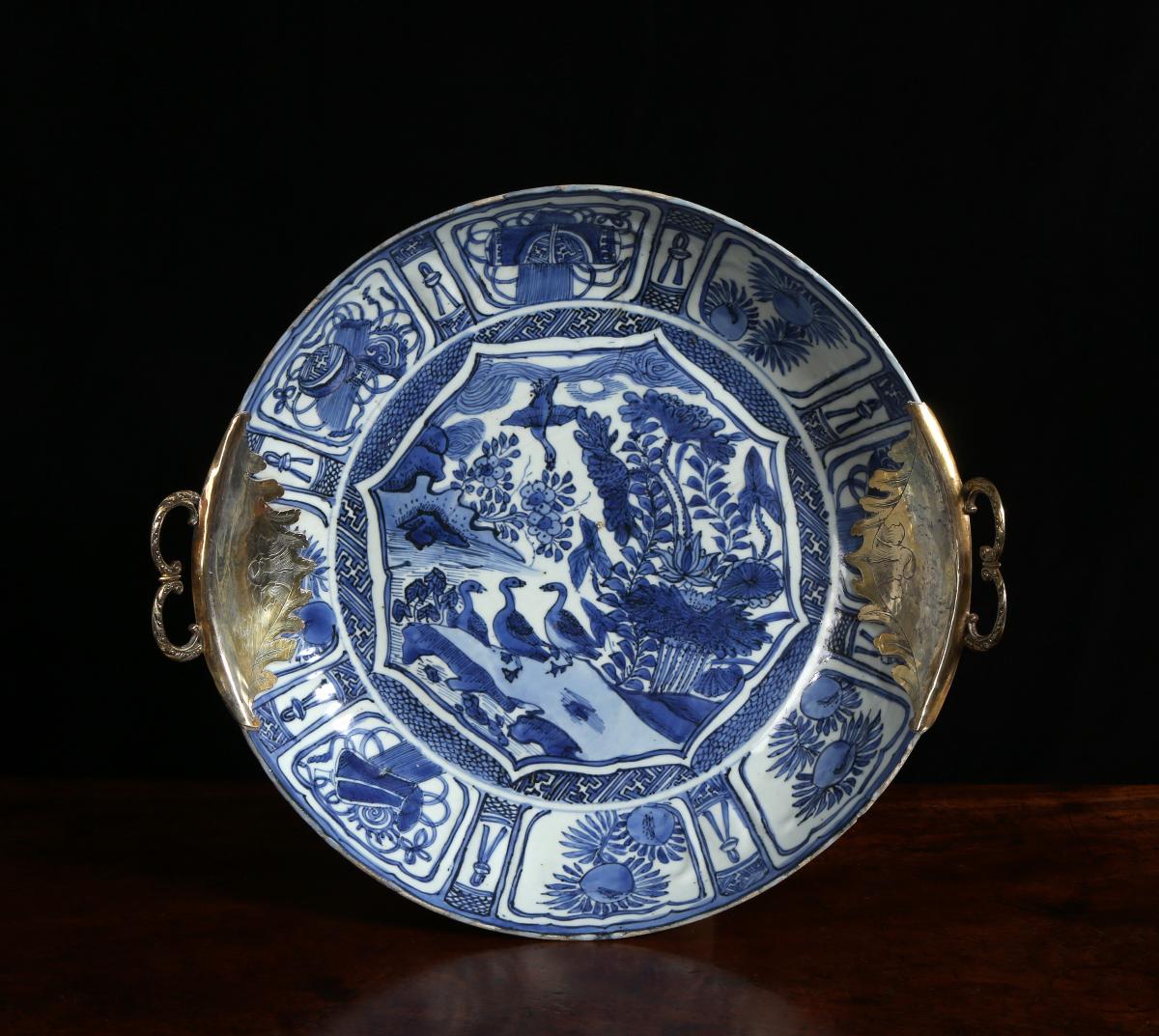 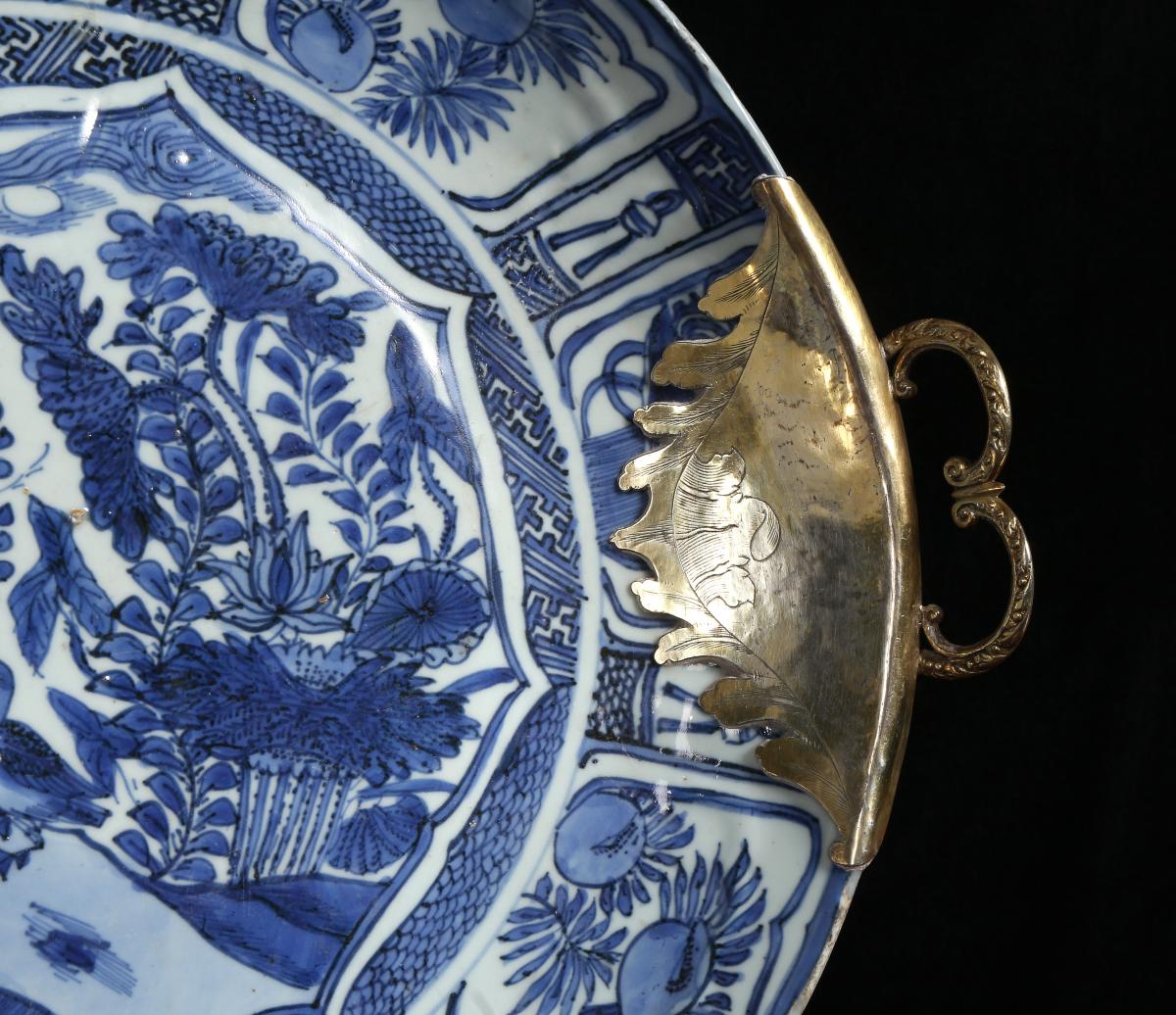 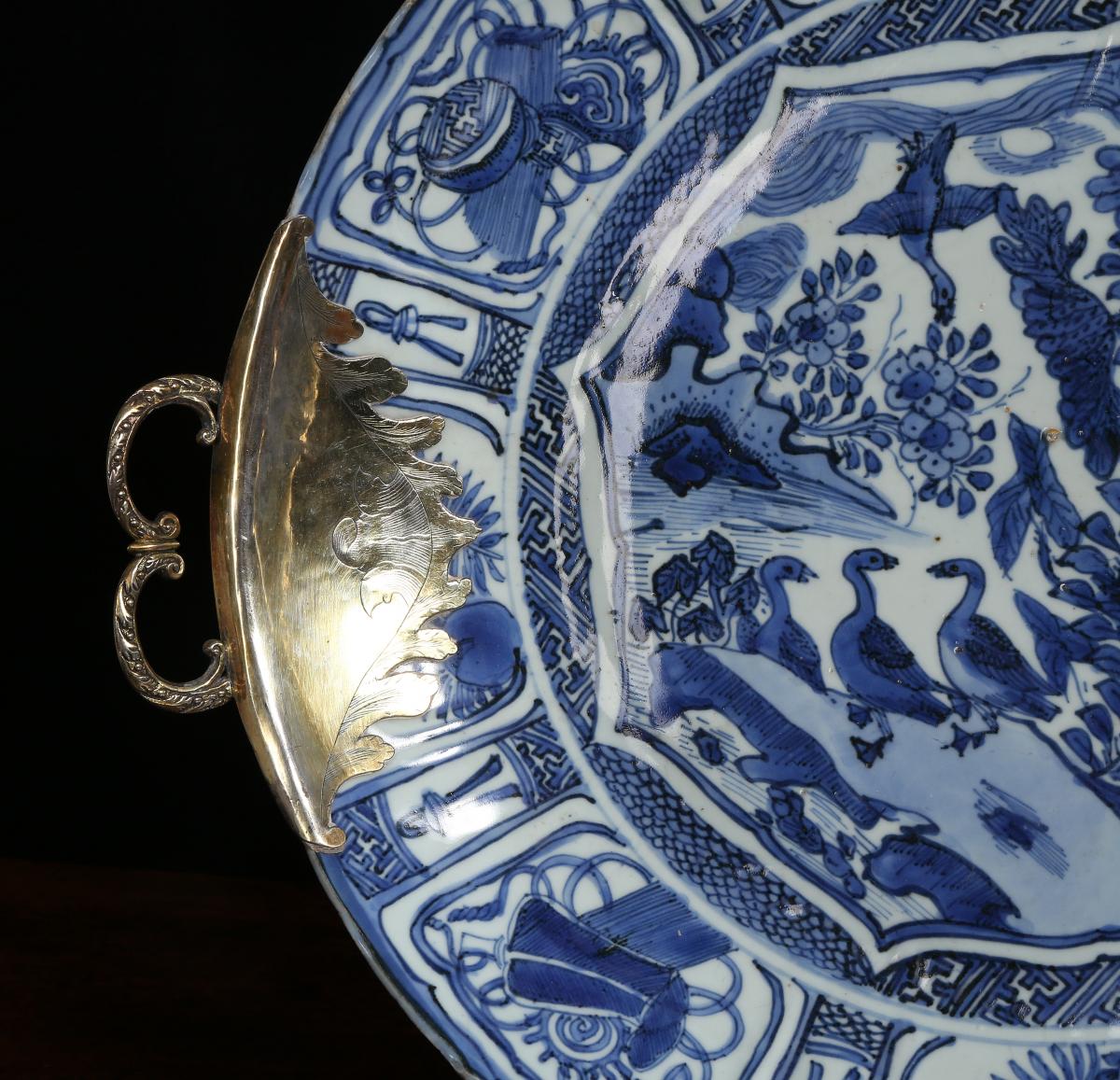 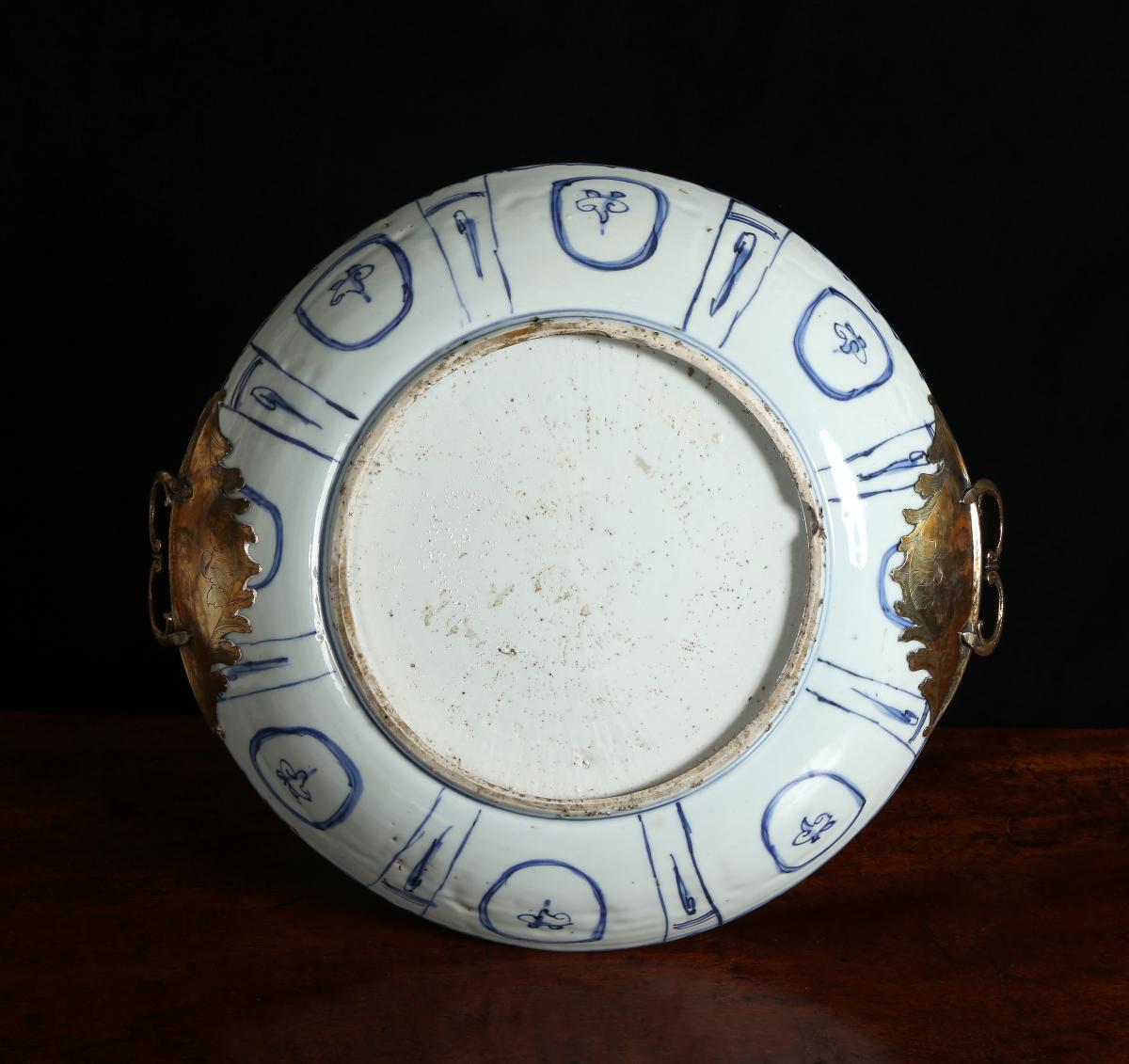 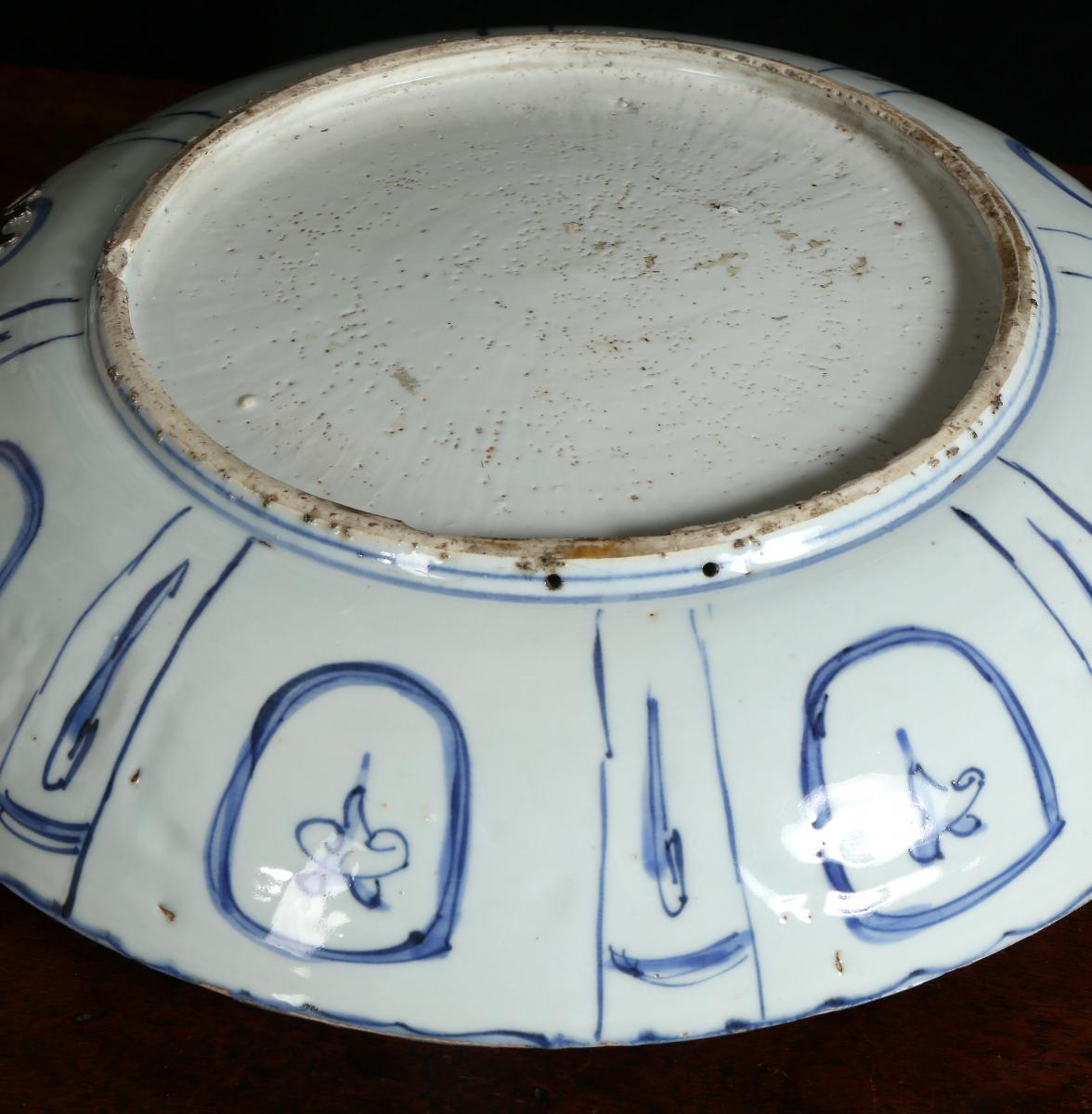 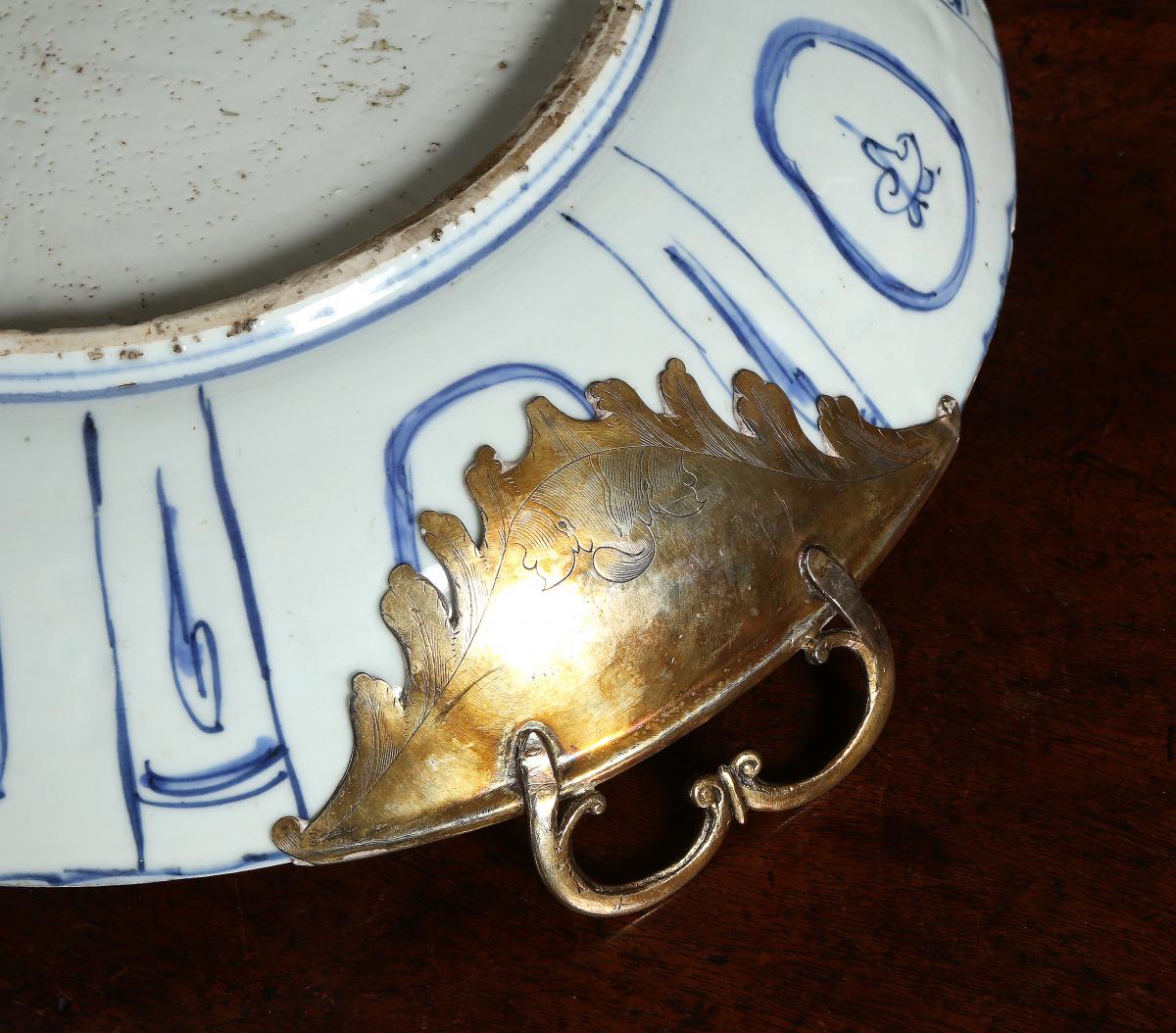 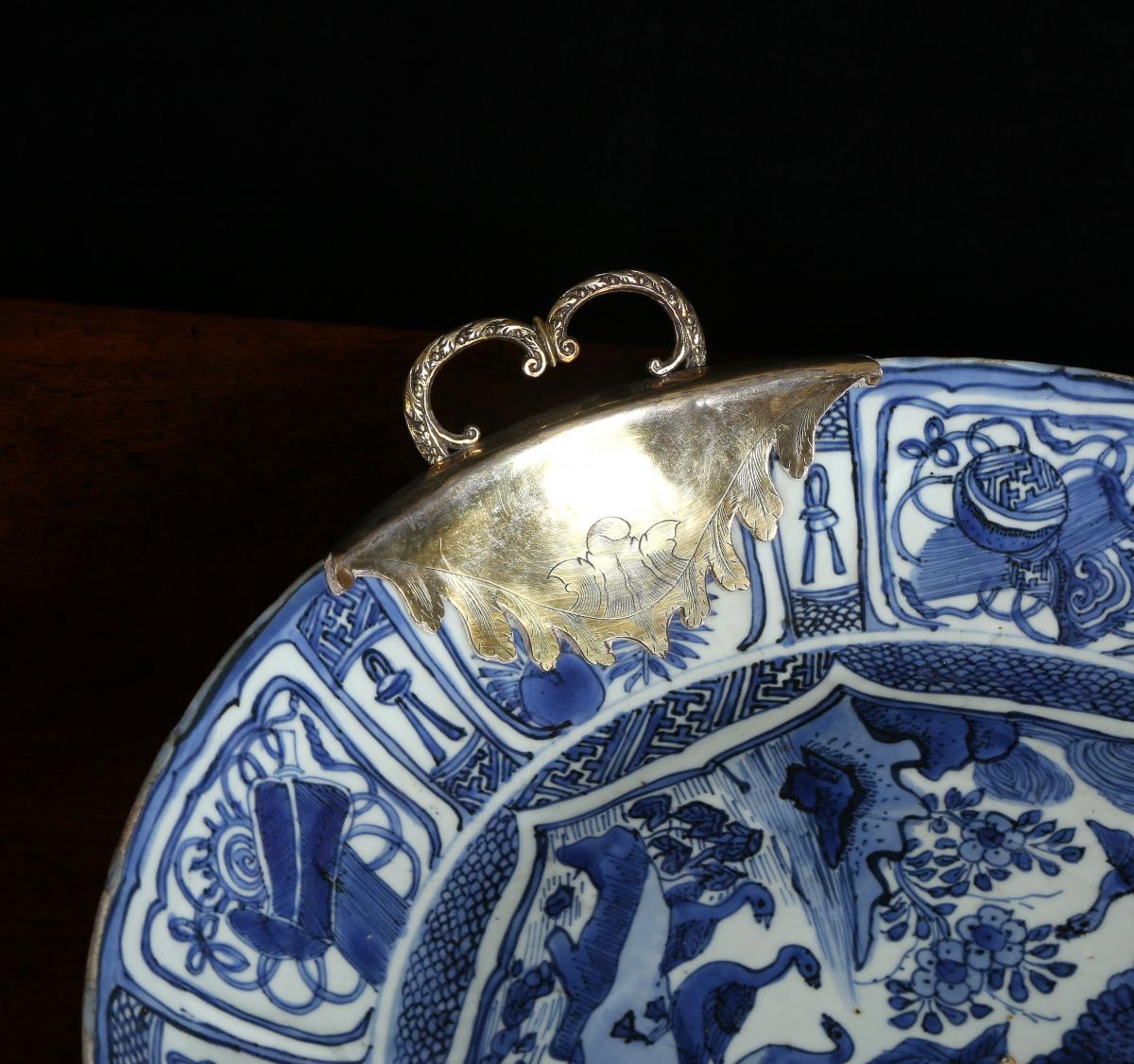 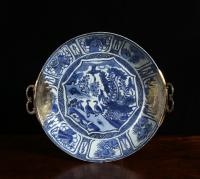 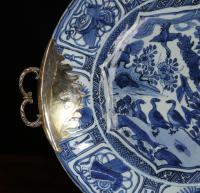 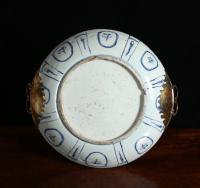 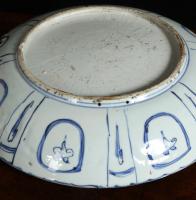 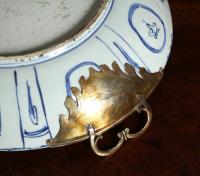 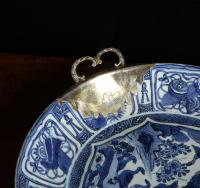 The mounts: unmarked, probably England (London), or possibly the Netherlands, or North Germany, second half of the 17th century

Chinese porcelain mounted with silver in Europe from the 17th century is rare. Such treasured porcelains from the East were sometimes mounted in precious metal to enhance their value and repurpose them for their own specific needs. The exuberant baroque flame–edged and engraved silver panels on the rim, enriched with a thin layer of gold, form the mounts to which the cast silver double–scroll foliate handles have been applied converting the dish to a tray.

Rather than being associated with dining it may have been used as a presentation tray or layette basket for fine linen baby clothes given to a new mother, which for grand English families were made in beadwork or silver, see an example of the latter, c. 1670, in the Victoria and Albert Museum.[1]

The dish is painted in layered tones of cobalt blue with three geese on rockwork and another in flight, beside lotus and other water plants. In the Wanli/Tianqi period, roughly 1575 to 1640, Kraak ware—immediately recognizable for its striking panelled decoration—became a truly global product. The name, Kraak, is associated with the Dutch word ‘carrack’ describing Portuguese galleons which distributed this porcelain throughout Asia, Africa, Europe, the New World and the Caribbean.[3]

The thinly potted porcelain itself is from a group identified by Marina Rinaldi as Border VII.2, notably without the ruyi–head motif separating the alternating scale and swastika–diaper patterns around the cavetto, and with hastily drawn lingzhi (sacred fungus) in eight oval panels on the underside divided by tassels and lines. Typically, it has the coarse kiln sand adhering to the foot rim.[4]

This group was produced in large quantities and similar examples have been found in the Dutch East–Indiaman Witte Leeuw (1613) which sank in the South Atlantic Ocean, near St. Helena, on its homeward bound voyage to Amsterdam, and the Hatcher junk (c.1643), an Oriental vessel wrecked in the South China Sea possibly chartered by the Dutch East India Company. The painting on our dish is particularly well executed and is similar in style to those depicted in a row above the panelling in the frequently cited Interior in a Dutch Home, possibly West Frisian, c. 1630–35, in the Musée d’art et de histoire, Geneva, as well as a number of Dutch still lives executed in the 1640s.[5]

This important unpublished dish, joins a significant list of Kraak wares mounted in precious metal in England, Northern Germany and the Netherlands, of which the most impressive are the suite in the Metropolitan Museum of Art, formerly at Burghley House (44.14.1–5).[6] 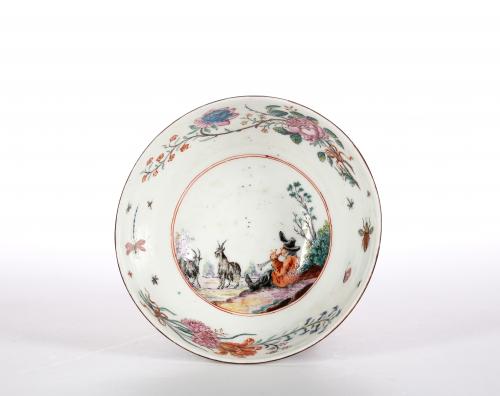 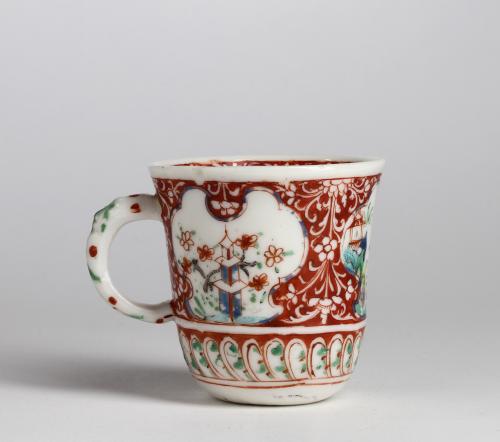 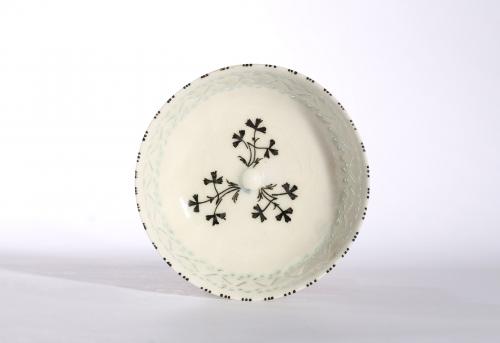 A Safavid Gombroon Bowl, Iran
E & H Manners
View all from this dealer