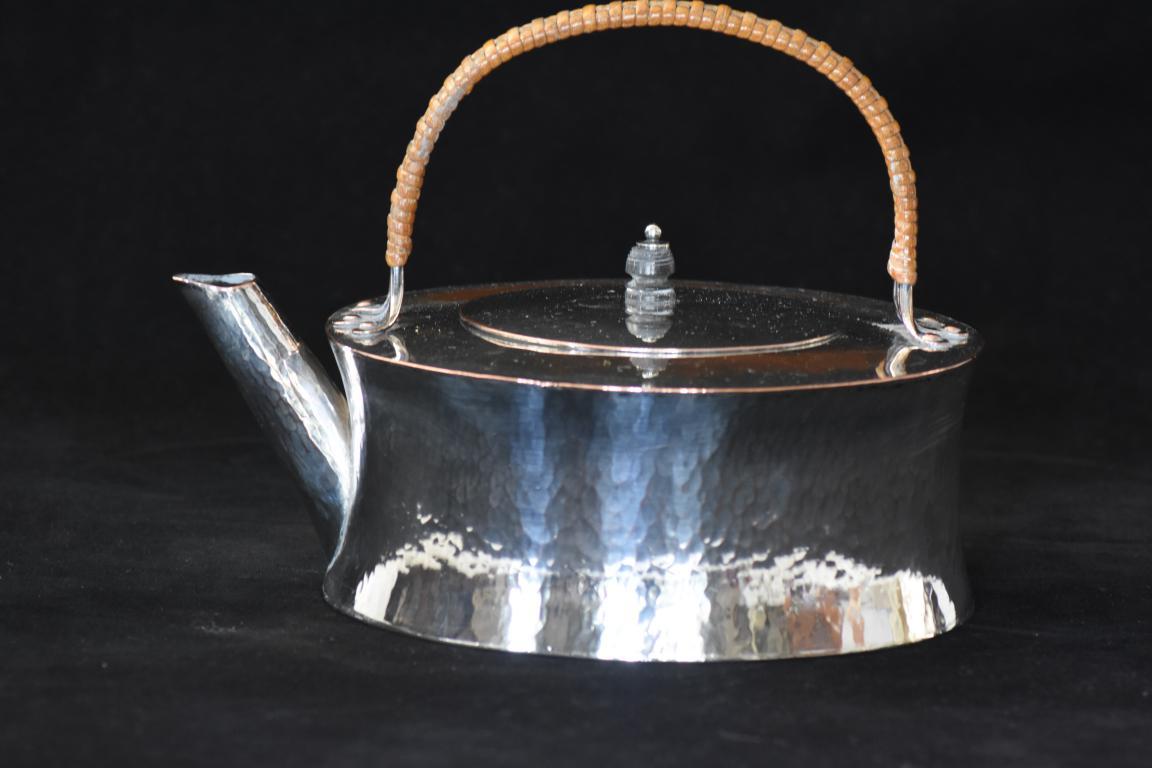 A rare Arts and Crafts silver plate on copper kettle with wickerwork handle from the Keswick School of Industrial Arts. Beautifully planished this is a charming piece of Arts and Crafts metalware. Marked KSIA to the base

The conditions imposed for attending the class were that each man should be locally born and lead a temperate and steady life.

‘The Aim of this school is to find remunerative employment for working men and others, in spare hours, or when out of work, by teaching them such art industries as can be profitably carried out in their own homes’.

The KSIA joined the HAIA in November 1884 at which time it had 30 memers aged between 15 and 50. Unlike the other metalwork guilds within the HAIA the KSIA also exhibited at the Arts and Crafts Exhibition Society’s exhibitions.

In 1894 the KSIA moved into its purpose built workshops on Lake Road, on the front of the building is the motto ‘The Loving Eye and Patient Hand Should Work With Joy and Bless This Land’.KSIA produced high quality and well designed wares in copper, brass, pewter, stainless steel and silver.

Much work in silver was produced for churches throughout the land. In the 1930’s a large part of the Schools work was made in ‘Firths Staybrite’ a form of stainless steel which for a long time was very successful.

As well as everyday items stainless steel jewellery was also made inspired by Norse designs in the late 1960’s.Apparently every article made at the School was stamped with the school mark, with nothing been allowed to be sold by individual members.

However pieces are seen which are attributable to KSIA (as they are to the same design as stamped pieces) unmarked and others are seen with the stamp of W H Mawson and E Harrison.