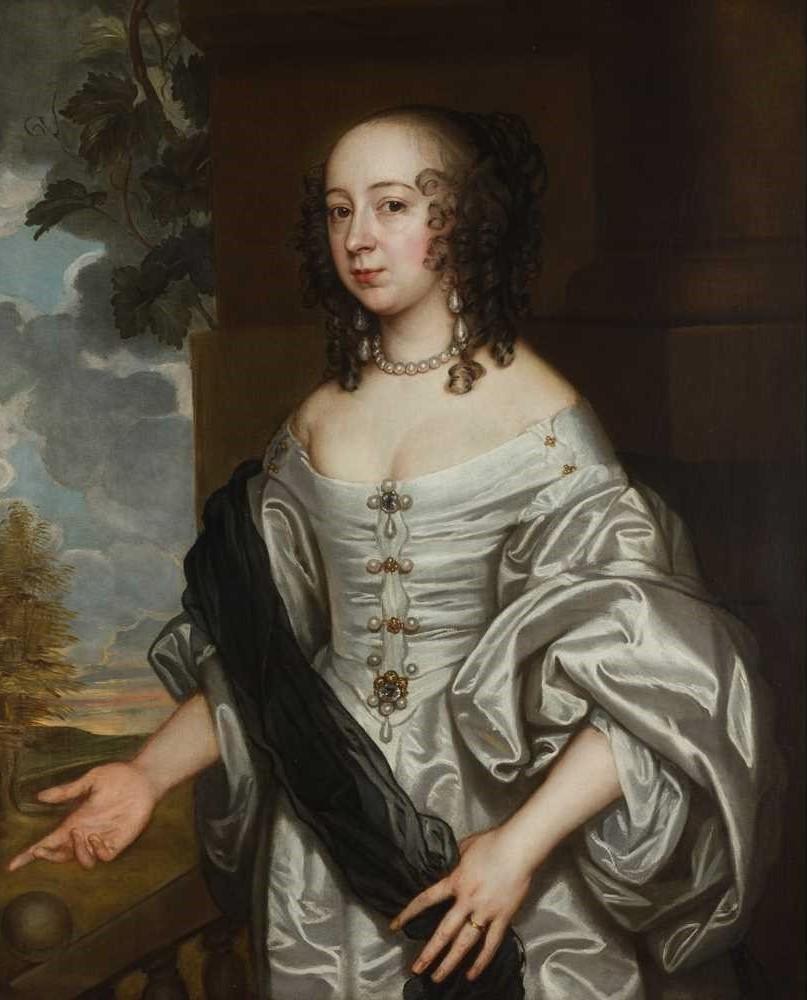 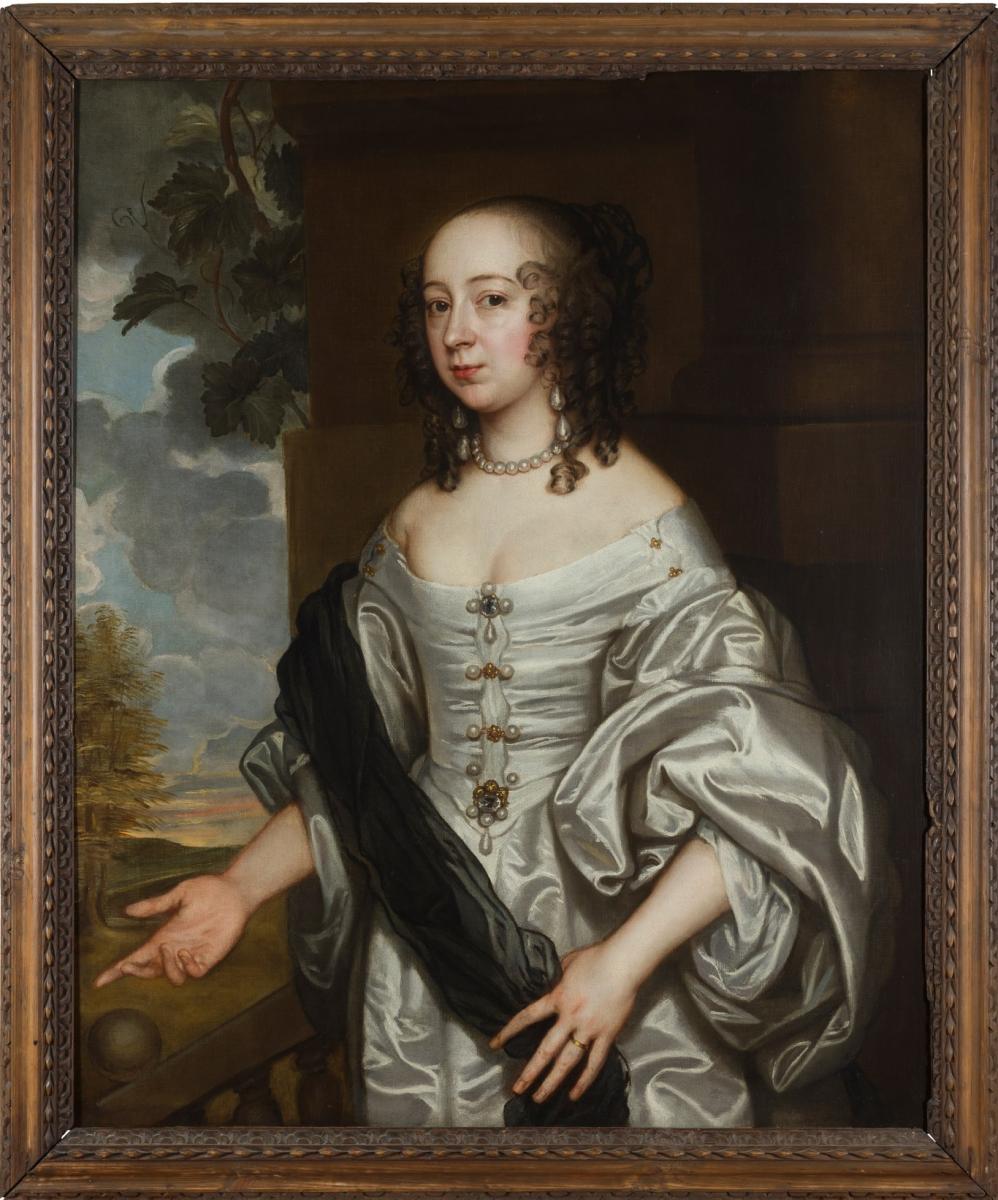 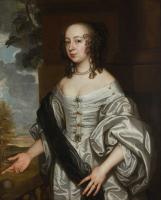 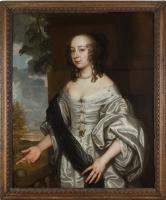 Portrait of a 17th century lady, three-quarter length, in an ivory silk gown standing on a garden terrace.
The lady, painted circa 1670, gestures with her hand towards the gardens and land beyond off her country estate, wearing a sumptuous ivory silk gown adorned with pearls and precious stones and pearl earrings and necklace, signaling her wealth and status. She wears a ring on her left hand, which combined with her pale gown possibly alludes to her recent marriage. The portrait is signed with the initials 'JG' to the right within a lower fold of her dress.

John Greenhill was a highly skilled and talented painter whose life and career were cut tragically short. He was born in Salisbury circa 1644 and was the son of John Greenhill, a merchant and later the local registrar and Penelope Champneys of Orchardleigh, Somerset. Greenhill's early artistic training is unknown but it is believed his first portrait was of his uncle, James Abbot of Salisbury. He moved to London in 1662 and became a pupil of Sir Peter Lely, court painter to Charles II. At the start of his career, Greenhill was hard working and ambitious and according to George Vertue was considered to be 'the most excellent of Lely's disciples'. His style was clearly influenced by Lely and Van Dyck and he progressed rapidly to leave and form his own studio.

Although he painted a variety of sitters such as James Duke of York (Dulwich Picture Gallery) and John Locke and Anthony Ashley, earl of Shaftesbury, he greatly enjoyed being at the heart of the Covent Garden theatre scene and the company and social life surrounding it and painted a great many playwrights, actors and their circle. He painted in oils but also produced a great many sketches and drawings in chalk which had become very popular at the time.

According to the diarist George Vertue, this led Greenhill to lead what he described as a 'dissolute' lifestyle and on May 1676, while returning home one evening drunk from the Vine Tavern, he fell into the gutter in Long Acre, was carried home to his lodgings in Lincoln's Inn Fields and died the same night, aged only 31. He was buried in nearby St Giles-in-the Fields. He had married young and Peter Lely gave his widow and young family an annuity to live on.

Greenhill is recognized for his skill and talent in portrait painting and his early death make the few existing portraits that he produced extremely rare. He was described in an epitaph written by his friend, the writer and actress Aphra Behn as 'The famous Greenhill'. Another writer, Bainbrigg Buckeridge, wrote in his 'Essay towards an English school' of 1706 that had he not died young, the effect of his too free living, England might have boasted a Painter who according to his beginnings, could not have been much inferior to the very best of Foreigners... whom we have always so much encourag'd in the portrait way. 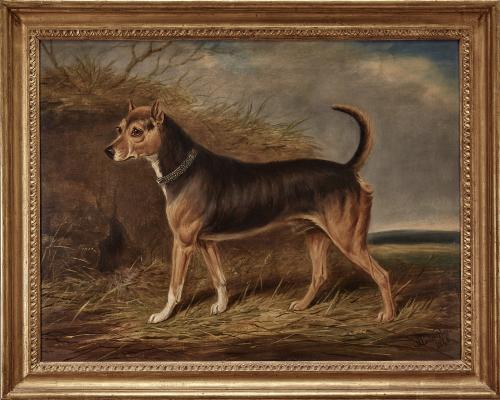 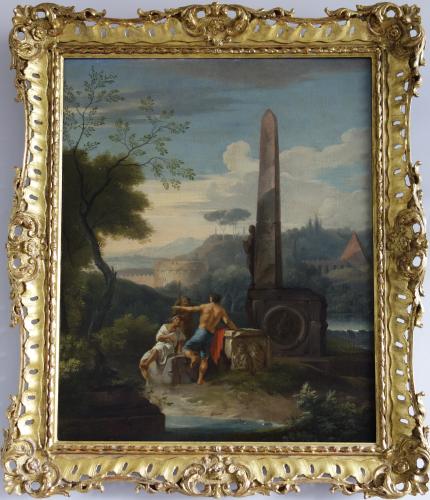