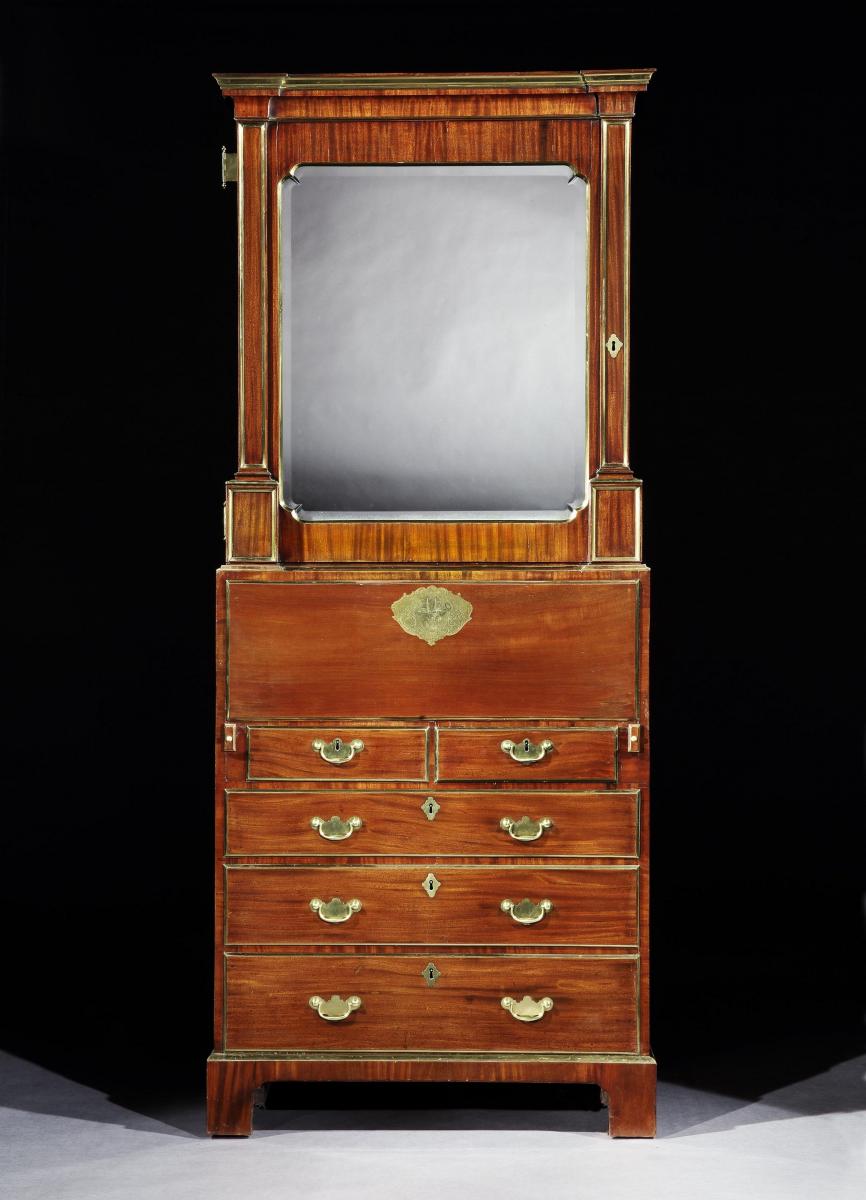 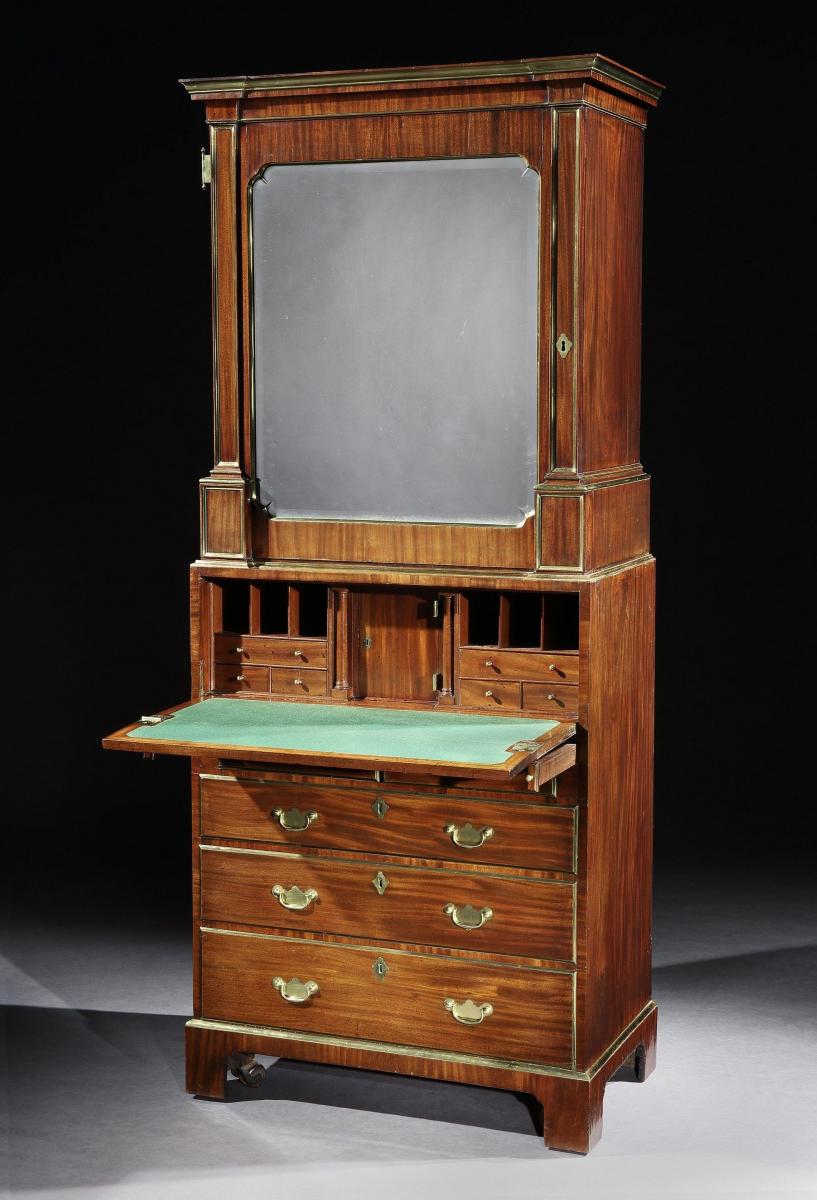 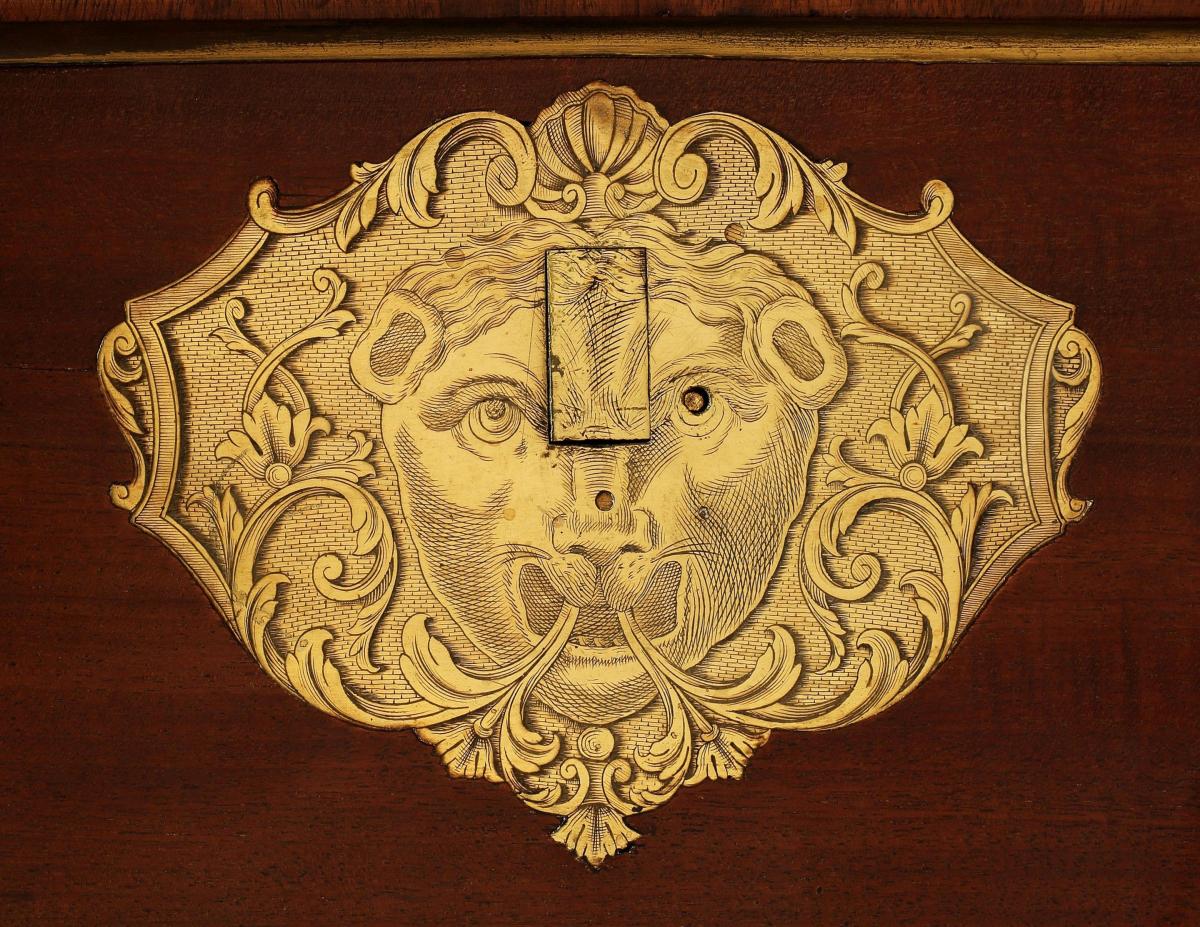 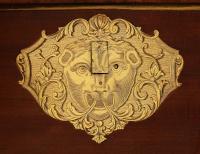 The lower section with folding baize-lined flap mounted with an escutcheon engraved with a panther-mask within an acanthus-filled cartouche, enclosing a fitted interior with three drawers and pigeon-holes around a door flanked by pilasters, enclosing three further drawers, above two short and three graduated long drawers, on bracket feet.

This cabinet with its richly figured veneers features distinct decorative features associated with the work of John Channon. Possibly of Huguenot origin, Channon came from a family of cabinet-makers from Essex. He established his business in London in 1737 in St Martin’s Lane and achieved great popularity during the reign of George II with prominent patrons. Channon is the attributed maker of the ‘Murray’ bureau at Temple Newsam House, Leeds and the ‘Beckford’ bureau-dressing-table, one of a pair, at the Victoria and Albert Museum.

John Channon was not known in the cannon of furniture history until the second half of the twentieth century. Noted furniture historians, including R. W. Symonds, identified the incredible quality of a group of, specifically brass-inlaid, furniture, but identifying a cabinetmaker eluded them at the time. John Hayward, the Deputy Keeper of the Department of Furniture at the Victoria and Albert Museum can be credited with the discovery of Channon’s workshop and production as published in the Victoria and Albert Museum Bulletin in 1965-66. In his research, Hayward explored the possibility that the brass mounts could have been supplied by other craftsmen, particularly those with Continental training. Broadly speaking, brass-inlaid furniture tends to display Continental characteristics and a particular resemblance to Germanic decoration of the time. This association suggests the involvement of German immigrant craftsmen, and Abraham Roentgen, famed for his brass-inlaid work, is a leading contender as he was working in London in the 1730s.

Designs for such detailed brass ornamentation would have been published in London and readily available in print shops in Great Newport Street and the Strand, adjacent to St Martin’s Lane. Notable examples include Gaetano Brunetti’s Sixty Different Sorts of Ornament (1732), B. Toro’s Masks and Other Ornaments (1745), and P. Babel’s A New Book of Ornaments (1752)

One of the notable features of this cabinet is the scrolled cartouche-escutcheon, which is elaborately engraved with a fabulous panther mask surrounded, fountain-like, by scrolling Roman-acanthus foliage, which recalls the engraved ‘arabesque’ ornament published by French ornamentalists such as Jean Berain and Daniel Marot. This escutcheon features a hinged hidden key-hole cover, which can be released by a concealed spring. This feature can also be seen on some of Channon’s other sophisticated pieces.

John Gilbert and Tessa Murdoch illustrate the lock-plate in their 1994 article on Channon and draw the connection between the lock-plate’s design and the engraving on silver attributed to Ellis Gamble, William Hogarth’s master. This type of secretaire-cabinet was known at the time as ‘A Lady’s Closet’ or a ‘Lady’s chest. These pieces featured a lower section in the form of a chest of drawers with a cabinet of lesser depth atop it with a single door with a plate of mirrored glass.

Unusually, the door to the upper section of the cabinet is hinged to the right rather than the left, which is typical of French clocks of the period.

John Freeman (c. 1689-1752) was an amateur architect and antiquarian. He inherited Fawley Court, Buckinghamshire in 1707 from his uncle, William Freeman. The house stands on the banks of the River Thames just north of Henley-upon-Thames. Freeman furnished the residence in 1720 with classical antiquities acquired from the Arundel collection of marbles. He also built a Gothic folly on the grounds to display this antiquities.