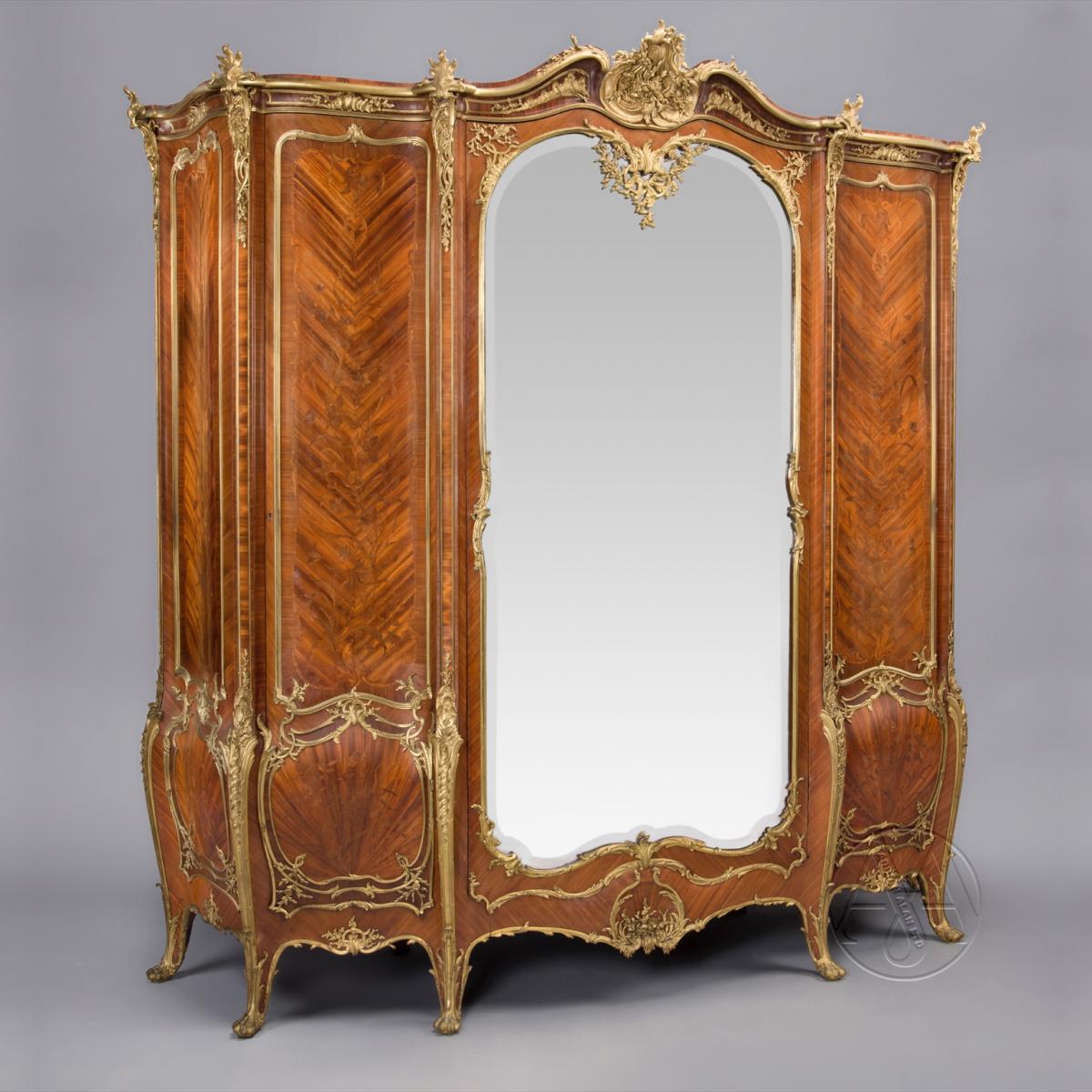 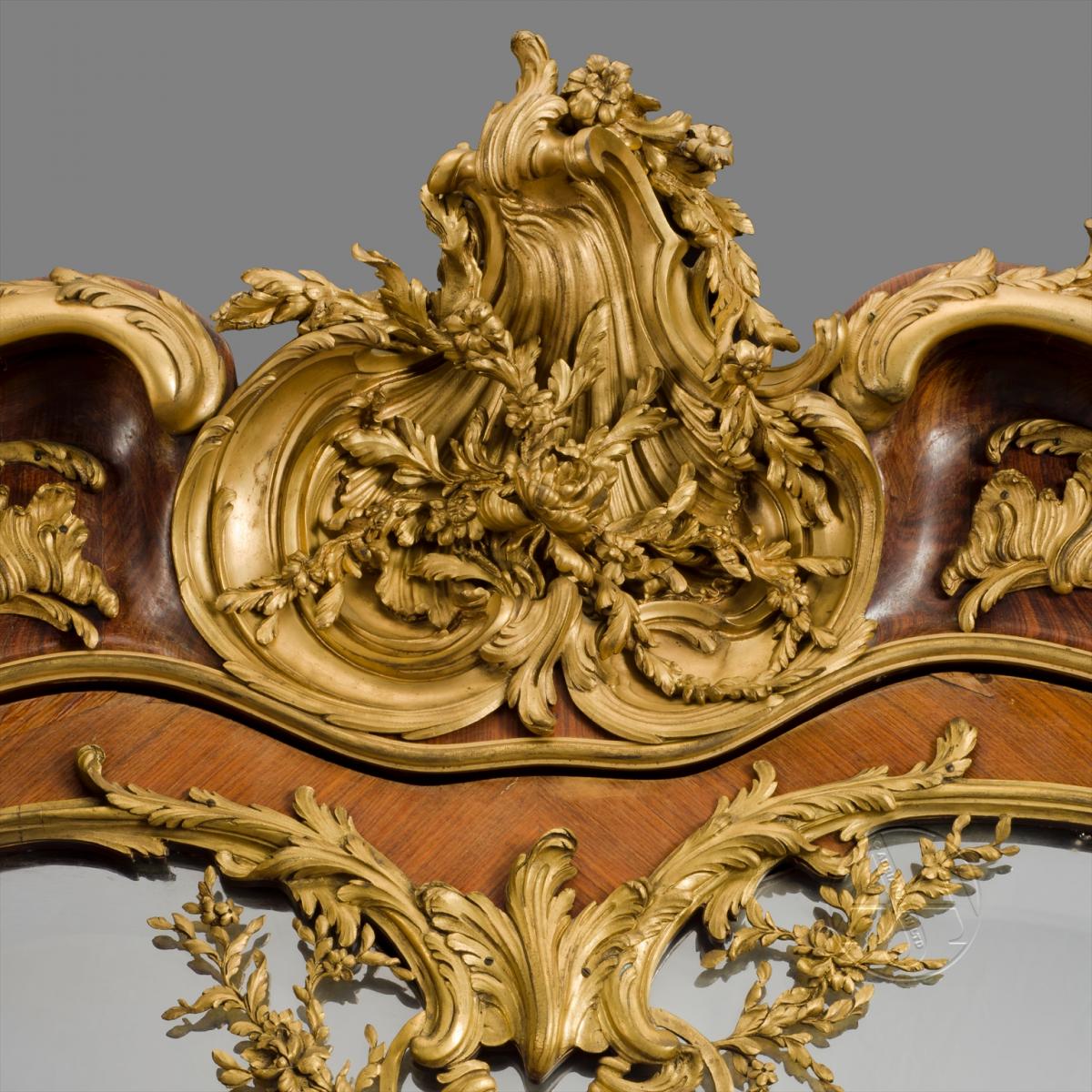 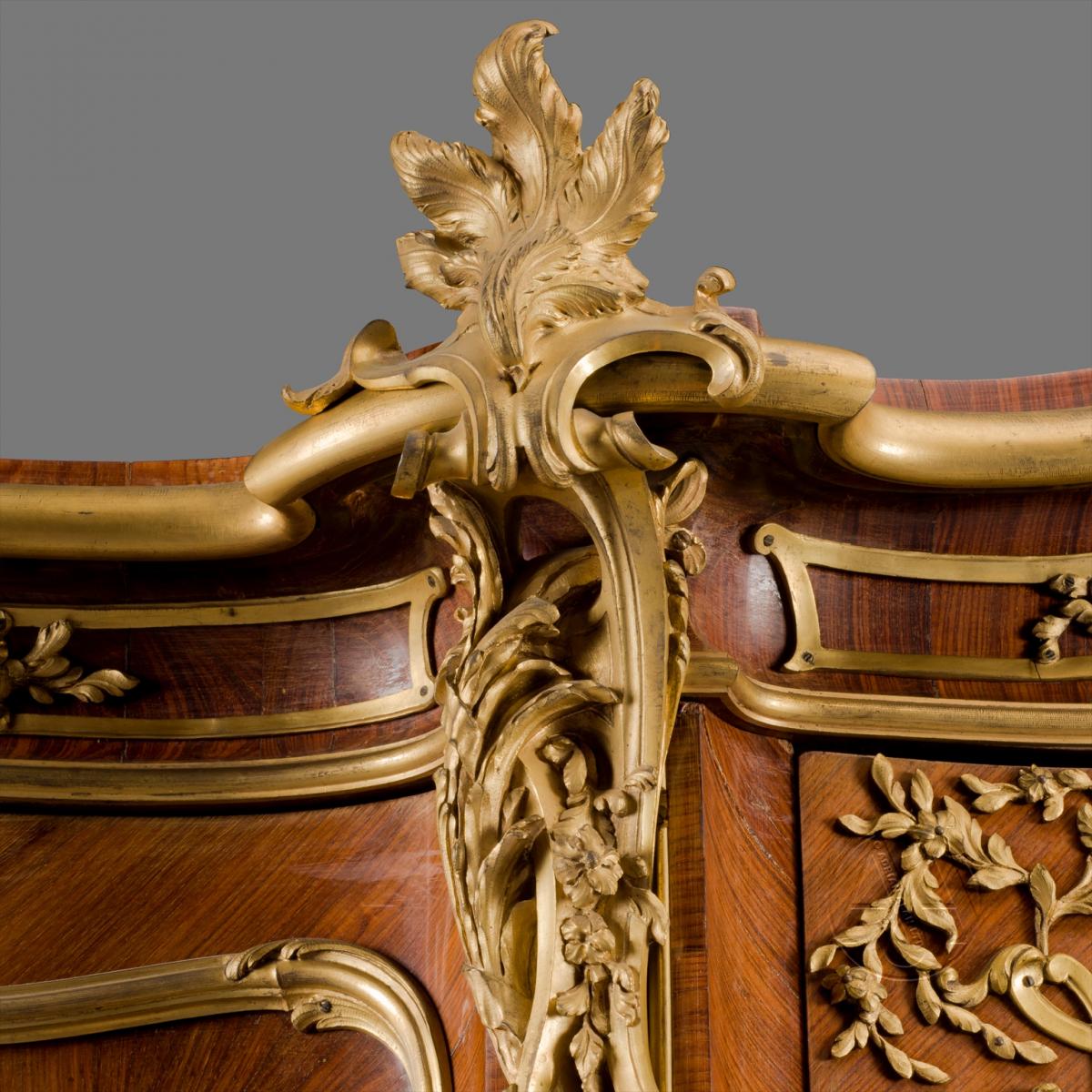 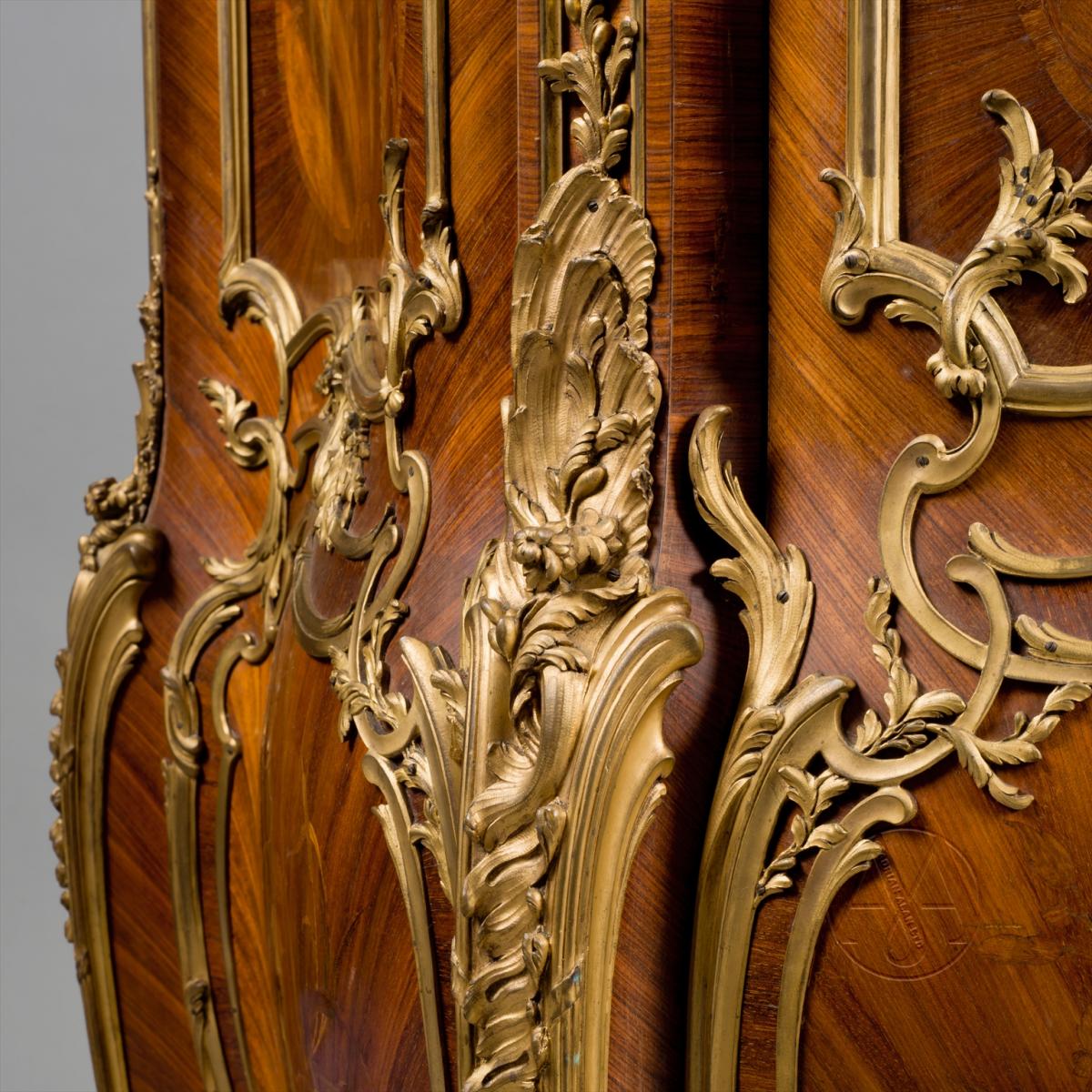 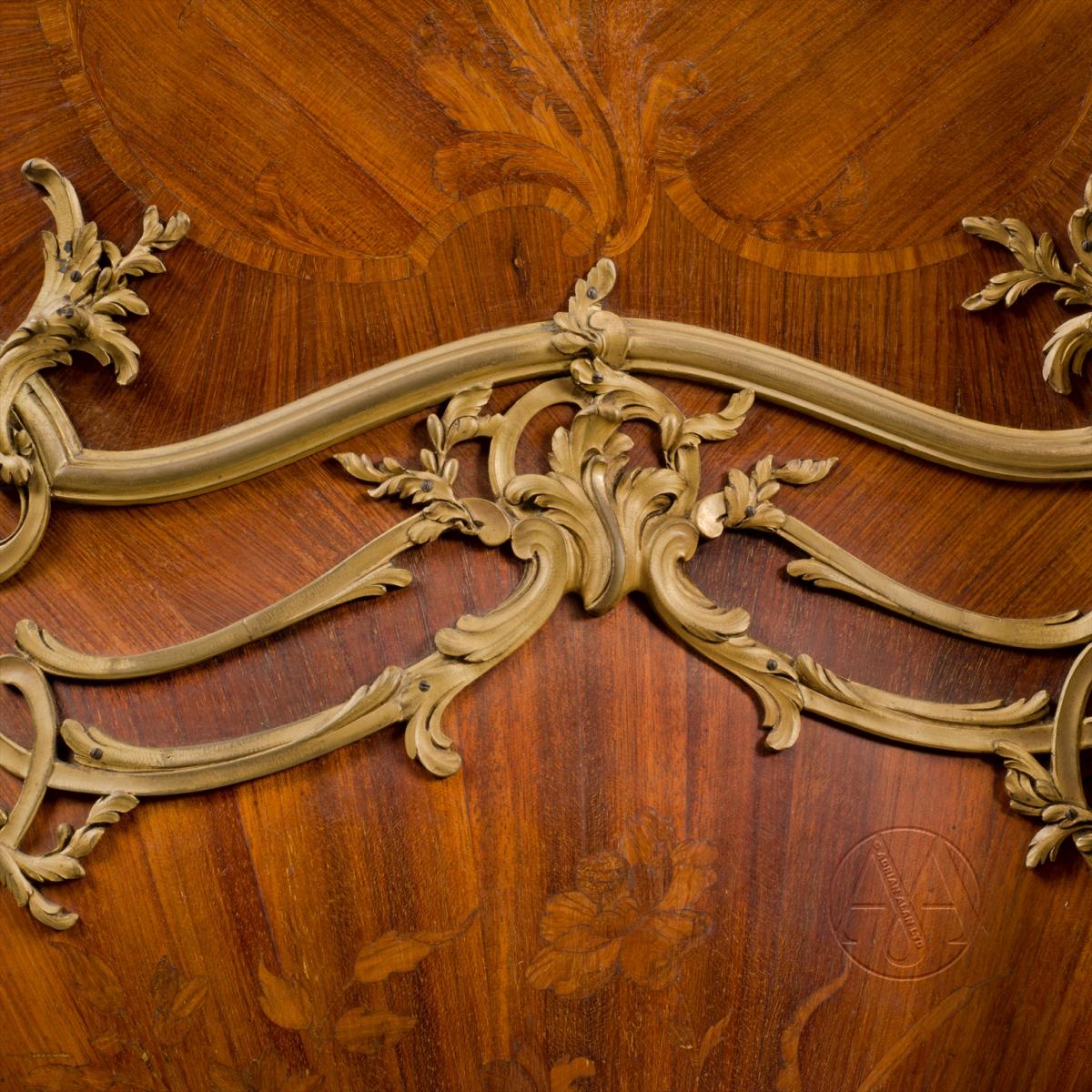 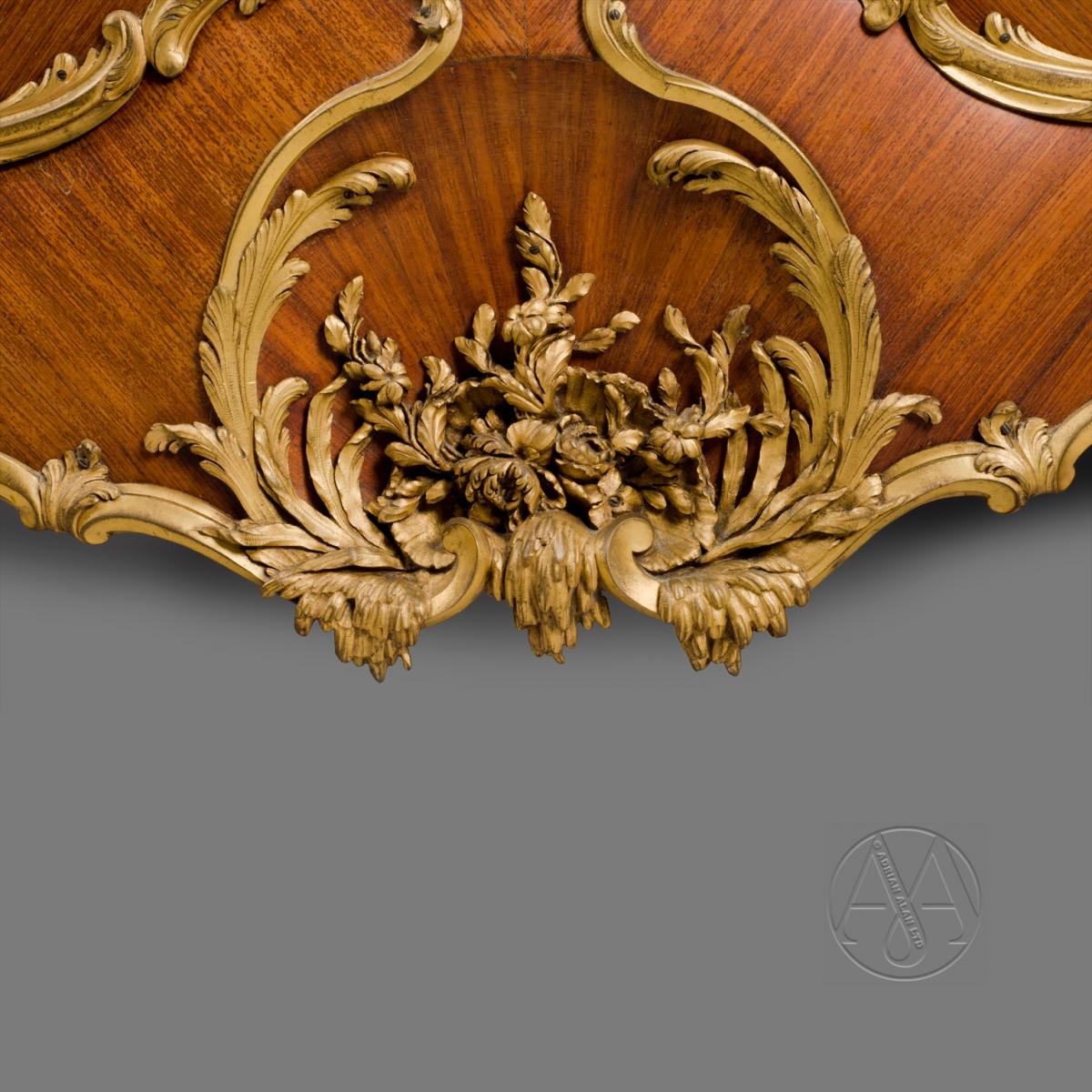 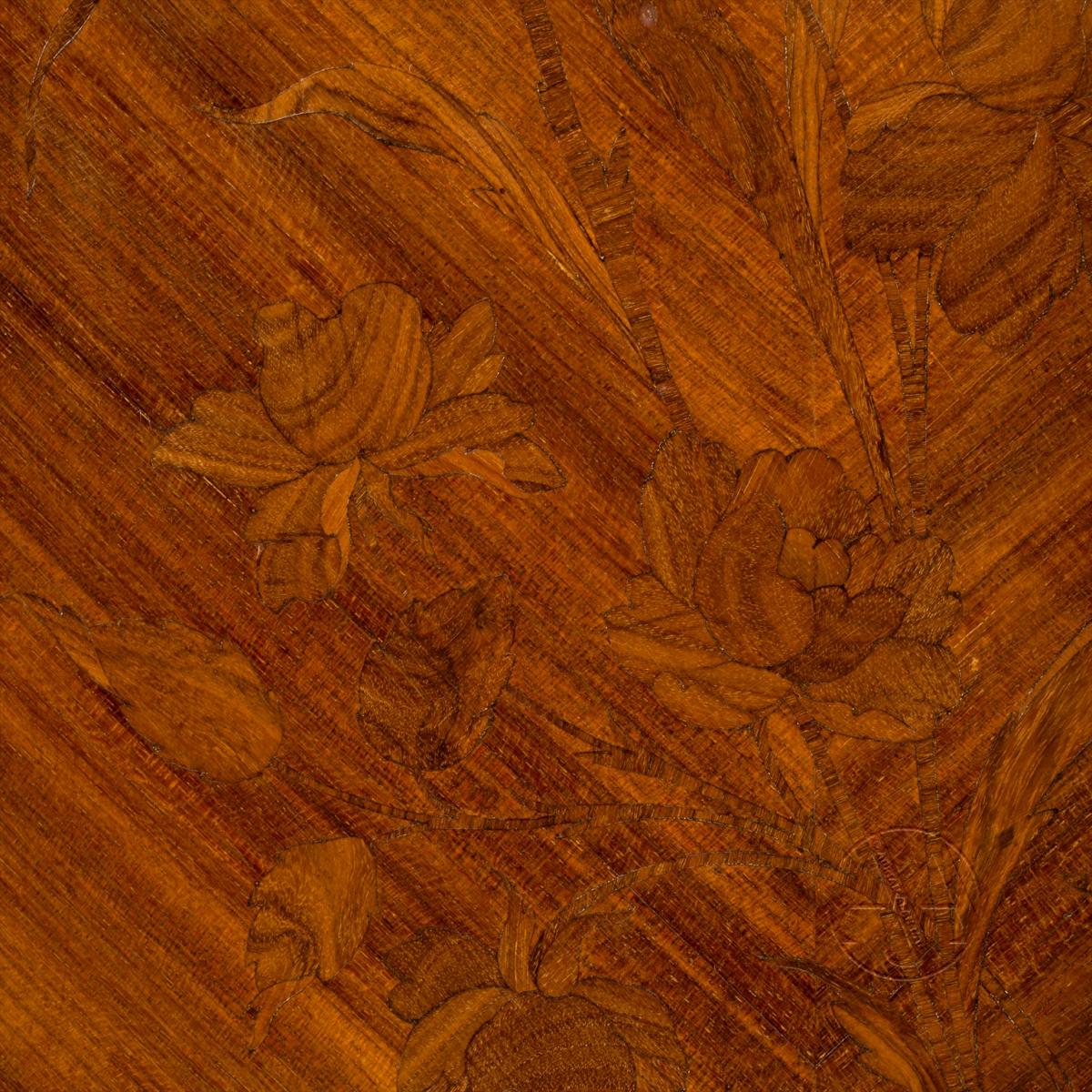 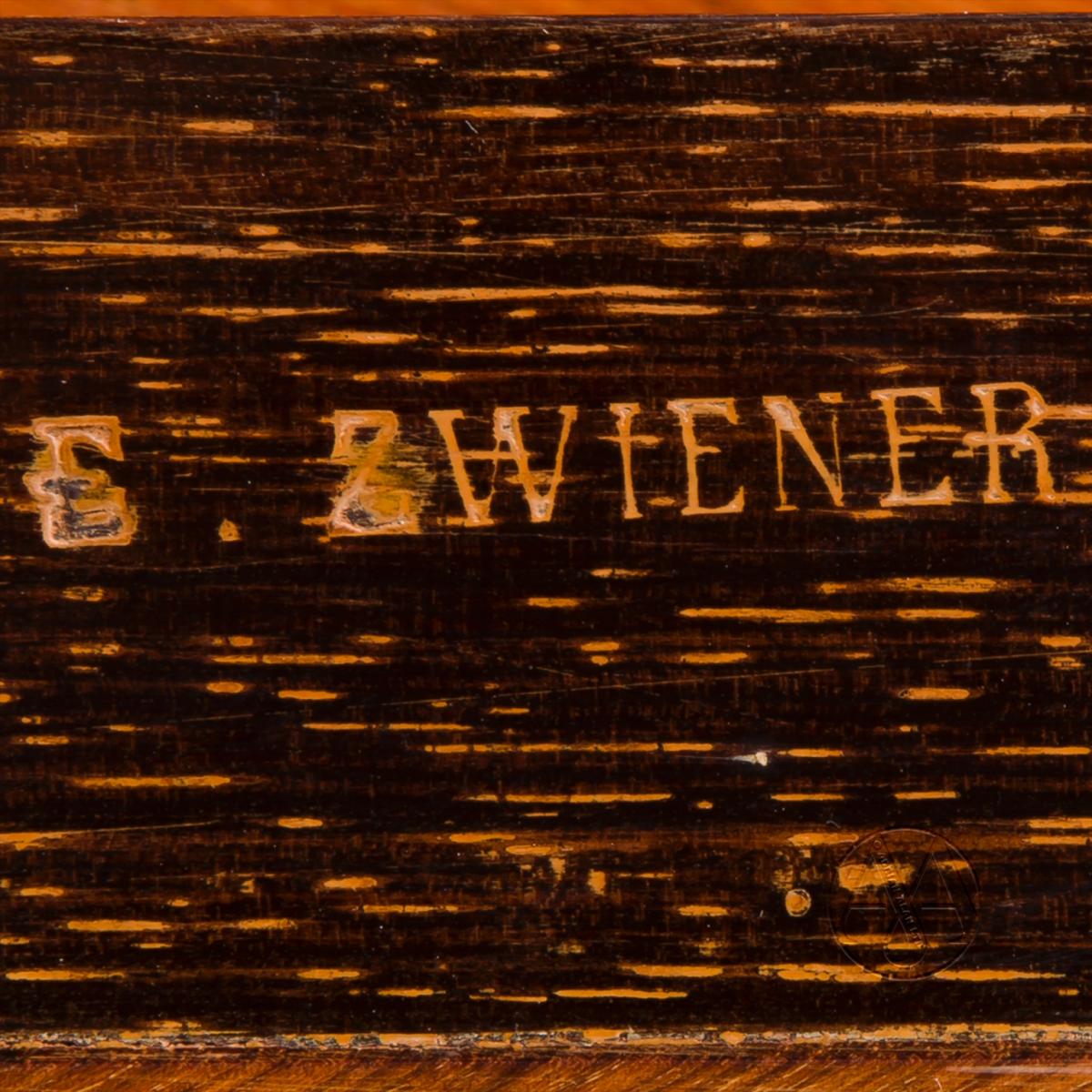 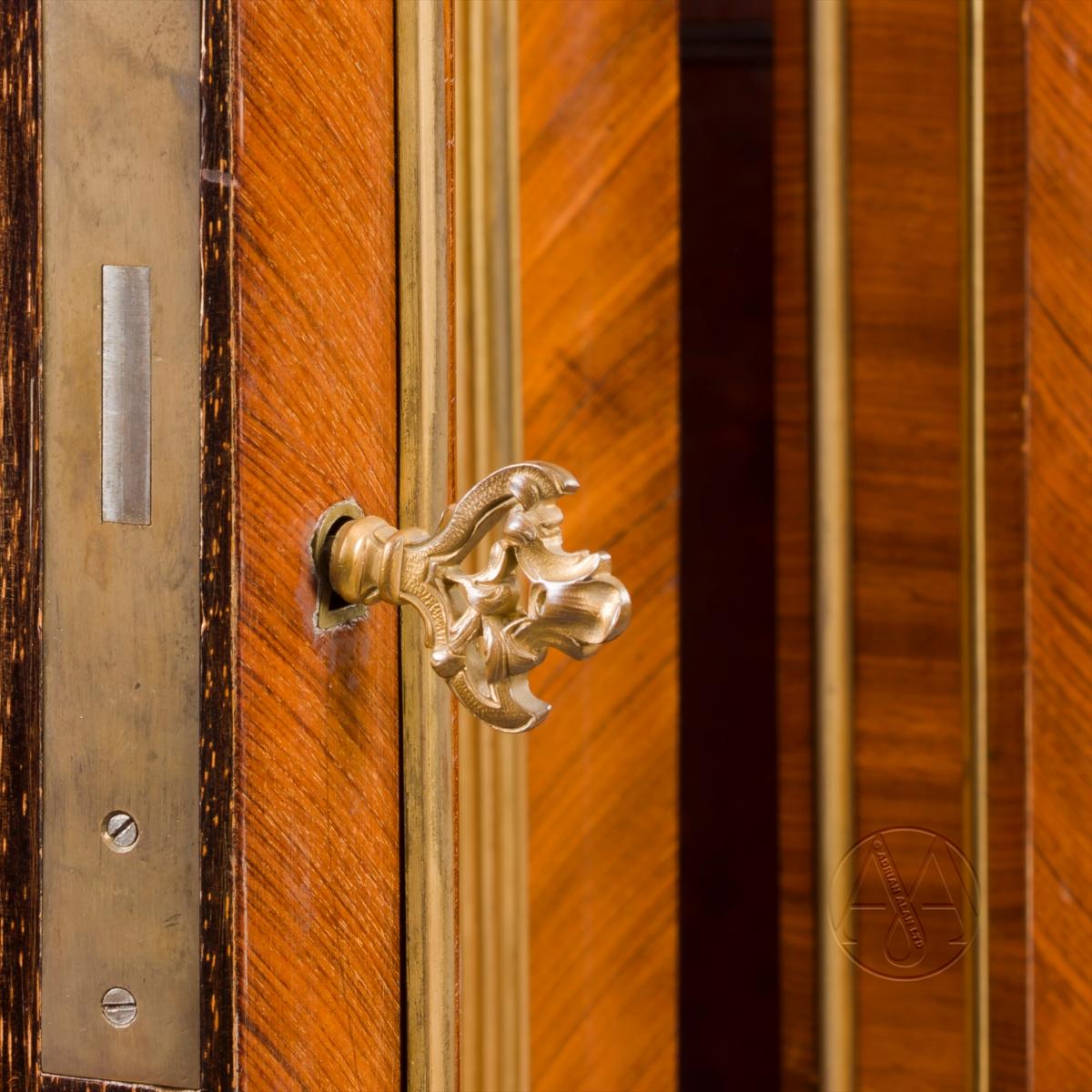 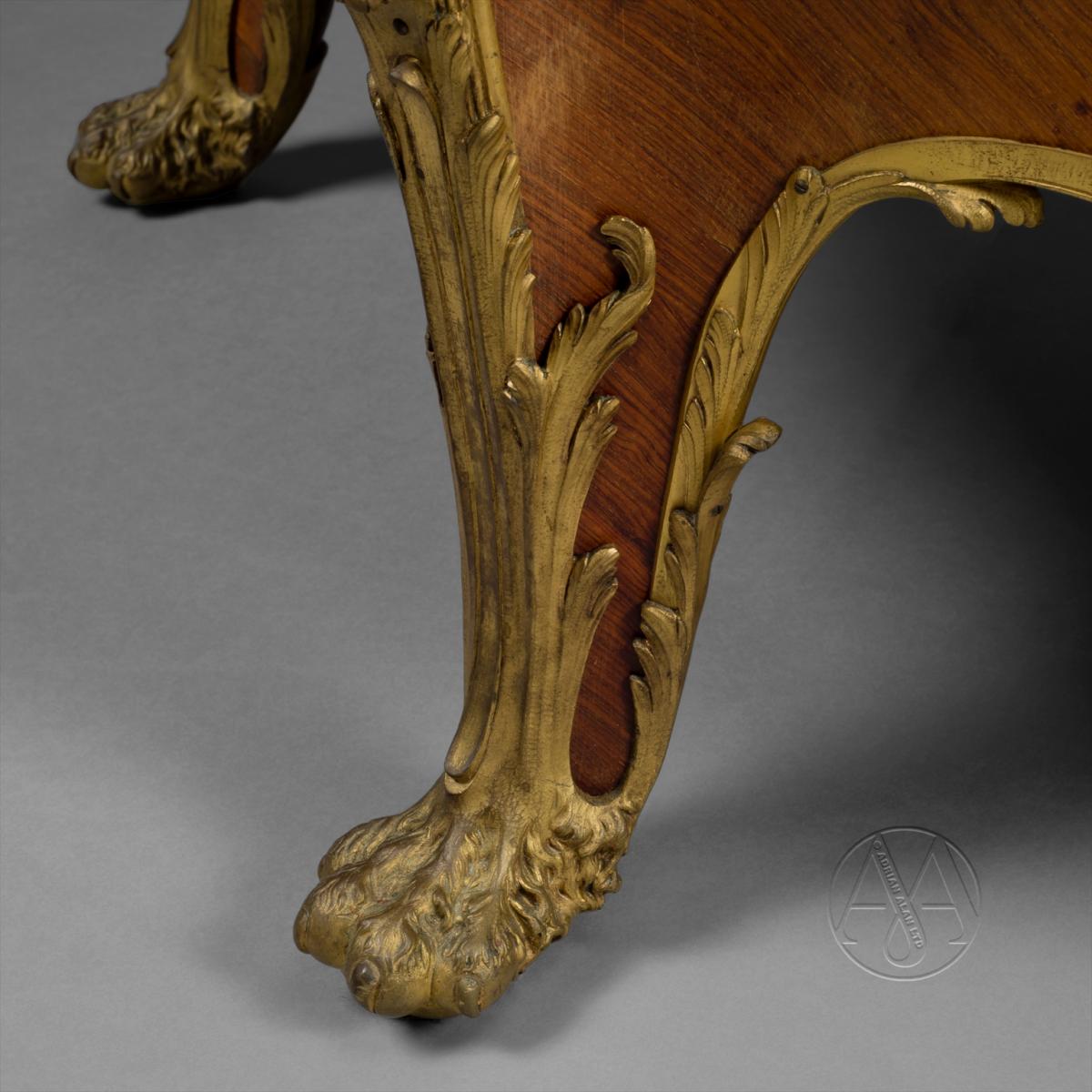 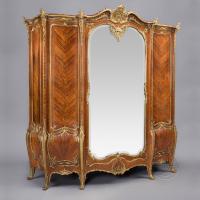 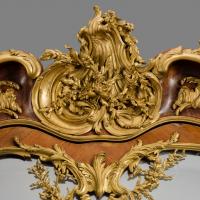 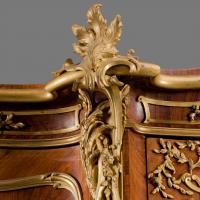 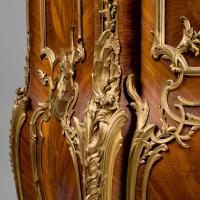 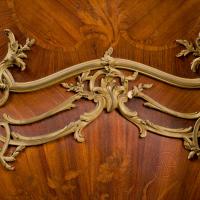 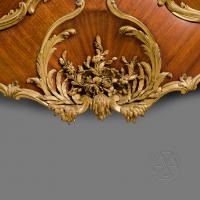 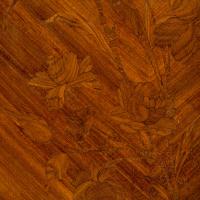 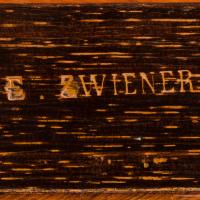 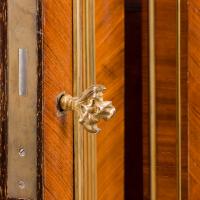 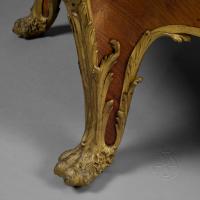 Forming part of an important and very rare bedroom suite, comprised of an armoire, a double bed, and a dressing table , all with fine marquetry inlay.

This important and magnificent armoire exemplifies the furniture maker's master artisanship and exhibits distinct similarities to another Zwiener bedroom suite, commissioned circa 1898 for Kaiser Wilhelm II, and which is now in the permanent collection of Schloss Charlottenburg in Berlin.

Zwiener's work is remarkable for its organic, sculptural quality. In this he demonstrates a tendency toward the principles of combining the traditional Louis XV rococo style of the 18th century with the ultra-modern, contemporary Art Nouveau, representing a careful balance between decorative and compositional vocabulary, the stylish and the functional.

Zwiener's innovations are apparent in the detailing on this armoire, such as in the flowery gilt-bronze borders of the end-cut marquetry reserves.  The large armoire stands on six paw-footed legs and displays another scallop-shaped crest with a rose. Favouring the natural effects of inlaid work in the veneer, Zwiener designed his accompanying floral marquetry to be flat and with few sculptural illusions.

In 1895, Zwiener was summoned to Berlin at the request of German emperor Wilhelm II (1859-1941) at Schloss Neues Palais, Sans Souci, Potsdam. Among the works the Kaiser would commission was a gilt-bronze mounted marquetry bedstead, circa 1895, with gilt-bronze work attributed not to Messagé, but to Otto Rohloff. This piece was exhibited at the Paris Universal Exhibition in 1900 [see: L' Exposition de Paris, Encyclopédie du Siècle, Montgredien et Cie, (Paris),1900; Vol III, p. 288]

Although he admired the work of Parisian cabinetmakers, Kaiser Wilhelm II preferred the work of German craftsmen. Zwiener had produced a copy of a bureau du roi for Ludwig II in 1884, prior to receiving his summons from this Kaiser, but given that there were a number of notable German craftsmen working for the court at the time, Wilhelm's interest in Zwiener was significant. Always keen to tout the ideals of a Franco-German unification, Wilhelm was probably intrigued by the fact that Zwiener, a German, had found such success in Paris. The Kaiser's commission must have likewise been a strong inducement for Zwiener, who had spent so much of his professional life away from home.

In 1895 his Paris workshop was taken over by the important émigré and ébéniste, François Linke.  Christopher Payne, in his book on Linke,  speculates that Linke may have worked for Zwiener when he first arrived in Paris in 1875.   Linke is known to have also taken on Zwiener's sculptor Léon Messagé.  For this reason many of Zwiener's pieces have often been mistakenly attributed to Linke.

In order to differentiate between Messagé's commissions, the gilt bronze mounts were often marked to the reverse with the maker's initials.  Several of Zwiener's mounts have been found to have a 'Z', ' Zw', a 'IZ', 'NZ', 'ZN' or a 'ZJ' on the reverse.  This was primarily for the purpose of differentiation, rather than an artist's signature.  Some of Zwiener's work was stamped but not exclusively, and only a few pieces have been found with a full signature and /or a date.

It can be speculated that Zwiener continued to work in Germany, after giving up his Paris workshop in 1895, as in 1900 he participated in the German section of the Paris Exhibition, where he exhibited the famous bedroom suite made for the Kaiser.