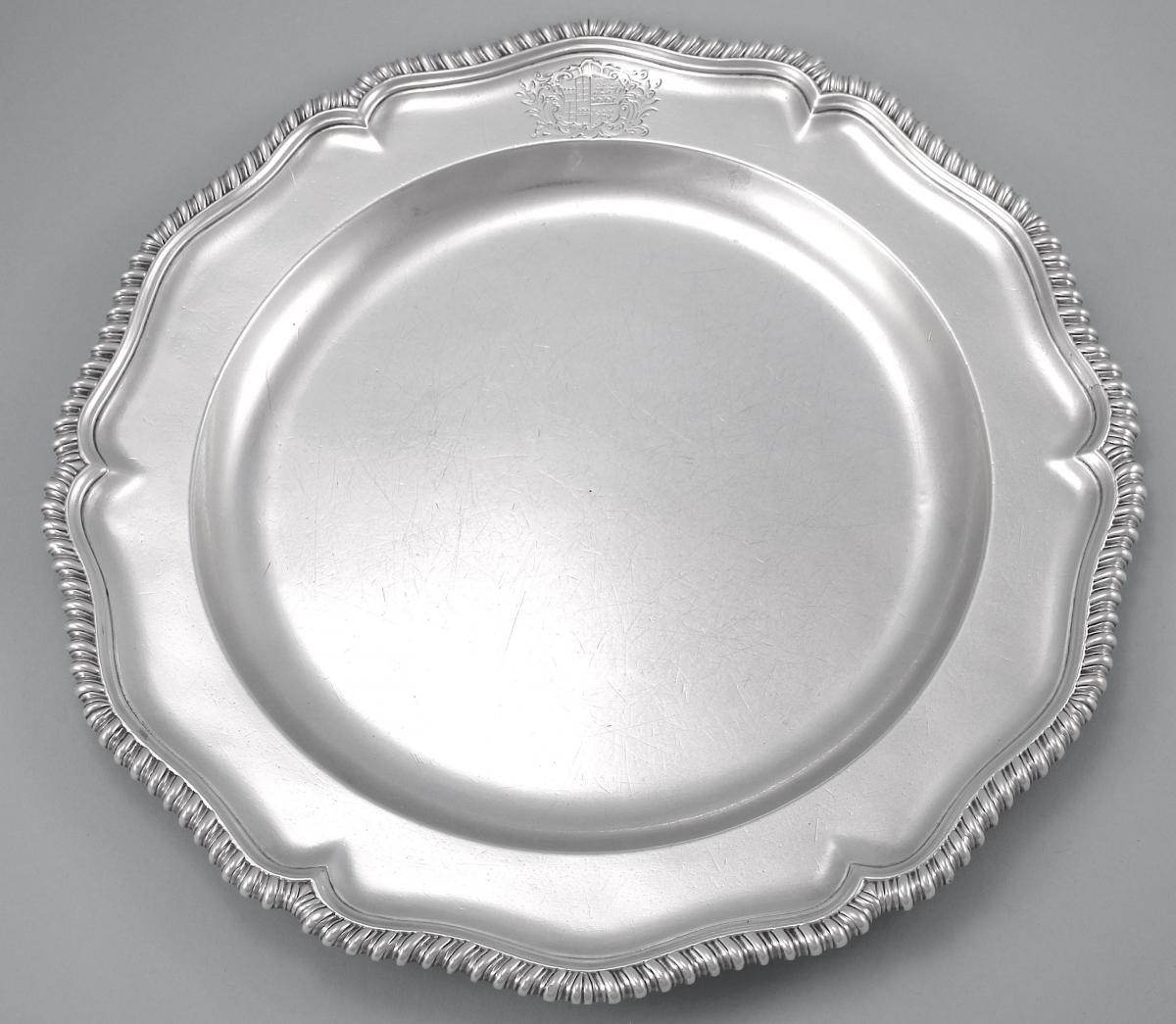 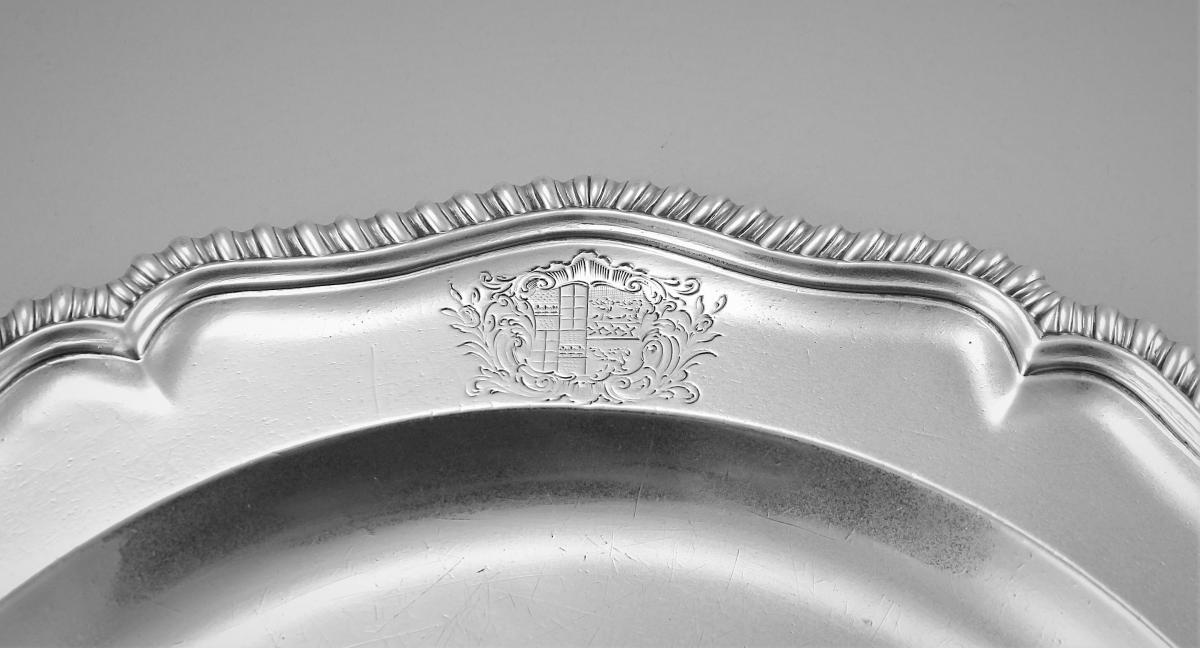 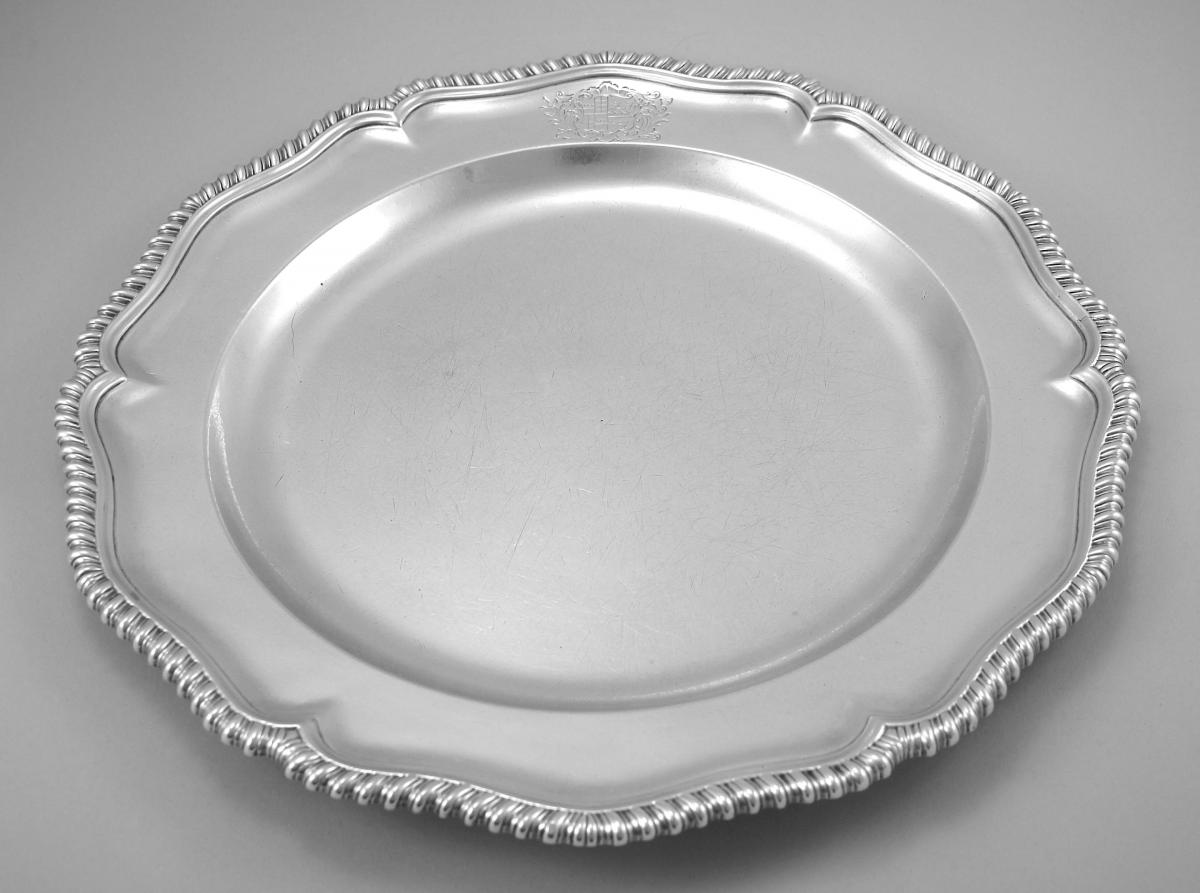 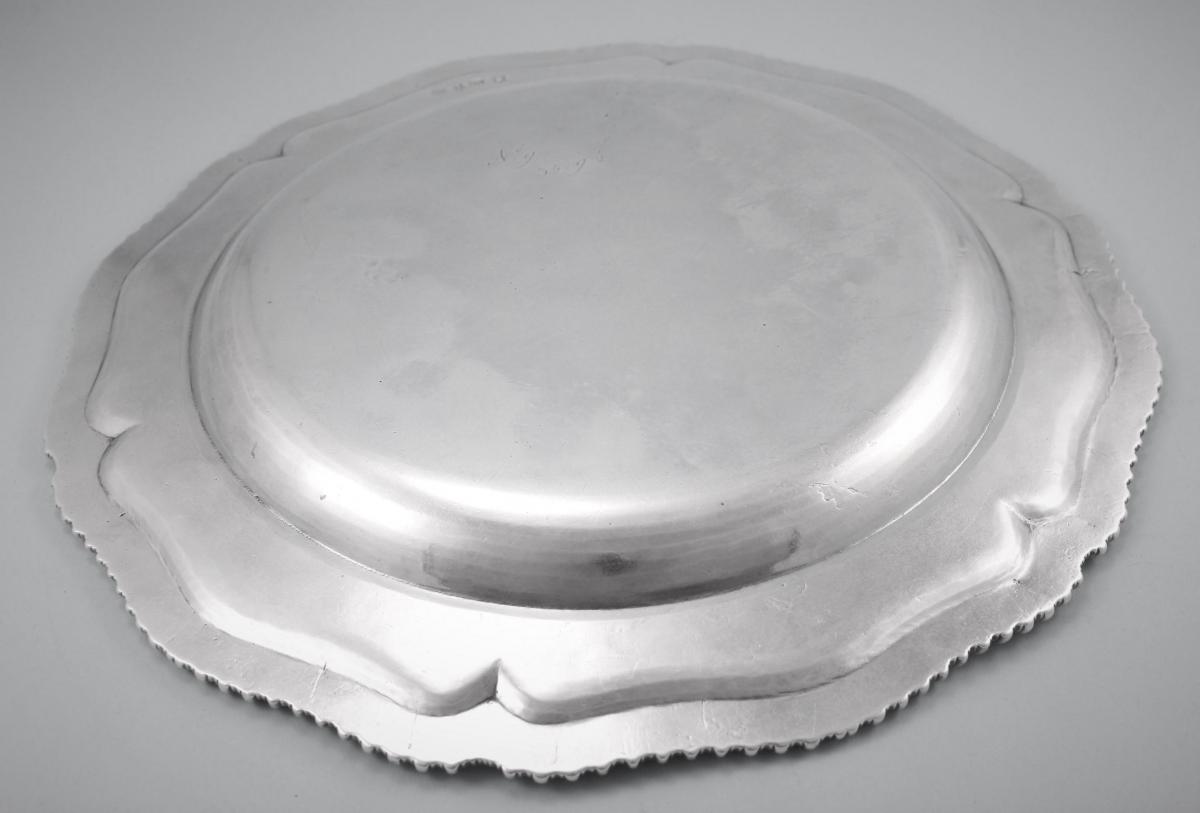 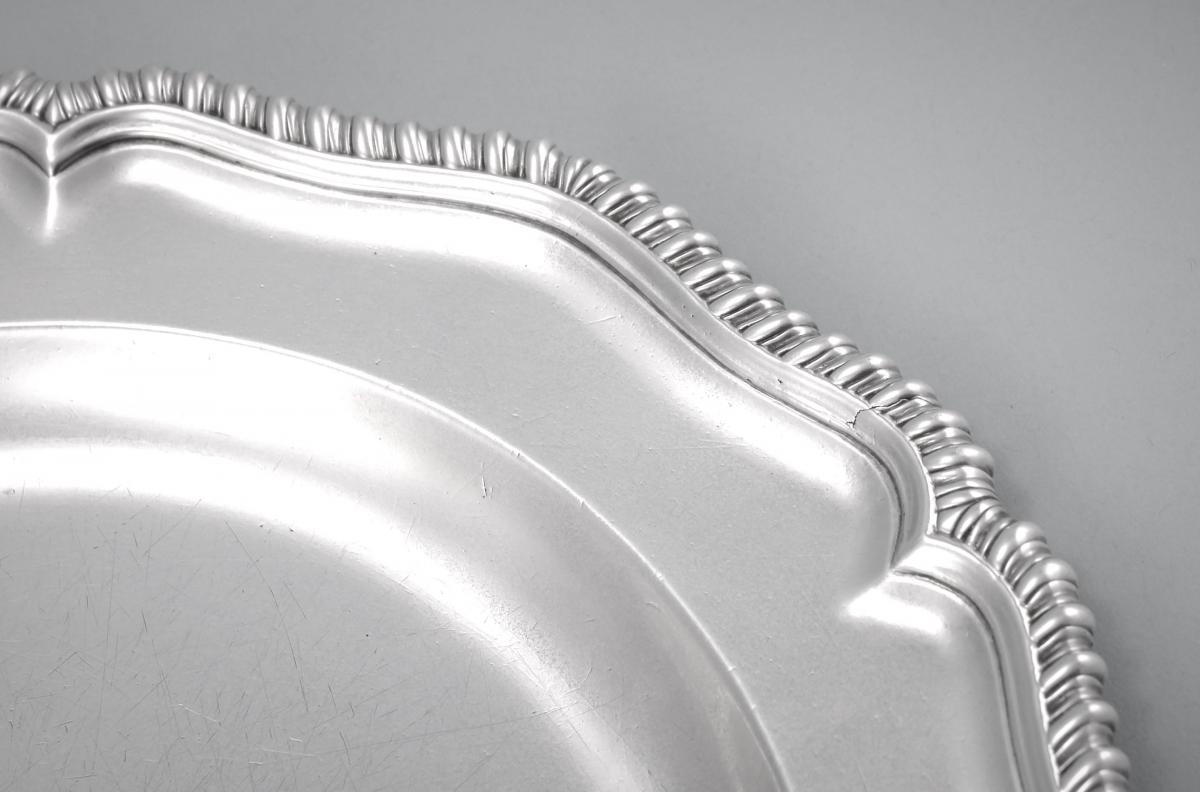 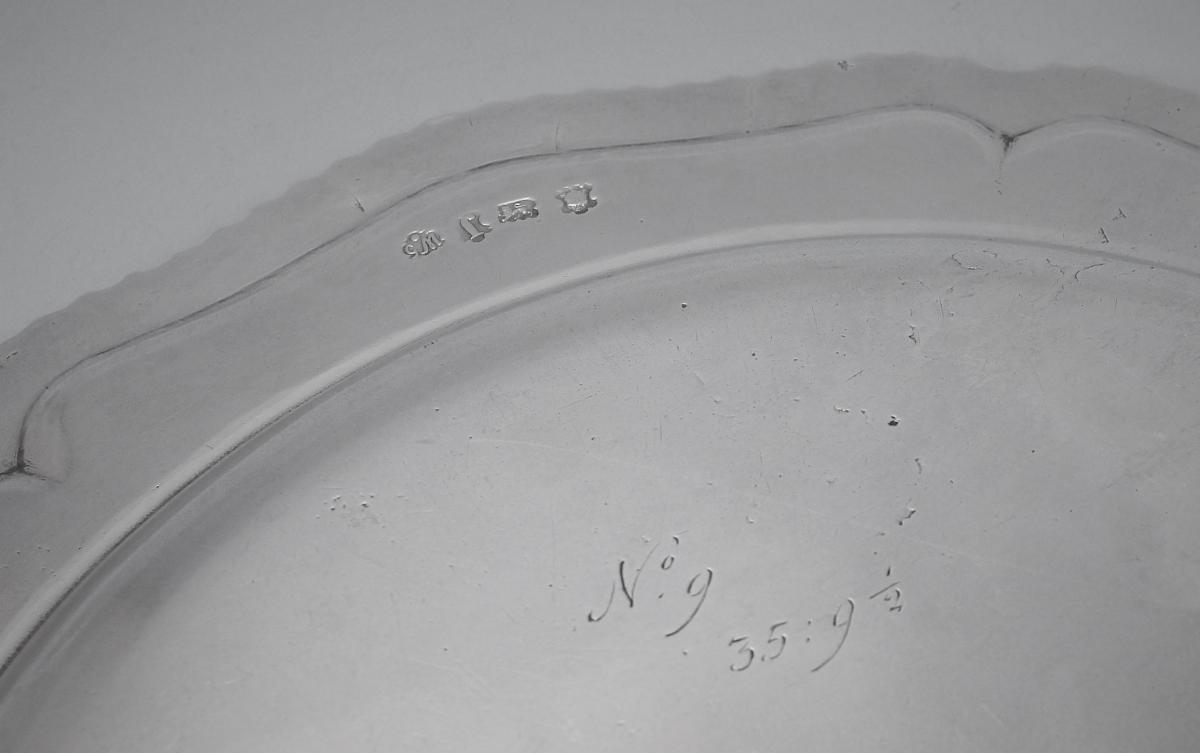 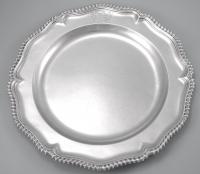 This handsome 1753 dish by George Methuen bears contemporary armorials that spell out a fascinating history and connections. The arms are Lennard quartering Barrett impaling Pratt and were for a short period (15th May 1739 until 26th June 1755) used like this by Thomas Lennard-Barrett. He  succeeded his mother in 1755 as the 17th Lord Dacre of Gilsland in Cumbria, and would from then on have borne the full heraldic achievement of this ancient Barony incorporating coronet, wolf and bull supporters and motto Pour bien desirer - To wish well.

The Barony was created for Sir Randolph de Dacre in the 14th Century (full details to be found in the Complete Peerage, Vol III pp. 1 & 2).  Dacre Castle in Cumbria, near Penrith was one of his castles, considered to have been originally built by his wife’s family, Multon.  Today the restored residence belongs to the nearby family of Dalemain and is rented out.

Thomas Lennard Barrett however, resided mainly at Estates he had inherited in Norfolk, Ireland and Essex, in particular Belhus near Thurrock, which he “improved” with gothic-isation between 1744 and 1777. He was supported and encouraged by his friends Horace Walpole and Sanderson Miller in creating the Strawberry Hill effect, also hiring Capability Brown to redesign the Gardens.   His personality appears to have been dominated by hypochondria; “a martyr to rheumatic gout” said an obituary, but a friend, Horace Mann, noted “that he is not so ill as he thinks” [John Ingamells ed., A Dictionary of British and Irish Travellers in Italy (1701-1800), p.53].

He married, on 15th May 1739, Anna Maria Pratt, sister of Charles, 1st Earl of Camden and daughter of the Lord Chief Justice, Sir John Pratt. Their only child, Barbara Anne, died aged 9 of a sudden fever.  A portrait was painted when the couple, after the untimely death of their only daughter, went to experience the Grand Tour as a distraction during their recovery. After visiting Naples, Florence, Venice and other Italian cities, the couple arrived in Rome around 1750, where they met painter Pompeo Batoni. The artist painted Barbara Annes likeness from a miniature by Thomas Hudson which the couple brought with them on their travels. 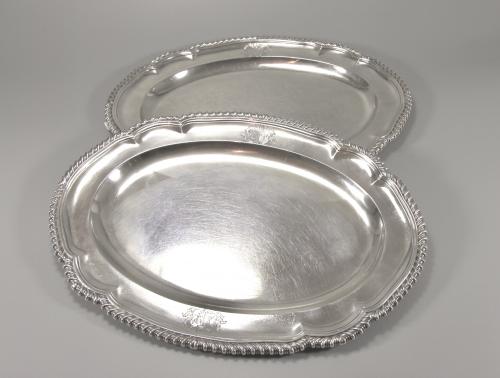 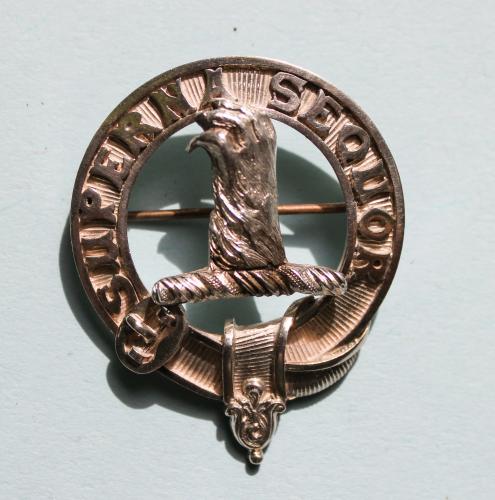 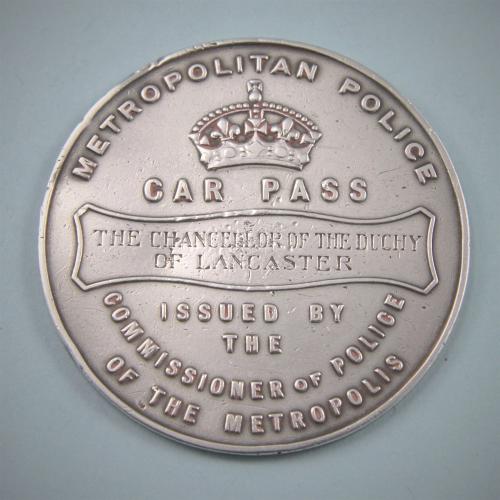