An important & extremely rare George II Pepper Caster, of large size, made in London in 1732 by Peze Pilleau 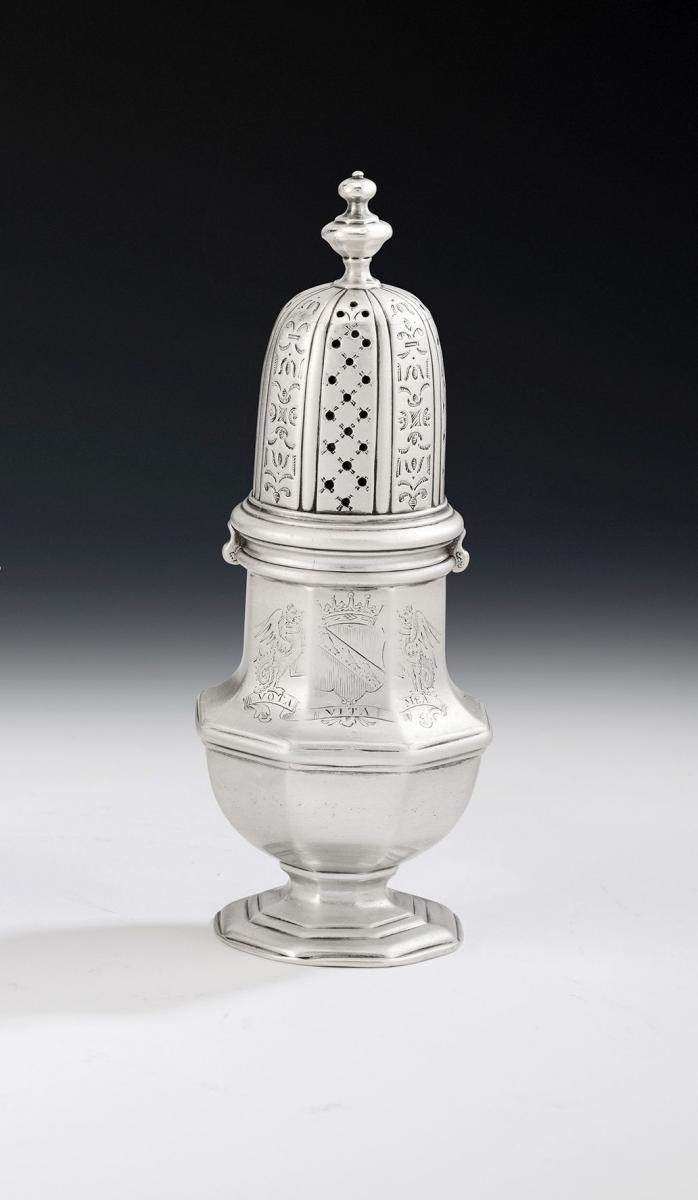 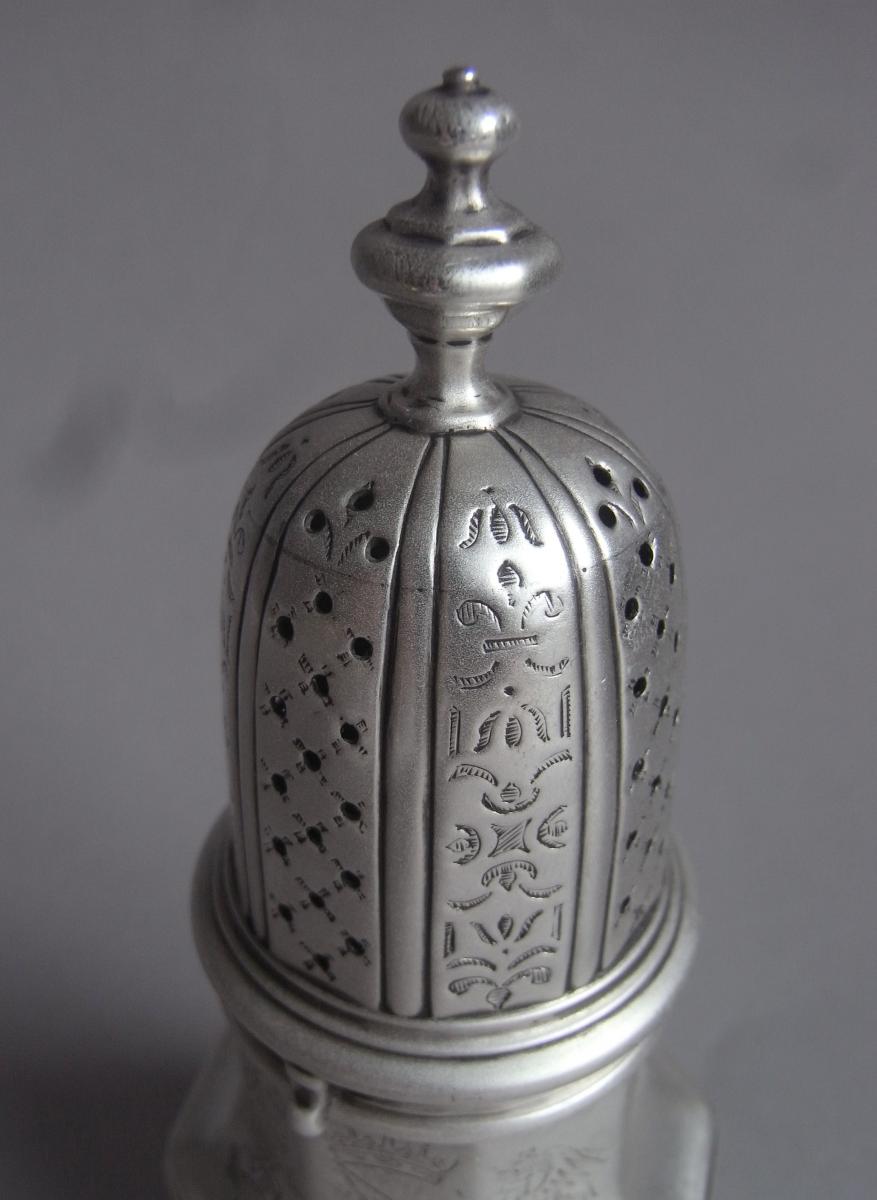 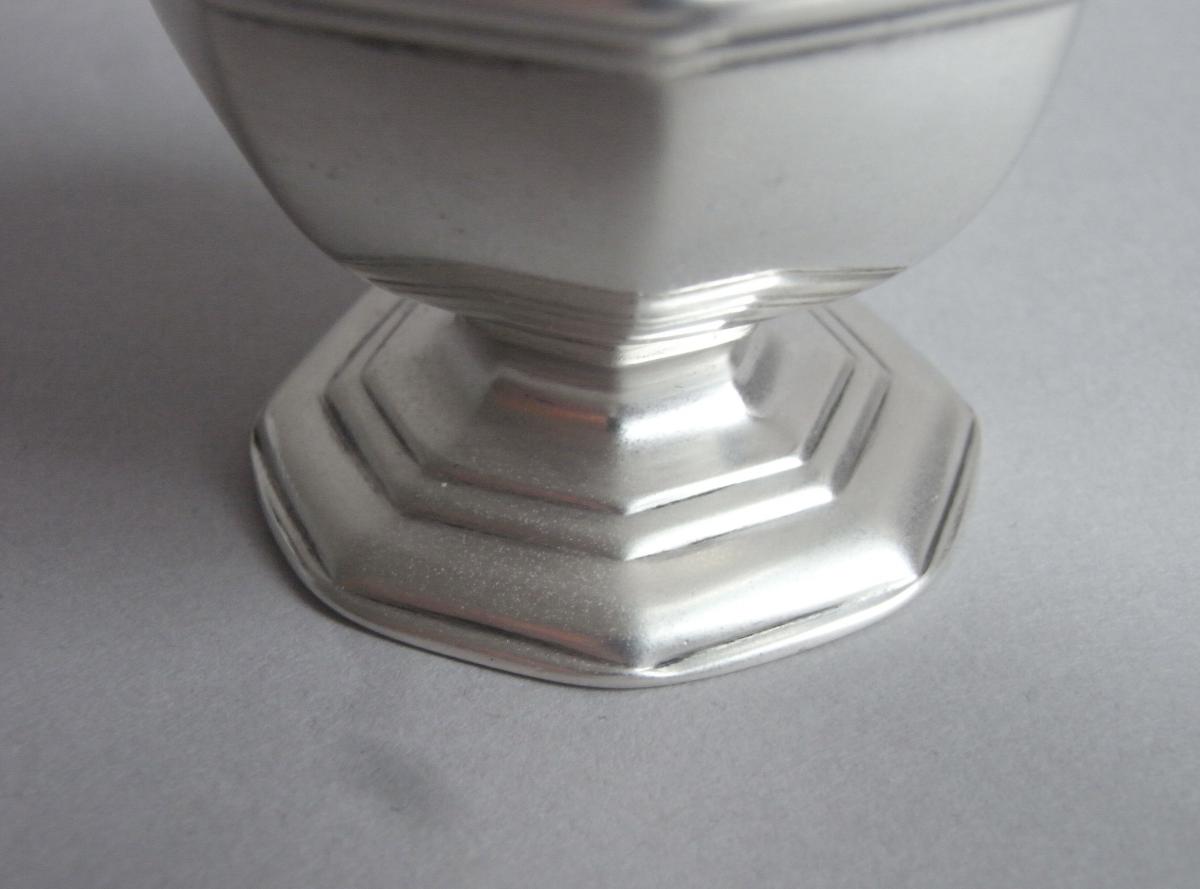 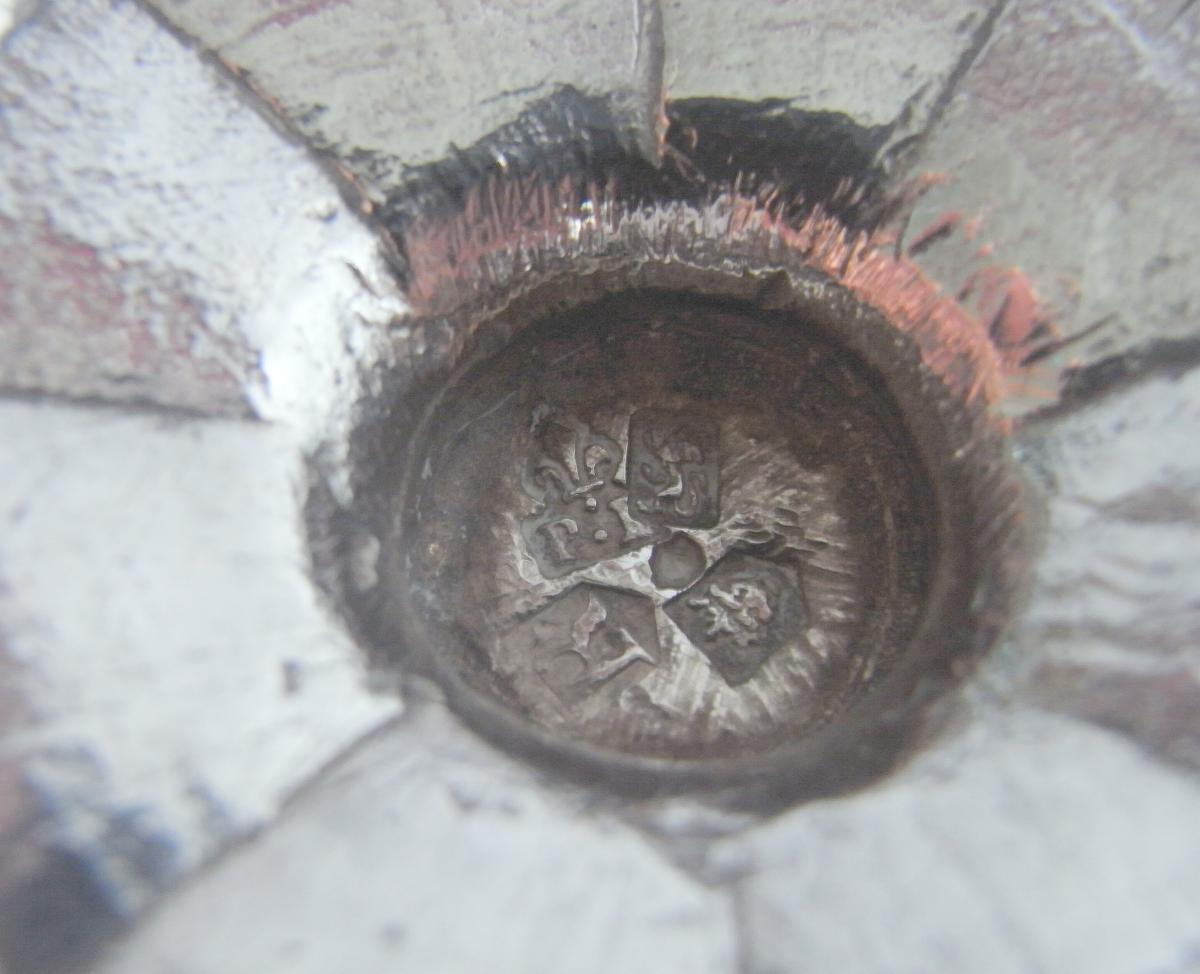 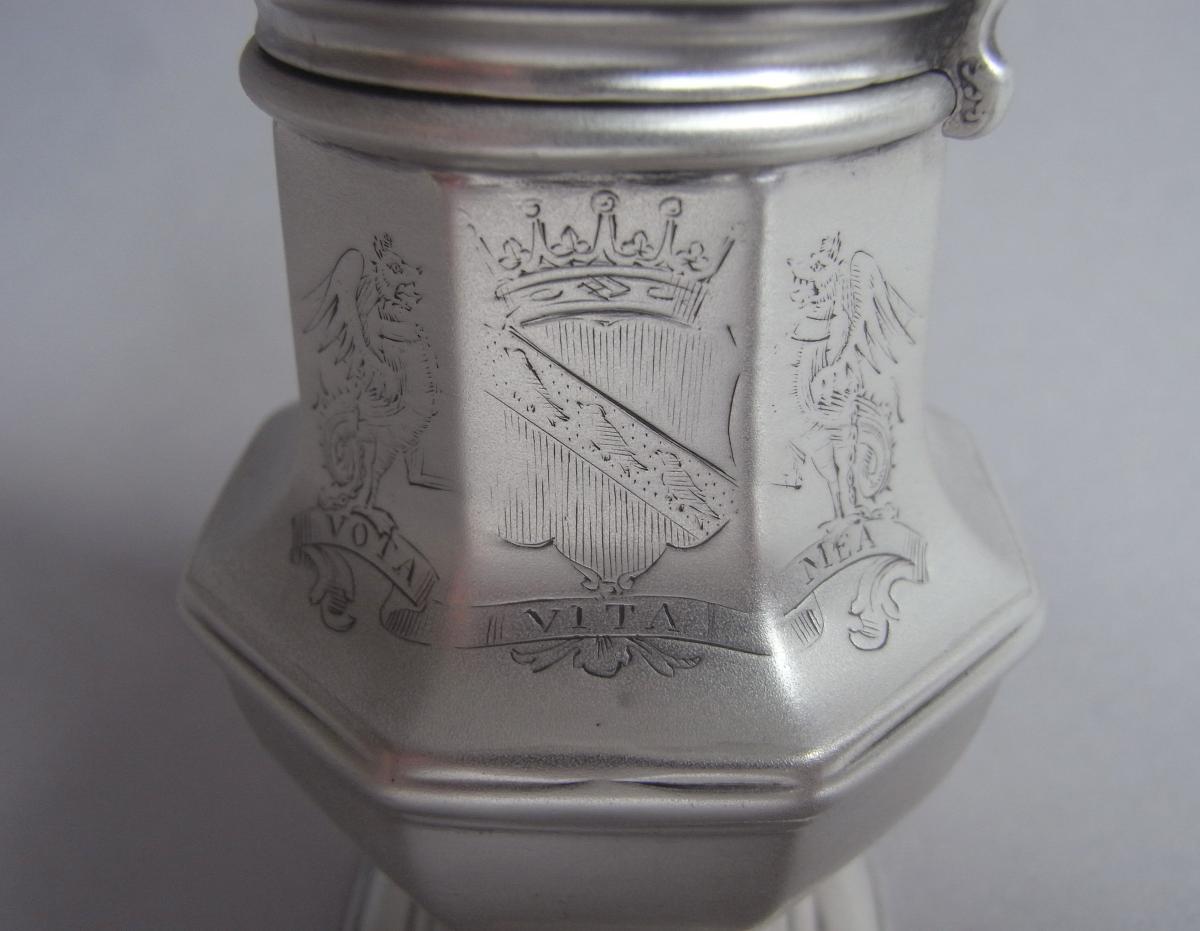 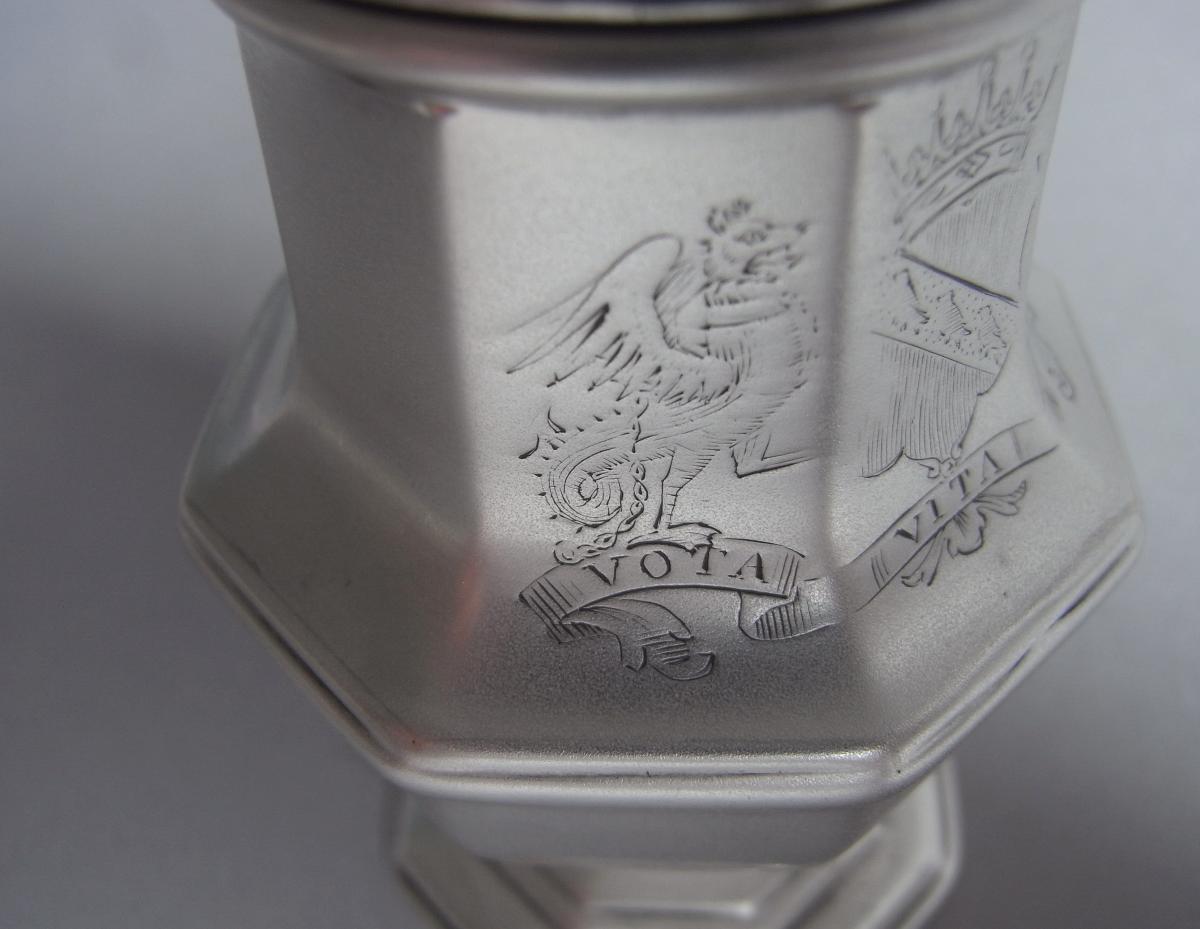 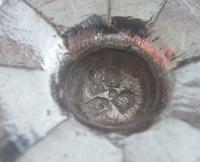 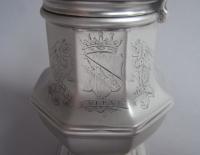 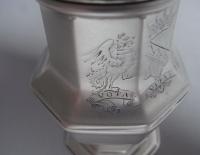 It is most unusual to find octagonal pepper casters, especially of this size, which may well have been a special commission.  This very fine piece stands on a flared cast and applied stepped octagonal foot.

The caster has a vase shaped octagonal main body which displays an applied girdle around the middle.  The octagonal cover has a bayonet fitting and terminates in a cast baluster finial.  The cover is plainly pierced on four panels and engraved with unusual chinoiserie geometric designs on the other four.

The front of the caster is engraved with a contemporary Armorial below the coronet of an Earl and above the Motto 'Vota Vita Mea - My Life is Vowed'.  The Arms are those of the Earls' of Meath, specifically for Chaworth Brabazon, 6th Earl of Meath 1686-1763.

In 1731 he married Juliana, daughter of Sir Thomas Prendergast.  It was his father, the 5th Earl, who was Say-Master (Master of Assays) in Ireland in 1675.  The Earls of Meath have an interesting lineage.

Their seat is Kilruddy House in Bray, County Wicklow which was built in 1651 and contains some extremely fine stucco decoration.  The house was remodelled in the 19th century in the Elizabethan revival style and have fine French Classical gardens modelled around an unusual long pond.

Peze Pilleau is considered one of the finest of the Huguenot silversmiths and his work is often compared to Paul De Lamerie.  He is recorded as having workshops, at this date, above the Golden Cup, on the paved stones of Chandos Street, London.

A.G. Grimwade in his work 'London Goldsmith's 1697-1837' emphasises that 'Pilleau's work, though comparatively rare, is characterised by fine proportion and finish.'  It seemed that he specialised in faceted objects and produced magnificent jugs in the Huguenot taste.

Interestingly it was his father Alexis Pilleau who is recorded as being a goldsmith specialising in gold artificial teeth !  His great great grandfather, also Alexis, executed the silver and gold reliquary for the Cathedral of Le Mans in 1612.

Peze Pilleau married the daughter of his Master, John Chartier, and they had six sons and two daughters.  By the time of his death Pilleau was a man of some means as he left an estate at Wigborough, Essex to his daughter Susanne, who founded the Lying-in-Charity at Colchester.

His only surviving son Isaac had a reputation as an art connoisseur and assisted Lord Liverpool in the formation of his collection of pictures and engravings.  Isaac's descendents included a number of distinguished military and medical personalities of the nineteenth century.

The caster is in excellent condition and has a fine colour.  It is fully marked in the foot and with the maker's mark and sterling mark on the cover.  An extremely rare and desirable piece by a very important maker.