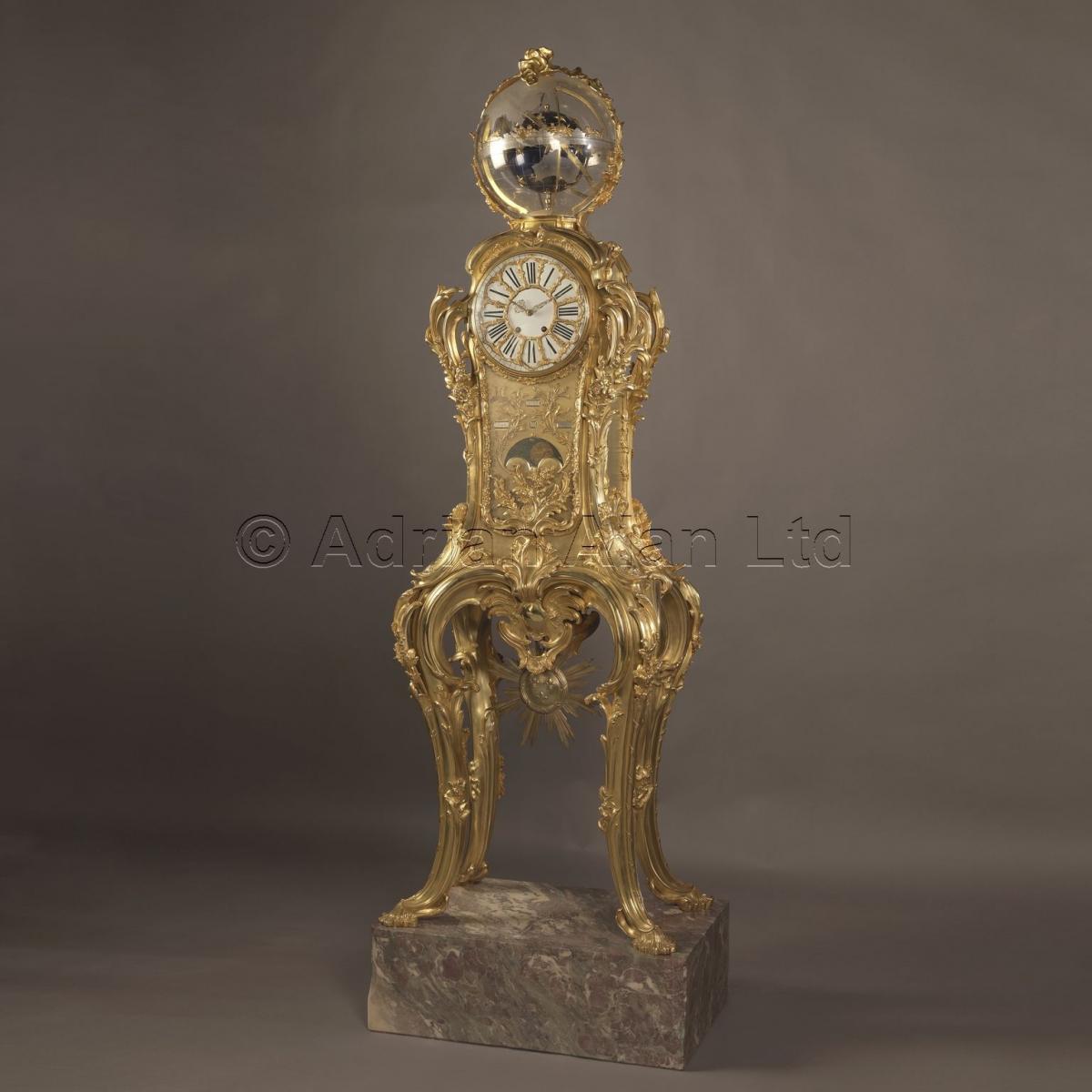 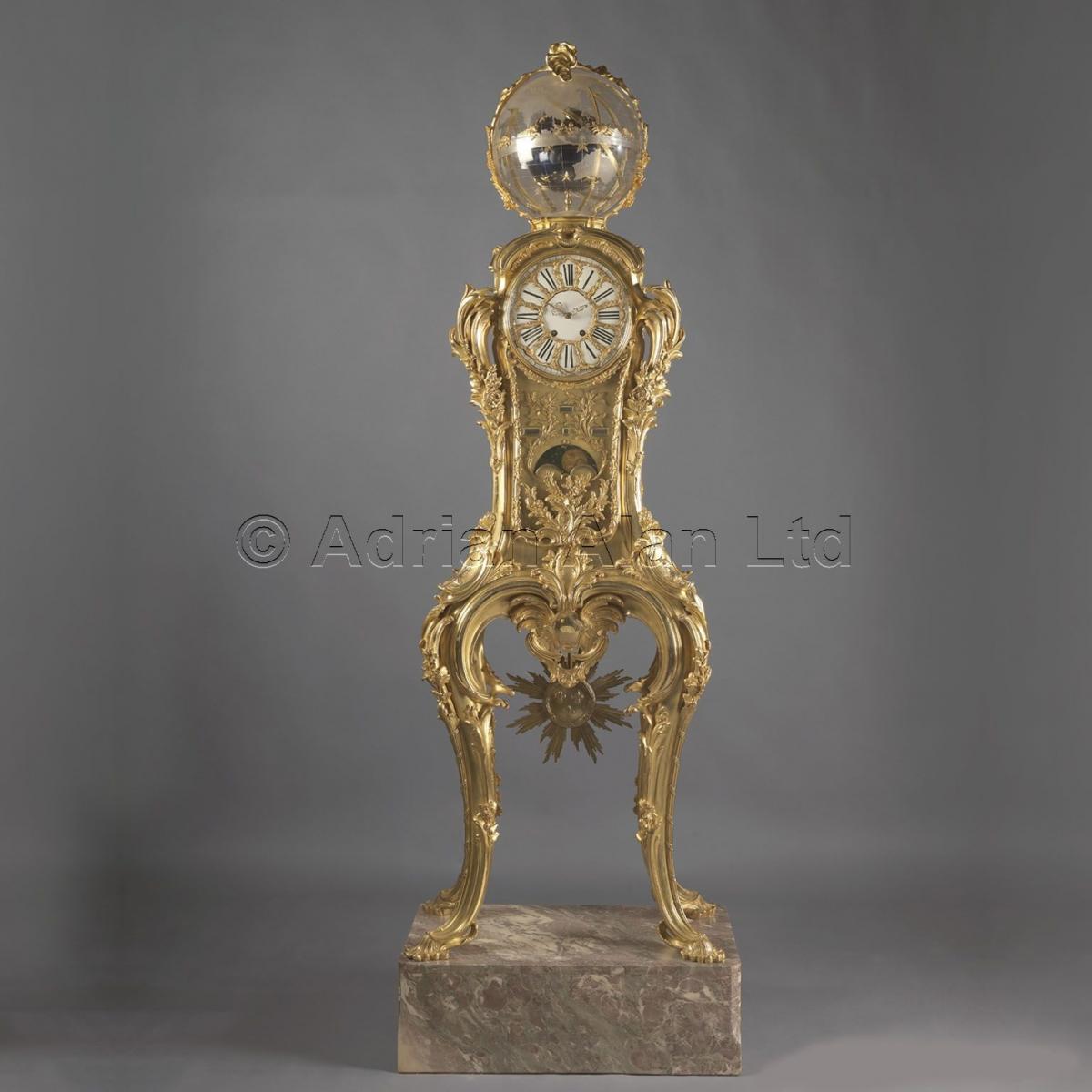 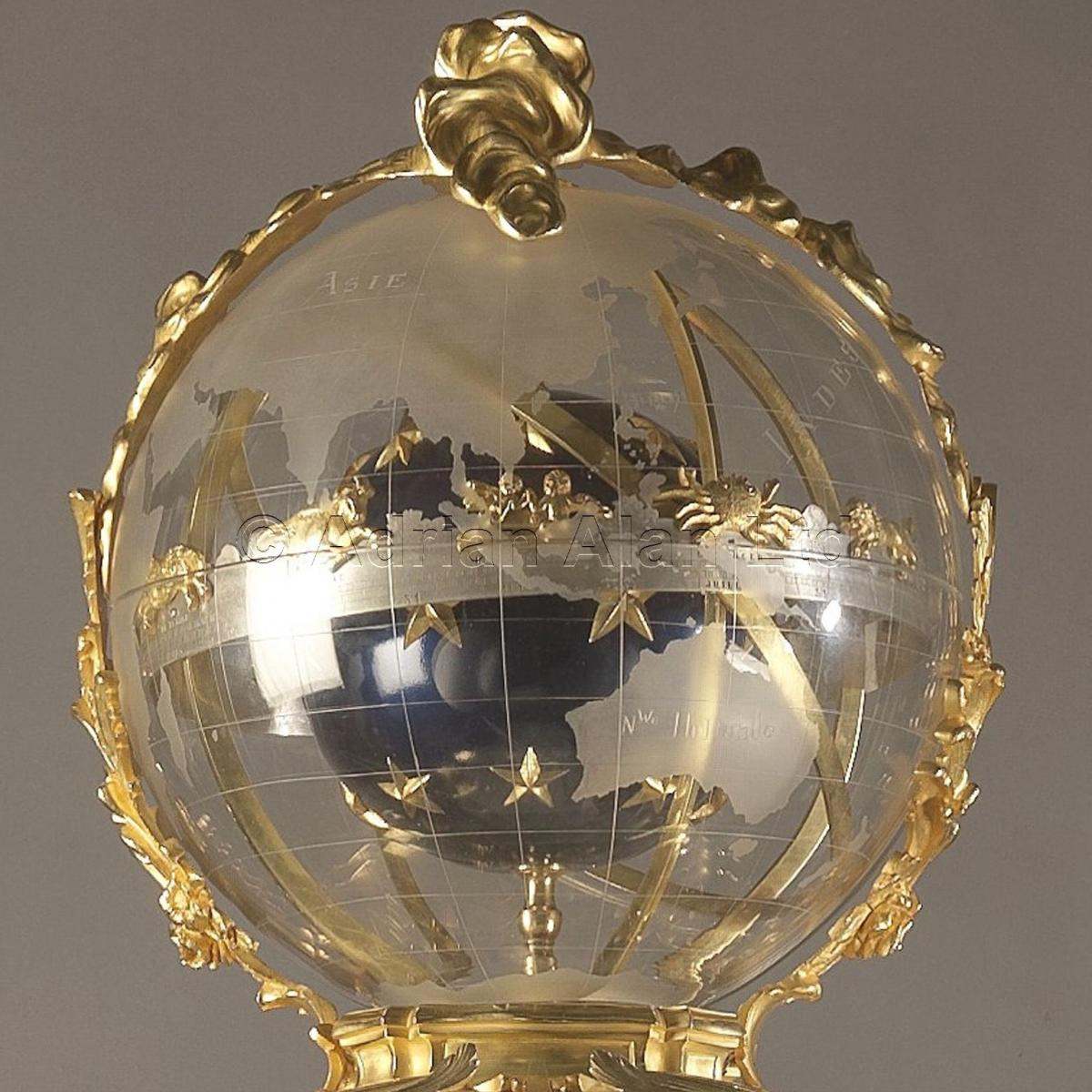 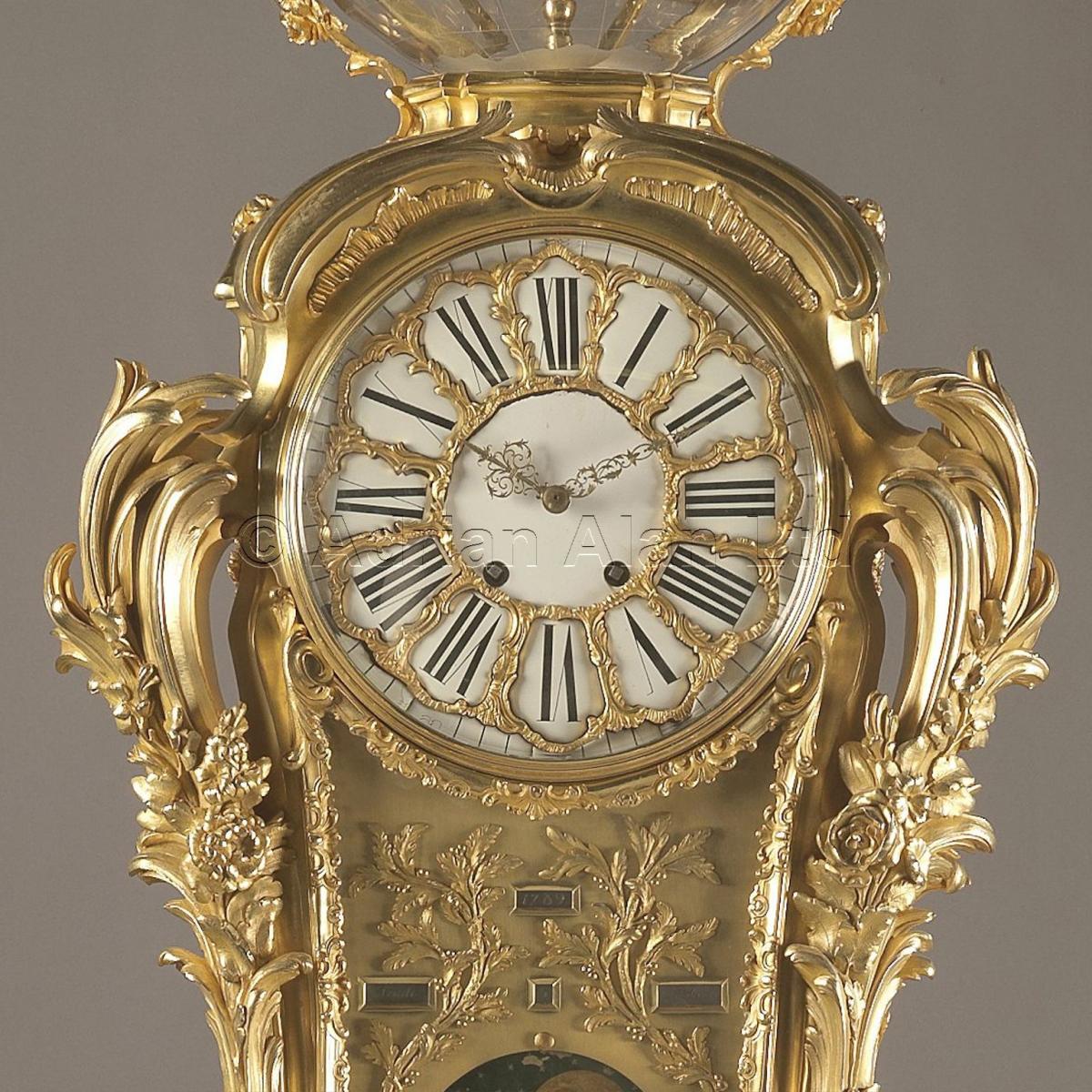 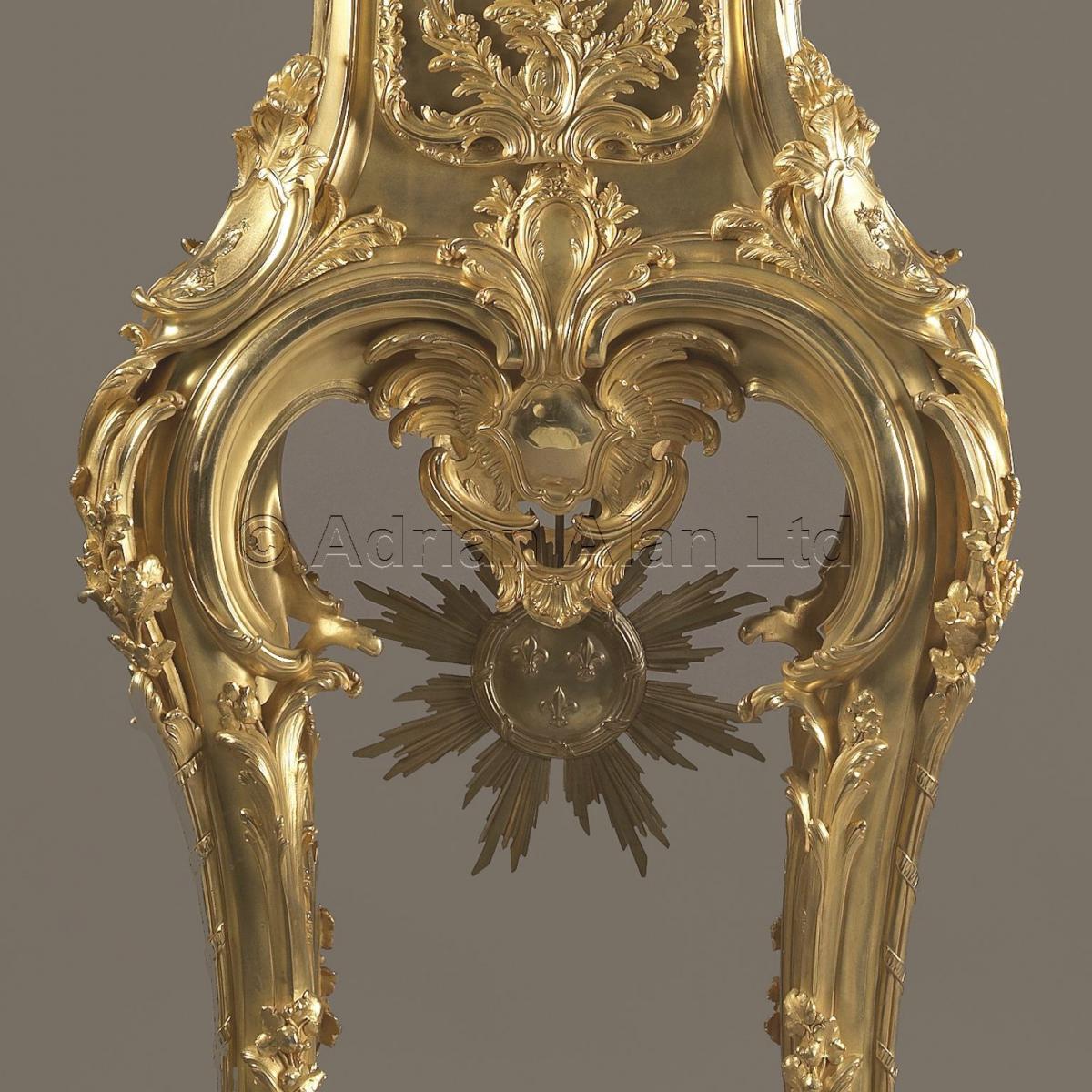 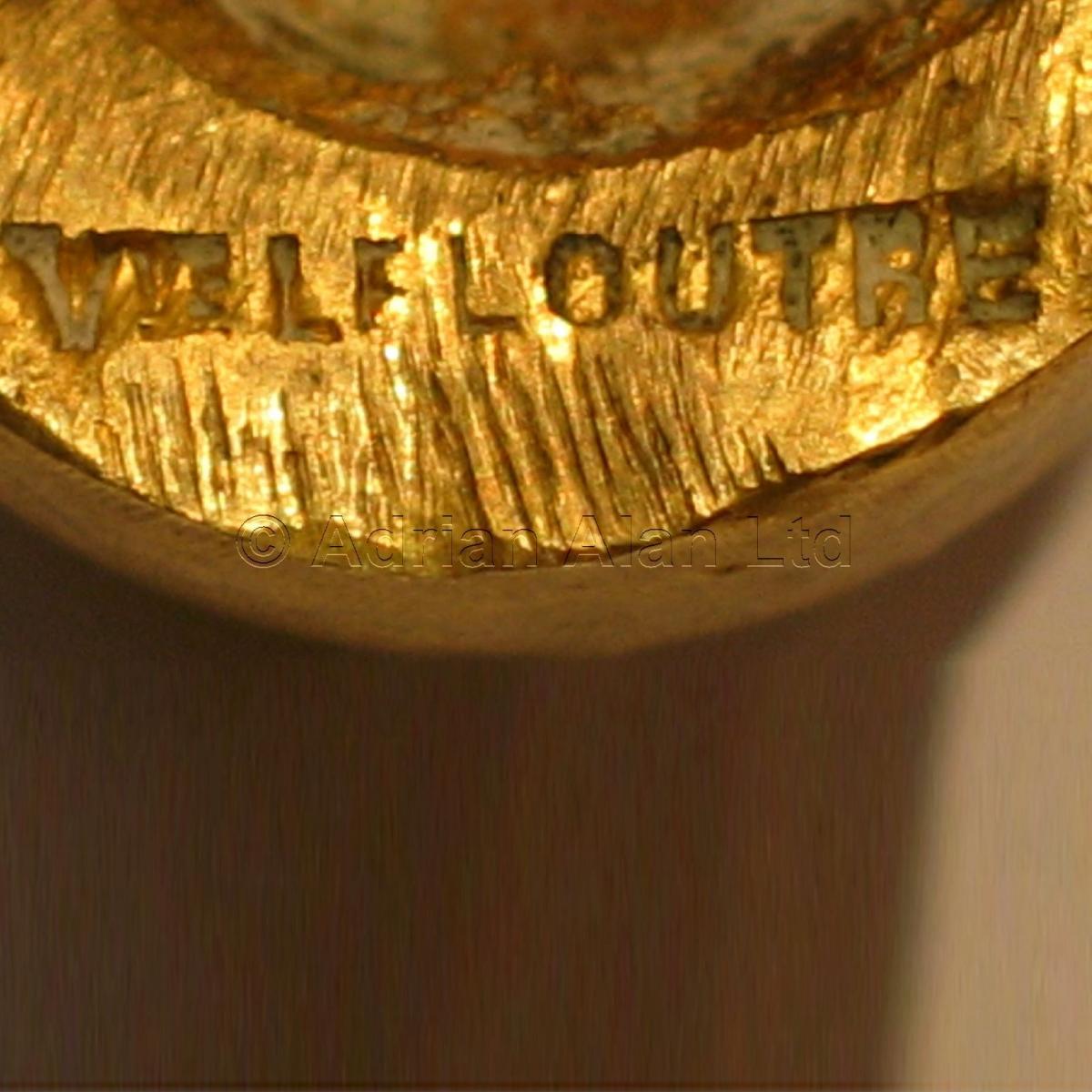 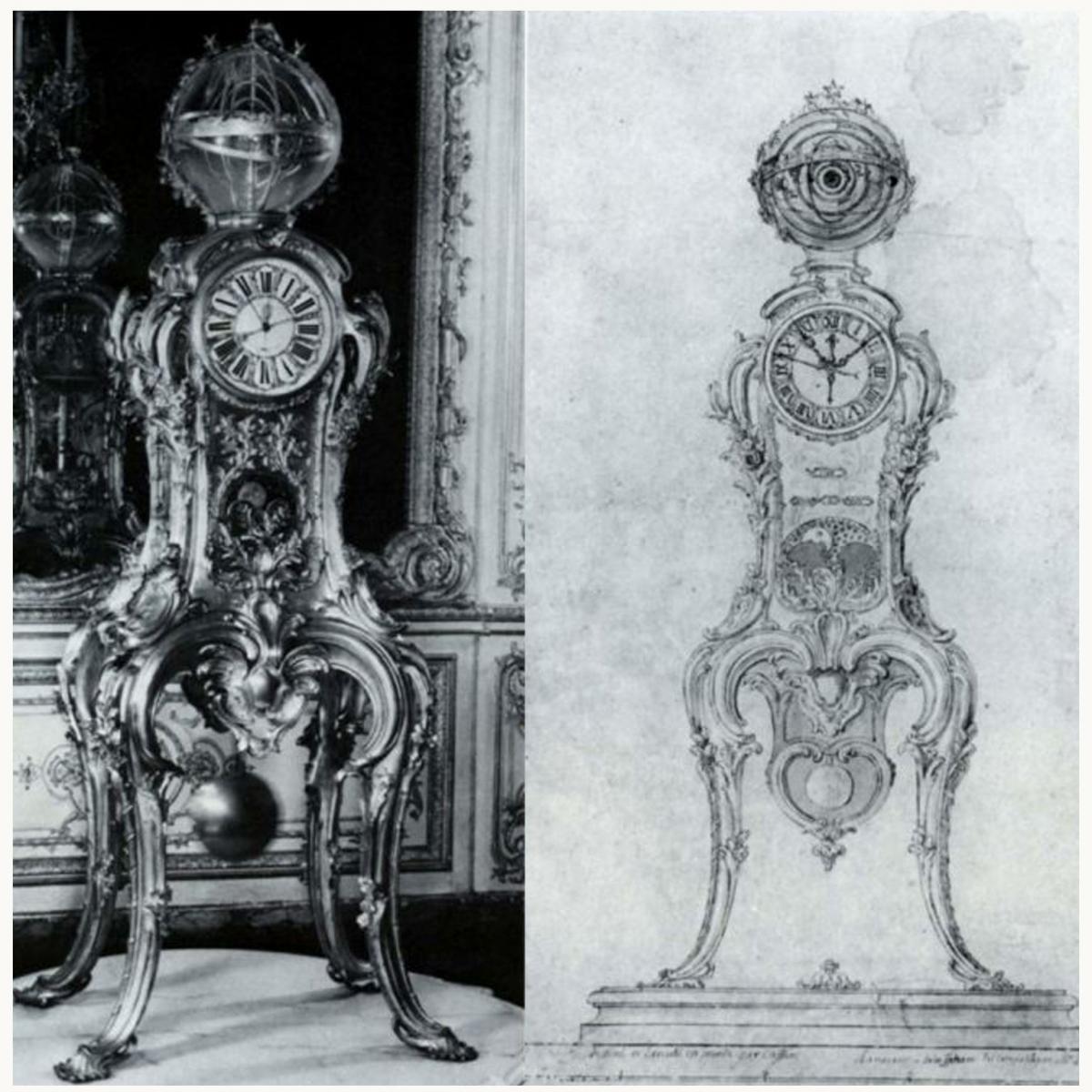 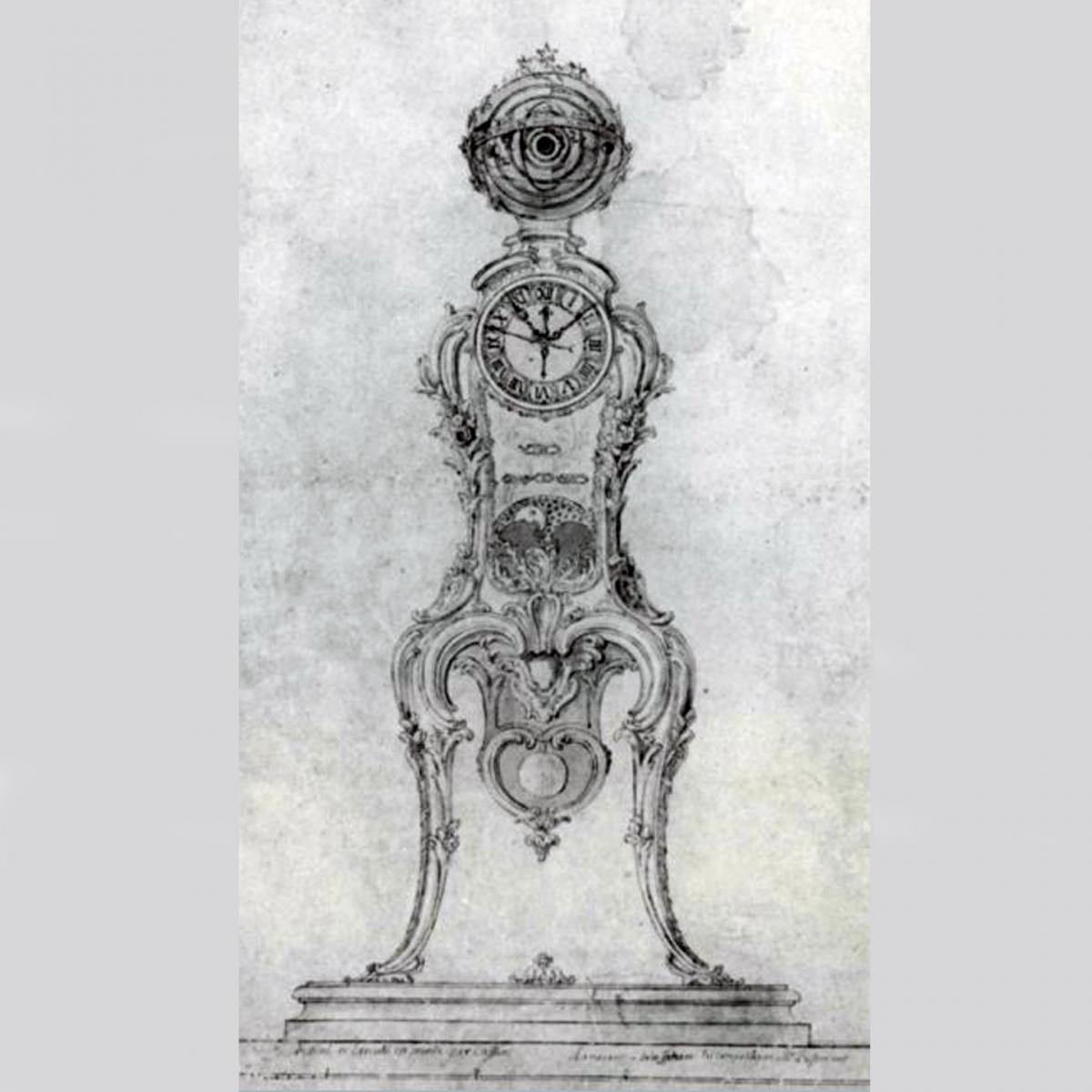 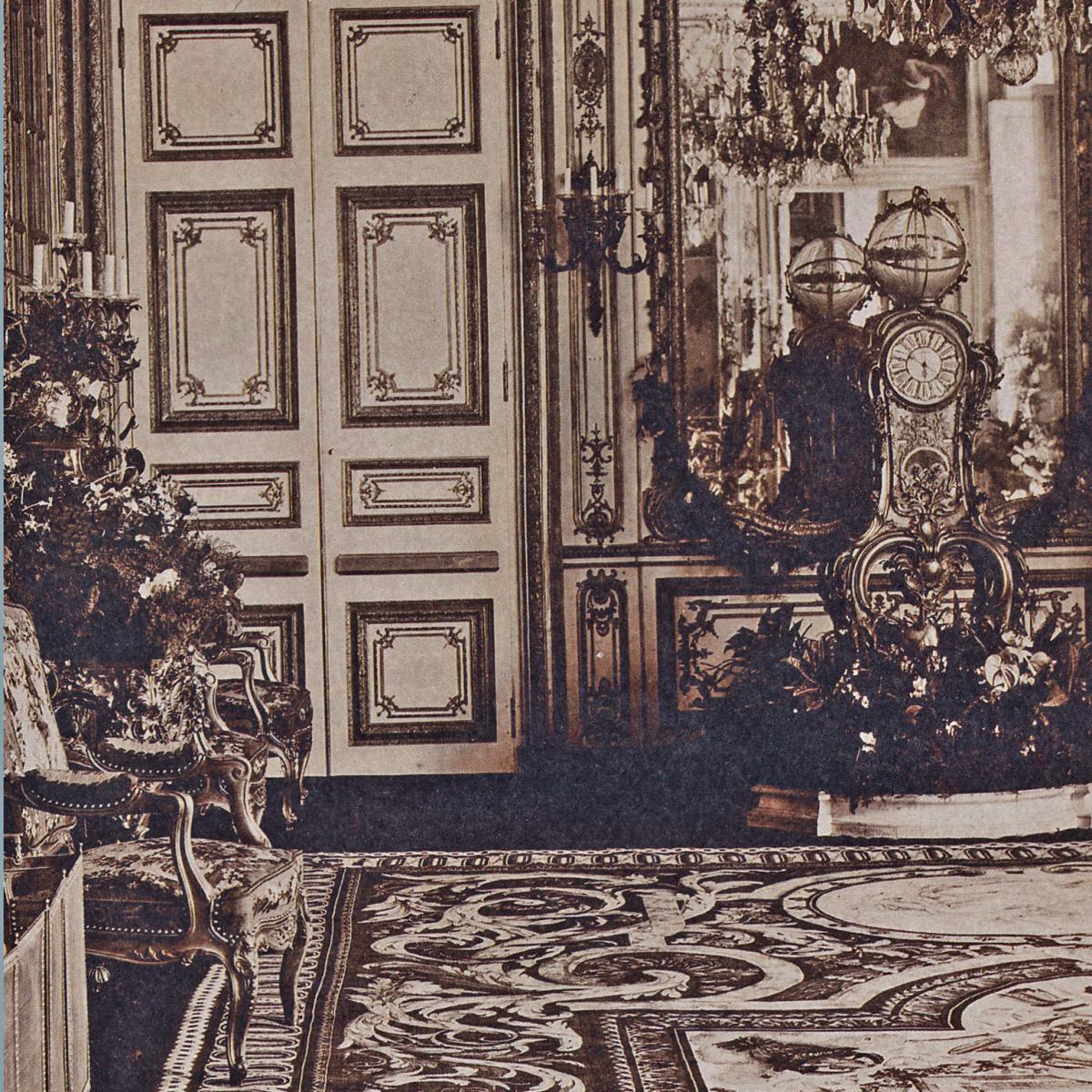 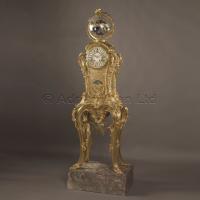 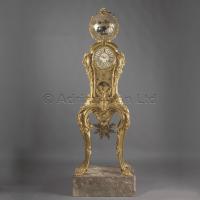 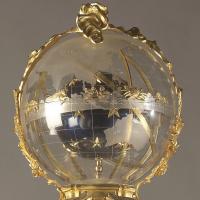 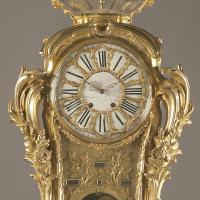 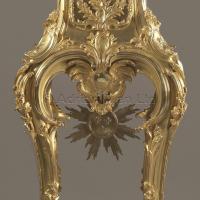 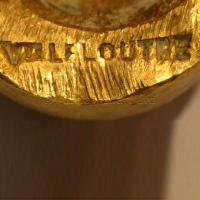 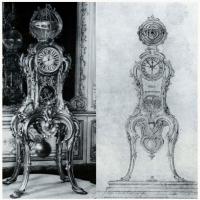 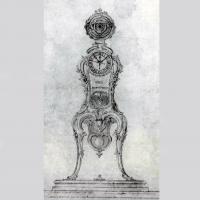 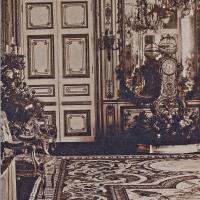 An Exceptional and Highly Important Louis XV Style Astronomical Regulator Clock, Attributed to François Linke, After The Model by Passement and Caffieri for Louis XV.

This extraordinary gilt bronze regulator has an armillary sphere adorned with stars, banded by an equatorial ring, decorated with the signs of the zodiac, the months of the year and foliate garlands to the upper section.  The gilt bronze case is richly ornamented with scrolling acanthus, foliate forms and cartouches representing the four seasons.  The clock stands on four scrolling cabriole legs, mounted with fronded acanthus and terminating in palmette feet.

Linke first became interested in producing a model based on Louis XV's famous Astronomical Regulator, when a version was made for Lord Hertford at the end of the nineteenth century.  Christopher Payne notes that Linke made two examples, the first undated except for a note that the  widow Leloutre did some work on 'La Boule' in May 1900 and a second made between 1910 and 1912;  both clocks were chased by Goujon and gilded by Picard,  (Christopher Payne, p. 210).

In 1905 Linke bought a master pattern for the Regulator from the bronze clock and watch maker Dostal, who was established at Avenue Daumesnil, Paris, and who had himself purchased the pattern from the second sale of Millet's inventory in May of that year.  Interestingly Christopher Payne notes that the original catalogue description in the Millet sale included an intriguing annotation: 'Mod. Prov de Caffieri', a contemporary belief was that this was the master pattern from the eighteenth century.

This regulator is based upon the famous astronomical clock by Jacques and Philippe Caffieri, made for Louis XV in 1753, for Châteaux de Choisy and moved in 1754 to the Salon de la Pendule at Versailles.  The movement, the result of twelve years collaboration between the engineer Passement and the clock maker Dauthiau, was of such complexity that the regulator not only indicated mean and solar time, information about the sun and moon and orbital position of the planets, but was programmed to function until 9999, and to include adjustments for leap years.

The case of the Versailles Clock is a superb example of the mature rococo style, which was prevalent in the 1750's, and displays the exceptional quality of Caffieri's bronze work.   Jacques Caffieri (1678-1755), was the fifth son of Philippe Caffieri (1634-1716), who emigrated from Naples at the request of Cardinal Mazarin to decorate the interiors at Versailles. He was elected to the Académie de Saint-Luc as a sculptor, and thus created many of the original designs that were proprietary models of his foundry. From 1736, when he was appointed Fondeur-Ciseleur des Bâtiments du Roi, Caffieri remained in the employ of the French Crown.  It is certain that father and son worked together on the bronze case of this regulator for Louis XV.  The style owes much to the elder Caffieri's imaginative handling of the rocaille, combining boldly articulated forms with an uncompromising quality of finish.

Excluded from the revolutionary sales, the regulator remained at Versailles until it was moved to Paris in 1797.   Three years later in April 1800 Passement's masterpiece was entrusted to Antide Janvier who was to undertake repairs of the movement.  Unfortunately Janvier, former clock maker to the King went bankrupt and pawned the bronzes in 1809.  Eventually the clock was repaired at the end of the Restauration Period and taken back to the Hotel des Menus-Plaisirs in rue Bergère, Paris.  Louis Philippe returned it to its rightful place in the Salon de Pendule at Versailles in 1833, where it remains to this day.

Linke’s chose to set his version with the calendar permanently fixed to Jeudi 5 October 1789. This key date was the Women's March on Versailles, also known as The October March, The October Days, or simply The March on Versailles, was one of the earliest and most significant events of the French Revolution. The march began among women in the marketplaces of Paris who, on the morning of 5 October 1789, were near rioting over the high price and scarcity of bread. Their demonstrations quickly became intertwined with the activities of revolutionaries who were seeking liberal political reforms and a constitutional monarchy for France. The market women and their various allies grew into a mob of thousands and, encouraged by revolutionary agitators, they ransacked the city armory for weapons and marched to the Palace of Versailles. The crowd besieged the palace and in a dramatic and violent confrontation they successfully pressed their demands upon King Louis XVI. The next day, the crowd compelled the king, his family, and most of the French Assembly to return with them to Paris. These events effectively ended the independent authority of the king. The march symbolised a new balance of power that displaced the ancient privileged orders of the French nobility and favoured the nation's common people, collectively termed the Third Estate. Bringing together people representing disparate sources of the Revolution in their largest numbers yet, the march on Versailles proved to be a defining moment of that Revolution. 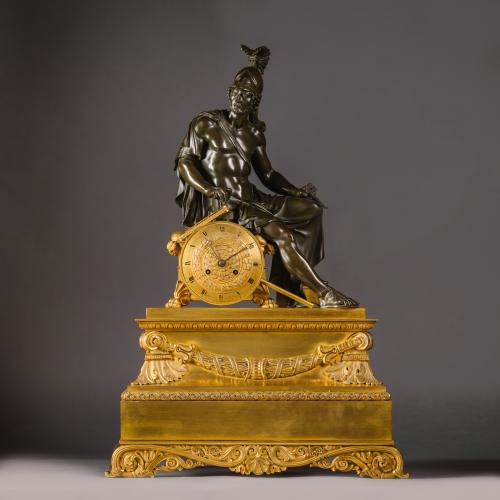 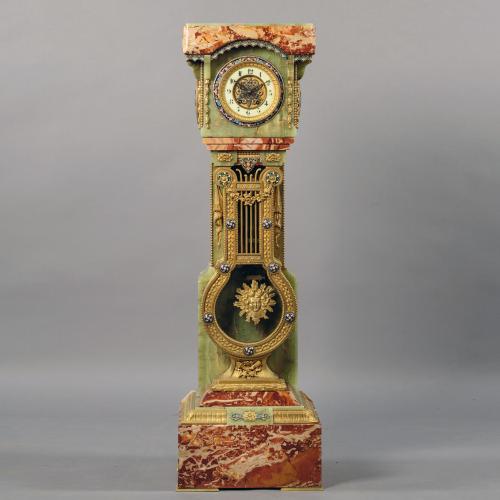 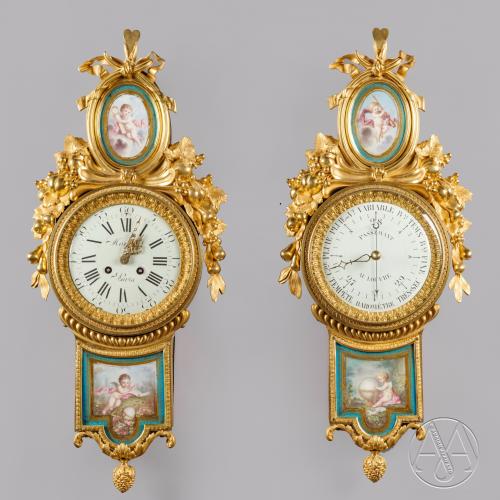 A Fine Louis XVI Style Gilt-Bronze and Sèvres Porcelain Mounted Cartel Clock and Aneroid Barometer En Suite, After the Models by Martinout and Passemant.
Adrian Alan
View all from this dealer