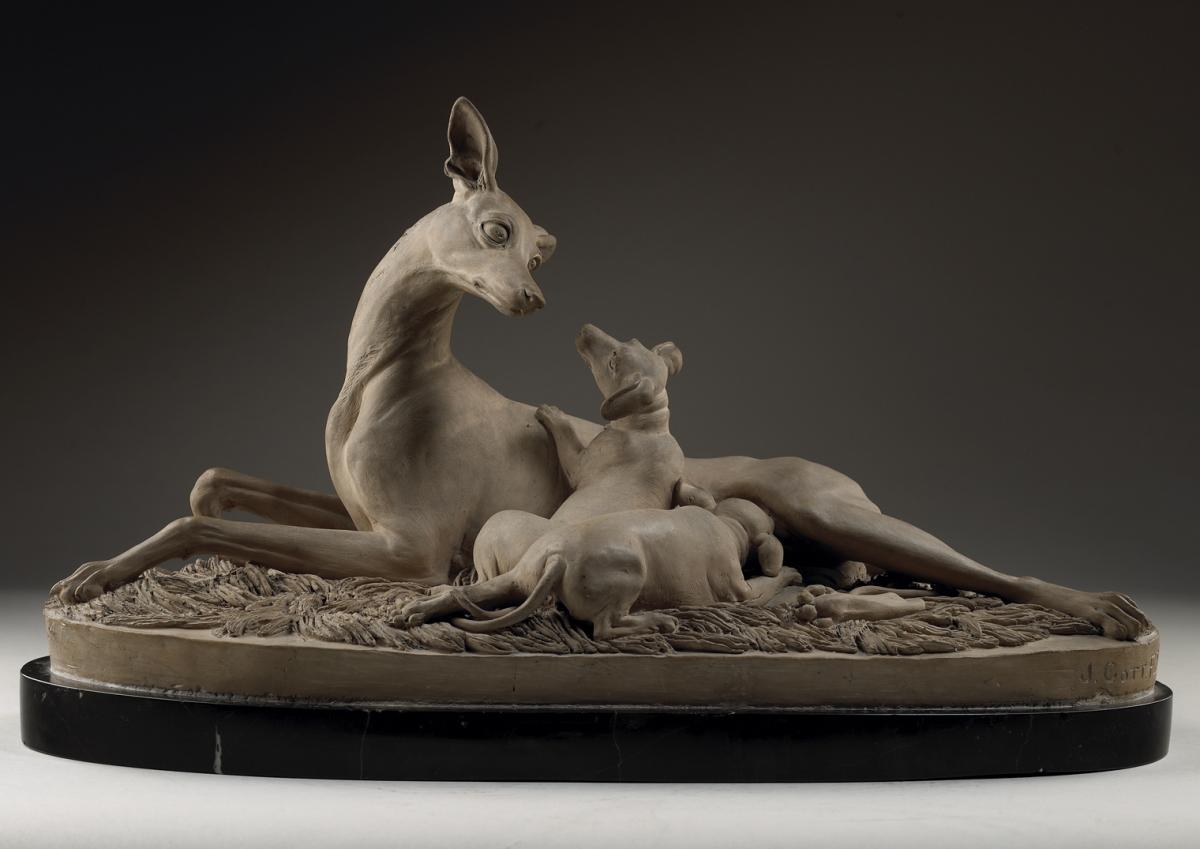 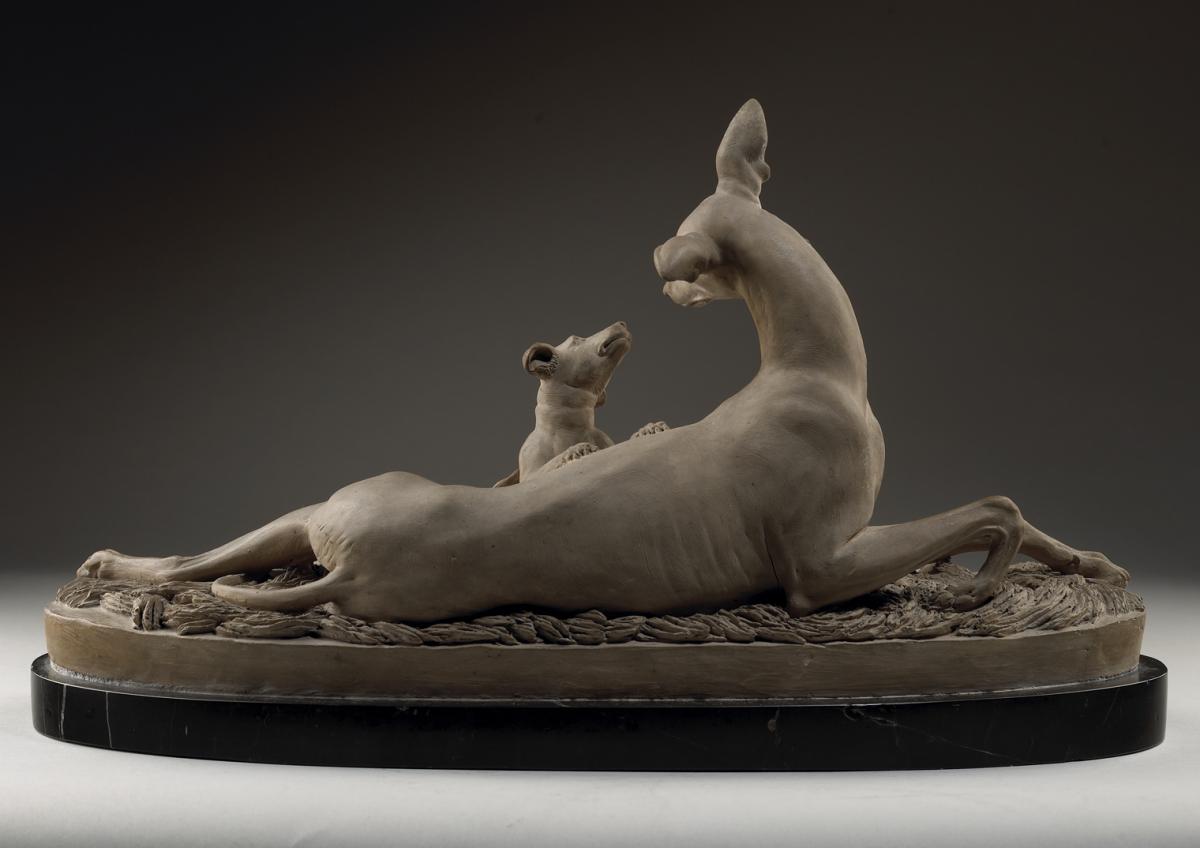 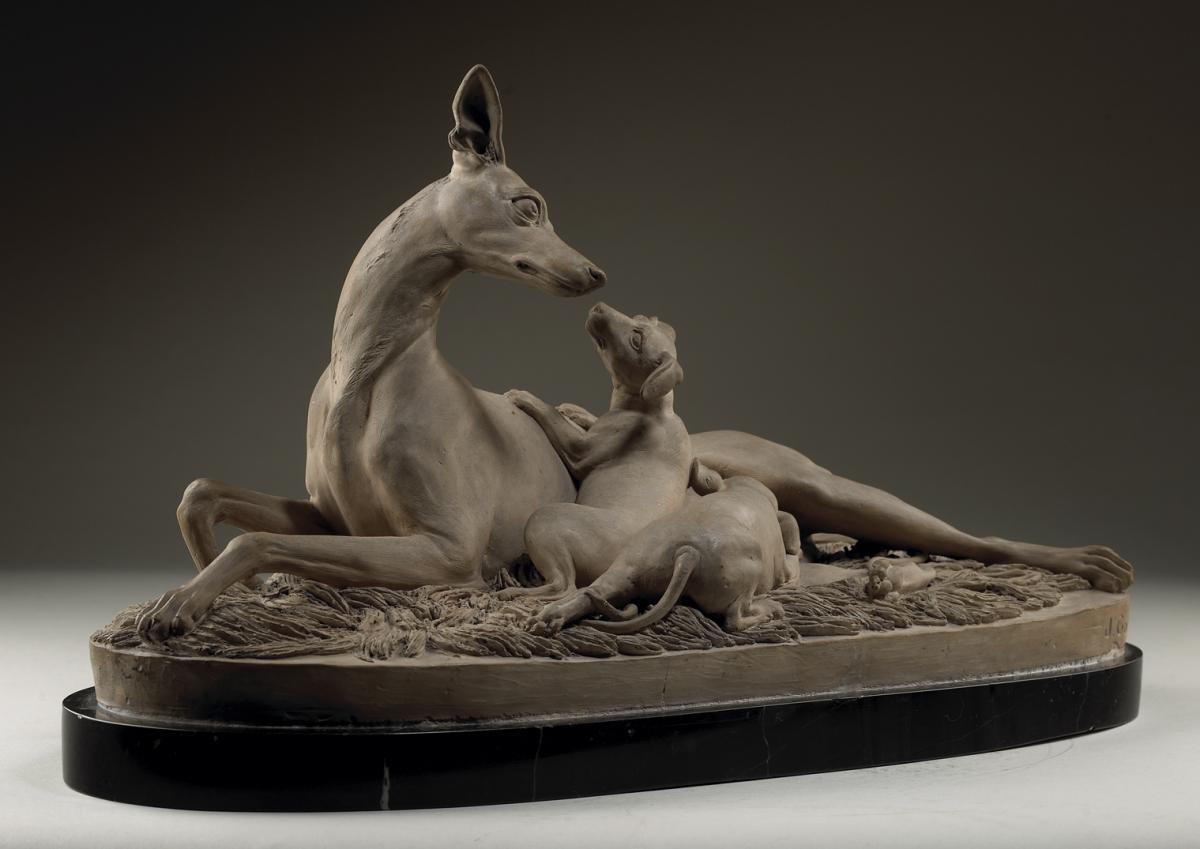 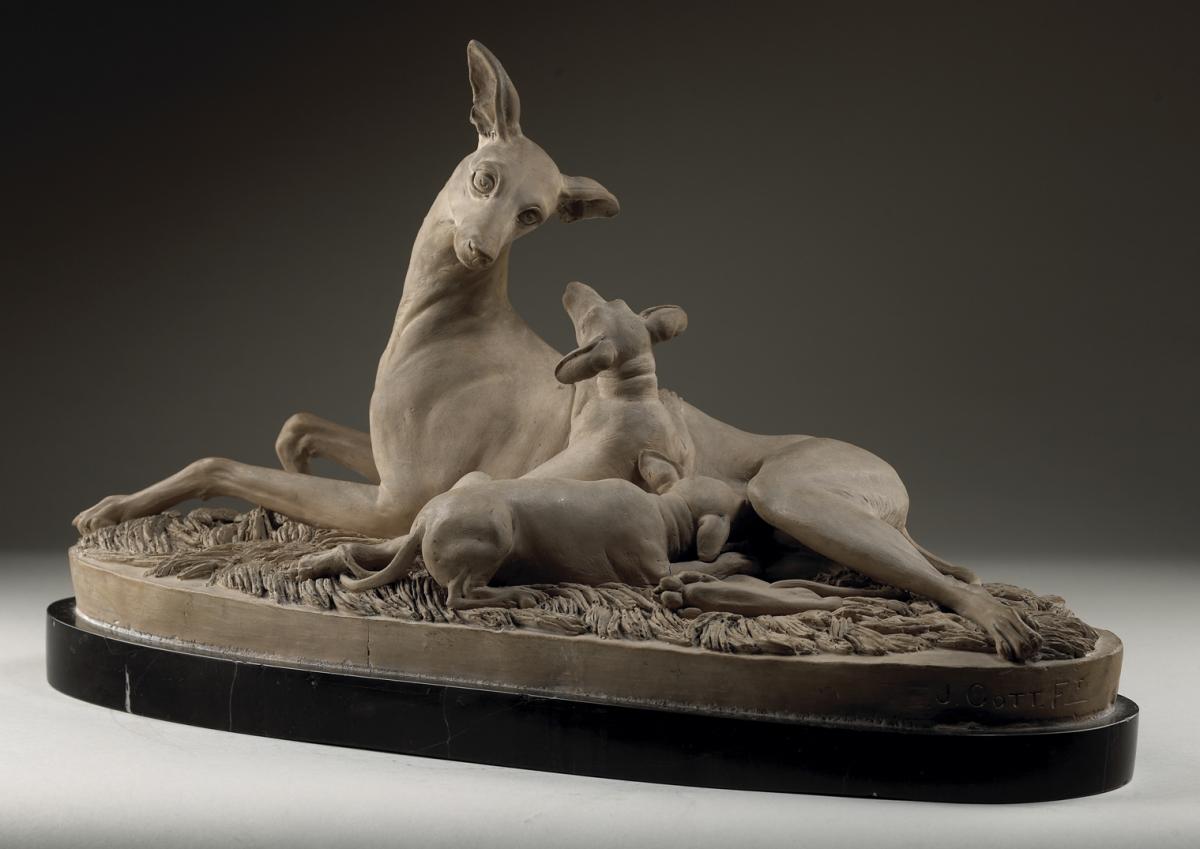 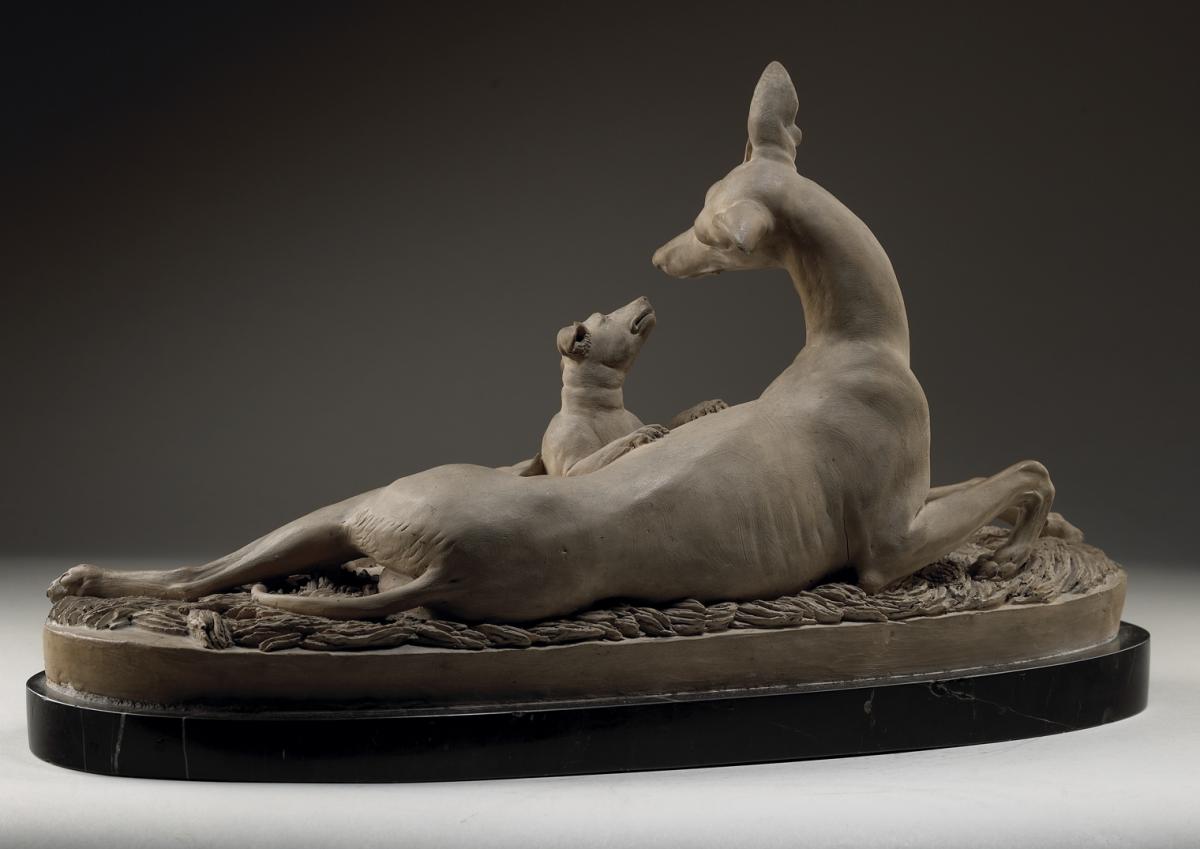 Joseph Gott (1785 – 1860) is considered to have been amongst the finest British sculptors working in the first half of the nineteenth century. He achieved international renown, yet had strong links to the English county of Yorkshire in that his most important patrons included the family (and circle) of his second-cousin, the Leeds-based industrialist Benjamin Gott (1762 – 1840), who had made his fortune in the wool-trade and became Mayor of the city in 1799. After moving to Rome in 1822, Joseph Gott became part of a vibrant British artistic community working in the city, which included eminent names such as Charles Eastlake (1793 - 1865), John Gibson (1790 - 1866), Richard James Wyatt (1795 – 1850), Seymour Kirkup (1788 - 1880) and Joseph Severn (1793–1879). These compatriots provided a vital network of mutual support, and strong ties developed between them whilst in Italy. For example, Gott’s housemate, the painter Joseph Severn (1793–1879), wrote to his father that “Mrs Gott prepares all the meals in the house and we all eat together – this is like being at home to me – we have an English pudding every day – this young Man has a very wonderful talent.”

Gott had entered London’s Royal Academy in 1805, after having trained under the sculptor John Flaxman between 1798 and 1802. The Academy’s then president, the eminent painter Sir Thomas Lawrence, awarded Gott a pension for his travels in 1822, complete with a personal letter of introduction to Europe’s greatest living sculptor, Antonio Canova (1757 – 1822). Gott remained in Rome for the rest of his life and built a studio that became a central attraction to English tourists, as his obituary in The Athenaeum made clear: “Every visitor to Rome, this half century past, has looked in at the studio of M.Gott…”

His artistic practice had significant classical foundations. These took the shape of a deep-reverence for the finest examples of sculpture surviving from antiquity, and dedicated academic study of the male and female nude. Indeed, Lawrence requested in the letter of recommendation he wrote for Gott to Canova, that the great Italian “perhaps extend to him your generous assistance in his study of any fine Works of Antiquity that may not be within the reach of common observations.” These activities were in accordance with the pedagogical zeitgeist of the European Academies of the period, but what sets Joseph Gott apart from his peers at this time was the particular strain of classicism he developed. It was infused with a sensitivity, sensuality and romanticism not seen in the work of his compatriots in Rome, such as Richard James Wyatt (1795 – 1850) and John Gibson (1790 - 1866). They, like many, had fallen under the spell of Canova and Thorvaldsen’s comparably austere, ‘neo- Greek’ iteration of the Neoclassical idiom. However, Gott’s works concerned rather more heartwarming subjects than the deeds of other-worldly Olympians. They were often depictions of playful or loving children and animals, made in terracotta on an intimate scale, which encouraged these delicate objects to be cradled and enjoyed at close quarters. The painter Thomas Unwins wrote glowingly of Gott’s talents to Lawrence from Naples in 1825:

“He is a man of first rate genius. His works have been distinguished by the most fertile invention; powerful conception of expression; a high feeling of the beauty of female form; a fine taste and correct judgement - and the whole mingled together by that quality peculiar to genius, which I think Lord Verulam calls ‘Felicity’ – everything he does seems a creation of his own mind. You do not think it beautiful because it is like this or like that amongst the admired works of other men and other ages but because it rises up before you in its own individual character, and appeals at once to the sympathies and associations common to humanity…”

This charming group of a Greyhound playing with her two puppies is related to the most important commission of an animal subject that Gott received. This was for ‘A Greyhound with her two Puppies suckling’, as instructed by the 6th Duke of Devonshire between 1823 – 1824 and completed in 1825. Albeit seemingly different in spirit from the work of the ancients, Gott’s animals were inspired by the classical past, which is rich in examples of carefully and realistically modelled hounds, lions, panthers and more. If one thinks of the magnificent ‘Sala degli Animali’ in the Vatican, the Horses of St. Mark’s Square, Venice, or the Equestrian statue of Marcus Aurelius on the Capitoline Hill, it is undeniable that they truly mastered the genre and inspired many later sculptors, not least Joseph Gott.