A gold, enamel and cameo commemorative pendant by William Tassie, 1805 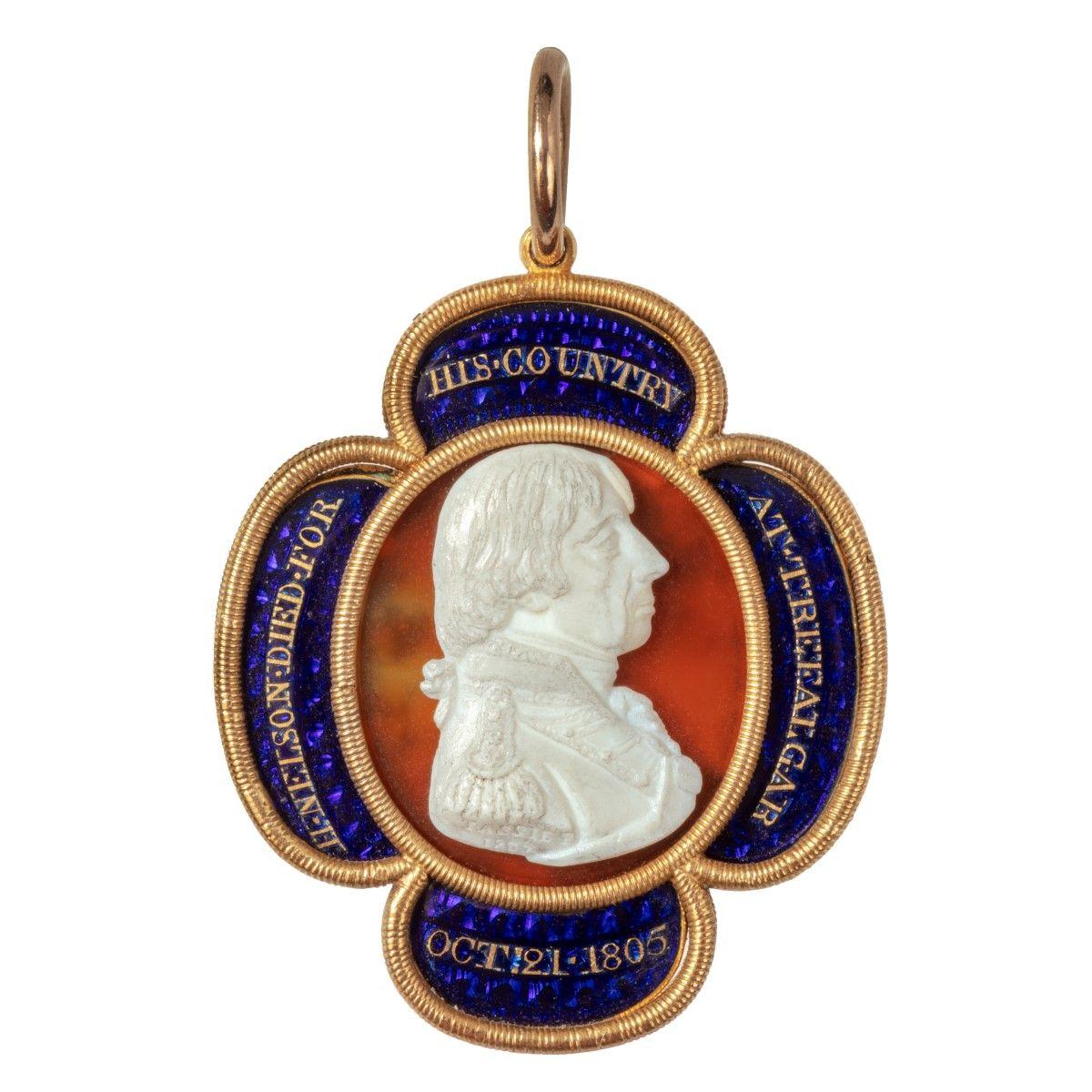 The enamelling on this quatrefoil gold pendant is attributed to Ray & Montague: ‘hiltmakers, goldworkers and enamellers’.

The obverse is mounted with a vitreous paste profile portrait cameo of Admiral Viscount Nelson within four navy blue enamel panels with the gilt inscription: ‘H·Nelson·Died·for His·Country at·Trafalgar Oct:21·1805’ all within ropework borders.

The reverse is mounted with an oval polychrome enamel plaque representing a blue Royal Navy ensign flying triumphant above the flags of France and Spain superimposed with an anchor and laurel wreath against a red background within four navy blue enamel panels with the gilt inscription: Glory to the Souls of the Brave, a line from The Battle of the Baltic written in 1801 by Scottish poet Thomas Campbell (1777-1844) to commemorate Nelson’s victory at the Battle of Copenhagen.

John Ray and James Montague succeeded to the celebrated enamelling and goldsmithing firm of James Morisset (1738-1815) in 1800.

Like Morisset, they specialised in presentation swords and gold boxes, making and decorating in enamel the gold swords awarded to Admirals Collingwood and Northesk after the battle of Trafalgar.

William Tassie (1777-1860) was a prolific and highly successful maker of intaglios and cameos, reproduction gems and medals, many cast in a glass paste developed by his uncle James Tassie to whose thriving business he had succeeded in 1799.

Like many London firms, Tassie took commercial advantage from the victory at Trafalgar producing large numbers of cameos of Nelson of varying sizes to supply the public appetite for souvenirs.

As he wrote in December 1805:
...respecting Lord Nelson’s Portrait, we have been so busy making small ones for the Jewellers (the size of rings and brooches) that I had no time to finish a large Portrait before this time.

But I have got one finished nearly the size of Lord Duncan. It is mostly done from De Koster’s Print and is thought like. Lady Nelson has had three of the small heads on Cornelian brooches.