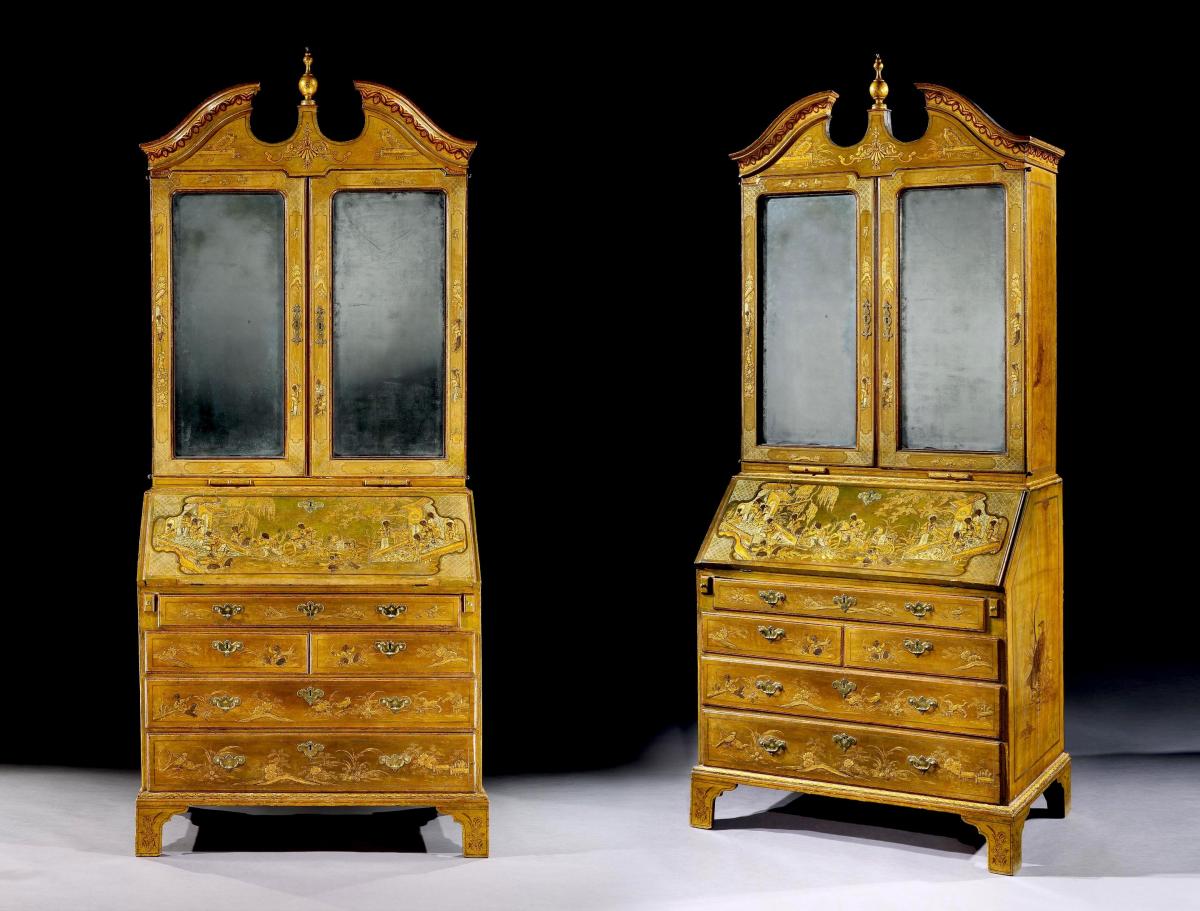 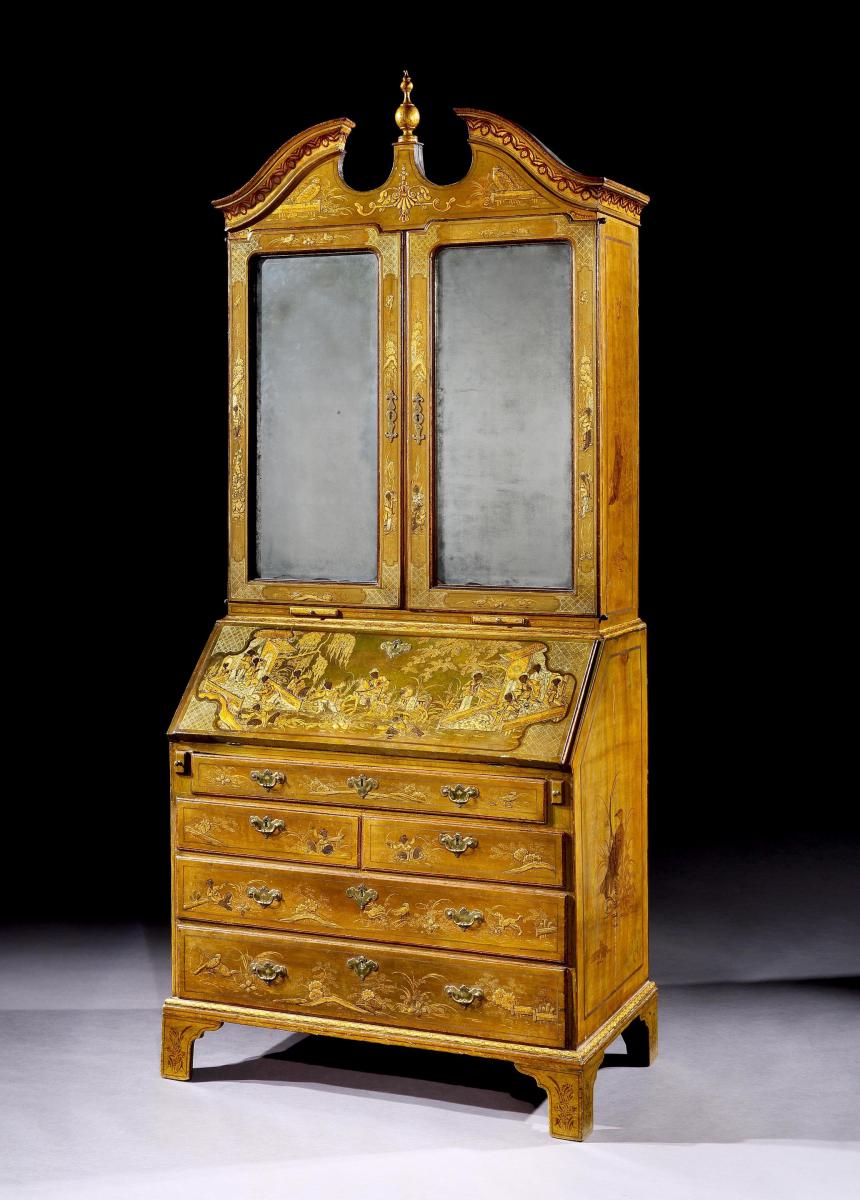 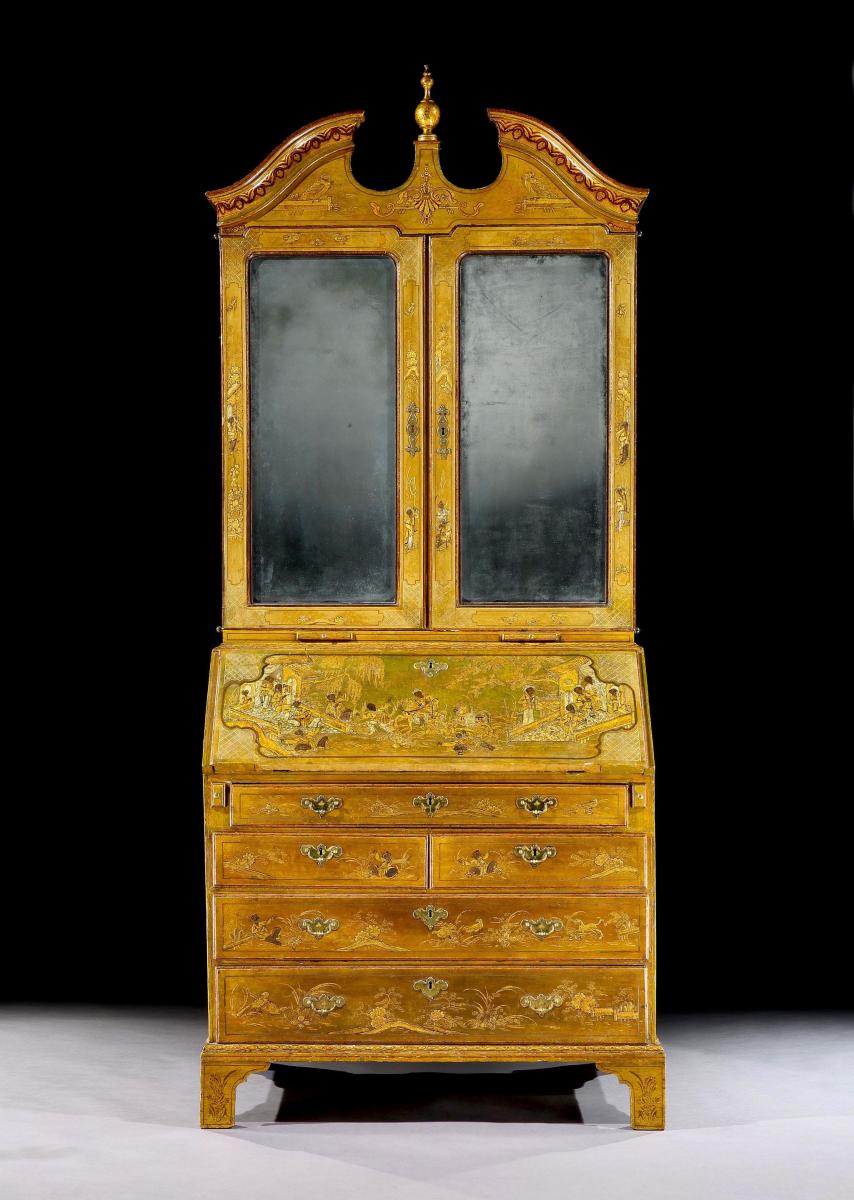 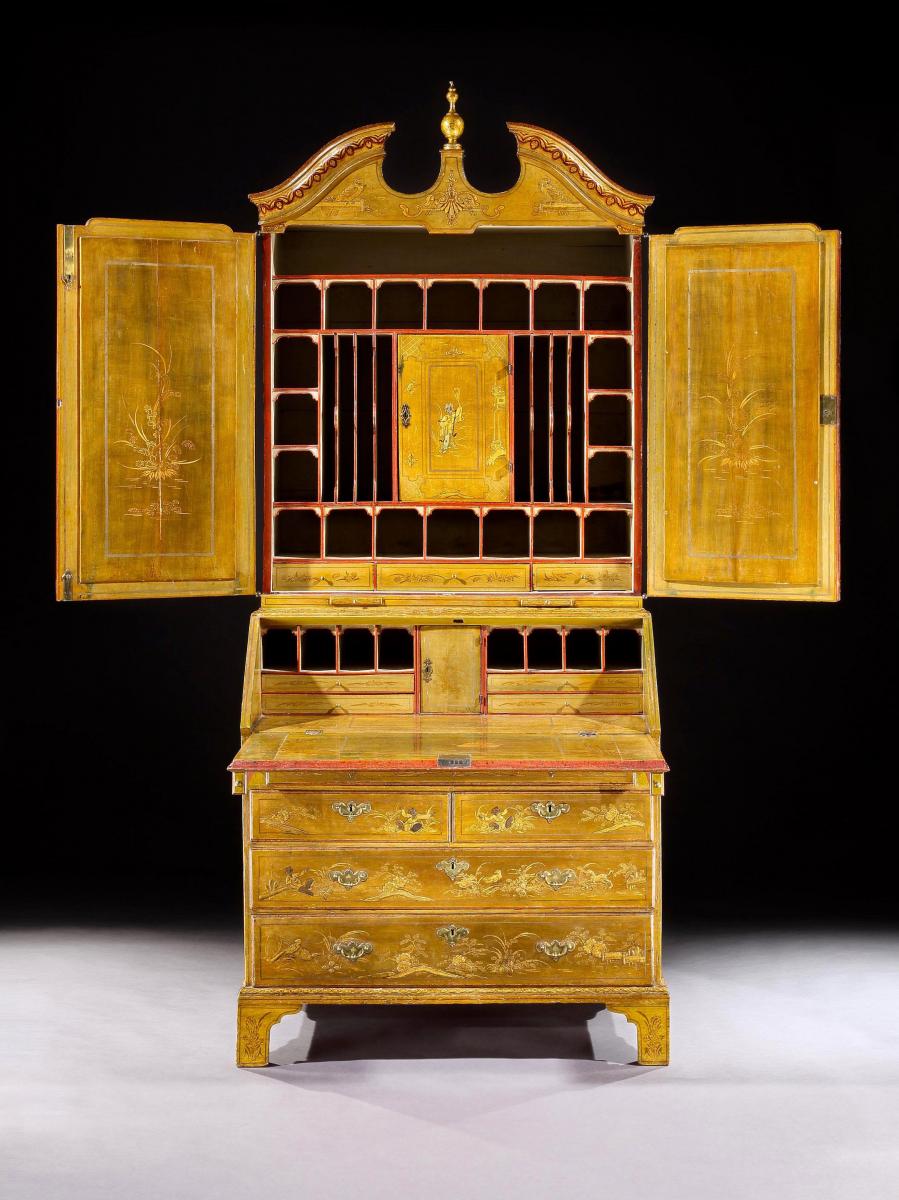 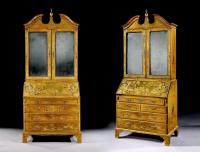 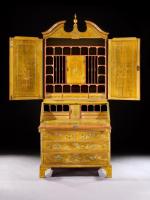 Each with broken swan neck pediment cresting surmounted by a turned golden finial, the upper section with two doors fitted with beveled mirror plates which open to reveal, on the reverse, panels of floral chinoiserie decoration, and an interior fitted with pigeonholes and folio shelves of varying sizes

With a central door decorated with chinoiseries, standing above a fall front bureau section enclosing further drawers and pigeon holes, below is a single drawer in the frieze above two short and one long drawers, the whole standing on bracket feet. The bureau decorated throughout with outstanding gilt chinoiseries on an incredibly rare olive green ground.

Giles Grendey was a leading London cabinet maker, born in Wooton-under-Edge in Gloucestershire. Grendey was the apprentice to the London joiner William Sherborne, becoming a freeman in 1716. Taking his own apprentices by 1726, Grendey was elected to the Livery of the Joiners’ Company in 1729. His first workshop was at St. Paul’s, Covent Garden, and he moved to St. John’s Square, Clerkenwell in 1772 where he developed a thriving export trade.

There is not a great deal of extant information on Grendey’s English clients, however there is a bill from Richard Hoare of Barns Elms, Surrey that is dated 1723 and includes a chest of drawers, a ‘Burow Table,’ dressing glasses, chimney glasses, and a ‘Wrighting Disk.’ Henry Hoare’s account book lists payments between 1746-56 for £46 for chairs. Lord Scarsdale of Kedleston Hall, perhaps the most prominent known patron, acquired ‘1 Fine Jamai. Mahog. Plank’ for £21 in 1762. He also provided furniture for Sir Jacob de Bouverie at Longford Castle and Henry Hoare at Stourhead.

Grendey was one of only a few English cabinetmakers to affix trade labels to his furniture. This record helps to provide additional information on Grendey’s clients and work. There are a few extant pieces that retain his labels, including a few pieces from Infantado Suite which feature the stamped initials of workmen in Grendey’s employ. His labels advertised that he ‘makes and sells all sorts of cabinet goods, chairs, and glasses.’ According to R. W. Symonds, Grendey is the only English furniture maker of whom definite evidence exists of his thriving export trade.

One record of his exportation of goods was reported in various newspapers on August 7, 1731 after a fire started on adjacent premises to Mr Grendey ‘a Cabinet-maker and Chair-maker.’ This devastating fire caused him to lose furniture to the value of £1,000, including one particular piece which was described as: ‘among other rich and valuable Goods was burnt a Chair of such rich and curious Workmanship… it being intended, to be purchas’d by a person of Quality who design’d it as a Present to a German Prince,’ which he ‘had packed for Exportation against the next morning’.

Furniture made in London for the Spanish market in particular invariably displayed distinctive features that were designed to appeal to the Spaniard’s love of opulence. Wealthy Spaniards’ affinity for lacquer over traditional English timbers of walnut and mahogany at a time when the dominant demand in England was for walnut and mahogany. Giles Grendey and other firms involved in the export trade therefore produced japanned pieces as it emulated the appearance of lacquer.

The fashion for japanning began in earnest following the publication of John Stalker and George Palmers’ publication, A Treatise on Japanning and Varnishing, in 1688. This guide offered a thorough description of the japanning technique as well as decorative schemes to use. These bureaus draw direct inspiration from this treatise, including the skillful application of highlighted areas and altering gilded tones raised in bas-relief.

It is most unusual to see pairs of bureau bookcases made in England in the eighteenth century, and the few that exist were known to be made for the export market, particularly for Spain and Portugal. One of the most renowned pairs is attributed to James Moore and is decorated entirely in gilt gesso. Originally two pairs of these extraordinary gilt gesso bureaus were made for the Portuguese Royal Court, and today two survive in their original gilded state, one of which is in the Mackinnon Fine Furniture collection. In another rare instance, two pairs of the bureau bookcases were made as part of the impressive suite of furniture known to be made by Giles Grendey for the Dukes of Infantado and later destined for Lazcano Palace in magnificent scarlet japanned decoration.

A pair of George II white and blue japanned bureau bookcases are known to exist. These are signed by John Golding and William Rider, two journeymen presumed to be part of Giles Grendey’s workshop.

Mallett & Son (Antiques) Ltd had the good fortune of reuniting a pair of small scarlet japanned bureau bookcases—one in England and the other in Spain, which surfaced in 1969.

The fashion for these pairs derives from the import of exotic lacquer cabinets from the East India Companies that were often made in pairs.