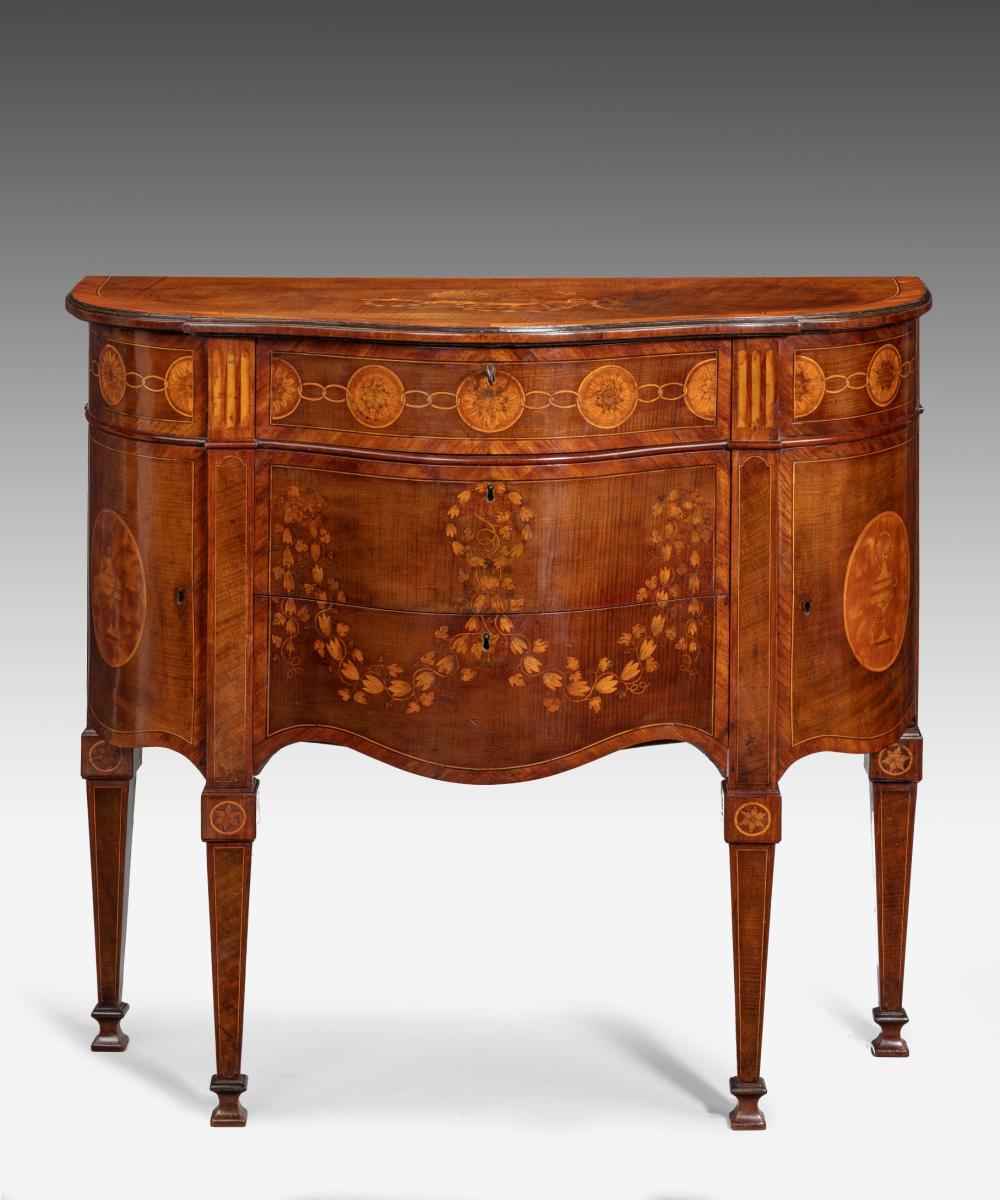 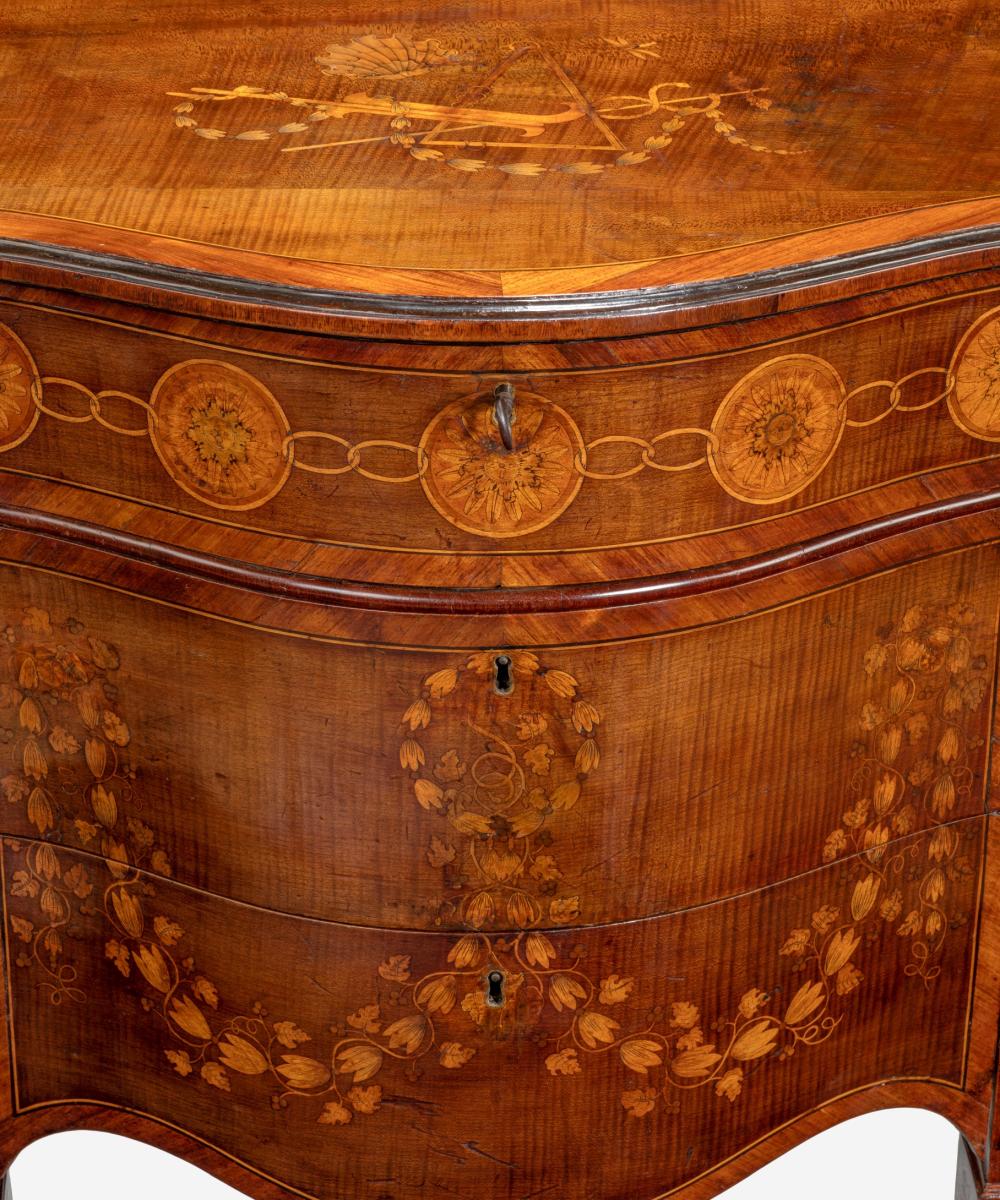 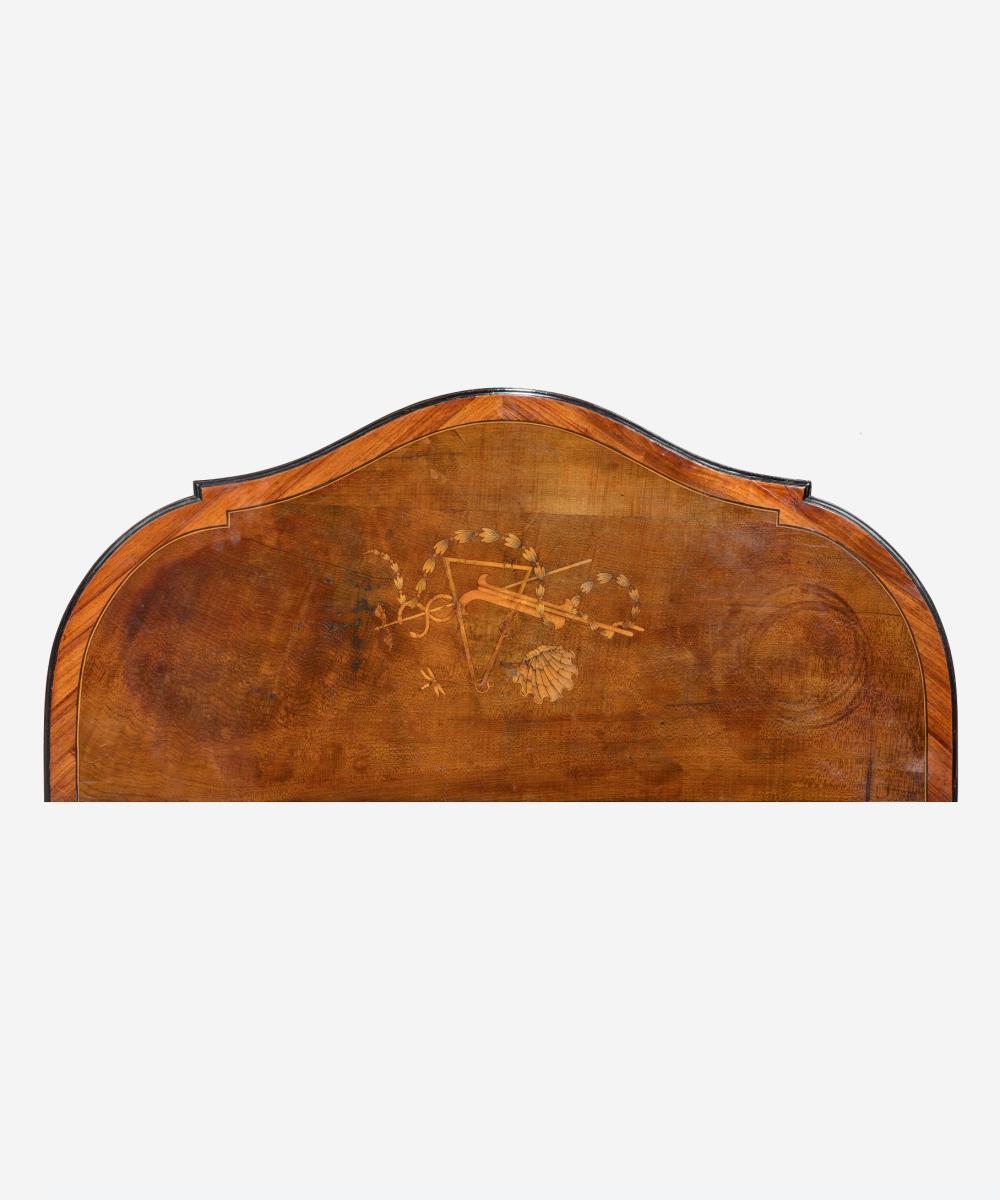 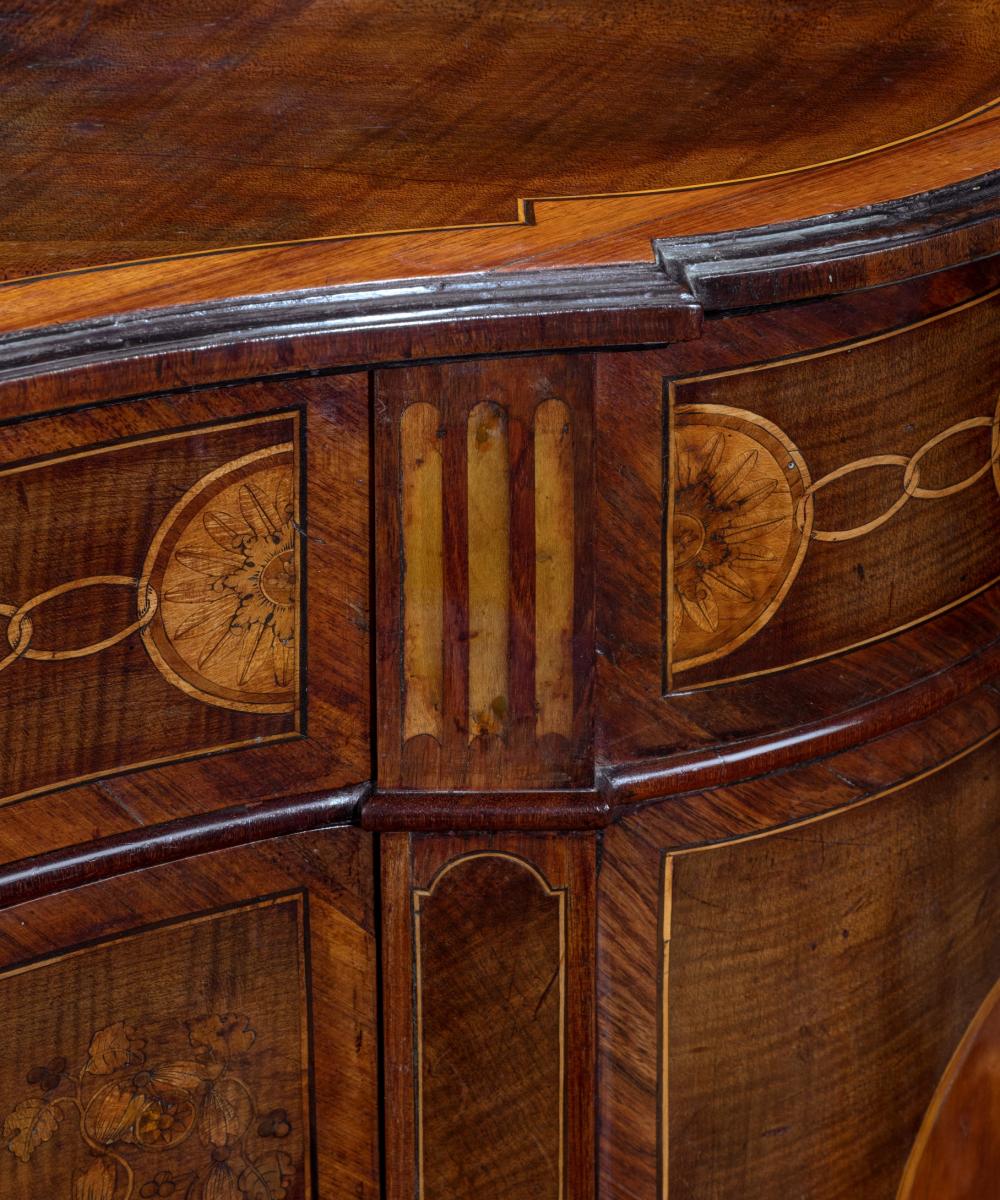 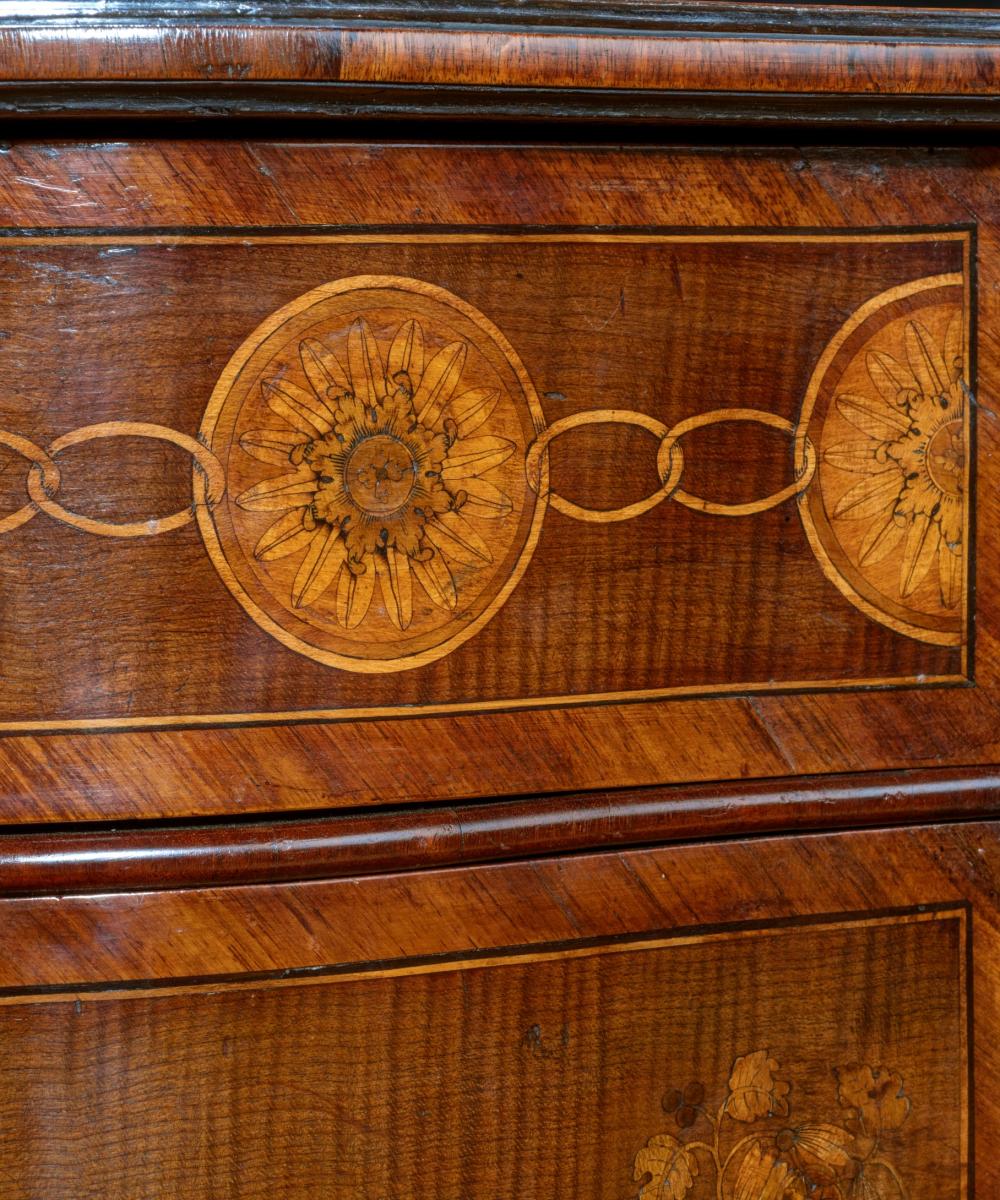 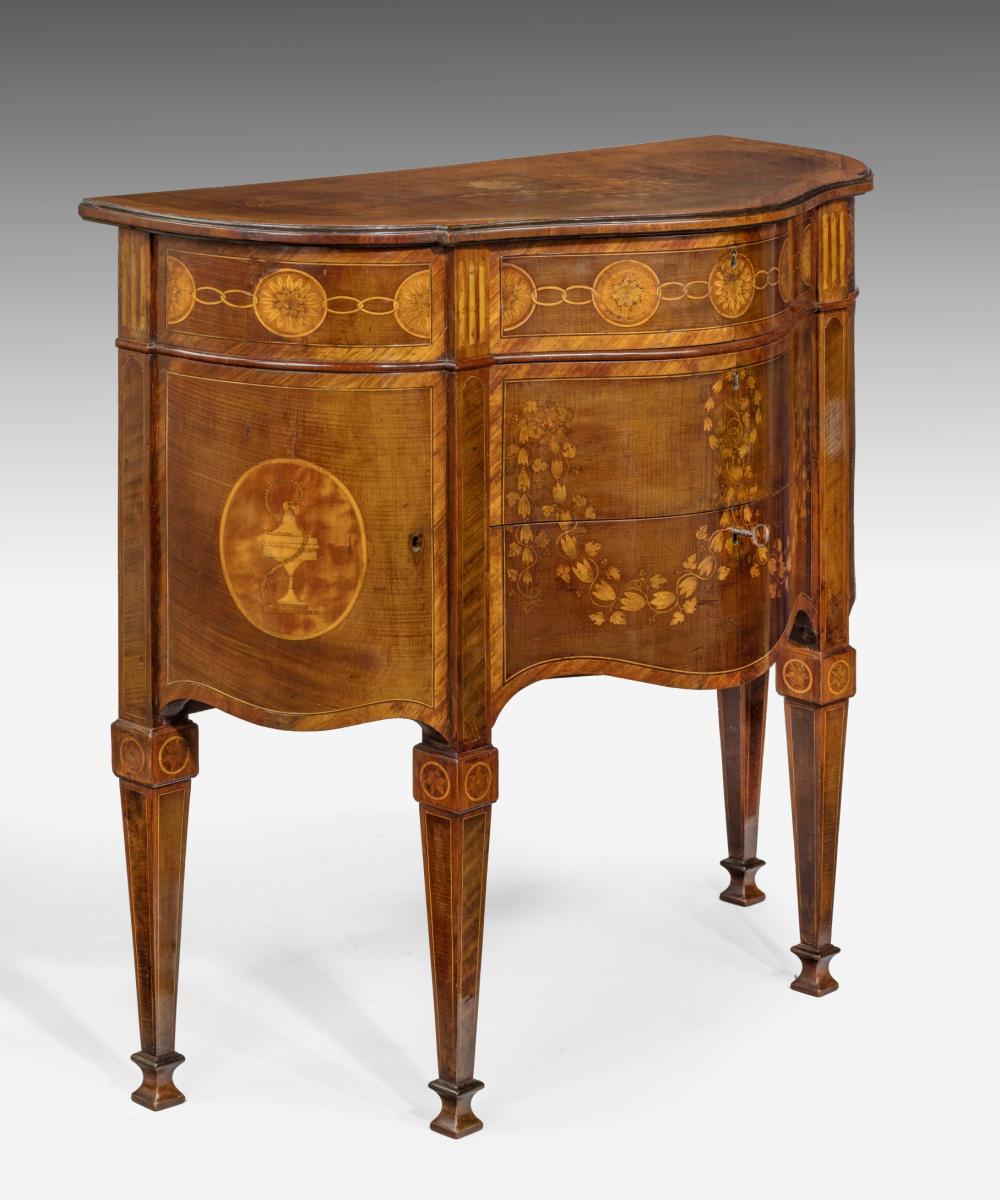 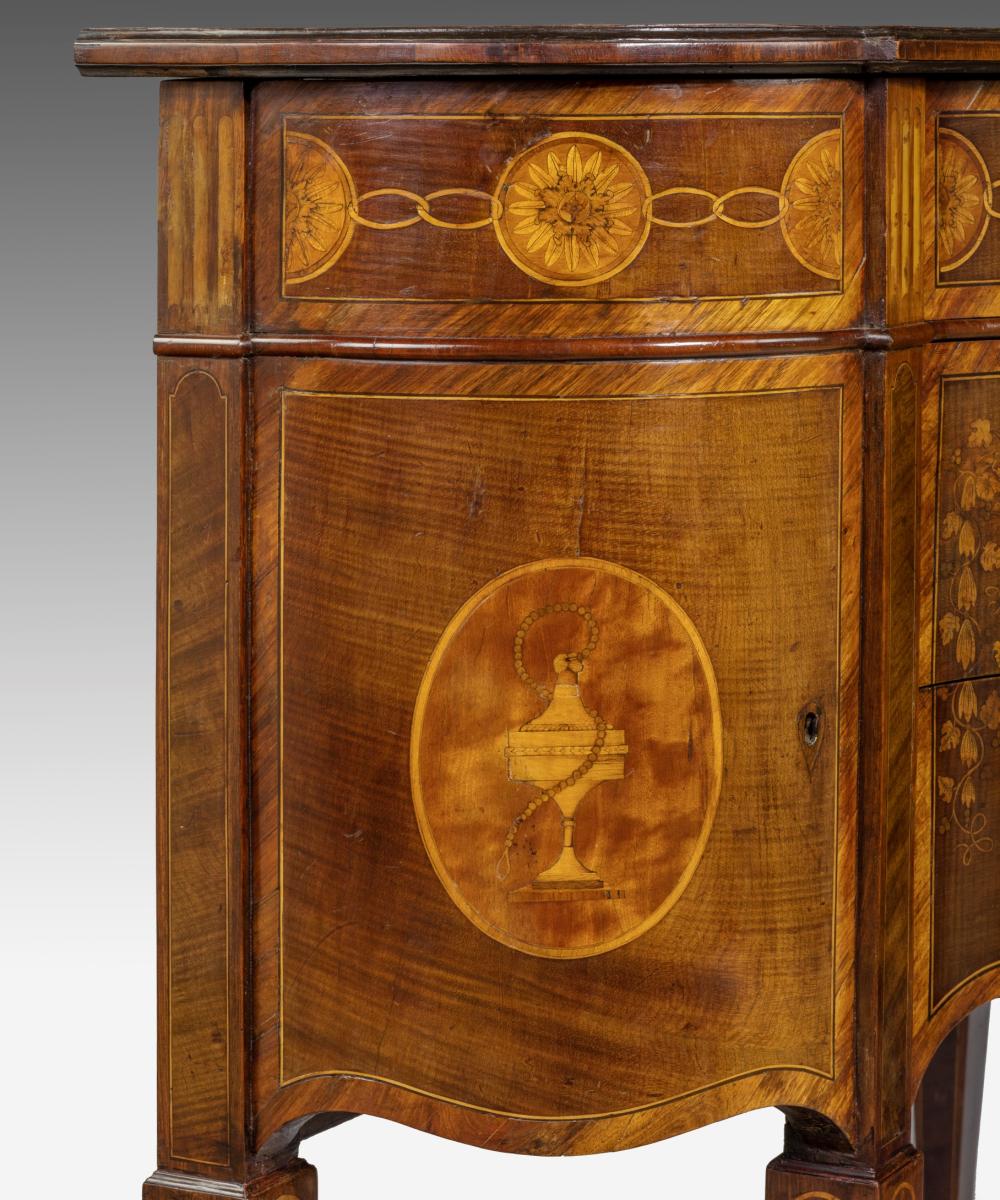 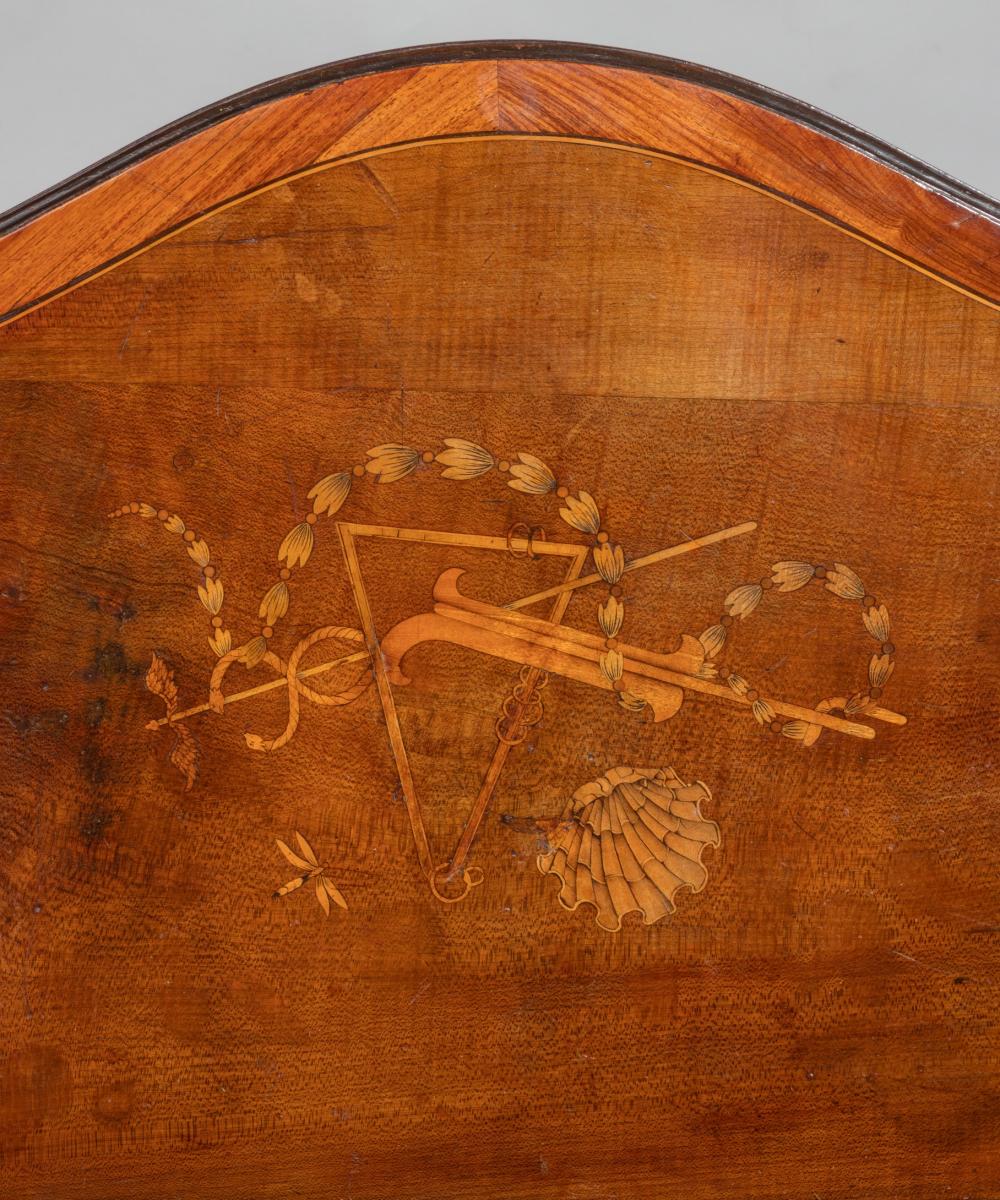 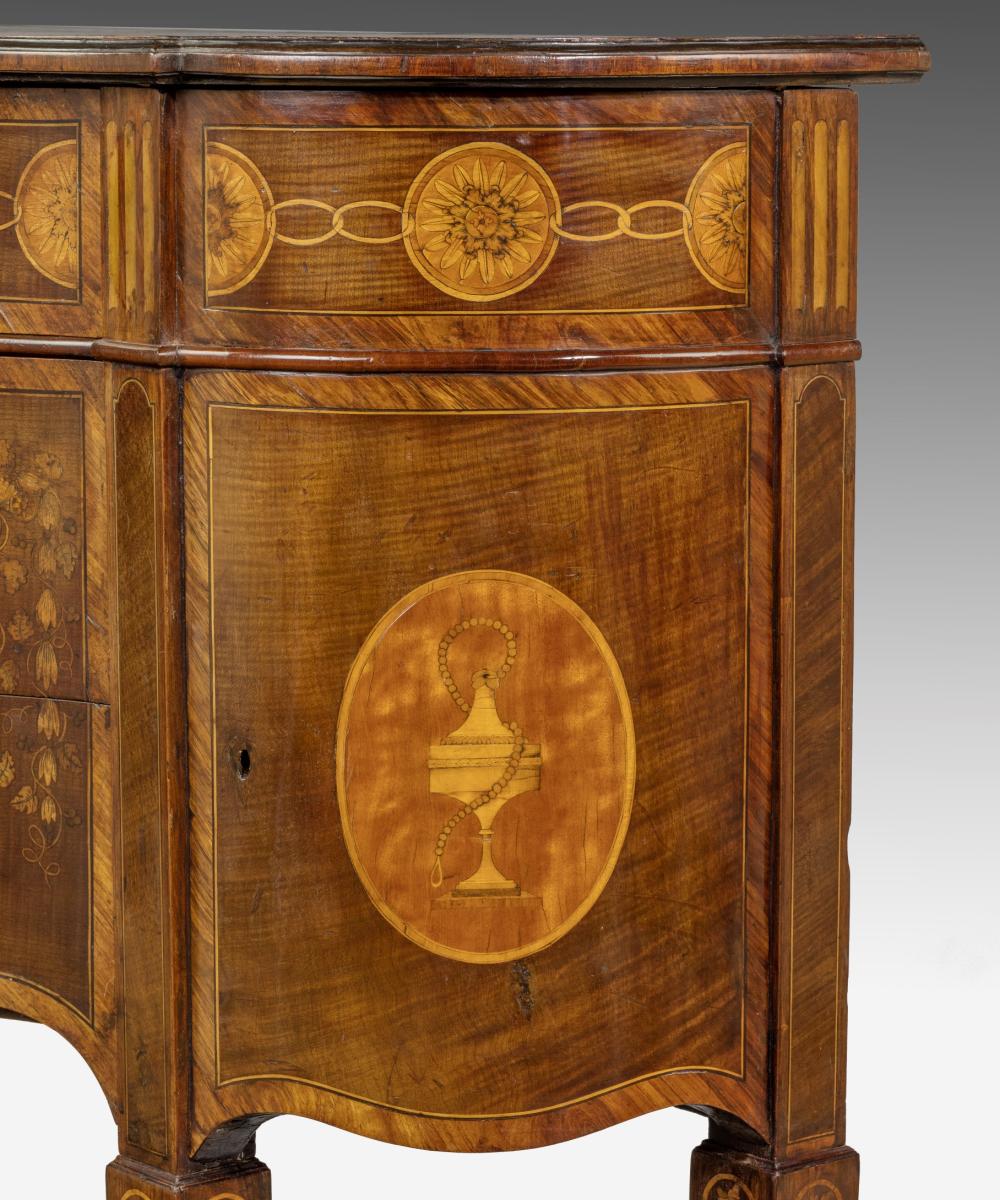 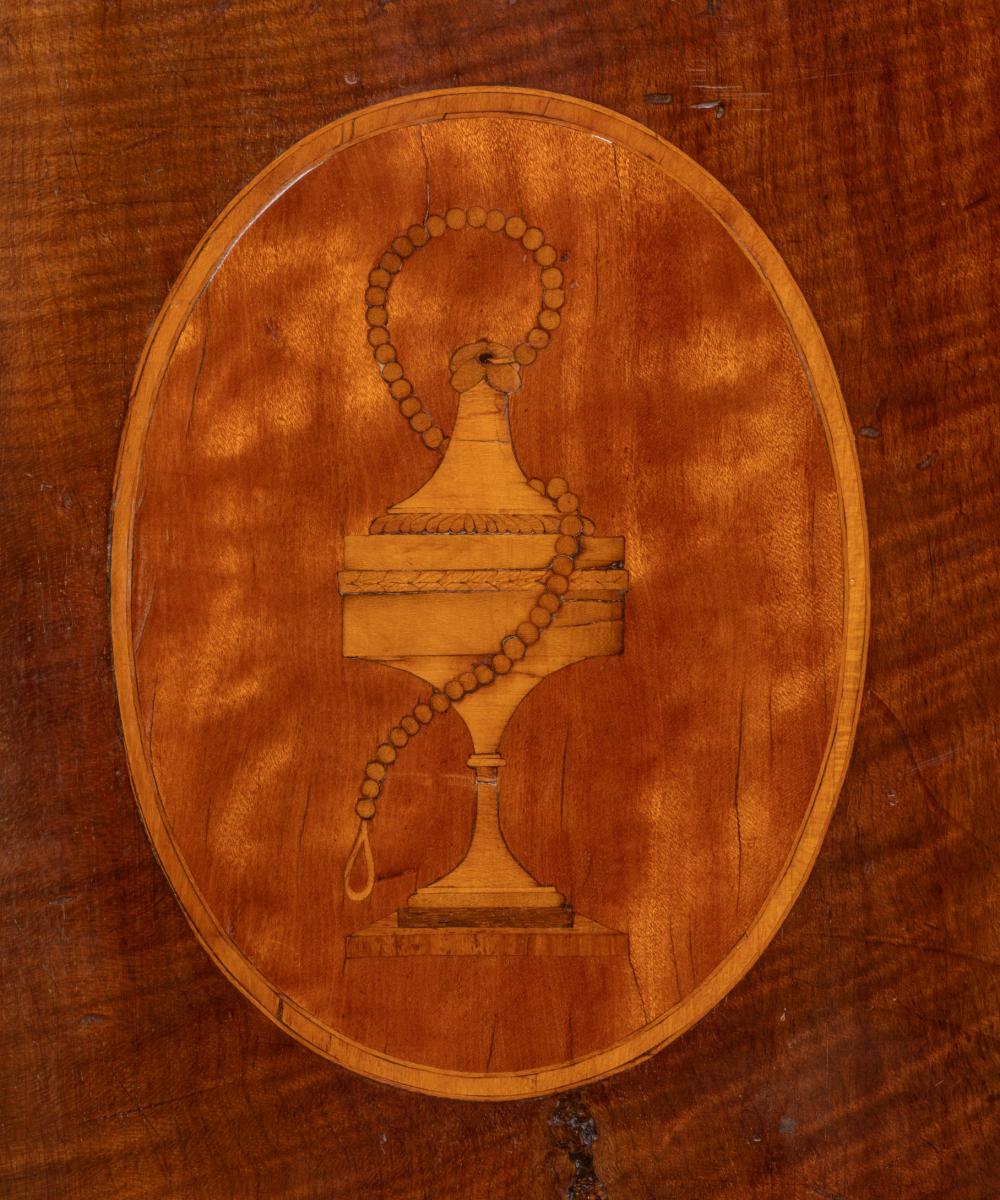 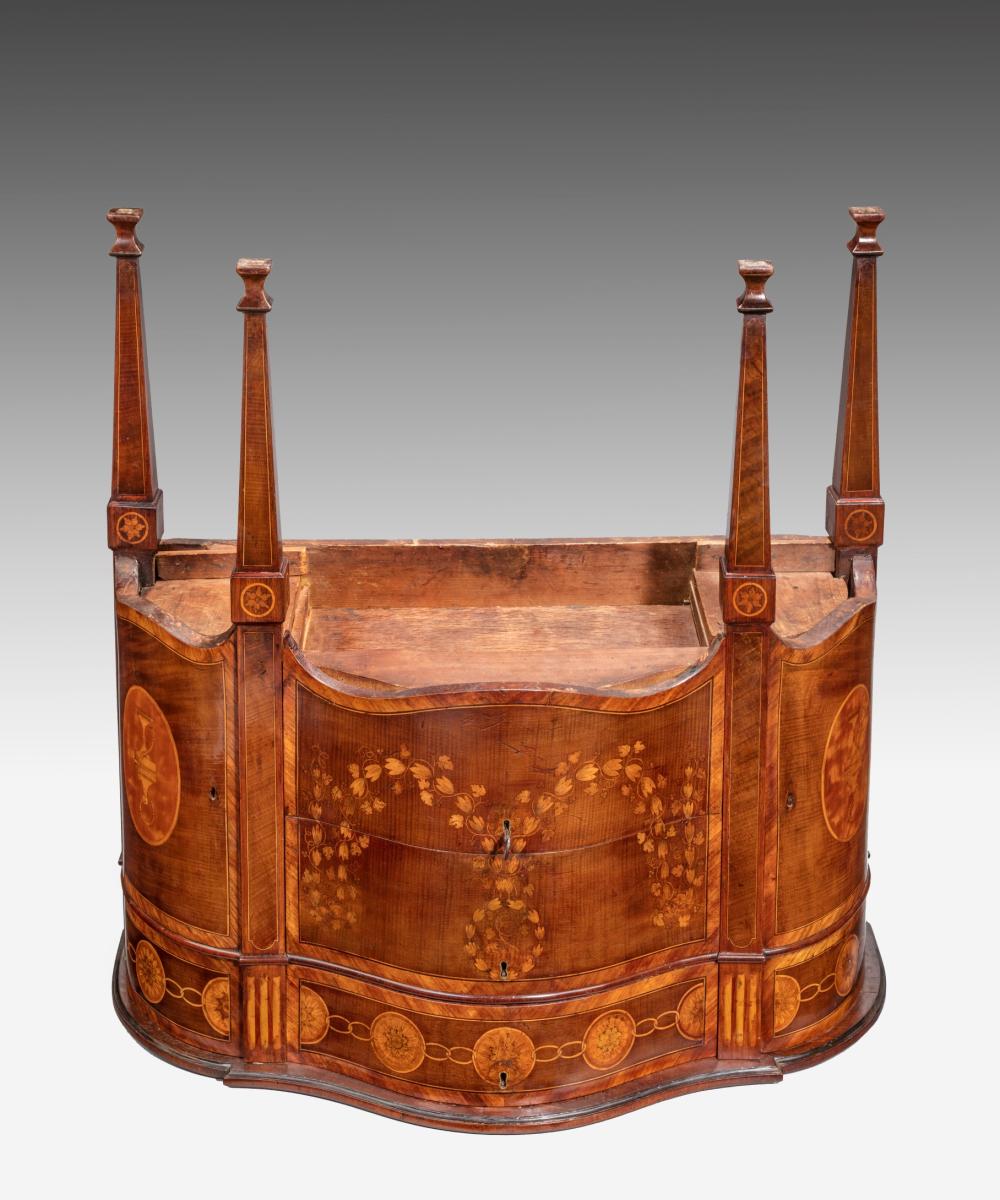 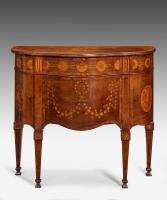 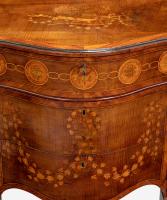 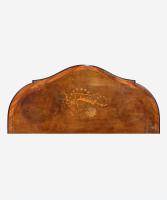 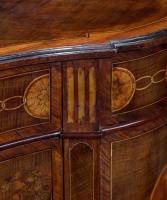 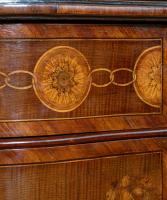 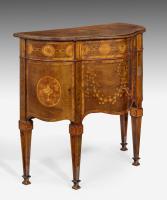 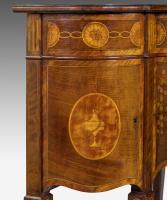 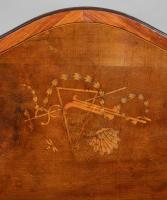 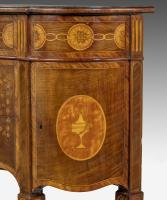 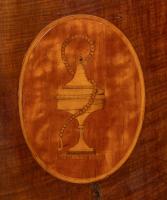 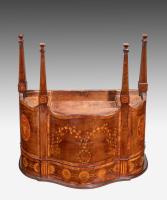 An important George III sycamore and marquetry serpentine pier commode attributed to Mayhew and Ince; the top crossbanded in tulipwood and inlaid with a caduceus, a scallop shell, a triangle with rings, another instrument and a dragonfly above a frieze drawer inlaid with chained Palmyra sunflowers with two further graduated drawers below inlaid sans-traverse with trailing vine leaves and husks flanked by blind doors which are inlaid with oval medallions which depict a bead draped Neo-classical urn on a satinwood background; raised on square tapering legs terminating in shaped block feet.

This commode belongs to an important group of Georgian marquetry furniture attributed to Mayhew and Ince. The commode's unusual inlaid detail of chained Palmyra sunflowers is identical to the frieze on a pair of tables formerly at Mersham-le-Hatch, Kent and the other pieces in this group all have variations on this detail.

The veneer panels set into the legs with concave ends to the top and bottom are found on a number of pieces accredited to Mayhew and Ince including a bureau cabinet illustrated in Wood, Commodes, p. 230, fig. 216.

The use of ebonised mouldings is also typical of Mayhew and Ince's work but not unique to the firm.

The other pieces in this group of furniture attributed to Mayhew and Ince are:

A semicircular pier table formerly in the collection of Dick Turpin ('The Legend of Dick Turpin', Christie's London, 9 March 2006, Lot 229)

A dressing table thought to have been supplied to the 1st Marquess of Bute for Cardiff Castle (Works of Art from the Bute Collection, Vol. I, Christie's London, 3 July 1996, Lot 20)

A rectangular commode at Syon Park

A pair of low cabinets at Broadlands, Hampshire

A pair of commodes from the Henry Hirsch collection 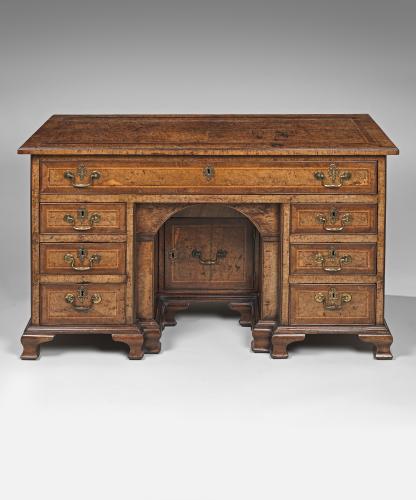 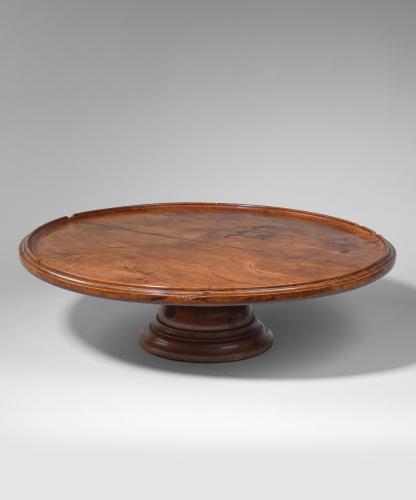 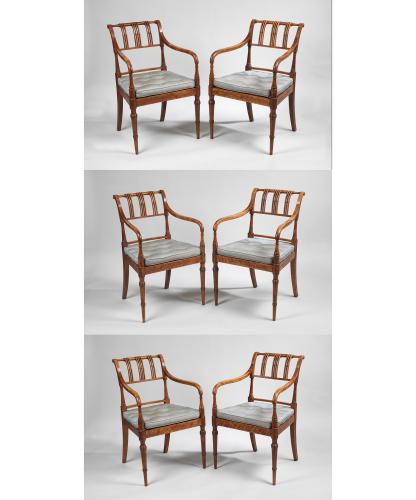