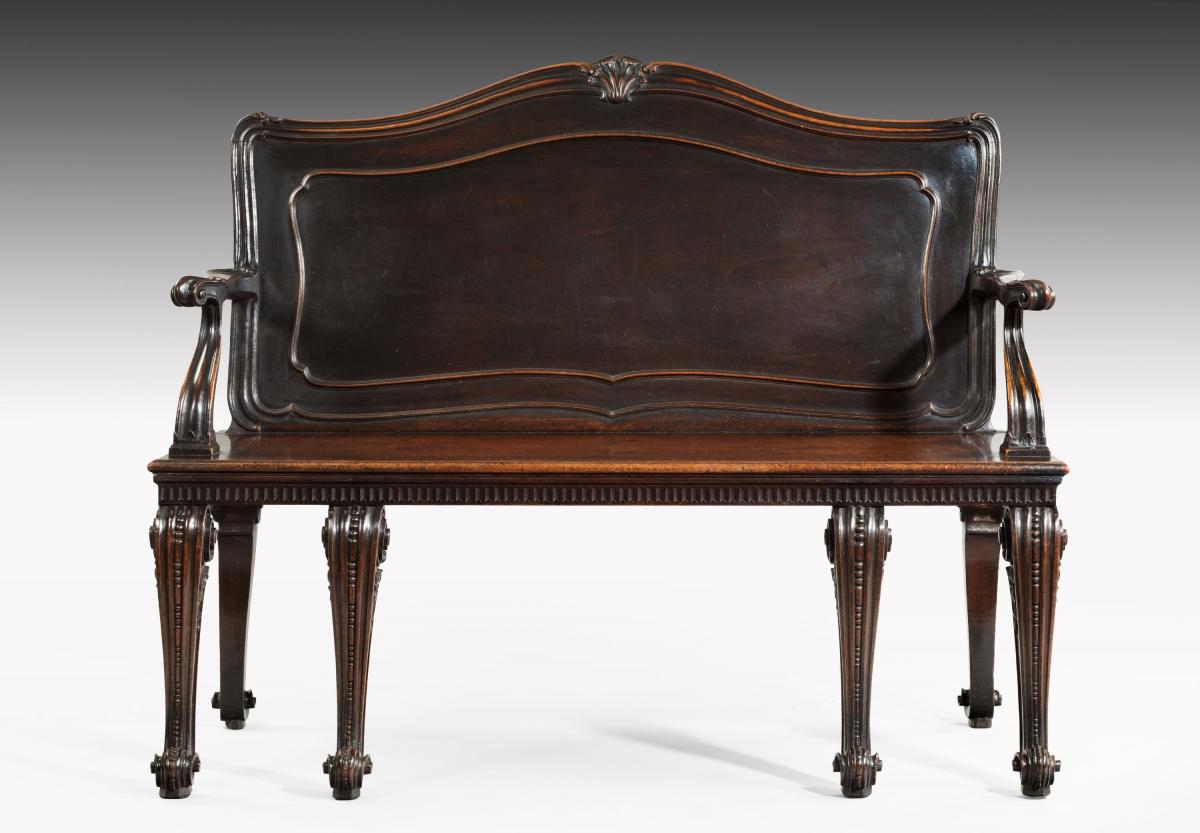 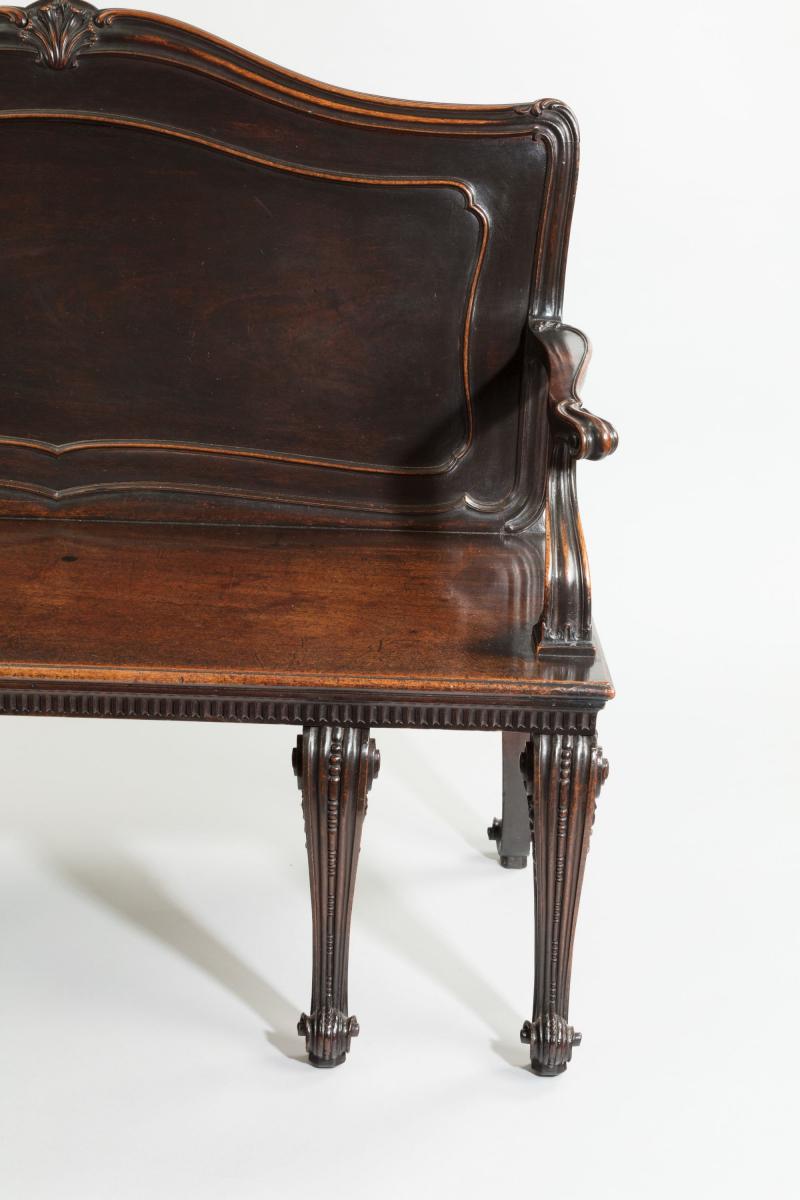 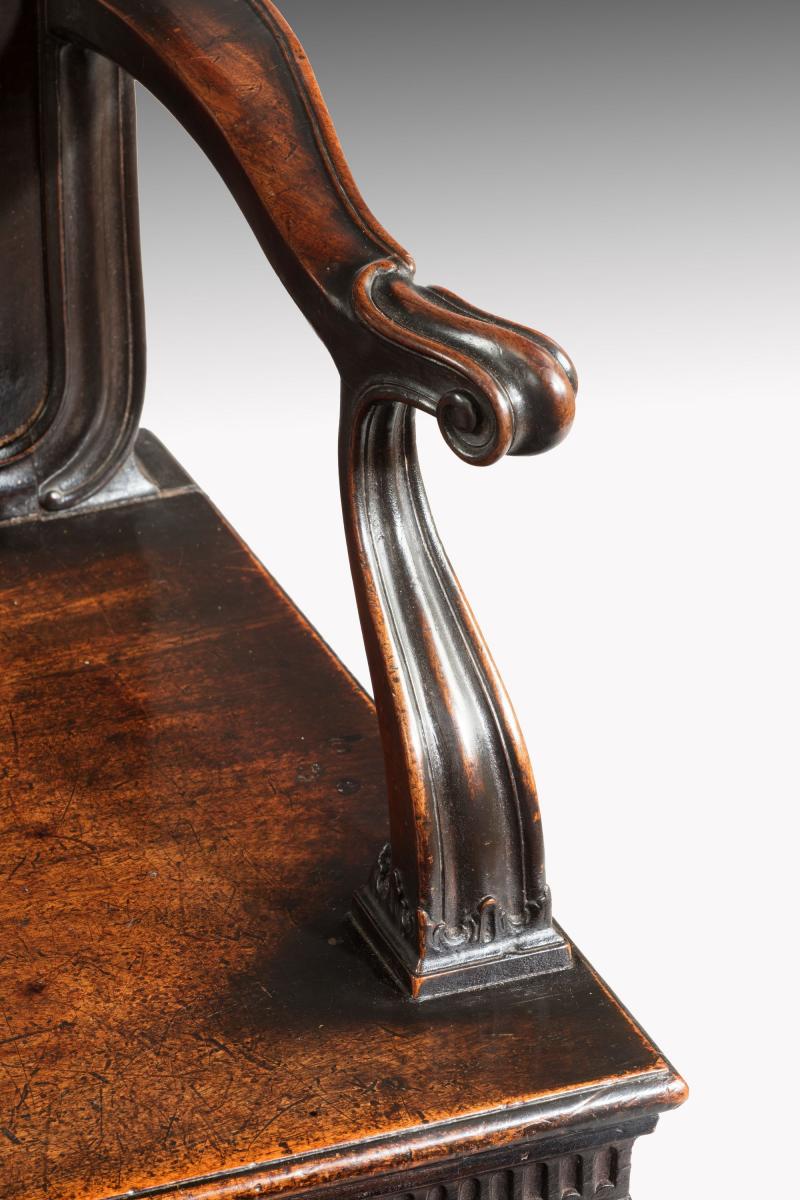 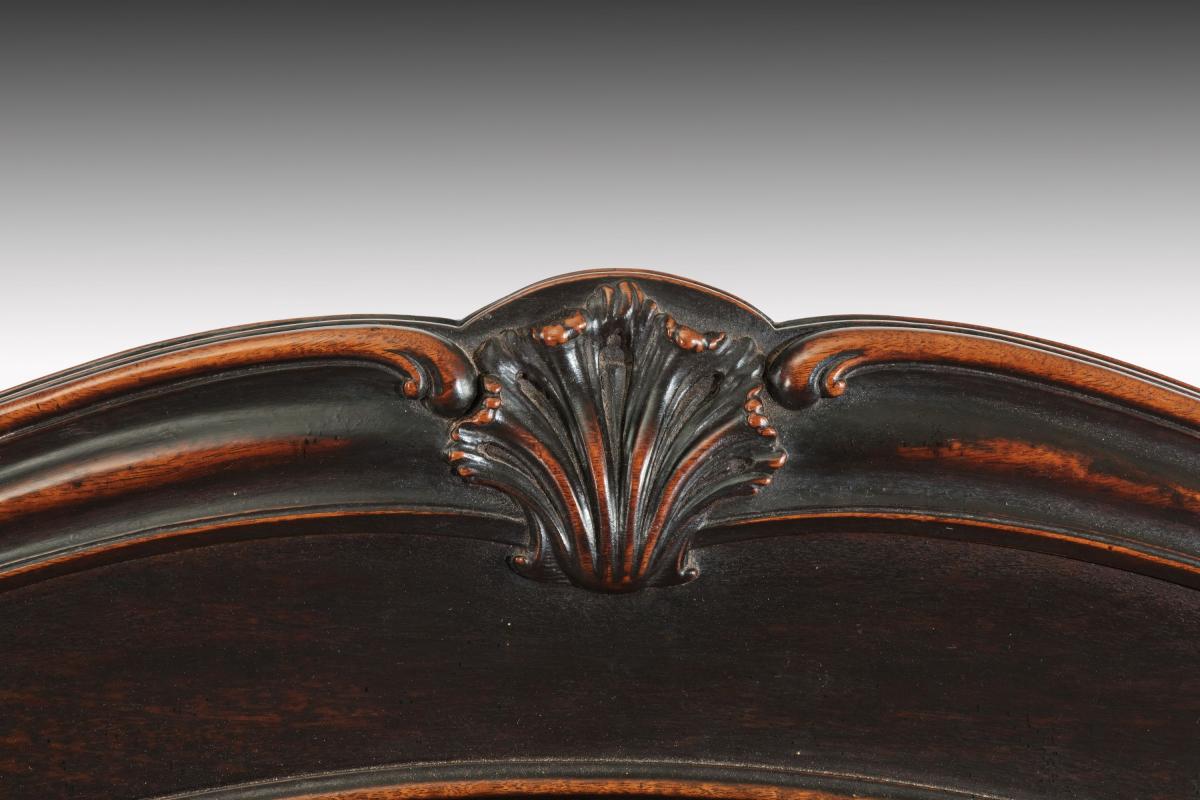 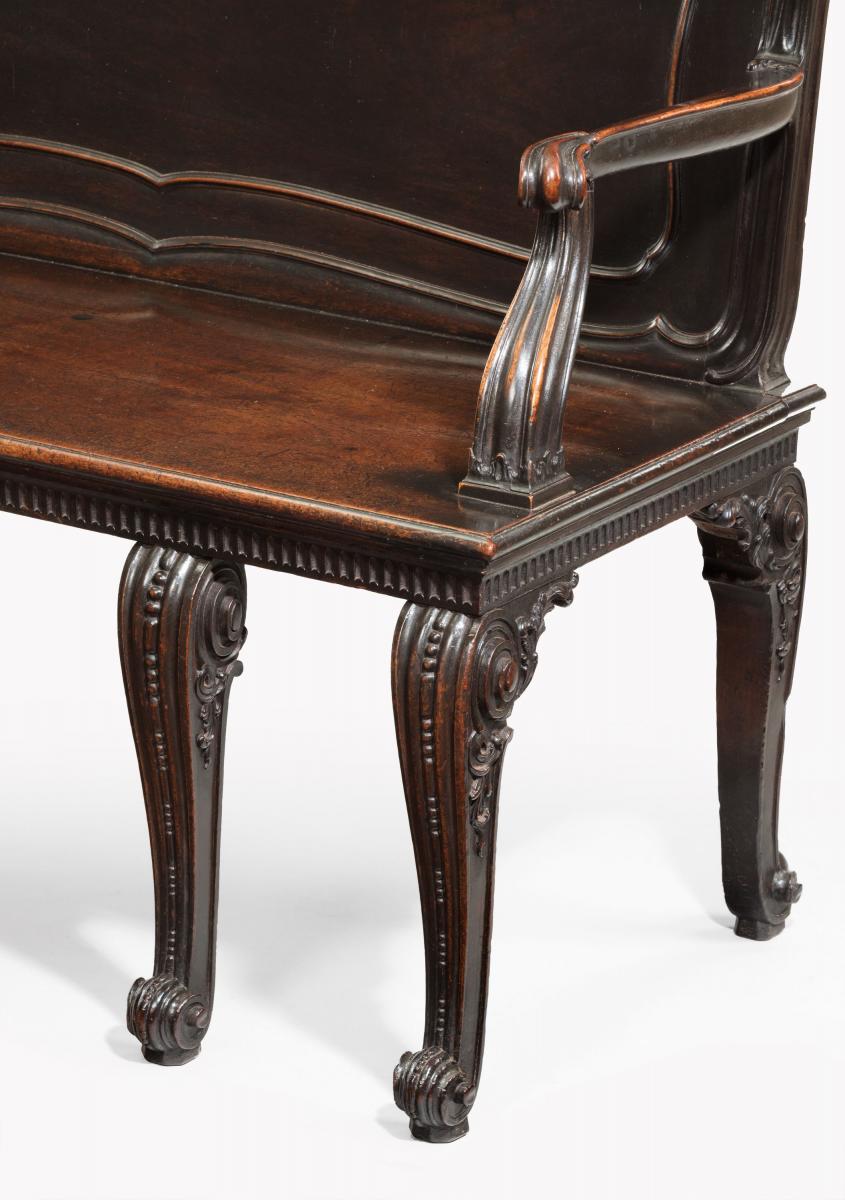 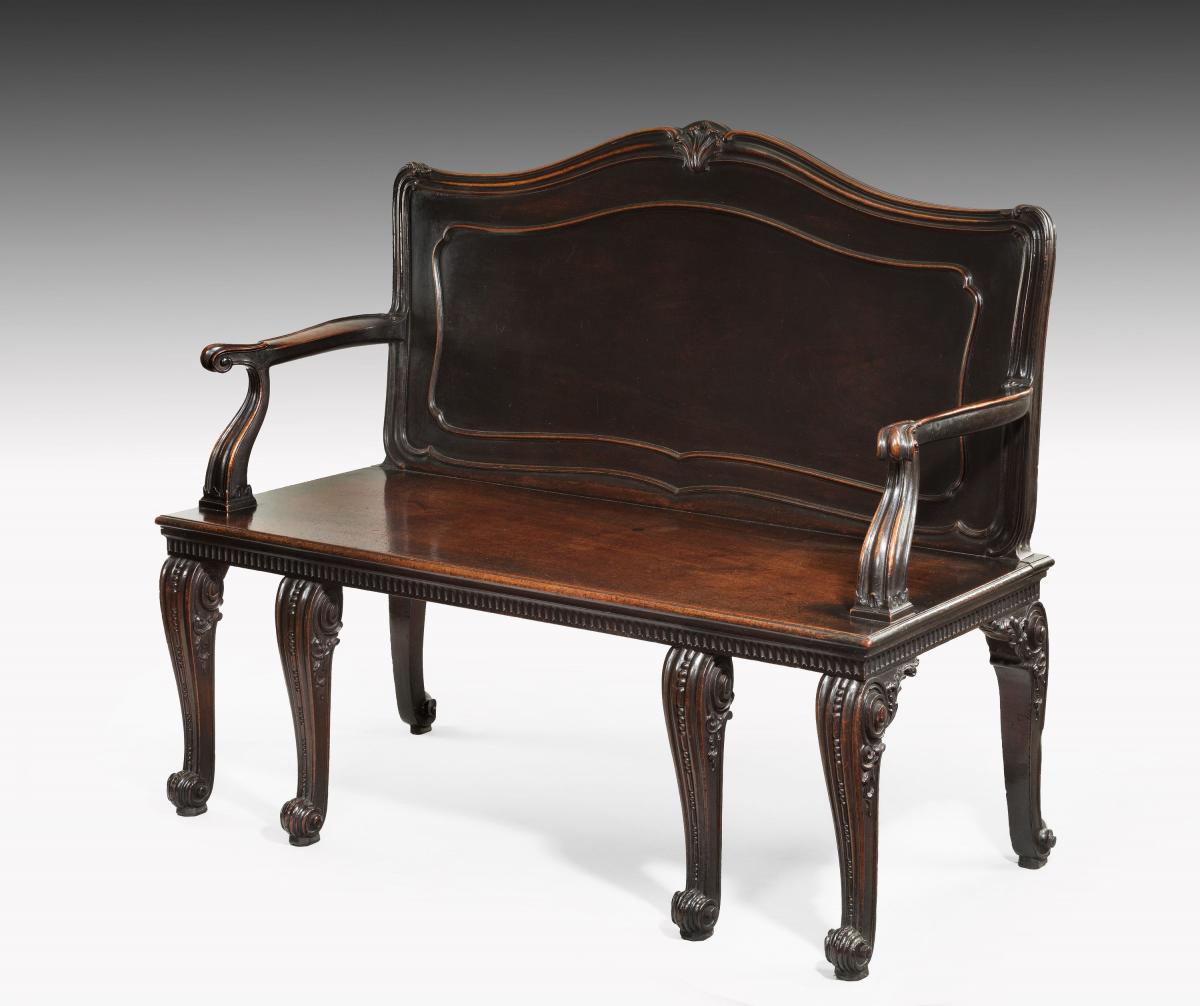 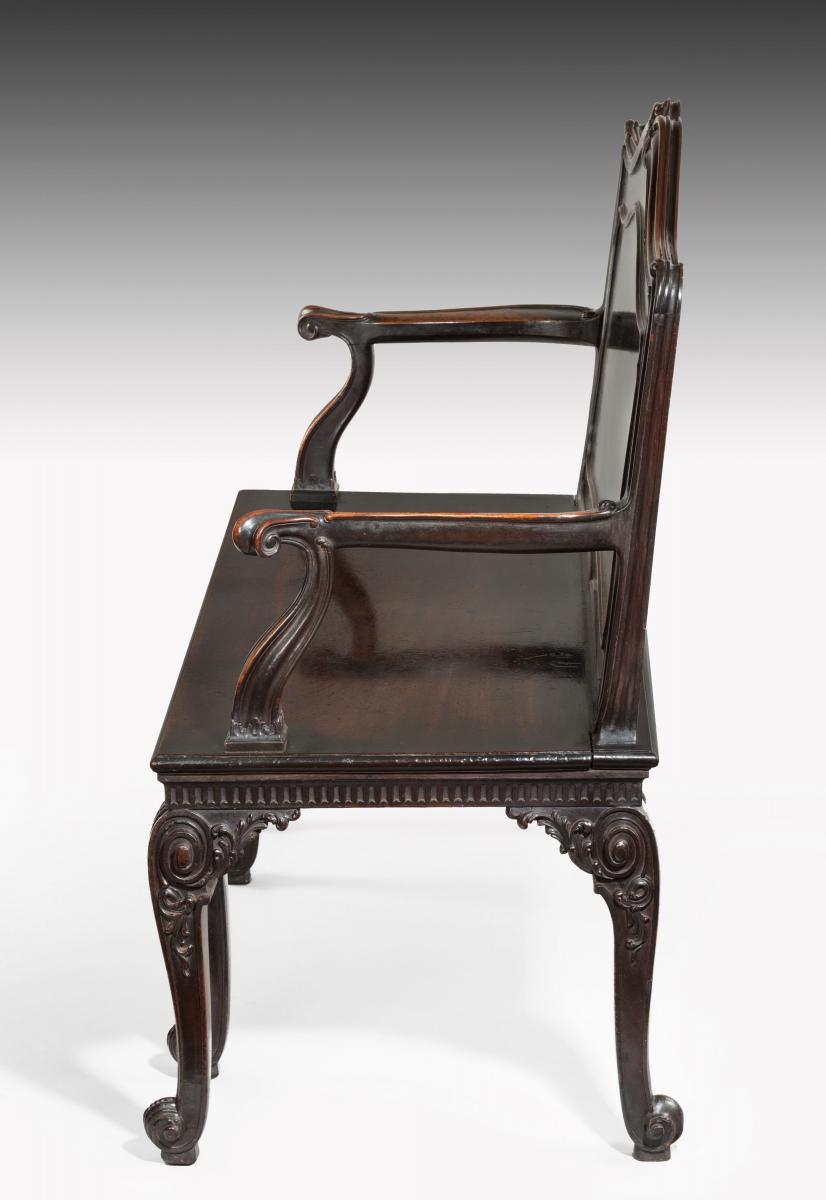 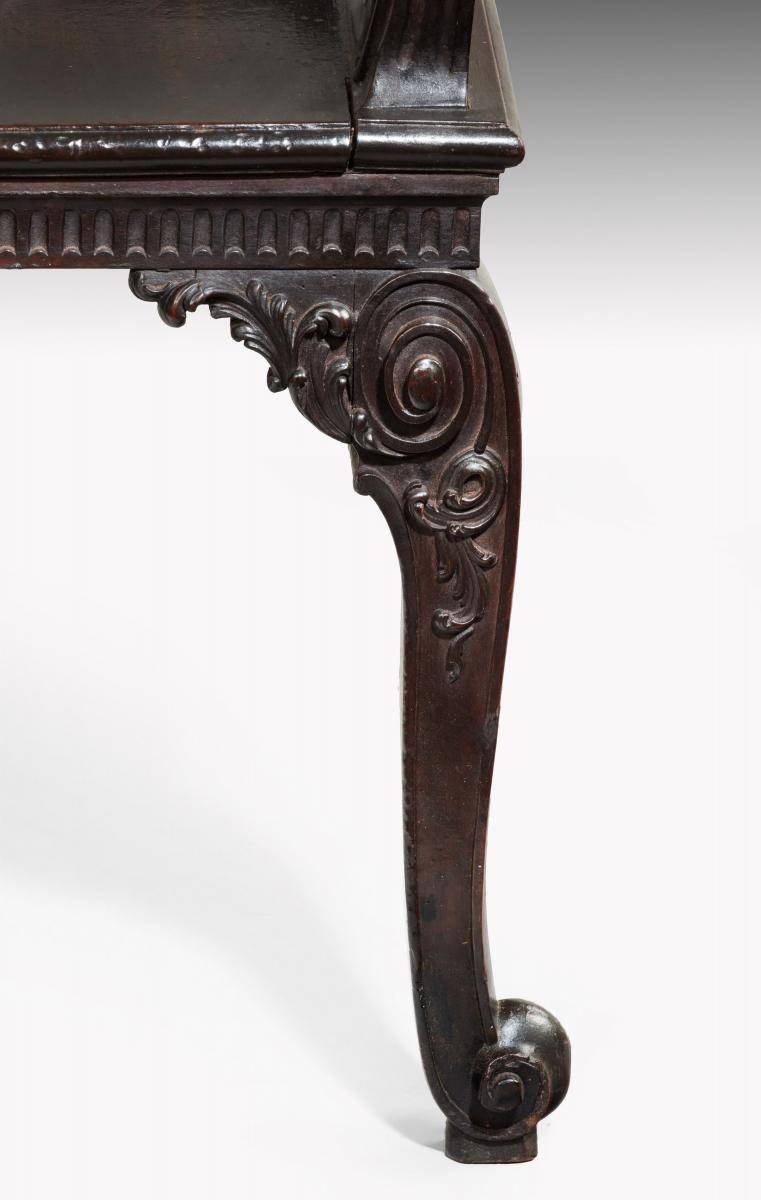 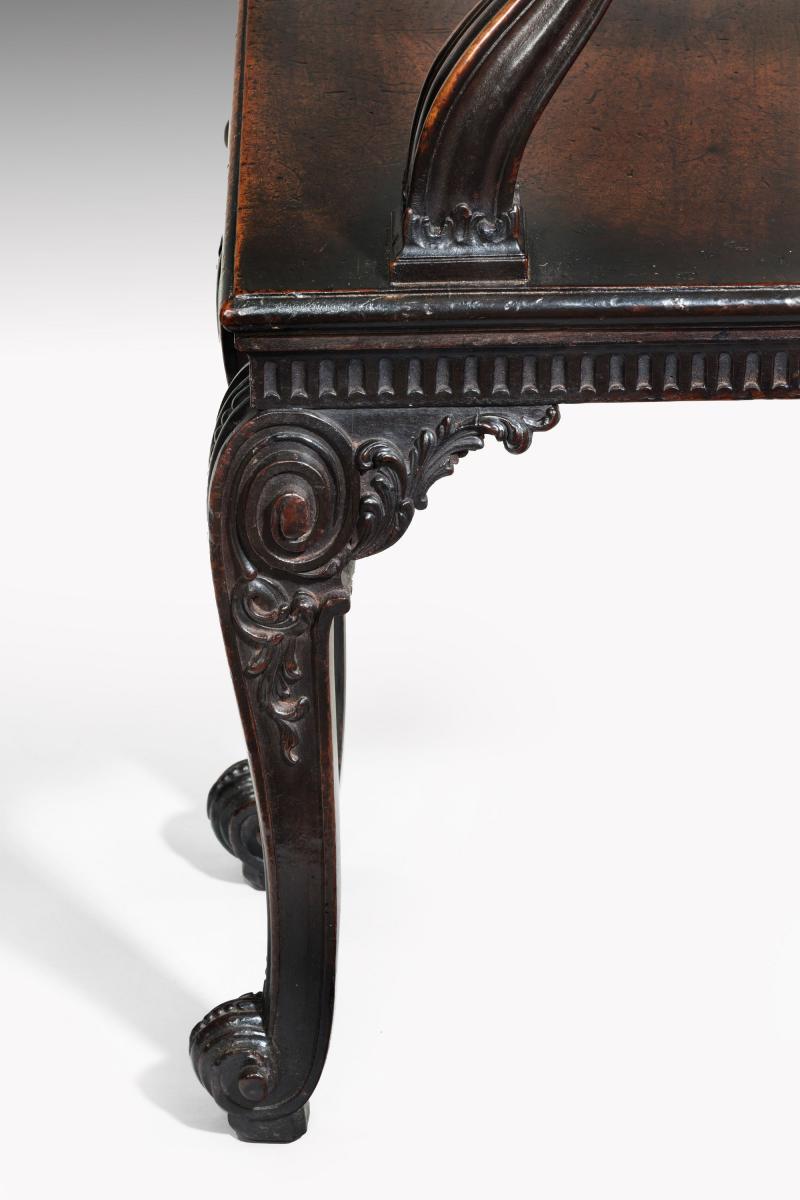 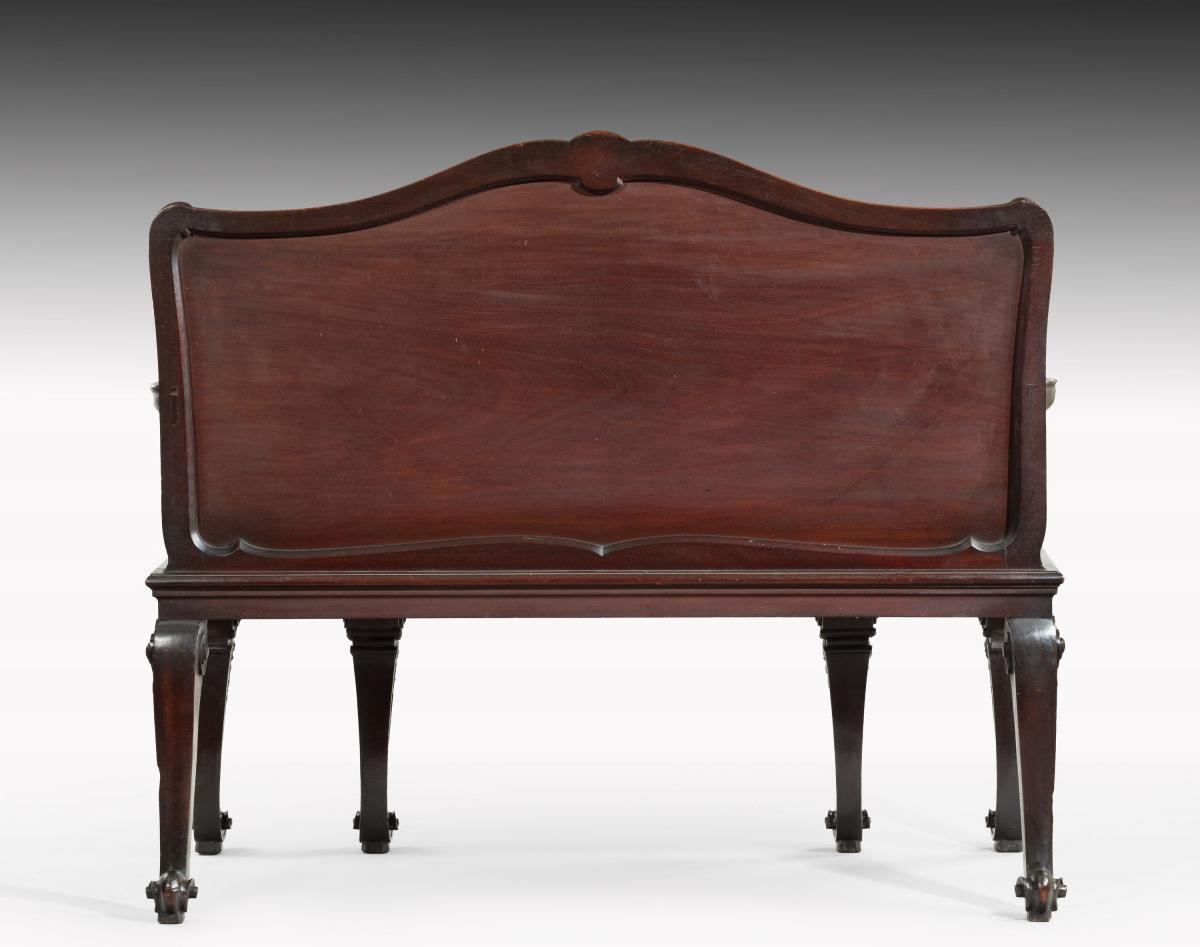 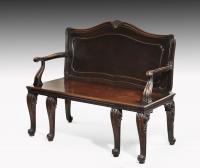 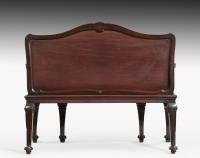 With a shaped foliate carved moulded and panelled back, surmounted by a central stylised shell cresting. The arm supports with scroll carving, and scrolled channelled terminals with foliate collars. Set upon a fluted seat frame, supported by six scrolled corbel legs with bead-and-reel mouldings. Carved with scrolled acanthus and terminating in scroll feet.

An early George III Mahogany Hall Bench, dated circa 1760 and attributed to William and John Linnell, which sold at Sotheby’s, London, ‘Pelham: The Public and the Private’, 8 March 2016, lot 59 (http://www.sothebys.com/en/auctions/ecatalogue/2016/pelham-public-private-l16322/lot.59.html), has the same characteristic shaped panelled back, fluted seat frame, curving scroll-carved arm supports and twinned front legs. The catalogue entry attributes the form of such magnificent hall benches as having derived from the furniture produced by William Kent for the great entrance halls of the newly built 18th Century Palladian mansions. These benches were designed to reveal the wealth and taste of his patrons through the quality of the workmanship and the materials.

John Linnell produced a design for a hall settee in c.1758-1760, which follows the design for the settees made for Devonshire House (Victoria and Albert Museum, London, E.126-1929). Helena Hayward comments that: ‘this drawing illustrated how closely he [John Linnell] modelled himself on Kent in first developing his neo-classical style’ (Helena Hayward, ‘The Drawings of John Linnell in the Victoria and Albert Museum’ in ‘Furniture History: The Journal of the Furniture History Society’, Volume V, 1969, p.88-9; and fig.26).

A pair of similar hall chairs sold at Christie’s, London in the sale ‘Simon Sainsbury: The Creation of an English Arcadia’, which was held on 18th June 2008, lot 10. The cataloguing for this pair of chairs suggests that it was either originally supplied to either Edwin Lascelles (d. 1791) for Harewood House in Yorkshire or to David Lascelles (d. 1784) for Goldsborough Hall, Yorkshire.

A pair of hall settees, supplied to William Drake at Shardeloes, Buckinghamshire in 1767 by John Linnell, has a related stylised foliate cresting surmounting its toprail. Linnell’s drawing for the design of this Hall Settee is illustrated in Helena Hayward’s ‘The Drawings of John Linnell in the Victoria and Albert Museum’, fig.27 and Helena Hayward and Pat Kirkham, ‘William and John Linnell: Eighteenth Century London Furniture Makers’, fig. 251 (Victoria and Albert Museum, E.128-1929).

Another unpublished drawing by John Linnell in the collection of the Victoria and Albert Museum shows a chair with a single panelled back, rather than the three panelled back which appears in the other drawings by Linnell referenced here (E.126-1929).

Spains Hall: Spains Hall is an Elizabethan country house near Finchingfield in Essex. The hall was named after Hervey de Ispania, the first family to own the house. Margery de Ispania married Nicholas Kempe in the early 15th Century, and the Estate passed to the Kempe family. In 1760, the house was bought by Samuel Ruggles, a clothier from Bocking. The current house dates to circa 1570, with a number of earlier parts. A park of around seven hectares surrounds the house.

In 1760, the records from the sale of Spain’s Hall reveal that, when Samuel Ruggles purchased the estate, it was in a rather dilapidated condition. The Ipswich Journal newspaper archive records a contents sale on 25th February 1761: ‘To be sold by auction on the 10th, 11th and 12th of March at Sir Thomas Dyer's, Bart, of Spains Hall, Finchingfield, Essex. Household goods-feather beds- blankets...’. It is likely that Samuel Ruggles would have needed to have purchase furniture for the hall as he was moving from a modest village house on Bradford Street in Bocking. He may have purchased items from the Spain’s Hall contents sale, or negotiated as part of his purchase of the Hall.

Samuel Ruggles and his eldest son both died in 1764 and his younger son, John, only came of age in 1769. The previous year a fire had destroyed the north-east wing of the Hall, which John then had rebuilt. John bequeathed Spains Hall to his cousin, Thomas Ruggles (1737-1813), on his death in 1776. Thomas moved from Clare in Suffolk to Spains Hall in 1795. He began a series of repairs and alterations, including the building of a new south-east wing by J A Repton and the development of the park. In 1807, Ruggles commissioned Humphry Repton to suggest improvements to the gardens. In 1813, Thomas was succeeded by John Ruggles who took the additional name of Brise in 1827. John died in 1852 and left the estate to Colonel Sir Samuel Ruggles Brise (1825-1899).

Literature:
Helena Hayward, ‘The Drawings of John Linnell in the Victoria and Albert Museum’ in ‘Furniture History: The Journal of the Furniture History Society’, Volume V, 1969.