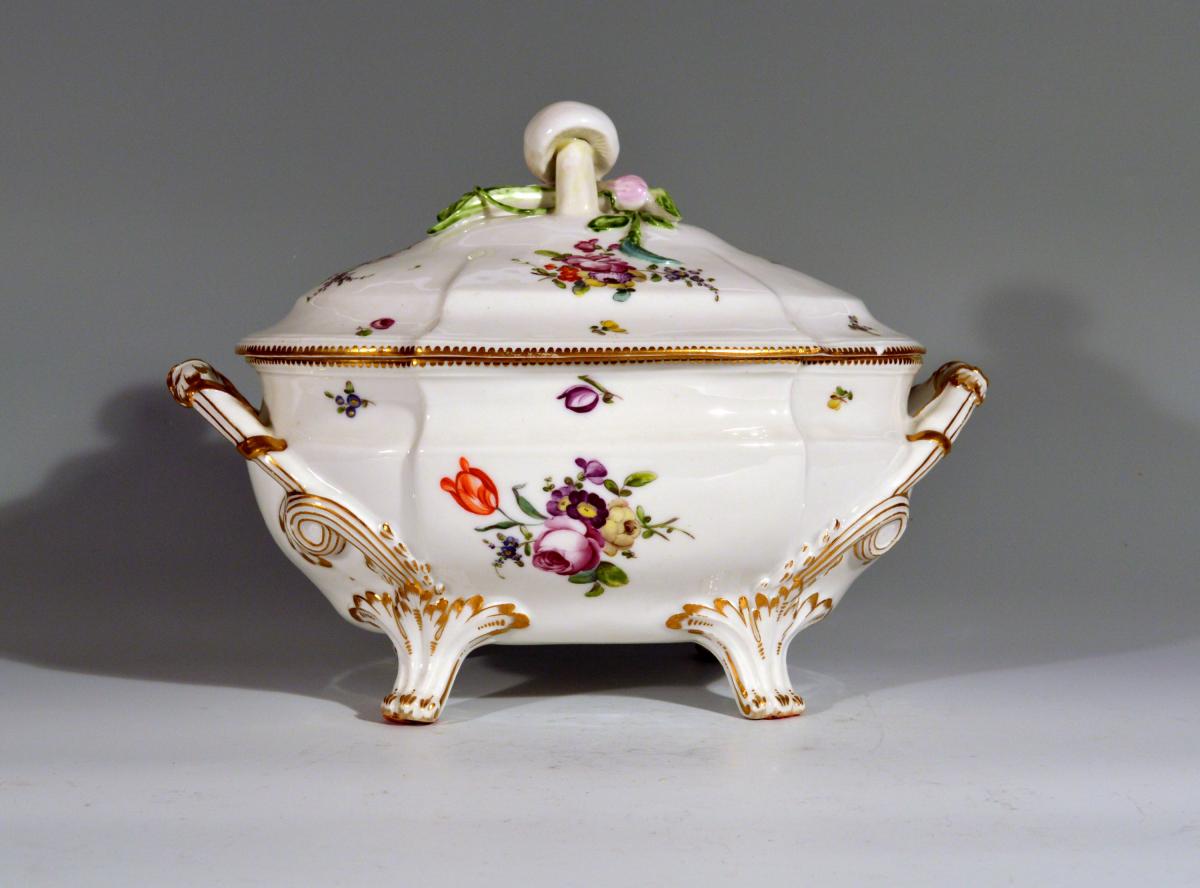 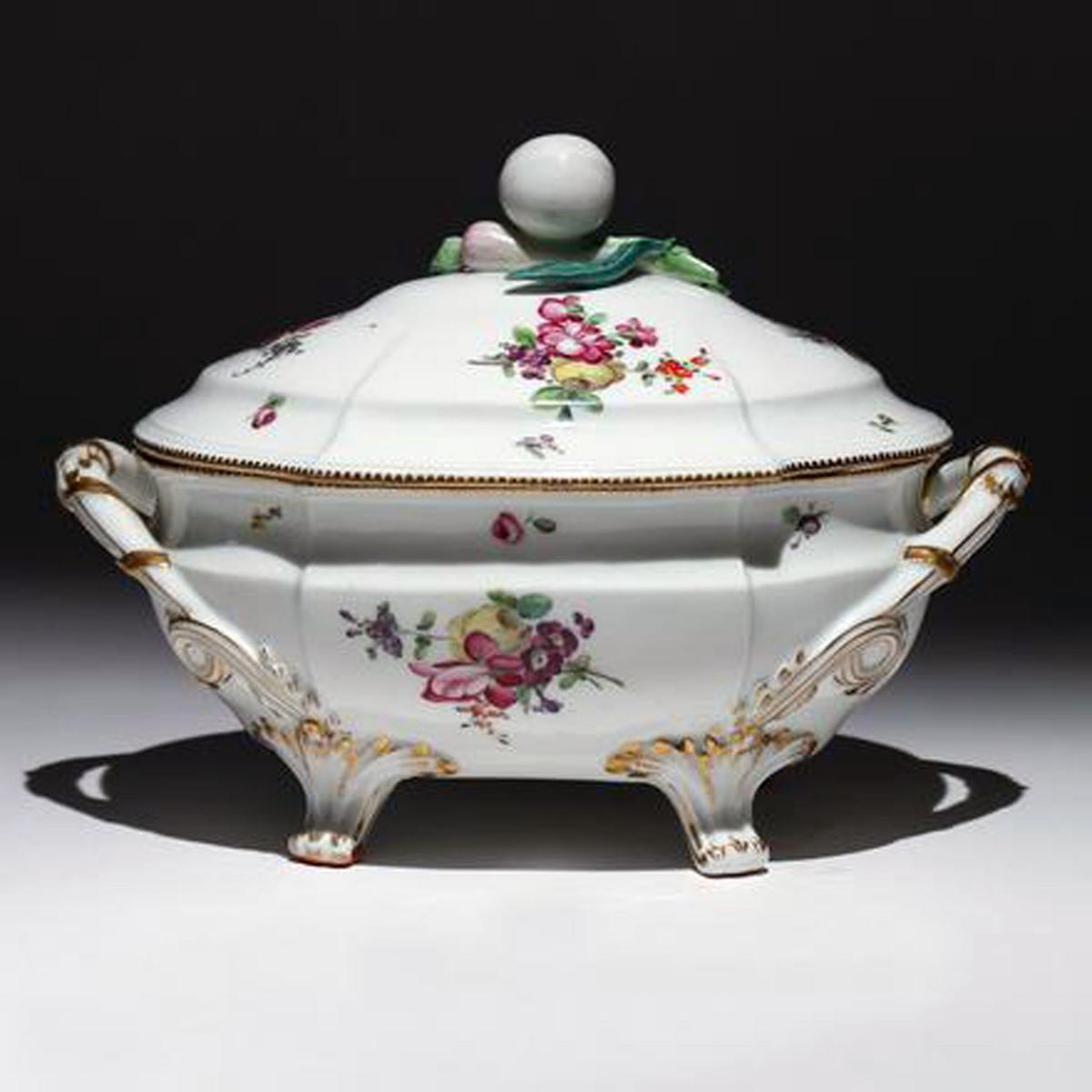 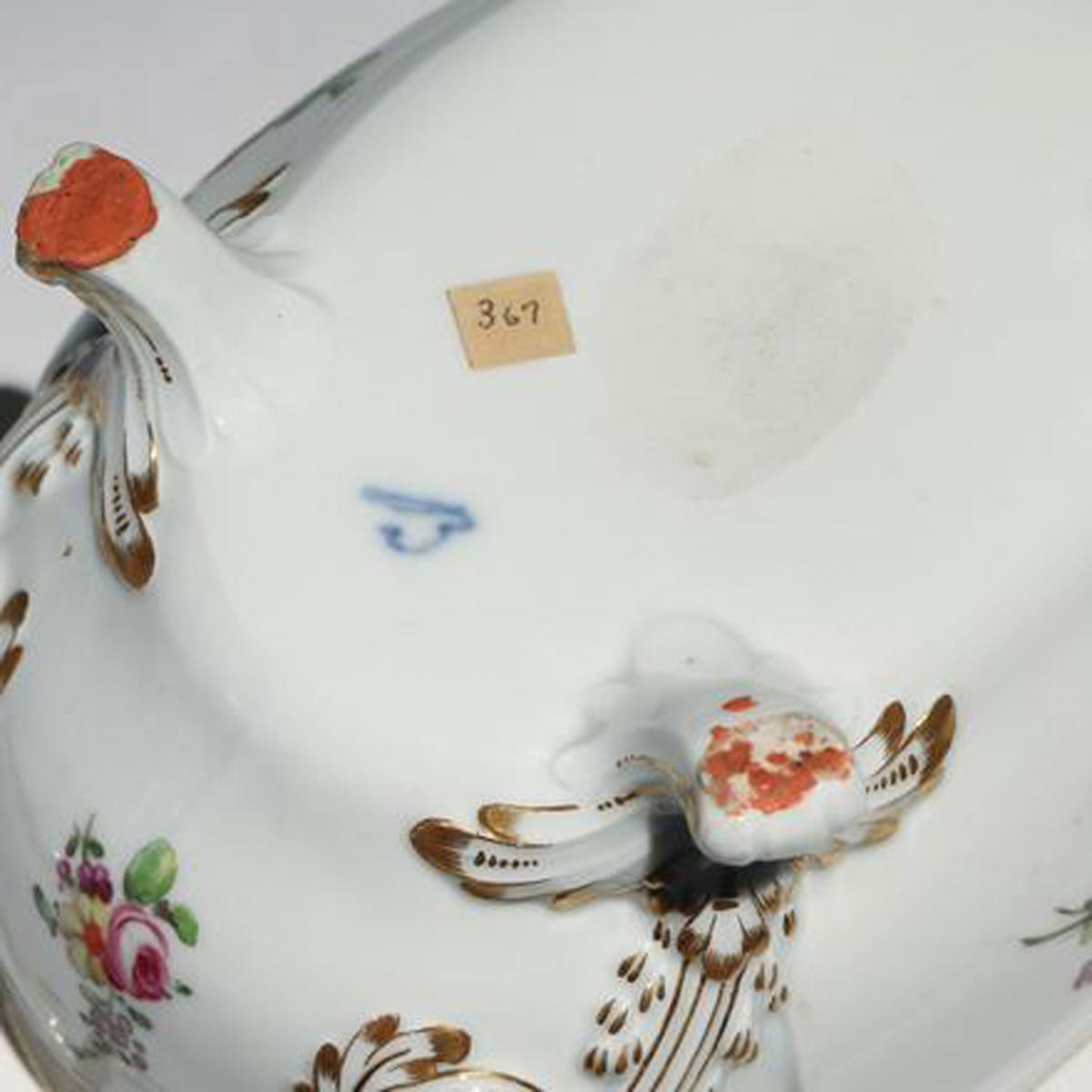 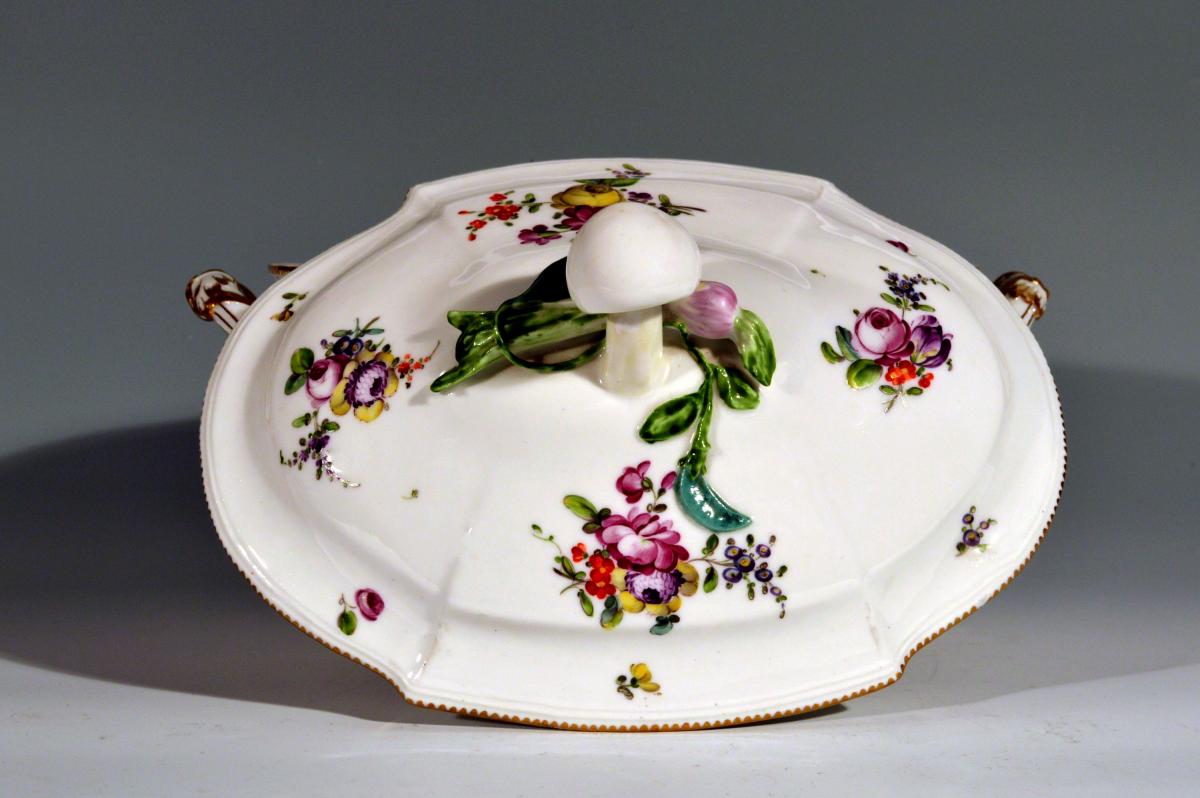 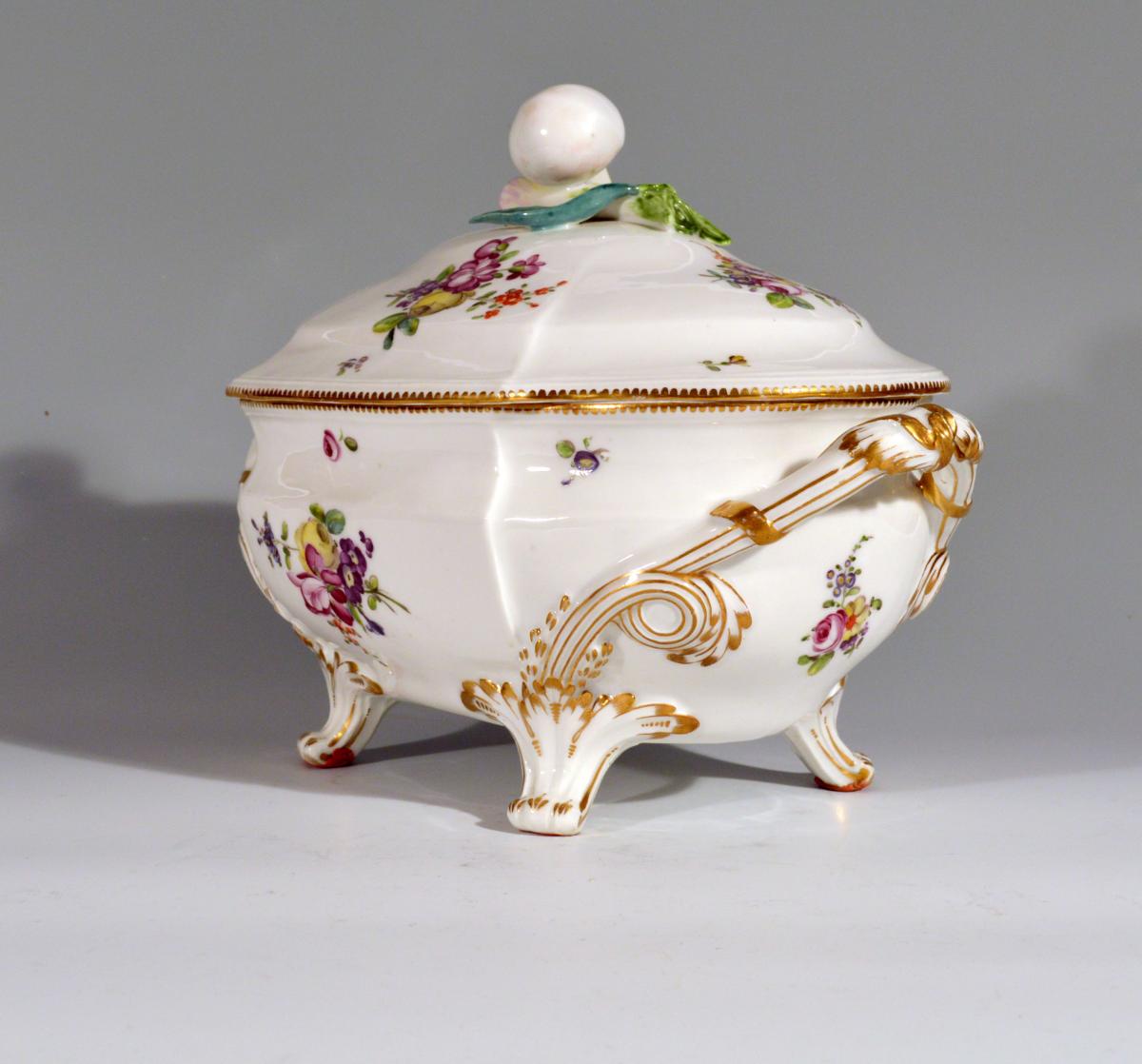 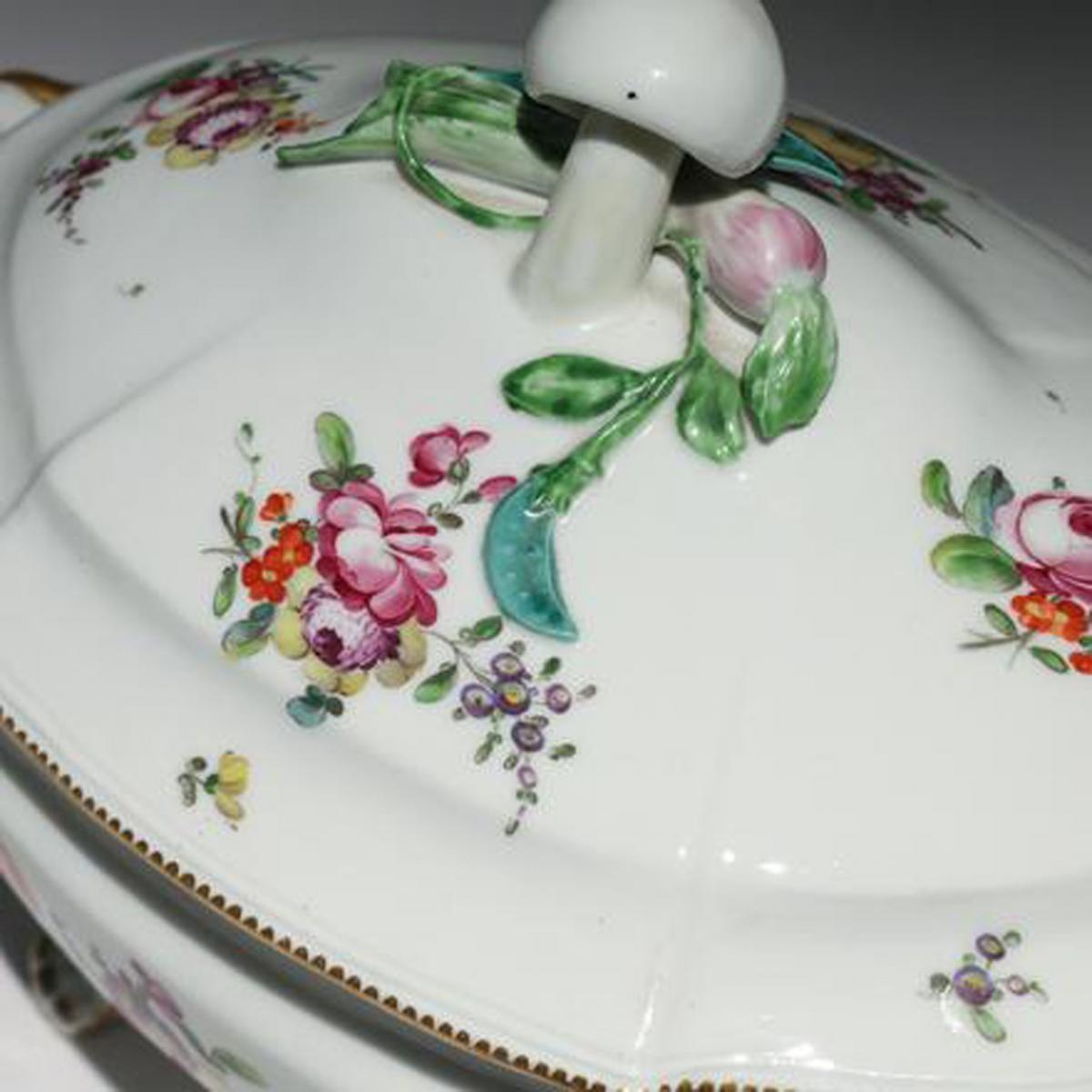 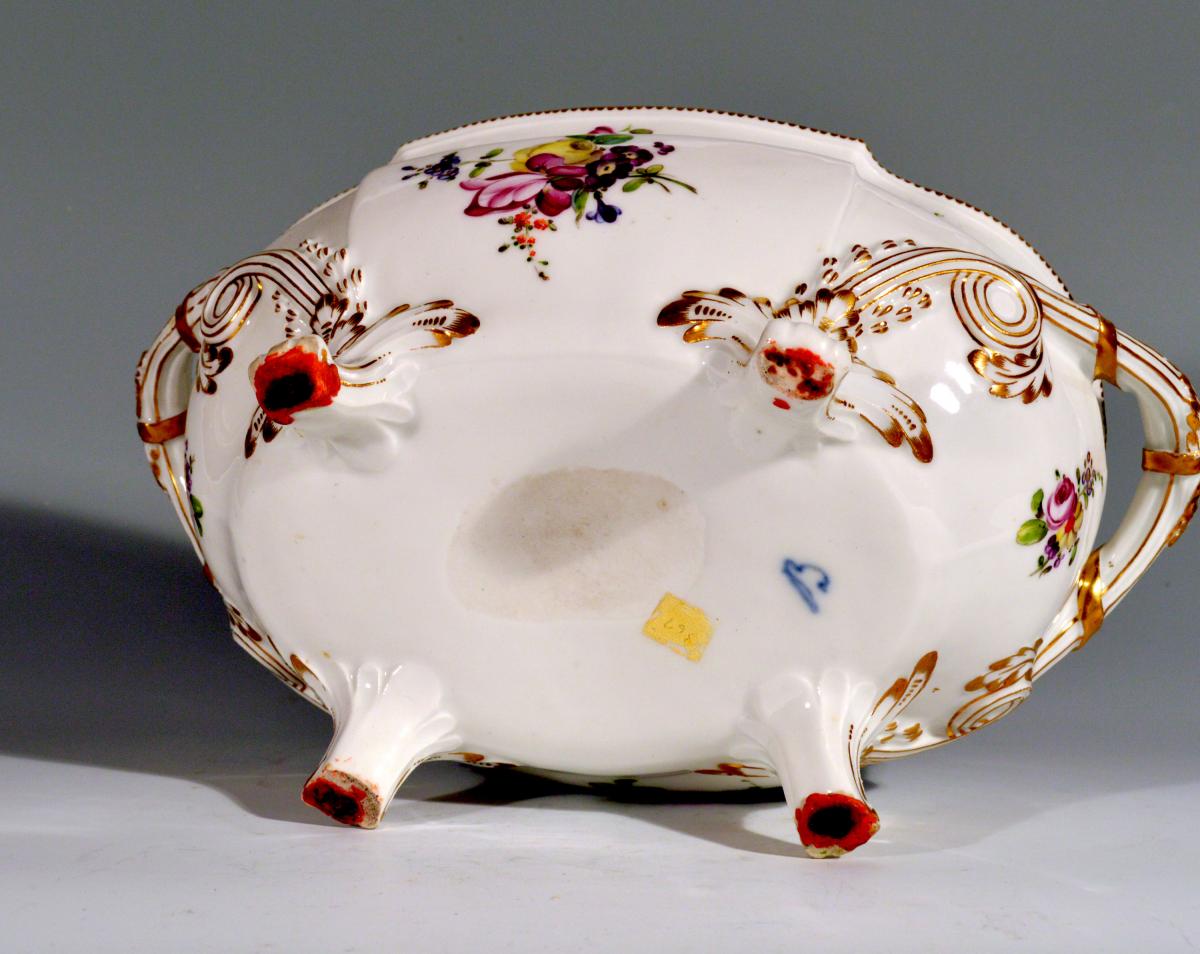 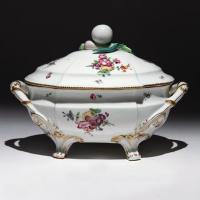 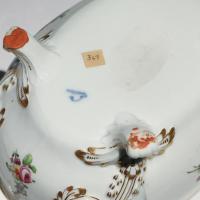 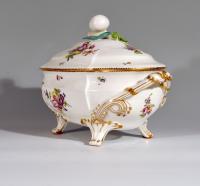 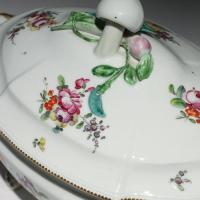 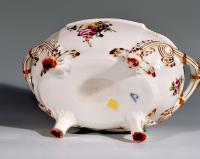 The rare elegant and stylish tureen after the Sèvres rises on four flared feet and is well painted with bouquets of flowers (Bouquet détaché) to each side and with scattered flowers throughout.  The finial is in the form of moulded vegetables in the form of a mushroom and a radish.  The terminals of the feet, handles, and rim are highlighted in gold.

Mark: script B in underglaze blue.

Examples from this rare factory can be found in the V & A, London and The Gardiner Museum, Toronto.

French Porcelain, Aileen Dawson, Page 301, for discussion on the Boisette factory.  The author notes that little is known at present about the hard paste porcelain factory near Melun (Seine-et-Marne), around 32 km (20 miles) from Paris..

"No record of the registration of any factory mark has been discovered and doubts have been expressed as to whether the underglaze blue script B mark cn be attributed to Boissettes.  In the absence of a plausible alternative, however, it is currently considered to be the mark of this concern."

A small ceramics factory was established in the village of Boisette.   Initially the backers and associates were the Joly spouses who began to manufacture white-colored ceramics. Before 1775 a relatively small number of pieces left the factory because of financial problems leading to the withdrawal of partners, debts, the suspension of the activity for more than ten years.

In 1776 the Vermonet father and son acquired the pottery and transformed it to make porcelain which for three years seemed to benefit from the protection of Duke Louis Philippe d'Orléans who has just acquired the château de Sainte-Assise at Seine-Port. It was undoubtedly the lack of profitability and a risky management which were the causes of the cessation of activity on August 23, 1781.

From this short period of production pieces of tableware recognizable by a B in cursive blue, black or purple.

Excellent but one spot of gilt loss to cover rim as seen in photo. 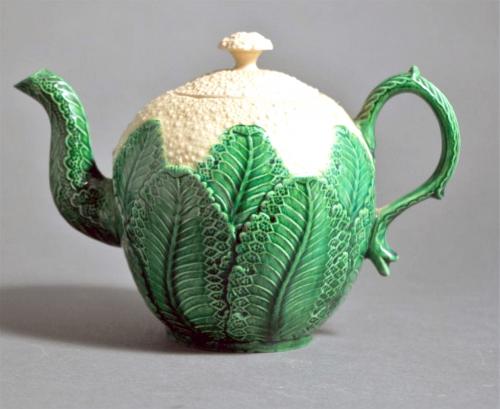 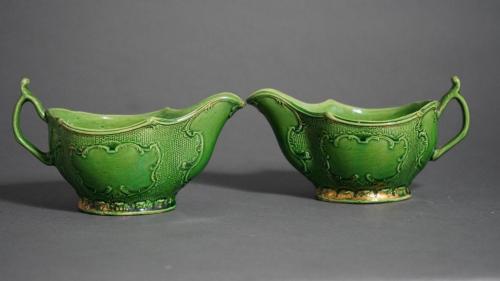 18th Century Whieldon-type Green-glazed Sauceboats with remains of Original Gilt, Circa 1750-70
Earle D Vandekar of Knightsbridge, Inc
View all from this dealer