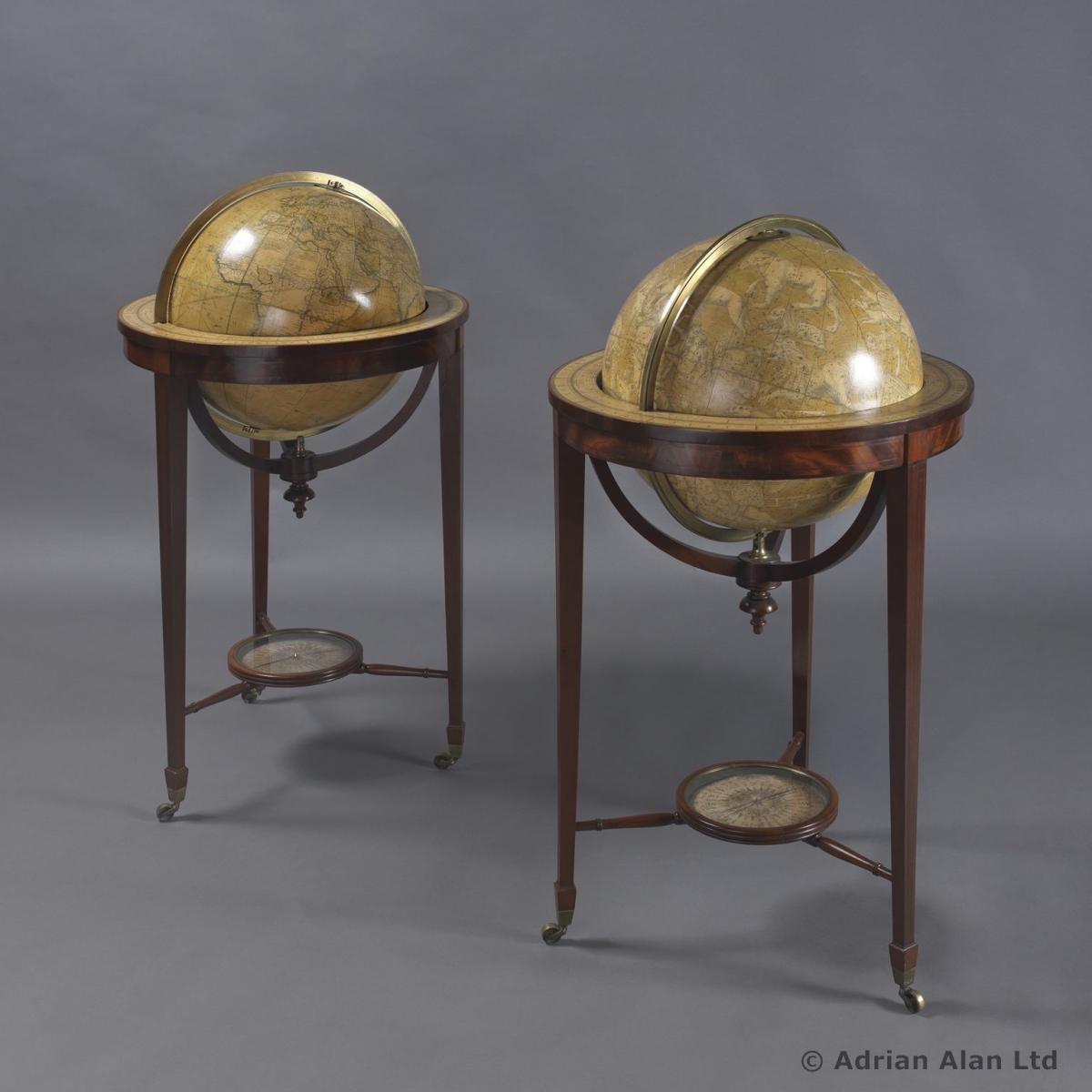 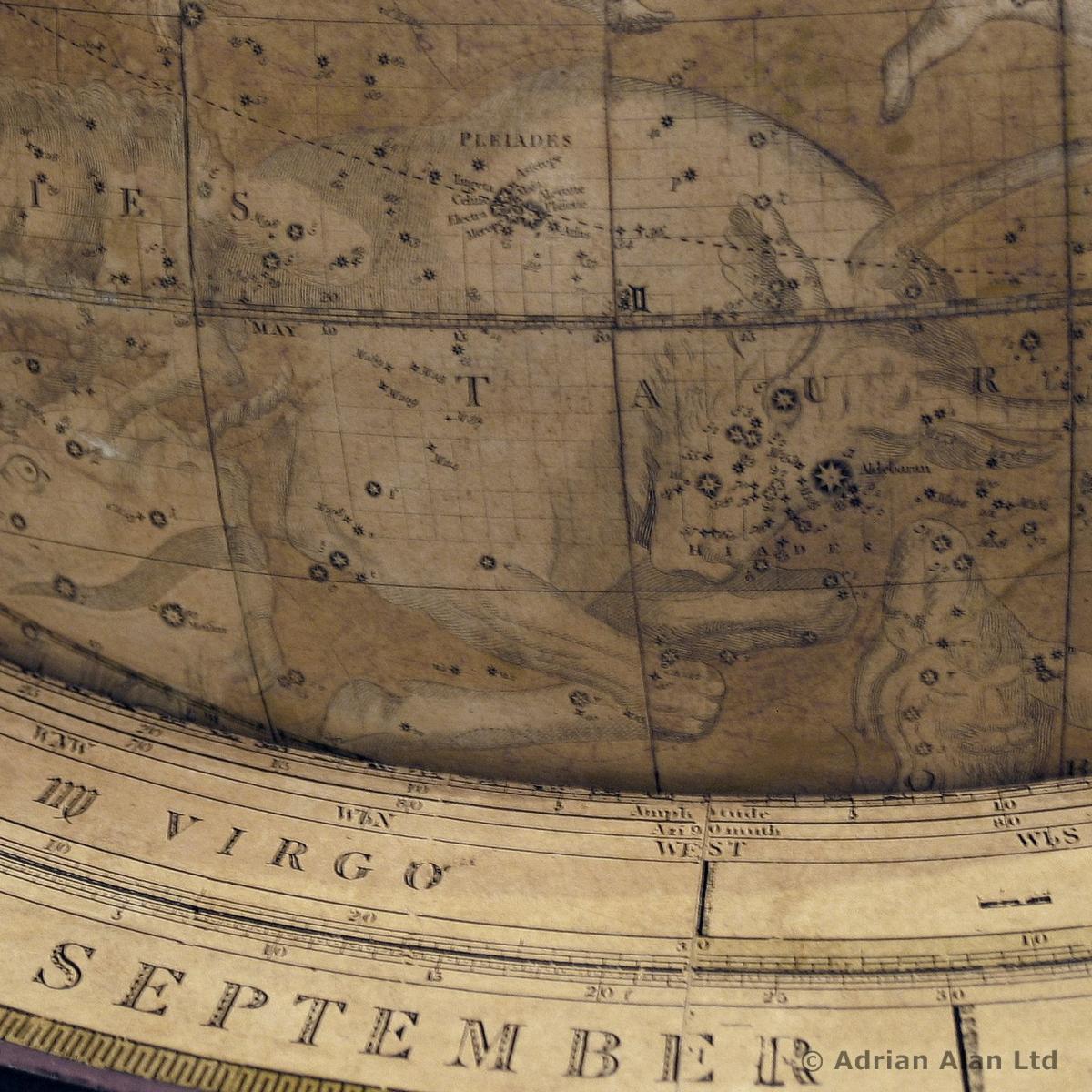 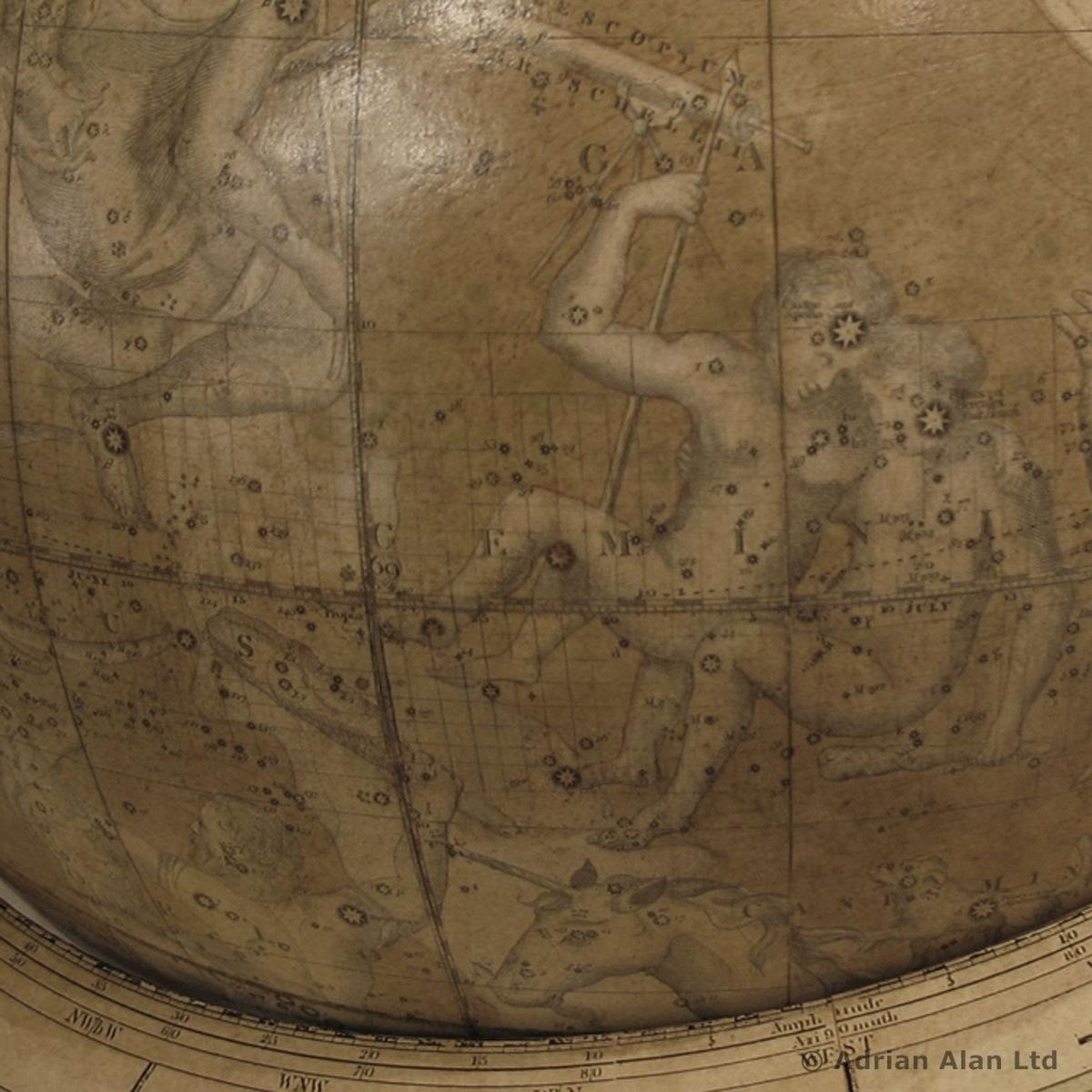 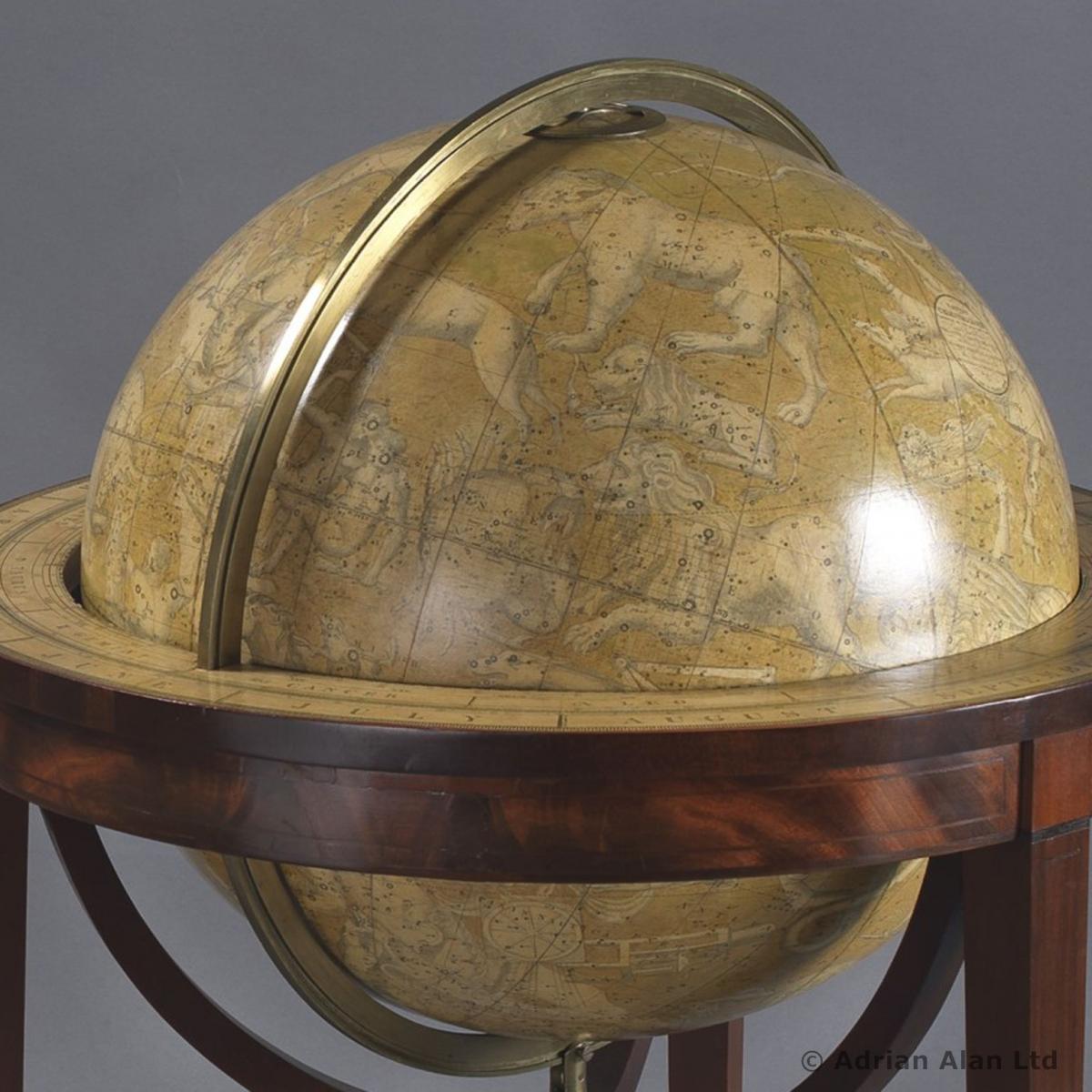 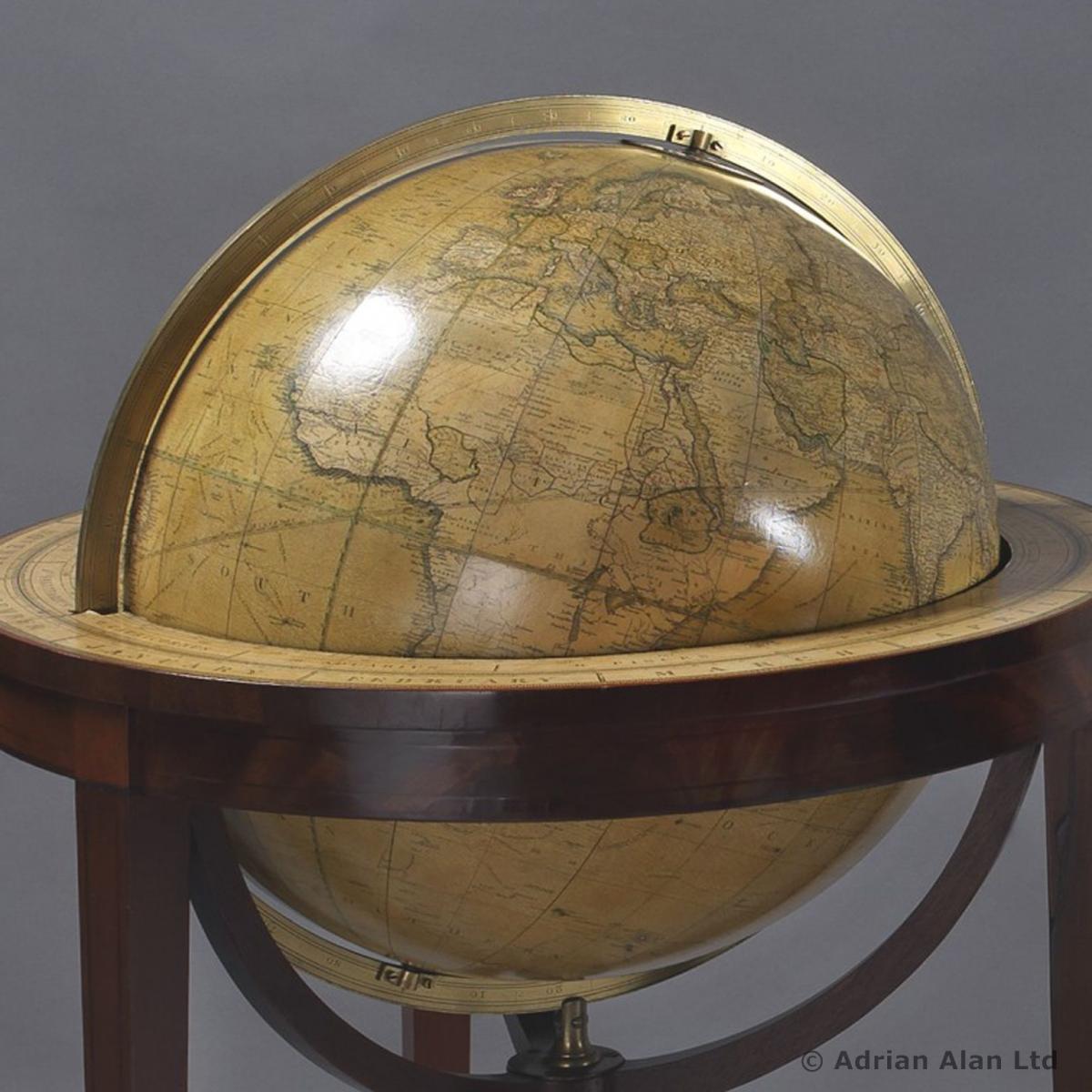 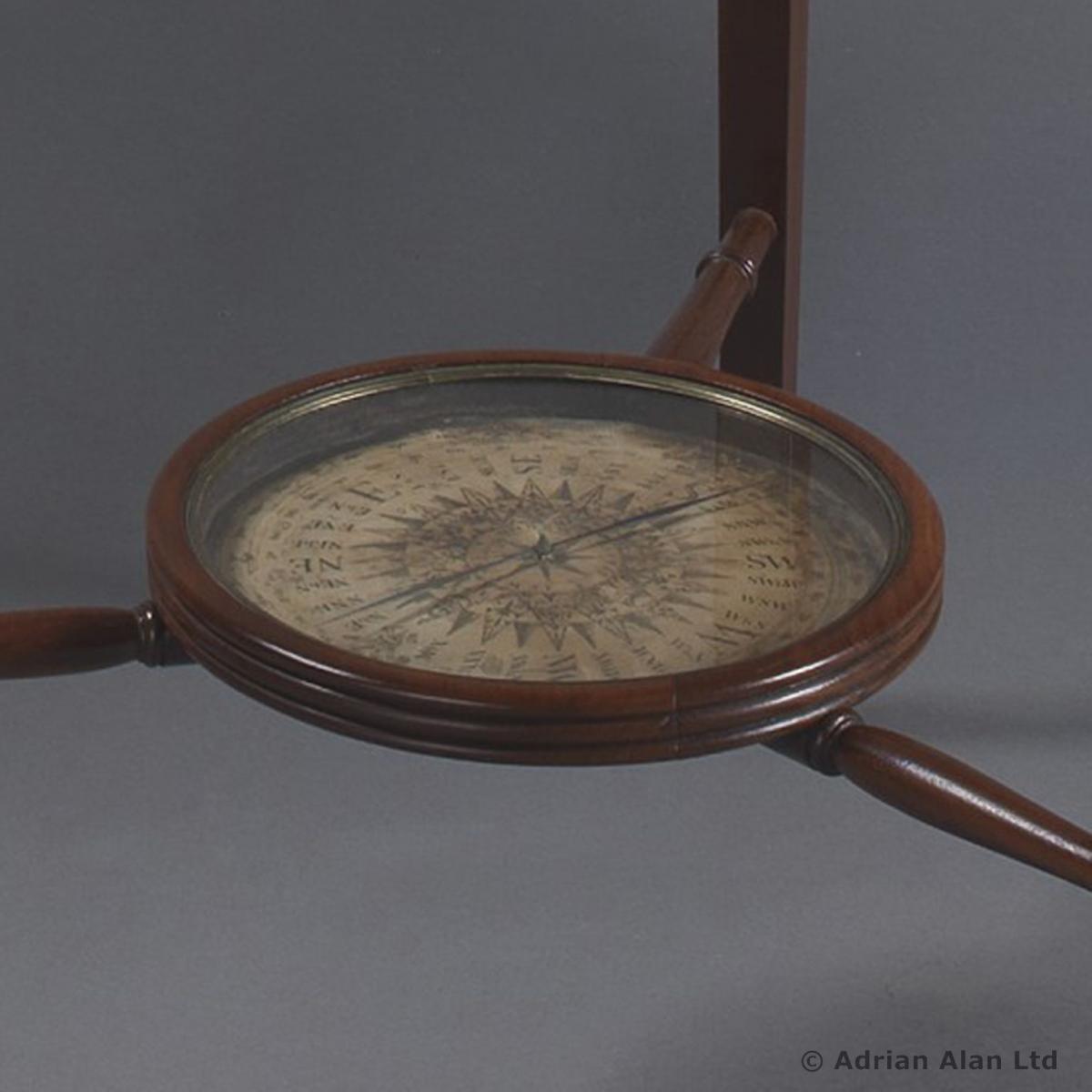 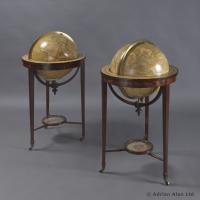 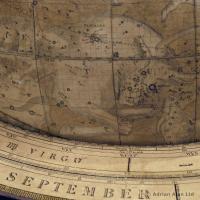 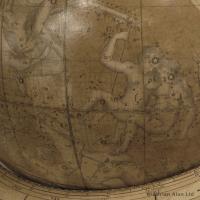 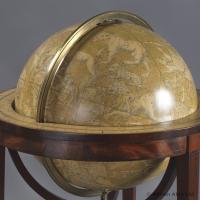 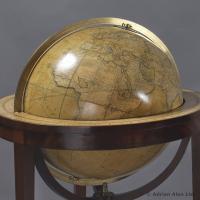 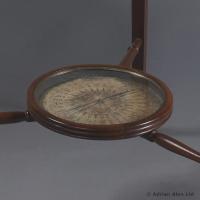 Comprising a Terrestrial and Celestial Globe.  Both globes with engraved brass hour dial and stamped meridian ring, the globe divided into four quadrants, with hand coloured horizon paper showing degrees of amplitude and azimuth, compass directions, days of the month and houses of the zodiac, mounted on a mahogany library stand, with the horizon raised on three tapering square section legs terminating in castors, the stand with a lower tier containing a mahogany cased compass with blue steel needle.

The terrestrial globe made up of two sets of twenty four hand coloured engraved gores, the cartouche reading ‘Smith’s Terrestrial Globe, London, Smith & Son, 63 Charing Cross’, the equator graduated in degrees of amplitude and azimuth and in hours and minutes, the colures and Greenwich meridian graduated in degrees, the ecliptic graduated in degrees with sigils for the houses of the zodiac, the continents finely detailed with nations, towns, rivers and mountains, the oceans with an analemma and decorated with finely detailed tracks of Columbus, Cook, La Perouse, Vancouver, Clerke, Gore, Ross and Furneaus, noting dates and location of rocks, with whimsical notes such as ‘Sea Weeds & Birds seen’, as well as detailed ocean tracks for generally used sailing paths between ports.

The celestial globe made up of two sets of twenty four hand coloured engraved gores laid to the ecliptic poles, the cartouche reading ‘Smith’s Celestial Globe, Smith & Son, 63 Charing Cross’, the axis through the celestial poles, the equator graduated in degrees, hours and minutes, the colours graduated in degrees, the ecliptic graduated in degrees with sigils for the houses of the zodiac, and in days of the month, with twilight zone, the constellations depicting mythical beasts and figures and scientific instruments, with the stars shown to nine orders of magnitude, with nebulae, and labelled with Arabic numerals and Greek and Roman characters, some of which are named.

The Smith family of London globe makers, founded in 1799, produced a variety of floor and table models of globes throughout the 19th century. Charles Smith was joined in business by his son in 1845.