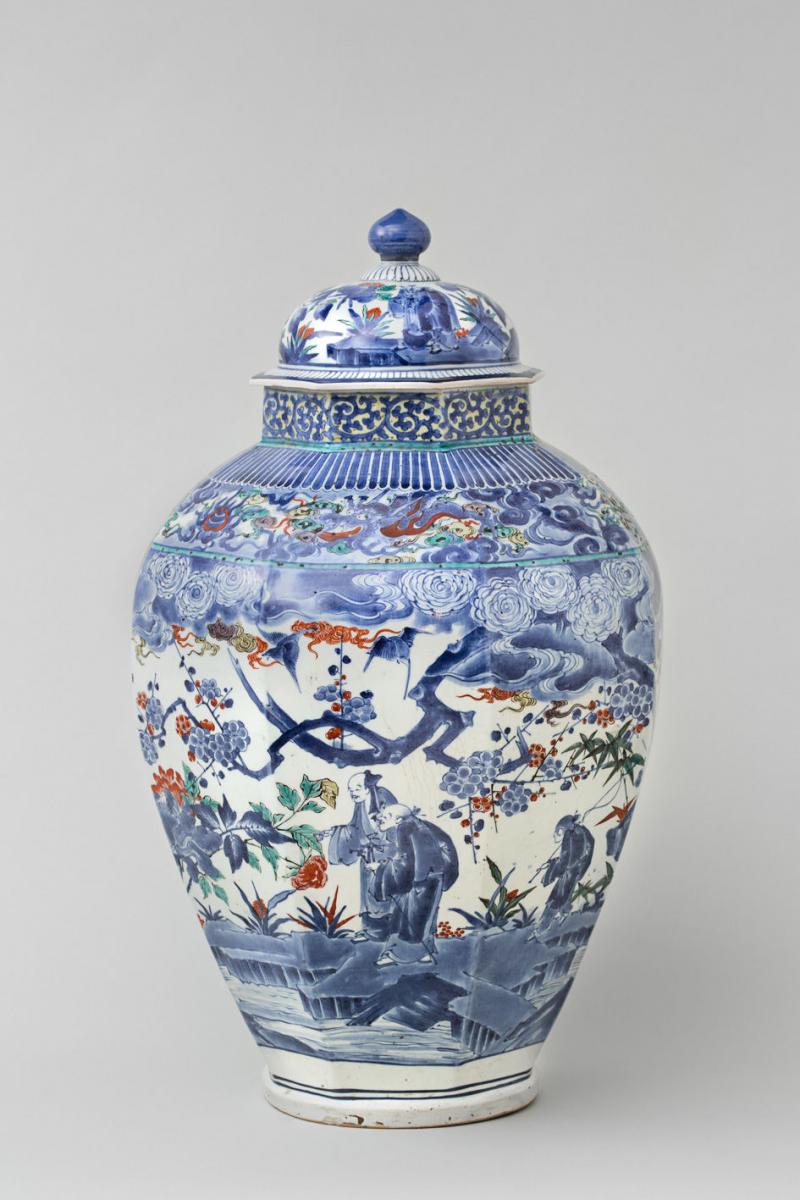 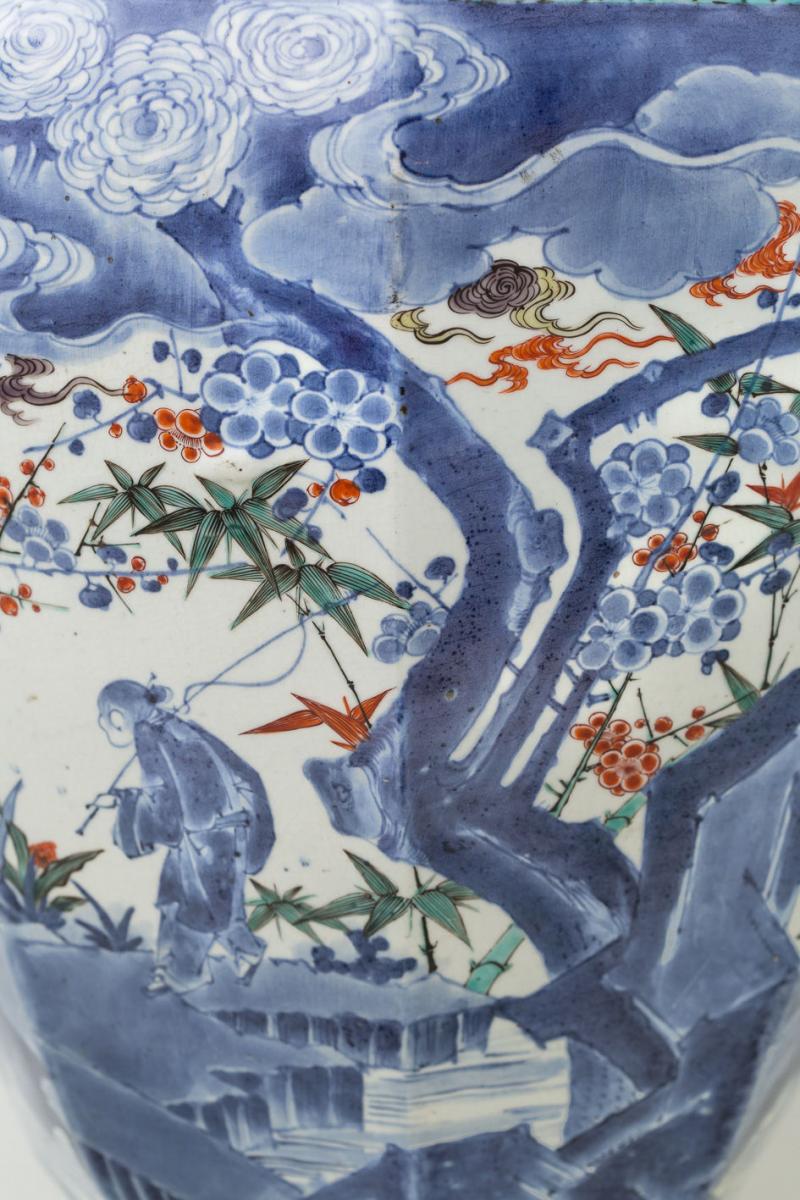 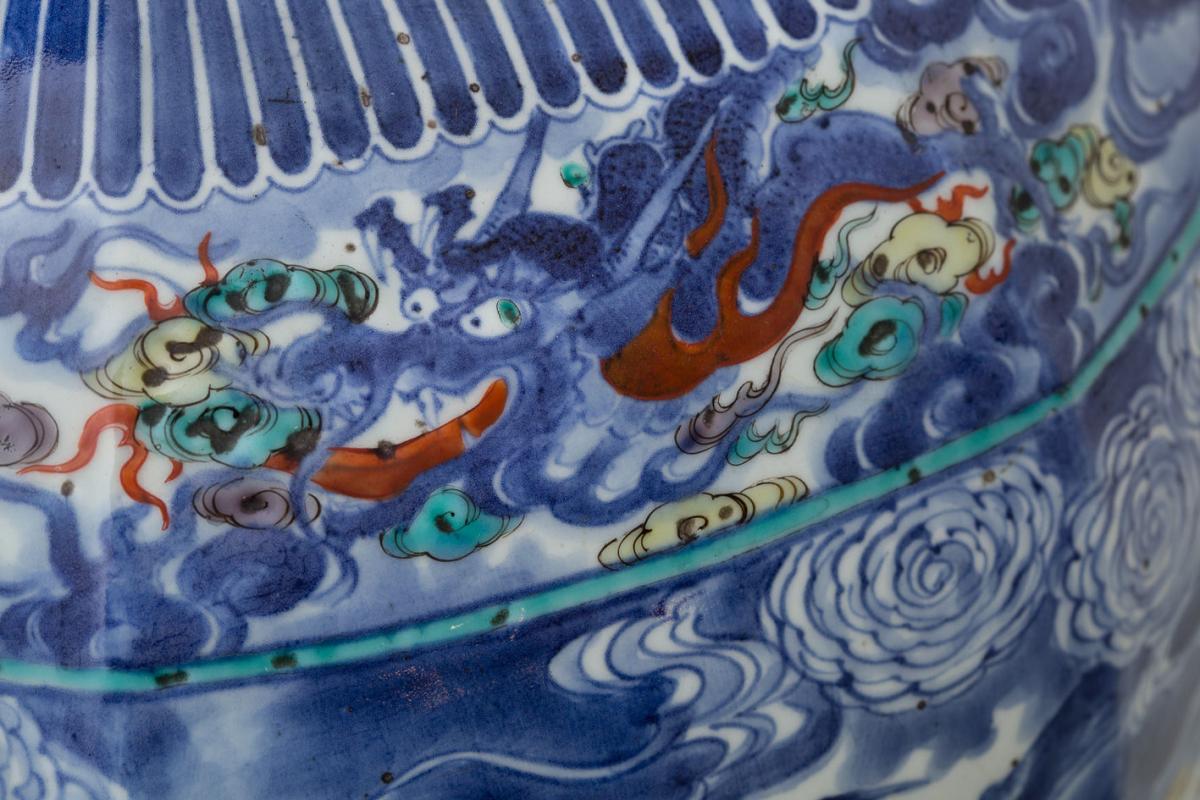 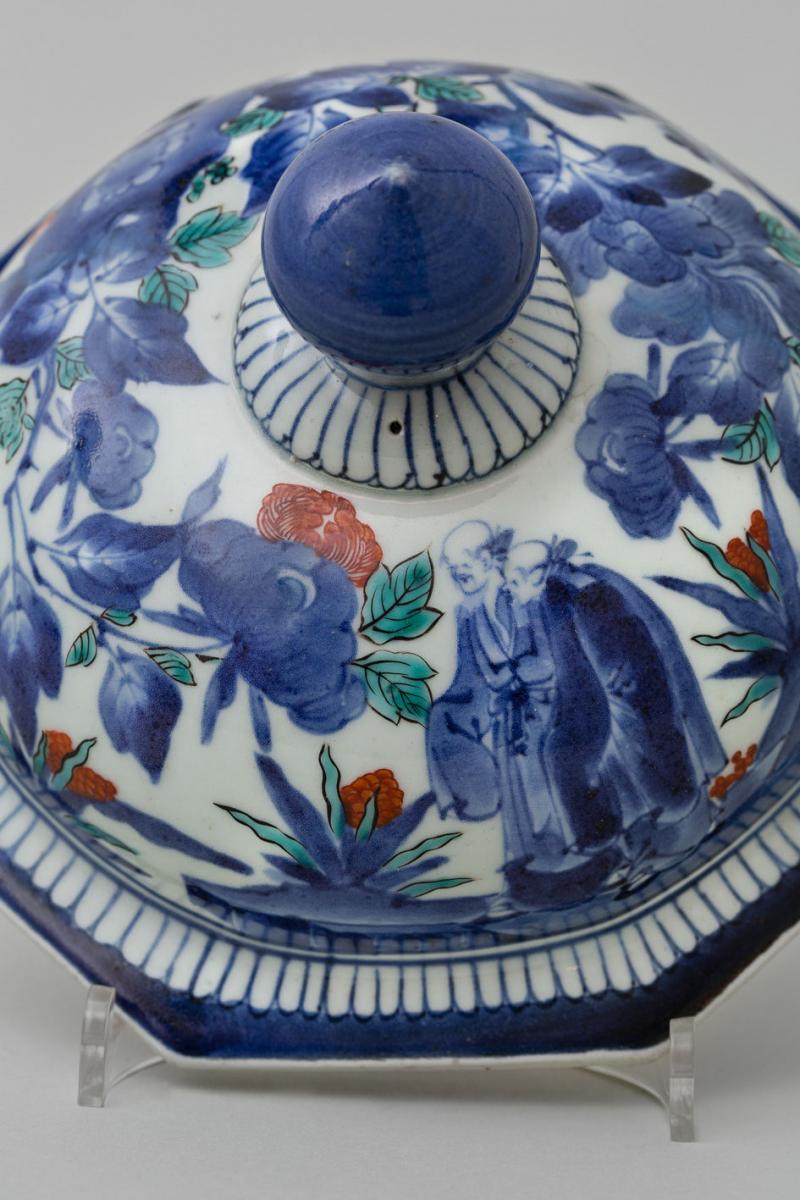 Of octagonal form finely painted in tones of underglaze blue and overglaze enamels in iron red, yellow, aubergine and green in Chinese Transitional style with an old man, his attendant, a further pair of figures and a fisherman at leisure amidst flowering plants issuing from stylised rockwork in a watery landscape, the green enamel leaves well delineated with the veins of the leaves in black, the blossoming peony in shades of blue; on the shoulder, a band of powerfully writhing, three-clawed dragons above cloud formations, each dragon, painted in the Chinese Transitional style, dramatically realised with bulging eyeballs, raised brows, huge fangs and elongated snouts, their scales well delineated, and below a band of  lappets, the short neck painted with scrolling leaves on a yellow ground, the cover, low-domed, with flared-out octagonal rim with a knop finial painted in underglaze blue and overglaze enamels with  two sages in a landscape, their long loose robes in shades of blue, in a verdant landscape of flowers and leaves, one leaf curled to show the underside in shades of green enamel , further leaves delicately veined in black, the blossoms in iron red

Professor Jorg believes that the polychrome colour is contemporary and belongs to a small group of 17th century Arita wares in underglaze blue and overglaze enamels  see, Christiaan Jorg, Fine & Curious, where he shows an example of this ware.

For an example of  three nearly identical vases but without the added colour acquired in 1723  see, Eva Strober, La Maladie de Porcelaine, the collection of Augustus the Strong, Edition Leipzig, 2001, Plate 69, page 156, where Strober writes: “The large covered jars represent a development and refinement of the decoration of the jars … and may be considered as a form of Japanese “Chinoiserie” for the European market.

In Japan large jars of this kind were called “chinko tsubo” (aloe jar), presumably because aromatic substances such as aloe wood were transported in these jars by the V.O.C. from South East Asia to Europe.  A similar slightly higher jar in the Imura Art Museum in Kyoto, recently reacquired from Europe, has slight variations in decoration compared with the Dresden jar.

A likewise similar jar and a covered dish decorated in the same style are to be found in the Kyushu Cerasmic Museum.  Sherds of this type have been excavated on the site of the Dutch trading post of the V.O.C. in Nagasaki, which are dated 1670-1700.”