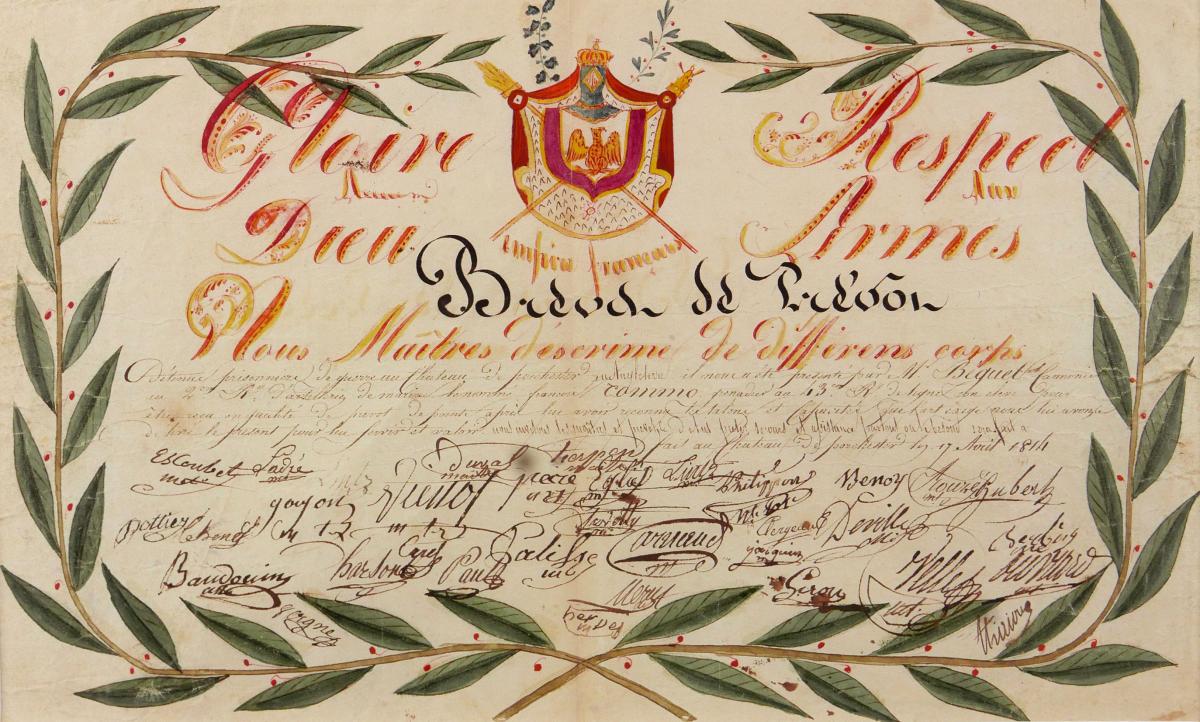 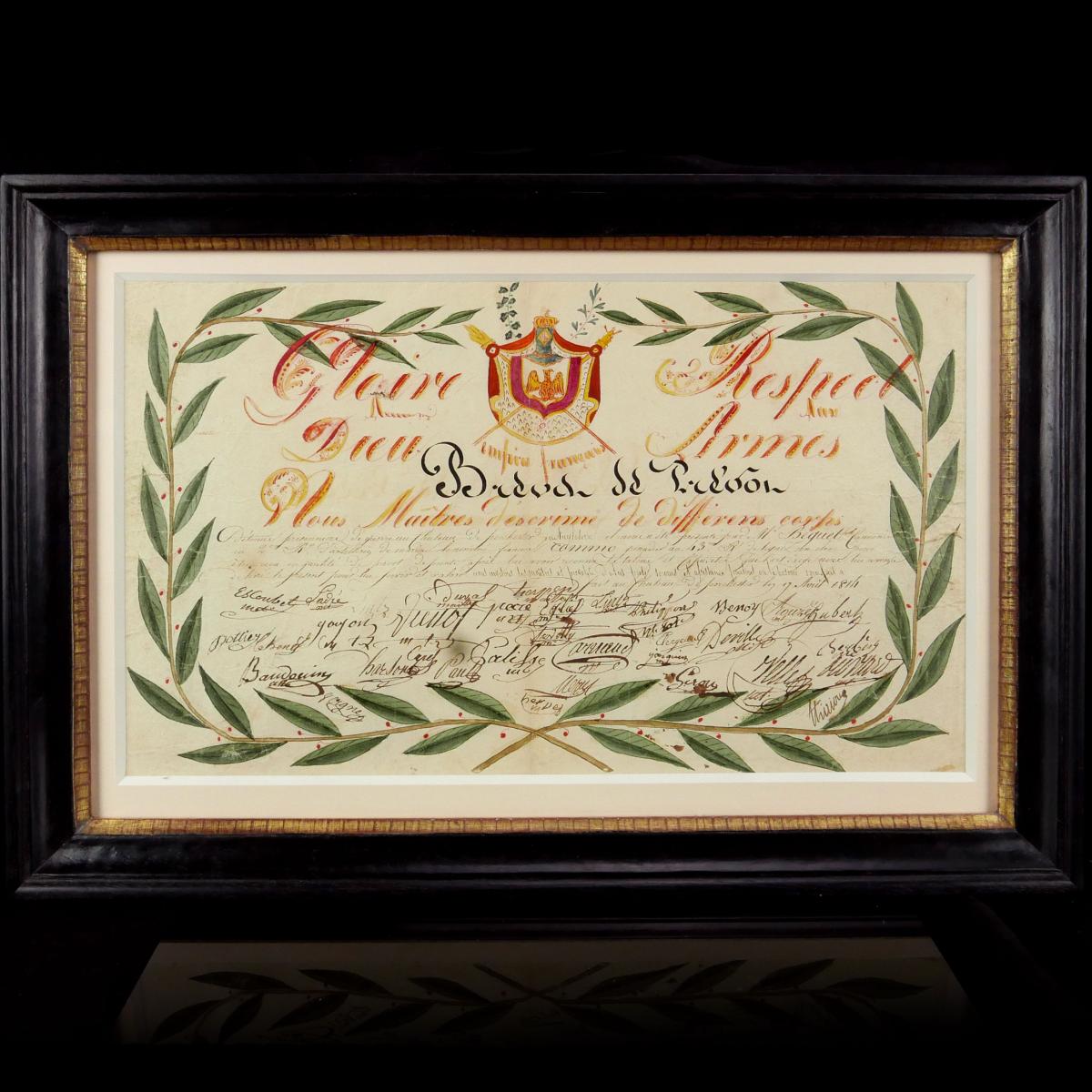 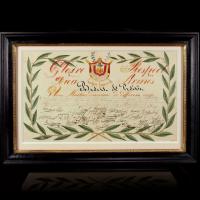 Watercolour and ink on paper. An illustrated manuscript document nominating Francois Commo, a grenadier of the 13e Infanterie Regiment de Ligne, as the graduating student of M. Bequet of the 2nd Marine Artillery, and endorsed by some 30 fencing masters of various corps, each signature underscored with an ‘M’ for master. Signed and dated Portchester Castle, 17 April 1814.

The date of the present document suggests that it was intended for a Prisoner of War returning home at the conclusion of hostilities between France and the Allied powers in 1814. Its purpose was to provide a PoW held at Portchester Castle in Hampshire with the necessary credentials to earn a living as a fencing instructor on his return home. In April 1814 some 8,000 prisoners of various nationalities held at Portchester were quickly released. Large numbers of ships the French carried from Portsmouth to France. Some had earned a reasonable living in captivity and a money changer was even employed so that they could exchange their pounds for francs. By May 1814 the castle was clear of prisoners, and the prisoner-of-war buildings were auctioned off on 12 July 1814.

Fencing was an activity permitted to prisoners of war by the Sick and Hurt Board, which looked after their well being as well as being responsible for the sick and wounded of the Royal Navy. It was thought that fencing allowed prisoners to maintain their training and a sense of military dignity. English Heritage’s Portchester Castle website illustrates a figurative detail from a certificate issued to a prisoner at Portchester in 1814 confirming that he had graduated as a master of fencing. Not all prisoners of war were held in the castle nor in the rotting hulks in Portsmouth Harbour. Many captured officers were allowed to live relatively normal lives in towns and villages on parole. There were two ‘parole towns’ close to Portchester – Bishop’s Waltham and Hambledon – and four elsewhere in Hampshire (Alresford, Odiham, Andover and Petersfield). A few tried to escape, but others made the best of the situation and gave lessons in French, dancing, or fencing while they waited to be released. 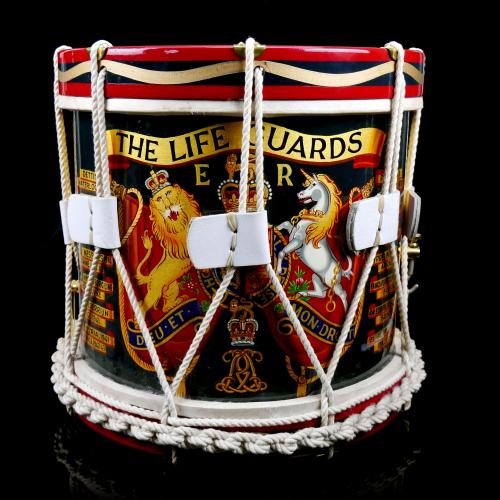 An Elizabeth II Life Guards Presentation Side Drum, 1980
The Armoury of St. James's 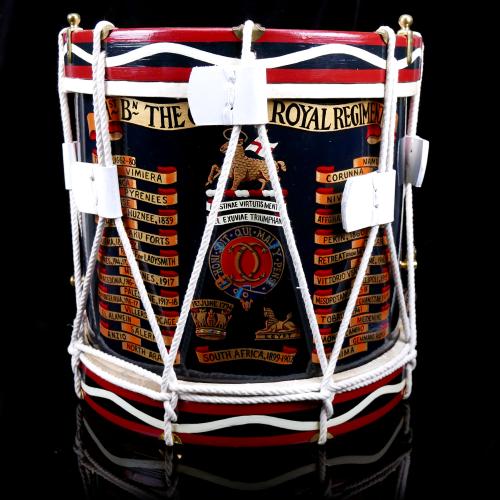 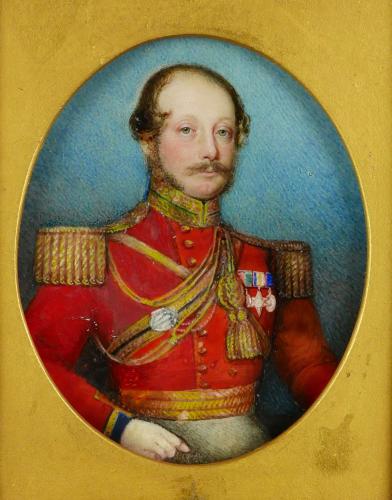 Hero of Aliwal - Portrait Miniature of Brevet Major Fyler, 16th Lancers, 1849
The Armoury of St. James's
View all from this dealer