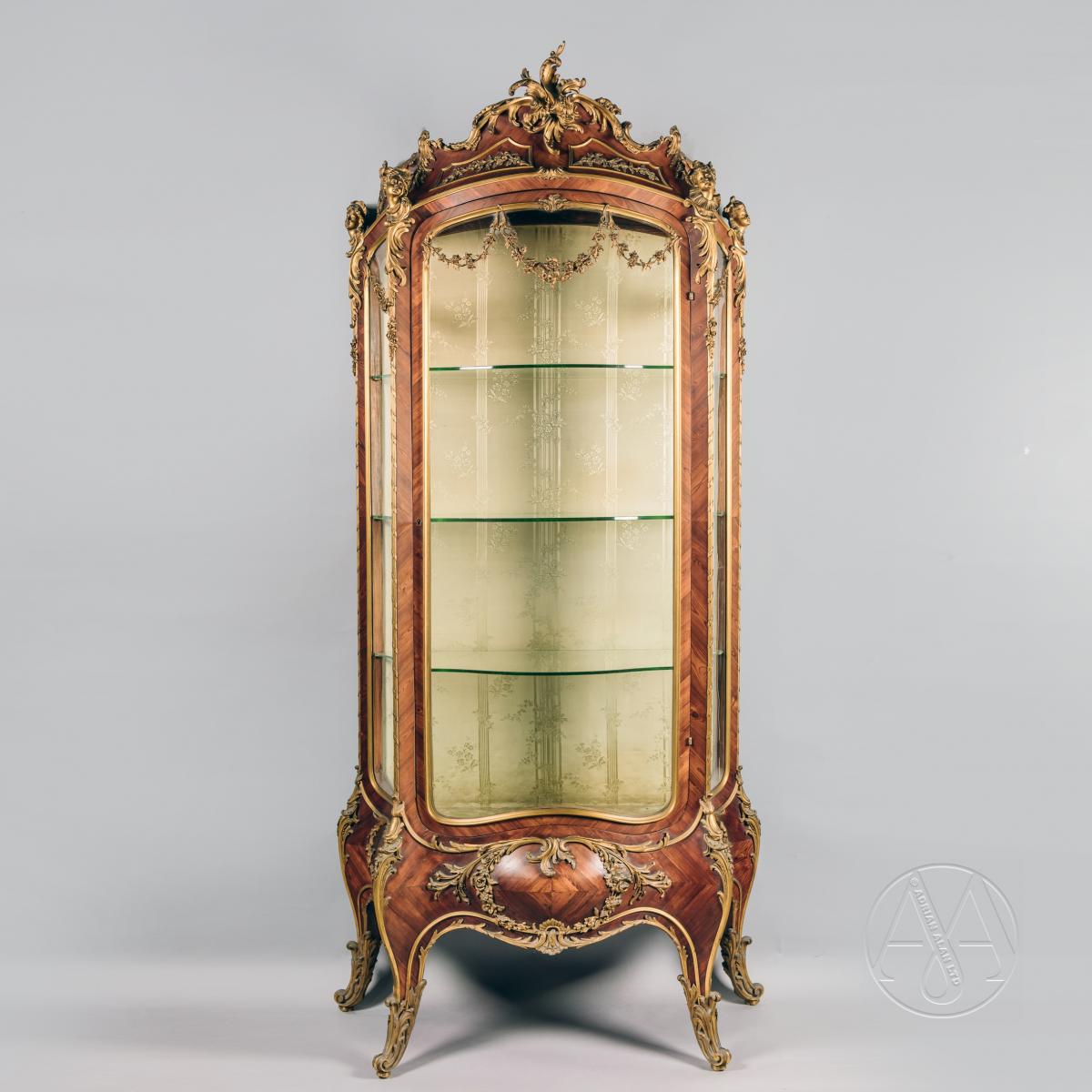 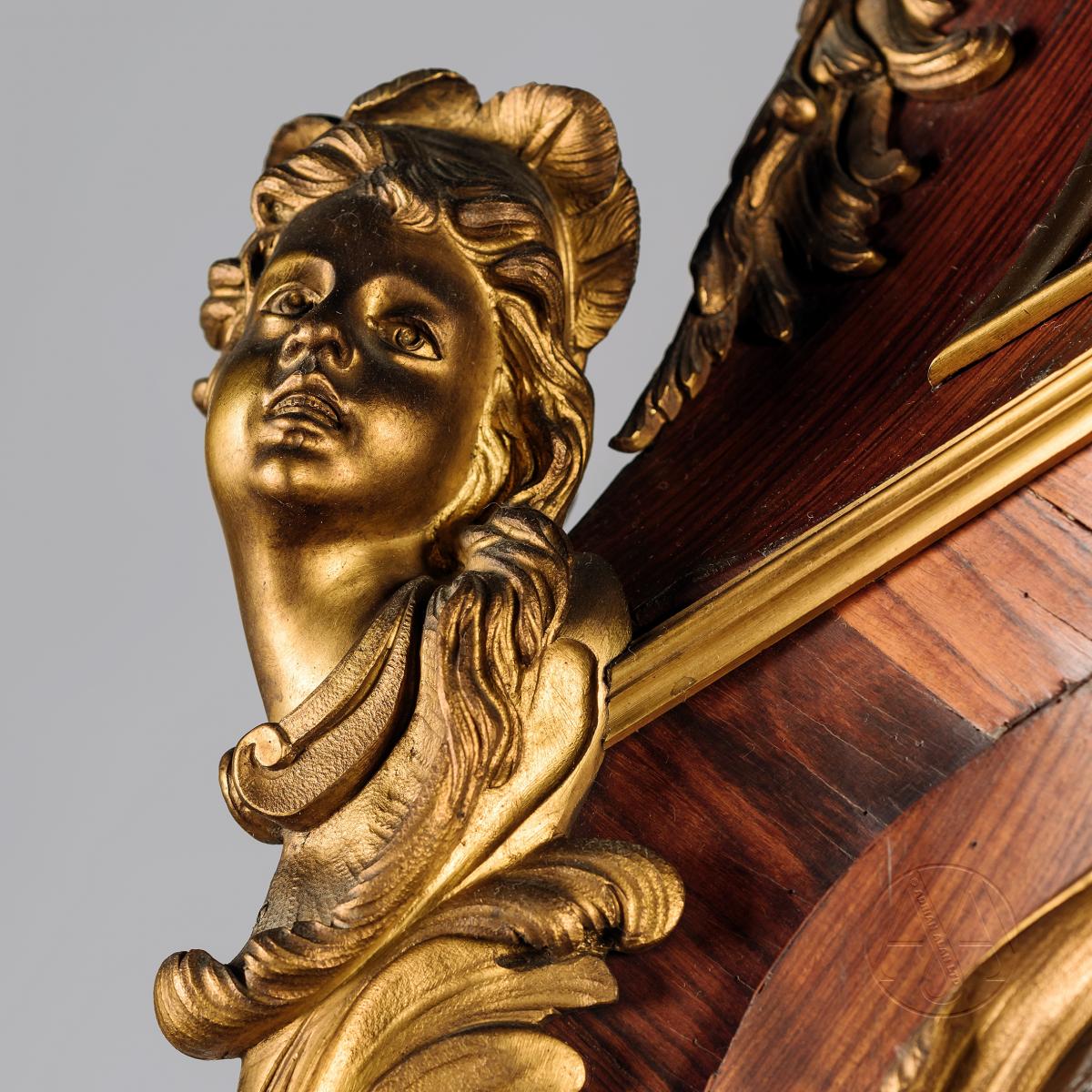 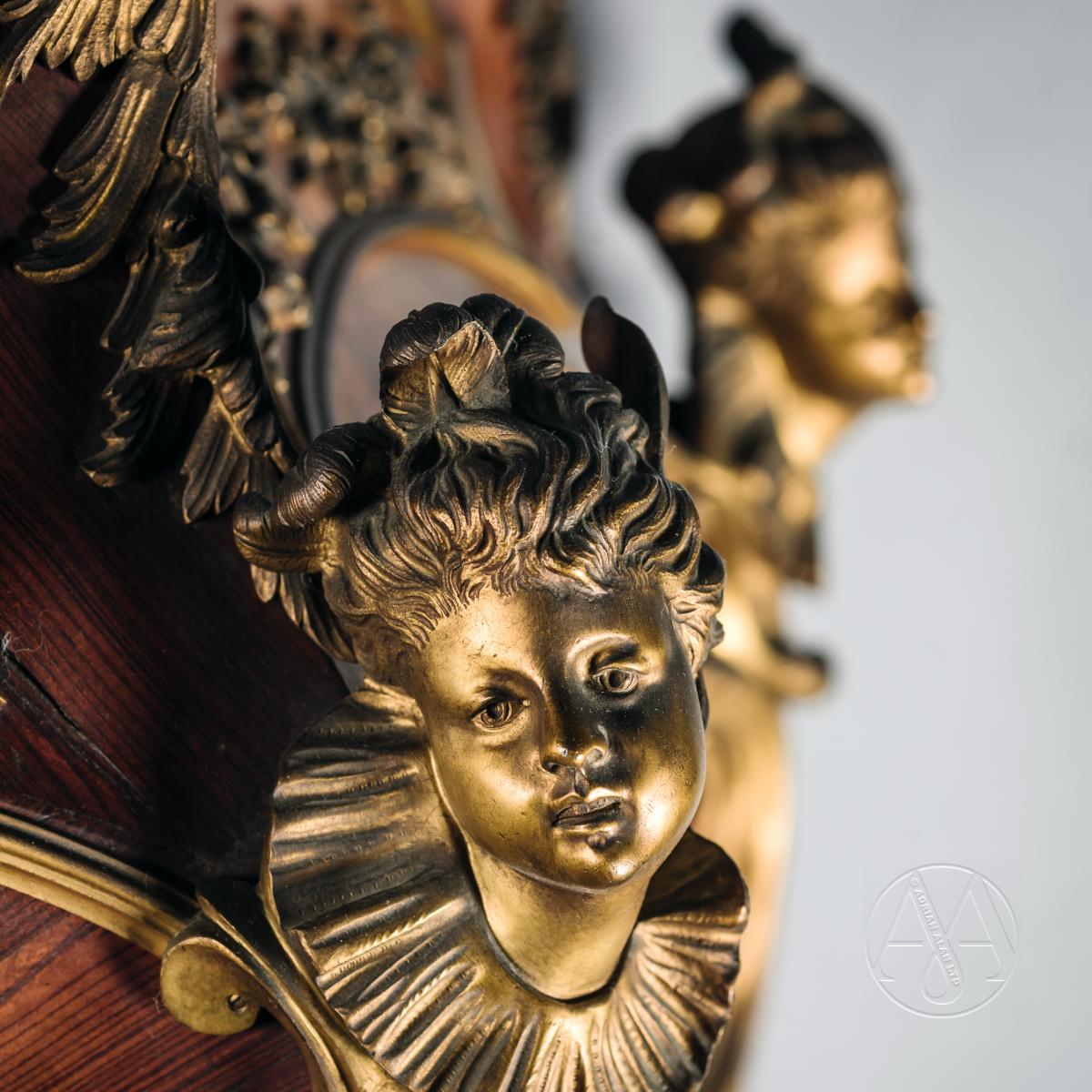 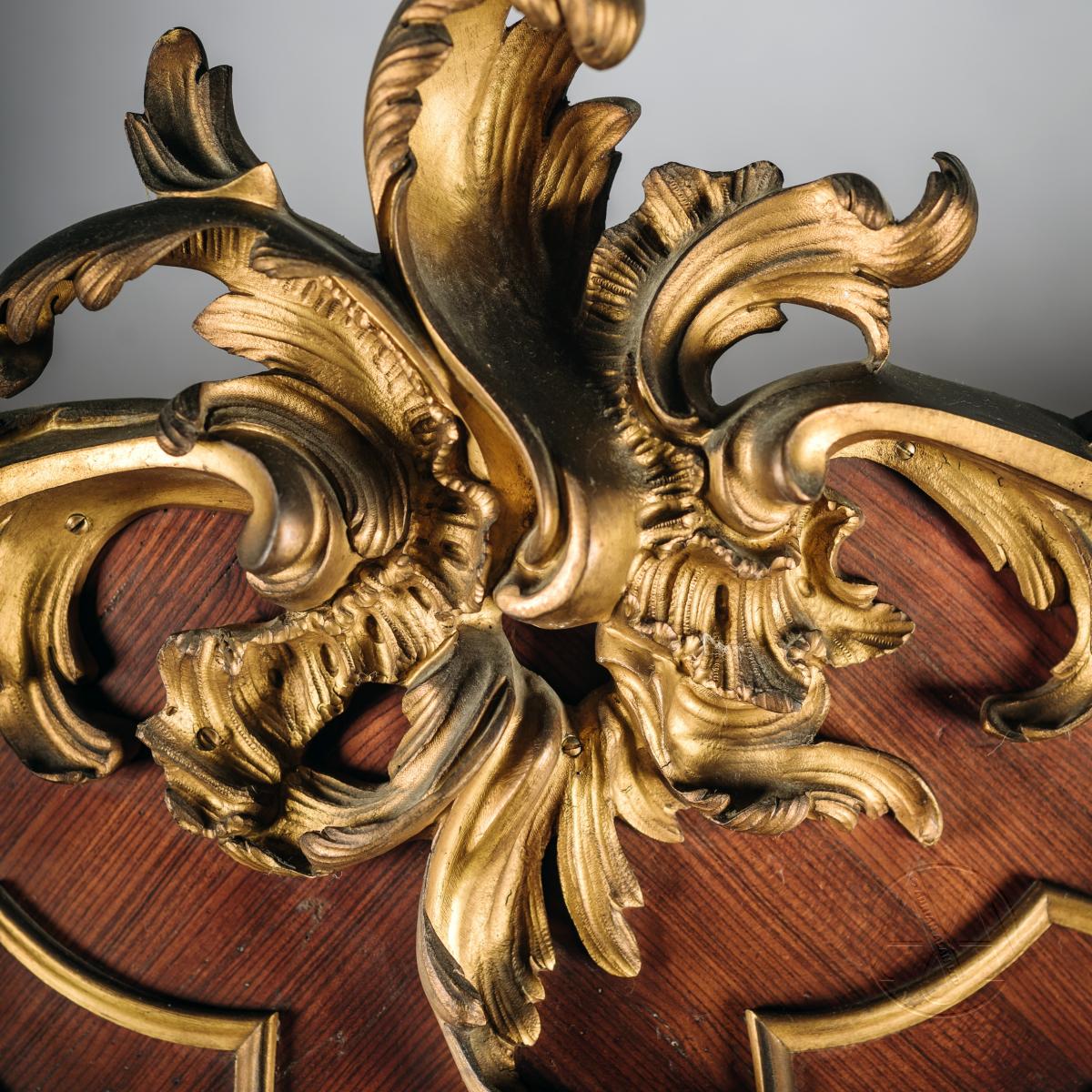 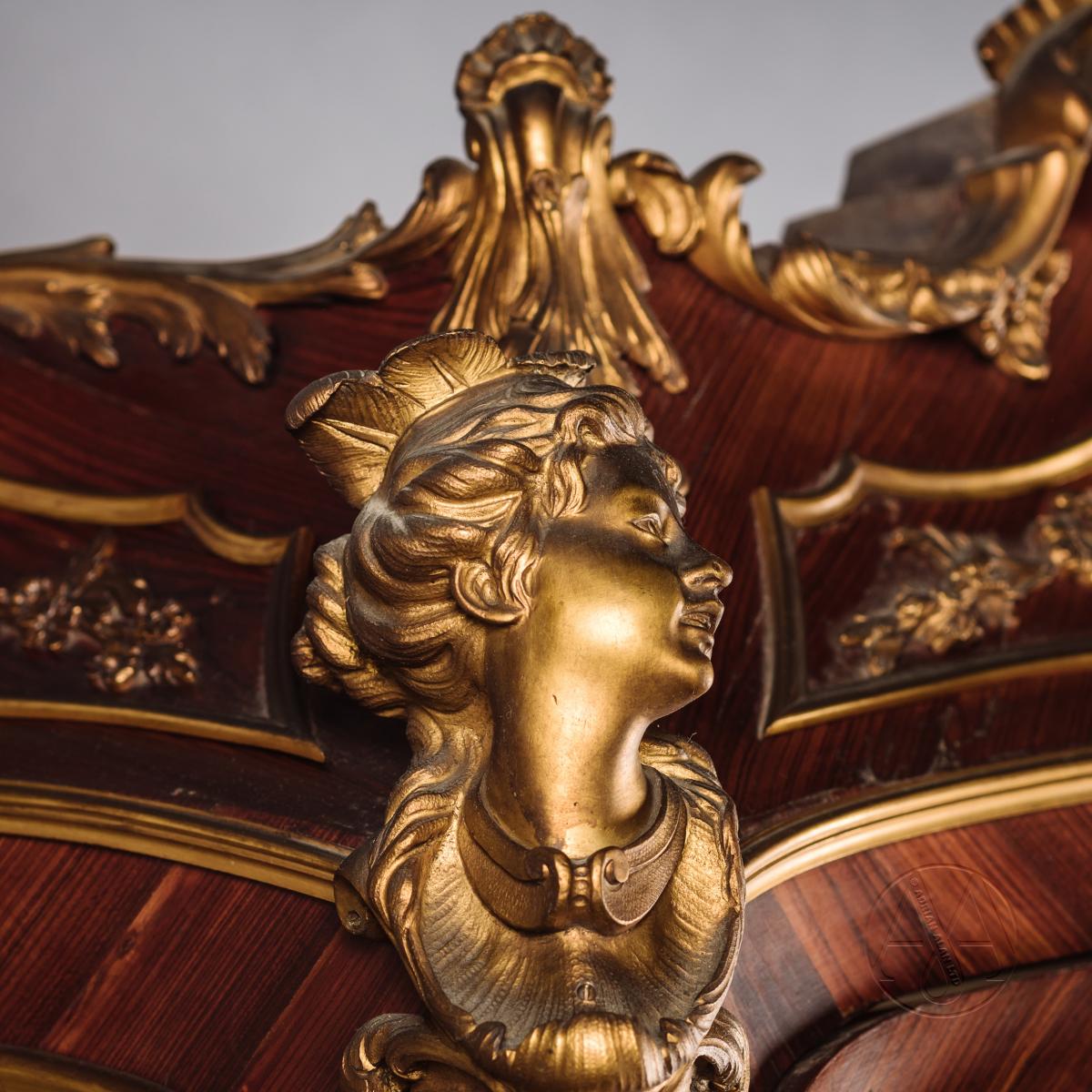 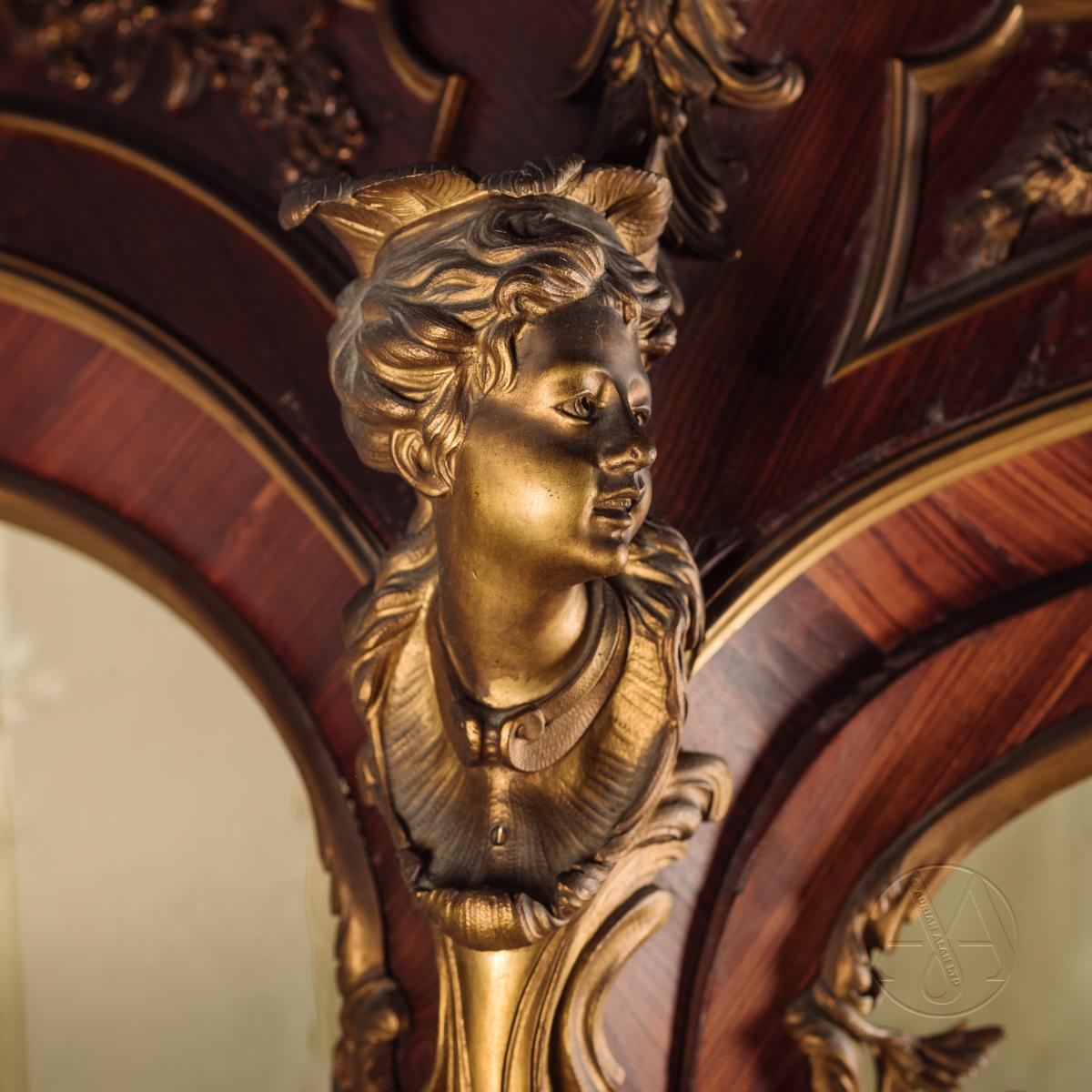 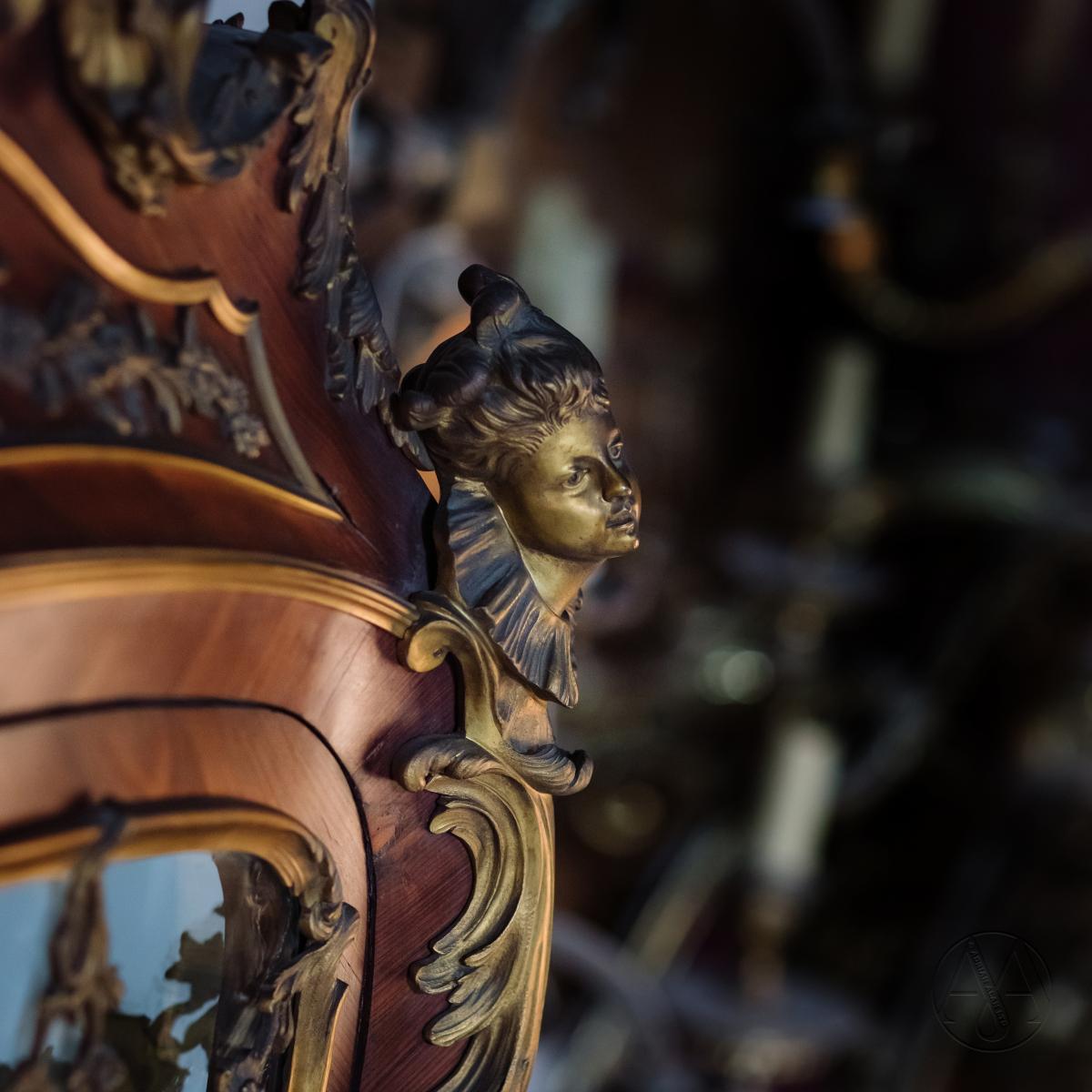 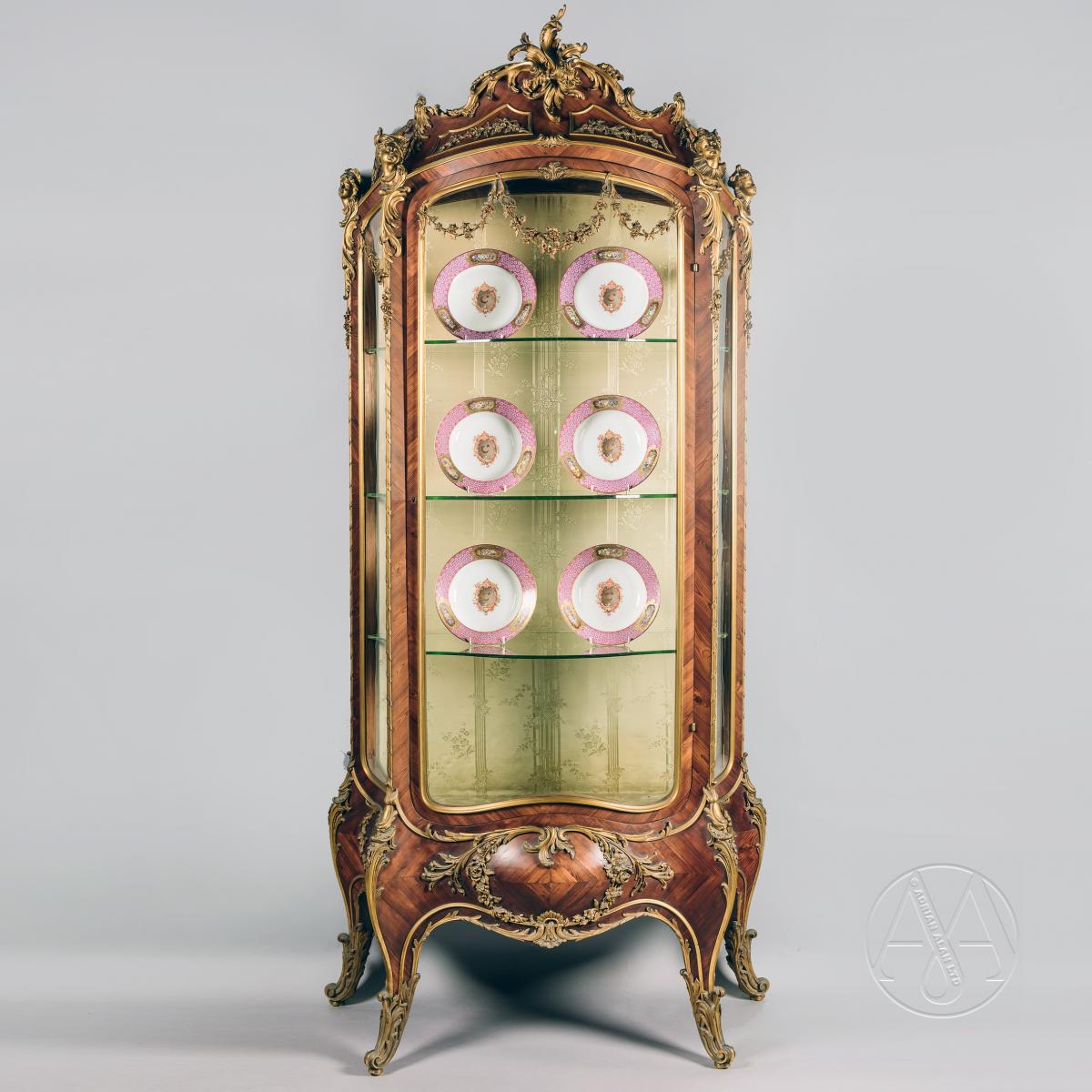 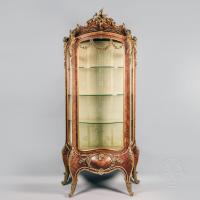 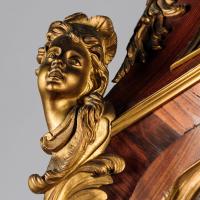 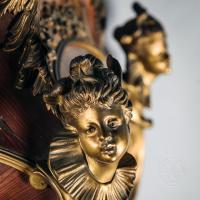 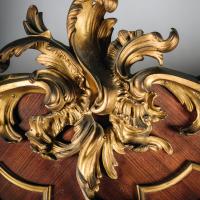 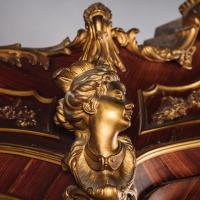 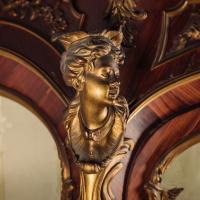 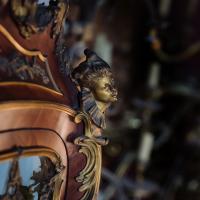 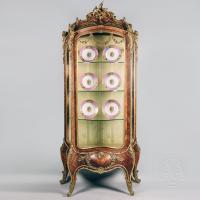 The back of the mounts on the four cornice corners and the floral swags cast with the monogram LM possibly for Leon Message; an old, possibly original label on the back with ink inscription: '1181 (?), galbee vitrine, Lxv, bois violette..101'.

This exceptional vitrine has a spreading pediment centred by a finely cast gilt-bronze stylised acanthus, ‘C’-scroll and foliate cresting, above a glazed bombé central door and concave sides. The silk lined interior is fitted with adjustable shelves and the angles headed by superb gilt-bronze figural espagnolettes with uplifted heads, plumes and ruffs.  The lower galbée shaped section of the vitrine  is mounted with foliate garlands and raised on cabriole legs with acanthus clasps and feet.

An almost identical vitrine of the same proportions, construction and design,  stamped to the lockplate ‘Mon Krieger Ameublement Paris’, was previously in our collection - ref B71310.

The fine proportions and the exceptional quality of the gilt-bronze mounts, make this vitrine highly desirable.

This rare vitrine is in excellent original unrestored condition. It is of good colour and has fine gilt-bronze mounts which would clean well but are currently a fine soft golden aged colour.

In 1850 the firm was re-formed as Antoine Krieger et Cie. When Antoine Krieger died in 1856, his son-in-law began running the company and decided to change the name to Cosse-Racault et Cie. Finally, in 1880 the name was changed again to Krieger, Damon et Cie when the firm merged with Damon et Colin, and was then located at 74 rue du Faubourg-Saint-Antoine.

Maison Krieger exhibited at the 1849 Exposition des Produits de l’Industrie in Paris and at the Universal Exhibitions of 1851 in London and 1855, again in Paris. At the 1851 Great Exhibition in London Krieger were awarded a medal for an exhibition oak sideboard made for a client from the Ottoman Empire. Maison Krieger created numerous furniture styles, and the firm exhibited at all the major exhibitions of the nineteenth century up to and  including, the 1900 Paris Exposition Universelle.

Maison Krieger is recorded as being a very active client of François Linke and occasionally the firm’s label can be found on Linke pieces.