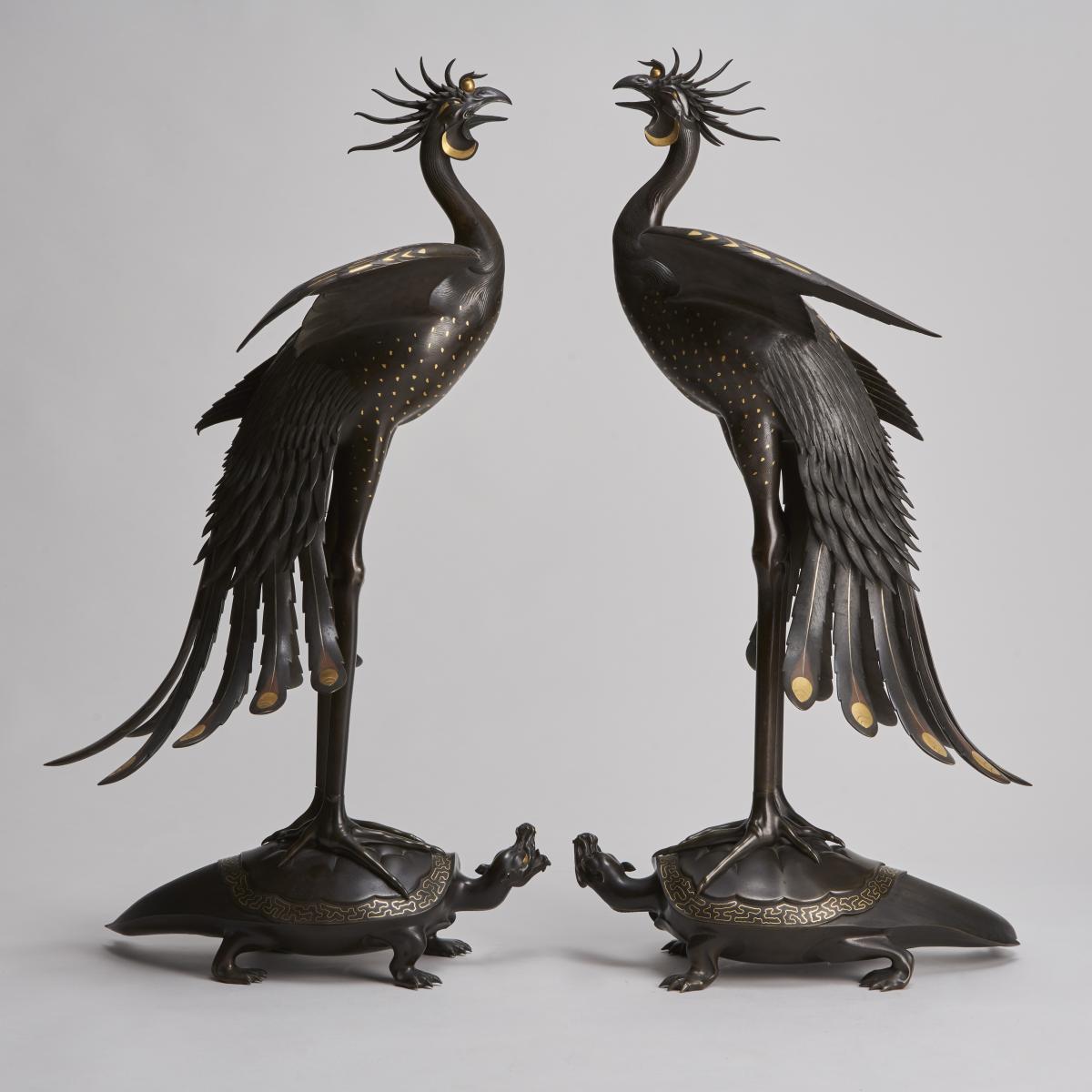 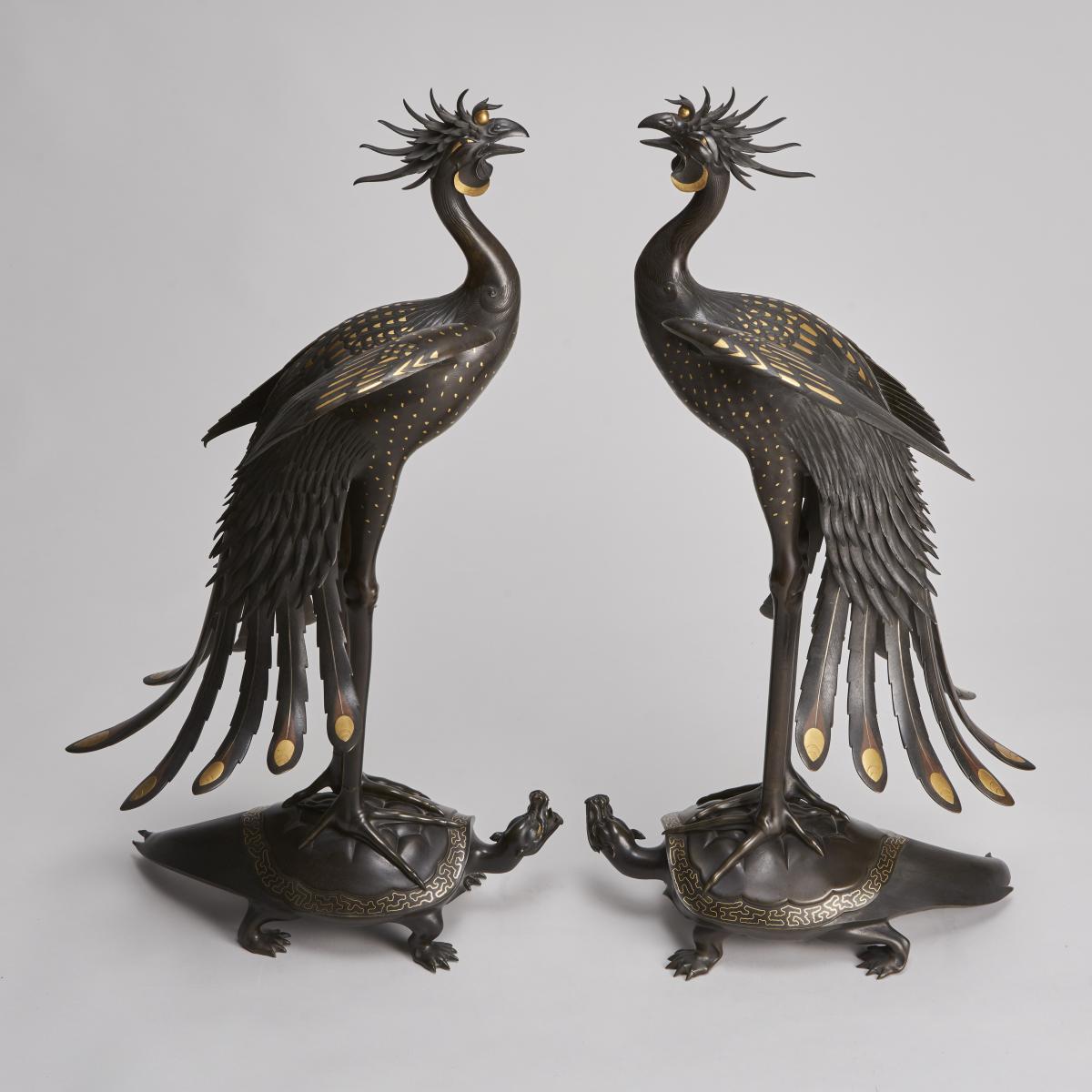 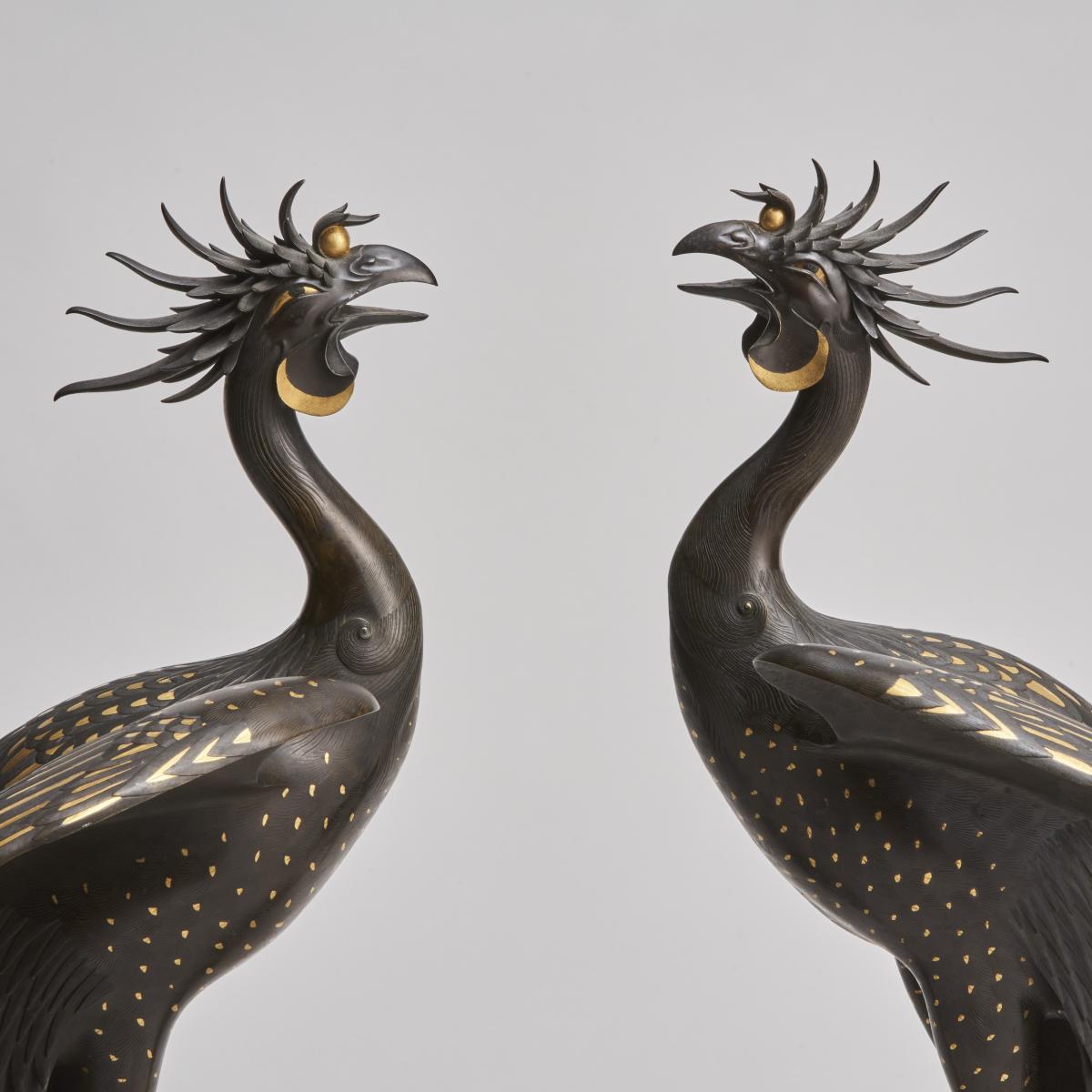 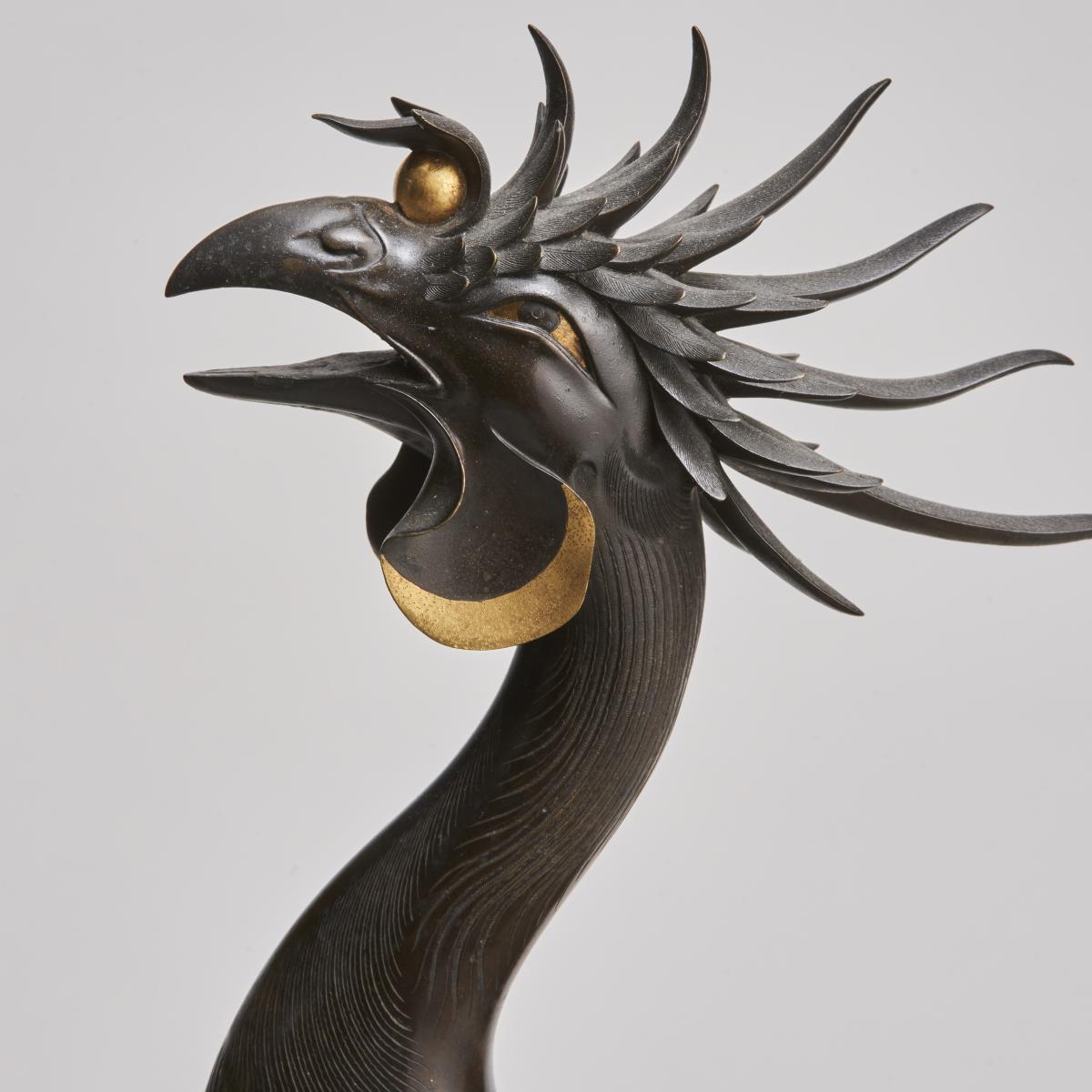 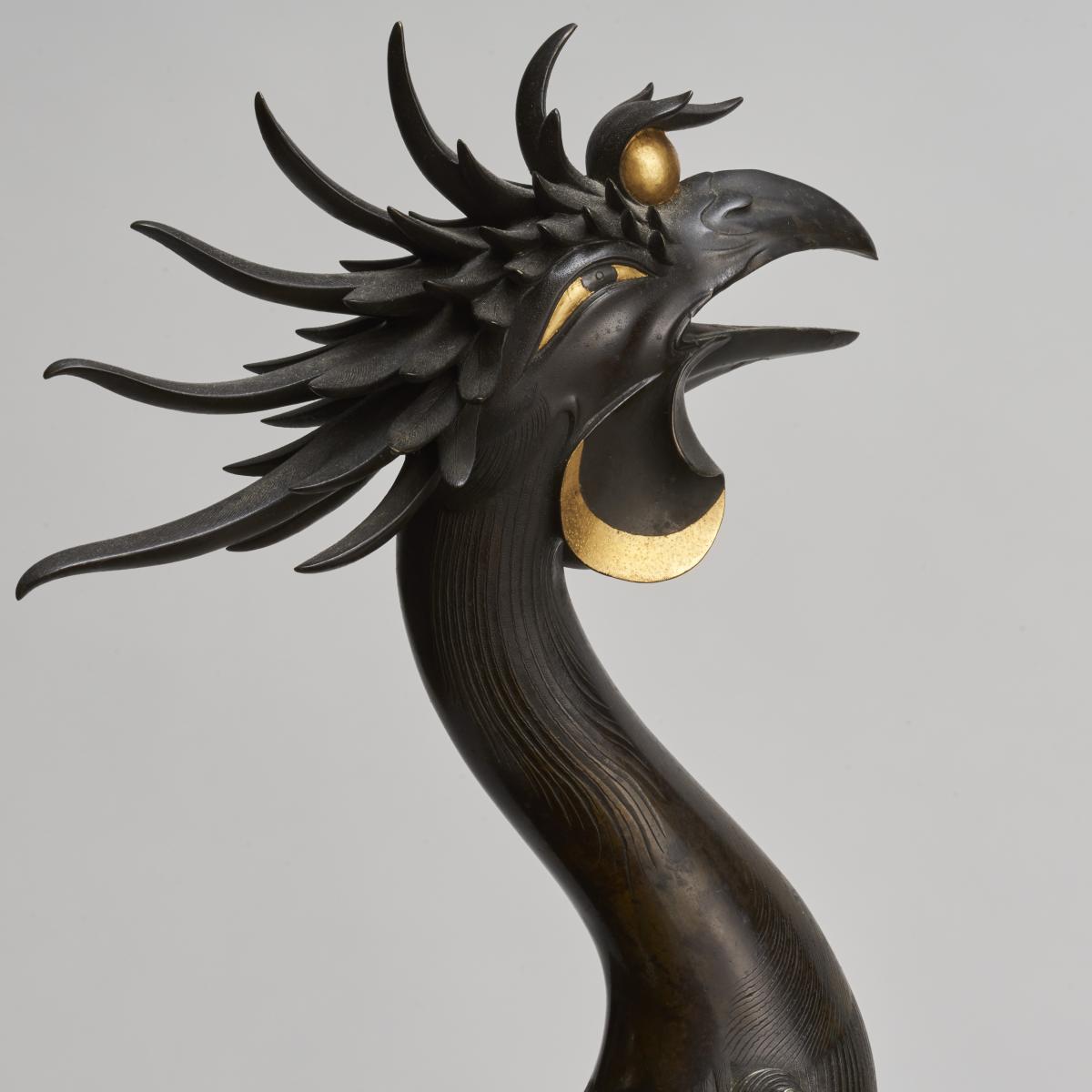 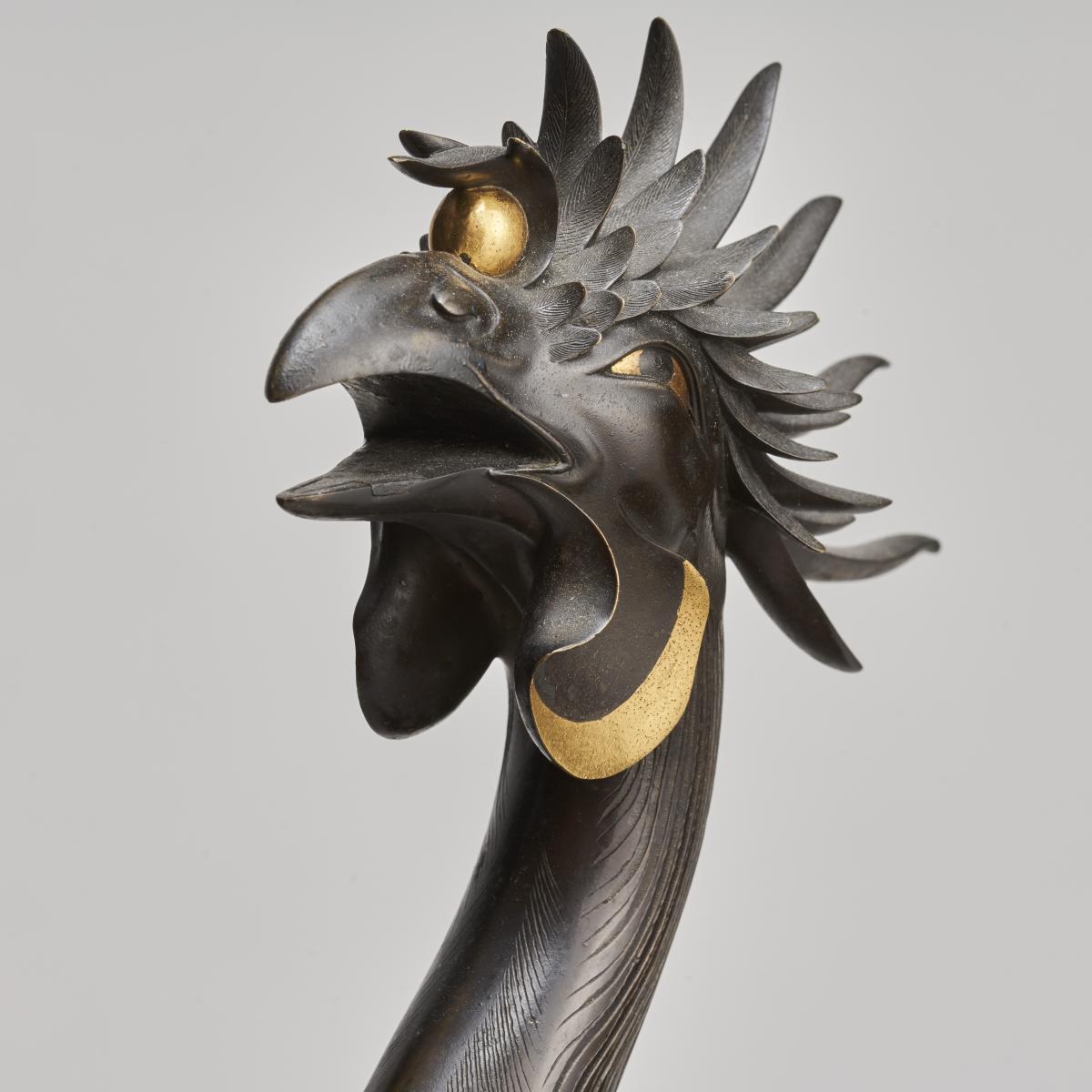 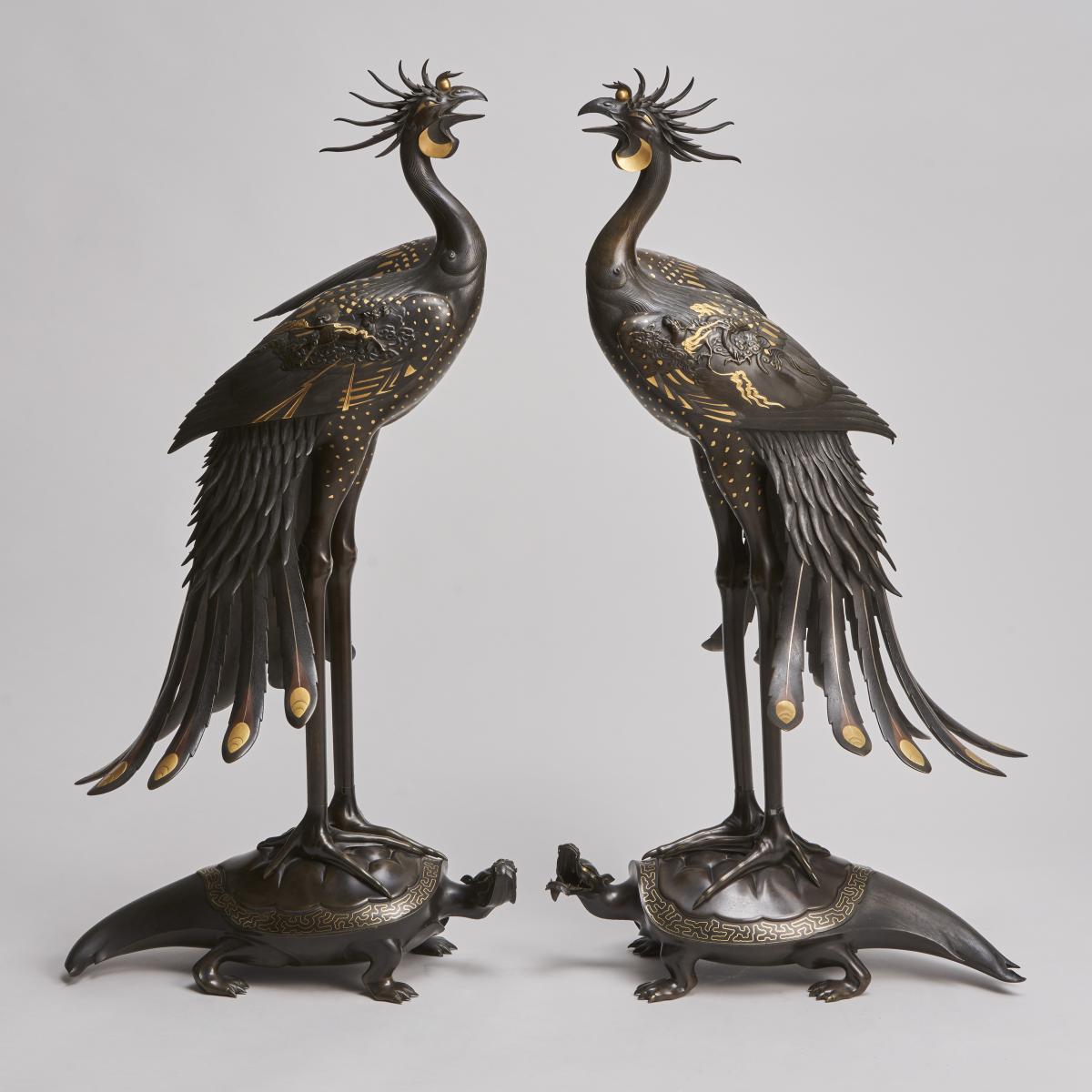 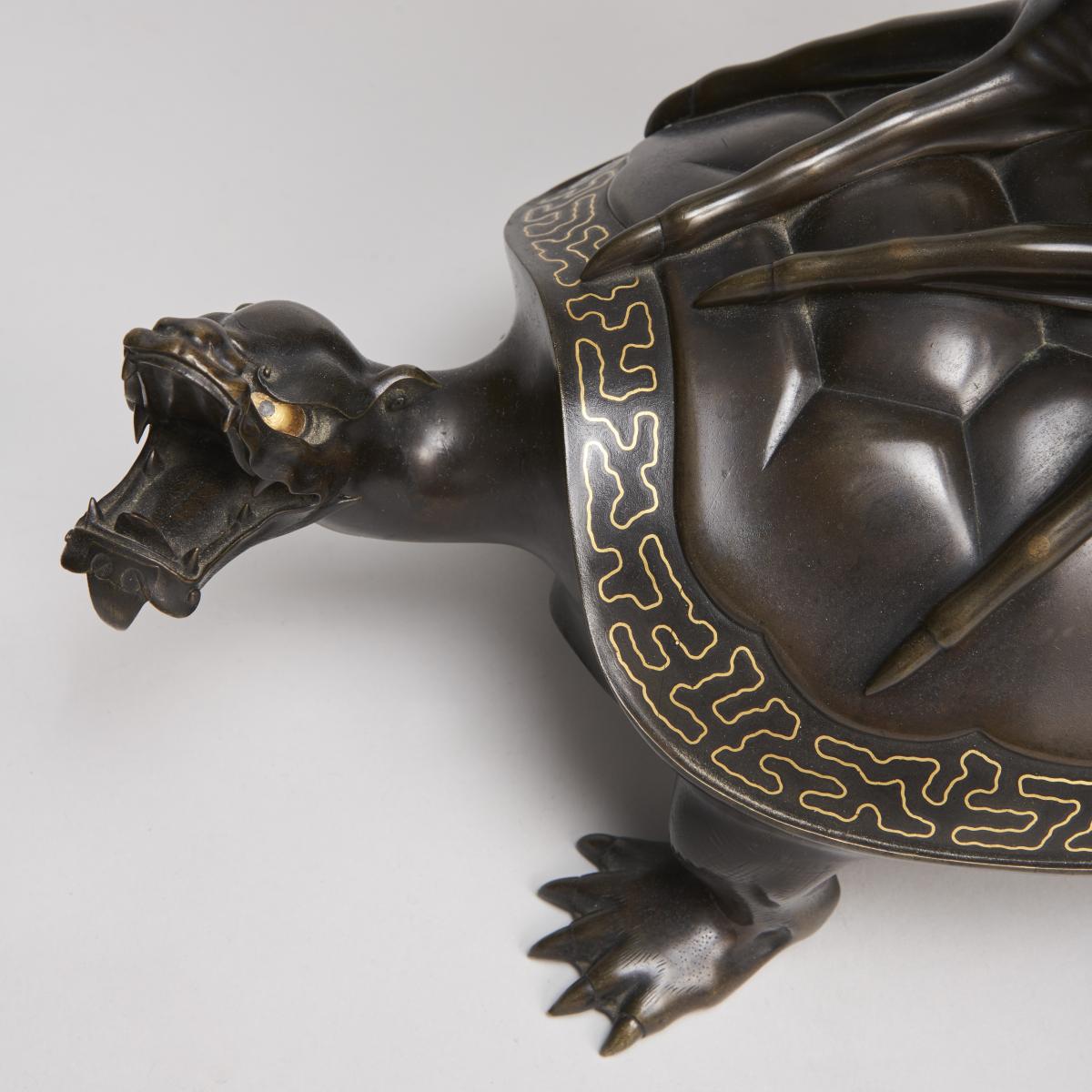 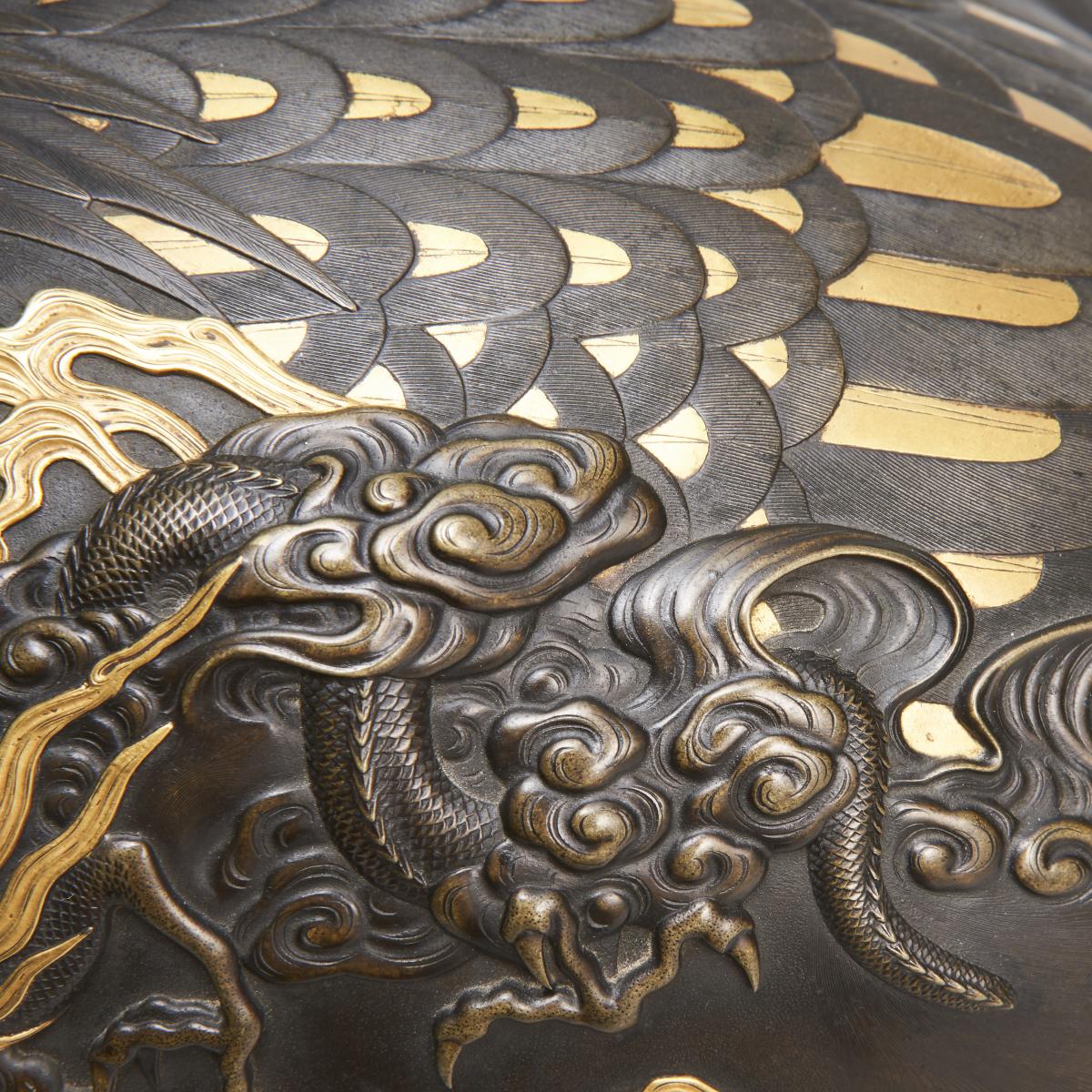 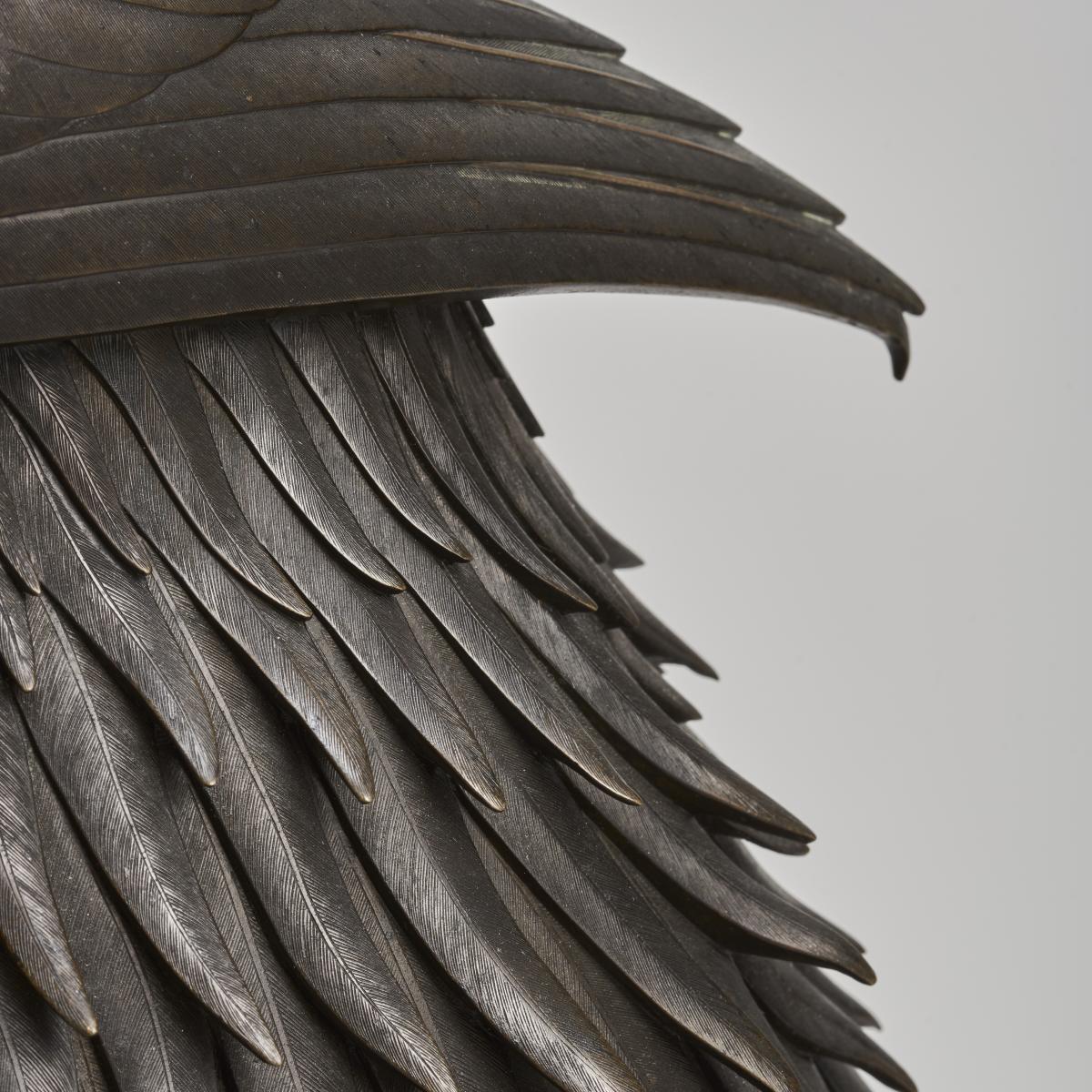 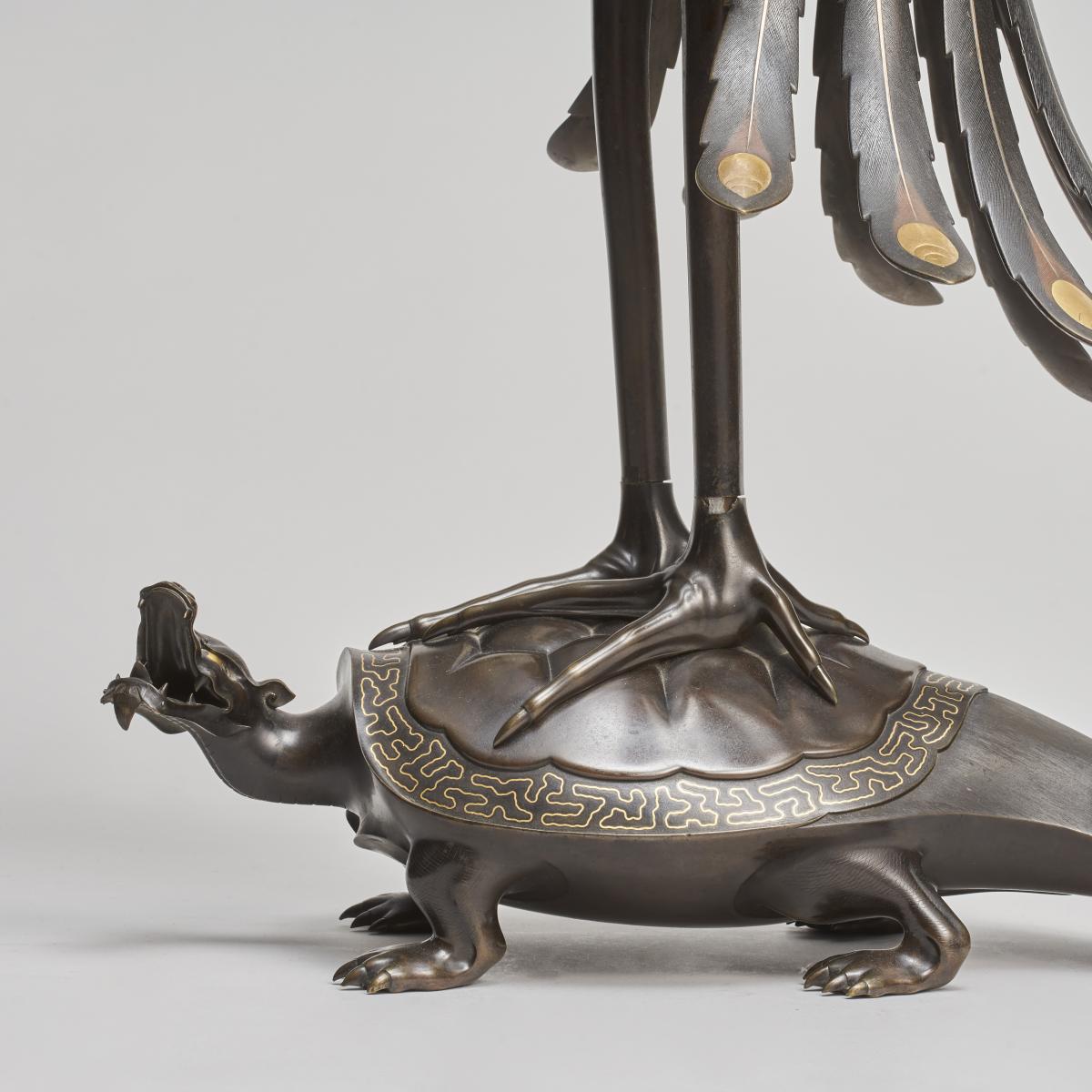 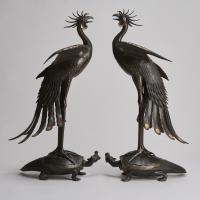 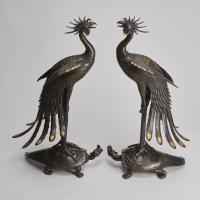 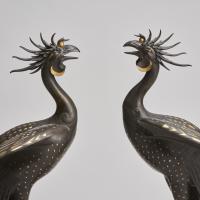 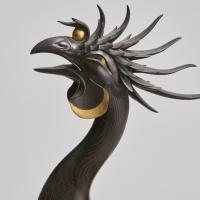 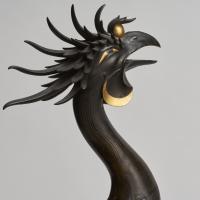 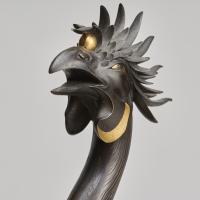 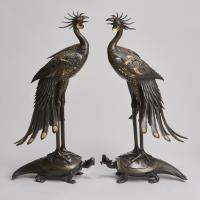 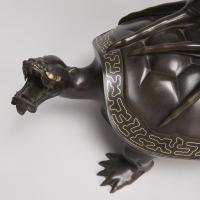 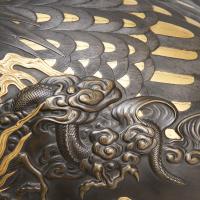 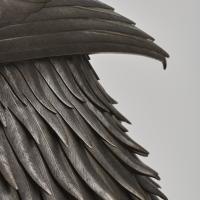 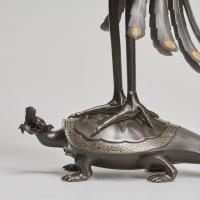 A large pair of Bronze Ho Ho Birds (Mythical Japanese creatures similar to the Phoenix). They are standing on the backs of Minogame, (long tailed tortoise.) The figures are designed to be symmetrical. One bird has its right wing extended whilst the opposing bird has its left wing extended. Similarly, one of the tortoises is looking to the right whilst the other looks to his left to create a perfect reflection.

The birds are decorated with fine inlay work using precious metals including Gold, Silver and Copper, there is an intricate dragon design to the closed wing of each bird. Similarly, each tortoise with a gold cloud inlay work and gold eyes.

Each Okimono is signed to the underside of the tortoise "Muroe Kichibei of the Etchu Province in the Country of Great Japan.

The phoenix is a powerful symbol in Japan, used to represent the Empress. When used to decorate an object or house it symbolises the loyalty and honesty of the people that live there, traditionally a phoenix only stays when a ruler is without corruption.

A minogame is a Japanese mythological creature based on the tortoise. It is believed that once a tortoise reaches 1000 years old it becomes a minogame, the long tail is actually alge and weeds which have grown on the shell due to the extreme longevity of the beast.
Due to their old age minogame represent longevity and are often seen with the luck god Fukurokuju.

Dragons are hugely significant in Asian culture. Known as the Ryu or Tatsu in Japan, they are closely related to the Chinese Long and Korean Yong.  Like all Asian dragons they lack wings and are serpent-like in form. The Japanese dragons rarely fly and usually reside in or near the sea and other bodies of water.

Japanese dragons have positive symbolism. They are good and represent wisdom, generosity and they are portrayed as using their powers to help mankind. (Unlike the Dragons of Western mythology.)

Muroe Kichibei was a metalworker who lived and worked in Takaoka and Kanazawa, he is known for his very fine works including many Buddhist subjects and animals. 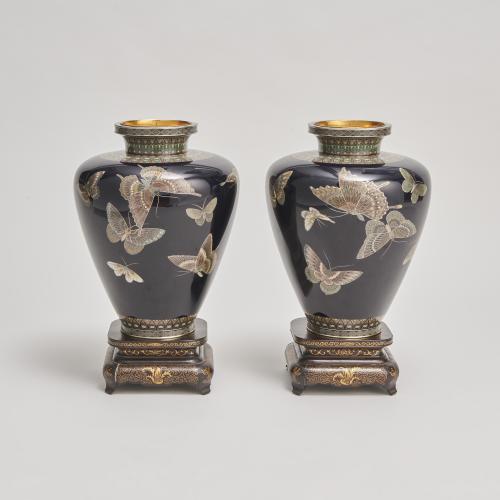 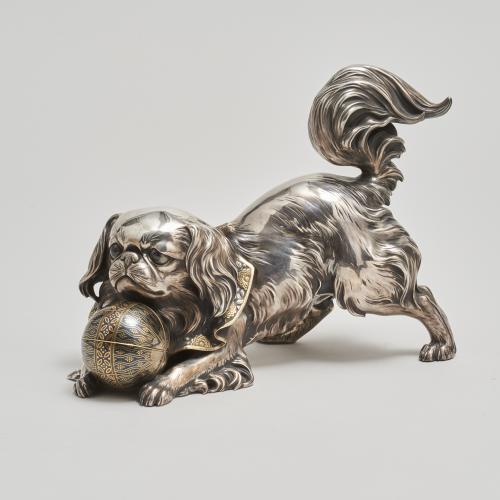 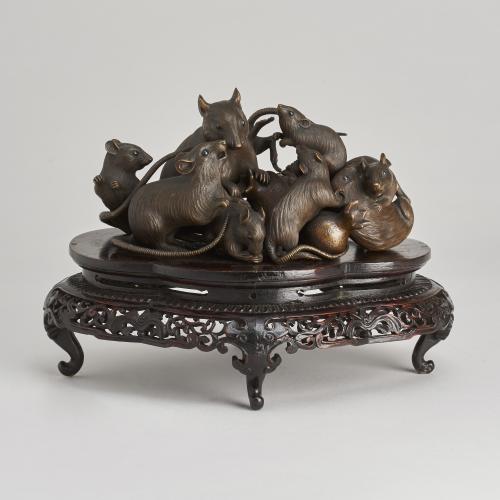