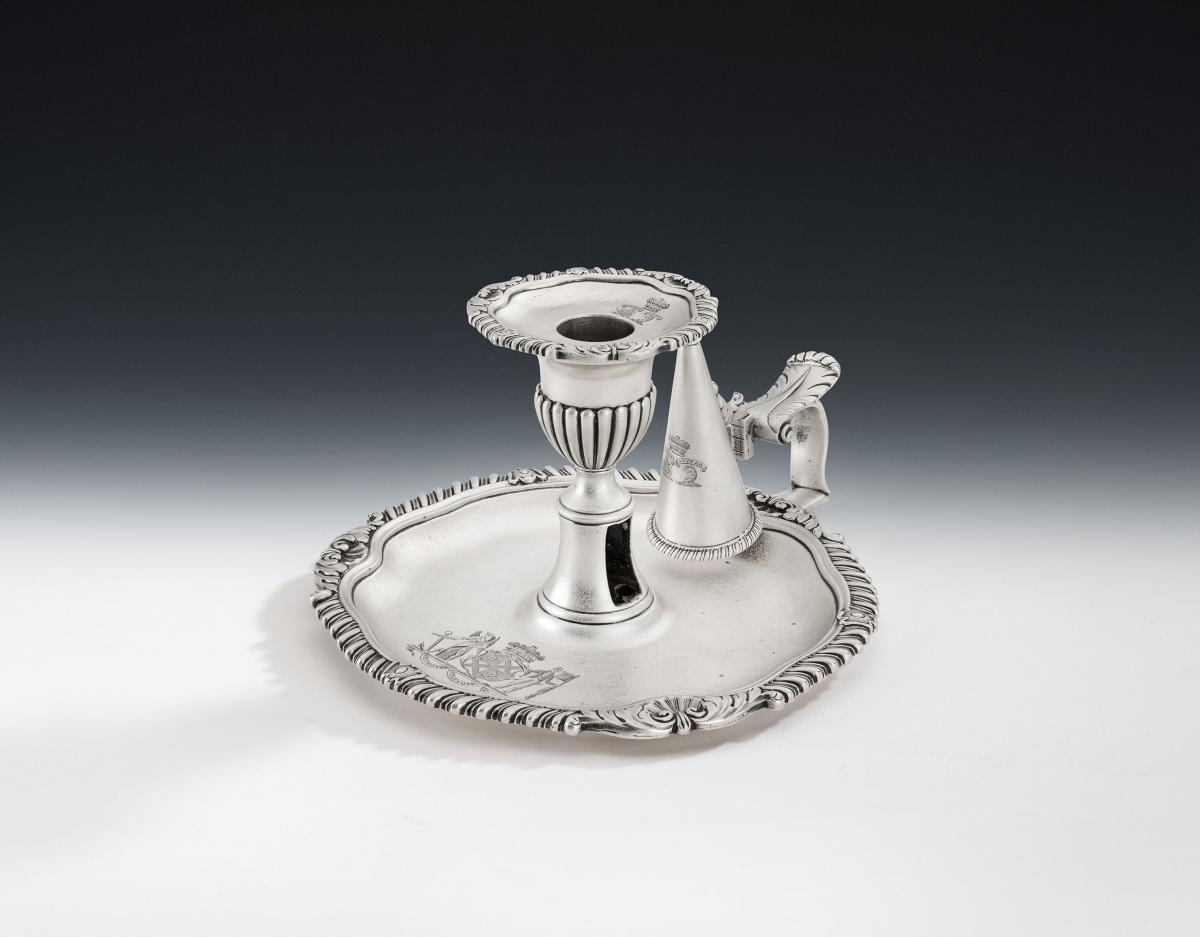 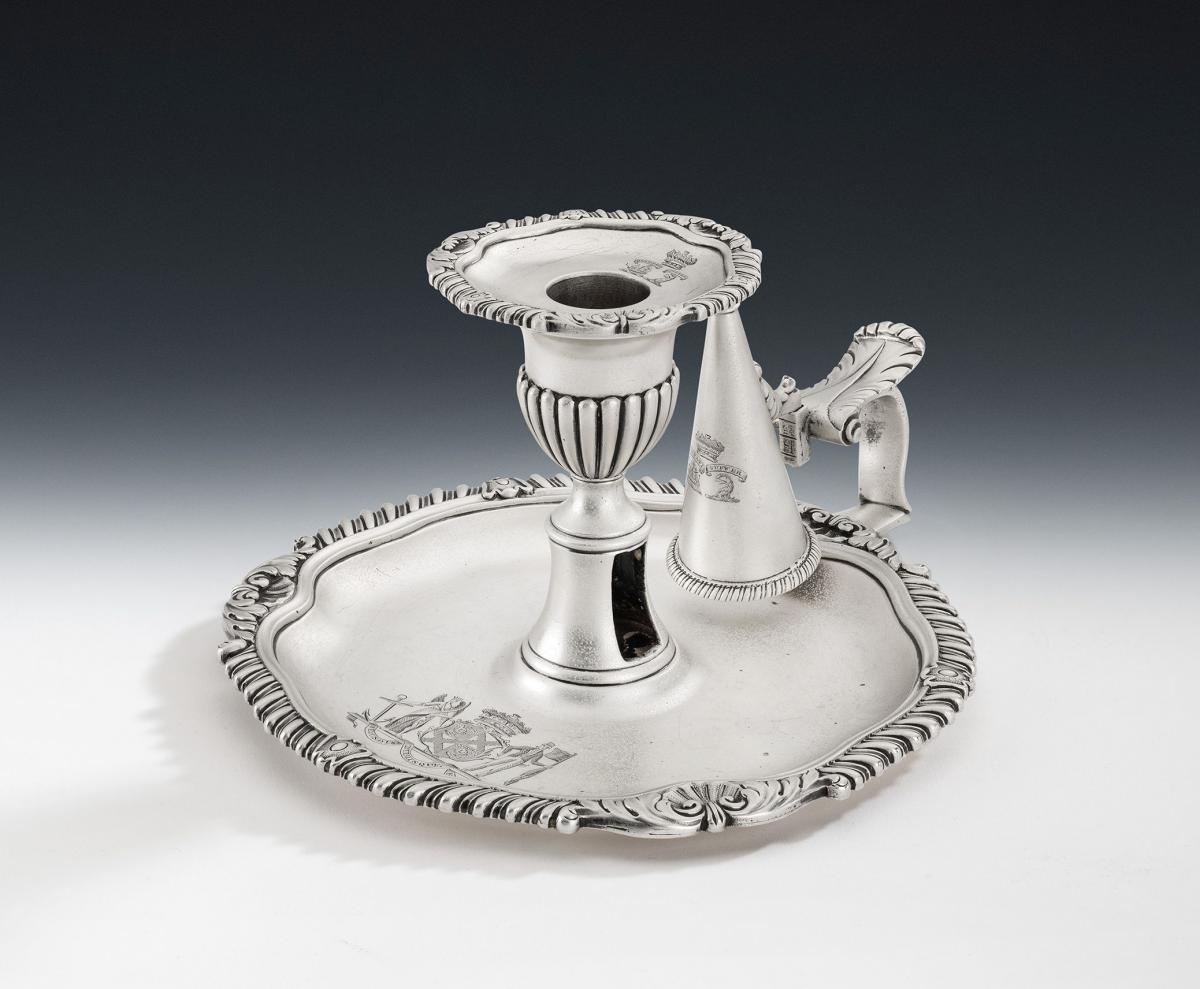 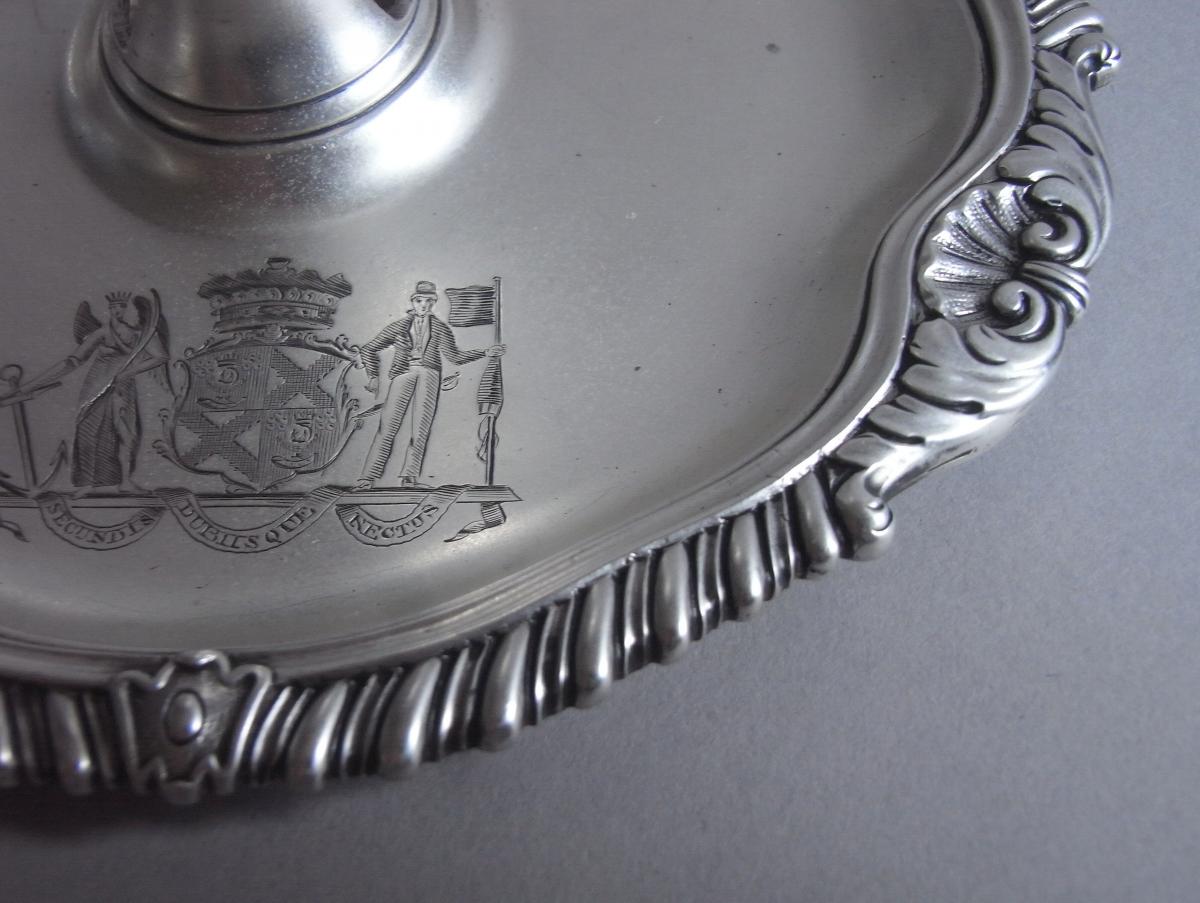 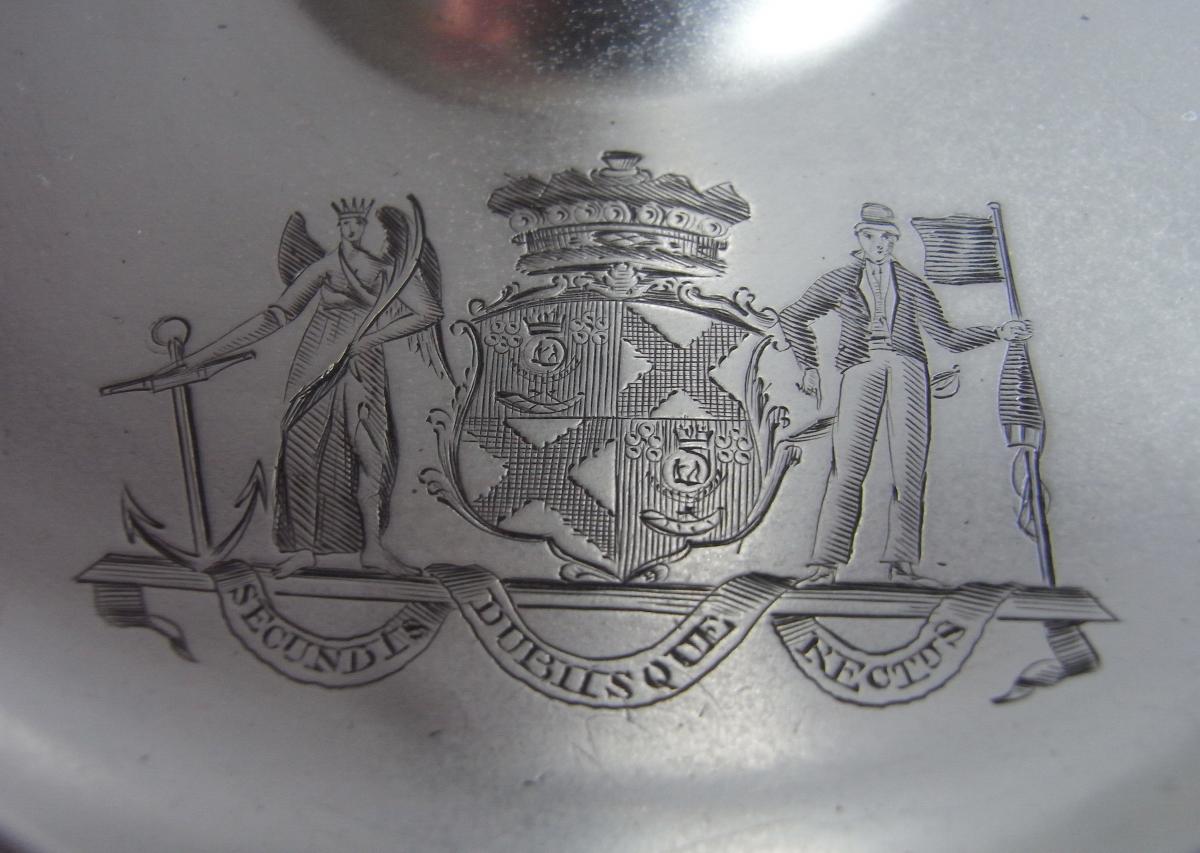 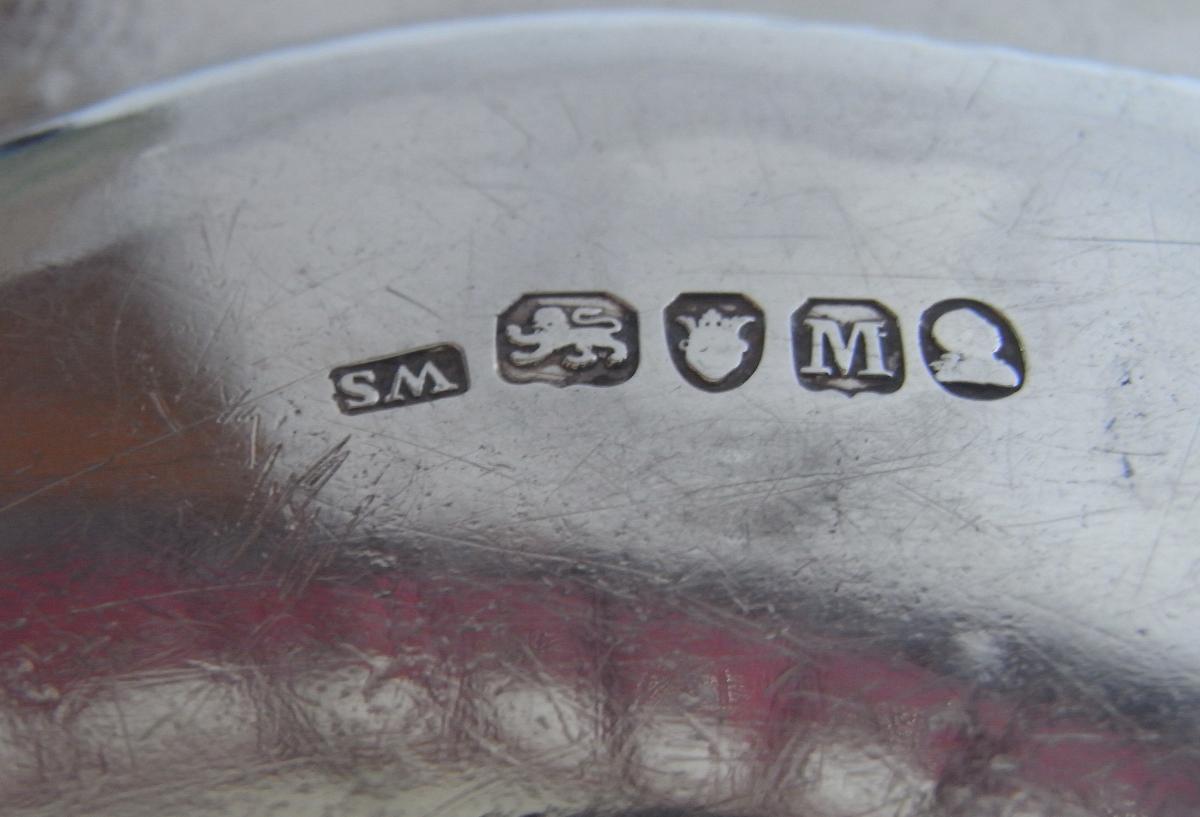 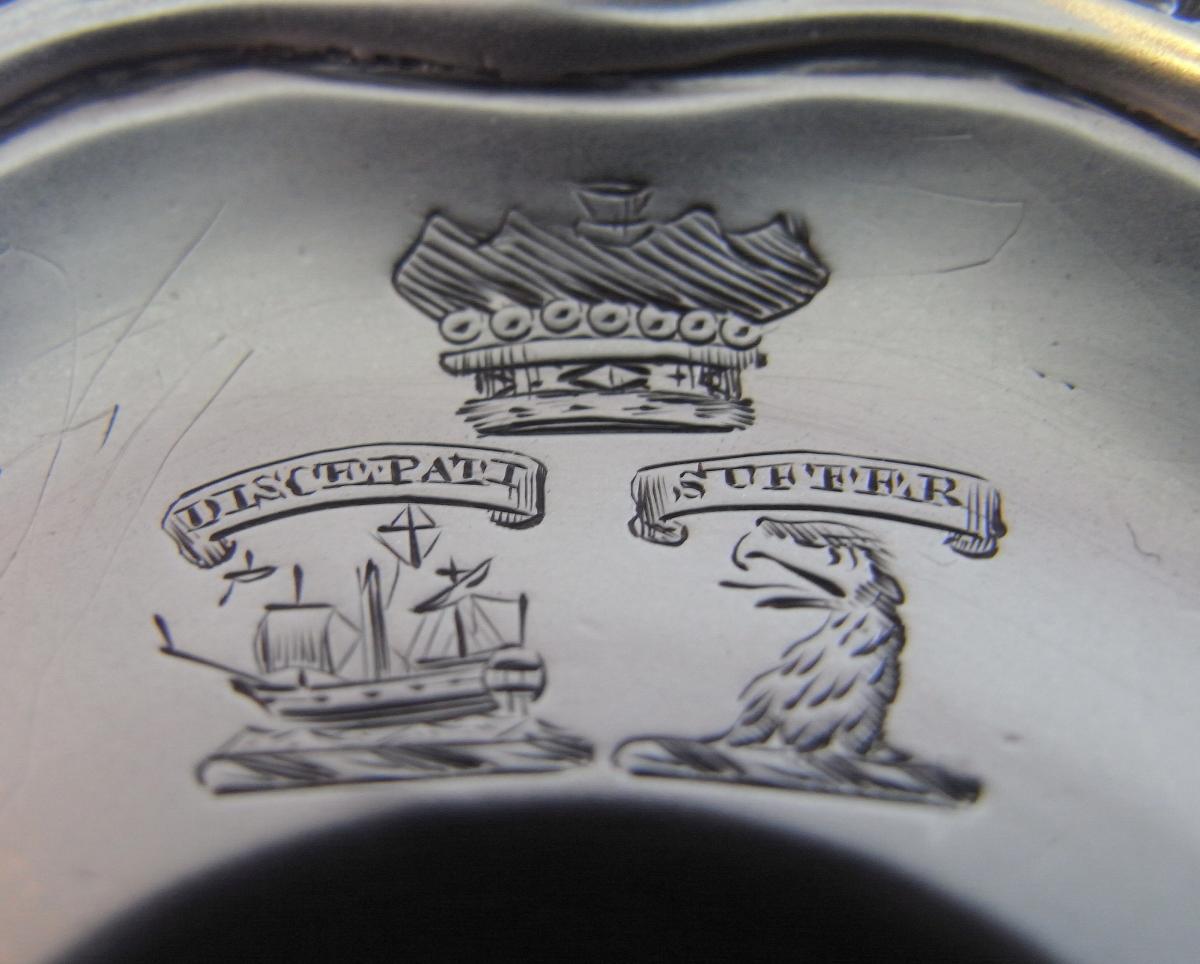 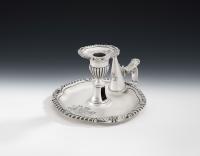 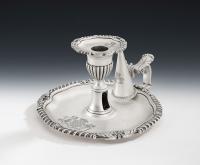 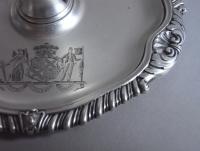 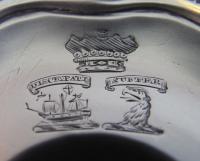 This exceptional Chamber Candlestick has a shaped circular base with raised rim decorated with gadrooning interspered with anthemions as well as raying Rococo shells, flanked by acanthus leaves.

The central shaft rises to a tulip shaped capital, decorated with lobing, and the detachable nozzle is decorated with the same border as is seen on the base.  The carrying handle is engraved with a feather edge border and displays a conical shaped extinguisher, which terminates in a bud finial.

The nozzle and extinguisher are engraved with a double contemporary Scottish Crest, with motto above, all surmounted by the coronet of a Viscount.  The base displays some of the finest engraving we have seen on a piece of silver including the Armorial, with Viscount's Coronet above and motto below, all flanked by most unusual supporters.

The weight and quality of production of this piece is quite outstanding.  William Stroud made some of the finest chambersticks in London at this date and this piece is in quite excellent condition. The Chamberstick is fully marked on the base, nozzle and extinguisher.

The Arms are those of Duncan quartering Haldane for Sir Robert Dundas, 2nd Viscount Camperdown.  He was born in 1785 and in 1805 married Jane, daughter of Sir Hugh Hamilton Dalrymple, 3rd Baronet.  In 1831 Dundas was created a Knight of the Thistle and Earl Camperdown of Lundie and Gleneagles.

This came about from his father's inheritance via the female line of the Haldane's Gleneagles estates, so he was also styled the 20th Haldane of Glenagles.  He died in 1859.

The father of the 2nd Viscount was the famous Admiral Duncan, who won the great victory of Camperdown against the French revolutionary controlled Dutch fleet in 1797.  He was thus created Viscount Camperdown and Baron Duncan and died in 1804.