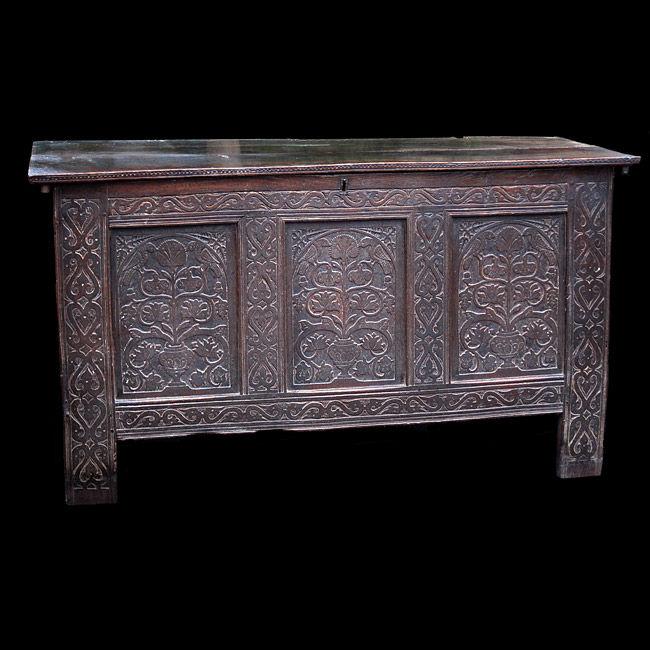 This is an important piece of furniture, an English carved Oak “Great Chest”, from East Devon, circa 1650.

It is typical both in construction and decoration of a group of Chests and Boxes that must have been made in local workshops in that area of the Devon.  Some people attribute them to the workshop of William Searle and Bill Dennis.

However there is insufficient hard evidence to support this unequivocally.  It was normal to use the Oak “in the Green” for construction at this time and the lovely Waney line of the back rail is a typical consequence of this practice.

The high price of timber resulted in a characteristic in this group of Chests whereby very spare, or thin, timber was used with the resulting splitting and cracking as the wood dried out and shrank and warped.

The decoration is instantly recognisable as from this area, with its classical urn out of which sprouts stylised Trees of Life, but this Chest is enhanced by the very rare inclusion of a pair of birds eating fruit within the Spandrels.

The leading edges have been decorated with punched motifs, which is another common feature of furniture made in this region in the middle of the seventeenth century.

This Chest would originally have been painted, and there are significant traces of a range of pigments ranging from the white background to plentiful remains of red, and lesser amounts of blue and green.

The feet have rotted at some time and have been tipped accordingly.  The warping on the back rail has broken two of the original ring hinges, and only one has been replaced with a later strap