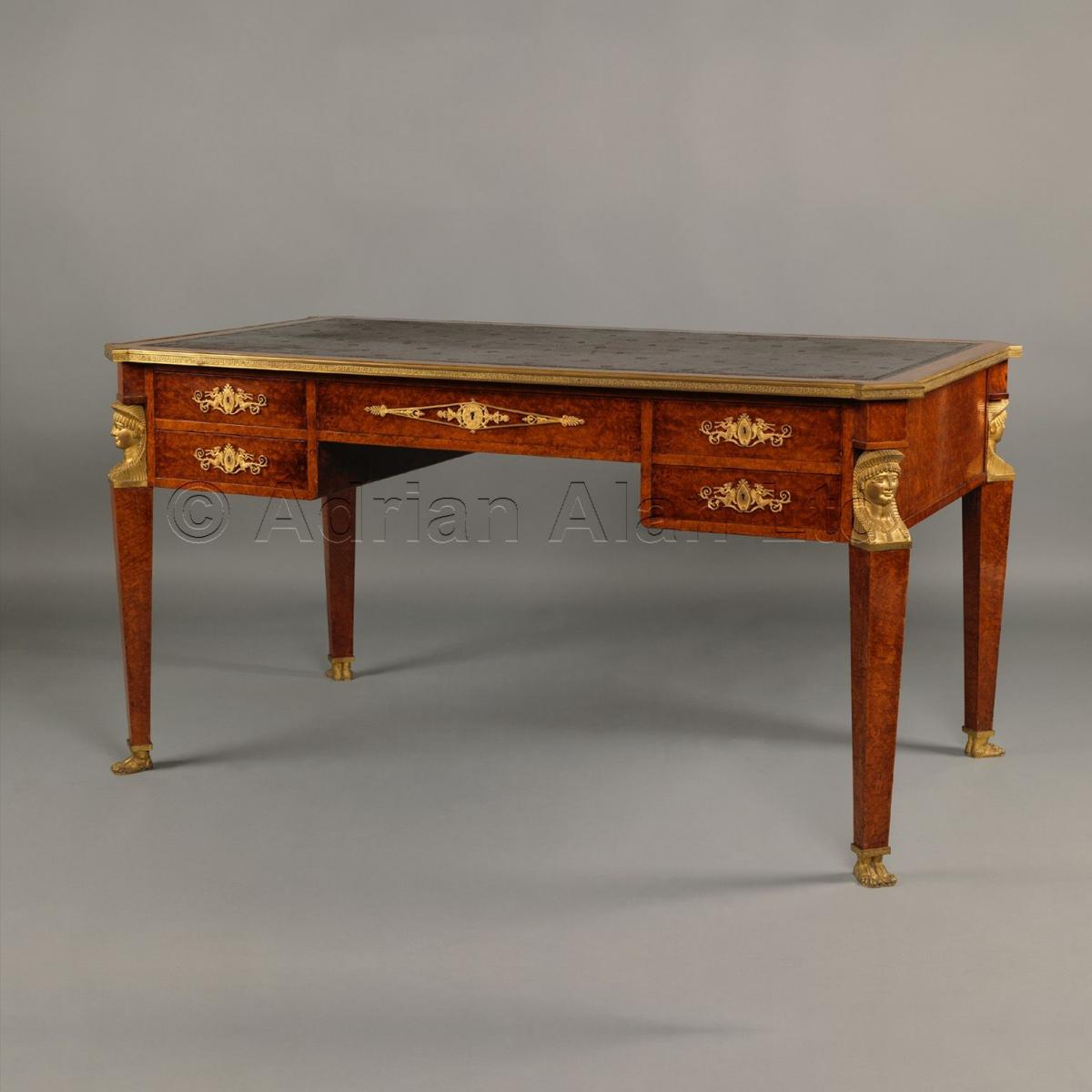 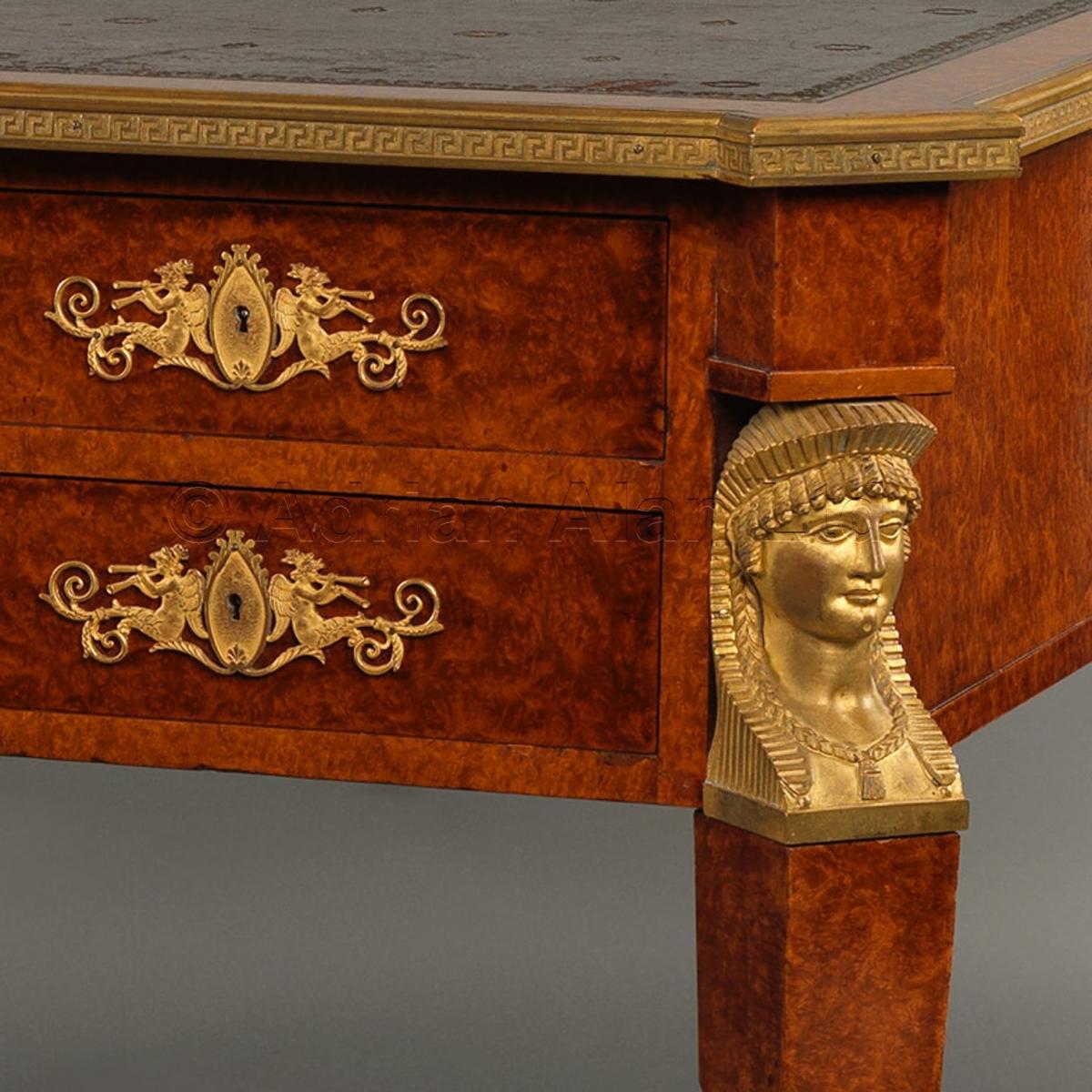 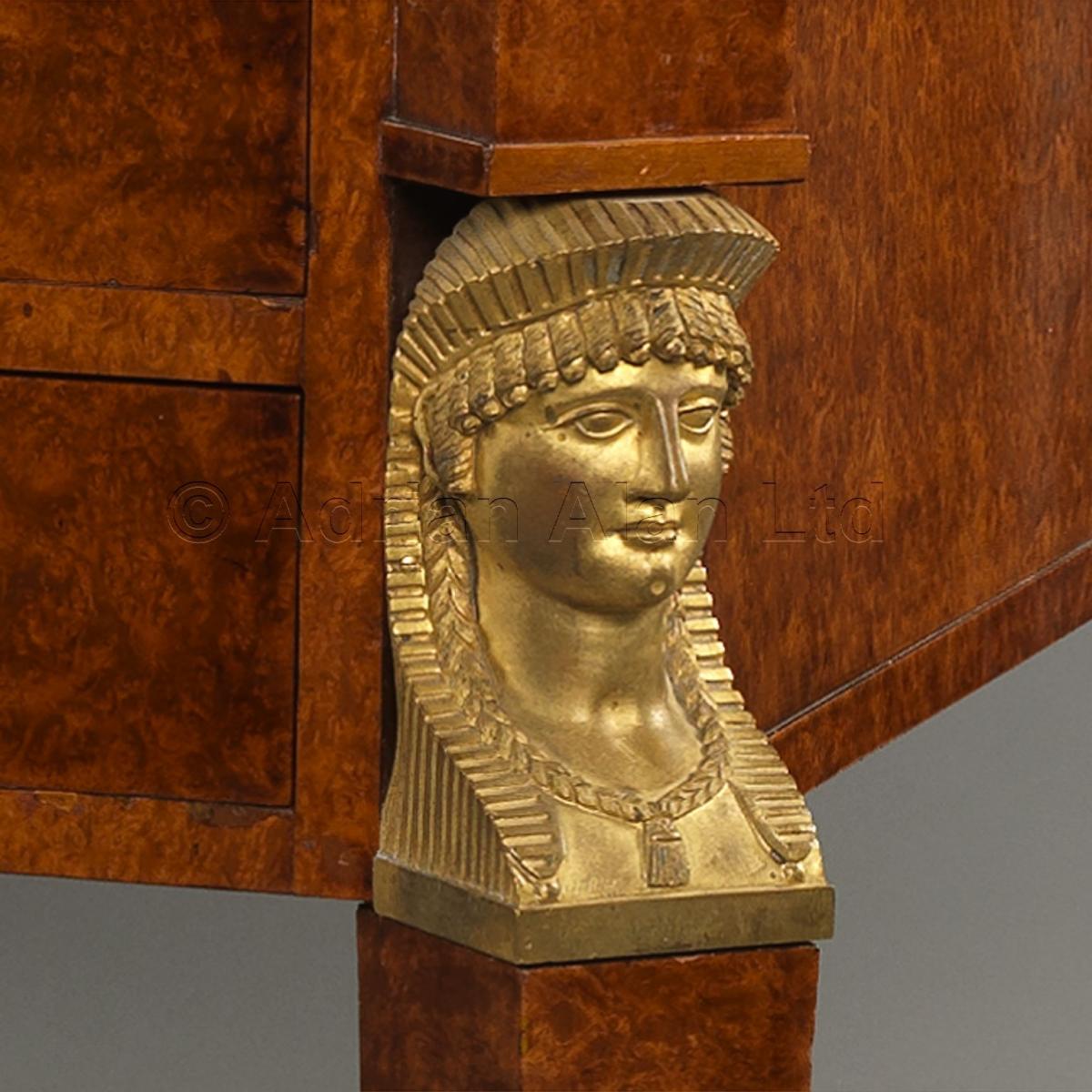 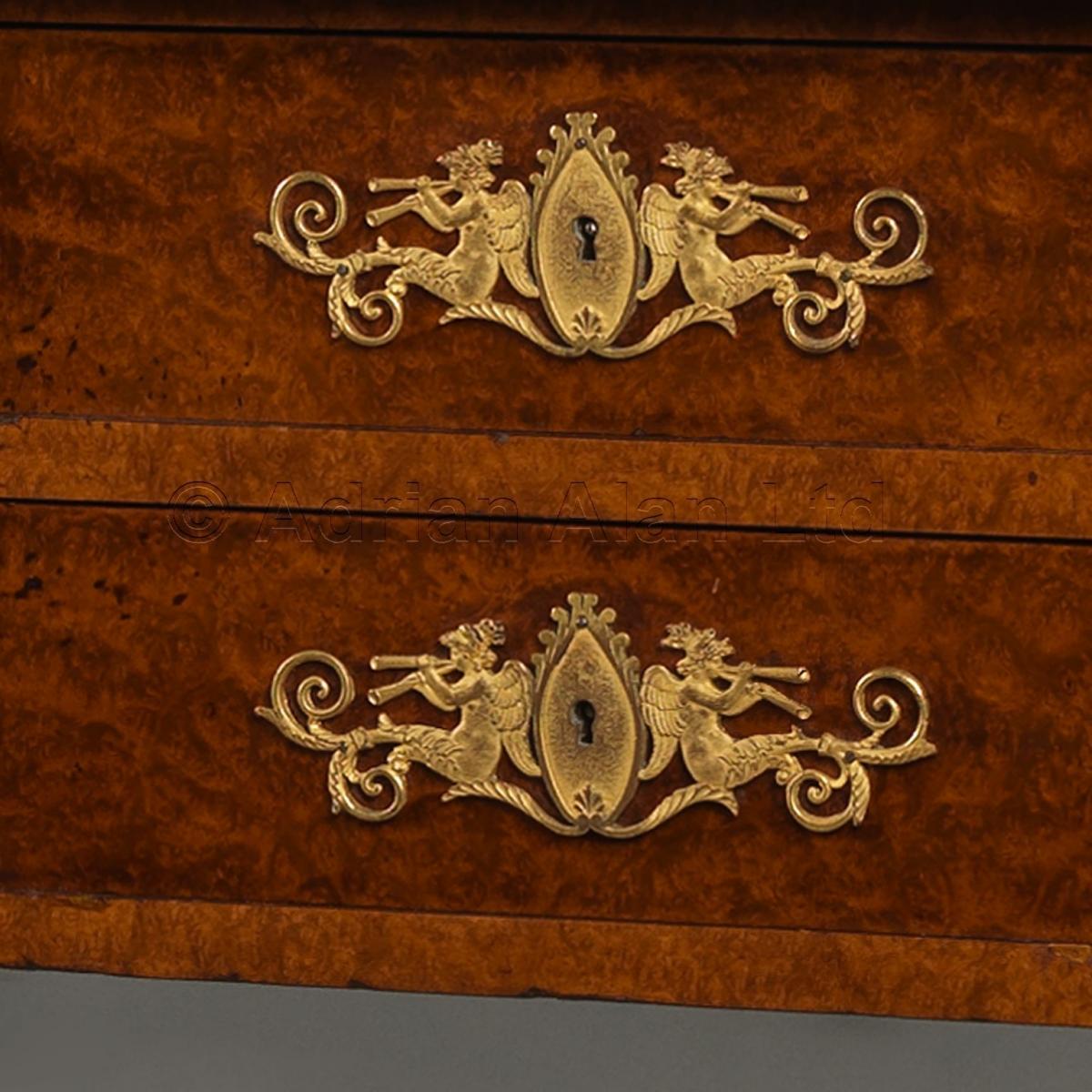 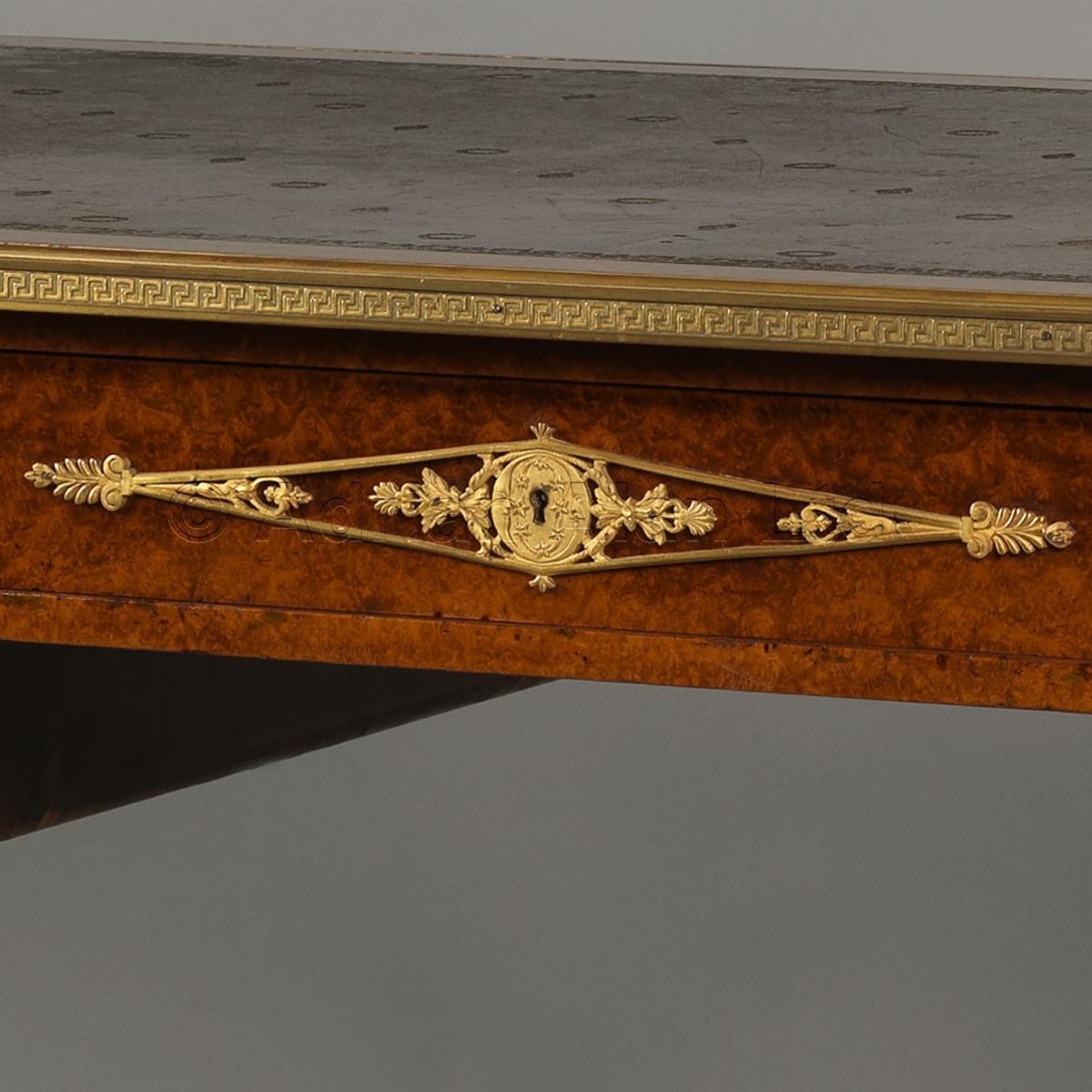 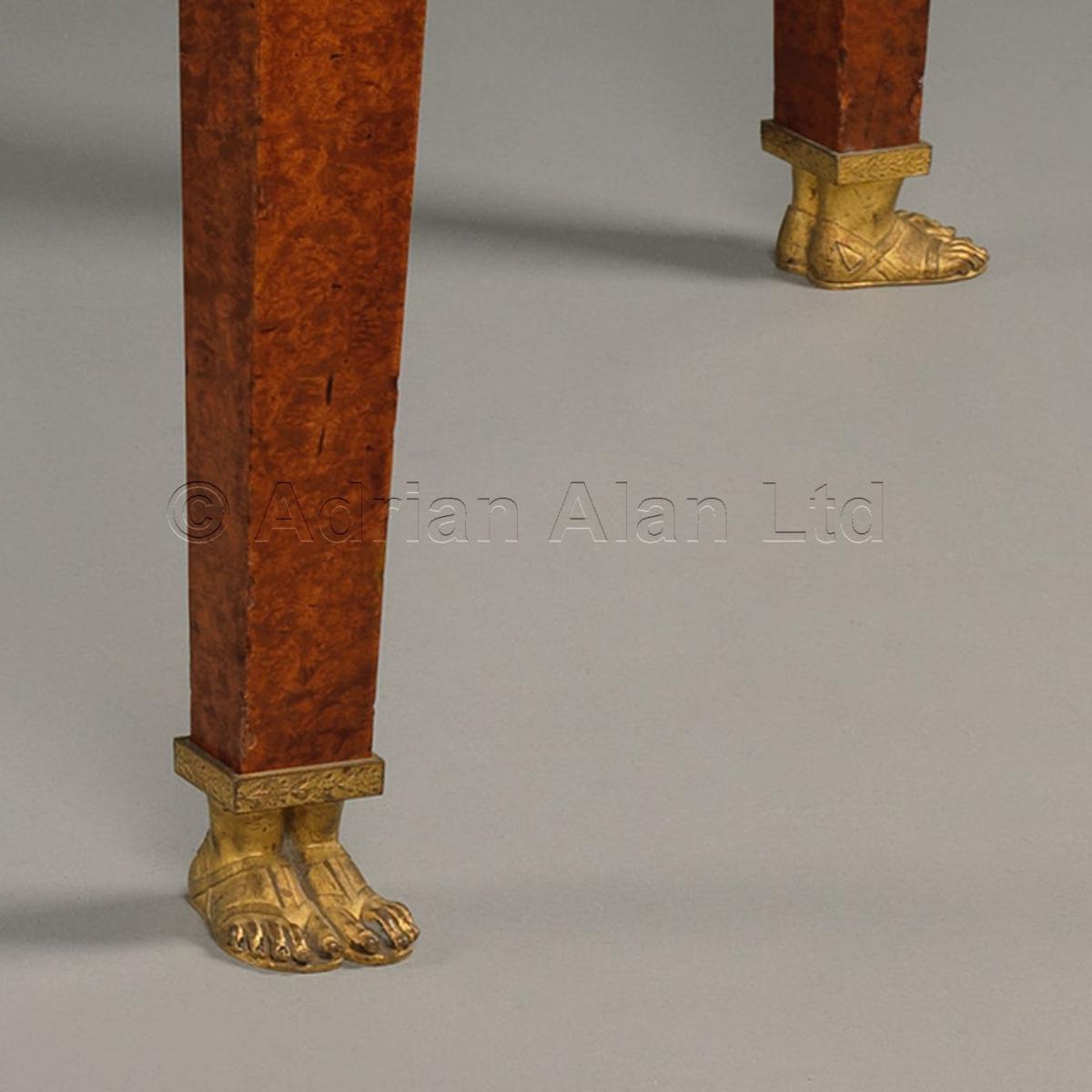 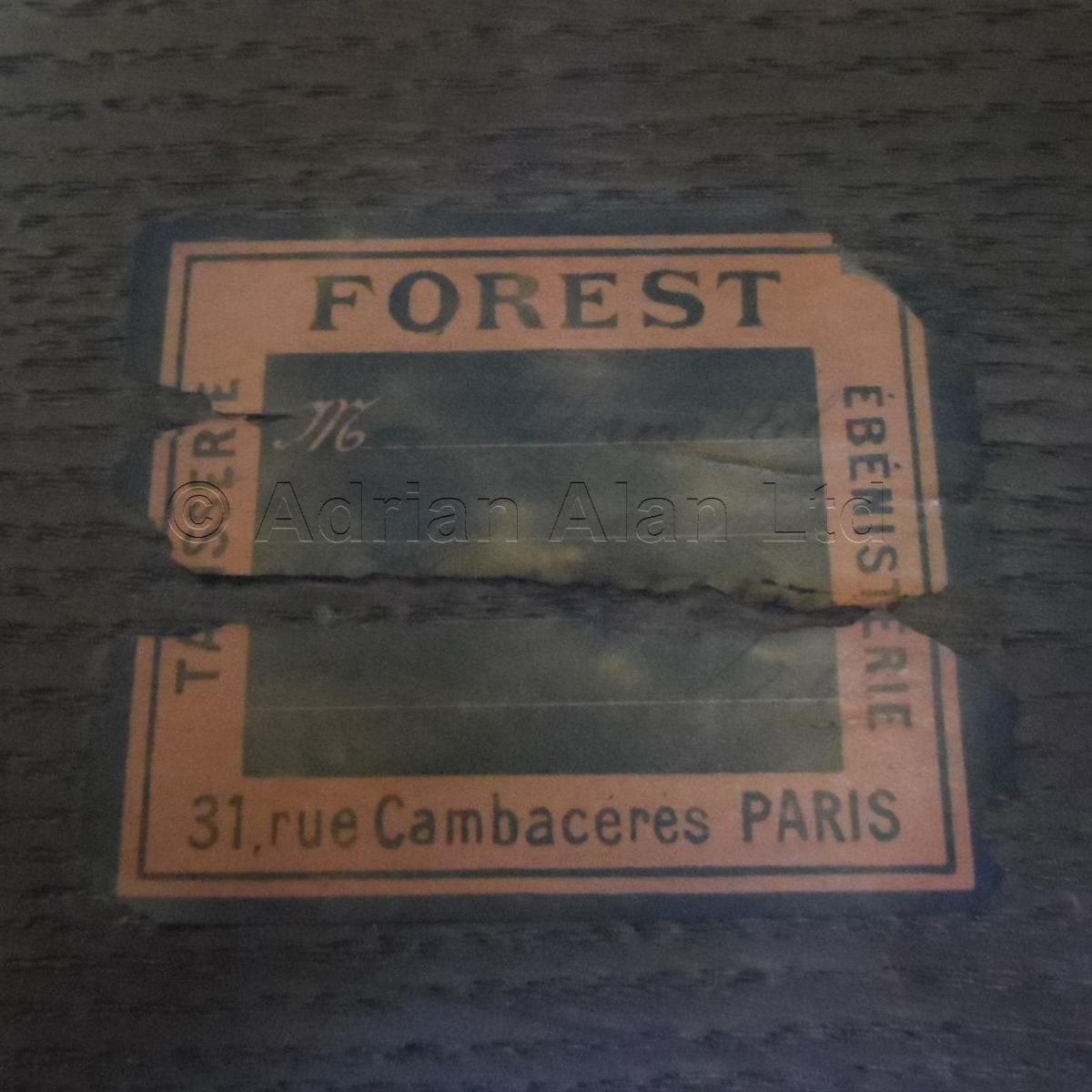 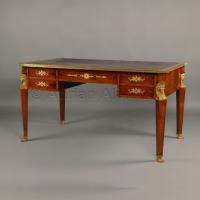 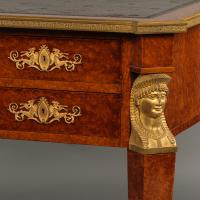 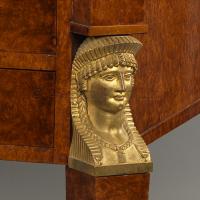 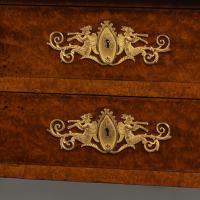 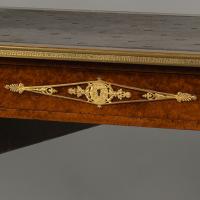 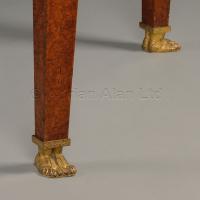 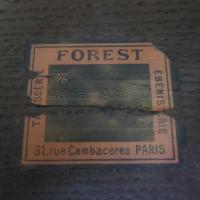 This fine burr amboyna veneered bureau plat has a gilt-tooled leather writing surface above a central long drawer, flanked to each side by two short drawers. The tapering legs are headed by exceptional cast gilt-bronze mounts in the form of Egyptian sphinx heads and terminate in delicate and exceptionally rare cast bronze human feet with sandals.

Maison Forest was established at  14 rue Pierre-Picard in 1883 and at 31 rue Cambaceres, Paris.  The furniture created by Maison Forest is notable for its high quality gilt-bronze mounts and sophisticated decoration.

In 1804 Napoléon I crowned himself Emperor of France, ending years of political instability and signalling the dawning of the Empire period.  His desire to firmly re-establish French Imperial grandeur gave rise to a distinctive vocabulary that became known as the Empire style.

The period was to see the revival of classical ideas and influences, primarily in the decorative arts. Napoleon's court was quick to adopt the classical designs discovered in the archaeological excavations of Pompeii and Herculaneum, together with exotic hieroglyphic motifs from the Egyptian campaigns. Revolutionary conquests were echoed in the use of antique forms in architecture and the decorative arts, proclaiming 'fame' and 'victory'. The use of these ancient designs and motifs, celebrated France as the heir to these great civilisations, imbuing it with the grandeur of Greece, the glory of Rome and the magnificence of the Pharaohs.

The most influential architects of the Empire style were Charles Percier (1764-1838) and Pierre-François-Léonard Fontaine (1762-1853).  Official architects to Napoleon I, their main responsibility was the renovation of the various royal residences, including Malmaison.  Their Recueil des décorations intérieures, published in 1812 became the essential handbook of the Empire style.

After the fall of Napoléon, the Empire style continued to be in favour for many decades, with only minor adaptations. The second half of the 19th century was to see a revival of the style, and the popularity of its strong but simple lines continues to the present day.