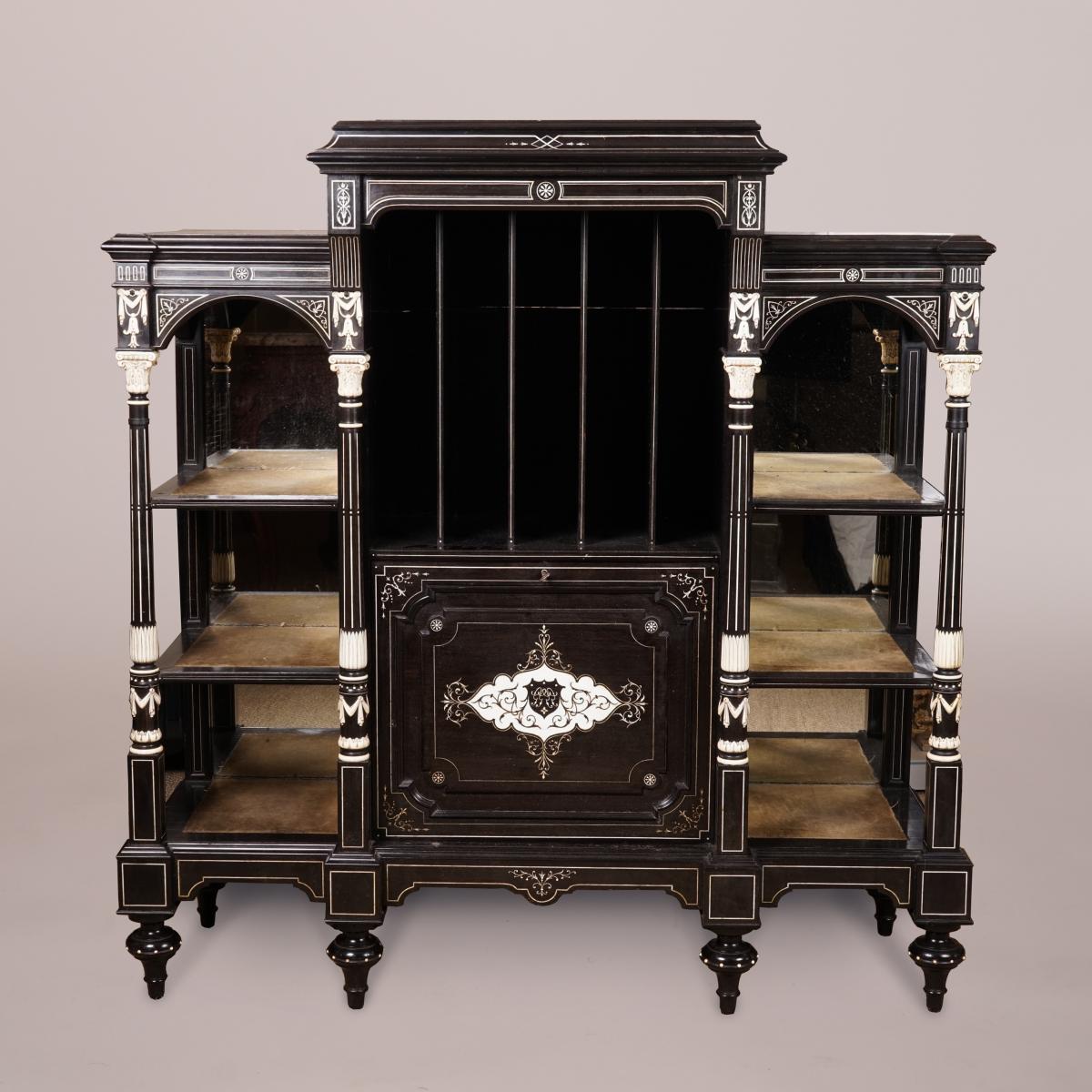 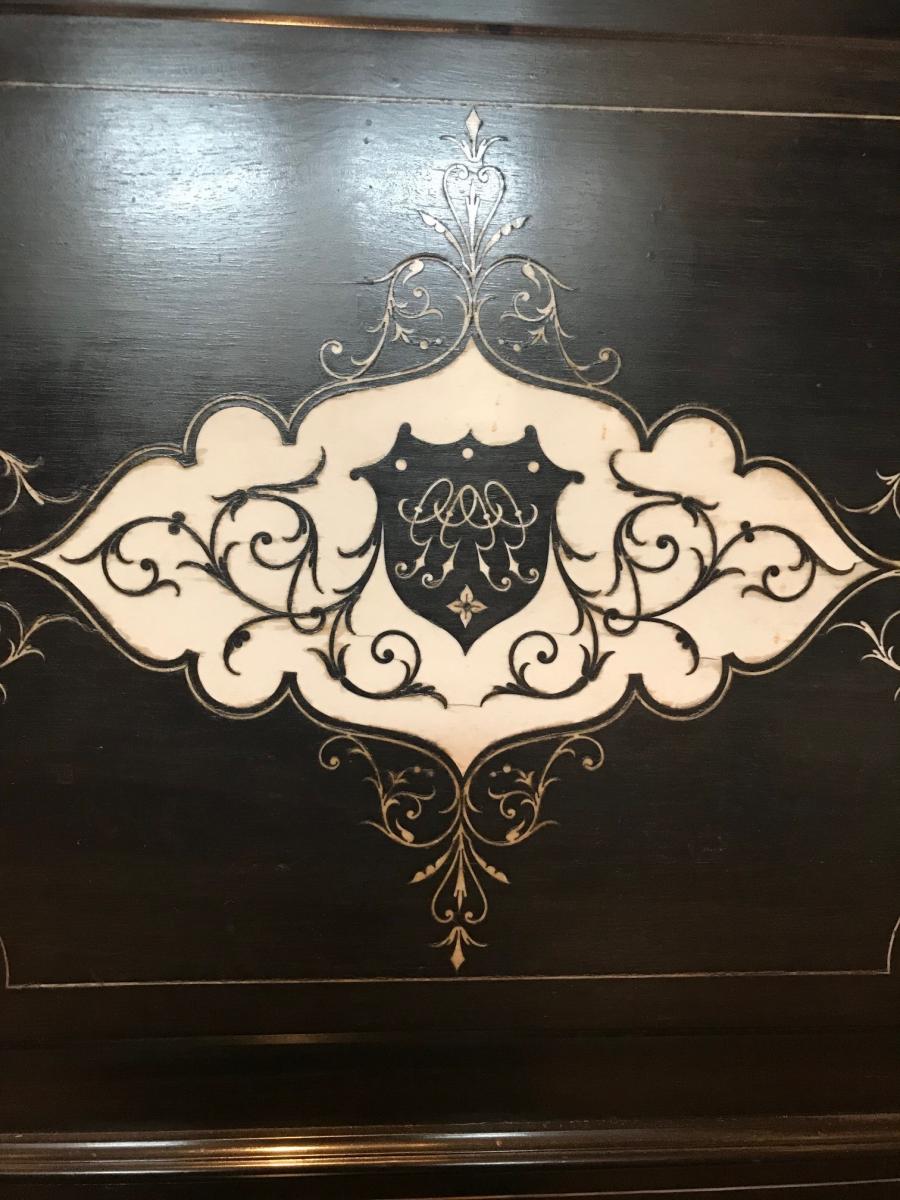 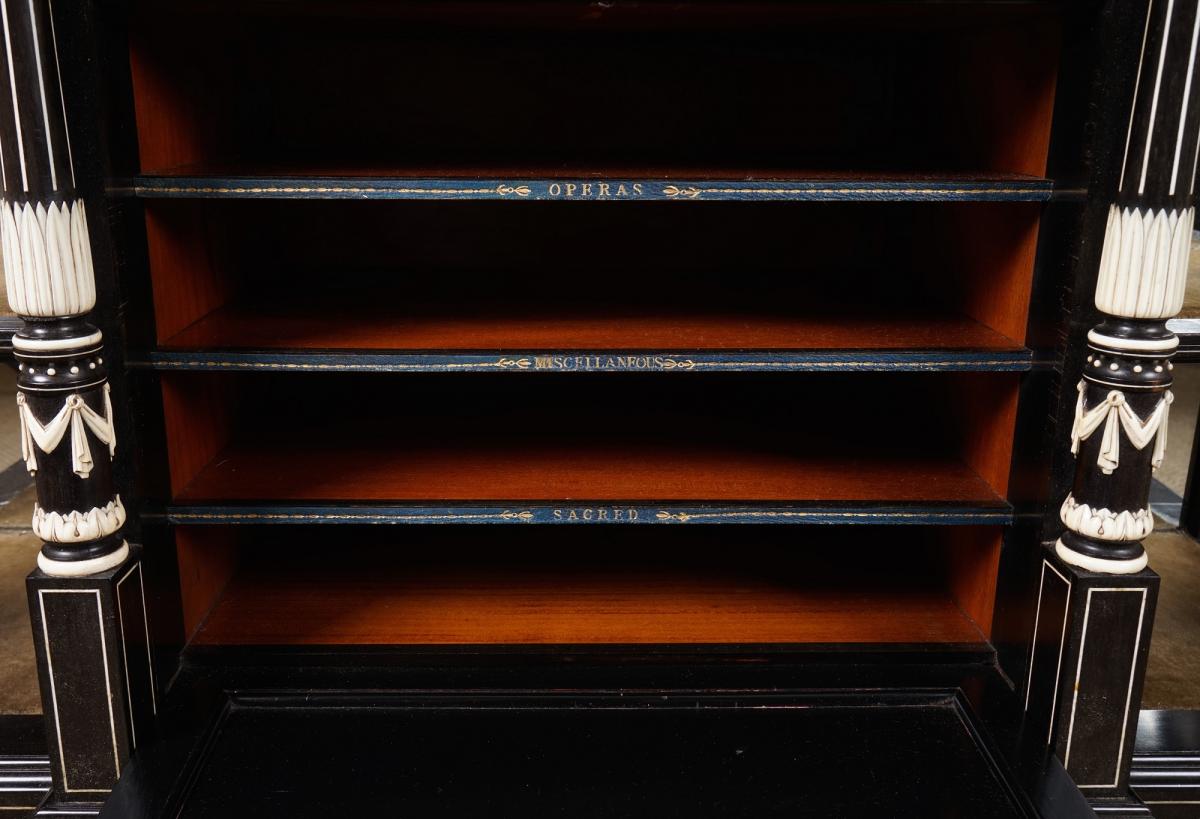 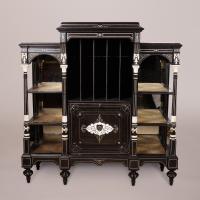 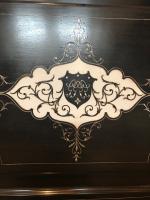 for Jackson and Graham, London

The breakfront cabinet with a raised central section with five long vertical divisions for music folios, above a fall-front with shelves for sheet music behind, the shelves with tooled leather edges for Operas, Miscellaneous, Sacred, the front of the flap ivory inlaid with a cartouche and a central monogram formed of two intertwined ‘G’s, the arched side sections each with three velvet-lined shelves with mirrors behind, the ebony column-uprights ivory inlaid and with ivory swags and capitals, the whole raised on turned ebony high feet.

Jackson and Graham were one of the leading Victorian cabinet makers of the second half of the nineteenth century and were probably the most important. Their work was of the highest quality, showcasing the most innovative designers of the day and winning many prizes at international exhibitions. Owen Jones and B.J. Talbert designed for the Paris Exhibitions of 1867 and 1878, Jones for the Vienna Exhibition of 1873. Designers at the firm included Alfred Lorimer and Eugene Prinot, Jackson and Graham also made designs by R.W. Edis, C.L. Eastlake and Talbert. Special commissions were undertaken for Queen Victoria, Napoleon III, the Grand Khedive at Cairo and the Royal Palace in Siam.

Owen Jones was highly influential in  his promotion of formal, stylised pattern, in direct opposition to the popular taste for the flamboyantly naturalistic. Jones also designed entire interiors for important clients, including the connoisseur Alfred Morrison, both at Fonthill and Carlton House Terrace. Amongst Jones’s designs for Fonthill was a well documented semi-circular display cabinet in ebony inlaid with ivory for the display of Morrison’s collection of Chinese porcelain. The lower door panels of the cabinet all incorporate Morrison’s initials in a central ivory inlaid monogram.

Jones was also responsible for the decoration and furnishings at The Priory, 21 North Bank, Regent’s Park in 1863 for the novelist George Eliot and her partner G.H. Lewes. The ivory inlaid monogram incorporating two ‘G’s to the panel of the present music cabinet bears distinct similarities to the monogram inlaid panels of the display cabinet at Fonthill. It is tempting to speculate that Owen Jones may have designed the present cabinet for George Eliot and G.H.Lewes as part of the new decorative scheme for The Priory, incorporating their first initials in the monogram.

George Eliot was known to have a particular love of music, in a letter to Madame Bodichon of 4th December 1863 she writes, ‘ I am rather ashamed to hear of anyone trying to be useful just now, for I am doing nothing but indulging myself – enjoying being petted very much, enjoying great books, enjoying our new, pretty, quiet home,and the study of Beethoven’s sonatas for piano and violin, … ‘

The presence of a piano in the drawing room designed by Jones at The Priory is confirmed by an entry by George Lewes in his journal of 13th November 1863,‘ Besides the trouble and vexation incident to moving we have had extra annoyances.  The (piano) tuner was sick over our elegant drawing room paper, which Owen Jones had designed, and over the carpet! This obliges us to have fresh paper made as there are no remnants of the old, and it was originally made for us. ‘