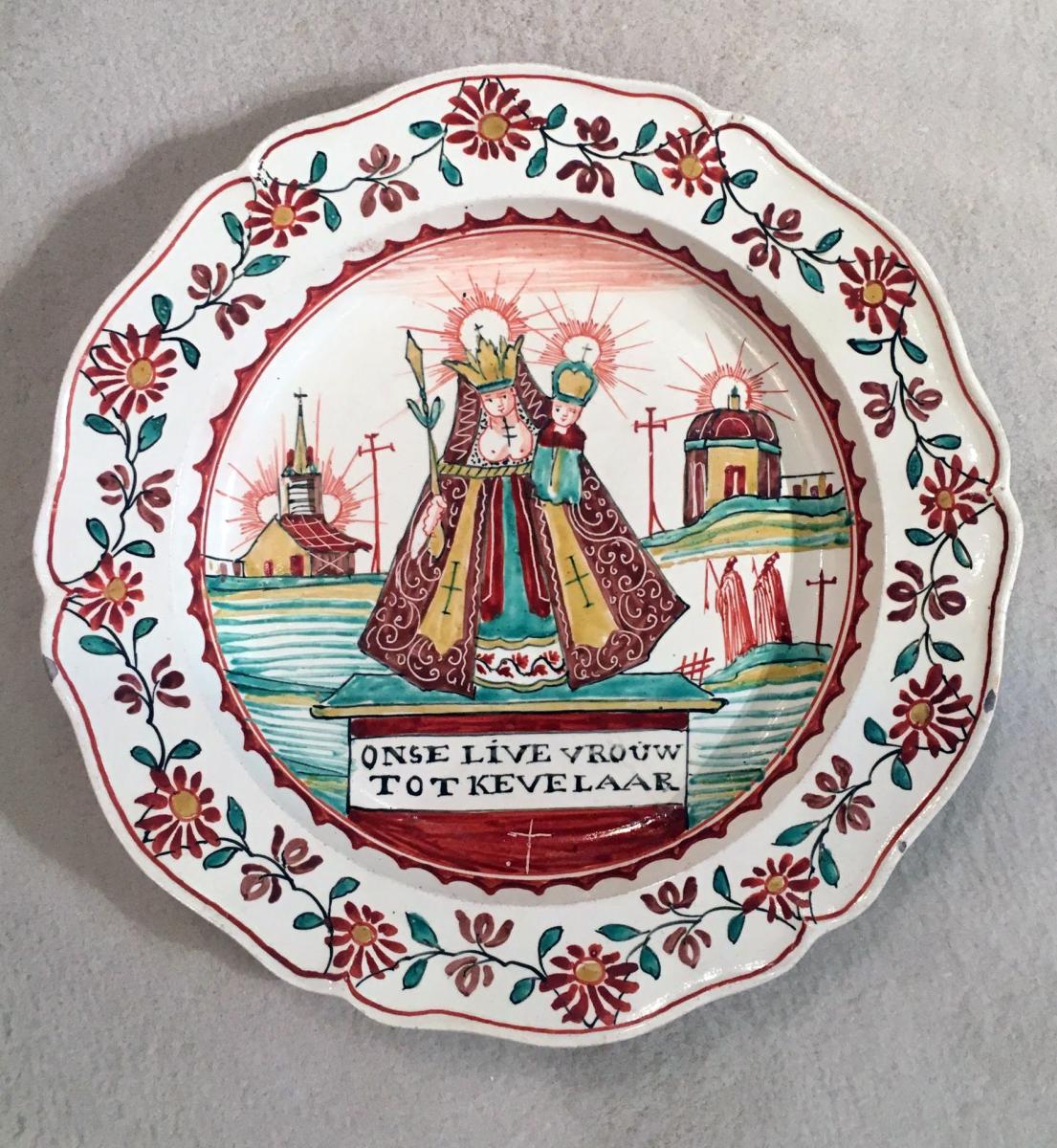 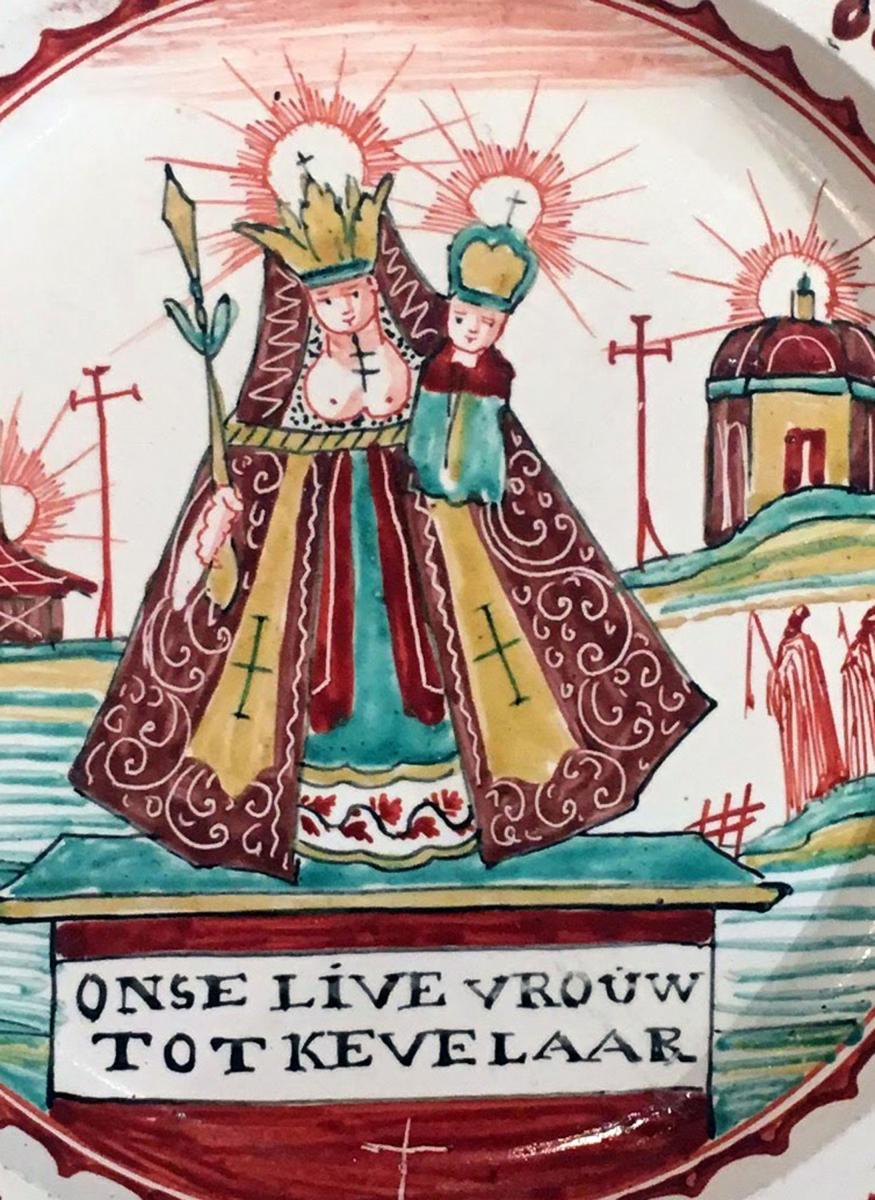 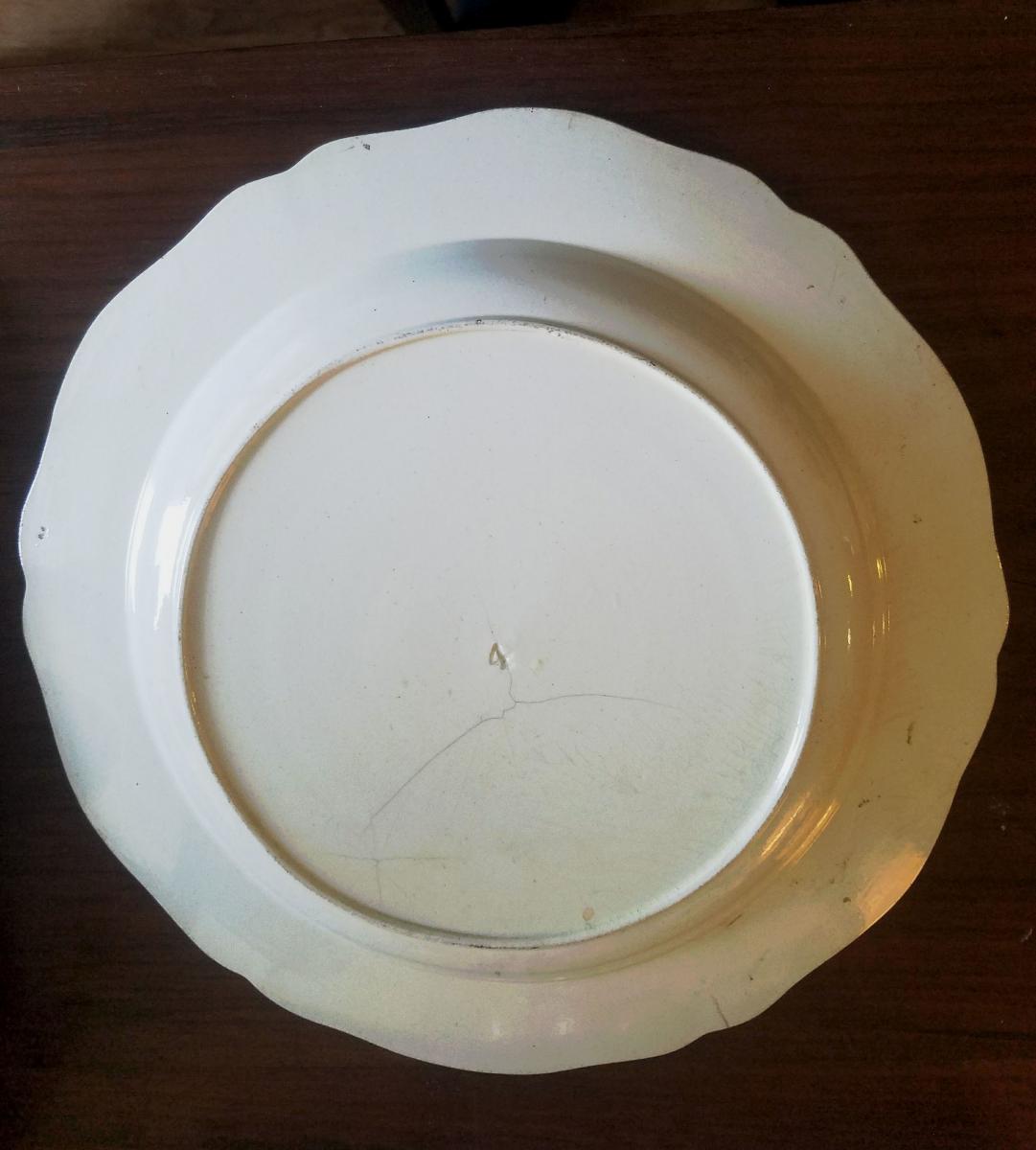 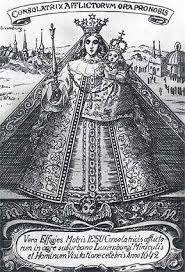 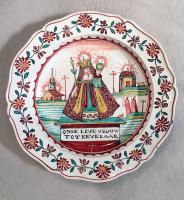 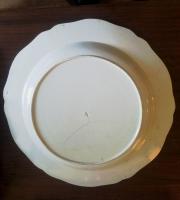 A shaped creamware deep plate decorated in Holland with an image of the Virgin Mary and Jesus with a halo surrounding their heads.  The Virgin wears an ornate robe and holds a staff in her right hand.  Chapels and a cross can be seen to either side.  Below the figures is a panel reading Onse Live Vrouw Tot Kevelaar (Our Lady to Kevelaar).

Painting in excellent condition with bright strong colours.  There is a star-crack to the reverse which does not come through to the front.

Interestingly, the Virgin Mary is shown with bare breast.  In Margaret Miless book A Complex Delight: The Secularization of the Breast, 1350-1750, the author traces the disappearance of depictions of Mary breastfeeding after the Renaissance.

Miles notes that before the Renaissance, the lactating virgin was the primary symbol of Gods love for humanity. To show Mary breastfeeding Christ was to display Christs humility and love for humanity by himself becoming fully human  so human that he was literally kept alive by the milk of his mothers breast.

The breastfeeding Mary, or Maria Lactans, surfaced early in the Christian tradition, as evidenced by an image of Mary suckling Jesus in a 3rd-century fresco in Rome. The motif became increasingly popular in the Middle Ages and appeared in shrines and paintings as a symbol not only of Christs humility in taking on flesh, but as a reminder of the holy comfort offered to those who followed him.

But as Renaissance ideas and technologies blossomed, the Maria Lactans all but disappeared.
(https://www.washingtonpost.com/news/acts-of-faith/wp/2015/05/28/how-images-of-mary-mother-of-jesus-have-long-shown-breast-is-best/?utm_term=.87e2e3e1cc77)

Kevelaer is a municipality in the district of Kleve, in North Rhine-Westphalia in Germany. It is the largest Catholic pilgrimage location within north-western Europe. More than 1 million pilgrims, mostly from Germany and the Netherlands, visit Kevelaer every year to honour the Virgin Mary. The population in 2015 was 28,311.

History
Kevelaer is a center of veneration and pilgrimage to Our Lady, Comforter of the Afflicted (also known as Our Lady of Consolation. According to tradition, a merchant praying in front of a cross in a field heard a voice that told him: "Here thou shalt build me a chapel." His wife dreamt of a little chapel with a Madonna that someone had previously advised her to purchase,

In 1642 a copperplate engraving, representing Our Lady of Luxembourg, was installed in a sanctuary erected the same year. It is one of the best visited Catholic pilgrimage locations in north-western Europe. The Gnadenkapelle [Chapel of Grace] has drawn pilgrims to the Lower Rhine Region from all over the world for more than 360 years. Pope John Paul II visited in 1987.