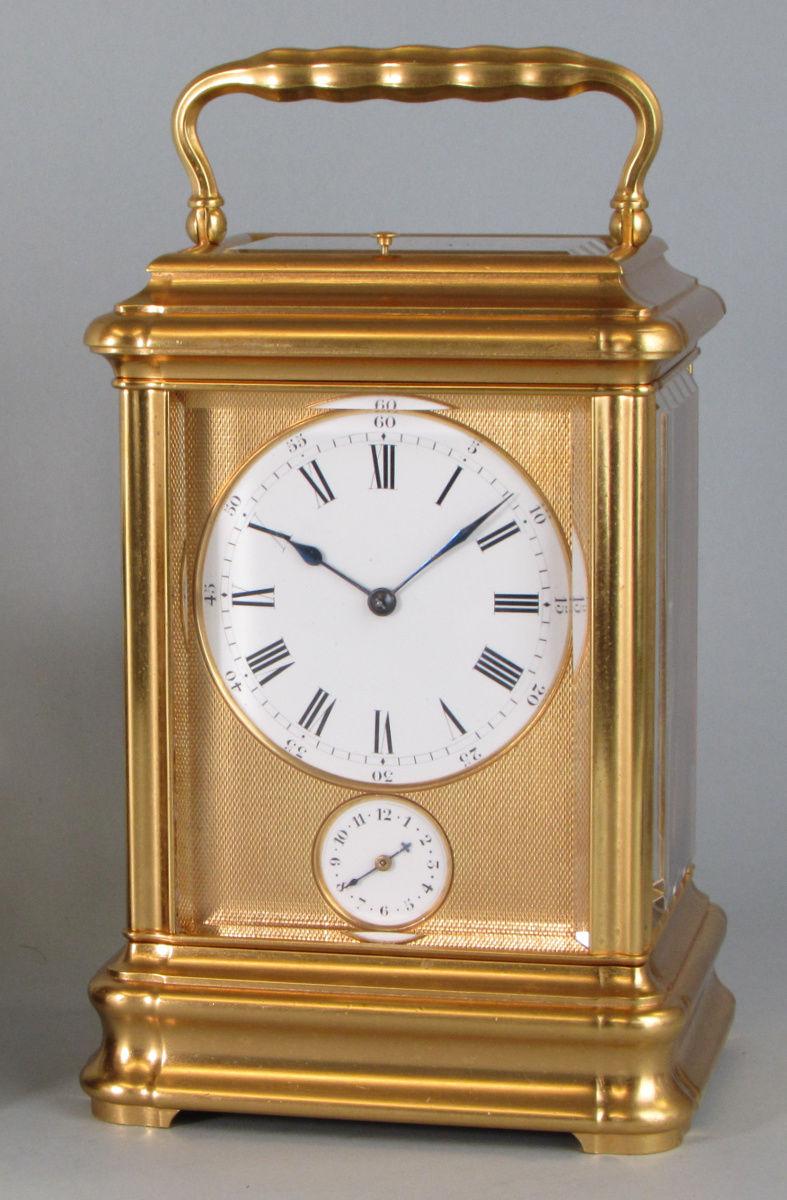 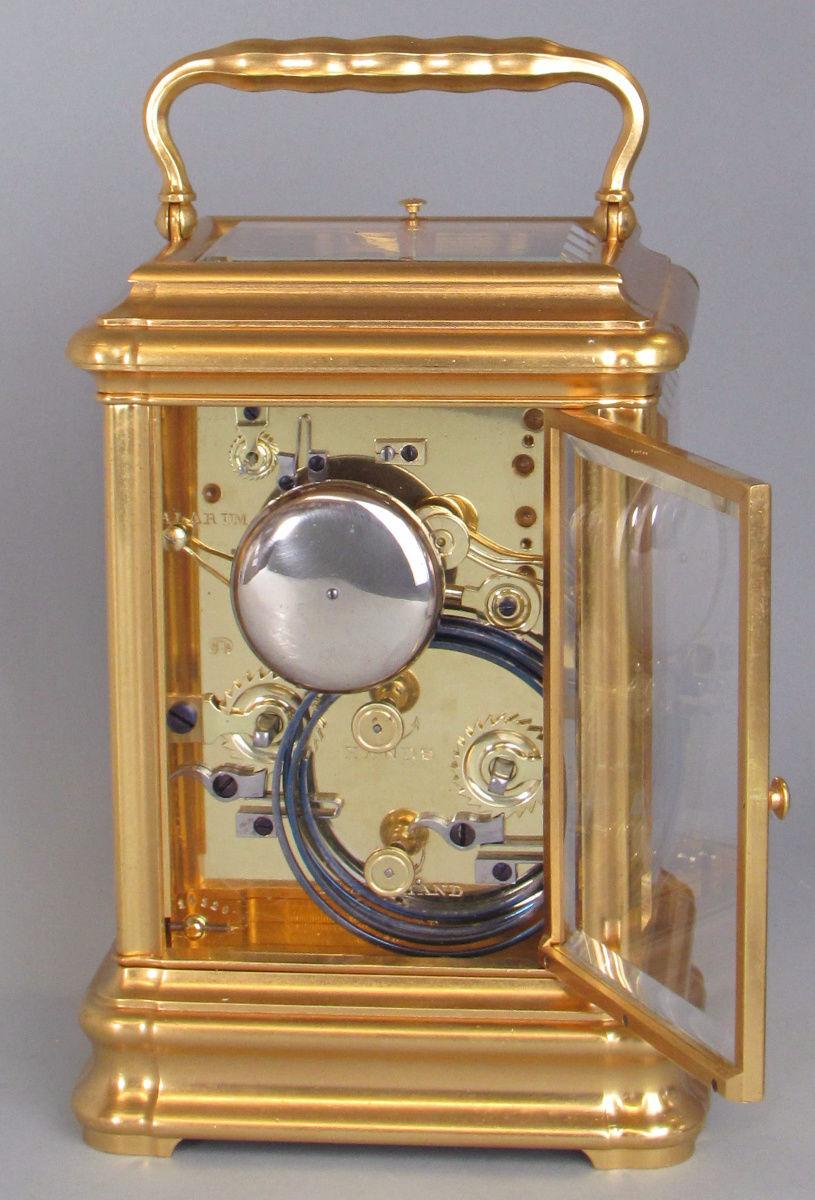 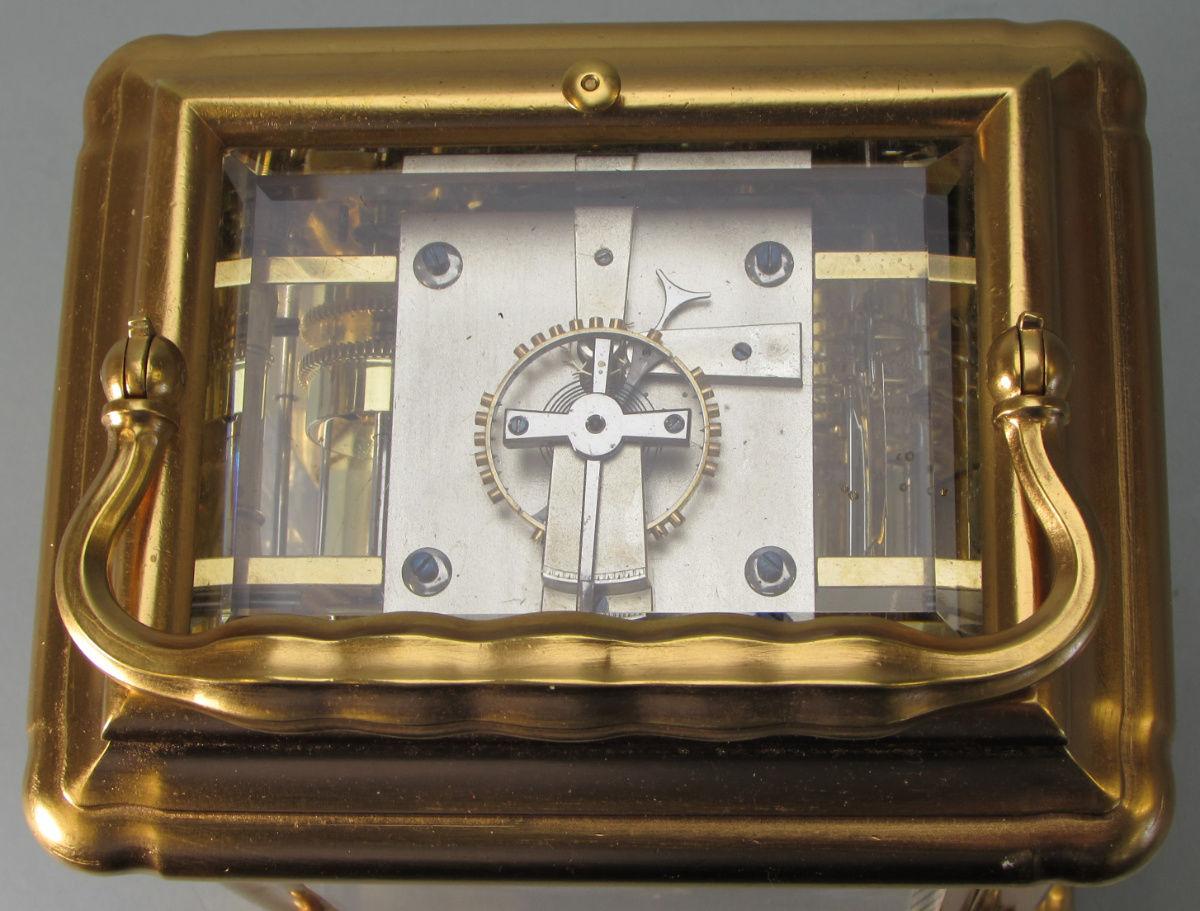 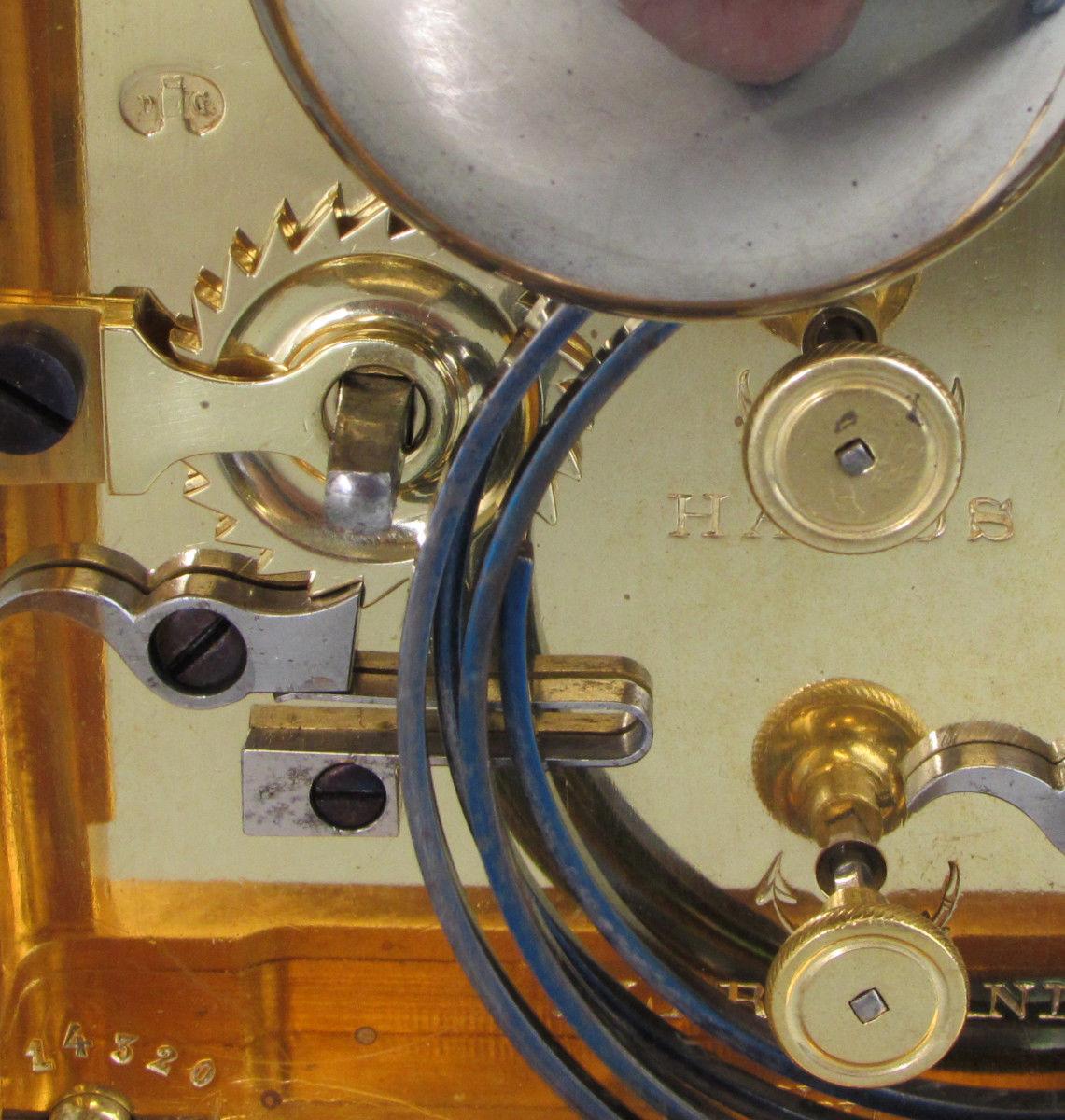 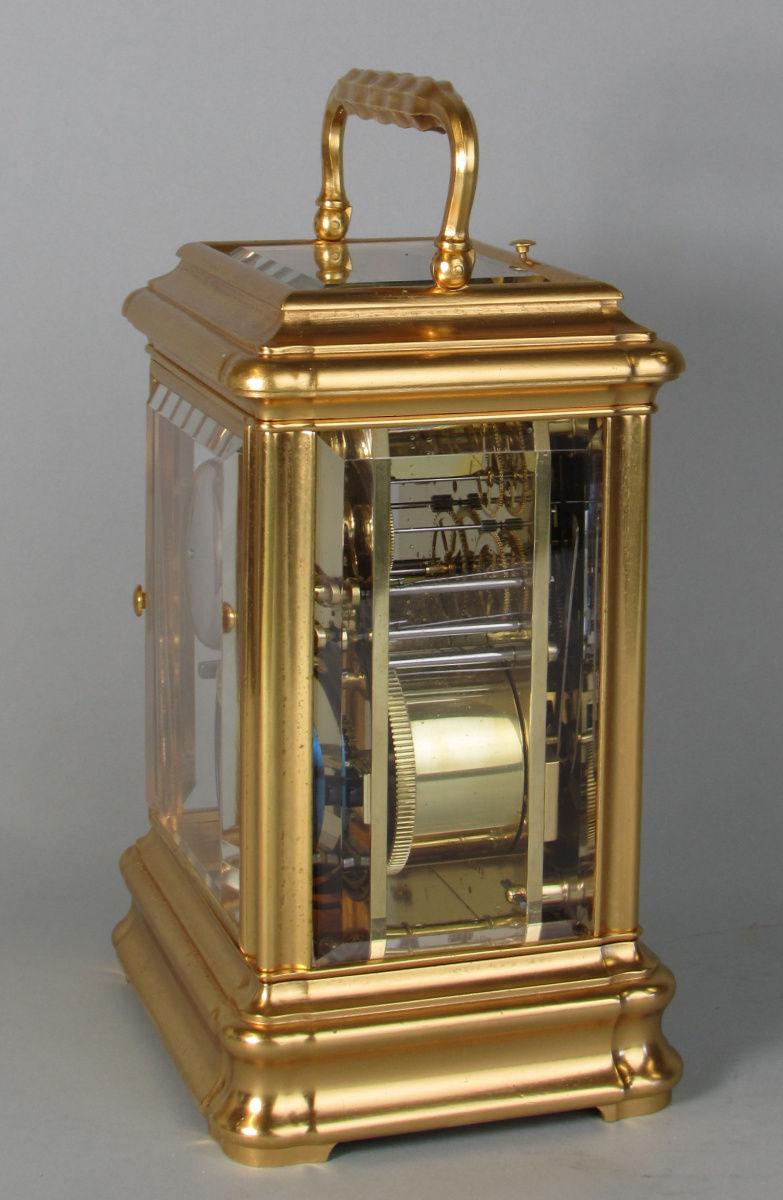 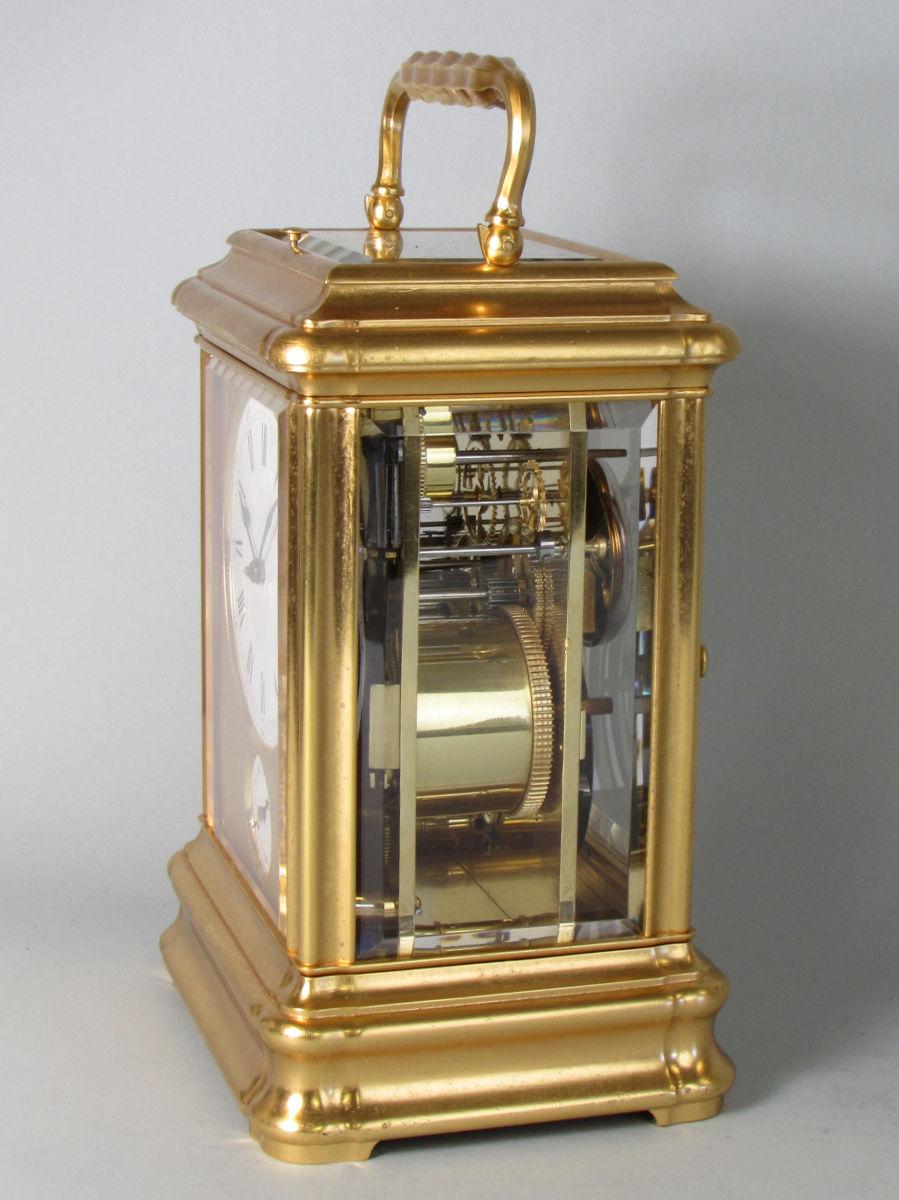 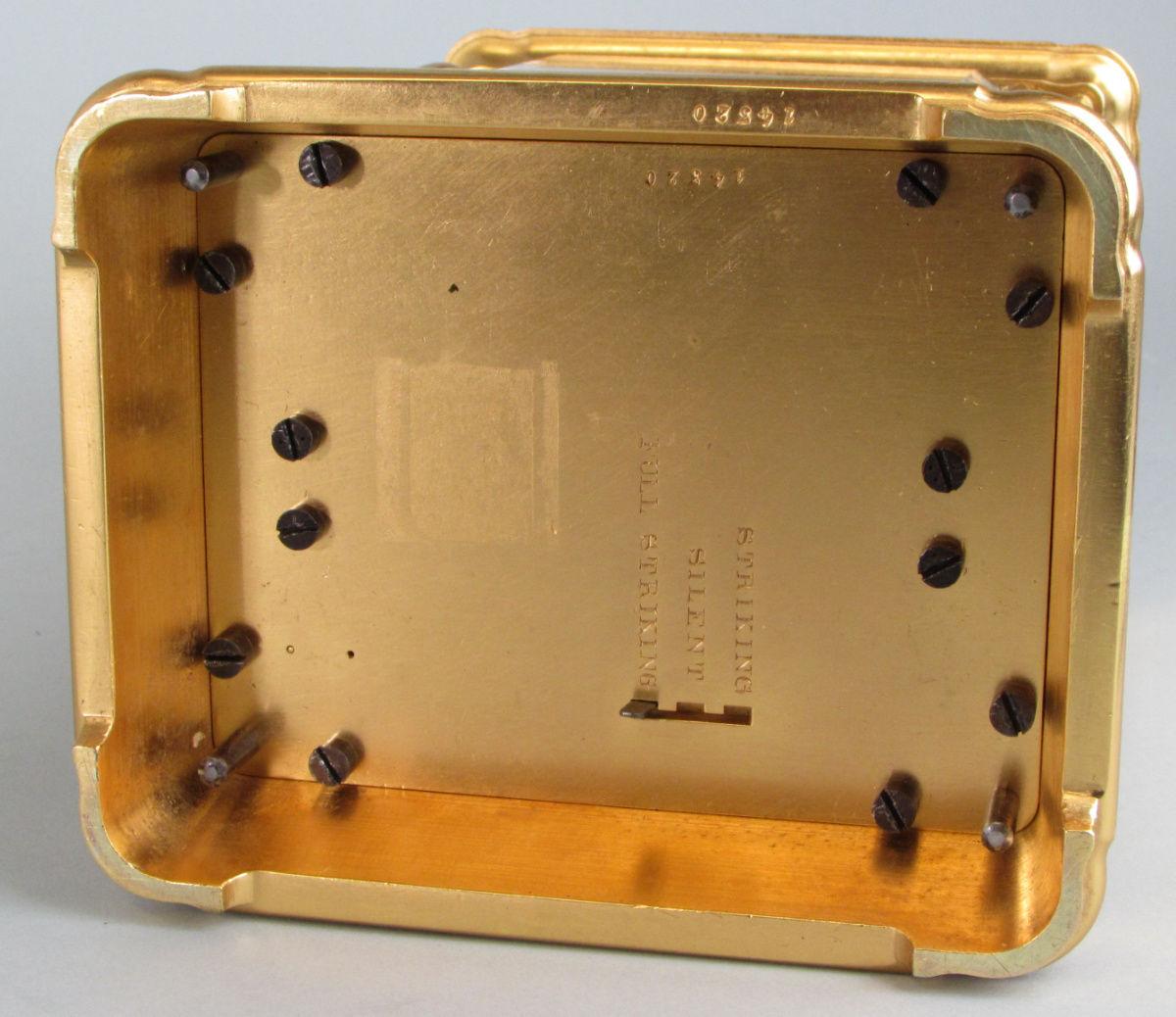 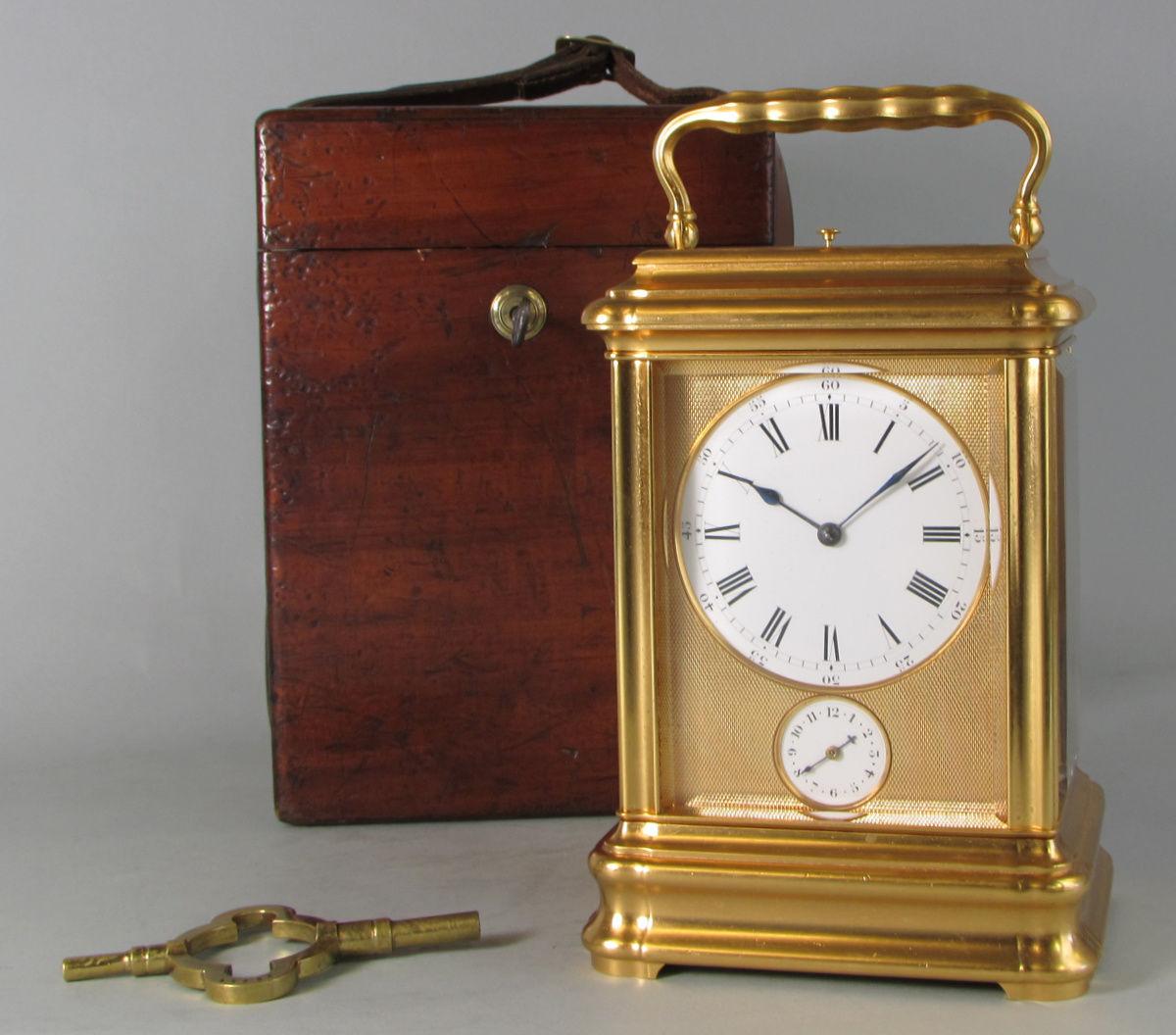 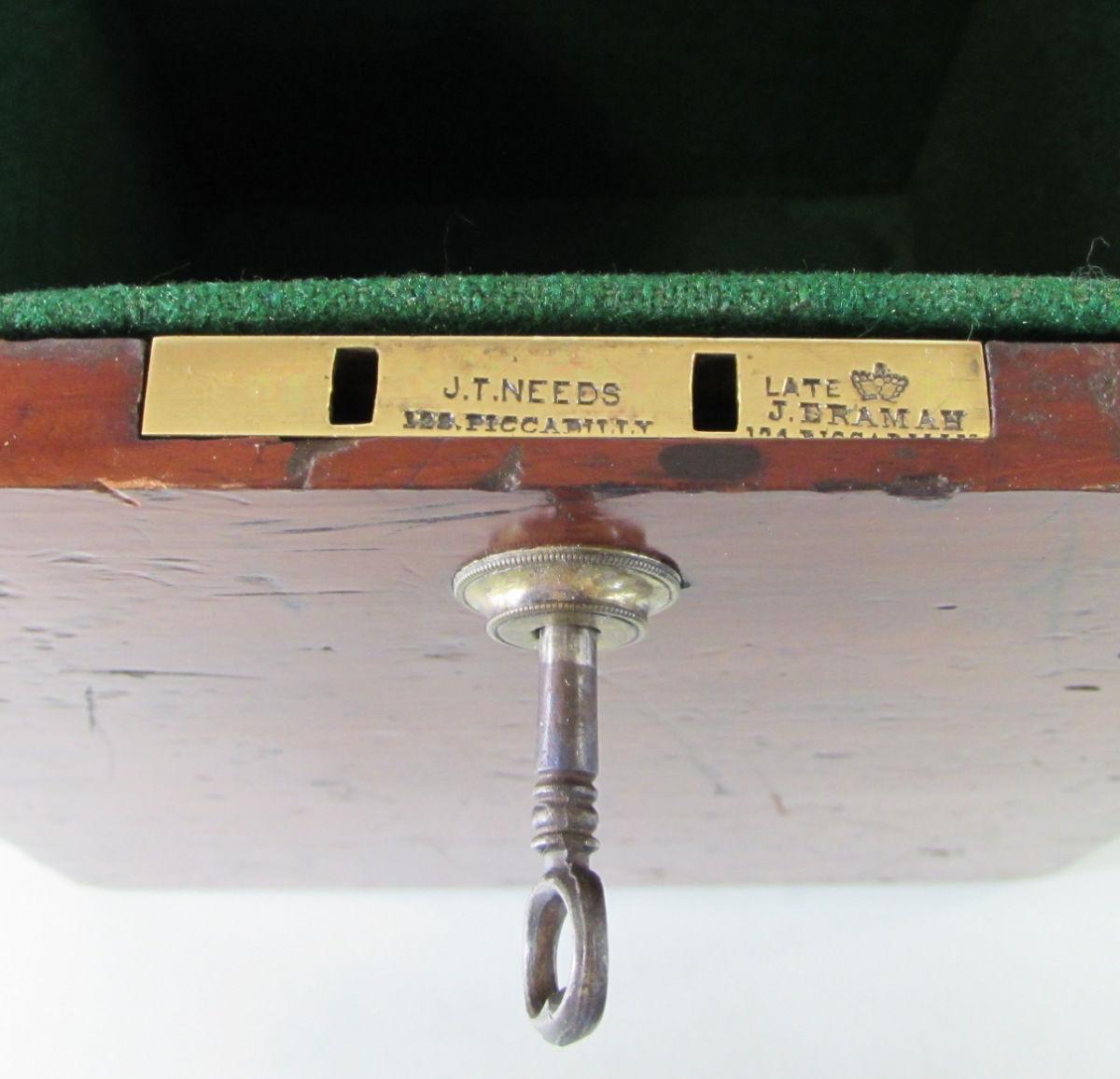 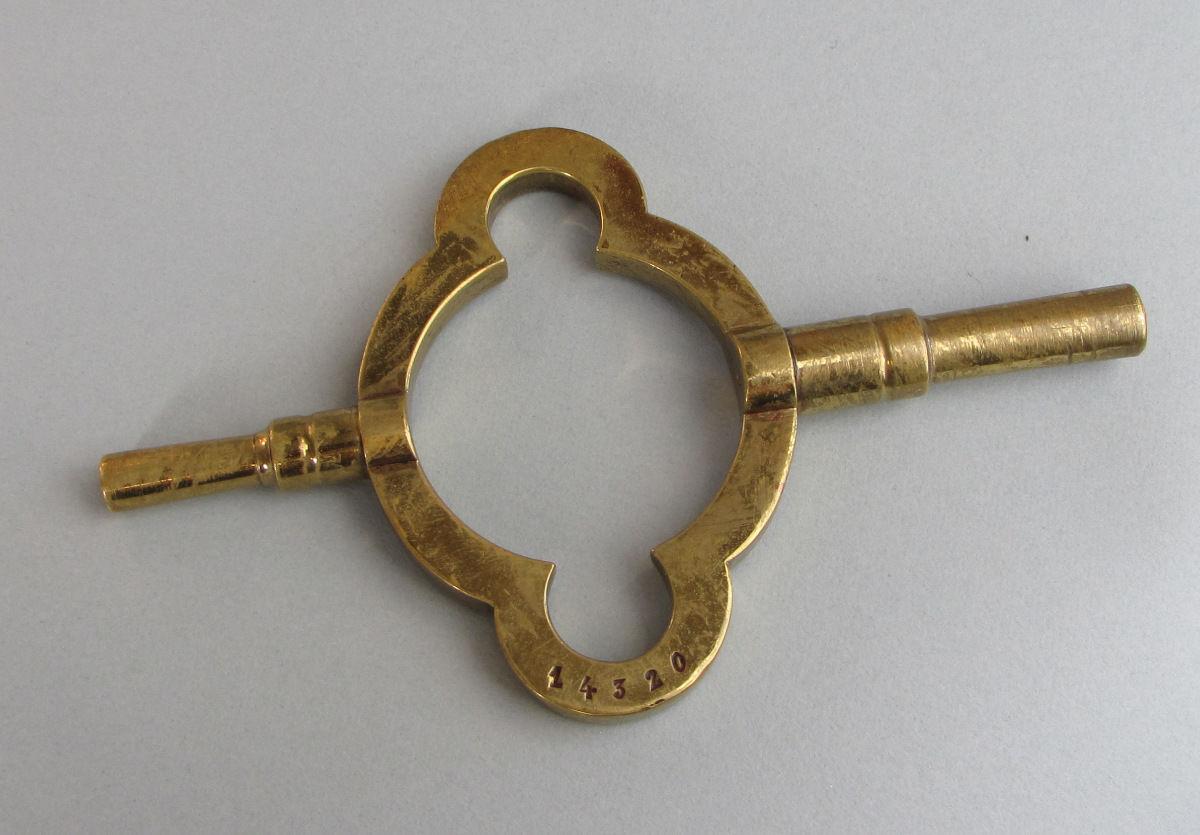 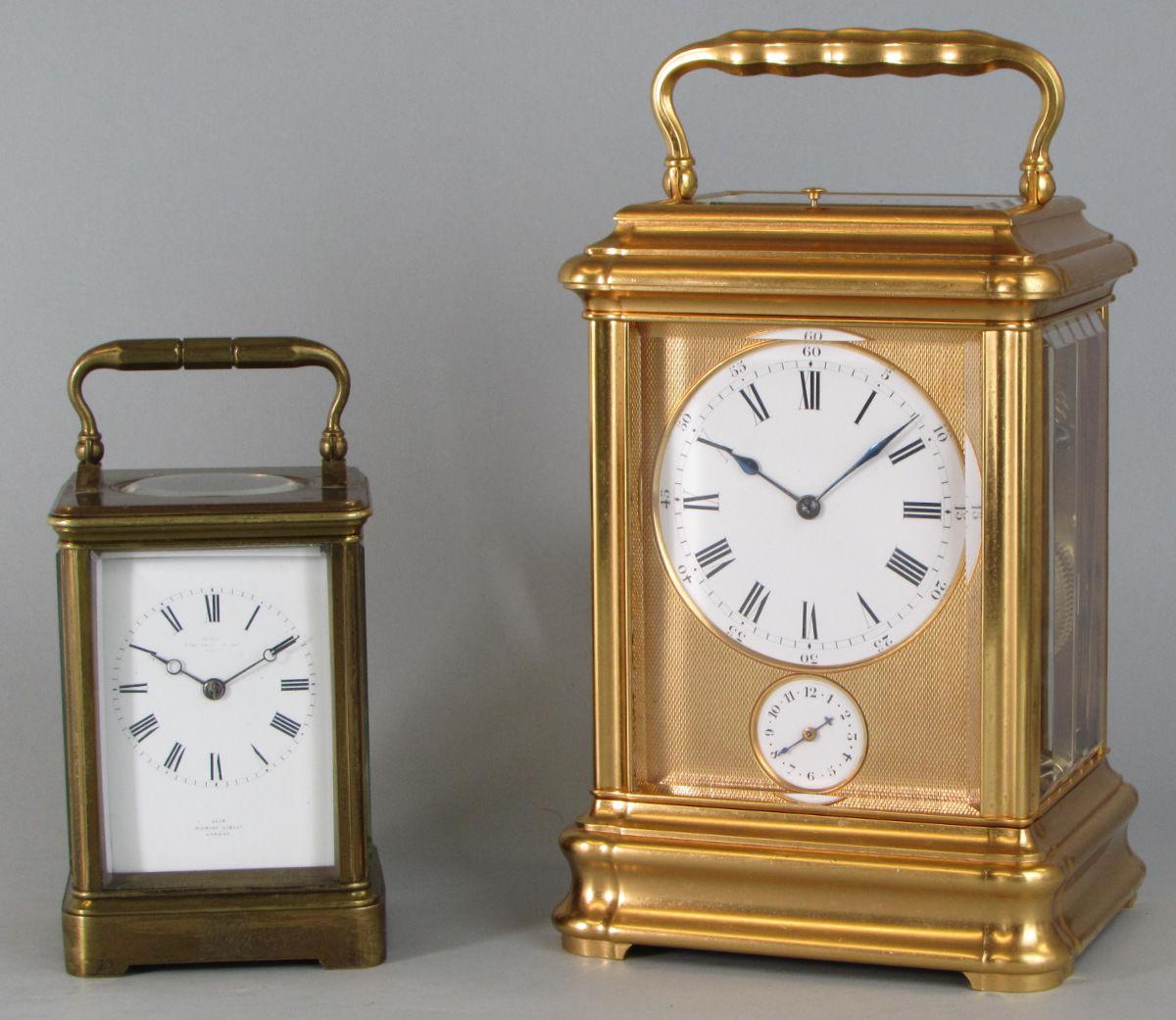 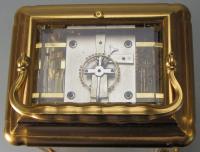 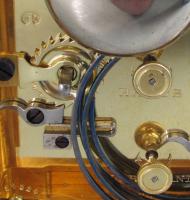 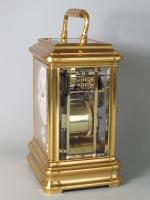 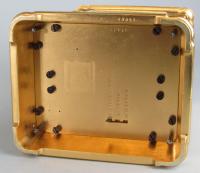 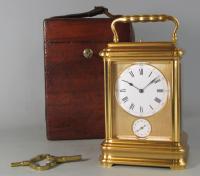 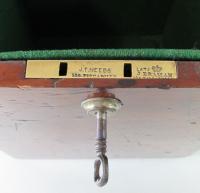 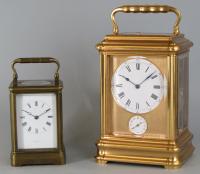 The eight-day duration movement has a large silvered platform lever escapement and strikes the hours and quarters on two gongs at each quarter for grande-sonnerie strike; or with the hours and half-hour on a gong with quarters on repeat for petite-sonnerie, with the alarm sounding on a further bell. To the underside of the case is a lever allowing for the full striking, quarter striking or silent. The backplate is stamped with the Drocourt trademark along with the serial number 14320, with the gong block stamped F.D. for the gong maker along with the actual musical notes stamped to the block sides; C & G. The inside of the plates are stamped with the roulant blanc serial number 521 along with a further Drocourt trademark, an oval with the wording Drocourt Paris Fnt (Fnt being fabricant or maker).

The white enamel dial has black Roman hour numerals, Arabic five minute markings and blued steel spade hands typical of the style used by Drocourt on his giant clocks, with a subsidiary alarm dial and an engraved engine-turned gilded mask.

The giant Gorge case has a five-bail handle and is finished in a satin gilt.

Complete with the original large winding key stamped with a repeat of the serial number 14320.

The substantial wooden box was obviously made for this clock when originally sold and is reminiscent of those made for the English carriage clocks of the period and has a lock stamped J.T. Needs, 128 Piccadilly. Late J. Bramah, 124 Piccadilly. Needs was known to be in Down Street, London in 1871 but by 1875 had moved to 128, Piccadilly which would correspond with the dating of this clock as made in circa 1876/77.

A label to the underside of the wooden case gives details of the previous owner: The Jack Henley Collection, Inventory 193 EC. Jack Henley is a well-known haulier being a keen collector of rare cars as well as carriage clocks. It is known that he would only purchase clocks for his collection that came with their original travelling cases as in this example.