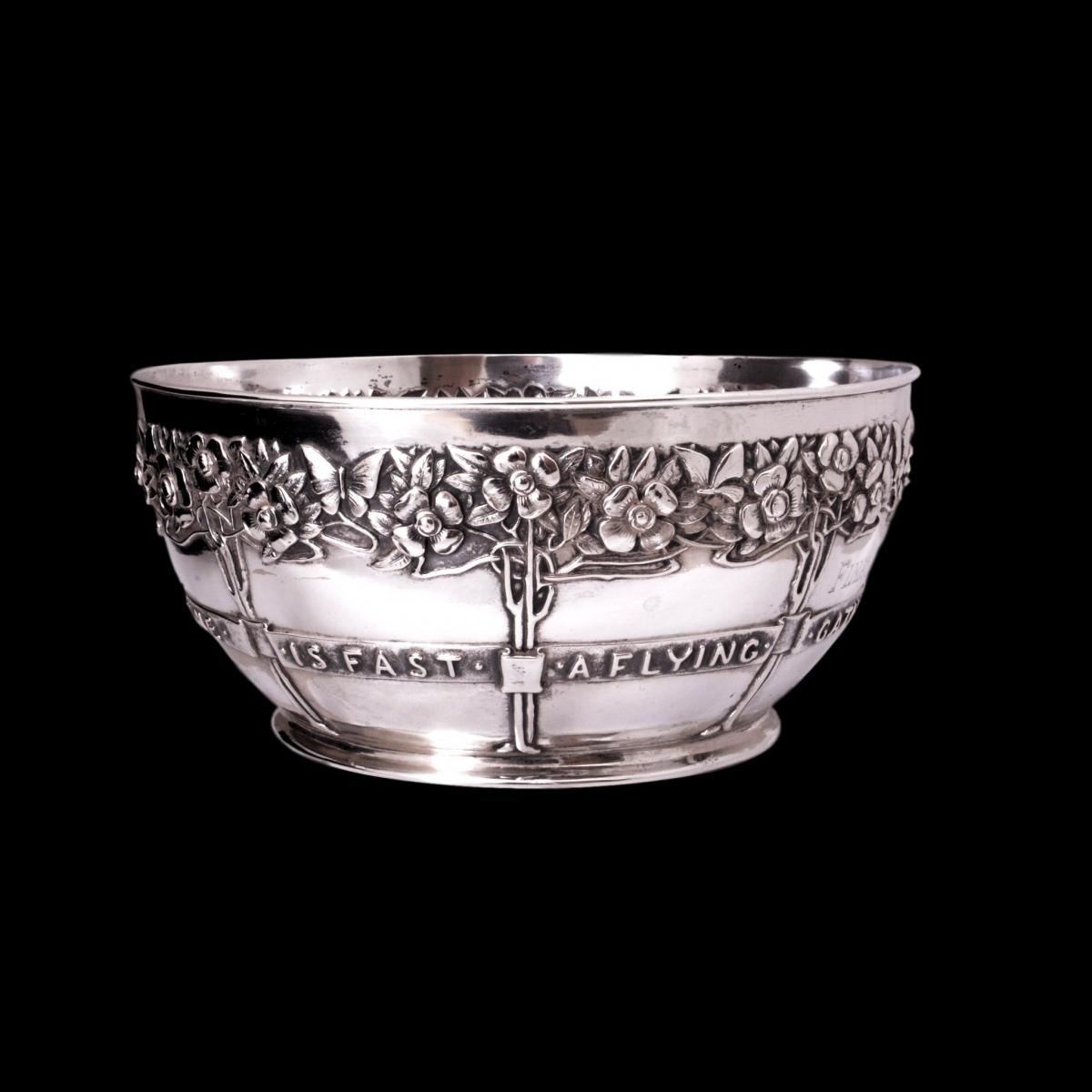 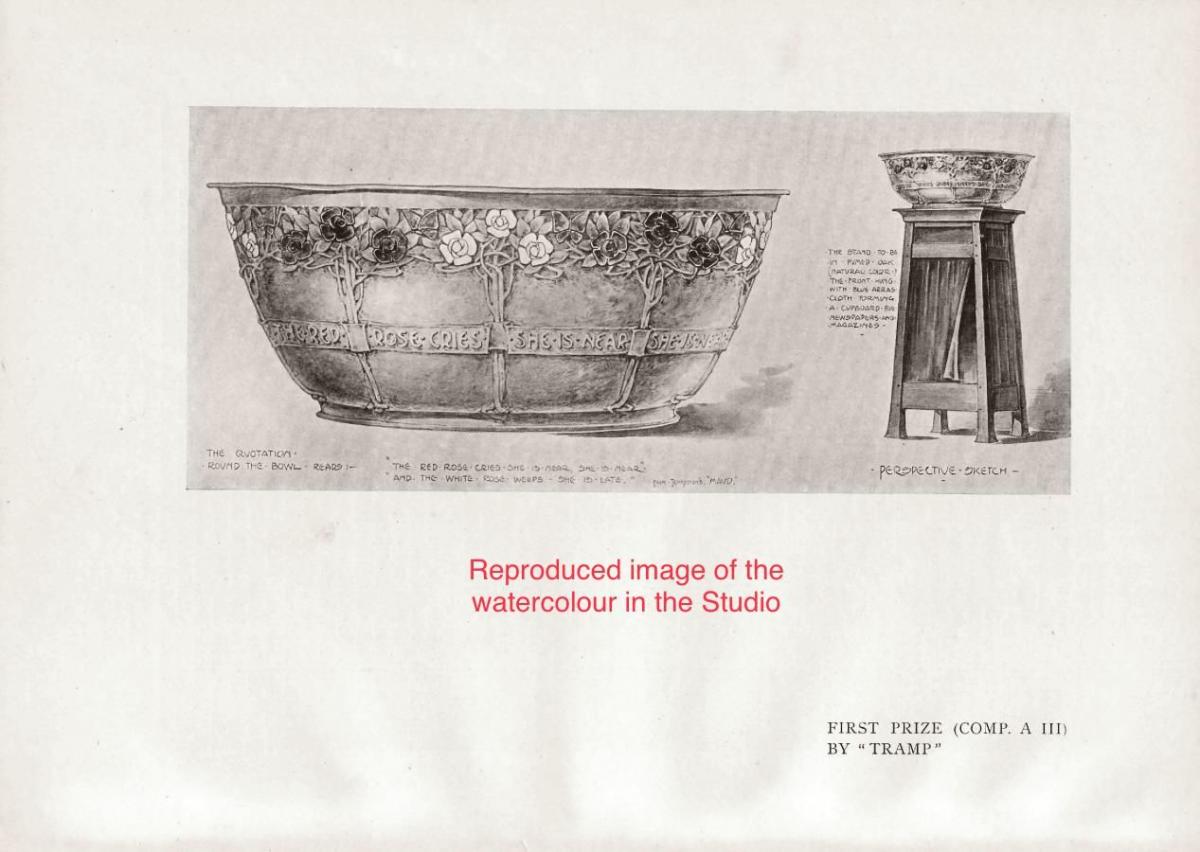 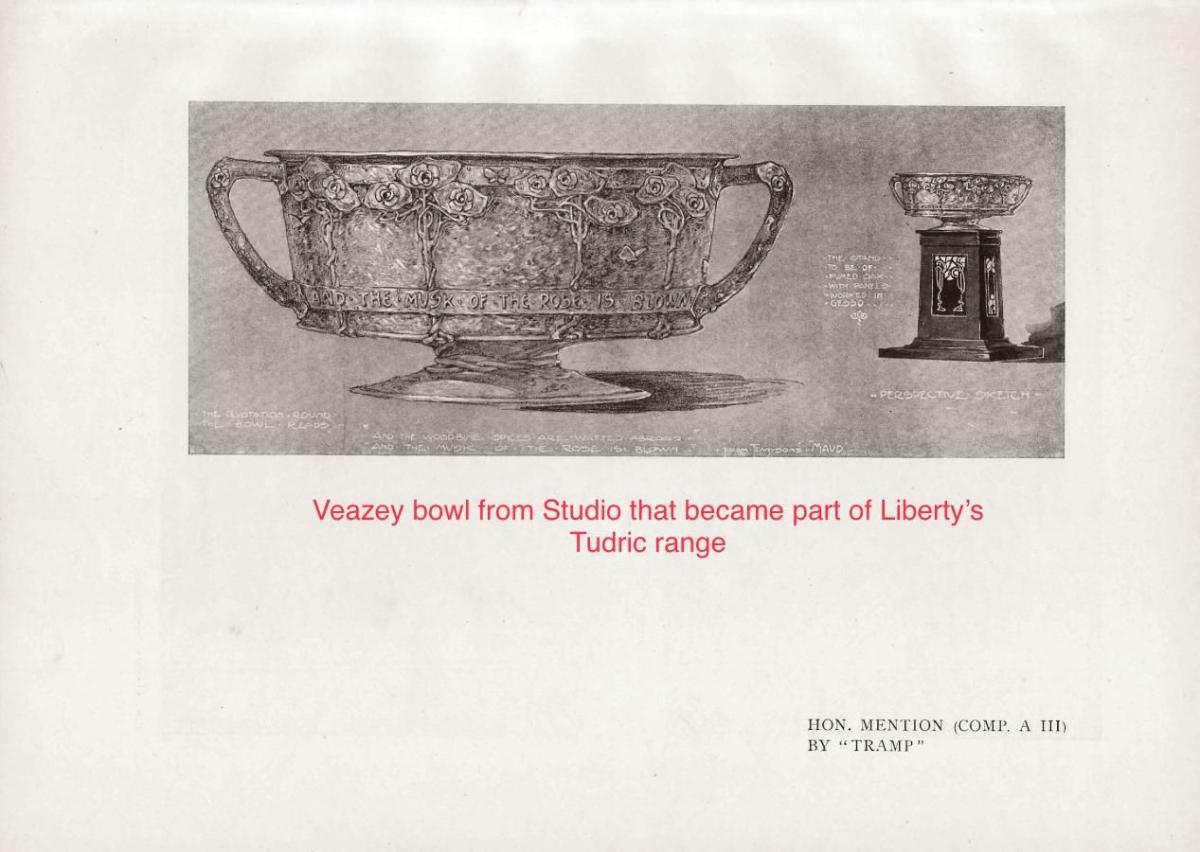 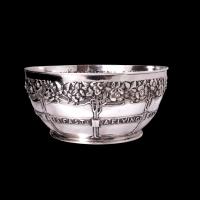 There is so much to say about this sterling silver rose bowl it is hard to know where to begin.

Starting with its aesthetic, the provenance is below. This large solid silver rose bowl (not plated) has maximum diameter 24cm.  Using the repousse technique of hammering the silver out from the underside, a complex design of intertwining wild roses with butterflies covers the body of the bowl. It is inscribed with the verse “Gather ye rosebuds while ye may, Old Time is still a-flying” from  the poem “To the Virgins, to Make Much of Time” by Robert Herrick, 1591 – 1674. It is a perfect romantic arts and crafts piece with great prescence.

The provenance is equally fascinating. The design for this bowl is by “Tramp”, the pseudonym of David Veazey, a well known metal work designer who designed for Liberty & Co’s Cymric range c 1900-1906. This design, with enamel and a different inscription from Tennyson’s Maud, won first prize in the Studio’s 1901 competition for a rose bowl.  The design was published in the Studio, Volume 22 March 1901, page 140. The image published was reproduced from the original water colour that has been retained with the bowl and will be included with its sale – see images.In the same competition “Tramp” / Veazey won a commendation for another rose bowl, also reproduced in the same Studio Journal edition, on page 141. This design was acquired by Liberty and became a very popular piece in its Tudric pewter range.

As far as known, the winning design for the rose bowl was not produced by Liberty in silver or pewter. It is possible this piece is an unmarked Haseler/Liberty prototype that, perhaps due to its cost/complexity of production, was never produced.

That said, I presume the bowl to be a one off commissioned by Veazey, the maker unknown. That it has remained with the original water colour suggests it is a family piece.  It is unmarked but engraved “Fine Arts 1906”. This may indicate it was given as a prize or exhibited in 1906. It has been acquired, via auction, from a private collection which held it for nearly twenty years.

For more information on Veazey please see my article published in the Archibald Knox Society Journal, 2015 by clicking this link.