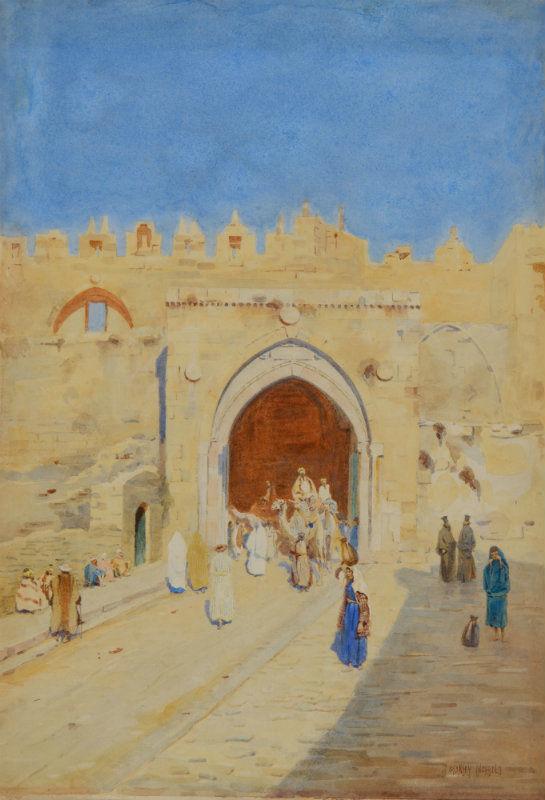 Stanley Inchbold studied art under Sir Hubert von Herkomer. He exhibited at leading London galleries from 1884, namely at the Royal Academy and New Watercolour Society, and was also a member of the Royal Society of British Artists. He became a skilled landscape painter in both watercolour and oil, and travelled to paint all over Europe, America and North Africa.

During the first twenty years of the twentieth century he produced many beautiful book illustrations and illustrated A.C. Inchbold's - Under the Syrian Sun (1906) and Lisbon and Cintra (1907). Other publications included A Beckett, The Spirit of the Downs (1909) and G.N. Whittingham The Home of Fadeless Splendour (1921).

In The Literary World, 1906 Inchbold’s work was praised, ‘We do not remember to have seen before any such attempt as Mr. Inchbold makes to represent the wonderful variety of continually changing colour that is peculiar to the Holy Lands. Though these watercolours have their purely artistic value, they are specially interesting because of the vivid and sympathetic way in which they represent the cities and landscape of Palestine’.

This is one of the most beautiful and impressive gates among the gates of the wall of Jerusalem, which was built under Sultan Suleiman the Magnificent. This is a central gate in the wall which faces north towards Nablus and Damascus.

In Arabic it is called “Bab El Amud” (“the gate of the pillar”), probably after the pillar that stood at the centre of the gate’s courtyard during the Romano-Byzantine era. Turban-like decorations decorate the gate, and due to its importance, many observations points and guard towers were built there.

During the Roman era, a stone-paved courtyard was added and at its centre stood the statue of the emperor. Two streets started from this courtyard, leading towards the south.

To this day, two main streets split from Damascus Gate, preserving the Roman structure of this area: the right street is the Khan A- Zeit or Beit Habad street, and the left street is El Wad Street- or Hagai, commercial streets that cross the city from north to south.